Photography: Professional Pics of your Minis..

I've been meaning to get to this for a while. I searchy-ed this, but didn't find anything. I've seen too many great minis completely ruined due to horrendous pictures of said mini. So, with that in mind, this will be a two-part tutorial. First, I'll offer some tips on taking great pics. Second, I'll show you how to clean up those pics in Photoshop.

Now that you have a pic of your mini, it is time to Photoshop the little devil.

We're going to start with Killy's UM Apothecary. Why? Because I just fixed it earlier for him. :-) 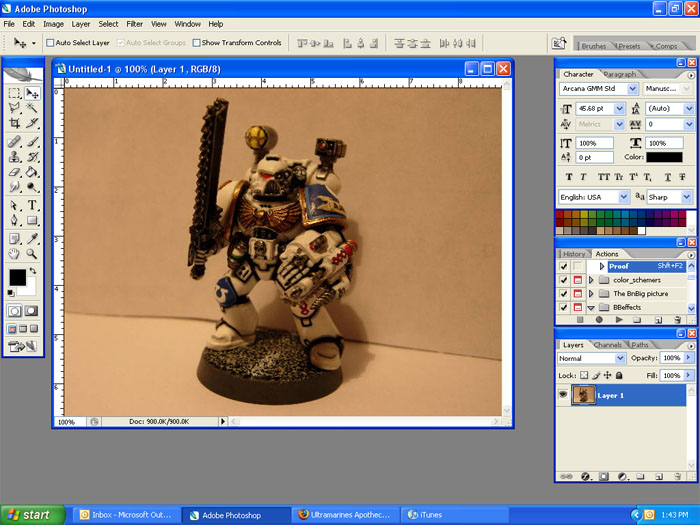 Next, I'm going to use one of my favorite Photoshop tools: Color Balance. Now, I could play with the different levels until I get what I want...but Photoshop allows me to be lazy and will color balance the photo for me. You may not always get the results you want, but doing an AutoColorBalance will help you see where you need to go and then you can go in manually and adjust the image: 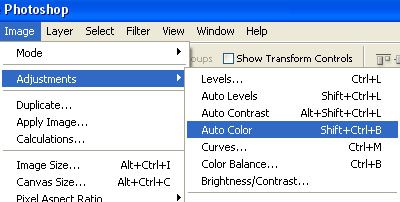 Alternatively, you can just hit Shift+Ctrl+B 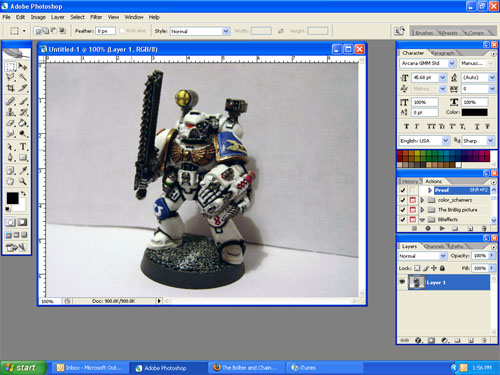 Next, I'm going to use my Levels to adjust the Highlights, Midtones, and Shading of the mini (Image > Adjustment > Levels or Ctrl+L). You really just need to play with each slider to get where you want. Uncheck/check the preview box to see your original: 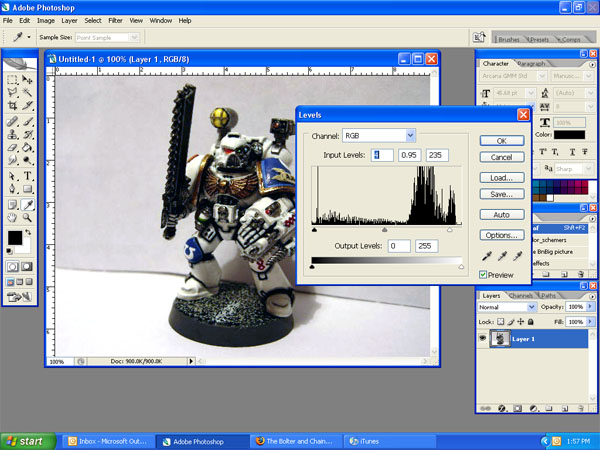 Finally, let's crop the image to really draw focus to the mini. Grab your marquee selection tool (pictured) or just hit M and draw your selection. Then click Image > Crop. 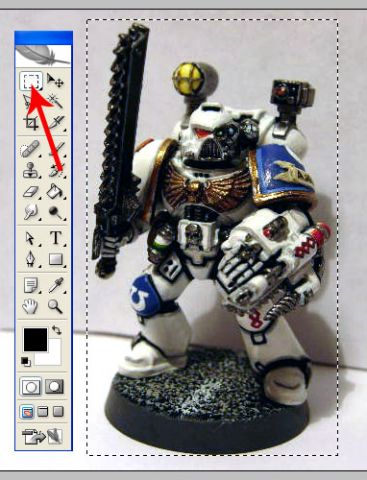 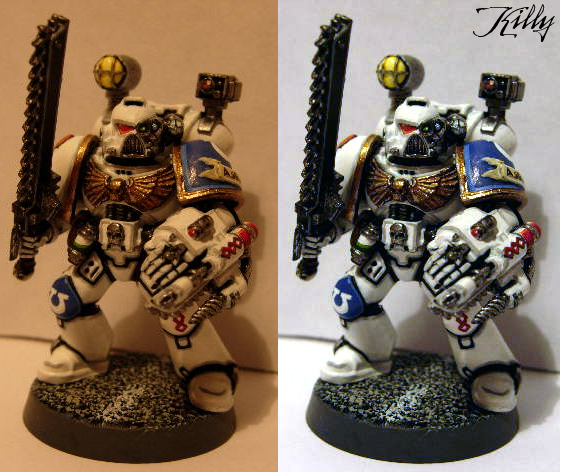 Above is the before/after shot.

Got a blurry photo? Camera isn't doing so well? Try these quick fixes:

I've compiled a few different ways to enhance your beloved mini-picture with photoshop. They are not foolproof and do take some tinkering to perfect, but it is better than nothing! 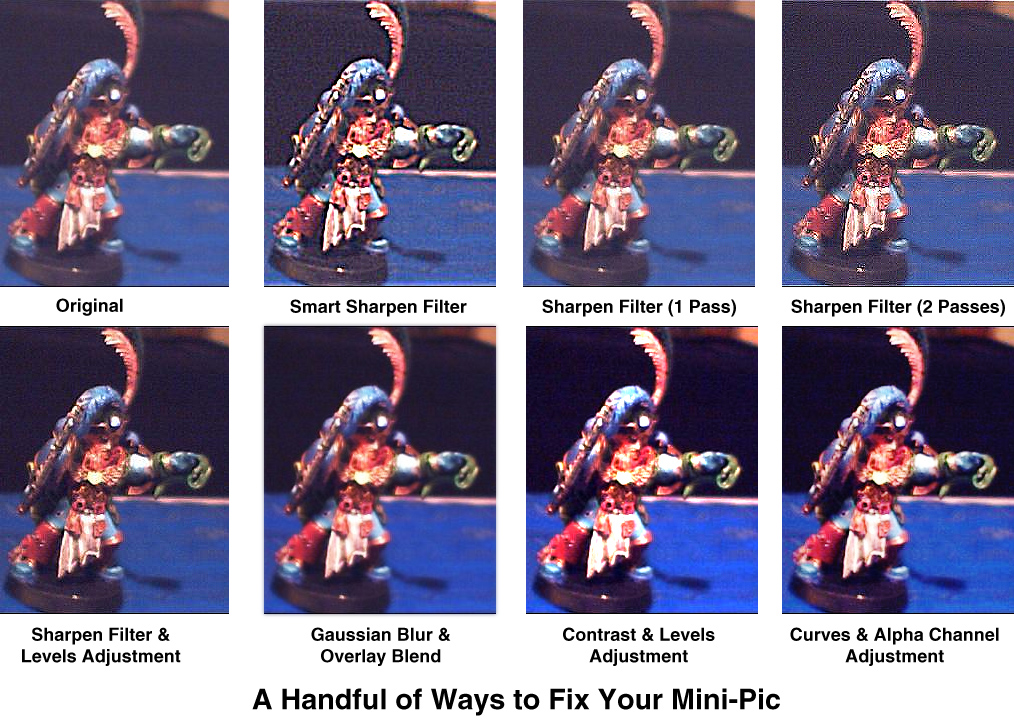 I hope this helps people. Post your suggestions below and I will add them to this post. Let me know if anyone needs any help!

How can i send a pic of my Char for you to fix up like that? O.o

Im not one of those guys who lies about my win record.

I see myself five years from now, homeless, sleeping on the streets on GW foam, drinking paint water, and slowly dying from my failing lungs. Damn resin.

excellent post! thanks much, I'll be setting up my picture box soon. heh.

thanks man, this should be a huge help!

This is quite a tutorial. I can tell you this is not what I was expecting when I went in. Very nice. Once I get a comp that can support more than the internet, I think that I will look into this.

Chaos Bikers, unsafe at any speed!

Nothing says "These twenty-four inches are MINE!" like a Vindicator.

There is a fine line between "hobby" and "mental illness"

Hot damn! I wish Id looked for something like this. It took me about an hour of solid experimenting to work out for myself the best way to take pics... Some sound advice.

I just thought Id also add something that I've found...

If you cant find any better lighting sources, and have to use the flash, then it should be done from about 36" away, with a surface behind it that is not reflective in any way (any of you who remember my 'necron vs marine' duel will remember the flash incident...). If you have to do this, then it will work better if the camera is resting on a flat surface, because that that distance a wobble will ruin the picture 9 times out of 10. It does however limit how 'dramatic' your camera angles are. Using the flash usually gives a brighter finish though, so you often dont need to edit the images after to set the colors straight.

Hopefully that helps anyone who is looking for a quick method of taking half decent photos.

In an hour of Darkness a blind man is the best guide. In an age of insanity look to the madman to show the way.

Kanazuchi, I salute you! Great tutorial, Il use this to great effect:)

with the freedom we have, we spend it copying others.

If you want to get rid of a lot of that yellow, set up your "white balance" on your camera for incandescant light.

Most cameras think that they're outside and so filter out a lot of the blue light. Artificial lighting however doesn't have as much blue... so the pics turn out yellow.

Cheers on the Pshop tutorial!

I use a similiar method:

Similar? I would say that is identical other than the contrast step and the order in which you do yours. But yeah, it is pretty foolproof.

I should write an action for people so they can do this automatically. Just a press of the button and it will go through all the steps for you. Anyone interested?

Thanks for a very simple but effective guide to taking and producing great photo's, a must for the would be coolminiornot goer. In the image I cleaned I found that there is also a very simple and effective way to make the image pop, just by adding a gradient to the background layer and using the bucket tool to (clear) the background in level 1 made for a nice image. Good work there buddy.

This is why I don't play Tau. They wear Komino's, fruity blue aliens.
http://i17.photobuck...ahahahahaha.jpg
Over-sized image turned into a link. Please refer to the forum rules for guidelines on images in signatures. -Brother Tyler

When you say "used the bucket" to clear the layer, what do you mean? If you are talking about cutting out a miniature to put on a new background, the most effective way is definitely the use of the pen tool. Baring that, a quick mask works wanders. Perhaps I should make a tutorial on that.

This excellent tutorial has also been added to the Librarium. Thanks to Kanazuchi for the submission and look for his second Photoshop tutorial article coming soon!