The Sons of Medusa

181 replies to this topic

Grey Death, you got any more of these guys finished? Ya havent been around in a while

I know, I know! It's been FAR too long since I've updated with ANY progress for this project! But for good reason. I quickly realized painting this color of green by hand was going to burst the little bubble that I call sanity in a matter of a few models if I didn't find a better method! So I decided it was time to find a proper spray! And boy did I ever hit the gold mine!!

PS-8 Light Green Spray from Tamiya works WONDERFULLY as a basecoat for the Sons of Medusa!

Here are my results after applying it over a white primer and giving it a wash of Thraka Green:

That's awesome. I'm interested in seeing how easy it'll be to get a good white off the green, though.

Wow! my eyeballs almost melted when I saw the green, but you have done a great job! Some solid highlighting and great shading have really made these pop. Look forward to seeing the whole force!

That green is awesome...

Even a man who has nothing can still offer his life.

Hey guys, thanks for the replies

. It's always a good driving force when folks like what you're working on!

Commissar, getting white shouldn't be too big an issue. I'm going to be working up from a black and grey base for it like I did with my Grey Death Marines.

A long while back, a friend of mine handed over his entire army, tanks and all. I never did much with them, but yesterday I decided it was high time I did! So I started salvage work! It took a while to get everything to working order and in the configuration that I wanted it all, but it's good to go now! 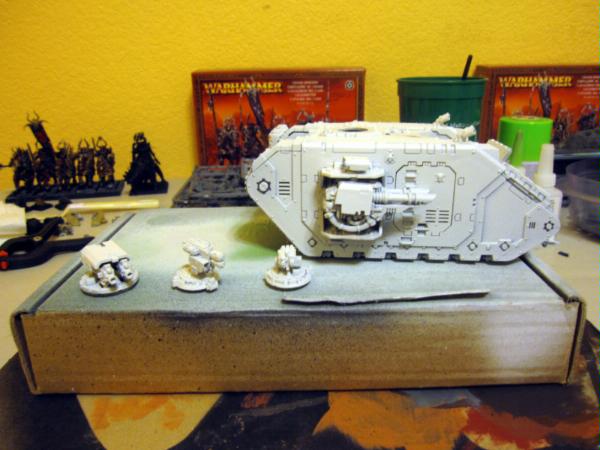 The 'big' project for this was an automated multimelta turret which is built from an attack bike metal bit and a HK launcher bit. All in all I'm VERY happy with how it came out. Expect an updated 'Green' for this one ^_-. 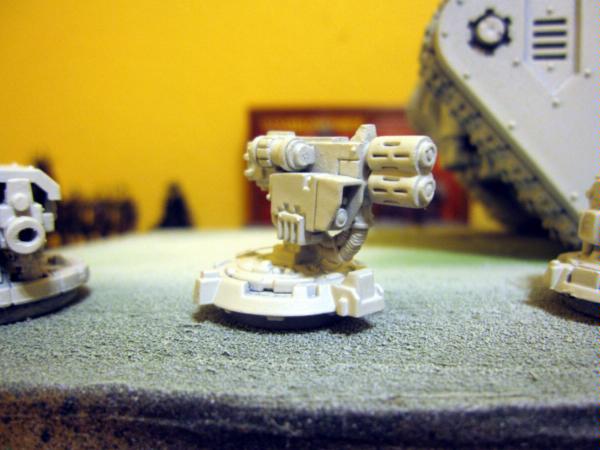 I'm looking forward to more progress on your army, Grey. Hopefully you can keep up some momentum on this project, as I've always enjoyed your crisp style of painting power armor.

Grey You best be writing up a tutorial about how to paint the sons when they are completed.

Hey all, thanks for the comments

Did you used the Tamiya spray again?

My Work on Photobucket

Very nice stuff.... I had a look at this thread as its so rare for people to do brightly coloured marines that look nice but you sure pulled it off here. Good going.

Awesome, I really like how your simple and effective approach created such a vivid shade of gren.

love how it turned out out. you get an Exsellsior Purity Seal!! anyways ill be checking back often to see your progress.

Nice. So are you planning on playing the BFG space battles with the Sons of Medusa and then transferring the planet battles to the tabletop version of 40k?

aaaah my eyes the goggles do nothing!
Sorry couldnt help myself, the effects of sleep deprivation

They're looking good, very bright but nice and clean.
The Barge looks amazing!

looks fantastic Grey_Death, really nice green and i like the choice of a white head to break scheme up. the BB looks good too, although i wonder if it would be worth doing the same thing on it, i.e. add some white somewhere (maybe the large flat areas on the side either front or back?) to tone the green down a tad? (same thing for the Raider, although thats obviously only base coated atm anyway)
just a thought, feel free to ignore me, still looks awesome!

Darth, I'm really not too certain on the final decisions just yet as to how much the games will be integrated for BFG and 40k. I know there will be some instances where things will go from one game to the other though, such as boarding actions. At least that was the last thing I had heard on the subject. Even if there is zero integration, it gave me a good excuse to pick up a great new game

Dark, It's more than alright

I feel the same way when I look at them. They're beautiful in their glaring and eye ripping green though. I <3 them.

Strike, I thought the same thing, but honestly, the green isn't as 'vivid' in person on this piece to me. I think the photos are throwing the color off a bit. Maybe some photos with some better lighting (and not yellow walls in the room >.>) could help. With the raider, it should get some additional white detailing, but I still plan to keep it mostly green. Though my weathering will be much more extensive on it so the color will be toned down some and desaturated.

Non-photo worthy progress today. Have 9 more marines in white prime stage. They should get the green treatment tomorrow night sometime. That is unless I run out of the green x.x...need to head up to the hobby shop and order some more.