Some of you may remember the last lot, completed in the middle of moving house and settling in to a new job, consisting of 2 AoBR Tactical Squads and a 5-man Terminator Squad.

Well, this year I'm cutting back a little bit so the full list is as follows:

Some have been undercoated, and I will admit the Company Champion has his first layer of yellow on the armour, but I figure he's not too far along when added to the others.
(pic containing the Terms, Command Squad and Lascannon marines - tac squad are off sprues but in a big bag with a load of other bits so I'll find them this weekend)

Onwards, onwards to victory or ignomy! 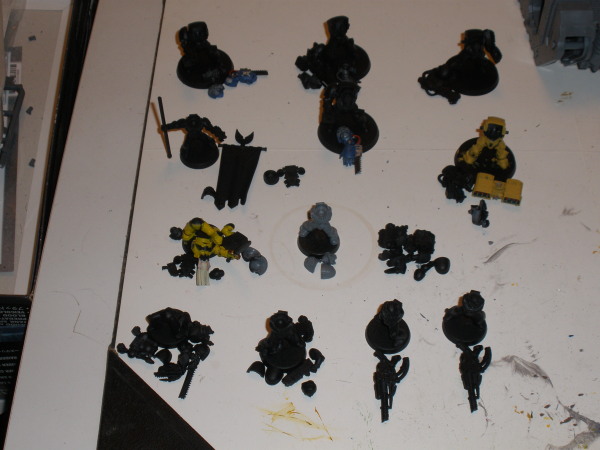 Proud member of the IF forum <THE PHALANX> : Philip_the_Great

"Raise the flag high. Let those degenerates know who comes to claim their lives this day!"- Sergeant Adar Geronan, Imperial Fists 4th Company
'The Imperial Fists and their successors have been instrumental in holding the Imperium together through the bleakest of times. Several Chapters have been formed from the gene-seed of the Imperial Fists, each as famously stubborn as its progenitor. These Chapters, the Crimson Fists and Black Templars amongst them, form a tightly knit brotherhood of Space Marines, united by blood and the honour of their sacred Primarch.'- Space Marines 5th Codex

Termies - mostly painted. Could use them on TT as they are, but I want to do a bit more to them before I start sticking bits together: 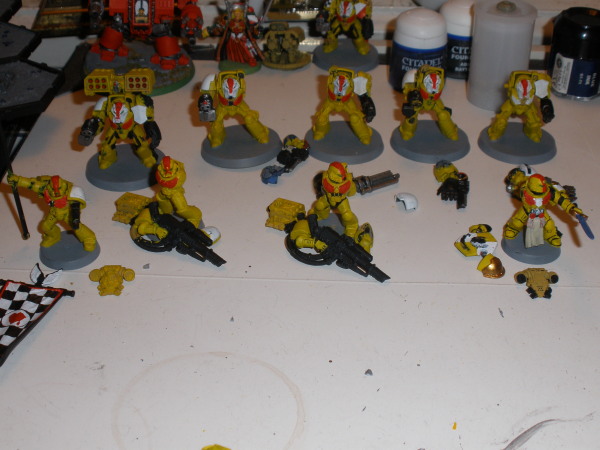 then we have the other 3 command squad guys: 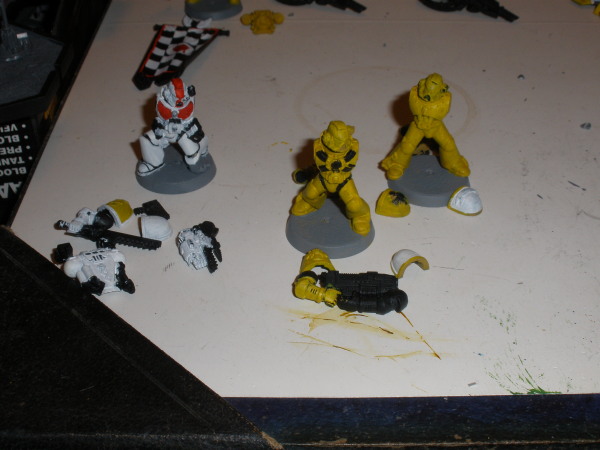 medic on one knee, plasma gunner, and another marine (still no idea, but probably will get a plas if i can find a spare)

and then finally the grunts: 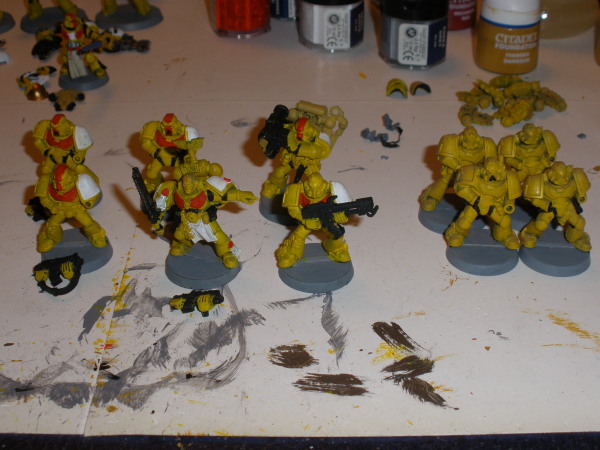 These guys are the ones who are least finished. 4 are still only undercoated, but they shouldnt take too long to get ready. As these guys are unliley to get used in anything short of Apoc, I'm not actually too fussed about them being perfect at the moment (the other 2 squads I've already got done are more than I'll be needing for a Lamenters army for a while I think).

Now all i've got to do is get these guys done by the end of the month and get to the wedding on time.

Just a quickie as I really need to get ready for wedding.

Mariens painted - all checked shoulders done, a few bolters could do with boltgun metal on them and second plasma-gunner in command squad is currently holding a bolter as a place-holder (didnt have the funds to aquire another plasmagun in time sadly). 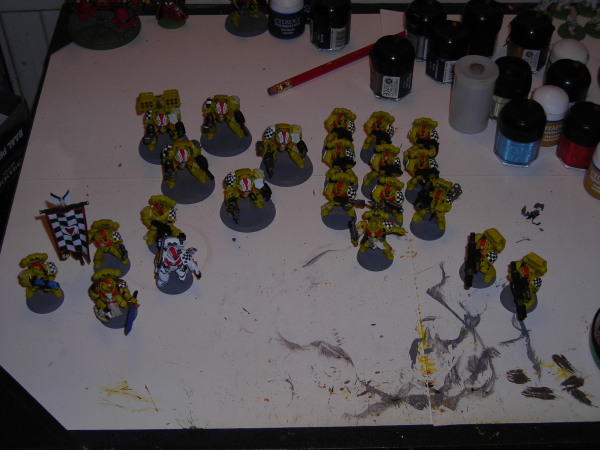 I'll try and put up some better pics when I'm back on Friday. 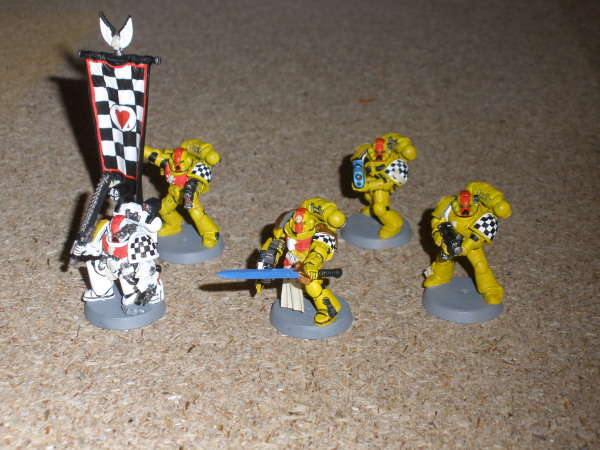 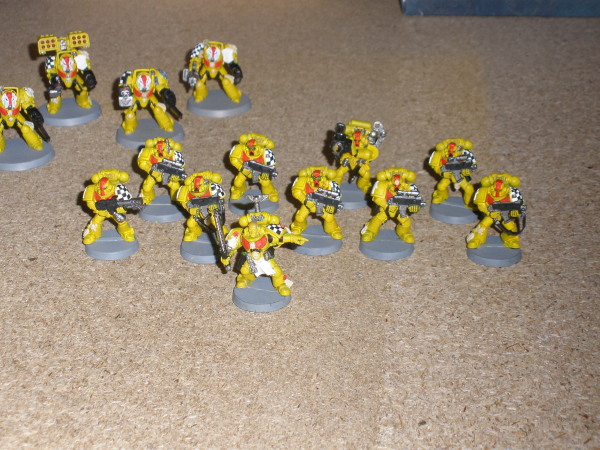 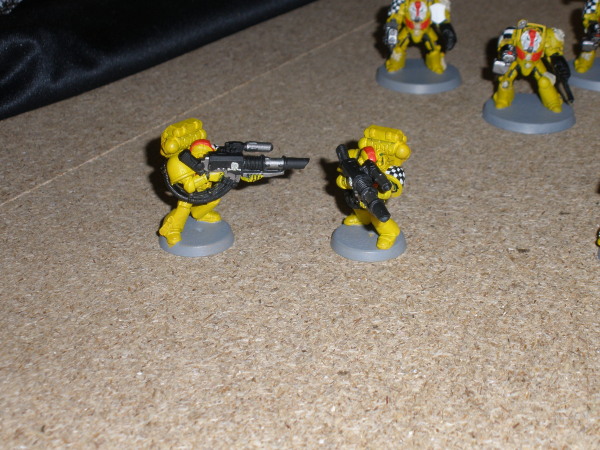 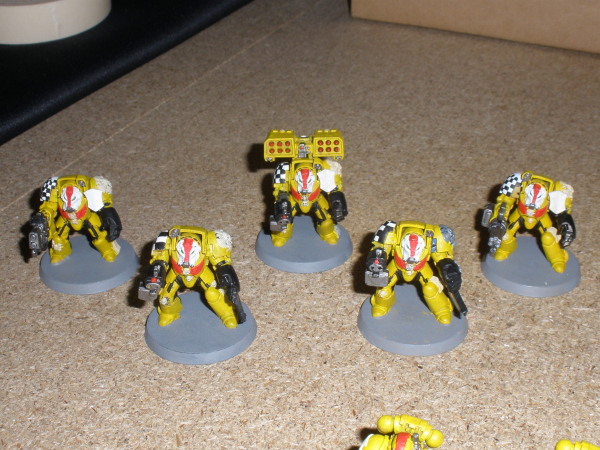 "Fear me, for I am YELLOW!" (includes next couple of painting projects on the right-hand side) 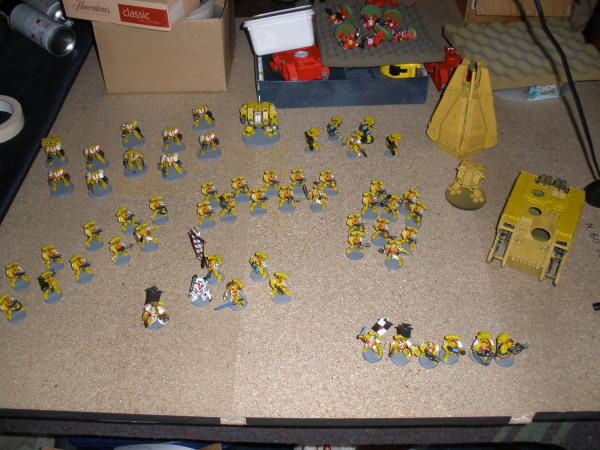 Looking good, tell me how you did the checkers on the pads? And how large do you think these Lamentors force to be? 1850?

The overall yellow scheme is a bit bright for Lamentors, but still some mad painting skill there.

hey bob you have a fly on your shoulder! don't move I'll shout it!

Take the Magic: The Gathering 'What Color Are You?' Quiz.
Back to + WORKS IN PROGRESS +