Duel to the Death

82 replies to this topic

No bikes, jump packs, or the equivalent (just to keep things easy)

Q: is a Steed of Slaanesh allowed?

No steeds allowed. It's okay to submit an image of a model on a Steed of Slaanesh, though (we'll just consider it an archive image and that character won't actually have the steed for purposes of the battles).

Wait till our daemon players bring out the chariots.

QUOTE (Dan The Deamon @ Mar 9 2010, 07:12 PM) <{POST_SNAPBACK}>
What's that team who's set up to loose against the Harlem globetrotters? I feel like we're playing the "bad guy" codex and we only exist to give all the new Space marine players some entertainment.

Though I'm thankful that the Nun with a Gun doesn't have the Hairdryer of Doom™ that allowed the last user to dominate a past AoD...

I have always maintained that point-for-point, a properly kitted out Canoness is the single deadliest model in all of 40K. I have seen her stand up to just about everything -- including a swarmlord -- and come out on top. She's the real model to fear....

Besides, true believers of the Emperor need not fear the wrath of the Ecclesiarchy and the Inquisition! Guess that makes all y'all heretics or something... *grins*

Is this per player turn? It won't affect me, just wondering.

Is this per player turn? It won't affect me, just wondering.

I thought it was str6 or insta-kill. Str 8 is much nicer.

And are there no Ultramarines with enough Courage and Honour to take the field?
Im suprised I don't see any Relic Blade/Stormshield Ultra Captains

He's still got a bolter, so all fine and dandy, can't carry too many guns can he

That said, my gun's bigger

Brother-Captain Ismarius - Master of the Navy
Captain of the Third, Brother-Captain Ismarius has served with distinction for decennia, leading his Company through the baptismal fires of war. It was he who fought in the Chapter's name on Medusa V, where he was able to defeat the Eldar forces of Saim Hann and retrieve several pieces of an alien artifact for study by the Ordo Xenos. Though he himself was struck down by an Eldar blade he would fight again and with renewed vigour, till the day of his appointed incarceration in the Dreadnought Sarcophagus Furia (Fury).
As Captain of the Third he has considerable Naval forces at his disposal, especially as the Chapter follows the tenets and beliefs laid down by their Primogenator, Dorn, the Tenacious, they are a space-faring Chapter. 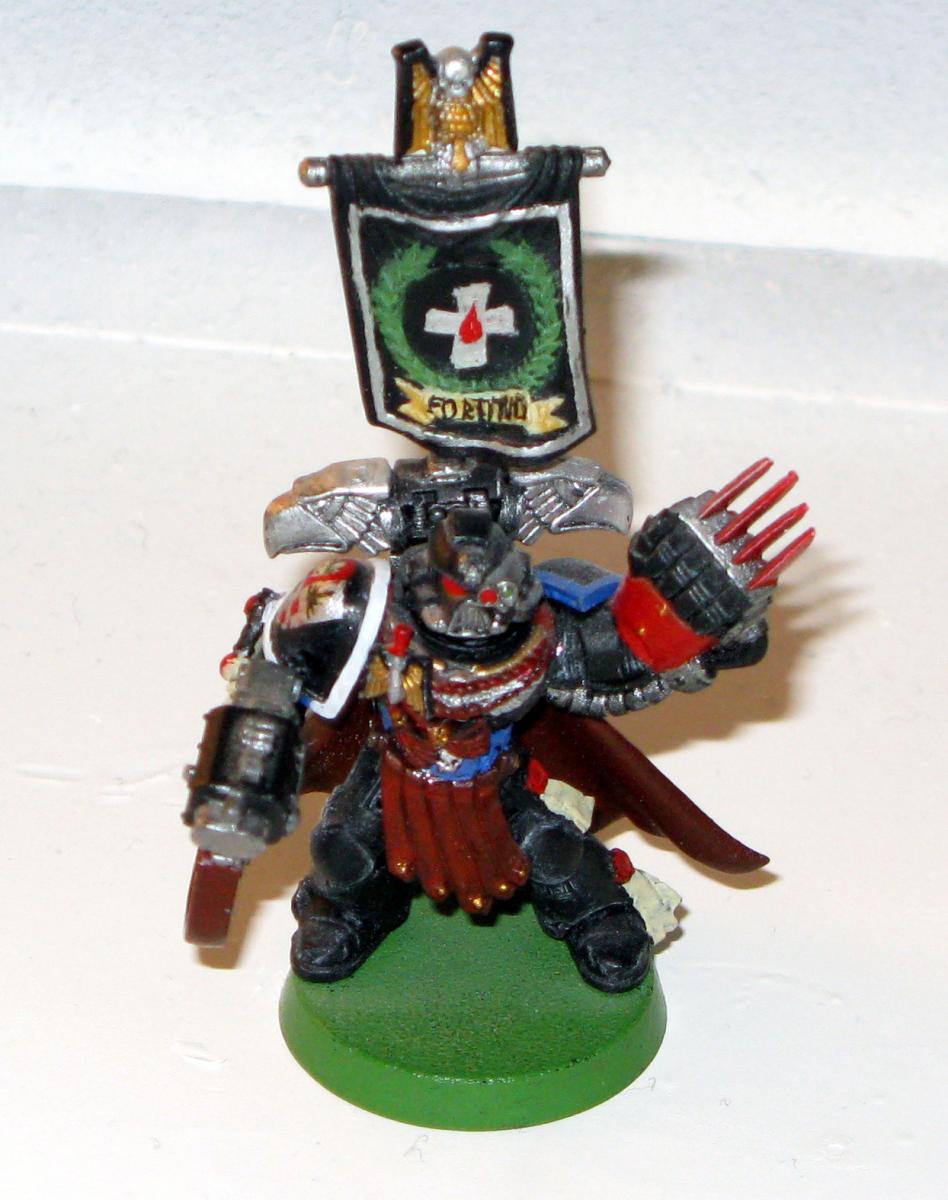 He will join the Librarium in their fight!
Knowledge is power, guard it well. 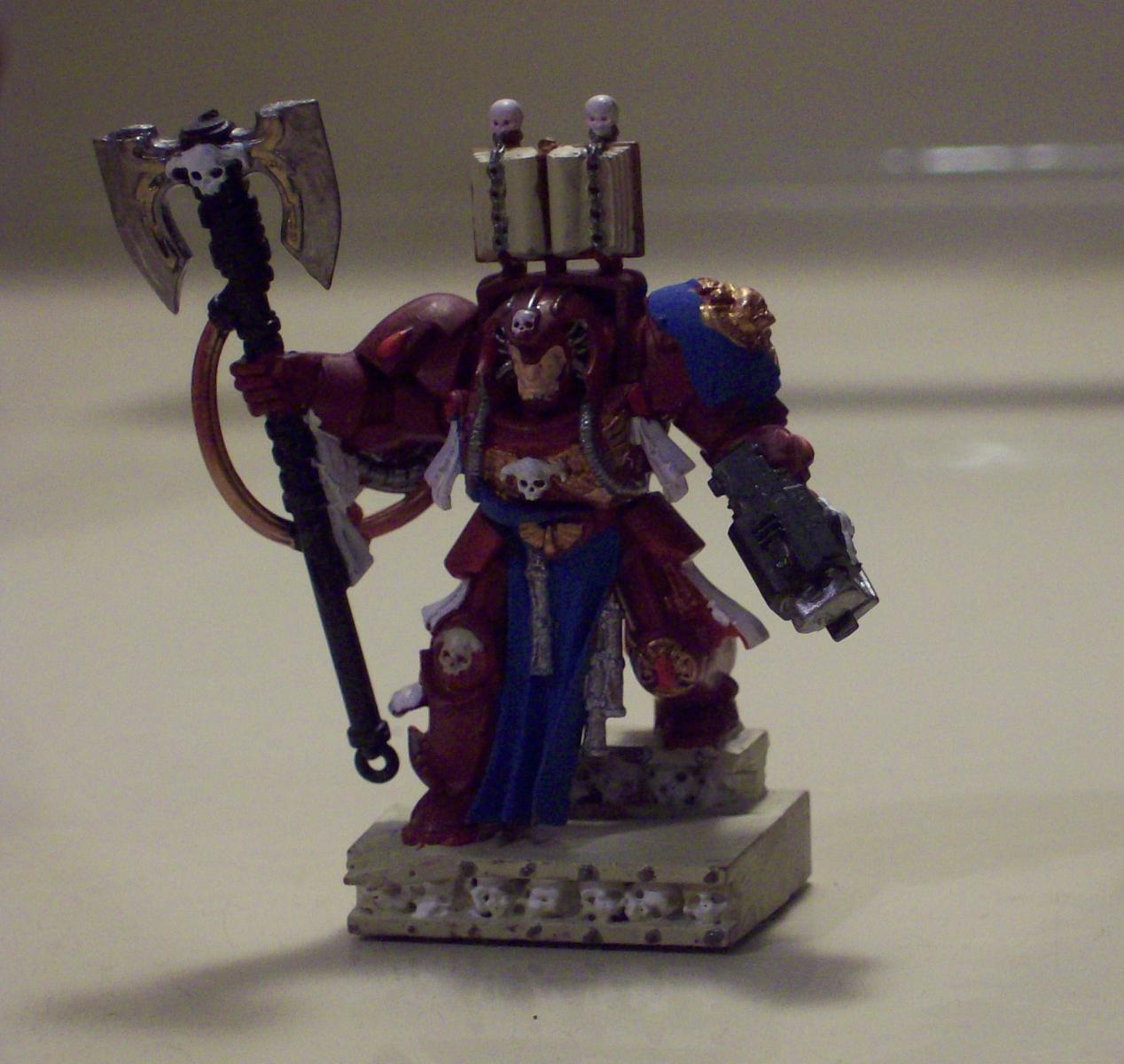 After some consideration, I will be fighting for the honor of the Blood Angels forum.

If I can, I'll get a background written. Not sure if I'll have time.

Representing the Chaos Forums is 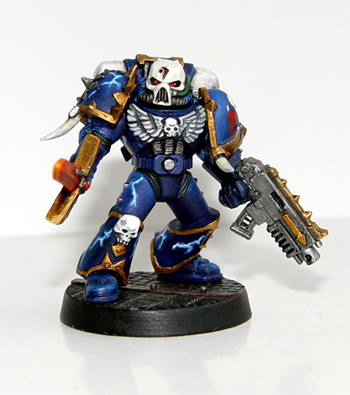 Master Pellinor of the Dark Angels

Master Pellinor holds the rank of Master within the Dark Angels Chapter yet is not the Master of a Company. Indeed, the precise nature of his rank is a mystery to many normal marines within the Chapter, yet when Pellinor appears the other Masters will defer to him. It seems the senior ranks of the Dark Angels know something about Pellinor's role that is not common knowledge in the rest of the Chapter. He carries one of the fabled heavenfall blades and an ornate plasma pistol, said to have been gifted to him by Azrael himself - tokens of high standing and impressive combat prowess.

Pellinor's appearance within a warzone cannot be predicted, but when he does appear, it is usually the precursor to some particularly ferocious fighting. Pellinor's last recorded appearance was on Medusa V where he lead a small force from the 4th company and the Ravenwing to a number of victories over Chaos forces. Favoring the black armor of the Imperium's Chaplains, Dark Apostle Aak'Druu enjoys his twisted parody of opponents' holy wargear. Utilizing old, forgotten tech long forgotten by the Techpriests of Mars, Aak'Druu's ancient plasma pistol can fire on the lowest setting ever known, putting out a volley of low-power plasma shots...or overheating inconveniently. His deadly and accursed Crozius is his symbol of power, and the Gods look upon him favorably and bless him with their protective embrace.


I'm surprised nobody has busted out Skulltaker yet. If mine was painted he's totally my pick...maybe next time...

Post link for all the instances in which Reanimation Protocols doesn't activate, but should.

Iron-Commander Lestek Piaast is one of the three primary commanders of Clan-Company Griogaar, alongside Iron-Father Herzog and Venerable Brother Stampfa. Piaast is the speartip of the Company, always leading from the fore with his cadre of Assault Marines. He fights and leads in stony silence, spending his words more dearly than bolt-shells, and is a stark contrast to the fiery and impassioned rantings of Herzog. Piaast bears the relic blade Zomorrodnegar, with which he slew the daemon Zerehfulad and all its armies, though that battle cost him all his legs. Built into his mostly-bionic body is a rare and powerful conversion granted to him by the Adepts of the Forge World Subdury V after he lead the defence against the Necrontyr beneath the planet's surface, where he lost his last remaining fleshy limb. Piaast is said to have thanked the Necron Lord for doing him that service, before carving it to pieces.


Piaast fights for the Index Astartes!

SCC
The Legionnaire (Legion of the Damned)
Index Astartes

When I wake up, I'll close the roster (and add any last minute additions that may crop up between now and then).

18 heavy-hitters. Thsi going to be interesting.

Bragging rights will be fully accounted for.

Sorry? Is there any other forums here?

Okay, my previous post had all of the entrants, minus one. Grey Mage posted a character, but kept the entry invisible pending an image of his character. This is his opportunity to get that image posted so that his Space Wolf Rune Priest can participate. I'll wait for a nay or yay from him before finalizing (and we'll turn the entry visible so that y'all can see it).

Once I have final word, we'll start with the draw for the first round. My mechanic for each round will be a random blind draw. Each character's name will be written on a token and all of the tokens will be placed in a hopper. I'll draw two names out at a time to arrange battles. If we have an odd number of participants, the one left over will get the bye. A character that gets a bye in one round will be considered the first name drawn for the next round, ensuring that no one gets a bye two rounds in a row.

Ladies and gentlemen, boys and girls.. Leeeeeeeets get ready to ruuuuuuuuuuuumble!

" They made you to be untouched by God or mortal. As I cannot kill you, so I curse you, not with death but with life.

I curse you - with the pain of ten thousand days in the Dark Place, with the life's blood of a mage's sacrifice, with Death's authority held in my hands.

I curse you, and I strike your name from history, stripped of arrogance and pride, empty of the self you once knew, gutted of all you are. I take your name and all you have won by the strength of your hand. I curse you for eternity, to find only darkness where once you knew your own face.

And I dub you the Ragged Man."

Should be a good time had by all.

Hopefully I won't continue the obvious trend of getting worse and worse and my character dies in a freak accident before the AoD starts... possibly involving being run over by a Land Raider while on the way to the arena.

Interesting to see random allocations - I was half expecting a sneaky trick like the first round being between competitors of the same board sections, with the two Index Astartes representatives fighting each other, and similarly the two Black Templars, Librarium reps, Inquisition agents, Liber heroes, Dark Angels, Chaos guys etc. battling to represent their section in round two.

It looks like my fellow Liber Astartes representatives may be spared the wrath of my character's Apollyon pattern chainsword, at least until later in the competition...

... Unless Brother Tyler would be willing to allow... Challenges?

... Unless Brother Tyler would be willing to allow... Challenges?

Wouldn't be fair to SW mods having their characters eliminated in round 1 by DA mods....

Fair? Sounds fitting to have a recreation of the old DA / SW feud.

Are you fixin' to lay a challenge on one of the Wolf characters, Luci?

I would just like to point out to all Bro Nihm's character's name. This made my day

Was this a subtle commentary on the most recent Chaos Space Marine Codex, Nihm?