Shields of the Legio

There have been no suggestions for revisions, so we'll consider this article to be finalized. It will be incorporated into the Legio Index Astartes article (both here and in the Librarium) later. We might update it with improvements if we think of any, though. Members are invited to include the honour shields for their Legio personae as replies to this post (see the templates below and in this gallery).

When the Legio was created in M36, the initial core of battle-brothers that formed the new Chapter came from the Imperial Fists, Black Templars, Soul Drinkers, and Firehawks Chapters. This group numbered around 300 battle-brothers led by the normal contingent of officers. Over the next decade or so as the Wars of Apostasy cleansed the Imperium of Goge Vandire's rule, the four Chapters that founded the Legio helped the nascent Chapter in communicating with other Chapters of Adeptus Astartes. In time, a great many other Chapters consented to providing aid to the Legio, most through seconding a battle-brother to the Legio for service. The majority of Chapters that participated in the early years were descendants of Rogal Dorn, mostly due to the persuasion of the Imperial Fists Chapter. 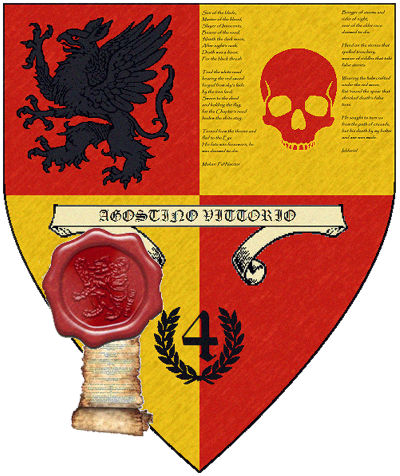 When a Legio battle-brother dies, his personal heraldry will be crafted into two shields. Although the two shields are of different sizes and shapes, the honours crafted upon them by the Legio's artificers are identical and follow a complex heraldic scheme that is based upon the dictates of the Codex Astartes. The smaller shield is similar in shape and size to a combat shield. There are several different patterns of combat shield used by the Legio, so a battle-brother's death shield will be based upon the type of combat shield he used in combat or will be of a generic type. The larger shield is elongated in form and will actually serve as the cover for the sarcophagus that will return the battle-brother's remains to his parent Chapter. Both death shields will incorporate the battle-brother's honour shield into the center, though this will be a smaller version of the true honour shield and will be of carved brass.

Members of the B&C are encouraged to design the honour shield for their Legio B&C character.

In the near future, we'll provide templates that members can use to design their own shields. You'll be able to take the template of your choice and use the image editing software available to you to design your shield, then submit that image with the image of the mini that you're using to represent your character. In addition, the image can be used as your avatar, personal photo, or within your signature if you desire.

I've created a gallery with jpg images that members can use as templates for their own Legio honour shields. I'll update the gallery as I get more images completed, but the first batch includes the current range of storm/combat shields and a few more basic shield shapes from historical examples. You can see the gallery at:

Here are a few of the images:

Here is a shape based on the Company Champion combat shield in the Command Squad set: 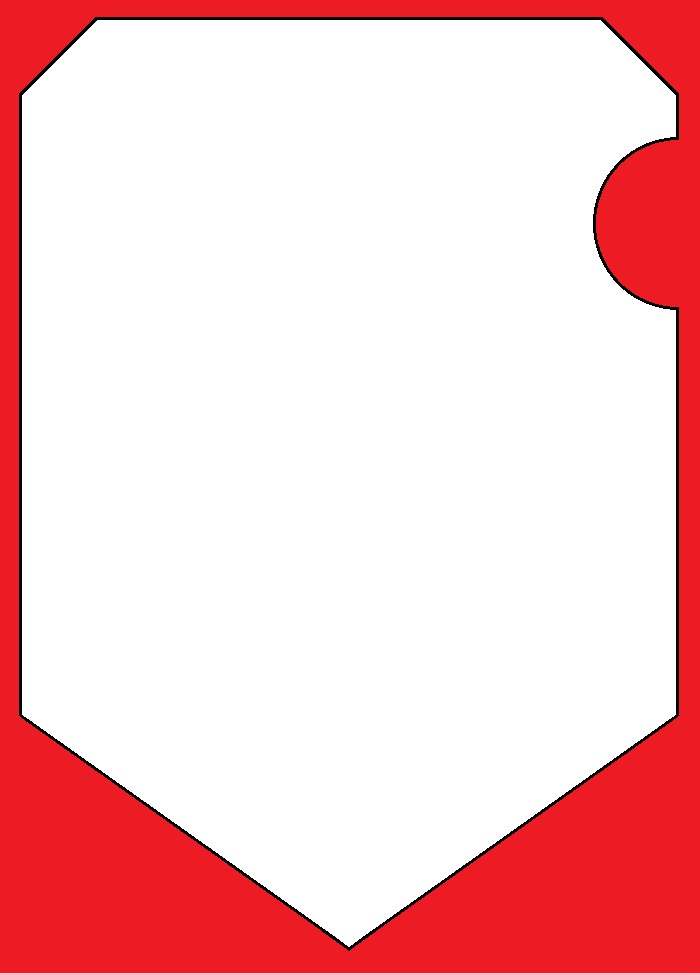 Here is a shape based on the Master of the Watch miniature (part of the Masters of the Chapter boxed set for Apocalypse): 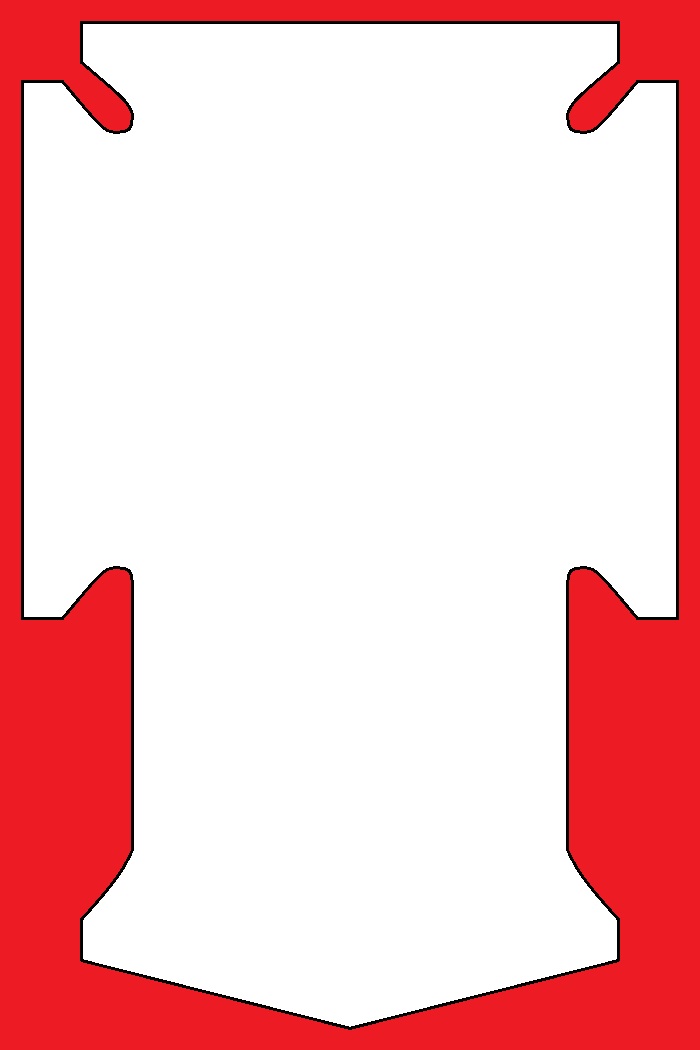 Here is a shape based on the combat shield in the Assault Squad set: 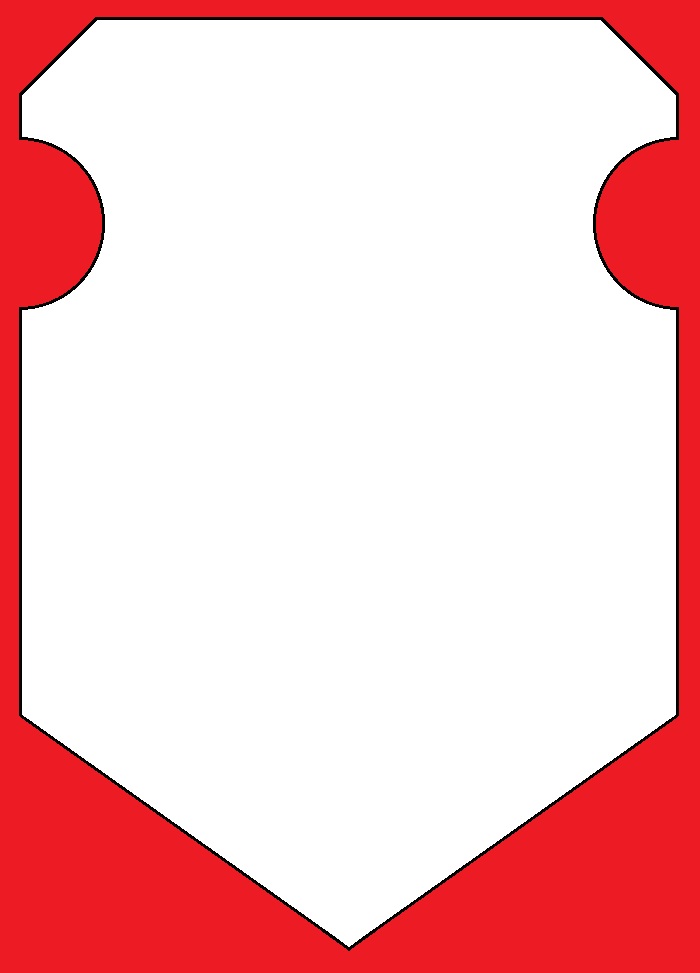 And here's a shape based on the Black Templars storm shields available from Forge World: 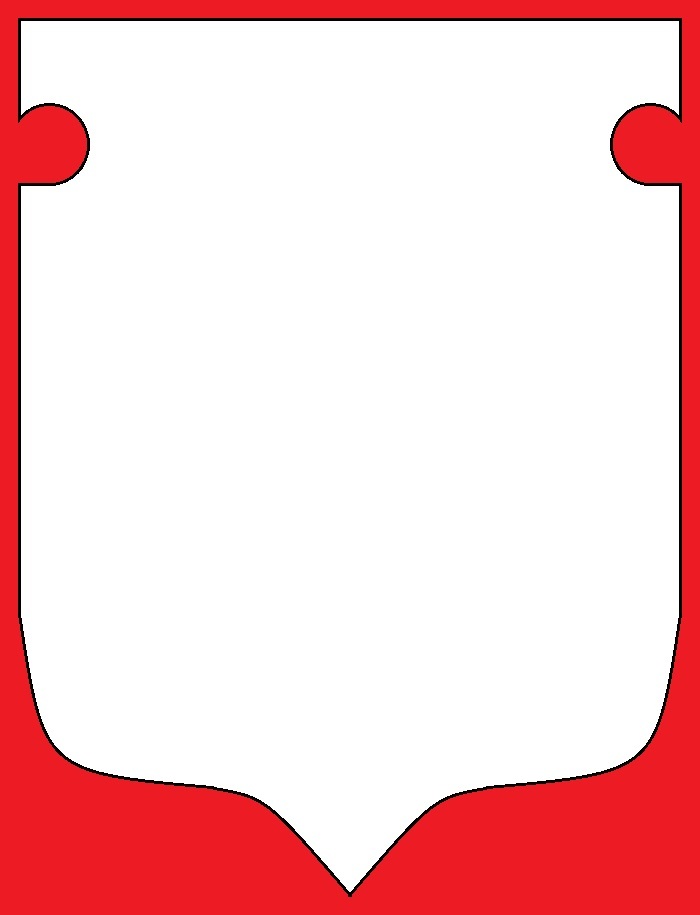 There are a few more and I plan to increase the number of shield templates available as I have time.

If the jpg versions don't work for anyone, let me know and I can provide the bitmaps.

Be sure that making one of these for my reoccurring Legio character: Ferrum, is on my to-do list for the next couple of months.
A very cool idea Brother Tyler!

Hmm. I might print these out, because not having photoshop sucks.

Oops! At Games Day USA (Baltimore) 2010 we had a little contest where attendees were challenged to create their own Legio Honour Shields. We provided shield templates in a variety of designs and coloring/drawing materials, allowing attendees to customize their shields as they liked. I scanned all of the submissions and the mods voted for their favorite.

Our winner was Steve, who submitted the following: 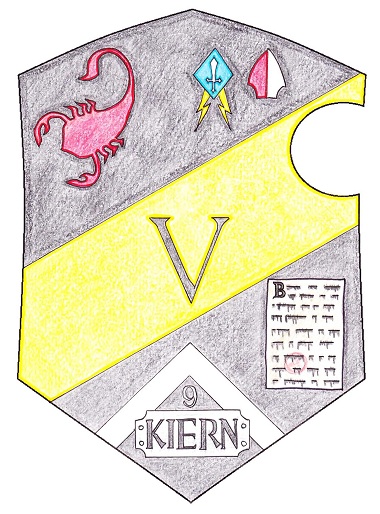 Per Steve's description, the shield was that of Brother Kiern of the Red Scorpions 5th Company (Battle), 9th Squad (Devastator). The scroll on the right is the oath of loyalty Kiern swore upon being seconded to the Legio and the designs at the top right indicate the campaigns and battles that Kiern fought in (the two lightning bolts hanging from the sword in blue diamond design indicate that he participated in two drop pod assaults in that campaign).

Steve's prize was a gold Legio skull and crossbones casting sculpted, and cast by -Q-: 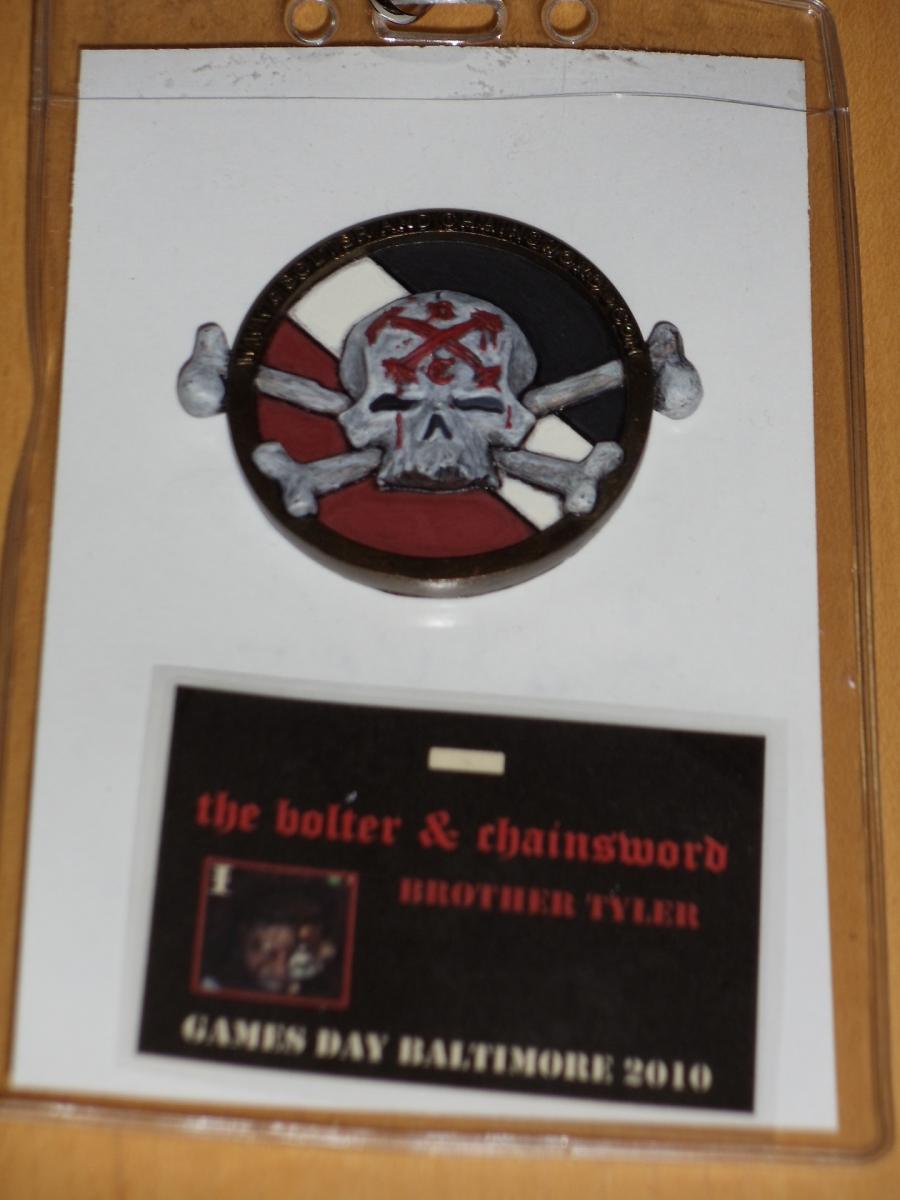 (I sent it to him long ago, so the one in the image above is a painted version).

A (very) belated congratulations to Steve for his work, and a "thank you" to all of the other Games Day attendees who submitted their own shields.

And I'm now going to submit myself to the pain glove for not announcing this in a more timely manner.

Here's the honor shield for my Legio persona, Brule Onathemes (the Spear-Slayer):

Formerly a battle-brother of the 3rd Tactical Squad, 5th Company, Brule was awarded the Imperial Laurel for his valor during the Jurekai Punitive Expedition. He has sworn his oath upon his sword of justice (an element of the Avenging Lions background that you can read about in their index astartes article linked in my signature).

Brule was seconded to the Legio Bolter & Chainsword in 709.M39 and served in the Justice of the Emperor Great Company. Some day I'll get a mini-me of him converted.

The original version had a reddish border around the outside of the shield, a byproduct of the template provided. I removed some of it by creating a new layer that covers the red.

Very nice!
I like both the shields, and argh! Now I also want a prize like that Brother Tyler!

Hopefully I will be able to submit my own shield by the end of the year.

Ah, I've just been informed that the templates I provided don't work well because of the red background I gave them. I'll try to fix that so that members don't have to play around in Photoshop (or Gimp or whatever else you're using) to get rid of the red.

I just realized that I've been delinquent in putting forth an honour shield of my own. For this one, I'm not submitting a shield for "my" Legio mini-me. Instead, I'm submitting one for a character from the same Chapter, but from centuries prior. There's a method to my madness, but it doesn't matter right now (you'll find out in due time why this guy matters). 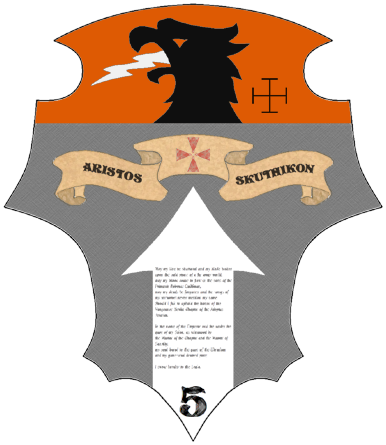 Brother Aiakos of the Vengeance Hawks Chapter of the Adeptus Astartes was seconded to the Legio in 139.M41. The upper portion of his honour shield includes a stylized version of the Chapter badge: a screaming hawk's head with a black lightning tongue representing the vengeance the Chapter visits upon the enemies of Mankind. To the immediate right of the hawk's head is an honour mark, a Crux Aquilum, earned in battle during the Skuthikon Expedition. The lower portion of the shield includes a scroll with the motto "Aristos Skuthikon," an honour title given to Aiakos as a result of the Skuthikon Expedition. At the center of the scroll is a crimson fermee cross, a common honour marking and used in this instance to indicate that Aiakos has been deemed pious by the Chaplains and pure by the Apothecaries and Librarians. Beneath the scroll is the white arrow badge of a tactical squad with Aiakos' pledge of loyalty and the arabic numeral "5," indicating his membership in the 5th (Battle) Company of the Vengeance Hawks Chapter prior to being seconded to the Legio.

Prior to serving in the Skuthikon Expedition, Aiakos had participated in the Thareus Punitive Operation as a newly-initiated Tactical squad battle-brother in the 5th Company. Previous to that he had served as an Assault Marine and Devastator Marine in the reserve companies, as well as a Scout neophyte in the Tenth Company. Aiakos had served in the Vengeance Hawks Chapter for thirty-six years when his Chapter Master selected him for secondment to the Legio. He had recently returned from the Skuthikon Expedition, a member of a small detachment of Vengeance Hawks battle-brothers assigned to Archmagos Devor Skuthikon's Explorator Expedition to the galactic south. The expedition lasted twelve years, during which time Aiakos distinguished himself in combat against various enemies of Mankind, including Eldar pirates and the nightmarish Uraeko'os. By the time the expedition returned to Imperial space, Aiakos was serving as second to Sergeant Oiden.

Brother Aiakos had received several devotion seals during his service in the Vengeance Hawks and was known for his strict adherence to the teachings of the Codex Astartes. Aiakos' piety and stern stoicism had him marked as a potential Chaplain and he occasionally assisted the Chaplains in administering the rites. His secondment to the Legio precluded any potential service in the Vengeance Hawks' Reclusium, however.

While Aiakos' humility kept him from including significant personalized decoration upon the honour shield, the unusual shape of the shield was the result of the Chapter's artisans. The colors represent the Chapter Approved colors of the Vengeance Hawks and the oath was handwritten by Aiakos after a week of prayer and fasting within the Solitarium.

The original version of this shield was drawn by hand, then scanned in for further work in Microsoft Paint and Adobe Photoshop. The core concept was inspired by the wonderful heraldic art of Marco Foppoli, with the shape of the shield taken from some of that artist's Ecclesiastical heraldry, especially this piece (which also served as a model for the hawk's head, though I modified it a bit). I've put the Legio stamp upon the decoration, however.

My intent with this shield is to try to demonstrate some of the variation that is seen in Legio Honour Shields. Though there tend to be common elements (parent Chapter colors and badge, company/squad affilation, oaths, honours), the end results vary from Chapter to Chapter and individual to individual. I also want to reinforce the concept that battle-brothers seconded to the Legio tend to be on the lower end of the experience spectrum. They've served in the Chapter long enough to prove their worth, but most haven't achieved the rank of Sergeant or been inducted into their Chapter's 1st Company (or its equivalent). The last few shields that have been submitted have been pretty good about sticking to that concept, even though the first example I gave (the Howling Griffons) broke that "rule."

Aiakos will figure into a later project.

Also tagged with one or more of these keywords: Legio B&C, Legio Bolter & Chainsword