When I first got back into the hobby during the Armageddon campaign there was only one army for me, I read their IA article and fell in love... The Salamanders, they were to become my first ever painted army.

Over the past 10 years I sadly abandoned them and tried my hand a few others (Iron Hands, Iron Warriors, Death Guard, Iron Hands again, Grey Knights, Imperial Guard, Blood Angels, Black Templars...) the list goes on, but I learned a few new techniques (i.e. not to just paint one colour and then apply flock...)

I read the awesome Helsreach and had this overwhelming desire to create an army, something which I thought would never happen again - so I dug out some old Templar parts, ordered some of the Forge World stuff and got cracking, however, something didn't feel quite right. I then read the Salamander novel whilst on holiday and it hit me, it wasn't Templars that I had the desire to build after reading Helsreach, it was the Salamanders - They were awesome.

Then a good few weeks ago I saw the new LPC thread and entered my vow - 1 Tactical Marine, 1 Assault Marine, 1 Sternguard Veteran and 1 Venerable Dreadnought (I know what you're thinking, but I'm most certainly not the quickest painter in the world!!)

So here is my progress so far...

My Tactical Marine is pretty much completed, may add a few extra flame details on him (Badab part 2 has some great ideas in it) There are a couple of other shots of him in my gallery (Back and side) 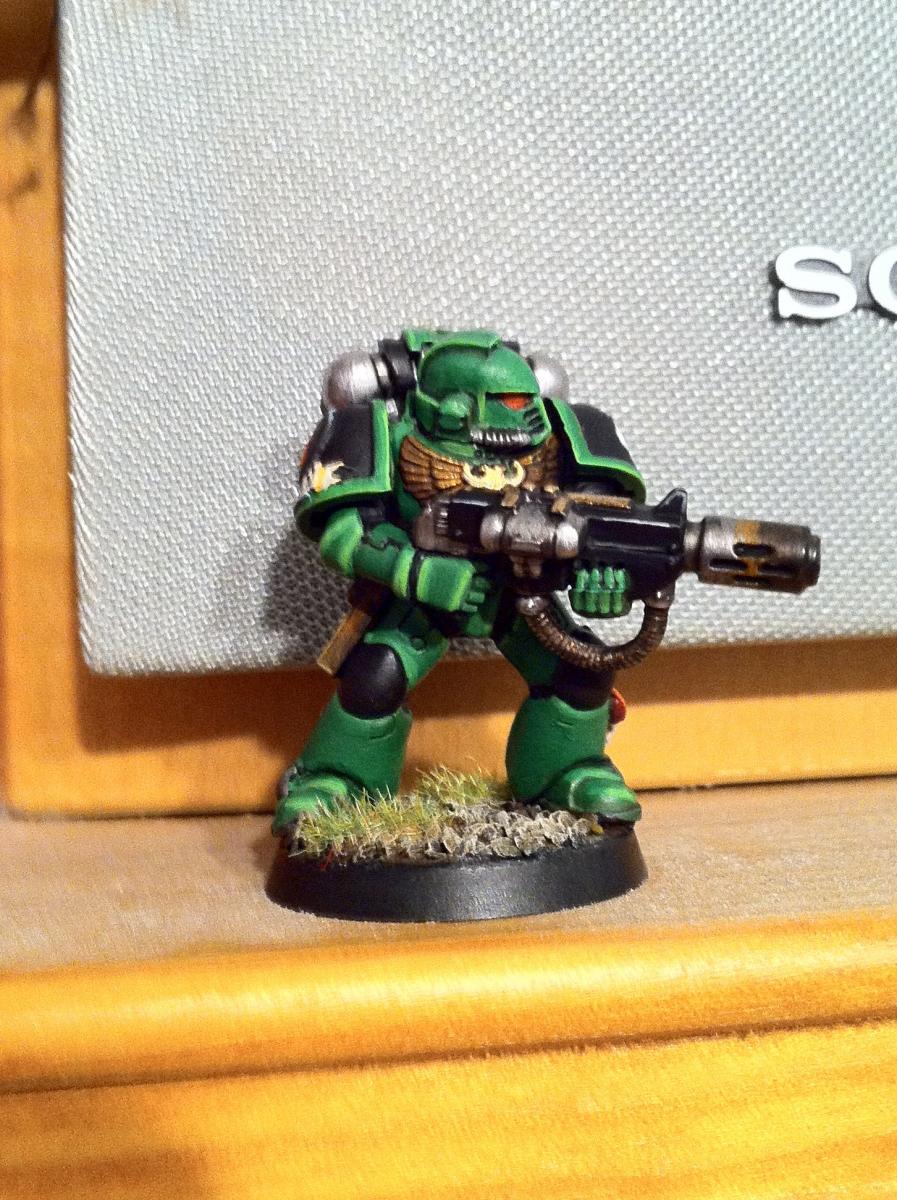 Next I'm painting my Assault Sergeant (at the moment I've pretty much completed the green, am now working on the metallics) 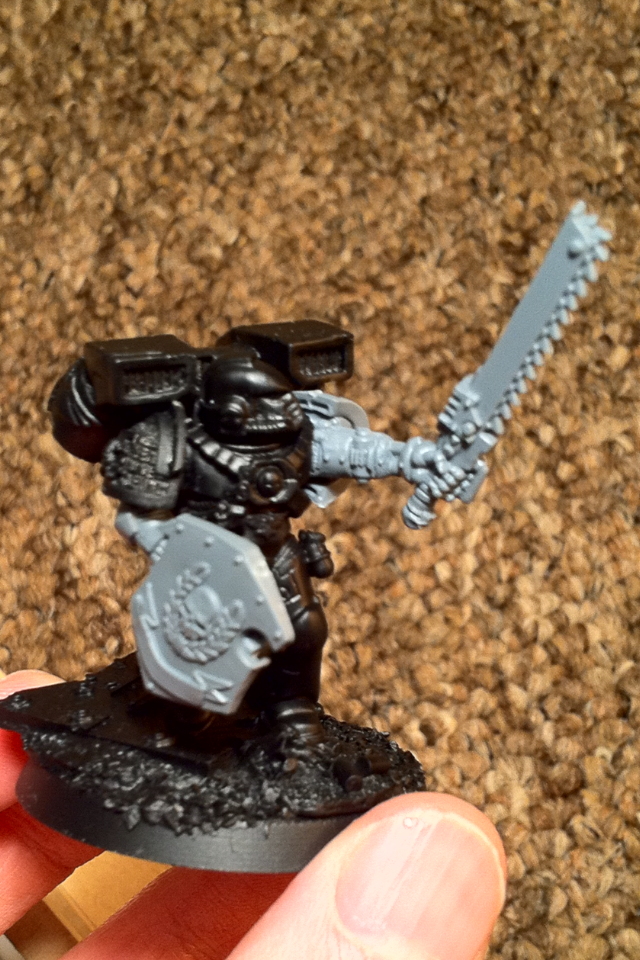 The Sternguard is next, he hasn't even been undercoated...

After reading the article about Armour in the Badab book, I decided to give him the Mk 8 torso and shoulder pads to show he is a well honoured member of the chapter. 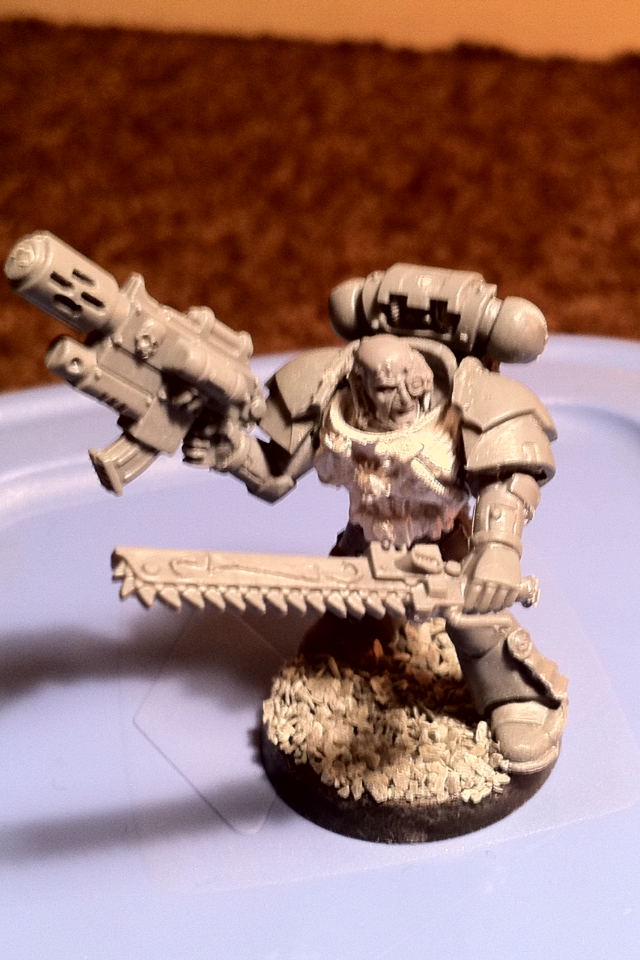 Finally the Dreadnought, again, he isn't undercoated and I've since added a front plate to the sarcophagus for extra detail. 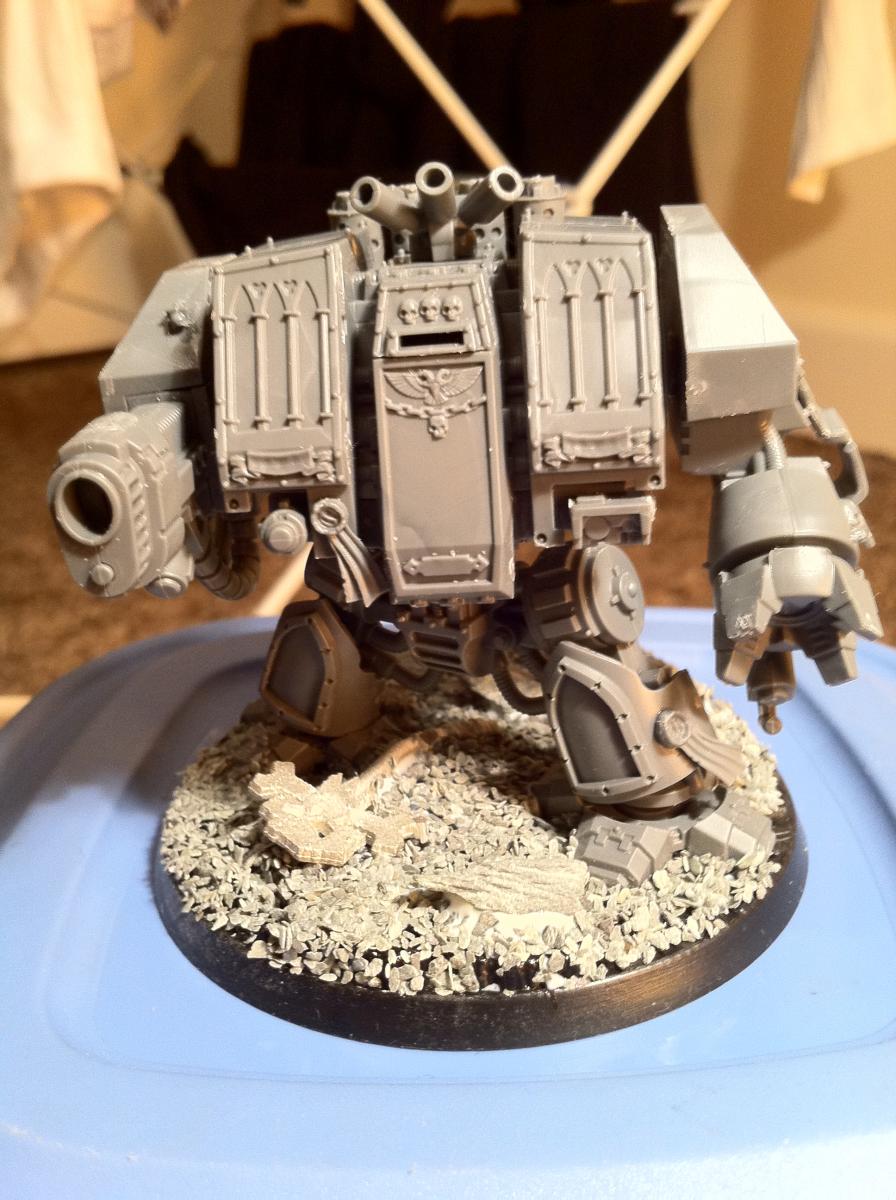 As it was Armageddon that got me back into things, there will be some Ork parts on the base (but not so much it looks like I've just glued the contents of my bitz box to the base...)

All comments and critique more than welcome, especially areas I can improve on (The highlights look much better in real life, especially the scorched barrel of the Melta gun, it's just the iPhone camera is not my friend when it comes to taking photo's of anything GW related, damn you Apple...)

i love MRK IV helmets any way so ima be biasd any way and say...."chyeeeeaaa" sallies look dope n mrk IV......i really like the green, what if you water blended goblin green, snot green and orkhide shade a couple of layers?

I've never tried water blending, is it hard to do?

This is what I'm doing at the moment

He's almost finished, just need to highlight every colour bar the green, paint some flames and finishthe shield and the base... 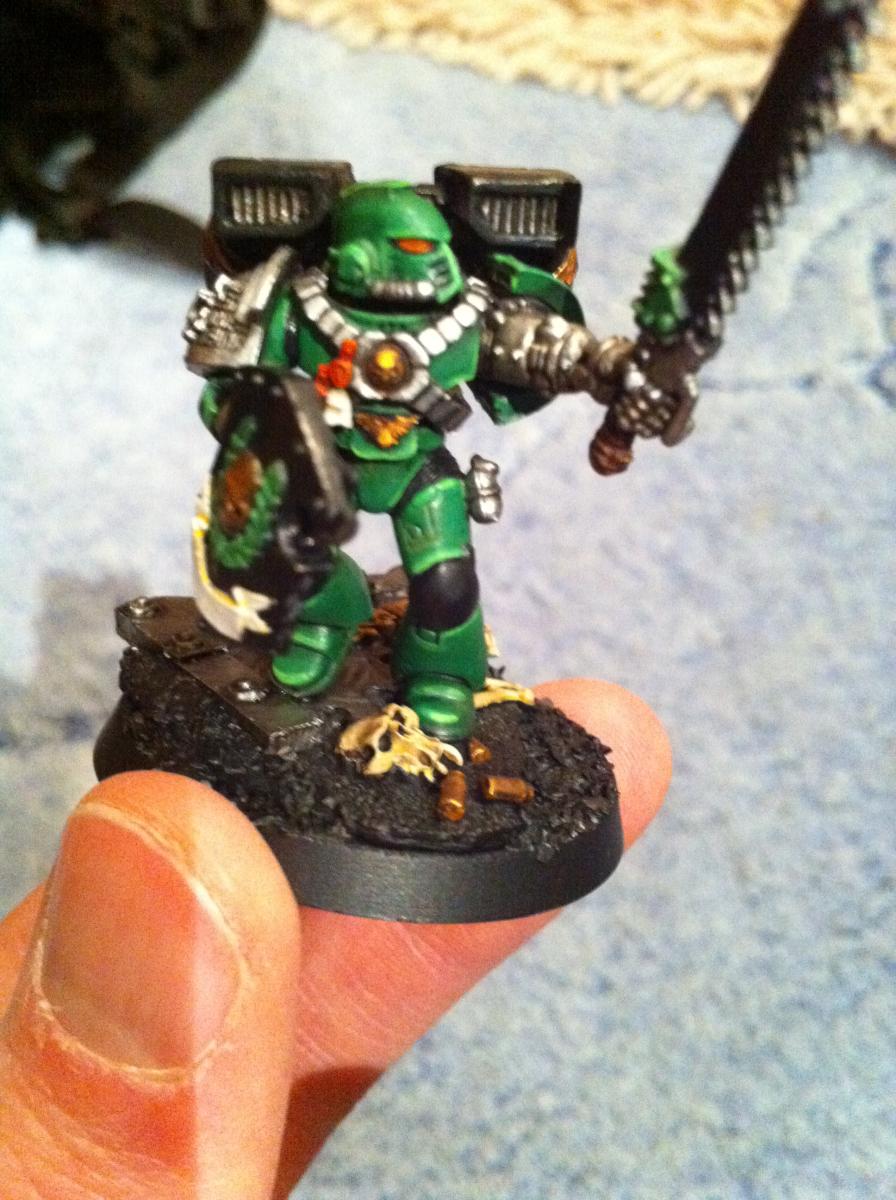 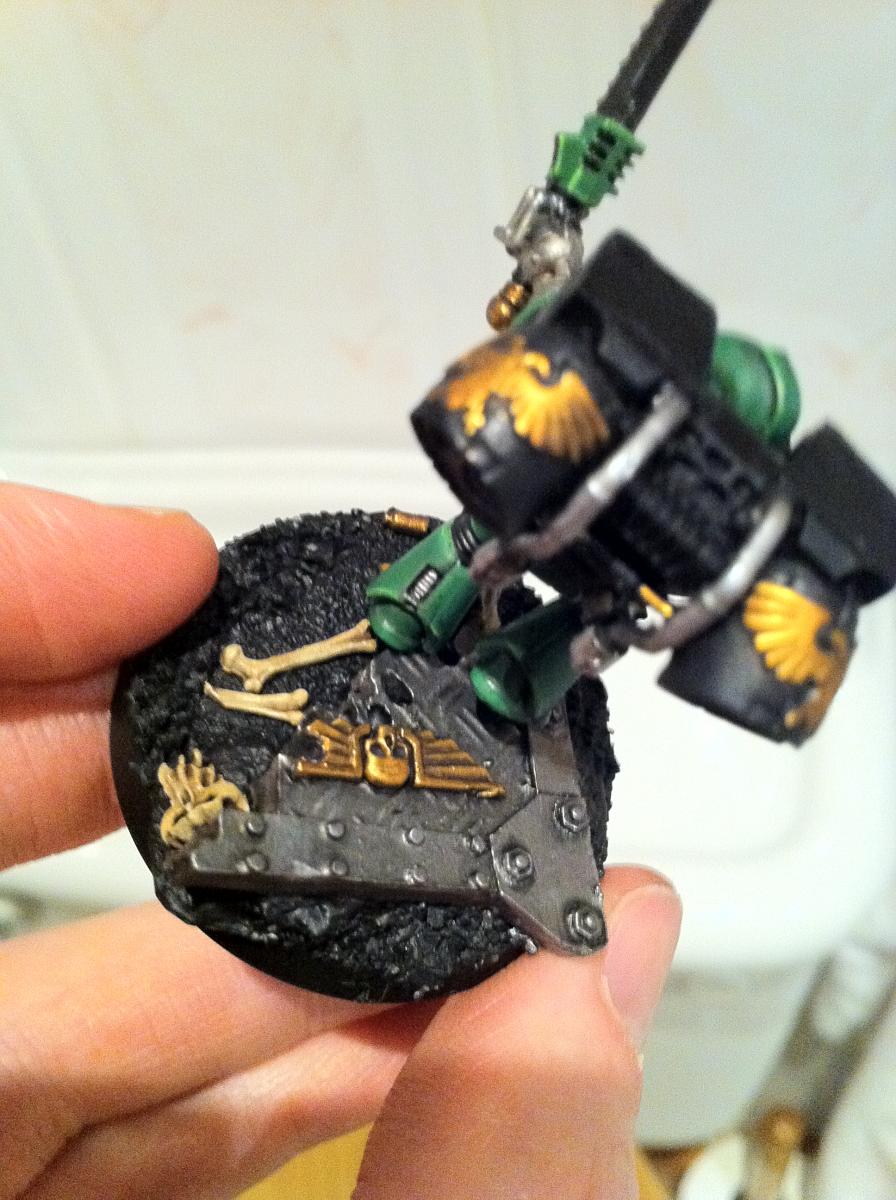 As always, critique and advice most welcome

Me likey very much... makes me wonder why I didn't use that same bionic arm on one of my own assault dudes.

Assault Sergeant is finished (until I decide on a battle damage style that I like) Here he is... 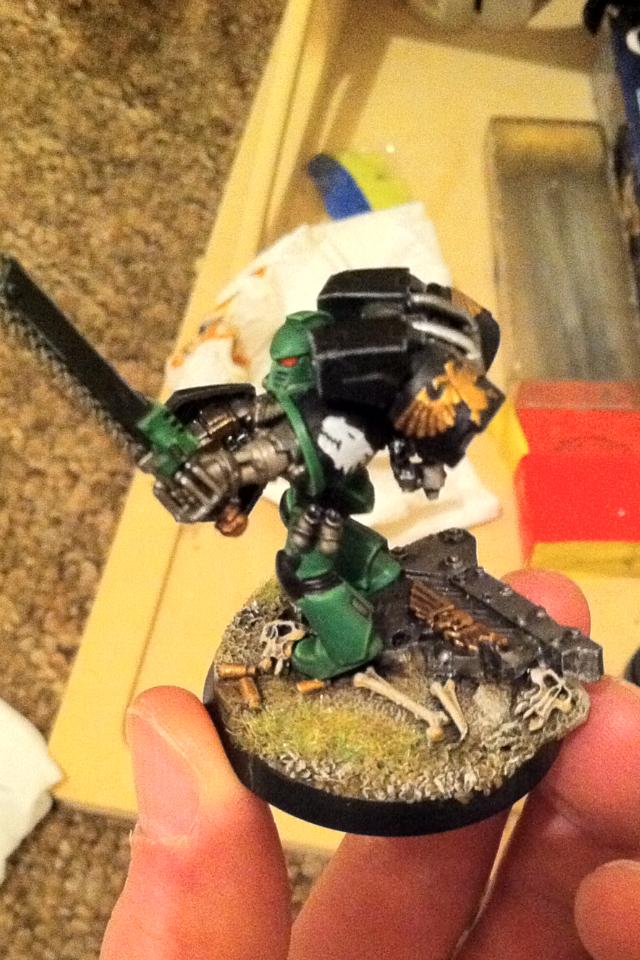 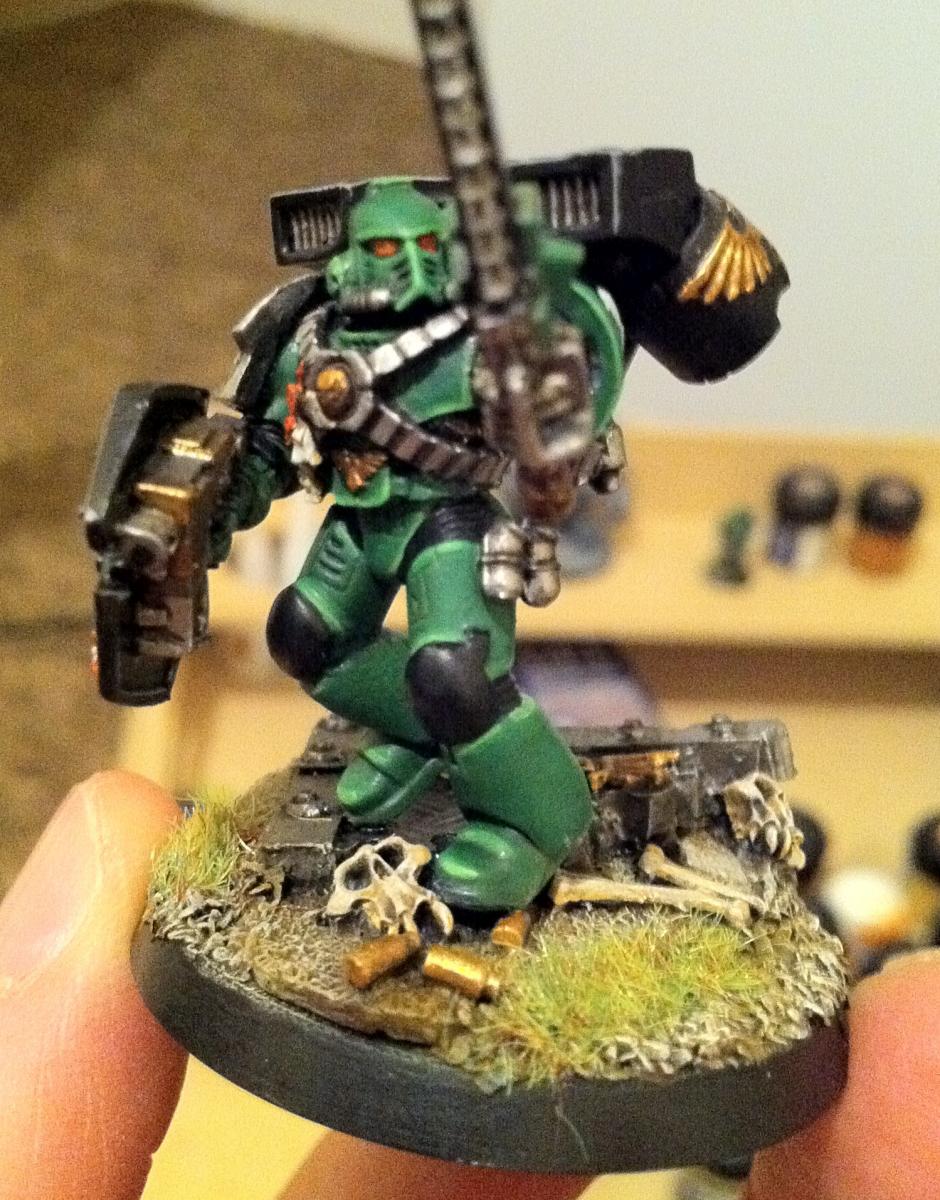 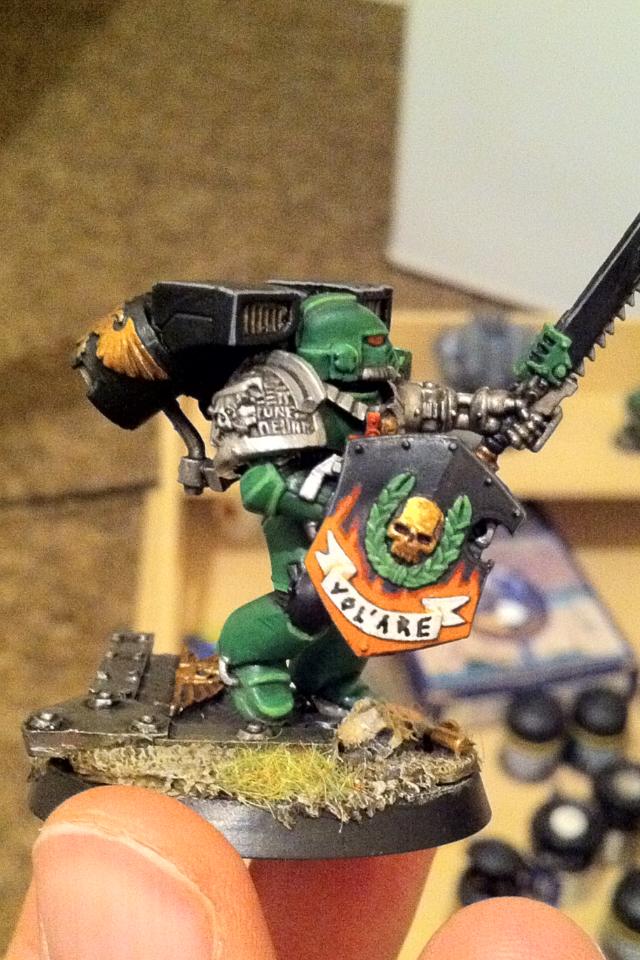 The flames look much better in person, they seem very flat and 2 dimensional in the picture for some unknown reason...

And here is an updated picture of my Sternguard veteran, just finished the wash, will start the highlighting later (and I've removed that mold line on the shoulder pad!!!) 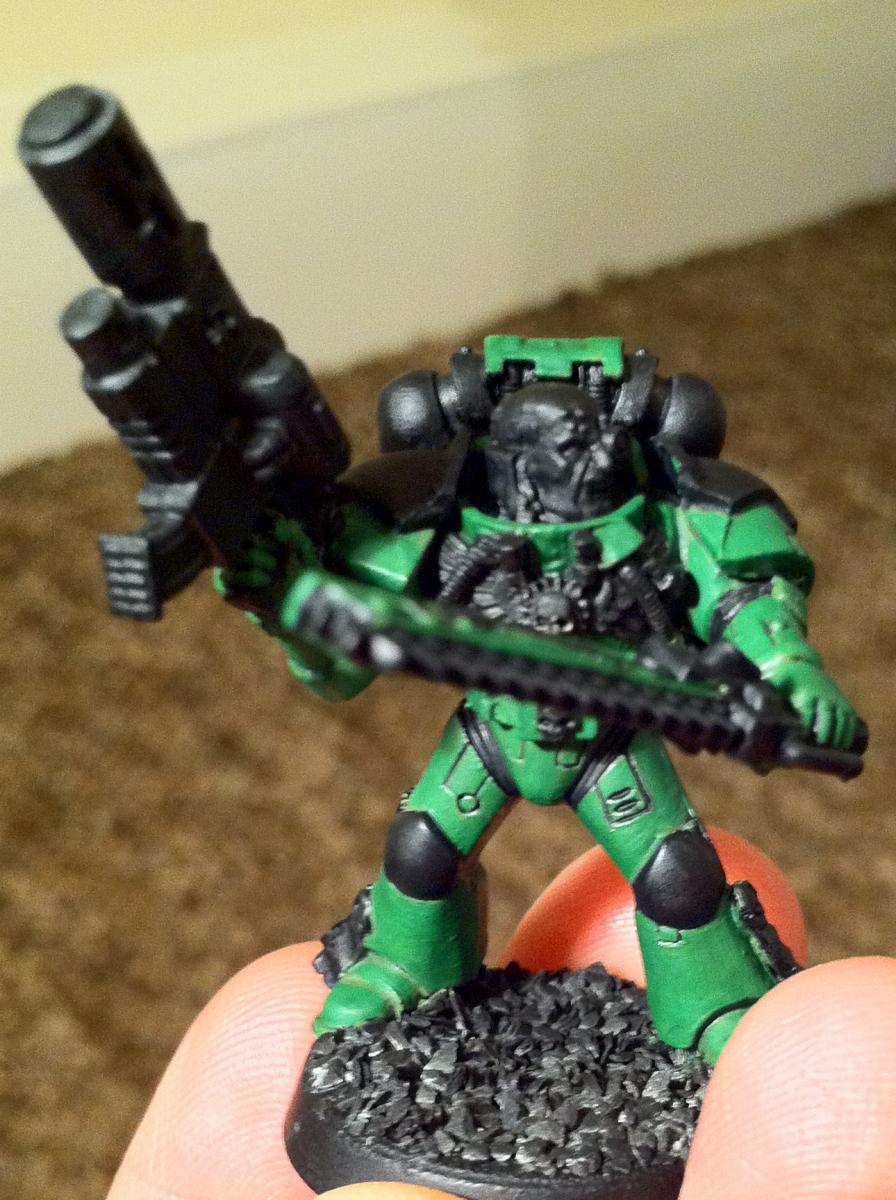 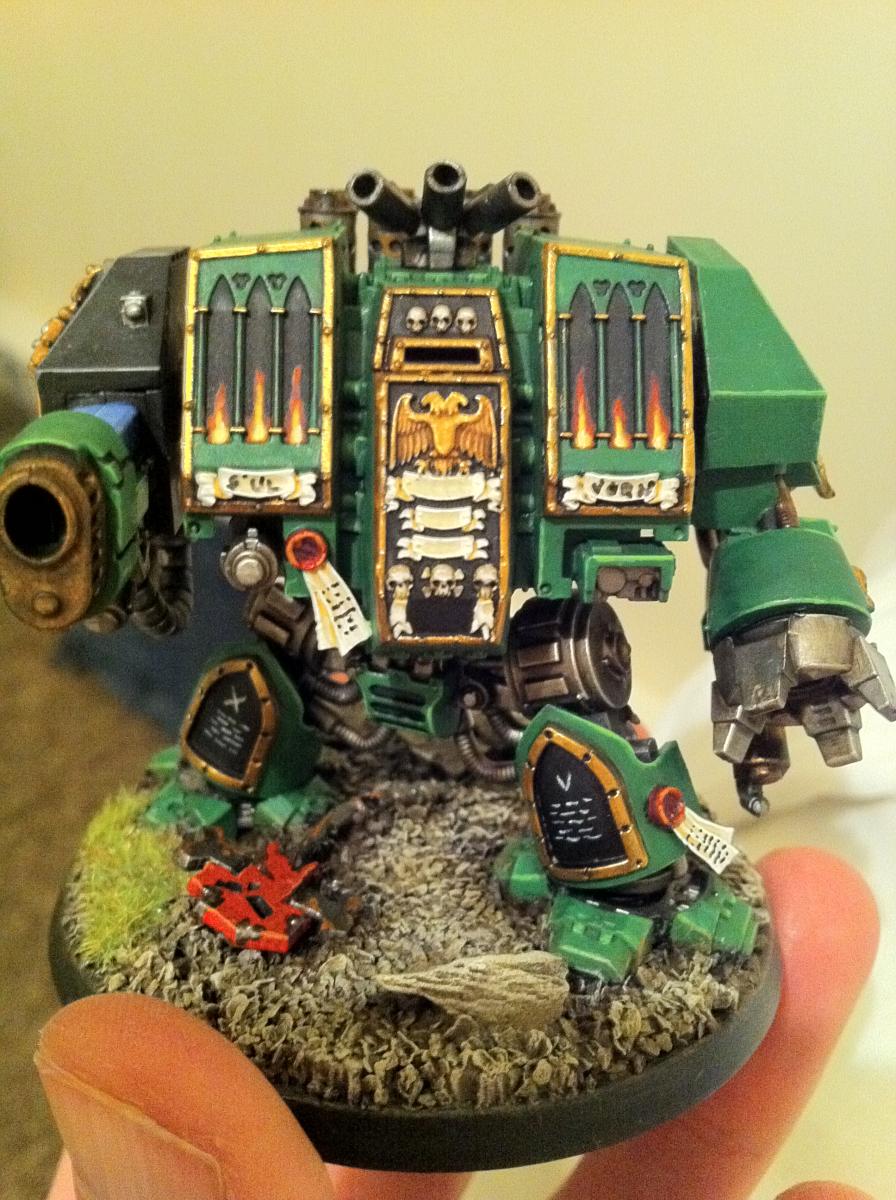 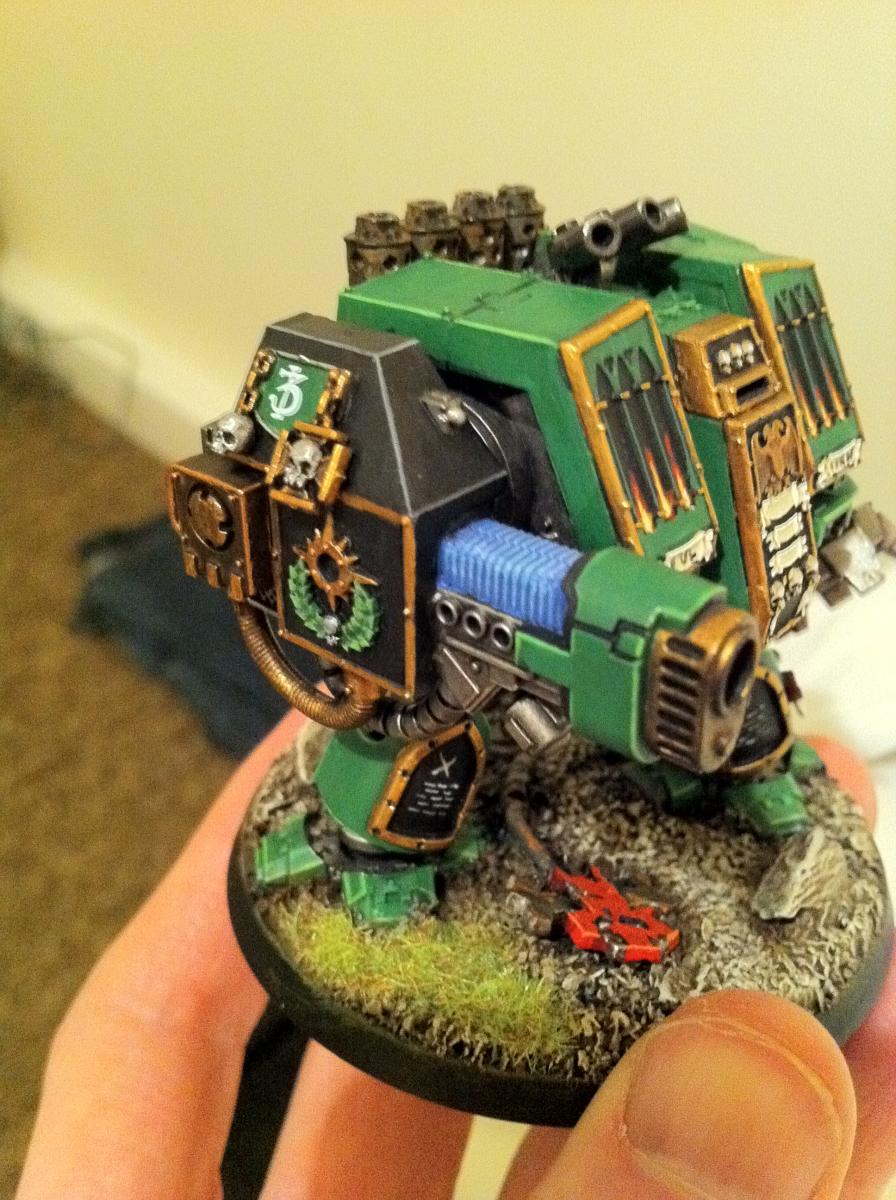 And finally, the Sternguard, some of you may notice the head is different - I really was terrible at painting Salamanders skin tones... 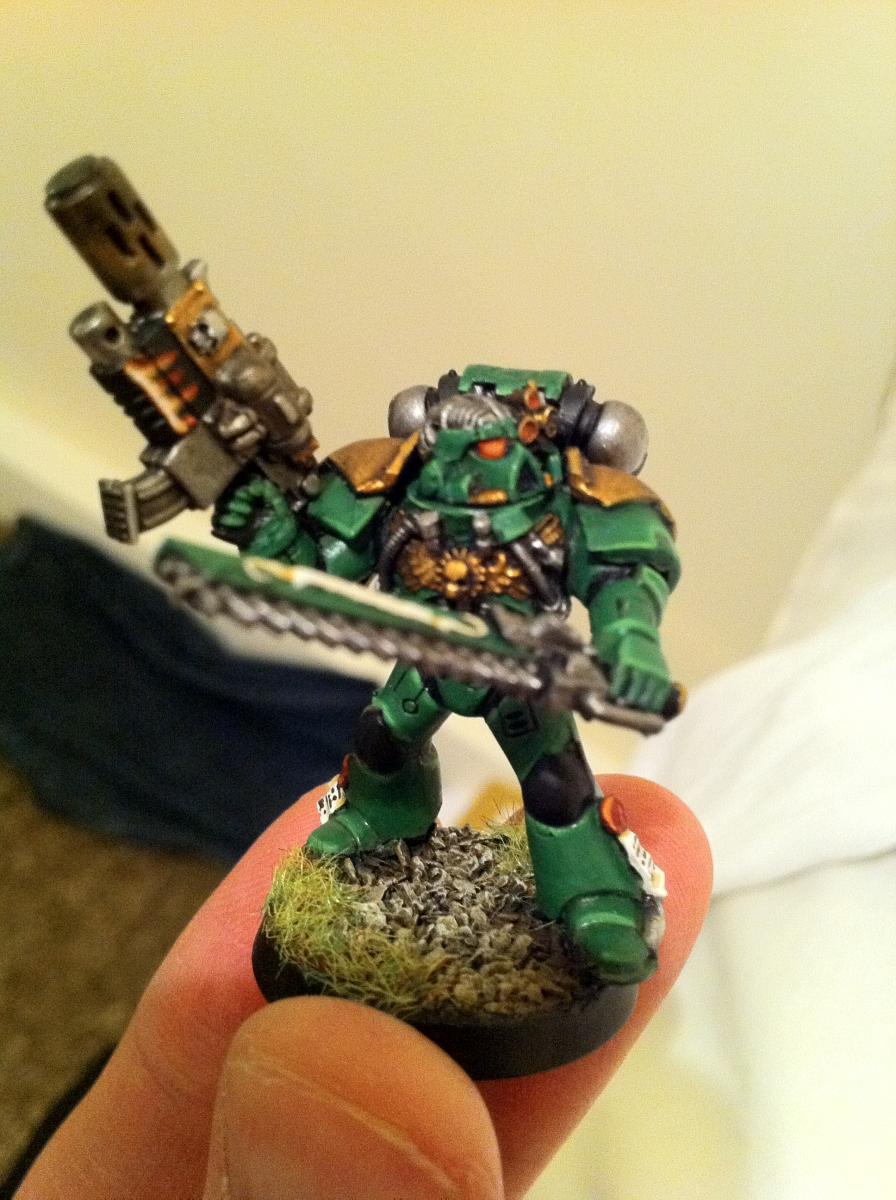 And with that, I can go back to my usual slow pace!!

Have you tried forge worlds weathering powdwers to battle damage armour I know there mainley for vehicles but they really give an amazing weatherd affect on the smaller figures , The bottom of feet espec the ends of gun barrels . There quite easy to use if you know what your doing just take the powder from the pot neat and dry brush it on to the area you want .But it only works if you do not varnish your model after painting.The varnish seems to pull the powder leaving messy streaks.

Looks like your Sallies ae coming along great! I really like the way your Ven Dread turned out - very nice! I like how you are giving each model a little something different to personalize them.

Remember that during a zombie apocalypse, you don't have to out-
run the zombies....just the guy next to you.

Could we maybe have a shot with all of the vow in the same pic please?
I hope to see some more of your work around.

out(censored)standing work brother! I am so loving your green. I too was motivated by the Helsreach novel. but I am a very loyal Templar player. but, the book got me to thinking "why don't I do a Helsreach Crusade army. so It looks like I'm stealin yer green recipe. I will give you credit. super work.

For the Emperor, and his people.

Excellent work good sir! I share the same love of the Sallies (their Armageddon era IA hooked me) and since I am completely devoid of any painting talent it is heartening to see such amazing work done for Salamanders.
Your Dreadnought and Assault trooper are particularly outstanding.

Kurgan the Lurker- "Anymore Battletech talk and I will go all Word of Blake on the offending parties. Keep it on topic please."
Bannus-"Black Crusades: Codex Marines: 13, Chaos Marines: 0. It seems that the Codex works pretty good here."