347 replies to this topic

I'm coming back to 40k after a 10 years pause (children etc). I always played SM and again decided to play & paint them, this time a vanilla SM chapter of my own.
First step, as yellow and black are my favorite colors on a model so far, I decided to go that way. After several tests, found my scheme : 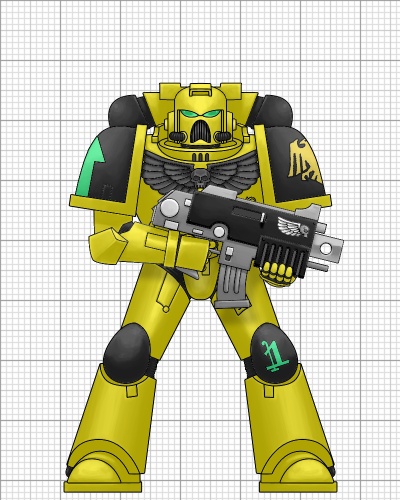 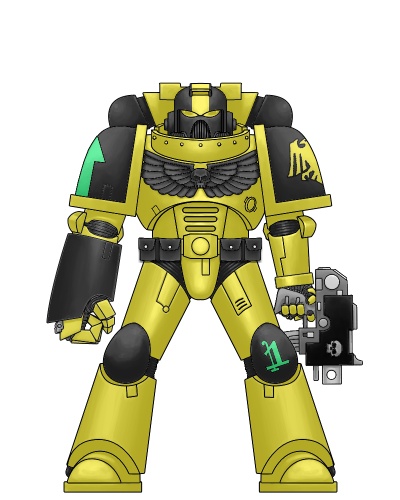 Just before going to the mini plog itself, a brief introduction on how I see that chapter. By advance I apologise for the mistakes, English is not my primary language...

The Phoenix Knights are a recent chapter, created from Imperial Fists geneseed during the 23d foundation. From their genetic heirloom they got a stubborn temper, an inclination for defensive and mechanised tactics and, above all, a knightly behaviour. That last characteristic has developped more than any other due to the homeworld they received, Avagg II, a feudal world in the Helican subsector from which they recruit their neophytes .
Little is known about their beliefs. They are strict adherent of the Cult Imperialis, but it seems that the number of librarians is higher than in a standart chapter. Those who fought alongside Phoenix Knights tell that they are particularly cautious with their equipment and weapons. They also seem to have superior quantites of special weapons and armoured vehicles. Apart from that, they follow strictly the Codex Astartes, which is considered to be the symbol of the rebirth of space marines from the ashes of the Horus Heresy. Only the titles and nomenclature may vary from the codex, inherited from traditions of the 99 baronies of their homeworld.


Enough fluff (somewhat), here are the 3 first test mini, members of the 1st tactical squad of the 2nd company. 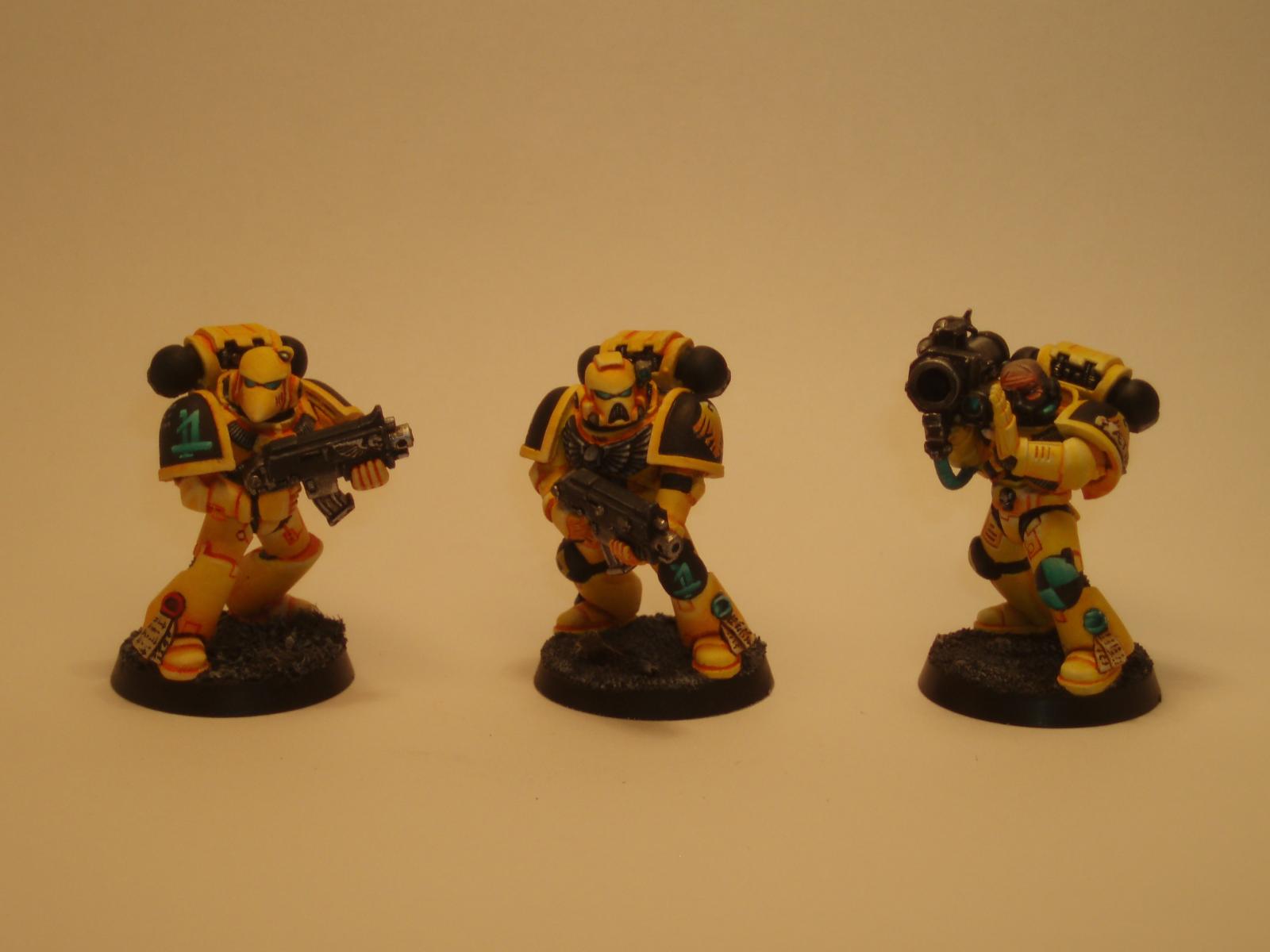 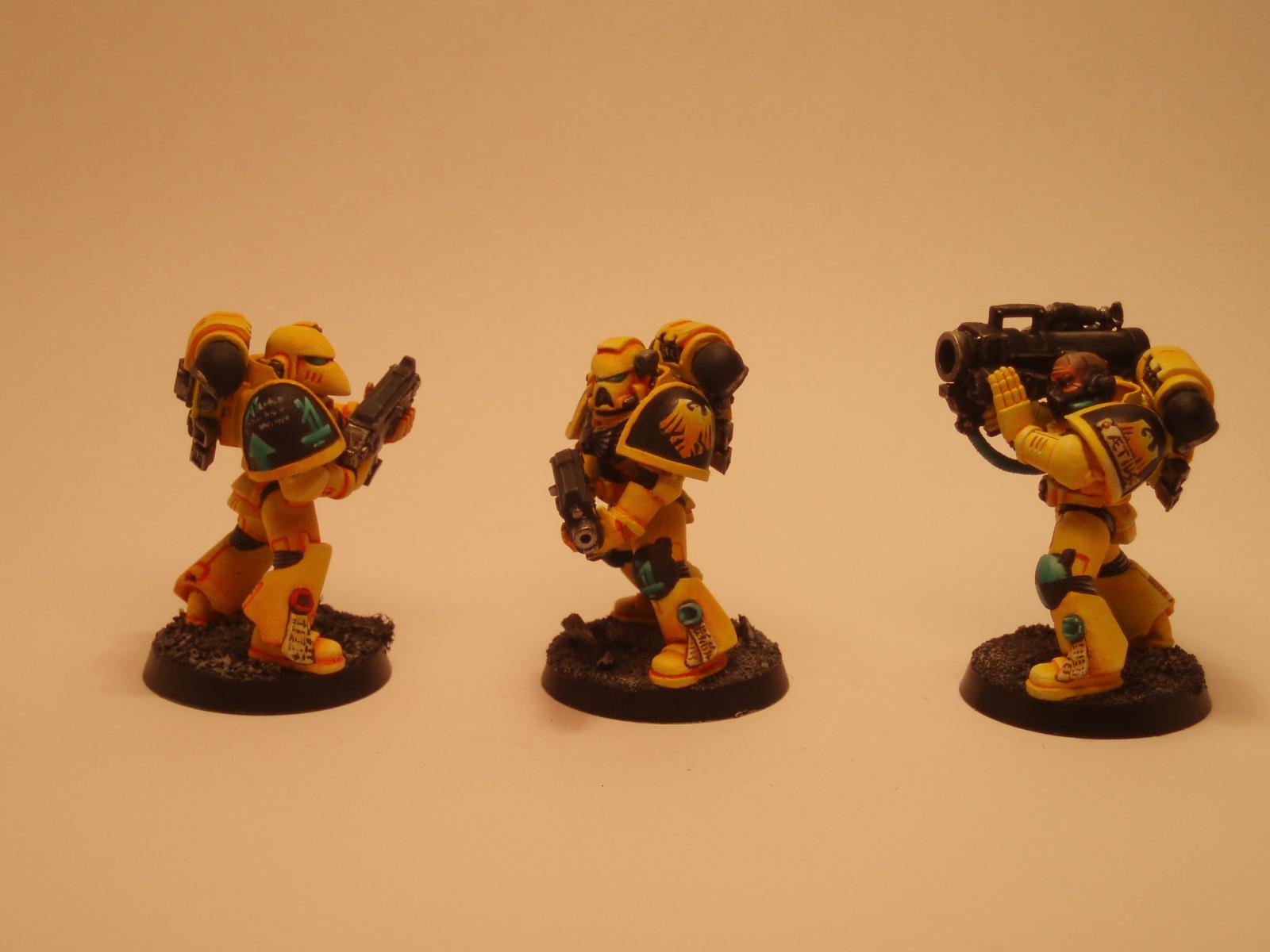 The chapter badge is a Raven Guard transfer, painted over.
Photo are a bit dark, my camera's crappy ... Hope you like it, the rest of the 1st tac squad will soon follow

Perfect minis... nothing to add

My WIP-thread of evil space marines [status: in stasis]

Chaos sorcerers and dark mechanicum work tirelessly to come back from the Warp.

Wow love the shoulders, mind giving your recipe out for it(the teal on black)!

Really wish I could think of something bad to say about those...um...'scratches head'....um I don't like the colour.
P.S. I play Lamenters

whats your recipe for that yellow, its gorgeous

I can only echo the others, really nice work!

That yellow is perfect. I agree with Iron_Adam, recipe and perhaps a tutorial if you dont mind.

Signature not compliant with forum rules


Have you tried taking some pictures outside (weather permitting)? Sunlight really shows up a model better than lamplight.

Thank you for you kind answers. I will try to take better photos for the rest of the squad (now finished).

Here are my recipes :
- Yellow : base with a mix of Sunburst and Iyanden, maybe 60-40 (to keep it bright). Highlights with sunburst, then sunburst + white, up to pure white (on the helmet for example). Shadows are made in mixing blazing orange and base, and with scorched brown for the last ones. Ah and I forgot, white undercoat !
- Teal : I have to make the freehand with white, and then paint it again with Prince August Emerald (838)... Shadows with Hawk Turquoise and highlights with white.

Hope that will help !

Yellow marines are a pain, but the result is always great I think. Would have done Lamenters, but I hate chess and didn't want BA successors ^^ (yours are really great btw Lamentermarine).


"That which does not kill us makes us stronger"

that is some nice clean painting

Perfect minis... nothing to add

QFT Theses really are perfect, good balance of three colours painted beautifully. will be watching this very closely. After the tac squad what are you planning next?

Any votes or comments, good or bad, are greatly appreciated.

Colour of the Week..... P3 Coal Black, Just discovered P3 but am itching to get more. Lovely to work with.

I've bought a Sanguinary guard box & a GT squad, along with Mk III and RG vet parts from FW. With all these bits, i'm planning to do another Tac & Sternguards, a Captain and a librarian. All will be far more kitbashed than the first tac which is "standart".

But I'm currently painting a landspeeder

Can't wait to see more! When I first saw the SMP pic I wasn't sure about the green as an accent colour, but once I saw the painted mini's I had to change my mind, it looks awesome! Beautiful job in general, especially the (very clever) work turning the RG badge into a phoenix!

Indeed Cpt Lysimachus, I made a test mini before being myself convinced by the turquoise^^

Here are the 4 following brethren of the 1st tac squad. I've tried to have slightly better (brighter) photos.

The rest of the squad's incoming 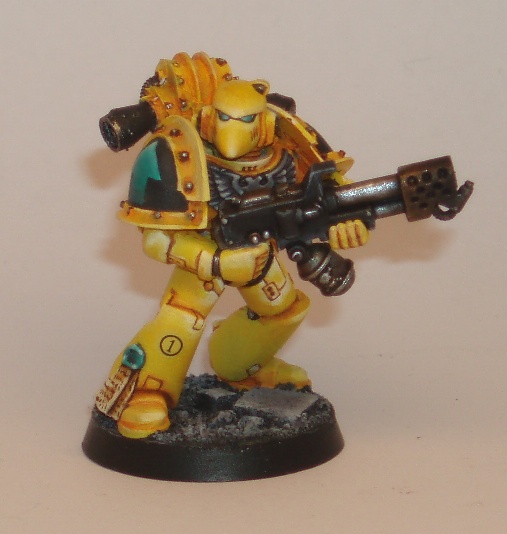 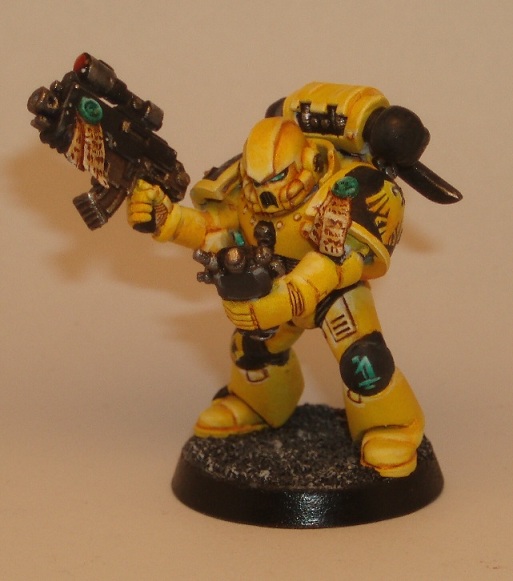 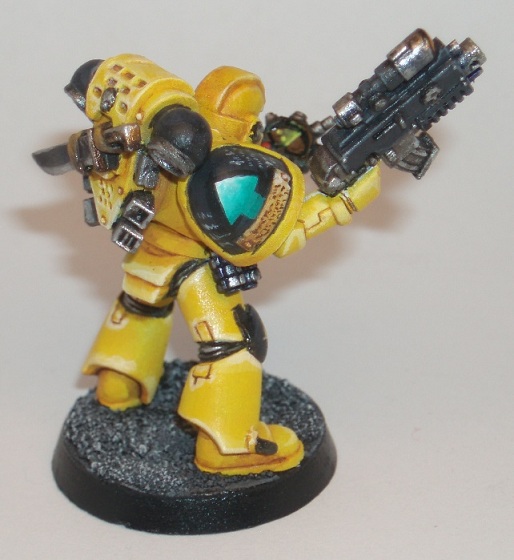 And finally Brother-knight Tully, leader of the 1st tactical squad of the 2nd compagny. He is the youngest sergent of the compagny, and the last one promoted among them, but his ability to take initiative and his predispositions to leadership earned him the confidence of Lord-captain Oberon. 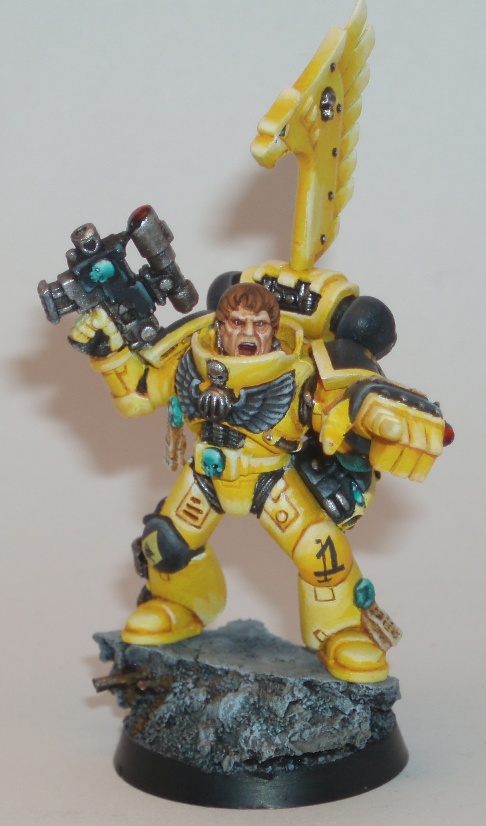 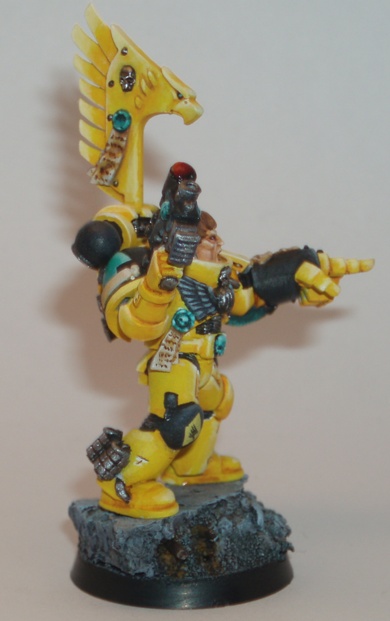 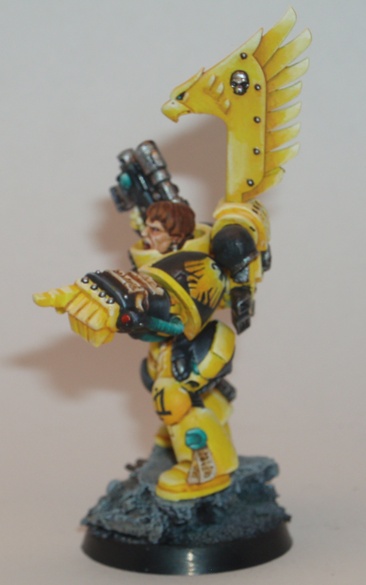 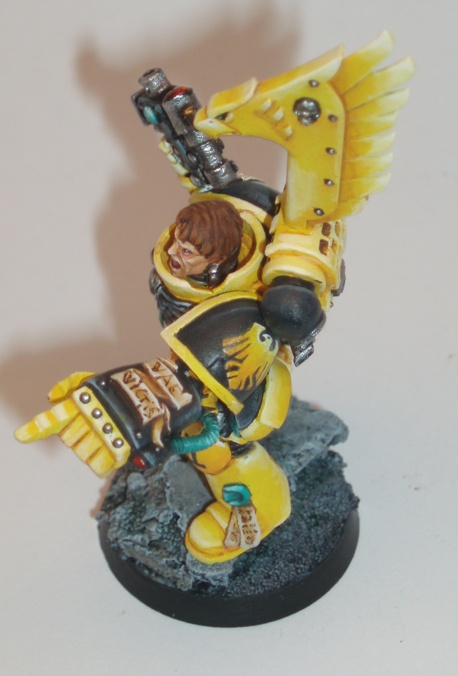 Very nice work tehre matey, I like the contrast between the pale yellow & the turquoise, looks quite eye catching! You certainly wouldn't miss them on a battle field haha! Really like the SM with the auspex.

Spectacular! This color scheme could be awful in lesser hands, but you make it shine. Love the subtle conversion work as well.

Managed to take a group shot

The landspeeder is ongoing, followed by converted plastic sternguards and a librarian.

Ah nothing like completing a squad. Very nice. You cartainly know how to paint yellow well. Looking foward to the speeder. Will help me with mine.

Sorry just had to lol

Very nice stuff, this army just gets better and better. Love all the little touches like the reversed coloured helmet on the sergeant and the Mk III bits on the tactical marine.