Yeah Brother,
I've passed the sell them stage, they're not going anywhere.
Now it's time to fully accept the new normal, we all know it isn't going anywhere, and to devise some head canon to allow me to be excited to use my boys within that setting.

A thorough compatibility check will be done to see which potential rules set I may use going forward.

Cripes, 70 pages of nonsense.
Yay me.

I was thinking of quitting the dark angels because, they are not as easily powerful as other sm armies.

but then a friend of mine invited me to something else. something big, apocalypse.

alright he does get a game of apocalypse every week-end. but then he can use everything.

So now I am following the same pattern with my 9000pts (all painted) of firstborn, RW and DW. they are are going on full scale apocalypse.

but I have some primaris, they'll come from another company.

And moreover, please wait for the 9th edition to come out. maybe the firstborns are going somewhere.

Lolz, maybe I'll wait and see.
The urge to go dark is strong; but will be a crap tonne of work to make it work.

I should invest in the new Apoc rules, playing large 40k just doesn't work anymore.
I hear it's a great rule set.

Cripes, 70 pages of nonsense.
Yay me.

Haven't touched a brush for over a month till I saw your Dreadnoughts again.

As so many other mention Stobz, it would not feel like the Rock without you here, 'caring' for our 'well-being'. 😉

Also your painting is bloody inspiring.

Primaris were intended to cause conflict amongst the legions, sorry! I obviously meant chapters! (Jes Goodwin said so).
'first born' marines are with us for at least the whole of the 9th edition, Stu Black said as much when he mentioned his own 3 companies of non-Primaris.

Now I know a (40k Studio) Lord of Terra clearly can't be trusted but if I can suggest G8Keepers suggestion might be a way for you to add Primaris deemed 'Stobz' worthy?

Something like the trusted brothers of Consecrators perhaps? (And in no way a chapter of Dreading enthusiasts!)

Couldn't you just designate your DA as a 'historical' force, representing the Chapter in the years immediately prior to the birth of the Great Rift/arrival of the Primaris etc.

It would be no different from people who collect armies set in other time periods, for example the Badab Wars, or Age of Apostasy. I mean certain 40k armies have to be historic rather than contemporary (Astral Claws for example, or Fire Hawks).

That way you can ignore the introduction of Primaris and the new lore, and just concentrate on the aspects of the hobby that you enjoy.

The only potential problem would be if Firstborn marines are phased out, and their rules no longer exist. But you know that won't happen as long as GW continues to sell them, and if all the doomsayers are right and the range is discontinued (not convinced myself but whatever), you know they'll moved to Legends and have permanent rules there instead.

They’ve phased out stuff in the rules before but I hope GW isn’t stupid enough to wipe away millions of dollars of our collections.

Thanks Lost, can't wait to see what your next project is.

Fierce Bear: it's a valid idea, but I don't like the two scales in the same force, it looks horrible to my eye. Any option for this army will be totally without Primaris in it.
There are still masses of the Classic range I want to buy; GW don't need to worry about that unless they make Classics into Legend, because I won't waste money on things that are going away. Nor will I spend on the new replacement options because they make no sense tactically and are not my thing aesthetically.

Hulk mate: thanks for the advice, ignoring is impossible and futile, Primaris are on the tables near me all the time. Nearly half my group use them and we play in the current timeline. So I need fluff to enshrine my army's position against the betrayal of the Emperor.

Fajita Fan: I also don't think Astartes are going away anytime soon, but replacement is a different thing to redundancy. If my boys go Dark to rebel against the betrayal they remove the redundancy issue.
Now if GW handwavium makes both the 8 and 10 foot tall Astartes 2W,2A and gives them all access to better bolters and ammo they also stop being redundant, but I'm not waiting a decade for them to shift mindsets again...


So; Hello Darkness, my old friend.

Maybe when the Lion returns it's because of a combination of Land's tech and Bile's shenanigans.
And combined they create a gene implant that makes Astartes equal to Primaris without the awkward height gain that stops them using Astartes vehicles.

The Lion would seize upon that to boost his current Legion without needing to wait for attrition or risking the Rubicon.

Until the Sword is reforged

Just to toss in my two cents, I'm really happy to hear you aren't selling your army- the range you've collected, and standard you painted too should be something cherished whether you decided to retire the army or not (assuming storage and finances aren't a problem of course). And whatever you decide, I hope you'll be able to stick around here- you're part of this forum and community that'd be greatly missed.

On how to proceed, obviously only you know what's best, but I'd hate to see them repainted as fallen/renegades. I don't know if it works for you, but I've been trying to reconcile height differences between firstborn and Primaris through taller bases (putting a piece of cork on top of 32mm base for firstborn). Obviously not perfect and you can see it if you're looking for it, but I've found its made the difference palatable for me at least. I had the same problem with old CSM models as well- the old DV chosen, then new CSM range, Thousand Sons, and Death Guard all seem to tower over the old kit.  Not sure if that'd be a problem for you running running your army with different rules.

The lore idea I had that's in the same vein your original idea but not quite as radical, is to try and leverage off the legion-building and secrecy aspect of DA's, plus the idea of 40k history and codex as being written by unreliable narrators. Sure, the official story is Azrael said Primaris are in and everyone said ok, but does that sound like the DA we know? Or was there probably an awful lot of DA and successors who weren't cool with that idea? Maybe what they actually did was form multiple "3rd" (or 4th or 5th or...) companies, some with only trusted firstborn marines, and some for show with Primaris. And if anyone asks any questions about why there's two 3rd companies, well, the galaxy is a big place, accidents happen, and its not like the DA would ever keep a secret from the Imperium. And we know there's circles within circles within circles for the Ravenwing and Deathwing, and not much evidence they are kept to 100 members each. So even if a few Primaris are being inducted, they may find they're not being inducted very far. And if they can't use the same transports or teleportation technology, well then how many crucial missions are those Primaris actually going to go on?

Anyway, that's me rambling way too long in your thread, but I hope you find a way to continue to find joy in your Dark Angels army whatever you decide.

I mean... That doesn't at all sound like something a clandestine, secrecy obsessed, order of warrior monks would to do...

Well, the goalposts constantly move in this hobby.

With the confirmation of 2W  Astartes it's worthwhile putting some effort back into my Battle Company.

Next project, get these bad boys underfoot: 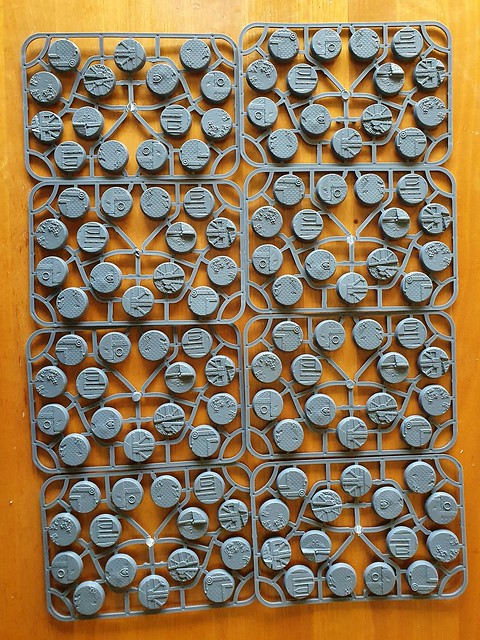 The extra bonus of GeeDubs wise change is that it no longer seems weird having vehicles with crap drivers in people's Primaris armies.

It's removing all those models from the old bases that makes me feel sick. That being said, so glad you've got some DA mojo back dude!

Yikes, just read through this, I'm glad you've come through this test of faith with resolve befitting the chapter.

There's nothing new stopping you from putting the grim darkness back in 40k as it should be.

It's an amazing collection and the tributes listed demonstrate the impact your skills have had through the community.

Another small project for the pile of shame: 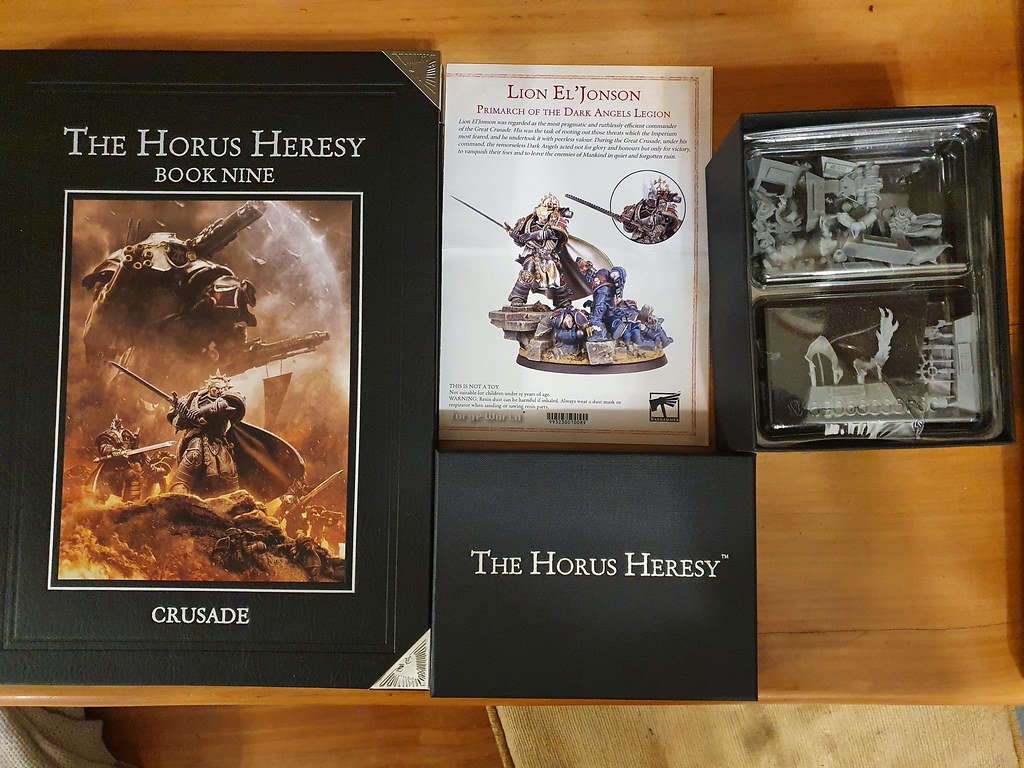 Man I need to finish my Titanicus project soon, this one is going to tease me rotten until I get it done......

Progress has been made...should have them done by Friday then it's 20 Assaulters and 20 Devos after that.

The 'footprint' change is massive, so much so that they no longer fit in their storage container. First World problems 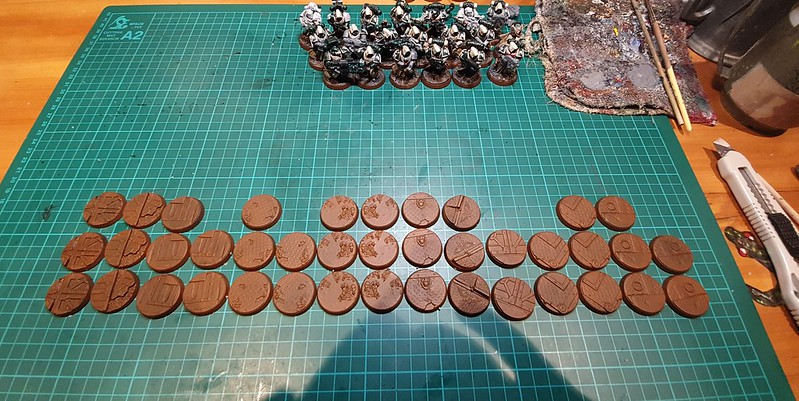 Will work on finishing up the changes in weapons and shoulders on the robed guys bit by bit so they have the same look as their peers.

Then maybe I can move onto their Bossman.

You're a better person than me.

Tacticool Squad 4 on their new bases. For minis I painted nearly a decade ago they are holding up alright:

Feels good to be back on the Greenwing log, the other Wings are freaken fantastic but these feel like me.

Those bases are really cool. How many greenwing brothers left for rebasing ?

Also tagged with one or more of these keywords: Dark Angels