So first and foremost, the idea for this army is shamelessly stolen from army310's WIP thread, which is found
HERE

So being a goody, goody Emperor loving loyalist I haven't ever considered collectiong a Chaos army, but have always like the Thousand Sons style. This was bolstered even more by the Horus Heresy books, A Thousand Sons and Prospero Burns. At this stage I was considering a Pre-Heresy army, so I scoured eBay and secured the awesome Sorcerer Lord (read Magnus) mini 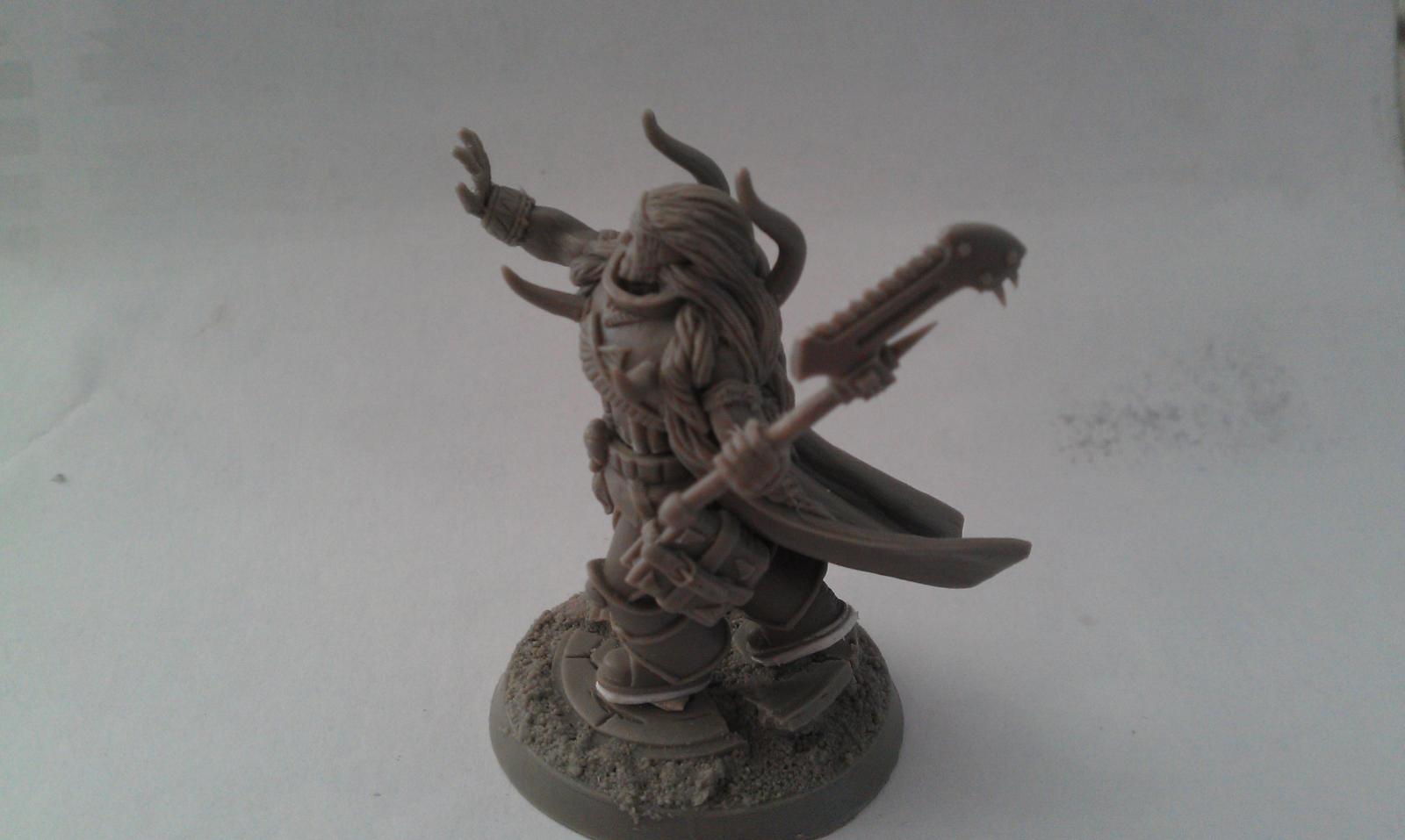 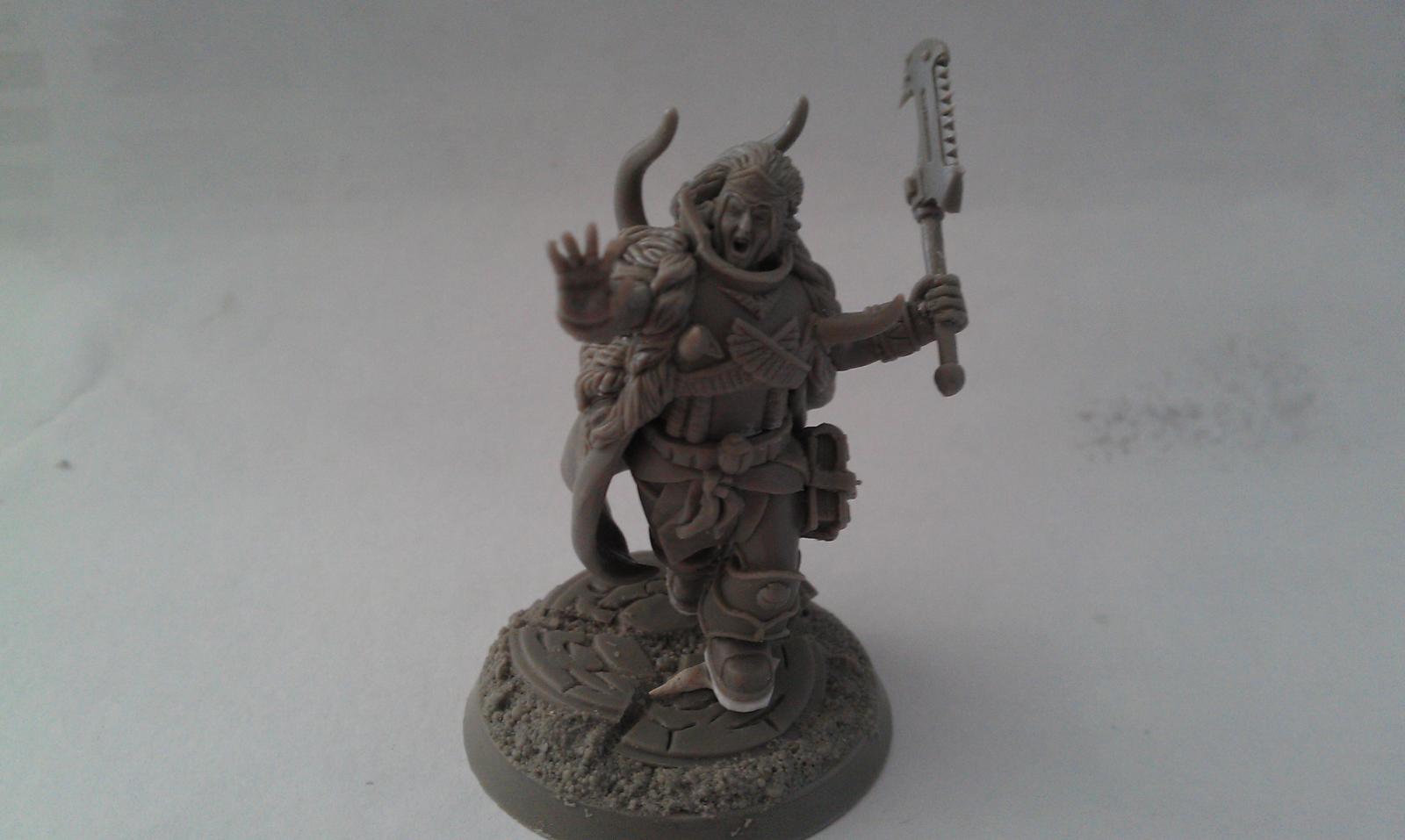 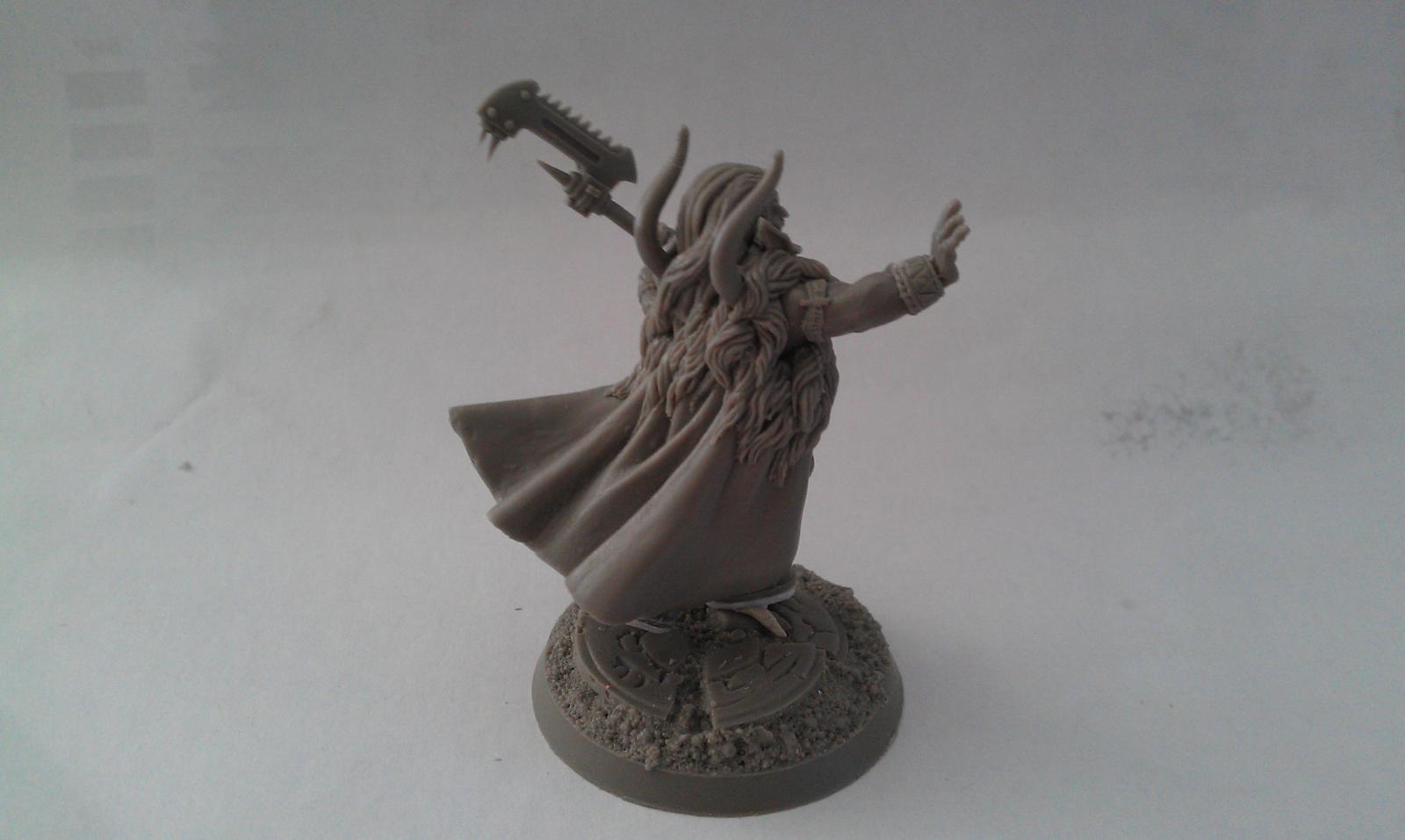 Then I discovered the afore-mentioned thread of army310 and the idea of a counts-as Grey Knights army sounded really cool, so I decided to go for it. I then searched eBay to locate the "Egyptian" styled conversion bits and take it from there. This brings us to now. I need the opinions and ideas of all of the great modellers and converters here on the B&C.

Having recieved the Egyptian SM parts, imo, there seems to be alot of "eye" type markings of which I'm unsure about, so I've mocked up two leg/torso varients, the first uses the Egyption torso, TS'd in the usual way, and the second uses GK termi torso's with the rear vents cleaned of. Construction time-wise they were both quick and easy and came together in the same amount of time, with a similar ease of construction. I like both mini's and am having a hard time making a decision.

So here's the GK termi version 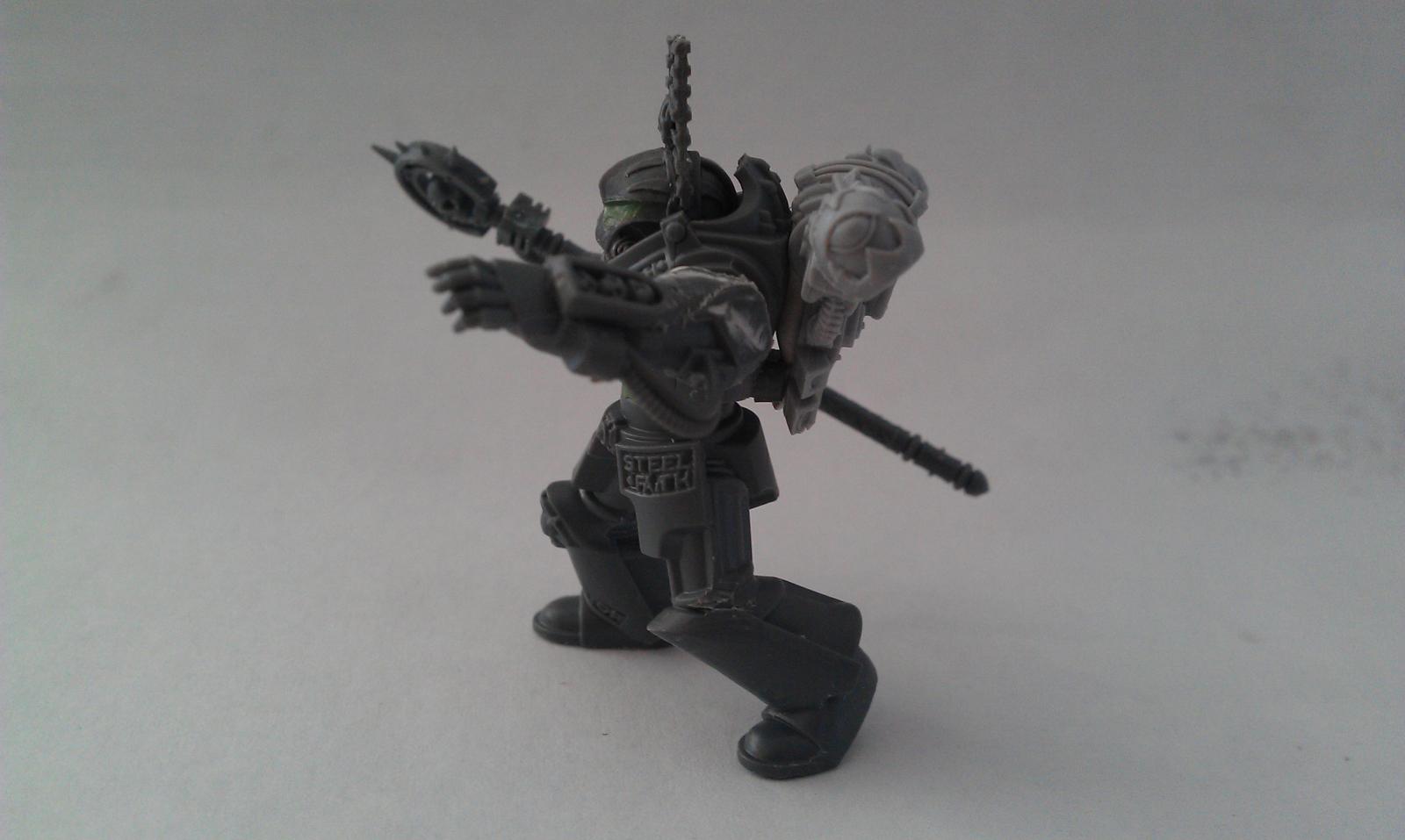 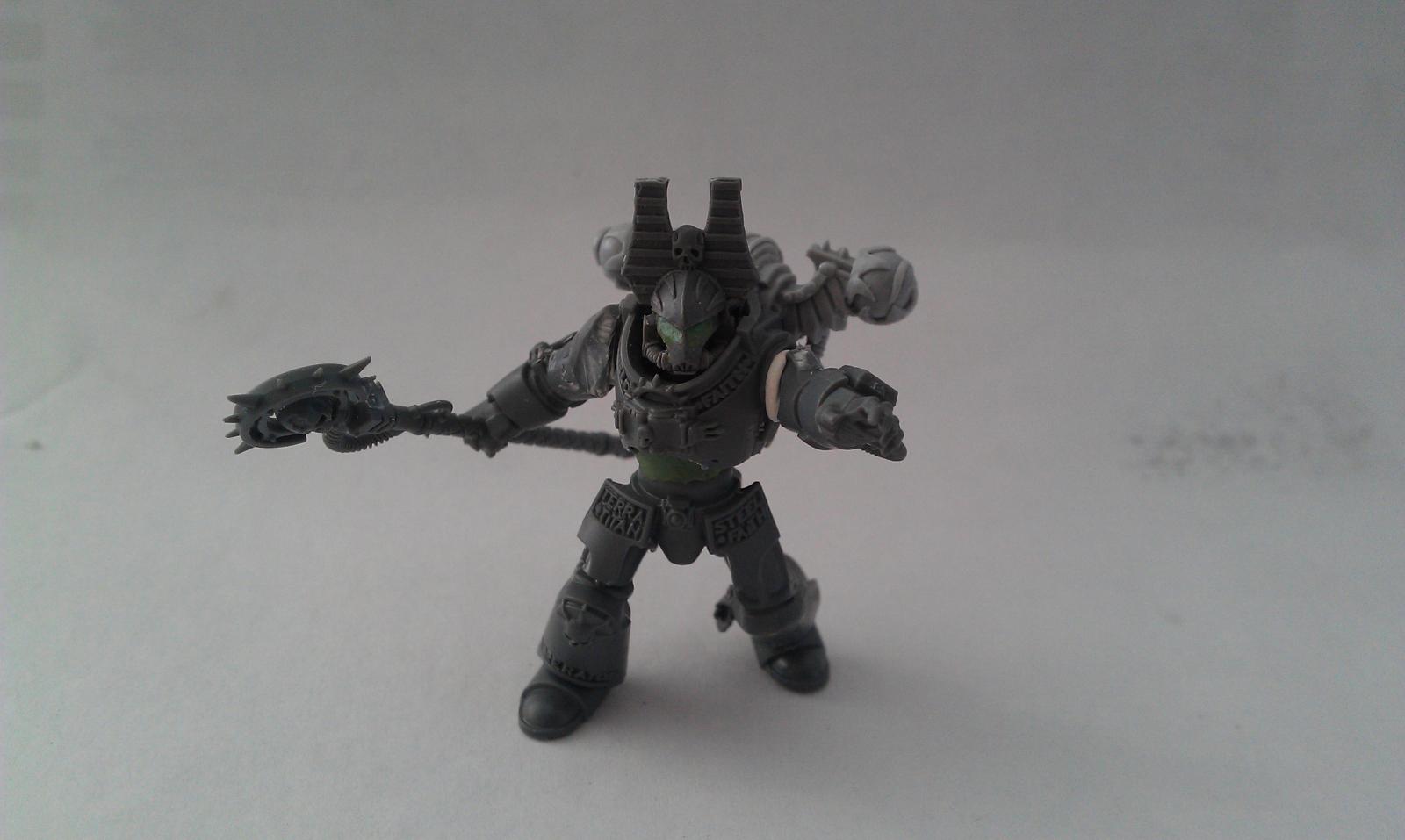 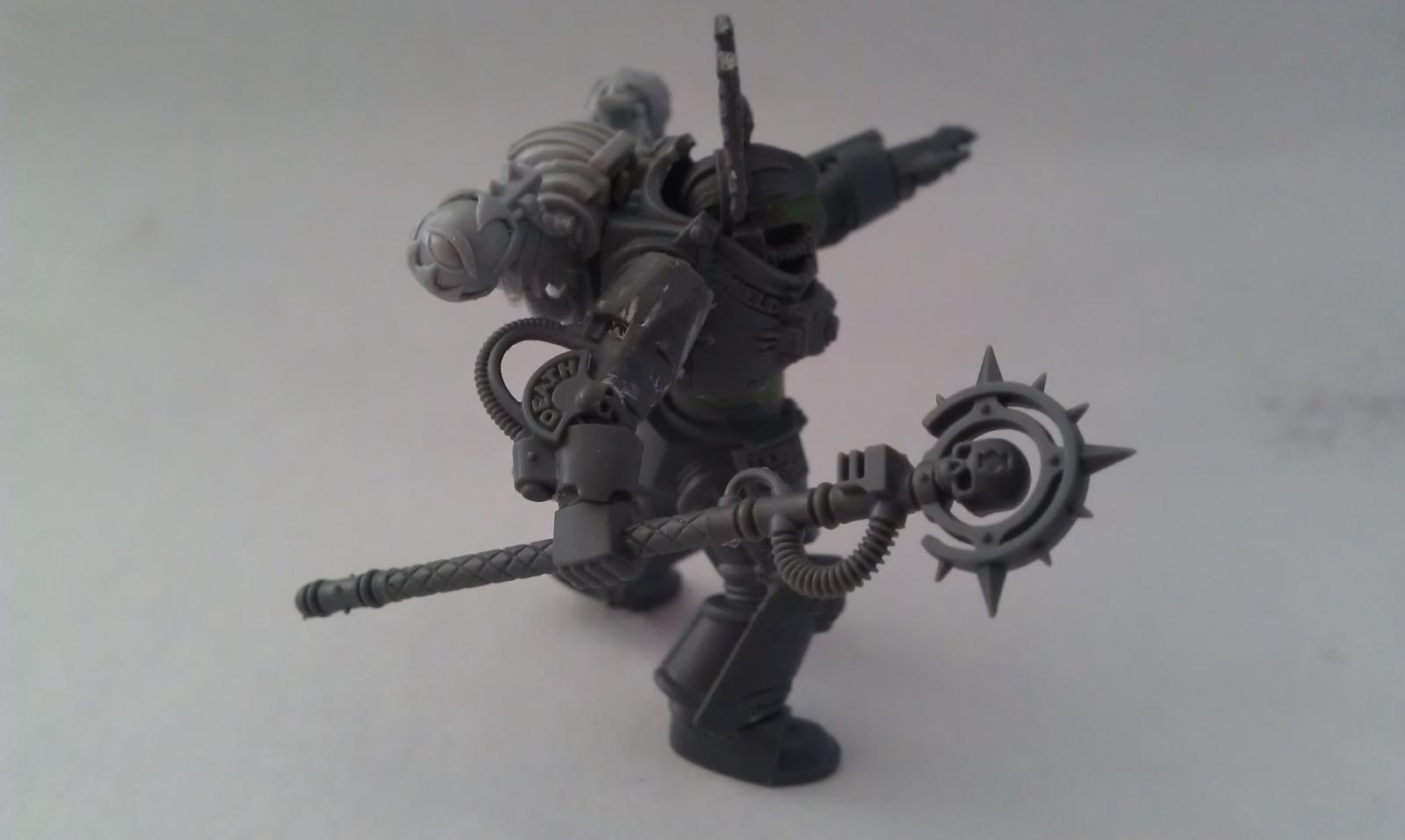 ...and the Egyption torso version 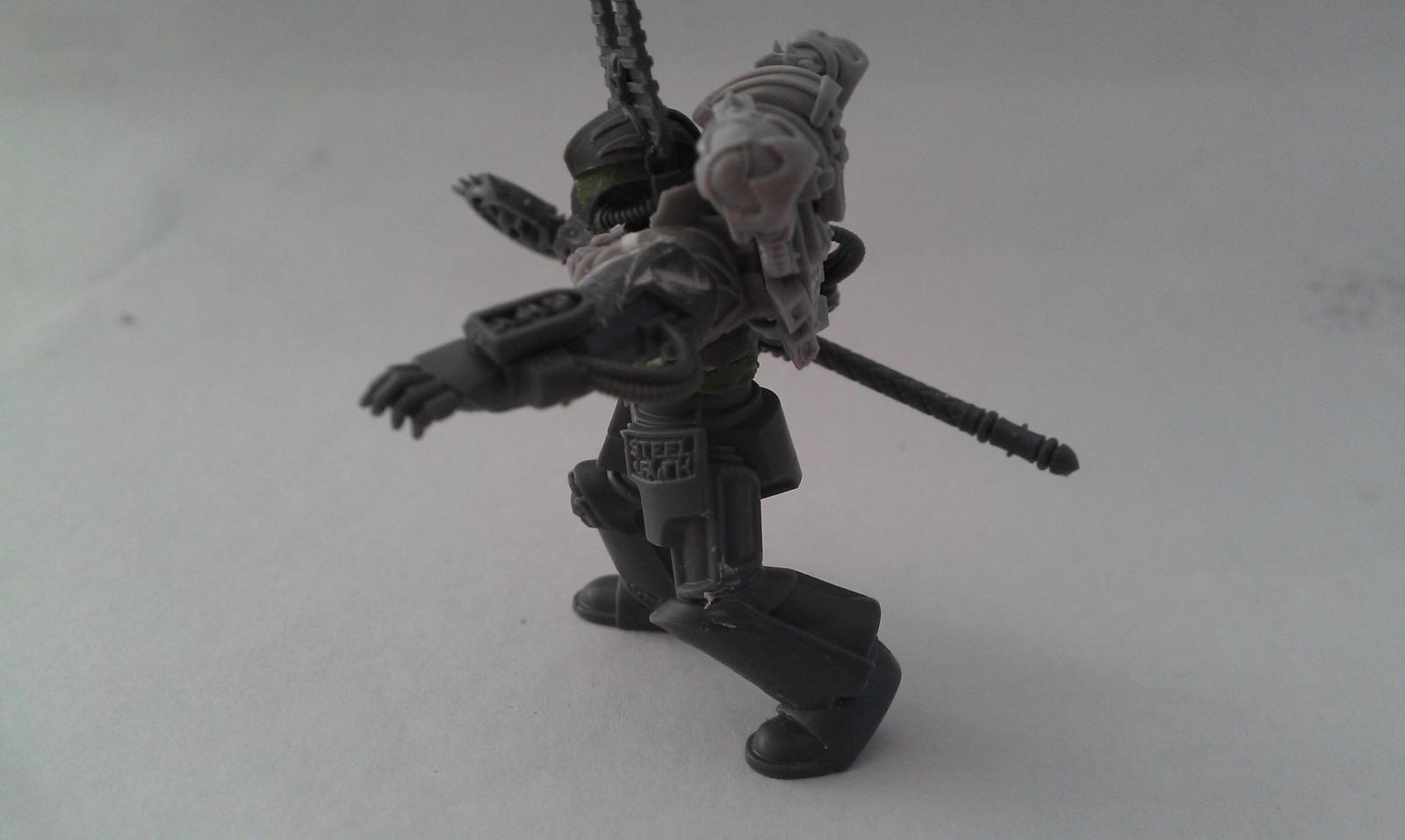 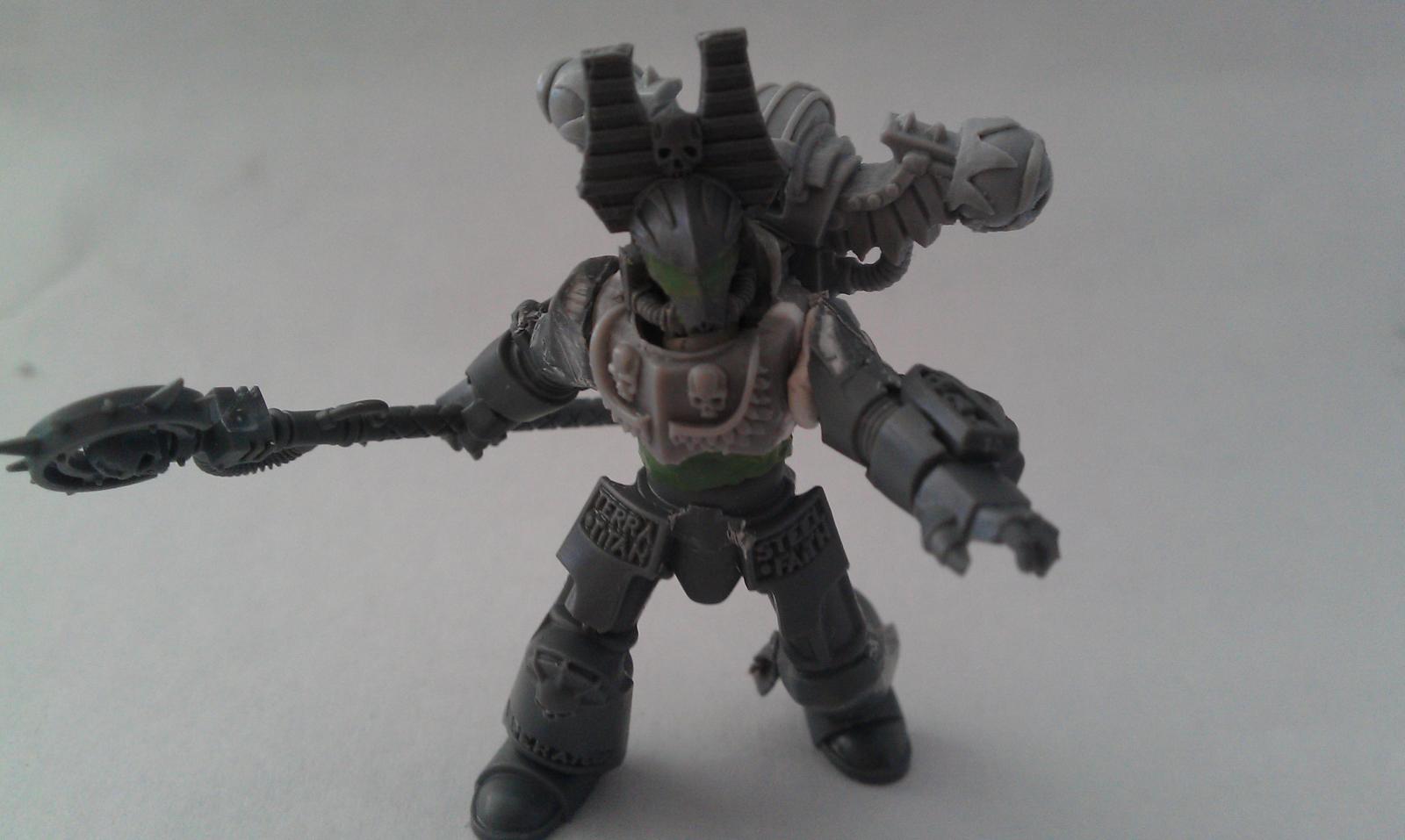 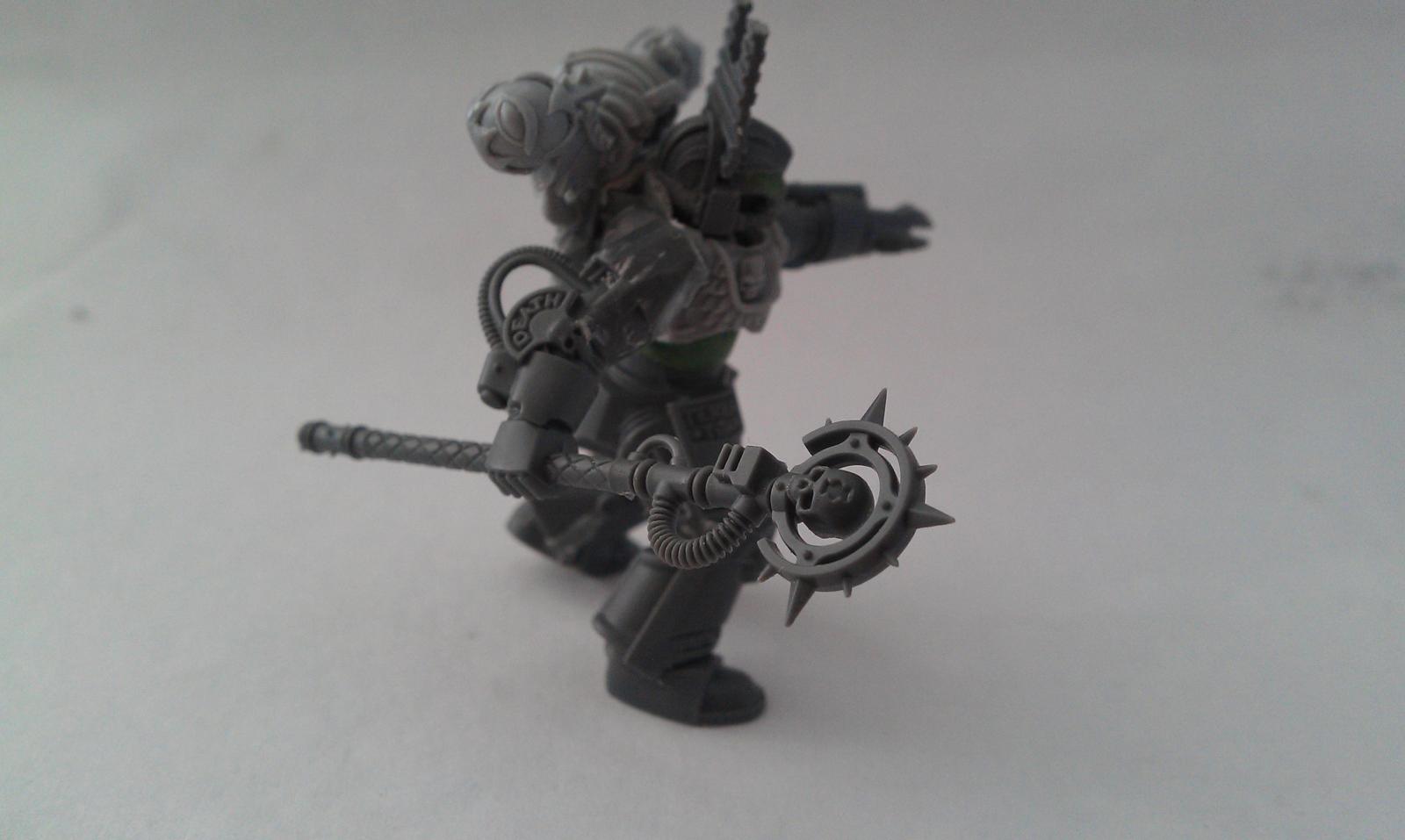 This guys are pre-GS (besides the spacer-blob in the torso), so the legs will be filled, a belt added, these are purely for making a decision.
(... the astute of you will have caught the GS-filled eyes, as the DH TS's are all soul-bound, they cover the helm lenses) 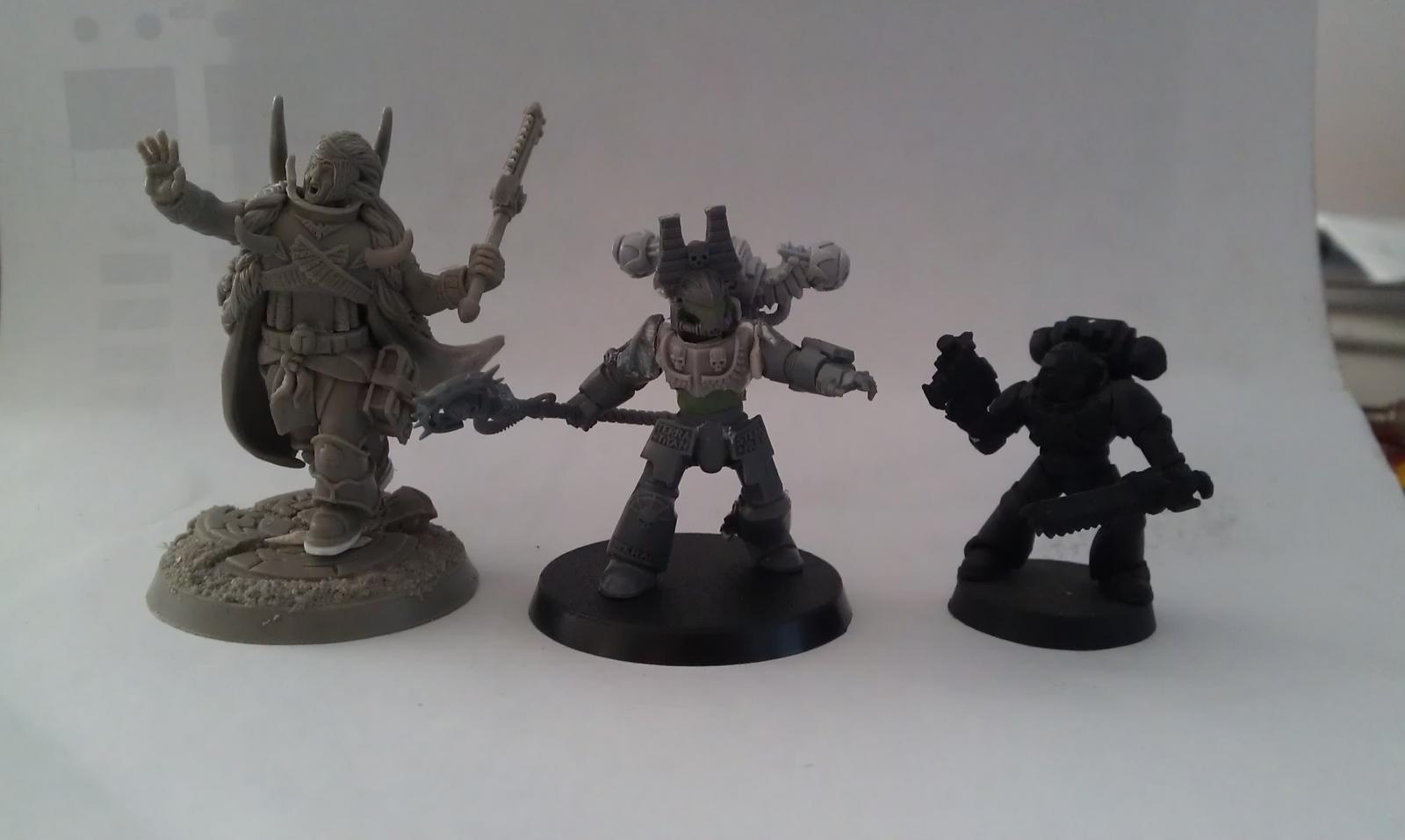 
P.S. If True Scale is your bag baby, head over to my other WIP in the Dark Angels sub-forum, found HERE

I like where your going with these especially since their True Scale and I love True Scale. Keep up the good work.

very nice! Makes me almost one to built myself!

Wow so many constructive comments

I personally like the GK torso version better, as the other one looks less bulky and makes the head, arms, legs and especially the backpack look a tad too large and out of scale.

The pose itself is great, and I'm really digging the extra armor plate on the left wrist, which is a nice little detail I am so gonna steal for one of my Chaos Sorcerors

I really think I have this too. Nice to know it has a medical sounding name lol.

I'm curious to know who made your "magnus" figure.

Also I think the GK torso looks slightly better than the egyptian one.
However you could still throw some of those in for some change

I think the egyptian torso will work better once youve added a bit more detail around the waist. I think at the moment it looks slightly top heavy.

I think the egyptian torso as well. If you do them as pre-heresy then the Eye of Terra, not Horus, would be present on their armour so no biggie with that in the armour, IMO. It could also be the Eye of Magnus, if you want to call it that, tough not canon it is still not at all far-fetched that the TS would have that as inconography.

I am subscribing to this thread with delight. Thousand Sons are one thing, and Dornian heresy is another. But then you go and throw True Scale into the mix, and you've taken the hobby to a whole 'nother level.

Hey guys they are from irina_est on eBay, they're item name is "Egypt Style Galactic Knights Conversion Pack". 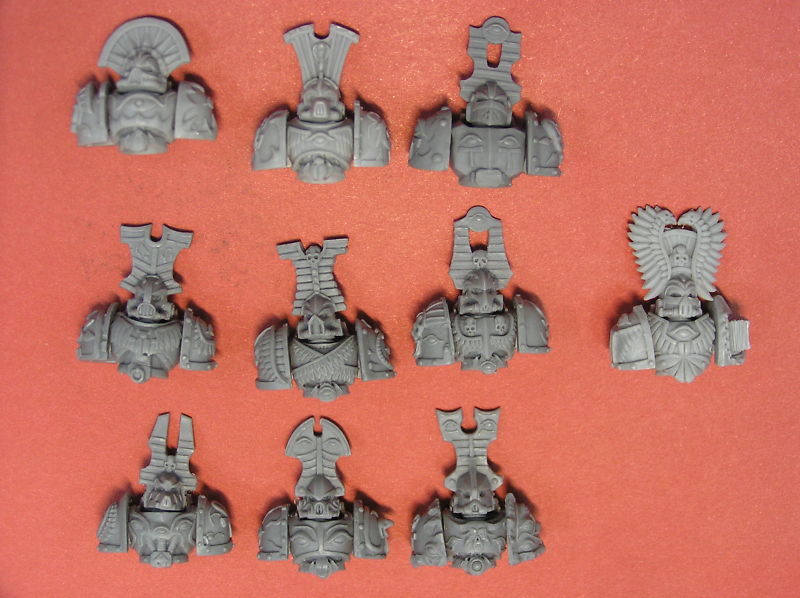 They are a little on the pricey side ($50AU) but the quality is there, I didn't have any miscasts or bubbles, and be quick they sell fast.

EDIT:
Forgot to add, there are new termi versions available 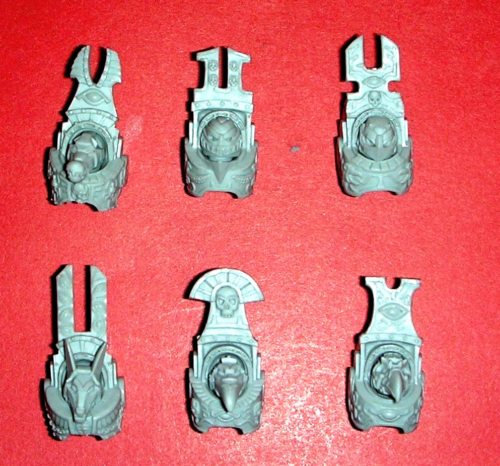 Magnus is from mrs-velard on eBay and is titled "Socerer Lord", week to week varies in what is available, but I have also picked up Horus, Mortarion, Gulliman, Dorn, Russ, El Johnson, Angron, Custode Valdor....I think thats all of them, and they're resonably priced at $25AU, cast in resin, again I am yet to find a single air bubble or serious miscast.

On the decission making front, i think I'm gunna go with the Egyption Torsos for two reasons, 1. It seems wastely to have spent money on them and not use them, 2. I can't bulk out the waist as much as I want to (i usually go OTT with pouches, grenades, knives etc on all my marines).

In regards to the large amount of eye's, I'll try removing some without ruining the pieces, I'll see how I go. 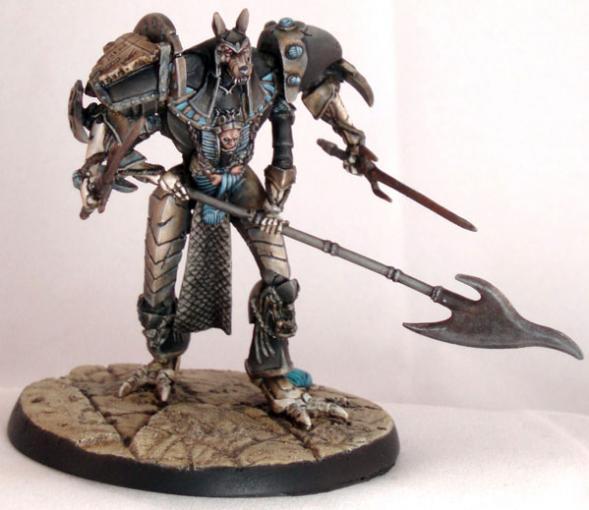 So after an hour or so with a sharp hobby knife and a little care, I managed to clear up the excessive amount of eye's on all of the torso's and most of the shoulder pads, the following six are, imo, deemed a write off 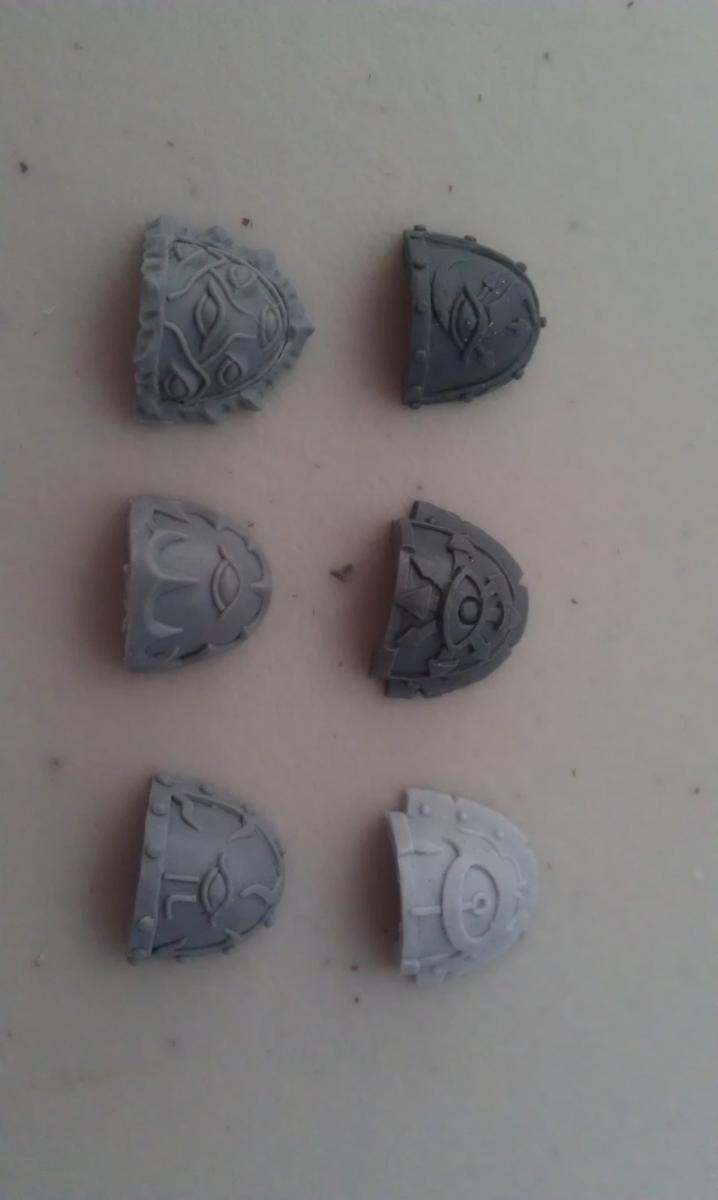 first one in with a PM can have these AS A GIFT, I don't even want postage.

Hey man. I would say most of those pads are salvagable. Thers nothing saying the Dornian Herasy TS wouldn't have eyes on their armour. The only one I would really be getting rid og the the dirty-great chaos star. All the rest just look like various hiroglyphs and such.

Still, if you're wanting to give them away, I'll take em, hehe. Even live in the same country so cheap postage 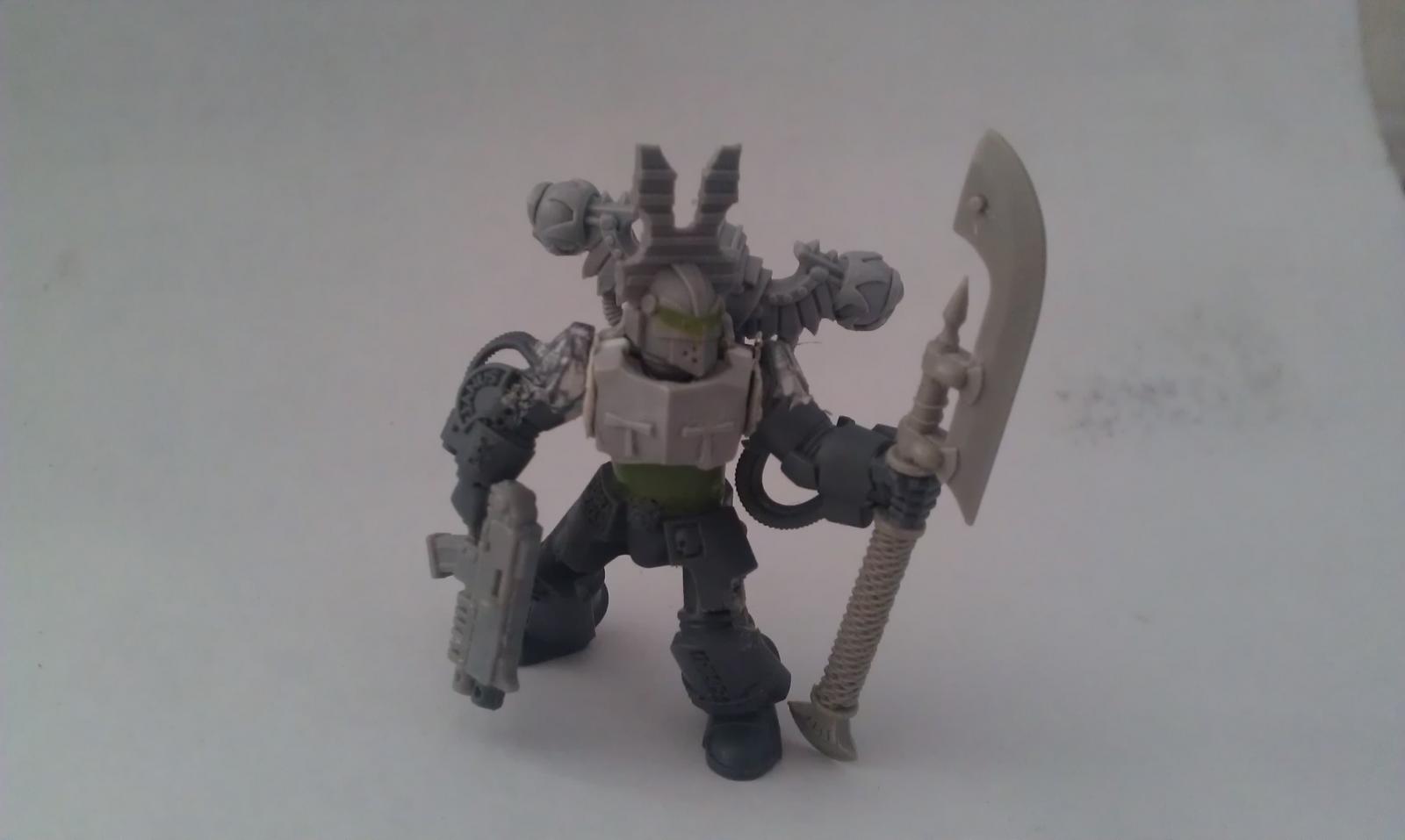 Not being a fan of the wrist mounted stormbolters, I've been using the following solution/s 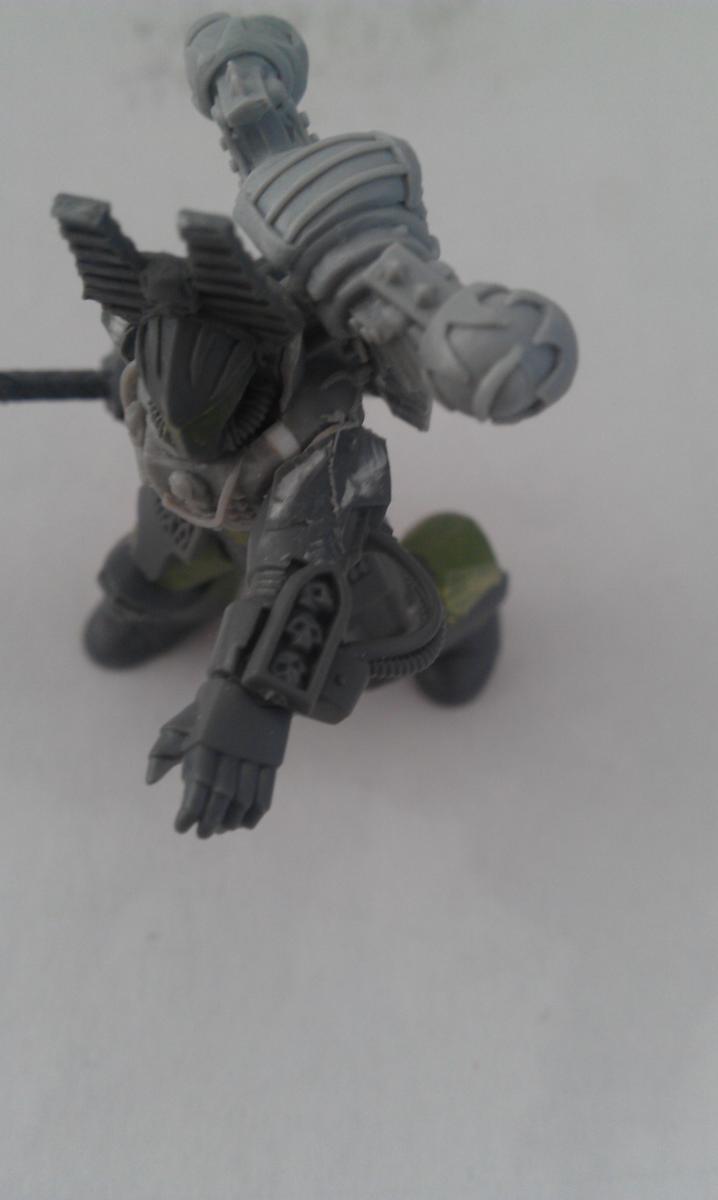 How quick was that? 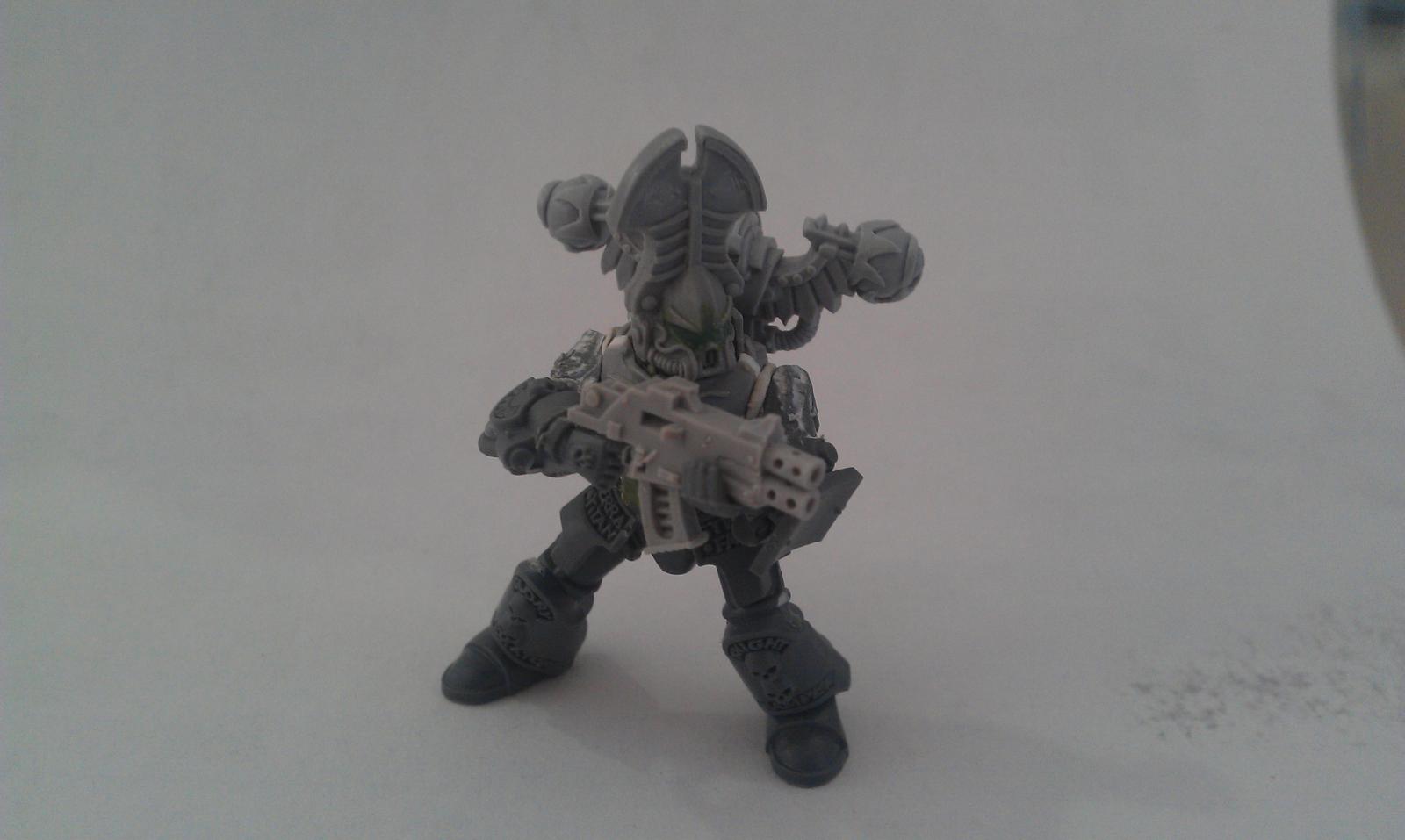 This style bolter will be my "counts-as" storm bolters

Sexy. Shame I missed the competition in previous posts.

Wow, more progress, I haven't been this motivated hobby wise since, well the mid 90's..... 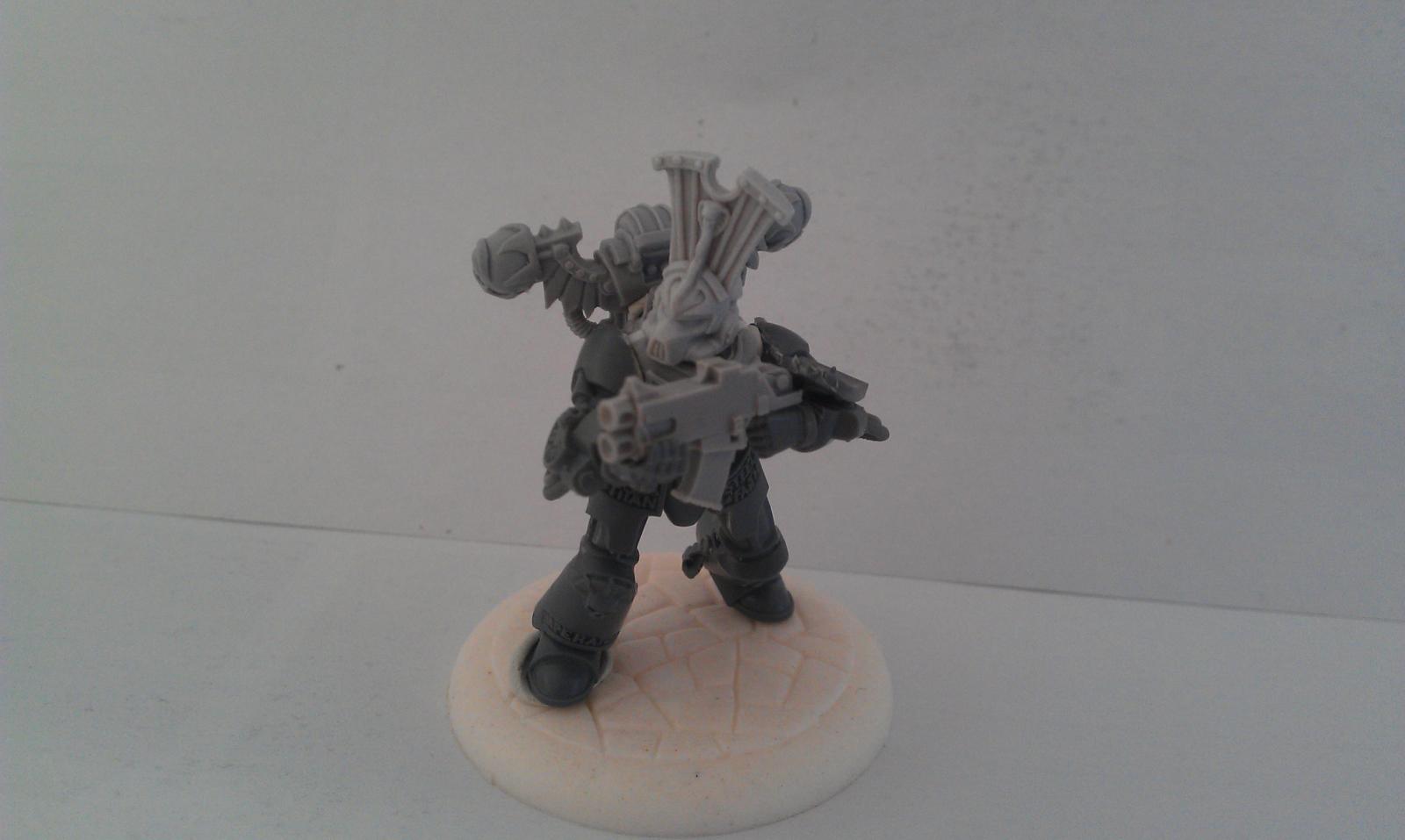 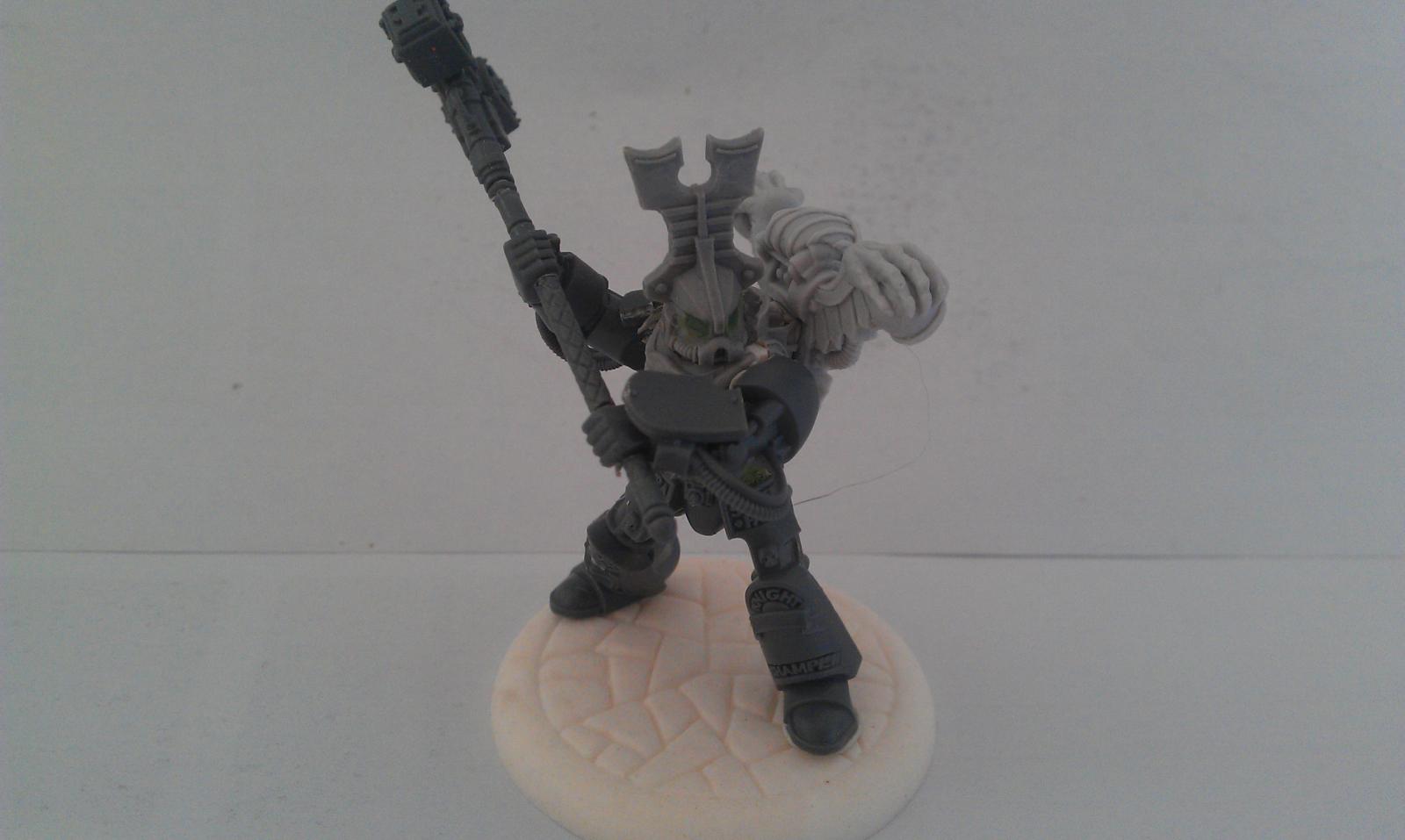 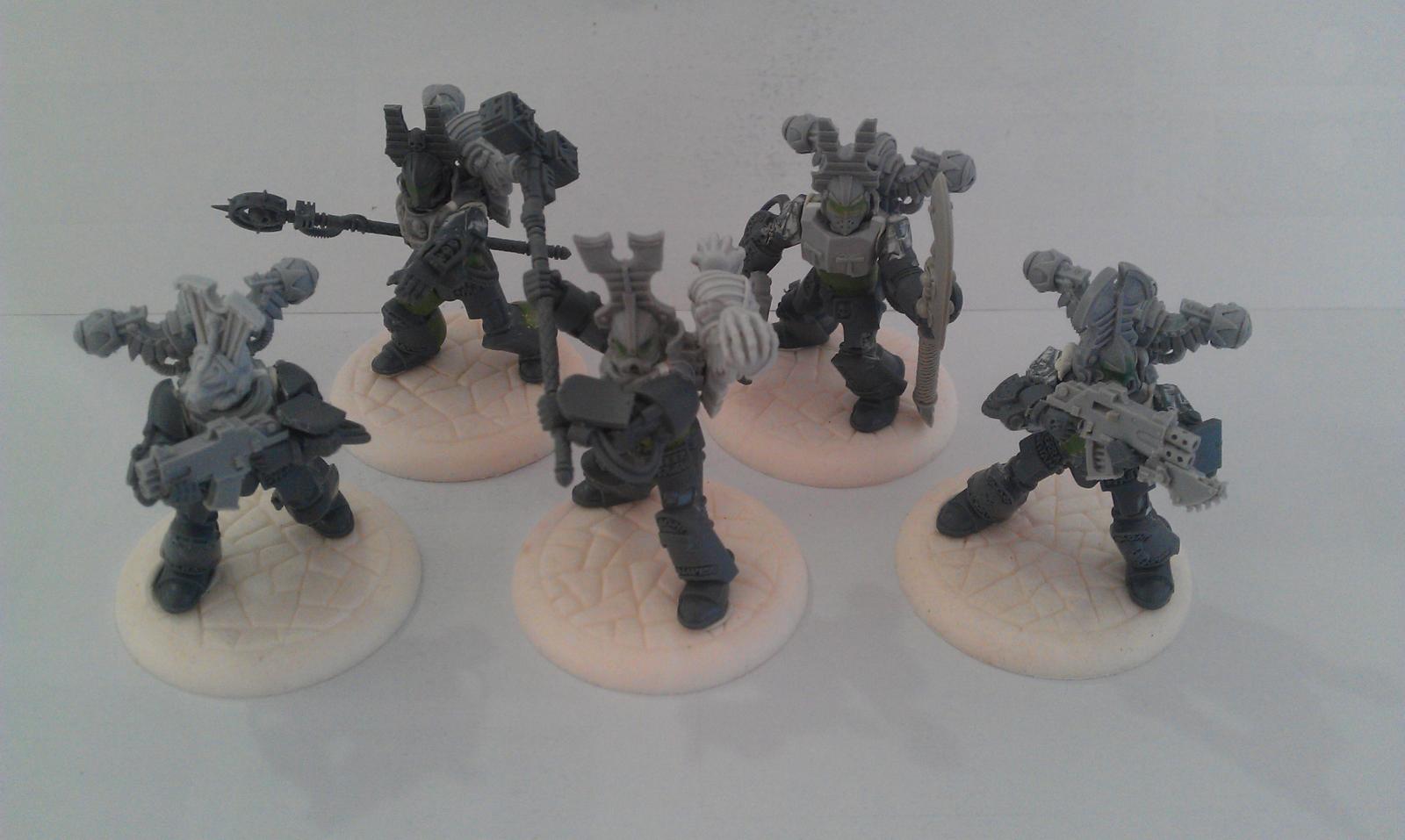 So these guys are tacked together for posing purposes and need most of their GS work.

They're already standing out from all the other forces out there

looking very cool I can't wait to see them painted.

QUOTE (Death Wolf @ May 22 2010, 10:41 PM) <{POST_SNAPBACK}>
THEY ARE THE SONS OF RUSS OF COURSE THEY ARE THE BEST TROOPS IN THE GAME!!!!!
"Only in the Space Marines of the Legiones Astartes are courage and expertise perfectly blended. In other troops they are present in varying degrees and proportions, and many scholars have debated their relative merits.
For my own part, I come down on the side of courage. For courage can sometimes make a virtue of inexperience. I myself have commanded Imperial Guard troops whose probitor units have achieved great things, because they were too inexperienced to realise that their goal was impossible." (Leman Russ on the military use of Whiteshields, De Natura Belli, Book XIV)

They are coming along so well. Cannot wait to see some paint on these guys!

I really like those helms. As others have said they really stand out even without paint.

Or sutin.
IA: The Sons of Penance