2011 is slowly coming to an end, and it's been a pretty crap year, for me anyway.

So I figured I'd make a few goals and see what I can manage before new years, and one of those was to redo my entire Enclave army.

Much like how a journey of a thousand miles begins with but a single step, so to will this blog.

So, if your interested in seeing a 200+ model army get completely renovated, and ideally painted up to a.. somewhere between tabletop standard, and whatever we're currently using for the 'best' models standard, then stick around! I'll try my hand at realistic blood splatters, object source lighting, conversions.. All that stuff and more!

Pictures to be uploaded in about an hour, camera's gotta recharge more.

What's in a name:

New Reno or bust is the home of my Enclave army, and the related stories and artwork I have done.

The Enclave army was originally alot different than what it has become; it began in the (unbeknownst to me) last days of 4th edition.

Originally, the Enclave was going to be a pocket army of just 21 models; one marine to represent each of the legions, and the Emperor leading them. Just a fun little army I could easily bring to the table, since my local gamestore really isn't local at all.

That was the plan anyway. We all know what happens to plans.


Due to a typo when I was ordering parts online, I ended up with far more bodies on the line, as it were. Things just kind of spiralled from there.

The Enclave as it stands now, was largely inspired by their namesakes from Fallout 2. I greatly enjoyed their concept - a group of survivors, using technology to offset their chances of survival in an unfamiliar and hostile world.


Now, granted, their videogame counterparts were designed to be badguys, who usually chose genocide whenever possible, but they were survivors.

I guess that's what I'm trying to get across with my Enclave.

They survived a nuclear war.

They survive in a nightmarish wasteland.

They are The Enclave.

I look forward to it, but you should have posted this in the WiP section.
I wish I could use "typo" as an excuse to get more models, haha.

I figure that with all the 'extra' stuff I'm going to do, it'd probably end up in AA anyway.

I have a ton of fluff in my head that needs to come out for this army. Like, for instance, they are time travellers. I mean, technically anyone that uses the warp as means of travel is, but they get sent back in time much farther than the average warp traveller does.

Also, the typo for the extra models set me back a LOT of money, so while it's technically a blessing in disguise, it was also a very bad time for me to be without money.

Instead of being a static army list, one of the ideas of my Enclave army is to have some major flexability. I am actually making a 'card game' based idea. Instead of having one master list, each unit has two cards, one for the squad leader, then one for the squad. Special and/or heavy weapons get their own card, extra troops get theirs. Transports get theirs, and so on. This idea came about as the last tournament I was in was very poorly planned, they kept changing the points ammount, so I actually had to rework the army list four times before the day, and then once more when I got there. Very frustrating.

Each of those cards will eventually get made and put on here, but I actually am drawing each picture by hand, so it takes awhile to get that ball rolling. Here's an example of one I've already made: 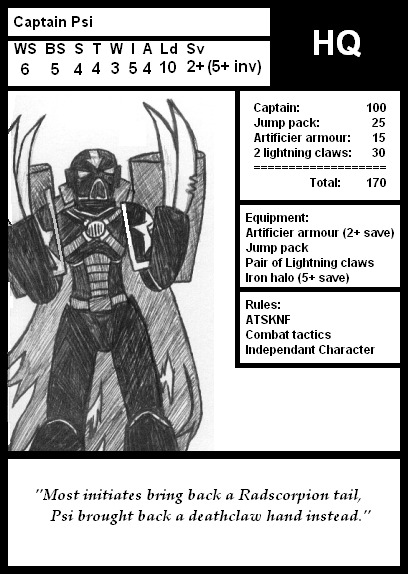 (yeah, i realized i typoed. it's actually a 4+ inv save. will fix it sometime soon)

These aren't all painted, in fact, I had to strip most of them because they were painted in a hurry for a tournament and looked fairly terrible. The vehicles have extra stowage made of found items and converted things.

There are a lot of models to get out, and frankly, it was hard to fix sixty six in one picture, let alone the full army. Let's begin with just the troops section, shall we? 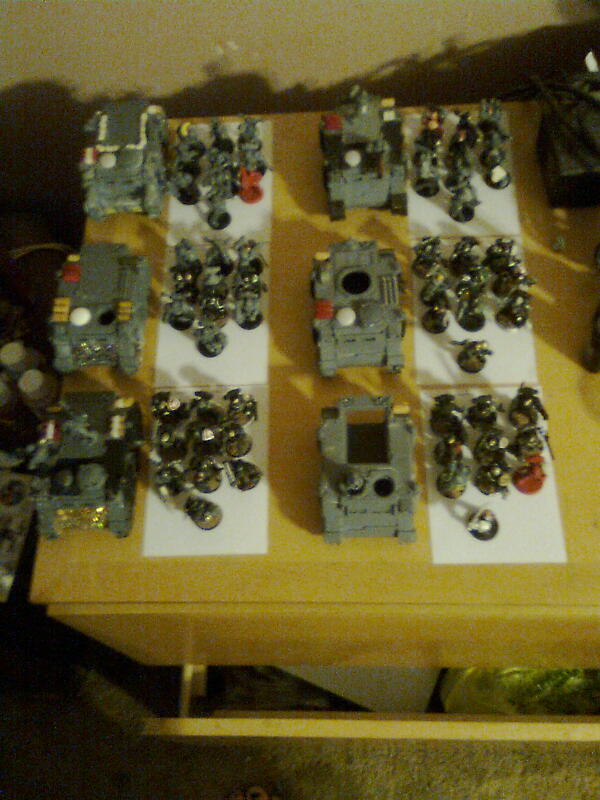 Each of my tactical squads have a razorback, missile launcher and flamer. I have models to allow for flexability, but this is pretty much my standard choice. Each of the six tactical squads was built around an idea, either from 4th editions trait system, or just because I thought it'd work good for modelling purposes.

(these are very WIP, shield your eyes and pray to the Emperor or Omnissiah, or both.) 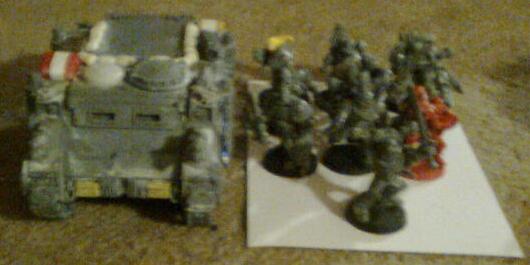 Tactical squad one - 'Take the fight to them' - almost the entire squad is running, has melee weapons, the razorback has a twin linked heavy flamer. I might not use it as such in games, but it looks pretty imposing. 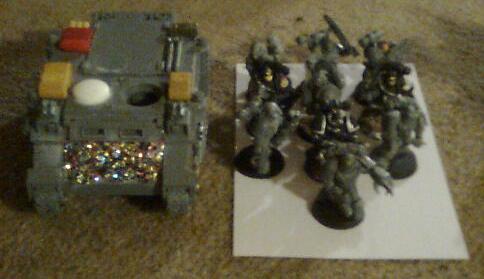 Tactical squad two - 'See but don't be seen' - most of the squad have cloaks, the razorback has more camoflague (made from glitter) and has four smoke launchers instead of the usual single. 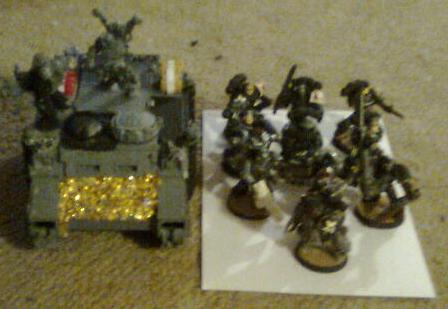 Tactical squad three - 'Suffer not the works of heretics' - Even for a space marine squad, I tried to make these guys (and girl) look as menacing as I could. These are the ones I'm working on first, and you'll likely see more of soon. 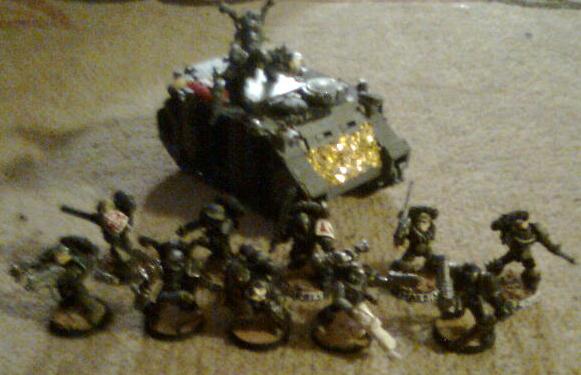 So yeah, I'll eventually post more, but the goal is to upload every week. I'm thinking Warhammer Wendsdays. Sound good?

And for a little extra, here's my Halloween picture for this year: 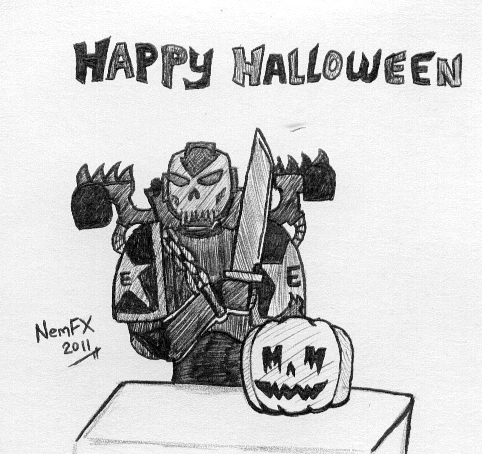 Bluh. Sorry for the doublepost, but I'm not exactly happy with how blurry those pictures came out. They looked okay on one computer, but on the other they look like crappy action shots. I'm throwing together a makeshift lightbox, and I'll try again. Hopefully they'll come out better.

Edit: Okay, how's this? The sgt of the 3rd tactical squad: 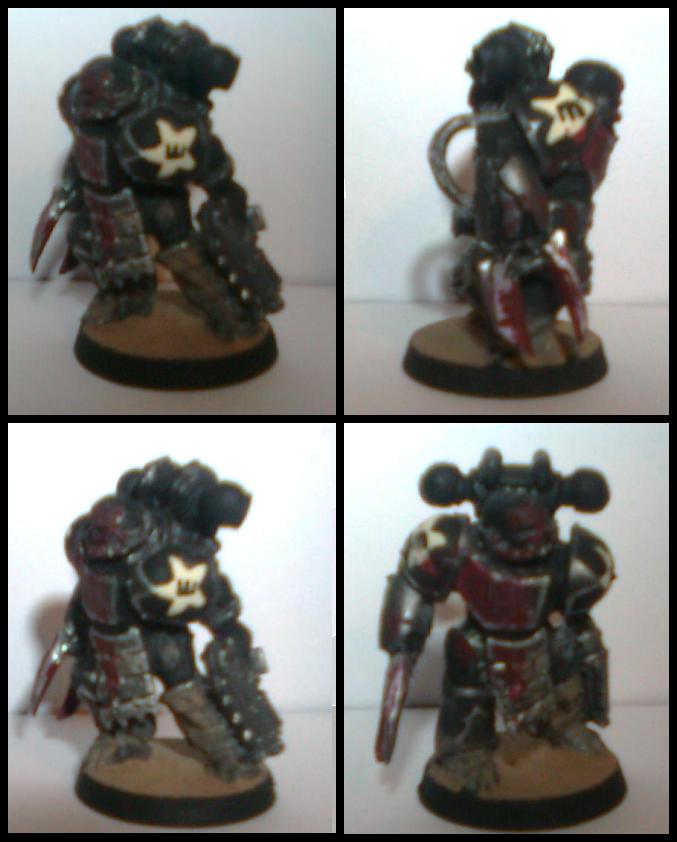 I think that's when you post army lists. I did it once, and I think its because it takes up too much space in the page.

That card is pretty awesome.

Your pictures are pretty blurry though. Perhaps you should put more light on the models when you photograph them.

I think that's when you post army lists. I did it once, and I think its because it takes up too much space in the page.

Its not a space issue, its a GW copyright infringement issue.

We don't want the B&C to be in trouble with GW Legal.

The cards are a neat idea, but as said, the detailed points costs is against forum rules. Displaying the total cost is fine, just not an itemized list of wargear costs.

+++ Southern California representative for the Feast of Blades national tournament. +++ Silent Requiem's Water Warrior +++
Olgerth Istaarn
SM chainswords are powered by a mixture of promethium, punching, bacon and tears of a thousand Eldar women, who were then liquefied into a paste and mixed into the fuel too, for good measure.

Well, if it helps, there are at least three typos on that one card, so chances are the points are wrong too

Yeah, I noticed that about the pictures too.. Maybe my Enclave are so stealthy that they can't be photographed easily.. Or maybe I just wasn't holding the camera still enough. I dunno. The pictures will get better with time, I'm sure.

I think I'm gonna try to get tactical squad #3 done to a minimum standard today. Though the squad has 10, I think I can probably nail out 5 in one night. The sgt is already done, so that takes some effort out of it. Maybe even work on the razorback a little? Any treadheads?

Due to having a new job, and accidently locking myself out of my house for a good chunk of wendsday, Warhammer Wendsday is postponed until later tonight, barring incident.

Isn't it crazy how fast the rumour mill is these days? By the second day of me working there, I already have rumours flying about me. It used to take at least a week or two

I have pictures to upload, and the razorback is nearly done. I've also been goofing off and making the 6th tactical squad's (Headhunters) razorback look really spiffy. I managed to squick my younger sister when I described it. I take that as a success. Maybe I'll even have some fluff to upload later on, so check back tonight!

Apparently this thread is now in WiP instead of AA. I thought it was more AA material, but whatever.


More of the third Enclave tactical squad 'Suffer not the works of heretics'
4/10 tactical marines done. 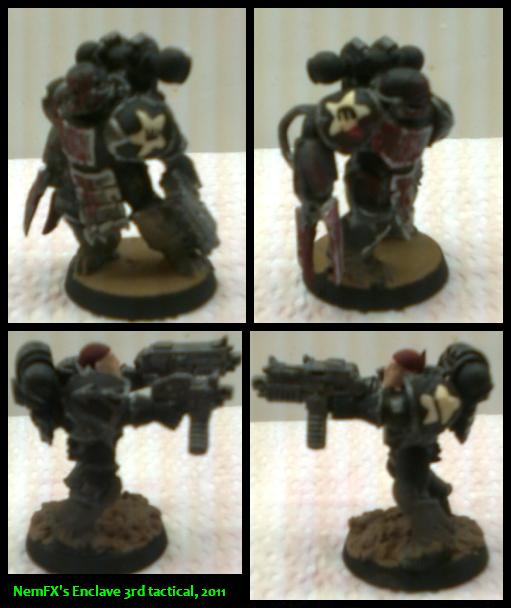