waaay back in the day, before the current codex, I had finally gathered the guts to put the tragic fate of the thousand sons into models. I'd go and make a thousand sons army. Well, after one unit and a chosen unit full of sorcerors, we got the current codex, which removed a lot of the options. After failing to paint a defiler (the gold gave me too much of a headache, not to mention how to make two close combat weapons. Though I might now have a shot at it, I don't think I want one anymore), I left the project to rest for a long, long time.

Then I came to bolter and chainsword. And I read about TDA sorcerors as obliterators... long story short, while I'm still not decided on an eventual army list, I did decide to put a brush on the models again, and have another go. New paint scheme, little less hassle with a lot more looks, I think, and hope I actually get somewhere.

So, for completeness sake, here's some of my old models. It looks like one rubric snuck off and didn't get put on the picture, but he's forgiven. Also, one of my old chosen who will be posing for a while as a sorceror for the 2nd squad until I figure out how to convert the second sorceror model so they don't all look alike.
For all the bad painting here, I still like the sorceror's force sword:

I'll likely repaint all of these guys one day, but probably not before the rest of the army is done.

now on to the new stuff. Painted in half the time, if not less, and I'm quite happy with them.

And then onto the next project. I'm not sure if I consider these guys done yet in the modelling department. It feels like they're still missing something, but I'm not sure what (apart from the obvious lack of paint, of course).

Enjoy, or not, as pleases you,
but please do send me some comments, questions, complaints, constructive critisism, help with spelling critisism, or praise.

Stunning work Vonny. The second unit of Thousand Sons look great (heck the first unit is good too, just different) and the obliterators/terminator sorcerers are nicely posed and the extra details you've added are well done.

I'm guessing you'll go back at some point and rebase the first unit to tie the army together?

Good stuff! Looking forward to seeing more, particularly of those terminators.
What other units do you plan on including?

I am in love with the eye in that sorcerer's chestplate.

If you're sad like me about losing Chosen, get some dark angels cloaks and find a friend with spare Grey Knight hands (the ones that are open), then bitz order some of those terminator sorcerer helmets. Chosen "sorcerers" with Plasma Guns. Very fluffy unit.. that way you can still have your high 'sorcerer' number.

The plus side to this is that when we get a new book, you can use these guys as almost anything since they'd just be "casting spells" with their left hands.

@Yale: yes, I'll rebase and re-paint the whole first unit, but not after painting the rest of the army. Until then it's just taking time out of my progress towards a playable army, I think.

Not that that'd be going quick, as I'm prone to running 3 or 4 projects side by side...

@kierdale: Another squad of thousand sons, then mount them all in rhinos, then either ahriman or a sorceror lord (I don't understand the fluff behind having a daemon prince leading them). After that? A predator? Demolisher? I don't know. I need to get to a 1700 point list, and possibly a 1500 one too. But I've never been great at list building...

@Ah-a-nothepsis: That eye is some really old greenstuff work, and to be honest, not near what I can do with the stuff these days. As for a high sorceror count - that's not necessarily what I want, but it was a way of adding diversity (and at that time, some punch) to the list without breaking the fluff.

But i think tabards're not very good, GWs're better, to my mind.
May be gold should be brighter?
Termies're not good

And... robes, in the name of Tzeentch! They look like doctors, really

Take the Magic: The Gathering 'What Color Are You?' Quiz.

The left one is my favorite.

Once they're painted, I bet they'll be stunning.

I love seeing progression in miniature painting and these examples are superb. Well done.

I really, really love how you did the metallics for the trim of your new models. Contrary to what people seem to like to parrot, I've found that metallics are both the most difficult thing for me to paint well, and one of the rarest things I see pulled off well on other people's models, but you pulled them off superbly.

"I remember the day. The day the sky burned as the Dead Emperor's pet butchers descended on Old Badab to tear down all that we had built in His own name. It was in the final hours of that day that I scourged the wings from my breastplate forever. I remember the day. I remember, and so will they."

Angry Chaos Player™ since the dawn of Gav

The sorcerors are done! (counts as obliterators)

or, not really, because the one dude has some fur on the top of his cloak. It's cleverly hidden from view here, but as I hadn't decided yet on how to paint it, I haven't painted it yet. I never saw any art or reference that I can remember with a thousand son wearing fur. So I don't know how to paint it.

Of course, once I've taken care of that, the question remains what next to paint... anyone feel like discussing army lists?

As for army list. Hmmm, how about vindicators with a ghostly theme. Could have chains wrapped around it with wards and sigals painted on to keep the tortured souls within the vehicles hull.

I never saw any art or reference that I can remember with a thousand son wearing fur. So I don't know how to paint it.

Why Wolf fur of course (I think you get my meaning

Great work on everything, but I absolutely love the Sorcerers! You've just given me some inspiration for how I'd like to convert mine. I've been wrangling over that for months.

Happy are the people who do not know how laws and sausages are made.

Being a big fan of the Thousand Sons, I love everything I'm seeing here.

Very nice! I love the idea of Sorcerers as Obliterators. Frater Uriah, it is also good to see that you are still alive and well on the site.

Wow...I am just humbled at how awesome the rubrics and terminators look...so impressed! Sod having a cookie here, have a bag!

My blog - Shaken Not Stunned

JOIN THE ETERNAL WAR. SAY YOU FOLLOWED MY LINK IN YOUR INTRODUCTION TO HELP TZEENTCHS CAUSE.

so, for my librarium painting challenge, I entered (among other things) Ahriman and the aspiring sorceror for my second squad. The one who had none yet, so to speak.

And today I finished them! 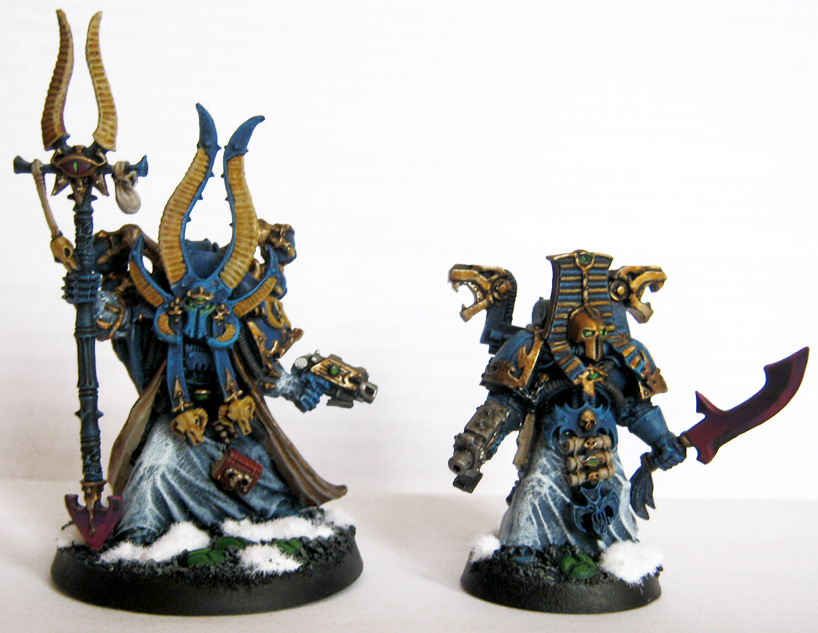 I also did some work on the back of ahriman's cloak, where the edges have some gold-colored runing on it (the rest of the cloak being the dark blue of the normal armour), which looks kinda neat, but of course, it isn't visible in this picture. Maybe I'll take one of those later, if people are curious. It's not all that special.

So, what do you think? Did I do our big guy any justice?

Nice, just wish I could paint as nice as you, like the swaps on the aspiring sorcerer, where did you cut the old arms off?

I cut the old arms off just below the elbow - so one I just didn't attach, and I cut the sword arm off. Then I cut off a simple chaos space marine bolt pistol and CCW arm from the sprue that came with the thousand sons, and put a blade of a grave guard model onto the hand instead of a chainsword. Voila, finished

I'm looking for WHFB High Elf Archer legs to buy/trade. PM me for details.
QUOTE
His list doesn't show Jesus for sale tho. If Jesus Christ is avaliable for 75USD, I may get two.

I build a predator-from plasticard

QUOTE
The Codex Astartes- Like the Bible, written by Sun Tzu

I'm looking for WHFB High Elf Archer legs to buy/trade. PM me for details.
QUOTE
His list doesn't show Jesus for sale tho. If Jesus Christ is avaliable for 75USD, I may get two.

I build a predator-from plasticard

QUOTE
The Codex Astartes- Like the Bible, written by Sun Tzu

I'm already thinking of buying a dozen off ebay now, to think I used to think having too many of that guy was a bad thing... I have a bad enough problem of just converting various characters as it is

I didn't mind them so much when I could put Powerfists on them anyways ^.~