My Salamanders LPC thread - The wrath of Vulkan

42 replies to this topic

Ok, so my pledge was 1x Captain and 1x 5 man combat squad in 3 months - sounds simple? I paint at the speen of continental drift and have rediscovered my Xbox 360, so that is getting a lot of my attention (and destroying my eyesight)

Thankfully this LPC will push me into painting something again, and, as all previous models I've painted have been dismantled and submerged in Dettol, I have a lot of bits lying around to play with

I've chosen the Raven Guard as sneaky special ops type marines appeal to me (and the Forge World stuff is awesome) so without further ado, here is my Captain...

Now, the head and the backpack are only blu-tac'd on for the moment, what do you guys reckon? That look ok? Or would the Korvydae jump pack look better?

I'll stick with the helmeted head instead of the bare one as I'm awful at faces and the Korvydae head is ridiculously detailed...u

Looks really great. Personally, I would go with the jump pack. His pose looks like he's about to launch himself into the air...

Hello, good luck with keeping focus on your project! I certainly lack it these days...

I love this model with the helmet. One suggestion would be to change the facing of the helmet. Since the model is charging forward, I think he should be facing the direction in which he is moving. Of course, it is completely up to you if you have something different in mind. Regarding the jump pack, it is a cool looking bit, but it could also look good on another mini if you wanted to spread the wealth on more limited Raven Guard bits to another more "generic" marine. The back pack you currently have mounted looks great to me.

I agree with HellHunter, unless you fancy repositioning the legs or the arms. Atm he's in a slightly odd pose.

Put something under his raised foot and it should look better. So far look good.

I've repositioned the head and kept the normal pack, I've built up the base so his foot is more supported, it looks like he is charging forward rather than jumping in the air - I'll put an updated pic on later

Starting work on the Veteran Sergeant of the combat squad tonight

Good luck with the Challenge!

QUOTE
We can basically infer that Corax spent the rest of the Heresy roaming from world to world, brutally obliterating as many traitors as was inhumanly possible, with a thirst for vengeance that even Dr. Phil would need several commercial breaks to deal with. That's gonna take some serious gear, a lot of pent up anger, and an oil change at the very least.

And Mr Indecision here has changed his mind - after 2 aborted attempts to get some Raven Guard painted, I realised I wasn't feeling anything from these guys, so back to my first (and only true) love, Salamanders!

I've amended my vow to a 5 man combat squad and a dreadnought (Contemptor will be ordered very soon...) Here is my first marine, the Veteran Sergeant 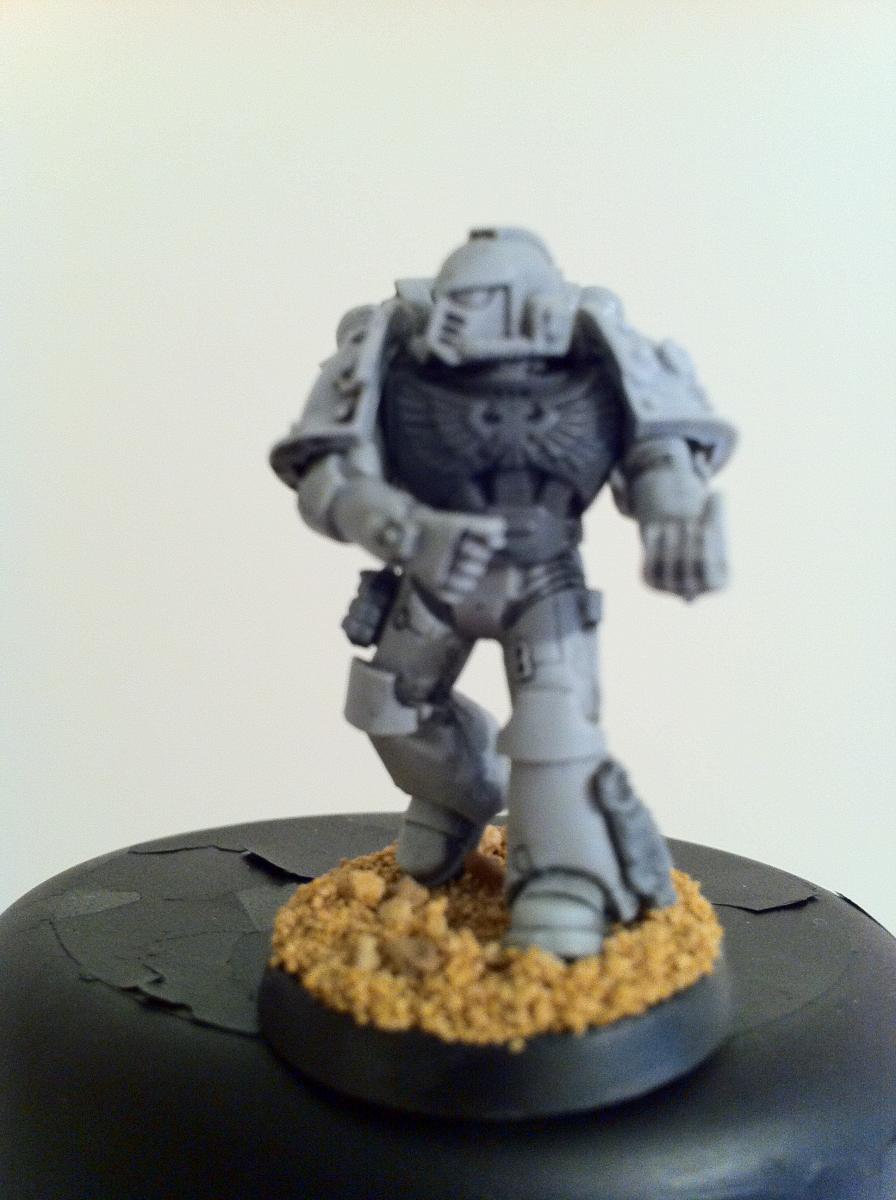 I went for the colours in IA10, where veterans have gold shoulder trim and helmets, and I think it looks quite nice 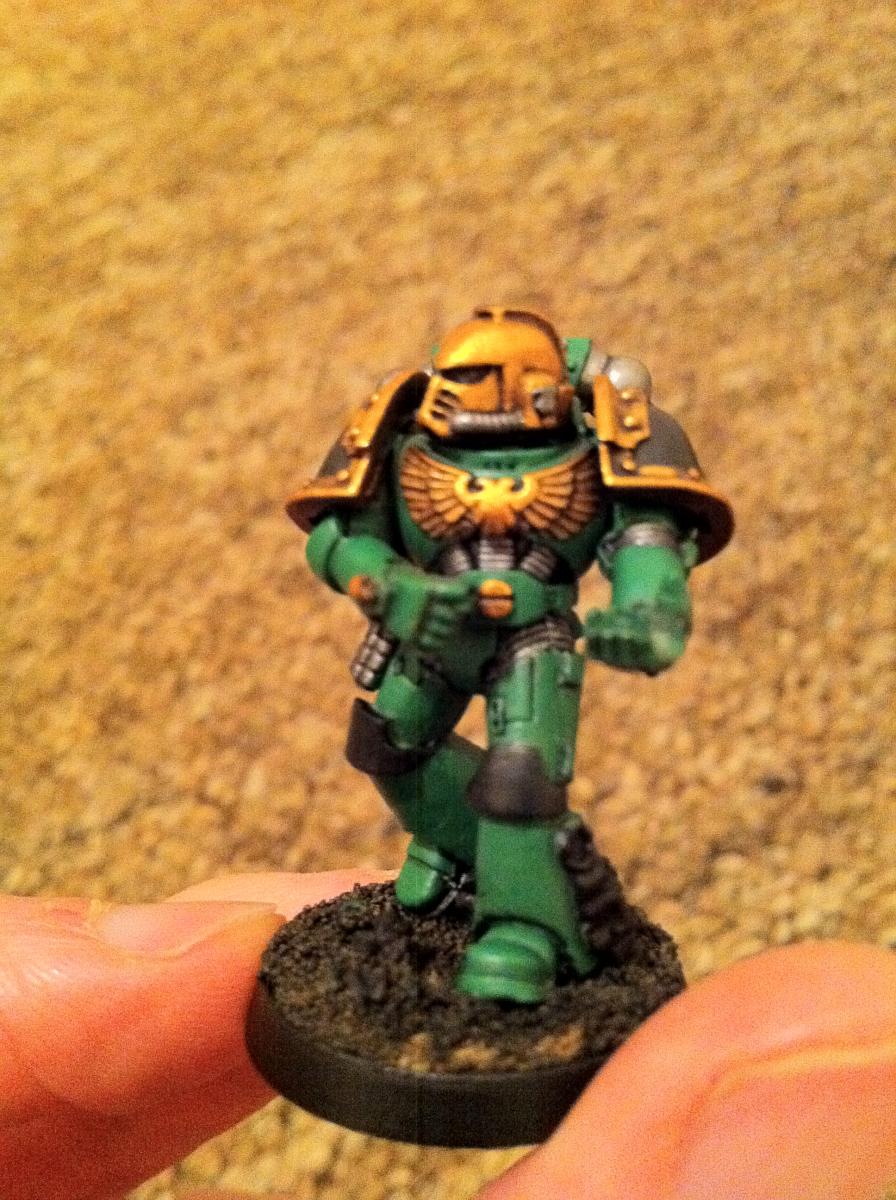 He is about 45-50% done in this photo and I've since done some more, I'll post hopefully the finished model later on!

Comments and critique appreciated as always

That sally is coming along nicely mate.

Really nice sally there mate, how'd you do the green?

That is really nice, and it makes it so tempting to do Salamnaders.. wish it wasn't so expensive and need to do my thousand sons

How did you do the green and gold? am using a dirty gold on the bits like the heavy flamer, gun barrels ect and most of the details, but would now like to try that gold on a few details and the green on some tabards/robes for terminators if that was okay.

Thanks for the kind comments guys!

Surprisingly easy to do!!

This guy is looking great. Love the shade of green too! Looking forward to seeing your progress!

Anyway, on to the pictures... 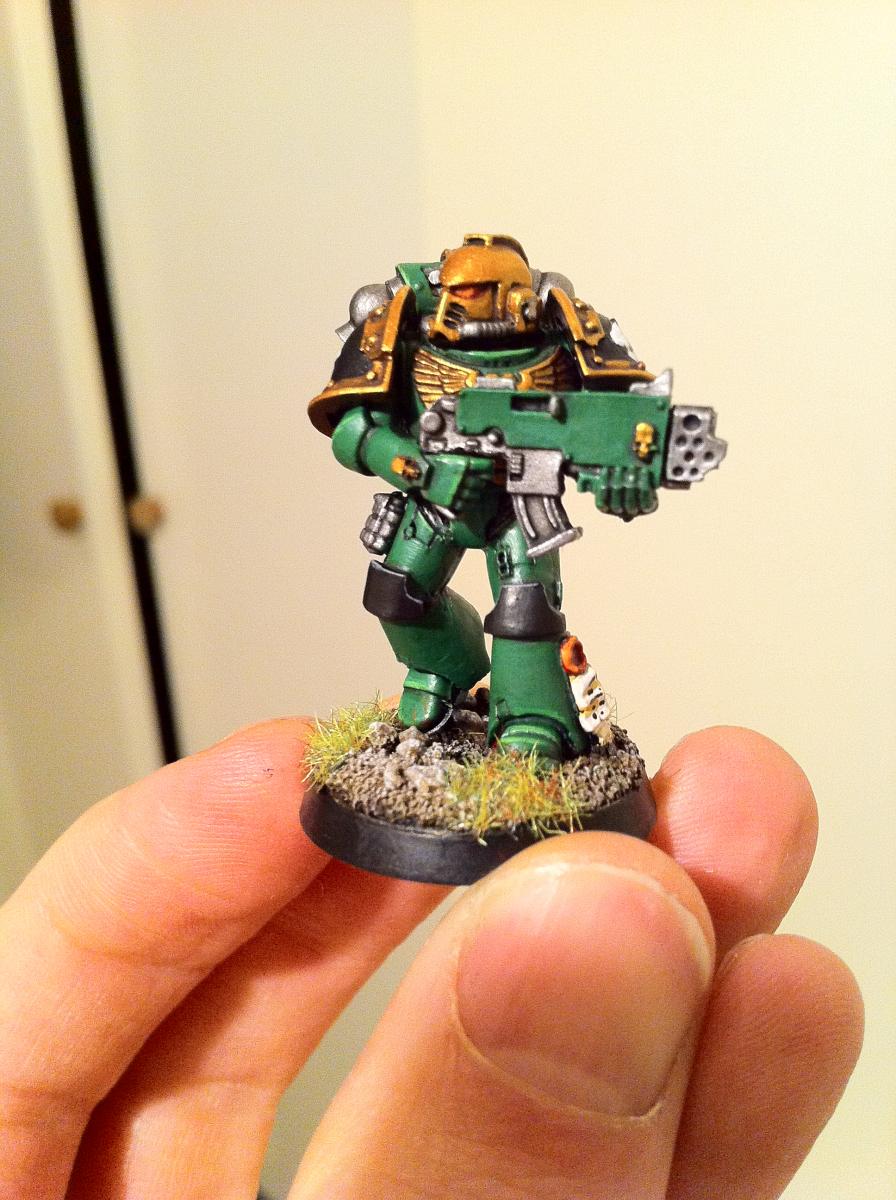 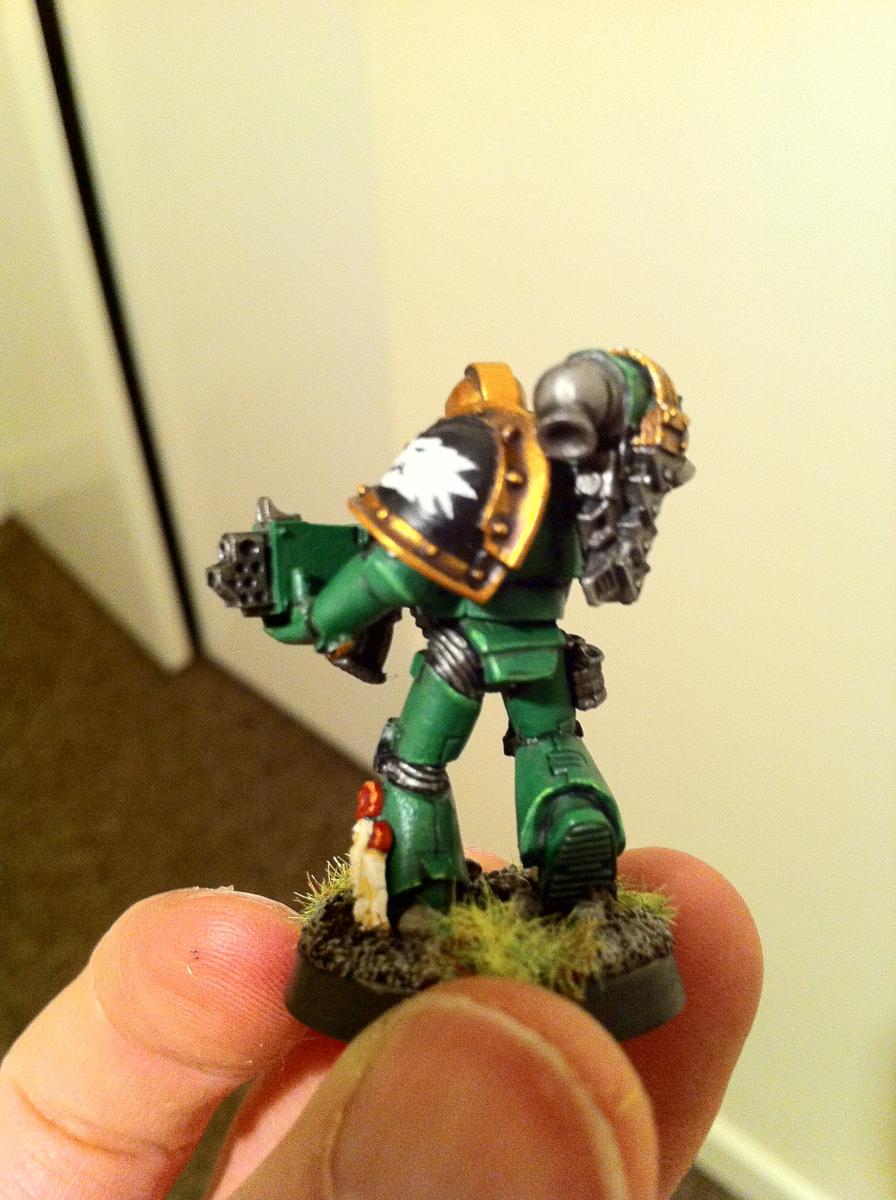 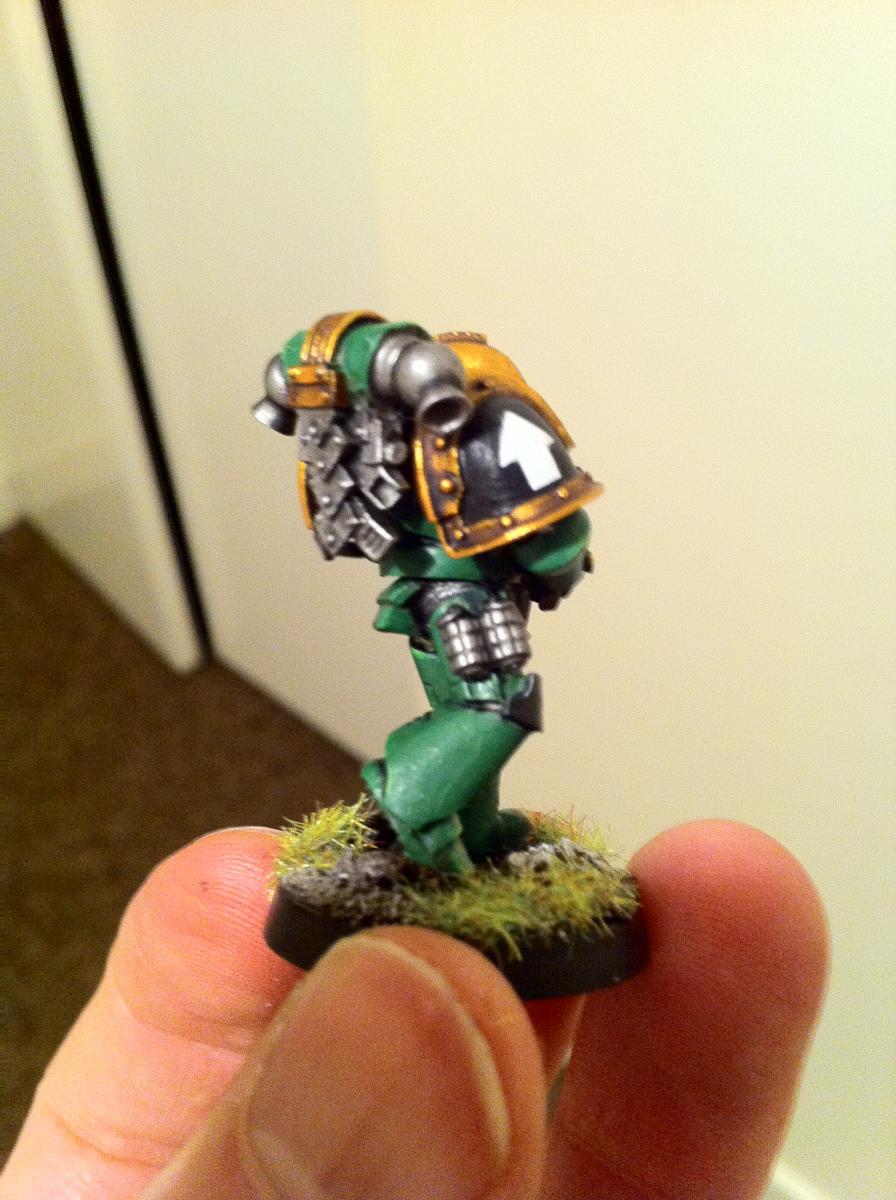 As stated earlier, I'm using Imperial Armour 10 for inspiration, and I will paint flames on him to symbolise the Promethean cult when I've had some practice on a test model (combi flamer and knee pads)

I've stayed away from extreme highlights for 2 reasons, firstly I wanted him to appear darker and secondly my hands arent as steady as they used to be. I think the most annoying part of this model was the transfers - it took longer to get them on, painted and sealed then it did to paint the 2 layers of green - I put it down to my choice of flamboyant sholder pads - the standard plastics are much easier to work with as the surface is a tad larger!

++The photo doesn't really do the green justice, it looks flat - please believe me it isn't in real life!!++

Cheers Kev, thats what I wanted for my Salamanders, that slow methodical advance across the battlefield look - weirdly enough, they're actually the set of "running" legs from the Forge World MK IV set - I've avoided using them for so long as I hate running marines - however, I saw SCC use some as "walking" legs on his Raven Guard just by tilting them slightly and I thought it looked fantastic (and couldn't believe I'd never thought if it before...)

'Brothers! These foul Aliens stand before us, thinking they are powerful enough to resist us! But they have made one, massive, terrible mistake; they have forgotten who they face!'
'FOR WE ARE THE MARINES MALEVOLENT, CHOSEN OF THE EMPEROR, THE ONLY TRUE SERVANTS OF HIS GLORIOUS WILL!! FORGED WITH HATE, ARMORED WITH TRUTH, TEMPERED WITH BLOOD!!! THESE XENOS SHALL FALL!!!! FOR GLORY! FOR HATE!! FOR THE GREAT CRUSADE!!!!!!!!!!!!!!

Great work, i love the gold/bronze! Good luck with your vow,

Here is combat squad member number 2 - I built him using a Mk 3 torso, I think it looks good but I'll use them sparingly in future. 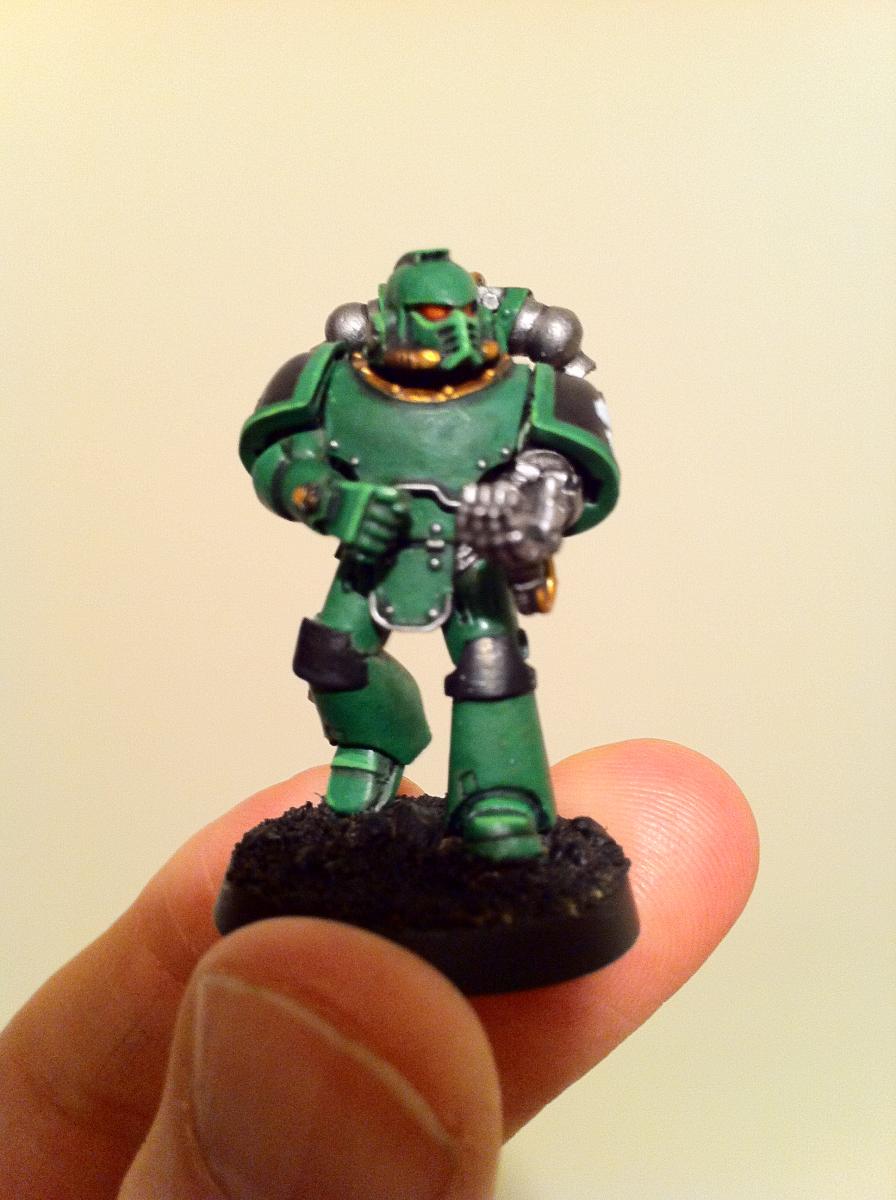 I gave him a flamer, I toyed with the idea of a Meltagun, but decided when I get around to making this a full 10 man squad, I'll include the signature Multi Melta 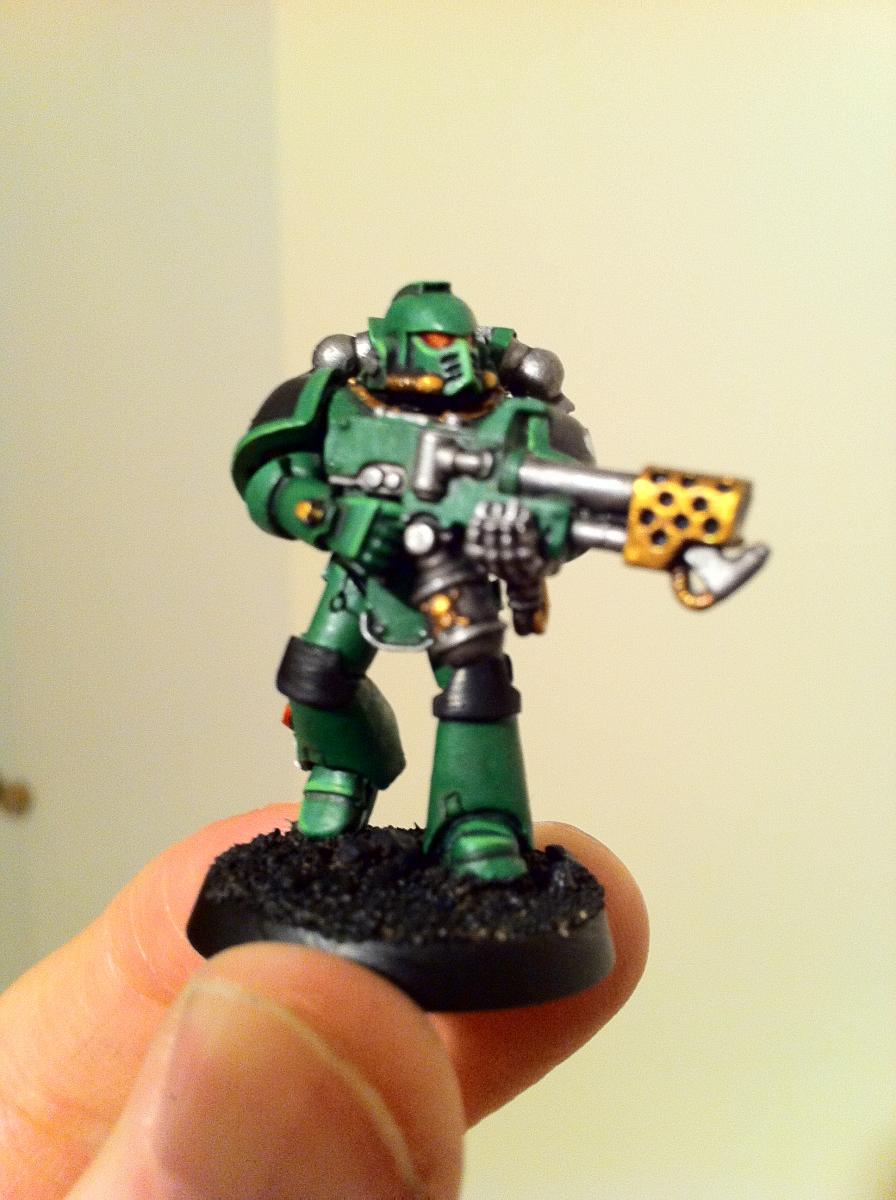 As stated in an earlier post, I'll paint additional flame detailing on and weather with Forge World powders after I've had some practice on some old test models first

2 down, 3 to go and the squad is complete... Then, I get to build/paint my beautiful new Contemptor who arrived yesterday (complete with Multi Melta and Power Fist)

These are coming along well. Great painting, and like the kit bashing.

THe IA 10 inspiration is a very good idea !

Hope to see some other marines with flames soon !

Almost completed my vow, just 1 more marine and a contemptor to go!

++The pictures are a bit dark, it ain't to sunny in Newcastle!++ 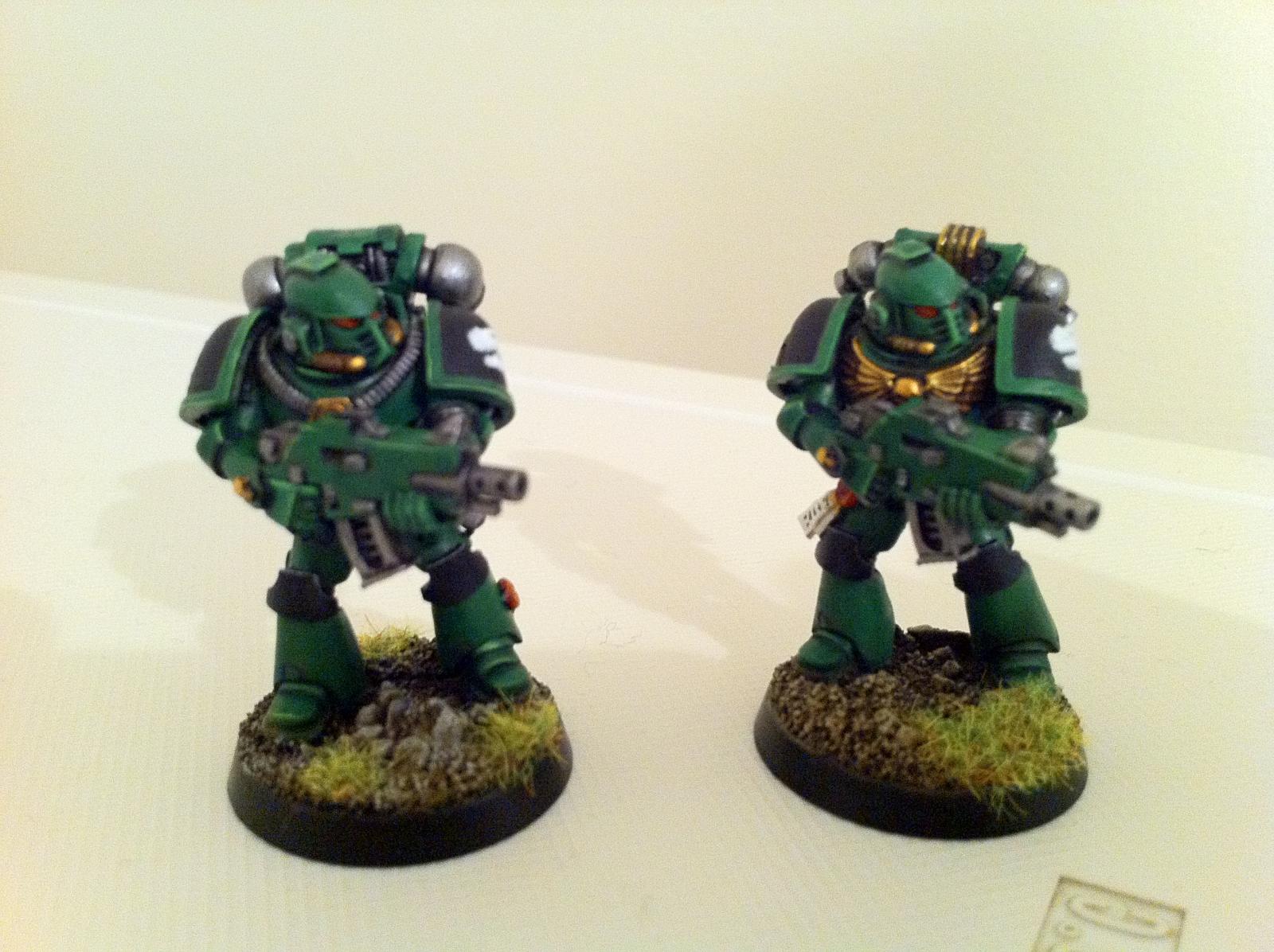 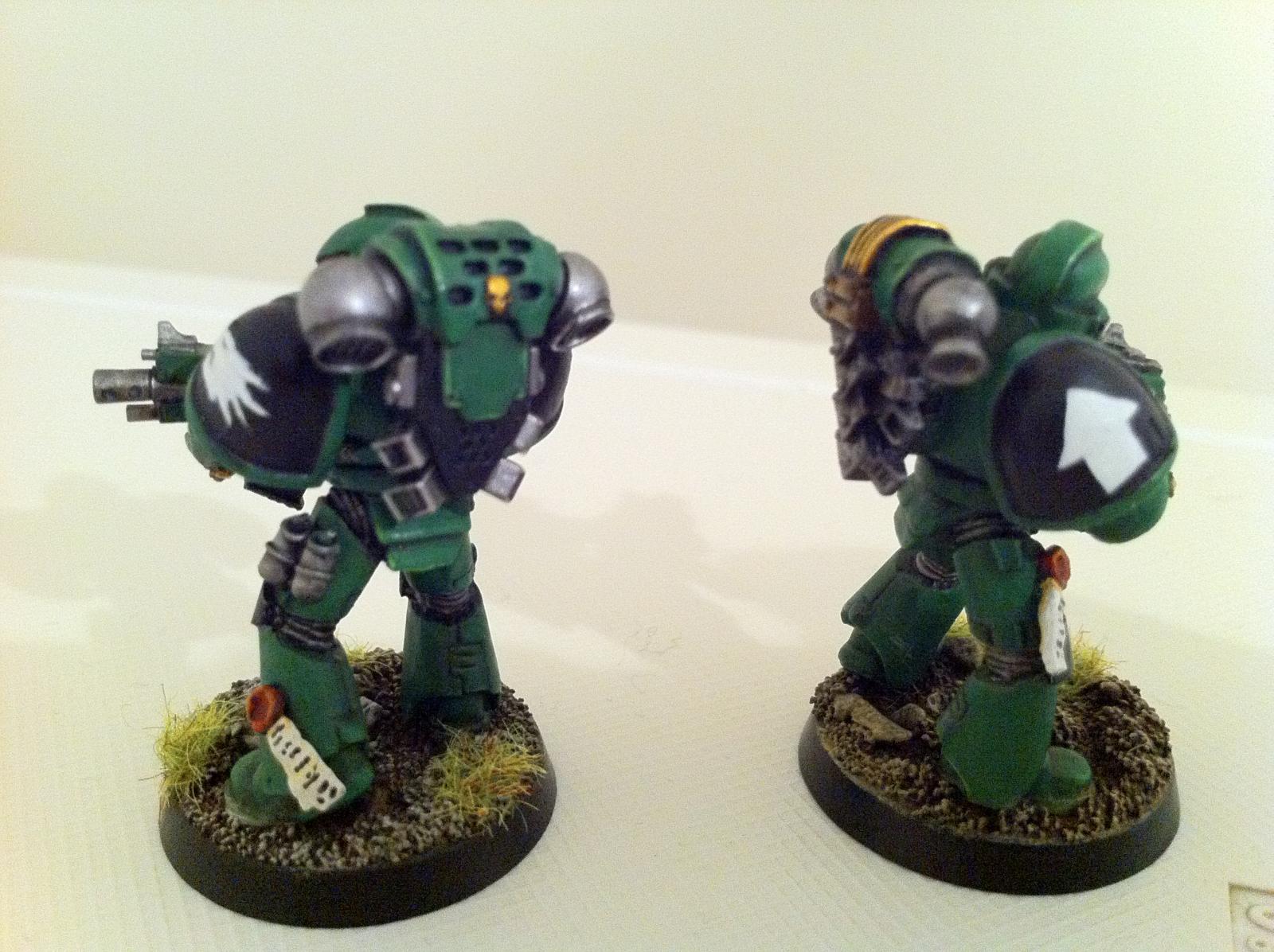 It was only after I finished the second of the 2 bolter marines that I realised how similar the poses were, I changed that for the 3rd guy... 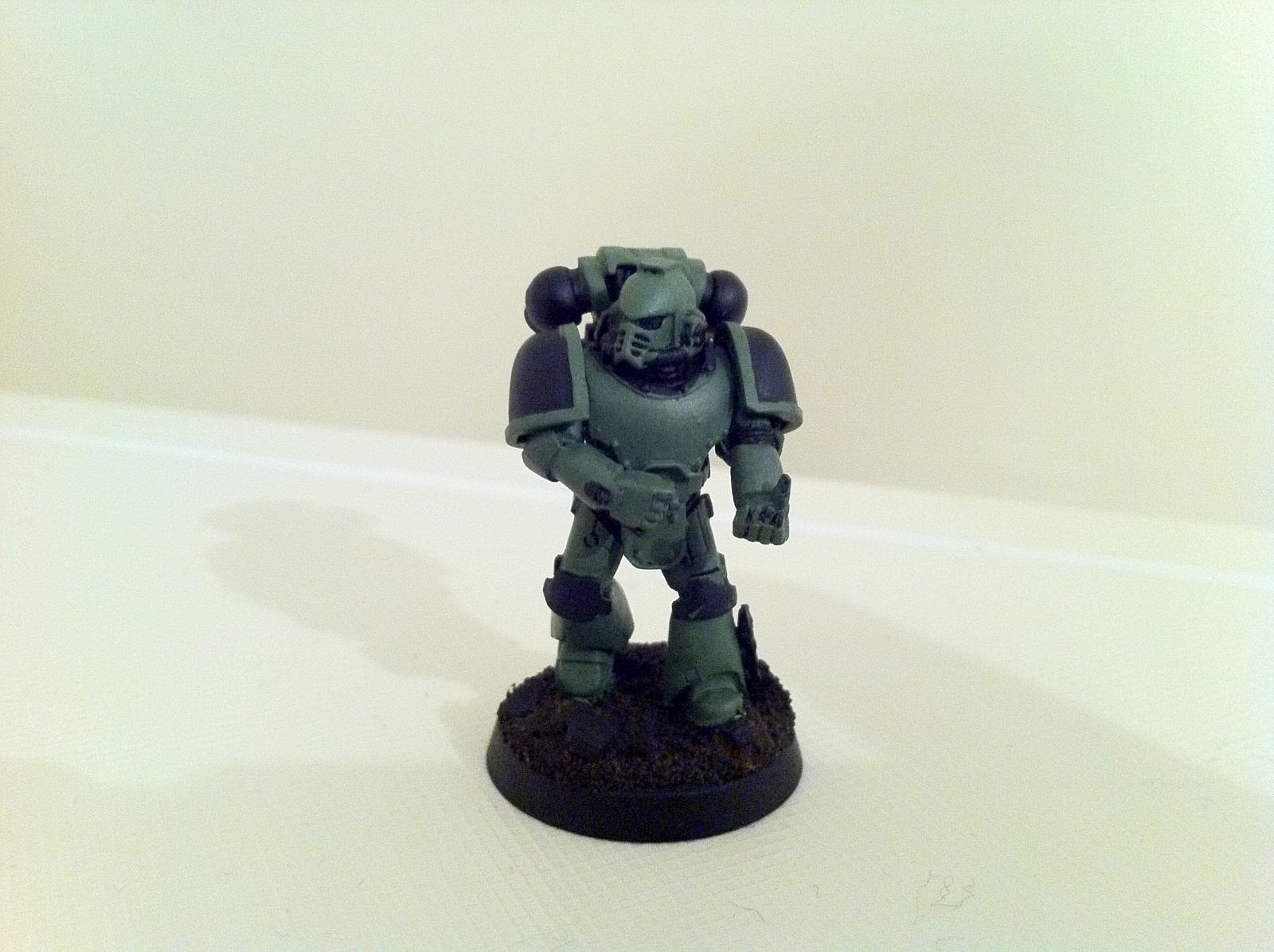 He's only at the base coat stage at the moment, should be finished this week... Should be.. 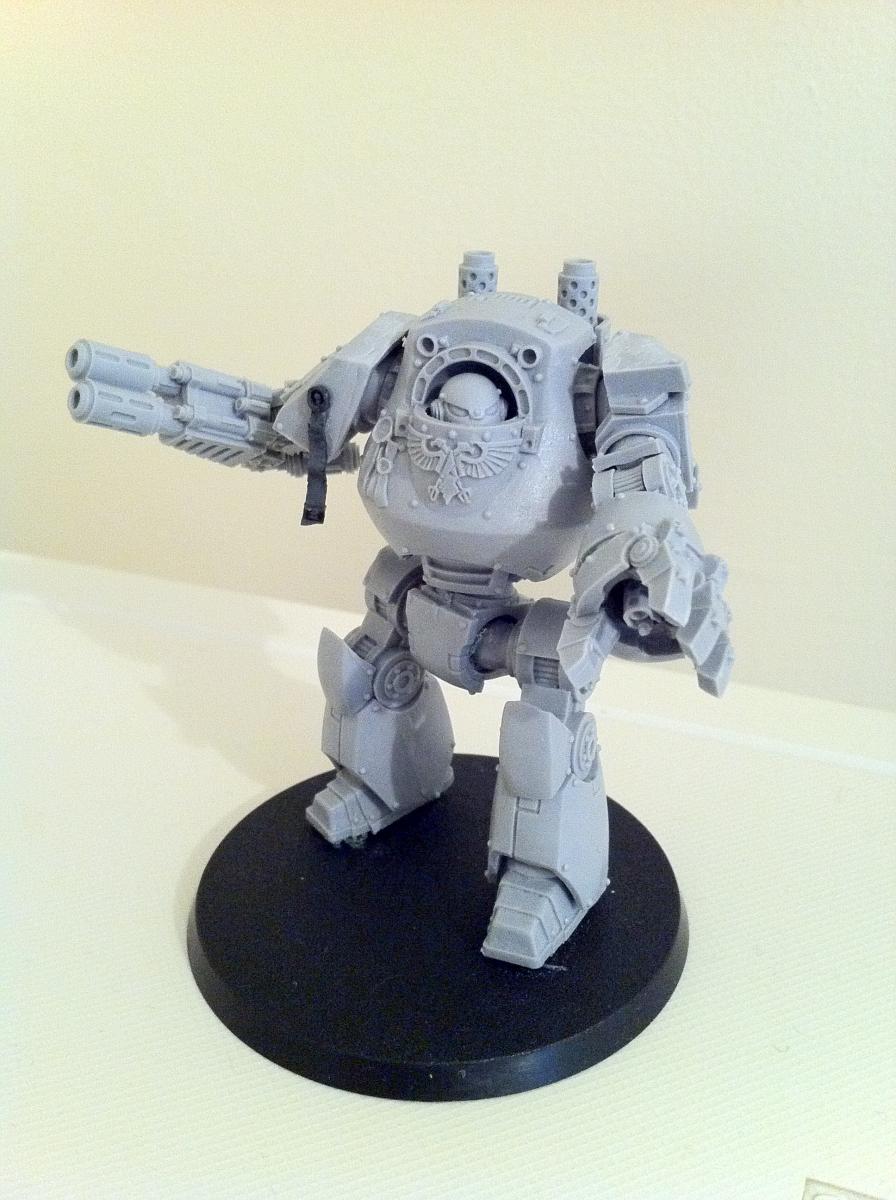 I'll have fun painting this guy I think, more fun than I had getting his legs to stay in the hip joints anyway

Comments and critique welcome as always!

Cool looking pose for the contemptor. Though where did you get that long purity seal from?

Looking forward to seeing this painted up!