I, Maligoare, Watch Commander of the most honoured Deathwatch do hereby pledge upon the honour of the chapter and at the request of Inquisitor Vaseiron to recruit and train a five man Kill Team and a Librarian to command them, to counter the ever increasing threat of vile Xenos incursions in the Ultima Segmentum. I will provide the Inquisitor with no less than two updates on my progress, and will ensure they are fully indoctrinated and deployed by 31st March 2012.
In the name of the most hallowed Emperor, they will be ready. They must be ready...

From left to right we have a Space Wolf (who will be run as either a company champion or a veteran with TH/SS), an Apothecary from the Dark Angels, an Ultramarines standard bearer, and a Black Templar.

A better view of the Apothcary's Narcethium/Reductor setup and the Templar's combi-plasma.


This guy is based on the =I= Battle Brother Artemis. Looking at the shoulder pad on the GW version, he looked like either a Blood Angel or a Dark Angel. As I had some Blood Angel parts in an appropriate pose, I went with that.

looking good brother!
i'm not digging the standard bearer though. i always saw the deathwatch like todays military spec ops forces. and i don't think a huge banner fits their combat style, but that's just my two flayed skulls

'Death haunts the darkness and he knows your names! ' - Night Haunter -

check out my Night Lords WIP! now with fluff

Really like the Artemis conversion! He's actually part of the Mortifactors chapter. (http://wh40k.lexican...ki/Mortifactors) I have to agree about the standard bearer though, he really doesn't fit with the Deathwatch fluff.

Hey dude, loving these mini's! I'm doing a DW squad aswell so your work here is quite inspirational

Erm, the banner is not really to my liking, but hell, it doesn't matter what we think, its your squad

I'd love to see more work from you sir

P.S. were did you get all the shoulder pads from?

Ok, time for update number one.

First up, these three have received a little work. Still a fair way to go, but I've been playing with Tamiya Smoke instead of the usual wash of Badab Black. I've also tried something different for the chest eagle, and I'm pleased by the way it turned out! I know the banner doesn't really work for Deathwatch, but I had one spare and fancied a good excuse to try a little freehand - it also gives me a model in case I want to use the banner in-game.

Next, here's a peek at a side project (I know, another one) I've been working on. See if you can work out my plans...

Yorkshire Dave - The shoulder pads are from various sources. Grey Knights, Blood Angel Death Company, Dark Angels and Black Templars form the main part, but I also have Deathwatch pads from GW mail order, and several from the command squad.

I've started work on the Apothecary - the robe is done apart from a little clean-up around the chapter symbol on the chest. I've also started in on the Space Wolf, but he's at the block-colour stage. More interesting is perhaps a rear view of the Apothecary's 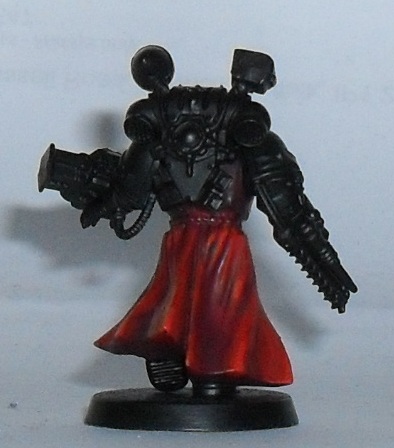 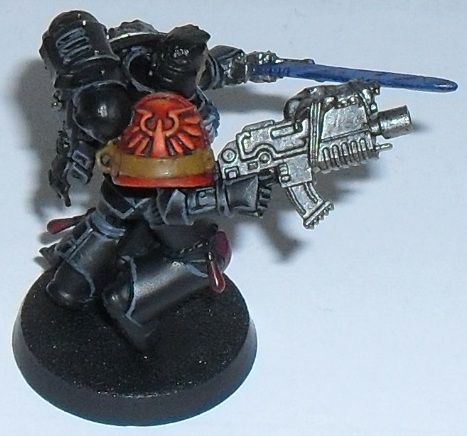 This will be the last update before completion. Everything is up to at least 75%, with the Space Wolf being closest to finished, and the librarian being furthest. Oh, and don't tell the Black Templar that he's a psyker... 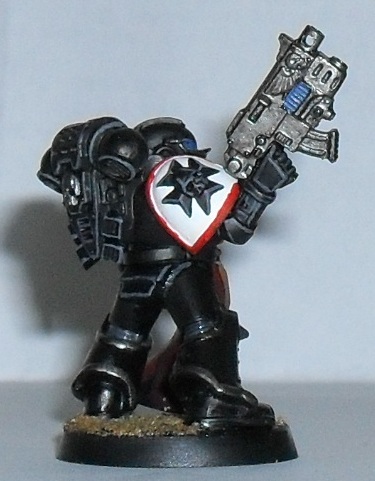 I'm going for an understated look on the banner, as so many people have been against the Deathwatch having a flag. Perhaps I should have made it a holy icon on a stick, but I like the banner bearer. The eagle eyed may notice that he's changed from being an Ultramarine to a Crimson Fist. I'd love to pretend there's a good reason for that, but I simply can't paint that Ultramarines icon without it going lopsided. 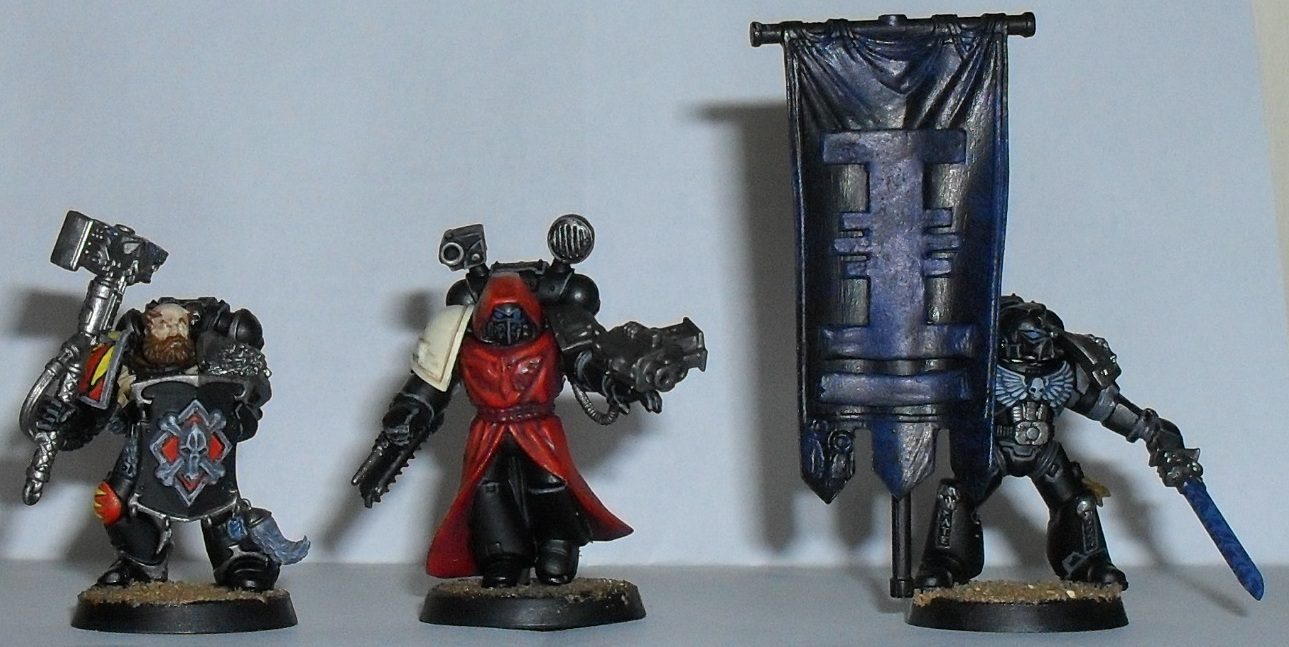 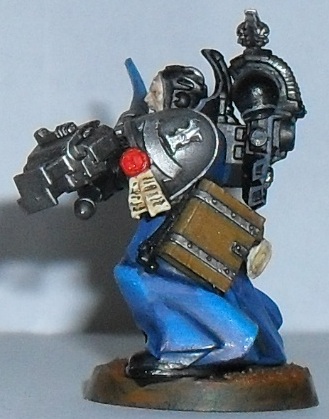 I've tried to paint the banner to look like the fabric itself is stitched in NMM - yes, it's a bit crude, but it looks much better in person.

Congrats on your finished vow. I really like the black armour you have got there, and those chest eagles pop nicely. Not too sure about the banner itself, but you have to start somewhere for new techniques, and your braver than I to have attempted that!