I, vharing of the Blood Angel subforum, vow on the honour of my Chapter to paint and present at least 5 assault terminators, 5 honour guard members, 1 contemptor dreadnought and 1 furioso dreadnought on or before the 31st of March, 2012. I promise to provide at least two WIP updates, preferably with pictures, in that time. I vow that if I should fail, I will provide the Librarium with an article and wear the Signature of Shame until my penitence period is done.

I havent been doing much painting lately, due to the pre Christmas video game releases. I have been kind of waiting for the LPC to start so I will have some motivation, so here we go.

First off we have the furioso dreadnought. I have owned this guy since I was 19. He has had 2 repaints so far. The last one was about 6 years ago. I figured one more couldnt hurt, now that I am better at painting. Currently he is in a paint stripper bath. 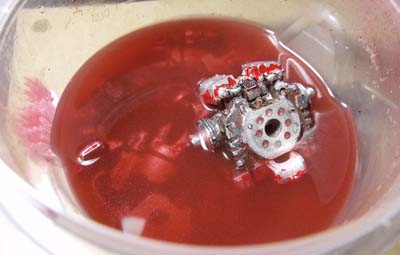 Next up 5 assault termies I have been working on for a while. I am using the LPC to give me the drive to get them done.

My command squad for the Tycho I scratch built a while ago. Same thing as the termies, they have been on my painting next for a while and need to get done. I picked up some white tac and put it to good use posing the squad.

I put in a good bit of work on them tonight as well as some of my other projects. The contemptor is still in the UK, waiting to be ordered. I cant wait.

Lovely work! Where did the legs come from for the assault terminators.

@ AGPO- the legs are Maxmini- Crusader Legs. They fit the terminator torsos quite well. These 5 with lightning claws are to become part of the squad I made awhile ago.

@knightyc- The furioso is one of the old BA metal one with two CCWs. The only thing I ever changed on him was hacking the storm bolter off and giving him a heavy flamer.

I have been really slacking on my vow but did get some of it done this week end. I finished the assault termies and got a big dent on the contemptor. Just have to start on the metal furioso and the other command squad members and finish the contemptor and I am done. The step daughter goes away for spring break this week so no having to help with after school homework. I just have to crack done and paint like a crazy person. 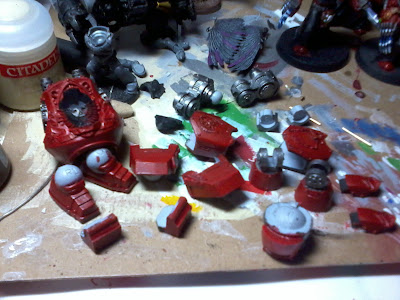 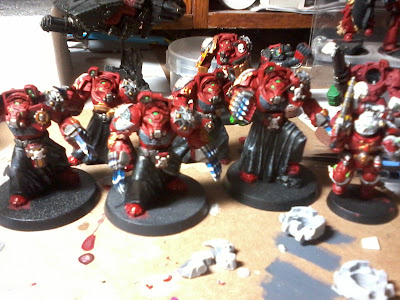 (sorry for the crappy pictures, but I have lost my camera cable and had to use my phone to take the pictures)

I finally got an airbrush on Friday. I watch a whole bunch of videos and read a whole bunch of things about thinning paint and stuff last night and this morning. missed up my two reds that I use for my Blood Angels and got to work. Holy crap, an airbrush really saves time. I managed to get the Mech red and most of the Blood red done on them in less than half the time it would take me to do it by brush. The only thing is I cant afford to get a compressor for my airbrush, and I dont think anywhere in town will have one. So I am forced to use canned air. I spent to much time playing around with the airbrush and wasted about half the can of air so now I have to wait for the shop that sells it to open on Monday to go and get more. Oh well, that should give me time to get my contemptor finished.

And now for pictures. 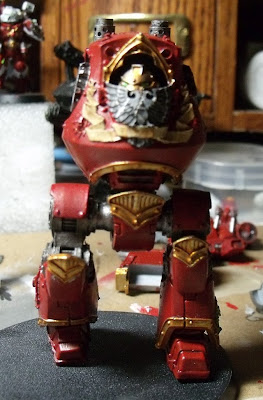 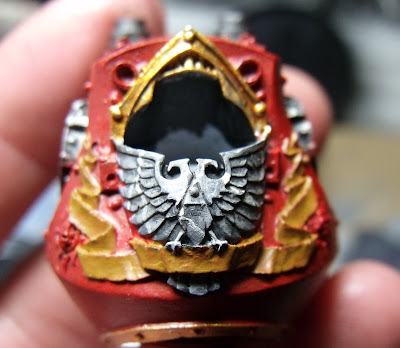 ( I am trying to go for a marble look for the eagle on the contemptor.)

One funny thing about the contemptor is that while I was washing it, I accidentally was two of the claws down the drain without thinking, before I could put the drain basket in. Well the nest day I fired an email off to Forge World asking if I could purchase a new set of just the claws. I was told that they cannot sell just separate sprue bits, but that they would be happy to mark it down as missing from my order and send me a new one. GWs great customer service that I have been hearing about at work. Just as long as they come in before the last week of March so I dont have to use my back up plan to get my contemptor done in time.

That is proper amazing customer service, well beyond what they had to do! 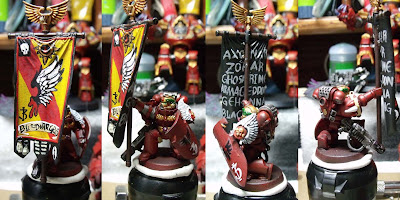 Got my banner bearer and one LC marine done. The banner turned out really well. Just two more honor guard and the Furioso to paint by the 31st. 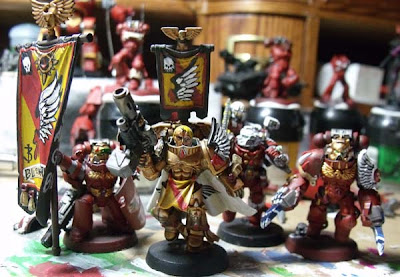 Here is my scratch built Tycho with three members of his honor guard.

I am still waiting for the claws for my furioso's other hand.

hooray, Vow completed. I got all of my Furioso repaint done tonight, plus got the claws for my contemptor today so I got him finished too. I was cutting it pretty close this time, but then when I was thinking about it, I cut it close last year too.

Excellent stuff mate. Good to see some BA with plenty of bling and some original touches.