I, Skcuzzlebumm of the Harbingers, vow on the honour of my Chapter to paint and present at least 1 Captain on Bike, 1 Vulkan Hestan, 5 Assault Terminators, 16 Space Marine Bikes, 3 Attack Bikes, 5 Scouts, 3 Typhoons and a Redeemer (so my whole new army) to the very by of my abilities on or before the 31st of March, 2012. I promise to provide at least two WIP updates, preferably with pictures, in that time. I vow that if I should fail, I will provide the Librarium with an article and wear the Signature of Shame until my penitence period is done.

So as the list of models for the LPC says I am trying to get a whole new army painted up for 2012. There is a slight catch or you could say addendum to the LPC; I have to have all the above painted to a minimum gaming standard by Friday 20th January as I have entered the army into a tournament and the lists have already been submitted. So that is 10 days.... but I am away this weekend, so in fact that is 8 days left..... nothing like motivation!

After I have gotten them to the minimum gaming standard I am then going to go back and complete the models to the very best of my abilities, as for the past couple of years I have been doing a lot of commission painting which has resulted in me becoming very lax with my own personal projects. So this LPC is all about getting me to change that.

No pics today, there will be some tomorrow, but I have just finished sticking all the models together, based them and have sprayed their undercoats on.

Wait a minute that 35 models in 3 months. Good luck.

Actually it is 35 models in 8 days to a basic standard, then I get the rest of the 3 months to finish them.

Good luck with your vow, brother.

Woah, that is a big vow! Good luck!

Man, and I have trouble getting a Tac Squad, a Command Squad, and a Captain done in 3 weeks.

You sir, have better work ethic than I do.

Best of luck to you.

QUOTE (Drudge Dreadnought) <{POST_SNAPBACK}>
"Facts are chains that bind perception and fetter truth. For a man can remake a world if he has but a dream and no facts to cloud his mind."
"You build it, and it looks good. You prime it, all the work unifies, and it looks better. But then you paint it, and remember why you put all the effort in to it, as it comes to life." - Subtle Discord

"I love it when people try to correct grammar on the internet. As if posting a correction to a post written in three seconds is going to stem the tide of illiteracy." - StigmatTickles, Gamefaqs.com Message Board.

Cheers for the words of support guys,

So 3 days on and where am I on the painting? Well the checklist now looks like this (I tweaked things slightly into job lots):

So yes I have gotten the 'Normal' Bikers and Assault Terminators completed (see my rubbish pictures - sorry I am not great with a camera). I have also gotten all the Melta Gun Bikers 50% completed and they should be finished by the time I go to bed tonight. Which means so far things are on track for me to have everything except the vehicles finished by the time I go the Masters on Saturday morning. Leaving me 4 days for the 3 Typhoons and the Redeemer (which should be 2 days tops). 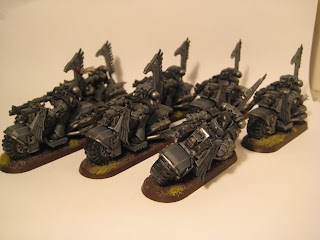 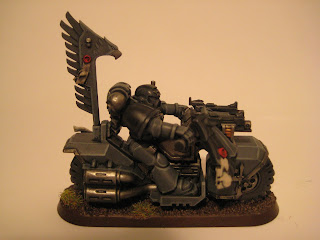 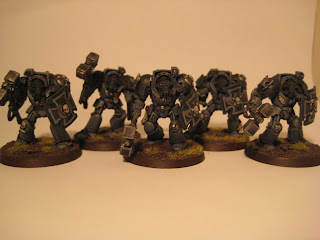 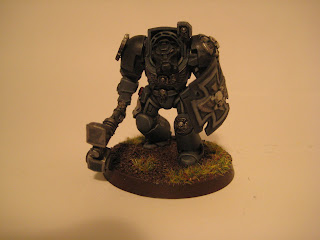 ** for bigger pics see my blog

Again sorry for the crap quality pictures but either way if you can manage to make things out please feel free to let me know what you think. Hopefully when it is all finished I will get my mate Rob Sims to crank out is photography skills and get some more 'professional' pictures taken.

Right back to painting....

So when are you moving to our dark northern forests?

Those are really cool! Good luck on your ambitious vow!

Everything looks extremely nice, and the highlighting is very sharp.

Chicago living, always up for a game of 40k or fantasy.

So when are you moving to our dark northern forests?

I'm back over around 16th March or just after and am staying until around 21st April, so will be coming to Gothcon with you guys at GAST. Then it is back to the UK for my final exams and I move over for good mid July once I graduate. Just in time for an ETC road trip to Poland.

My Blog
Sero Sed Serio
Its a game about war, not war about a game
Back to + WORKS IN PROGRESS +