The Hunt is jointly led by Emperor's Champion Ramiel the Sunderer, and Master of Sanctity Hugo Sandapholon.

The Wild Hunt is are extremely devout to the words of Dorn, as well as the Emperor's Champion Sigismund. Considered Fanatics by even other Crusades, they live entirely to purge the enemies of Mankind. Within this mission, they also seek the First Champion, Sigismund.

Due to various injuries done to the Hunt, Master of Sanctity Hugo hunts Necrons with special fervor, and as such the Hunt is particularly adept at hunting the souless Xenos.

Combat doctrine for the Hunt is simple. In squads organized based on familiarity, each of the three major Cruasder Squads making up the Hunt seek to close with the foe with as much speed as possible. Each Battle Brother shepards a Neophyte, teaching him his craft by example.

To the outside observer, Marines of the Hunt seem almost on the verge of madness, launching seemingly disordered charges at the foe, howling savage battle cries. On further examination, each Battle Brother strikes at the opportune moment, crushing his opponent beneath vastly superior swordsmanship.


The Battle for Gilgamesh IV

In the never ending search for Sigismund, The Hunt eventually found itself in orbit above the Planet of Gilgamesh IV. Champion Ramiel, after receiving a vision from the Emperor, withdrew the Crusade from the Planet, just in time to avoid a Necron super weapon, which obliterated the Surface, and with it the Chapter Keep. What followed is known as one of the most violent boarding actions in history, as the Necron fleet in orbit was systematicallly torn apart by massed firepower, and close range boarding action.

Some time after the Battle for Gilgamesh IV, the Hunt was able to respond to a Black Templar distress signal. Ramiel, Hugo, and his Retinue teleported aboard the ship, but found it in perfect working order, but abandoned. Upon breaking into the bridge, they found the remnants of a lost Crusade, now fallen to Nurgle. Most of the Former Templar's were only basic Plague Marines at best, the Marshal at the Helm was a much more dangerous figure.

Clad in massive, bloated Terminator Armor, he had jammed the Crusade Chaplain's helm onto his head, which was entirely too bloated to fit his unhinged, hanging jaw into the seals. Hugo, full of incredible fury, ordered Ramiel and his Retinue to purge the bridge, while he took on the massive Plague Knight. In the ensuing fight, Hugo systematically and coldly destroyed every possible means for the Plague Knight to fight back. Finally, kneeling befor Hugo, the Plauge Knight's head lolled to the side, causing the helmet to fall off, exposing his head. With Maul and Zeal, Hugo cleaved the fallen Marshal from head to hips, shattering his unholy hold on the ship. His death cry echoed through the ship, and all the remaining Plague Marines dropped dead, the source of thier parasitic feeding gone from reality.

After assuring that the ship was clean, Hugo ordered Ramiel and the others back to the ship, asking only for Philemon's Flamer. With the Chaplain's Helm in hand, Hugo stalked the ship until he found the corpse of the Relusiarch.

His body was totally untouched by the corruption, and a pair of similarly uncorrupted Marines lay beside him. After cleansing the helm with fire, Hugo placed it on his Brother's head, and arranged the faithful Chaplain with his loyal brothers. Then, reciting the vow to Suffer Not The Unclean to Live, Hugo turned the cleansing promethium onto his long gone Brethren, offering them the honourable burial they had been denied. 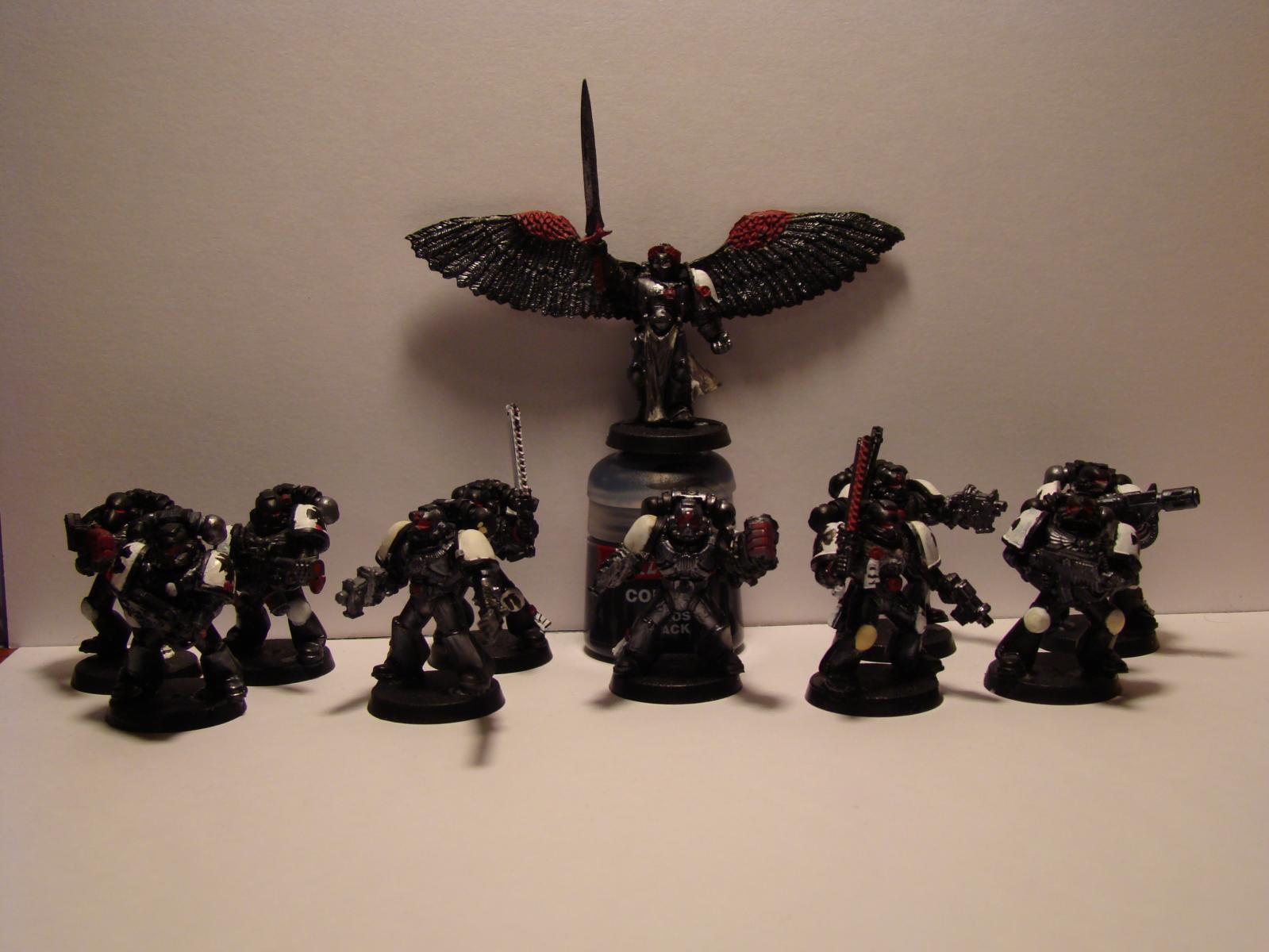 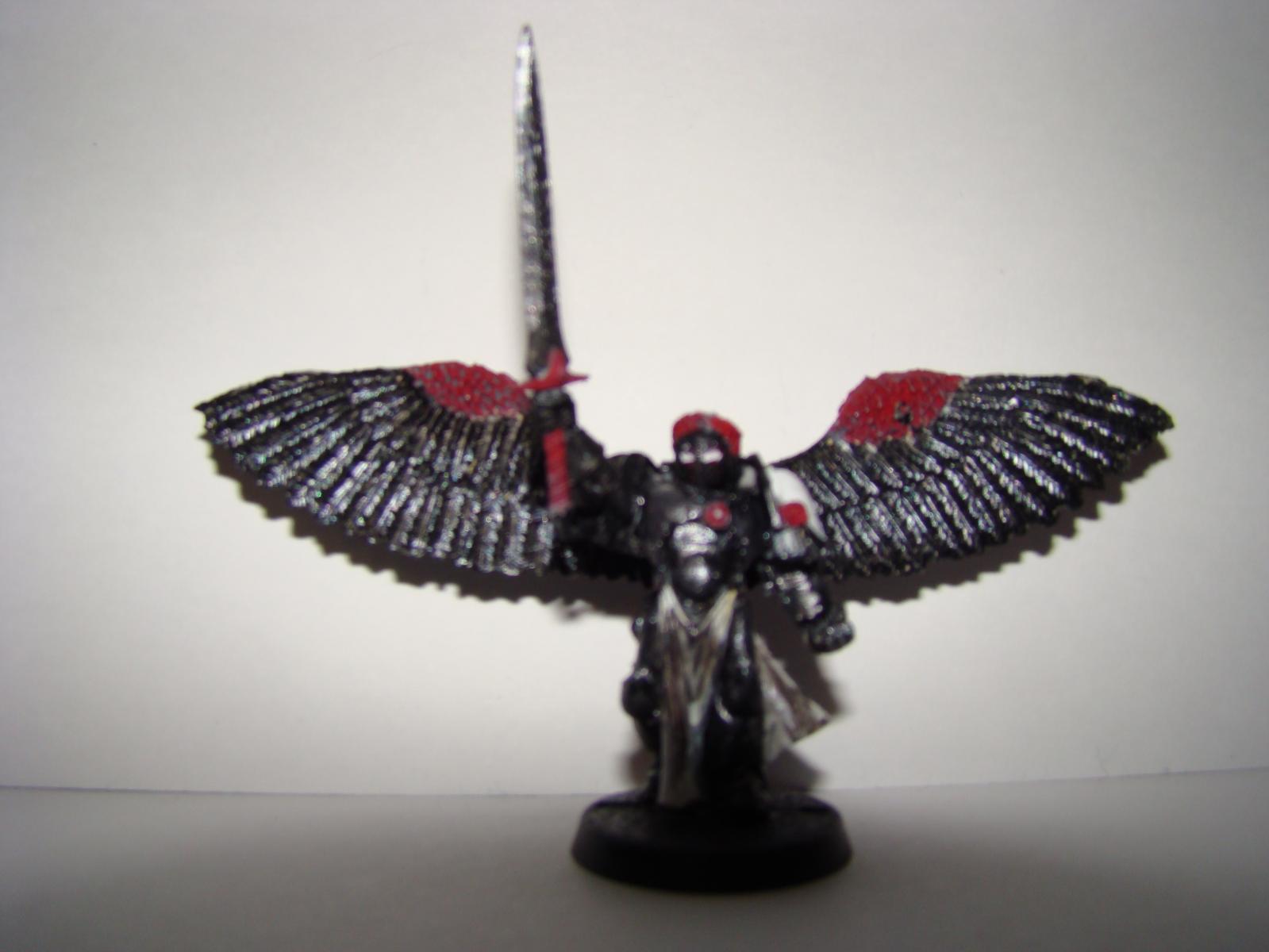 So what next folks? I'm thinking either a box of Tac Marines, or a box of Scouts. Thoughts?

If this is the start of a new army. Then I suppose the mandatory 2nd troop choice would be a good idea. Wether as a firebase squad or second crusader. That depends on how you want to play. Once you have that I guess the neos are more valid choice. And you arrive at the terminator vs land speeder priority territory.
If you do get games in every now and then. Don't forget to build the army with that idea in mind. Trying to keep it balanced, or at least centerd around your idea of playstyle (ex: building an army starting with the fast attack and elites alone is a bad idea for early games)

So this weekend, I'm going to my LGS to purchase a box of Tactical Marines, and a Landspeeder. Any tips on painting/magnetizing the Landspeeder?

New Pictures of a specific Marine, who I like to think of as a Chappy in training. Full army shot should be up soon as well. 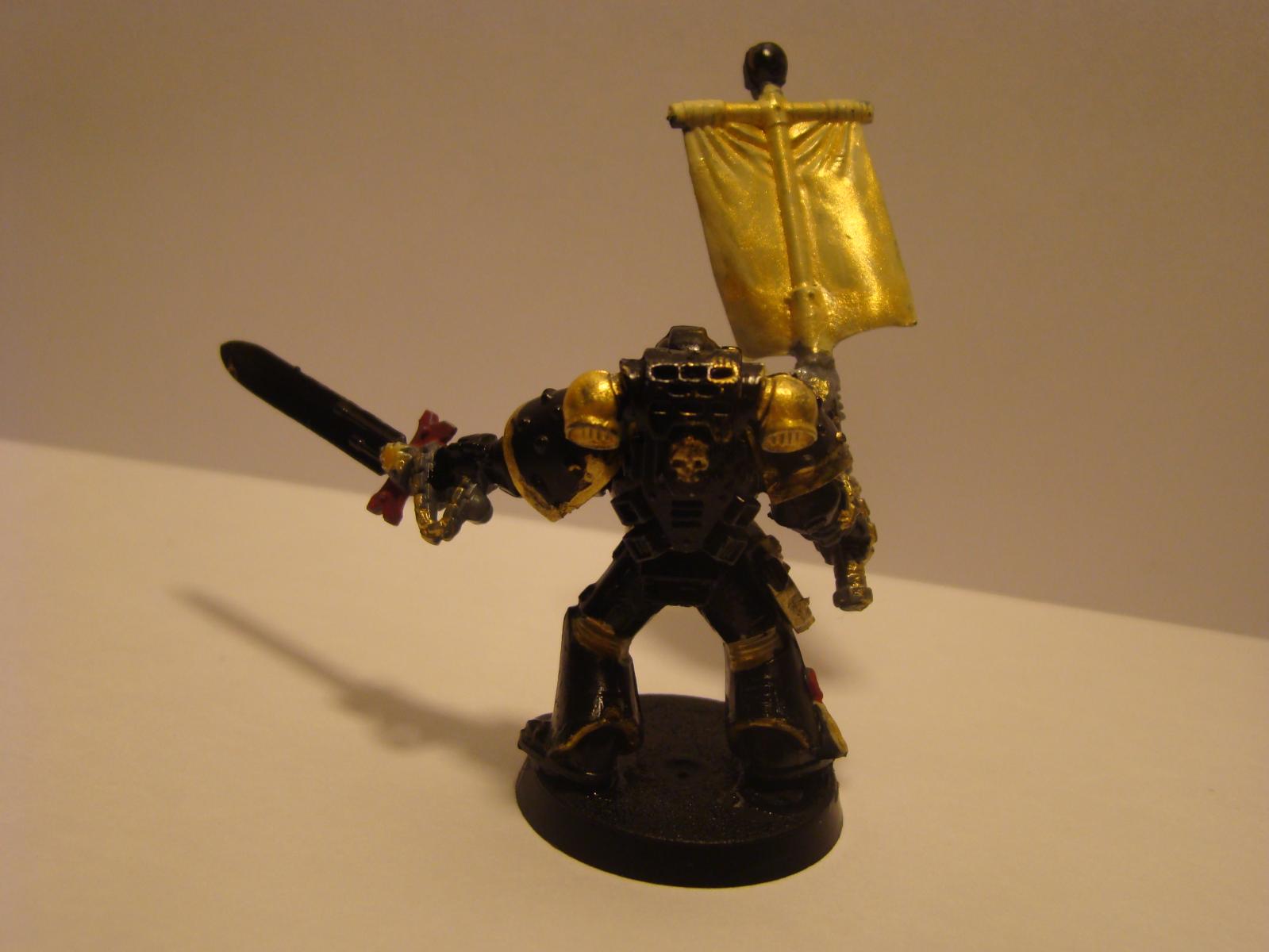 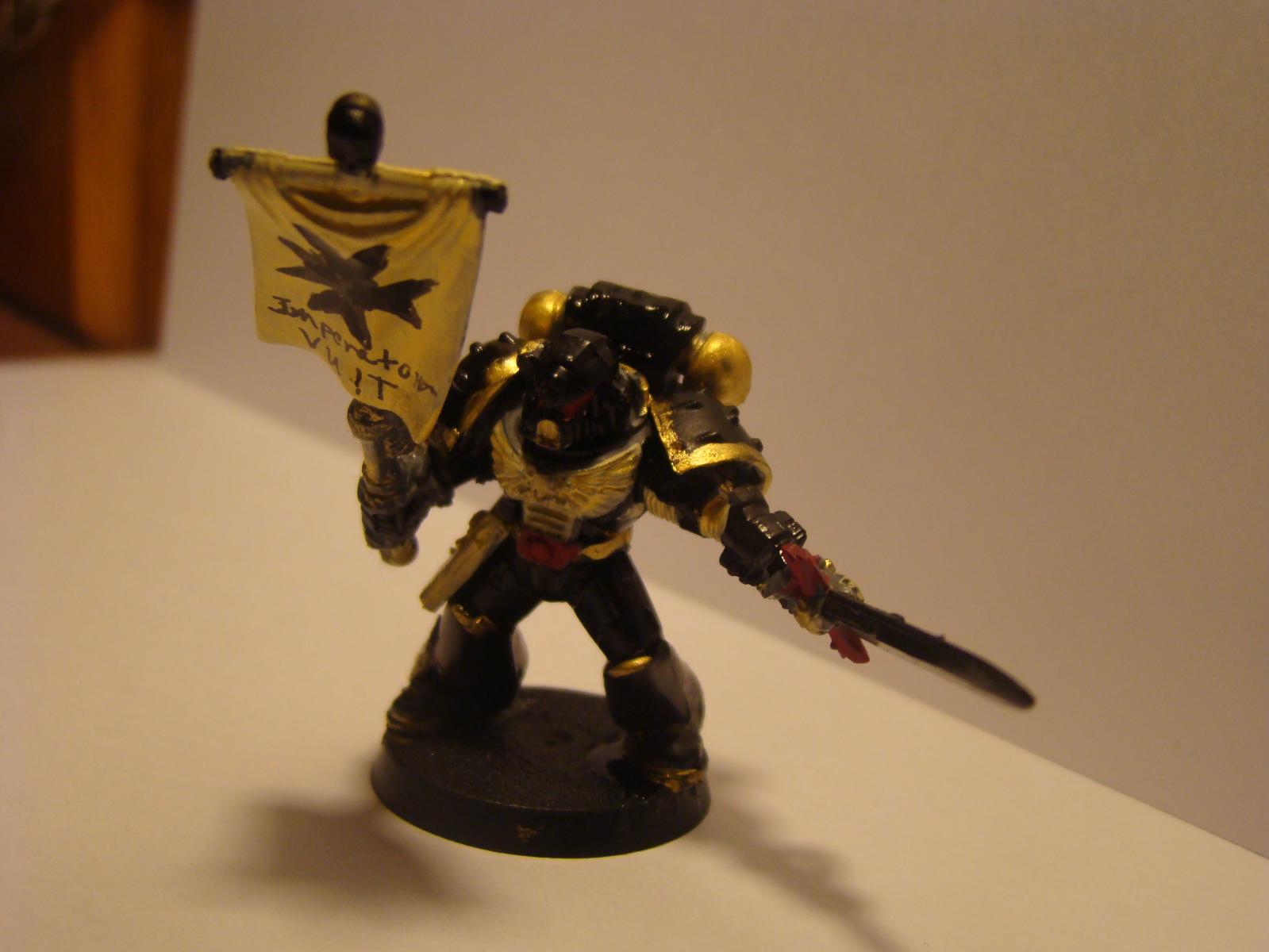 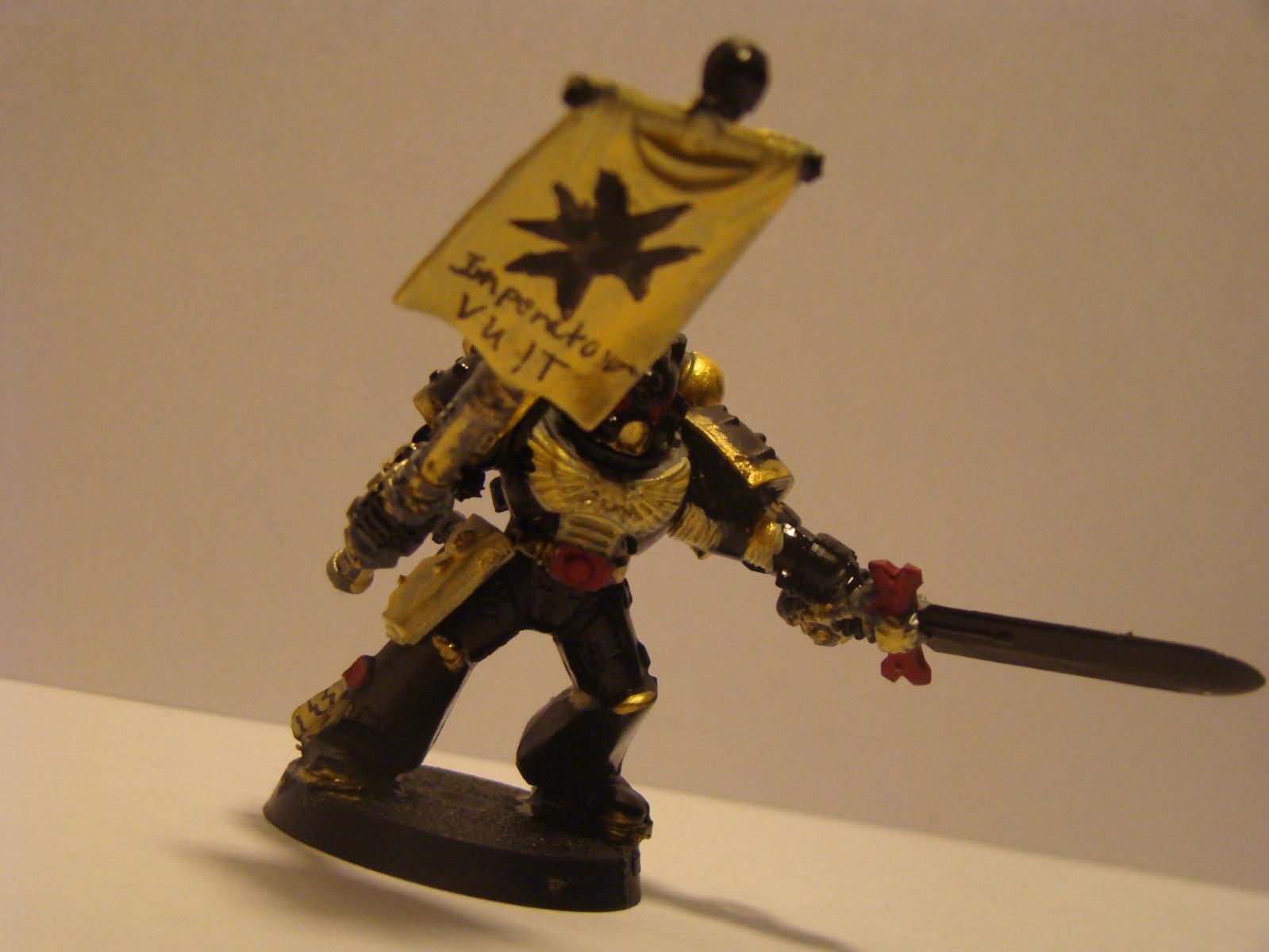 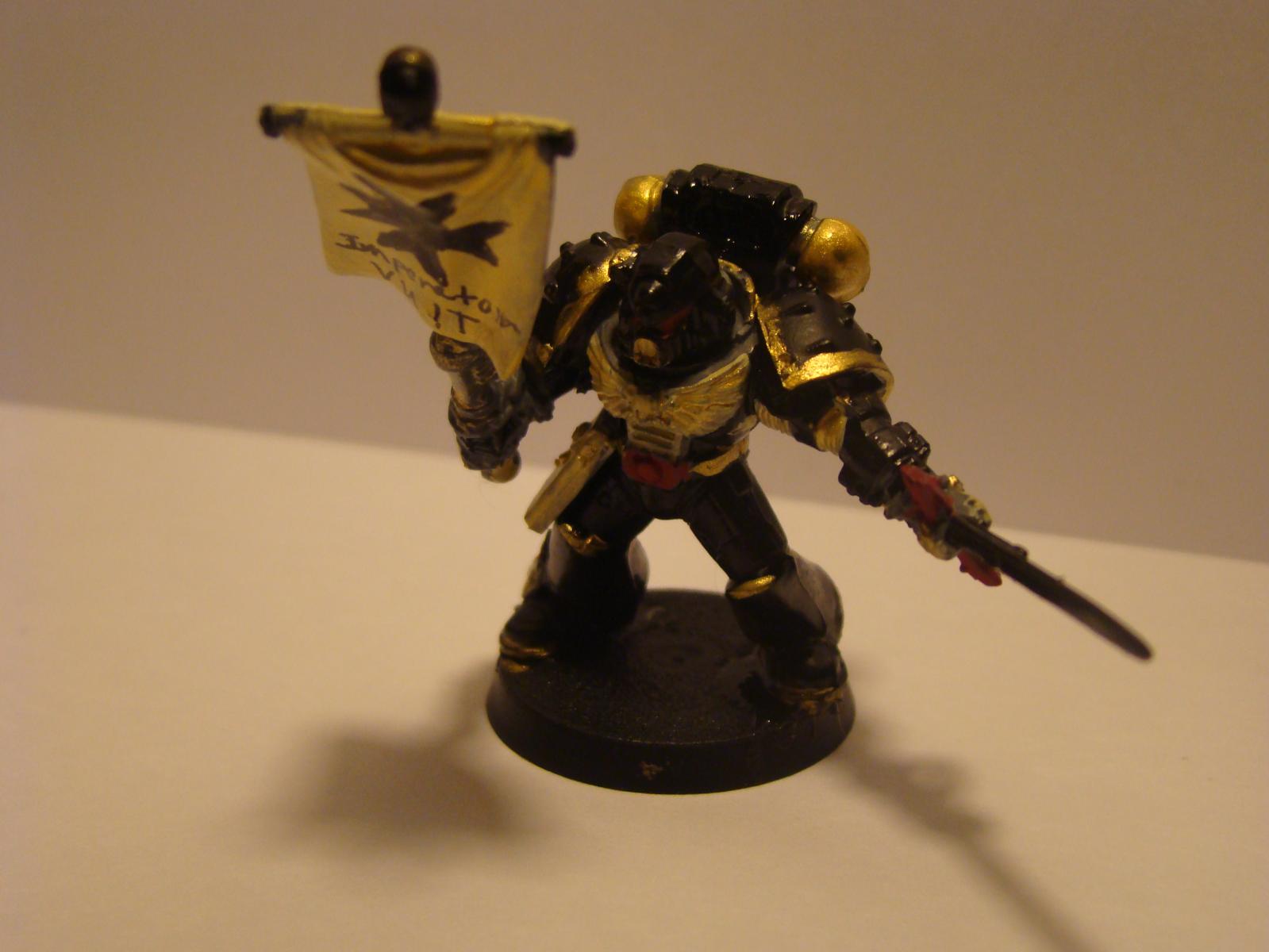 I'm actually really happy with this one, as the banner turned out really good for my first freehand. The banner is made out of a banner, a poweraxe handle, and half an auspex. The photos mute it a bit, but the gold also really pops. This was my first attempt at real highlighting.

New Pictures of a specific Marine, who I like to think of as a Chappy in training. Full army shot should be up soon as well.

I'm actually really happy with this one, as the banner turned out really good for my first freehand. The banner is made out of a banner, a poweraxe handle, and half an auspex. The photos mute it a bit, but the gold also really pops. This was my first attempt at real highlighting.

Well you are a braver man than I am! I know I would mess freehand up...

WELCOME TO THE JUNGLE. WE GOT FUN AND GAMES.

If you are going to buy a tacsquad why not buy the chapter upgrade set too. Letting your opponent know that not only do we kill his minis with a Zealous smile, we look awesome doing it.

Black Templars has been kicking ass since second founding.

The Apokrypha Crusade, My Black Templar Crusade
Back to + BLACK TEMPLARS +