I took the plunge:

I, mustardParty of the Blood Angels, vow on the honor of my Chapter to paint and present at least one ten-man Assault Squad with magnetized backpacks and jump packs and at least 5 Vanguard Vets with jump packs, on or before the 31st of March, 2012. I promise to provide at least two WIP updates, preferably with pictures, in that time. I vow that if I should fail, I will provide the Librarium with an article and wear the Signature of Shame until my penitence period is done.

I've been meaning to get a squad a VV's done for FOREVER, no there's no turning BACK!

Quick update - here are my ASM guys, ready to be committed to the ranks: 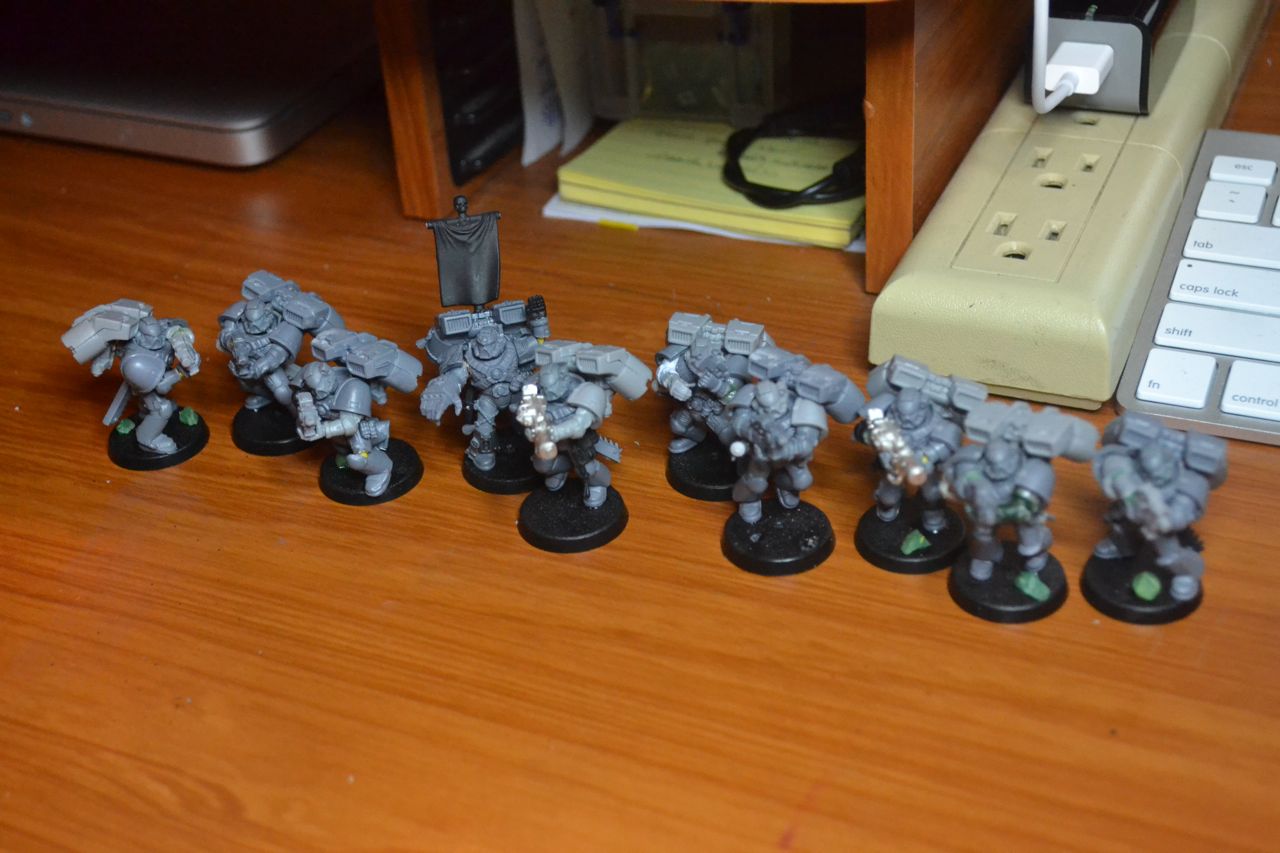 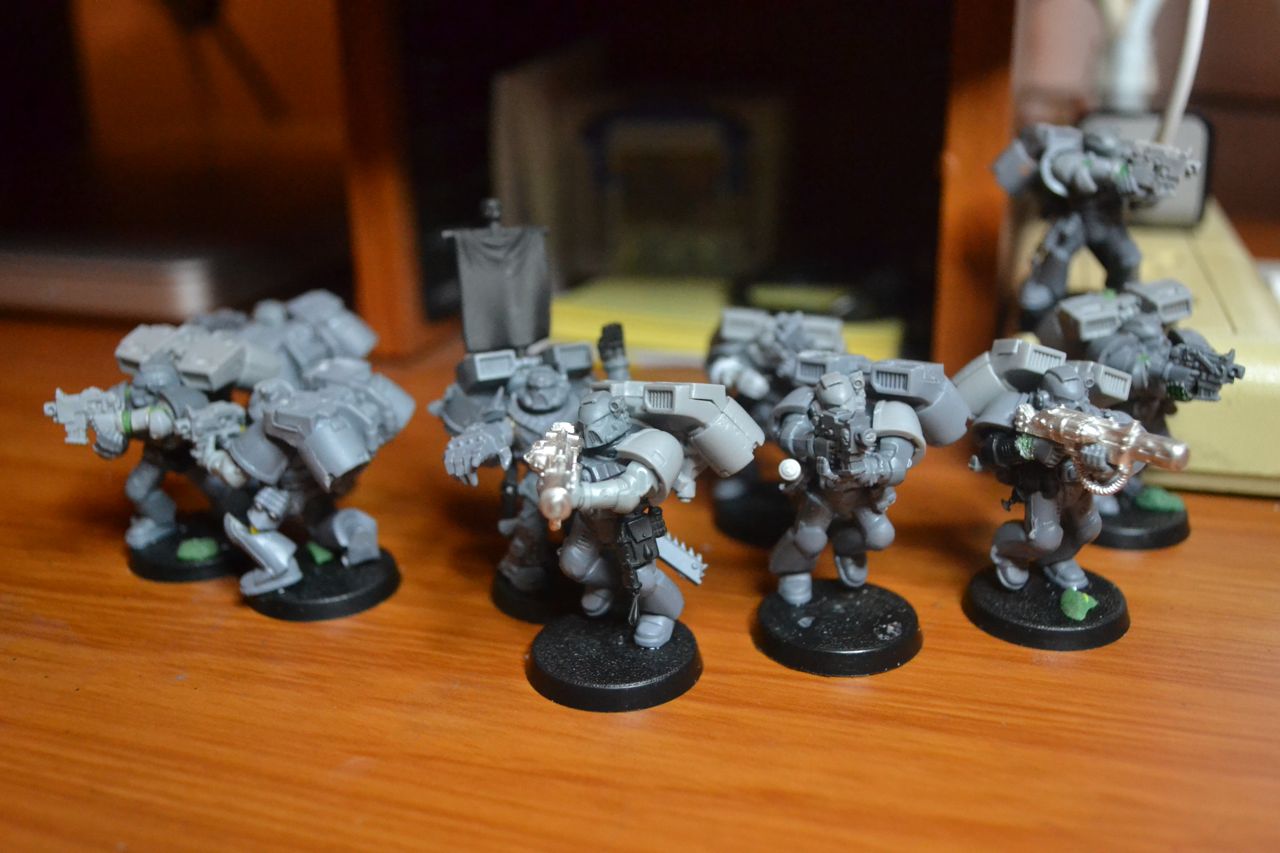 I wanted to do something a little different with these guys. I was thinking, being Blood Angels, these would be Marines from one of the Tactical Squads of my Battle Company, so their combat doctrine is a little different than a your proper Assault Squad, so more reliance one their side arms rather than their chain swords. They would still play as a normal Assault Squad on the table though, just flavorz.

I had put these guys together and been planning to attack them for a while! Now they can finally find the field of battle.

Wow! I love the tactical use of the pistols. Very nice. Can't wait to see them painted.

very nice stuff so far,
i like the "combat stance" shooting pistols...was the conversion difficult ? also i hope your going to drill those barrels

all that effort on a cool squad,might as well go all the way with it!

very nice stuff so far,
i like the "combat stance" shooting pistols...was the conversion difficult ? also i hope your going to drill those barrels

all that effort on a cool squad,might as well go all the way with it!

Thanks guys! I wanted them to feel different from the standard ASM squad, and I've always liked the look of that kind of combat stance (it's called the Weaver Stance I guess, found that out when I was looking up reference pics when I was posing out the minis). It has a spec ops kind of flavor!

That conversion was actually pretty tough for my clumsy armature modding ability, but by the 5th guy I had found the best arms in my bin to be using. It's really pretty hard to get marines to reach across their chests though, it takes a lot of finagling!

And I'm way ahead of you on the barrels too

Don't put your trust in revolutions. They always come around again. That's why they're called revolutions. People die, and nothing changes.

How do they rise up?

Updates to my ASM squad going up on here: 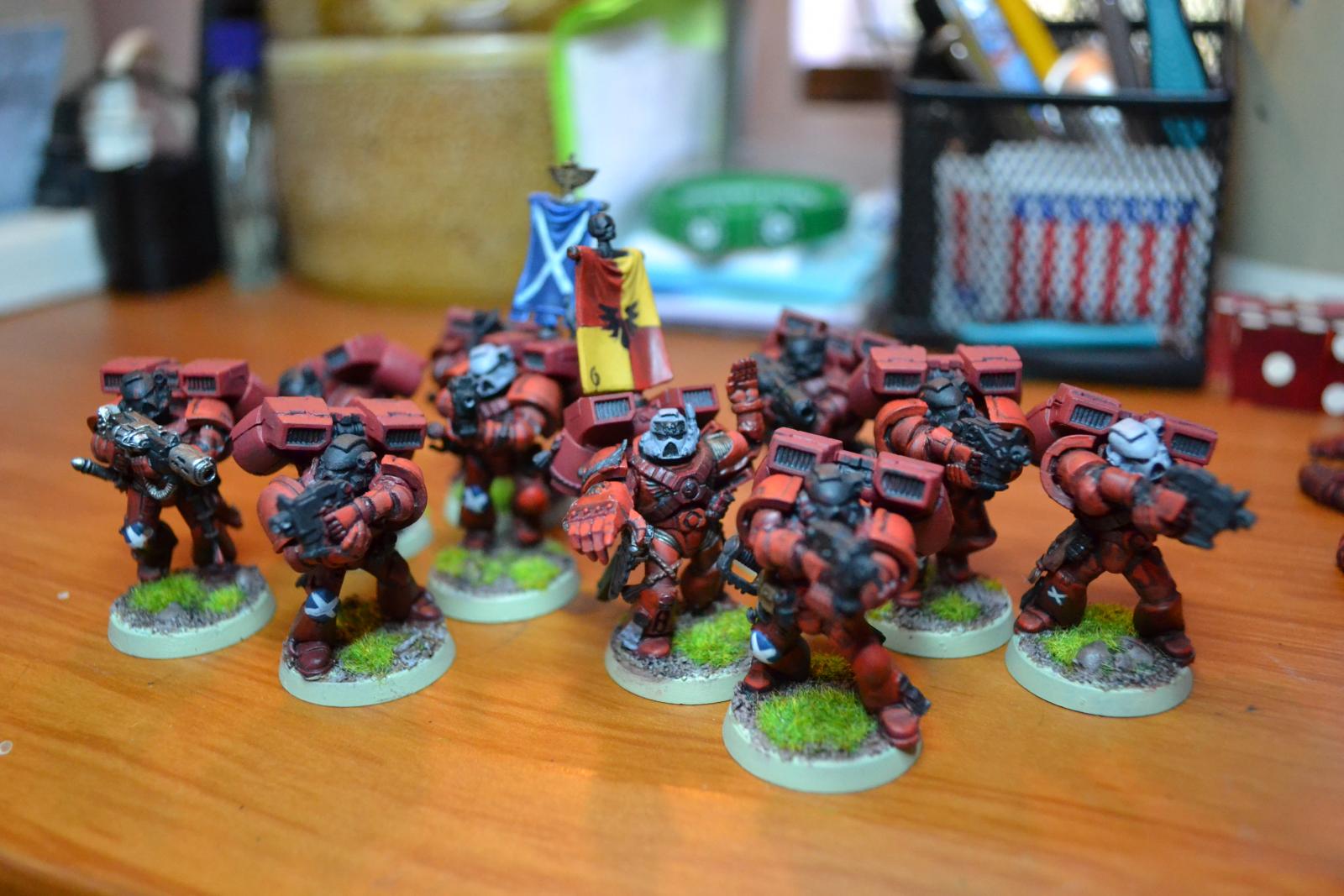 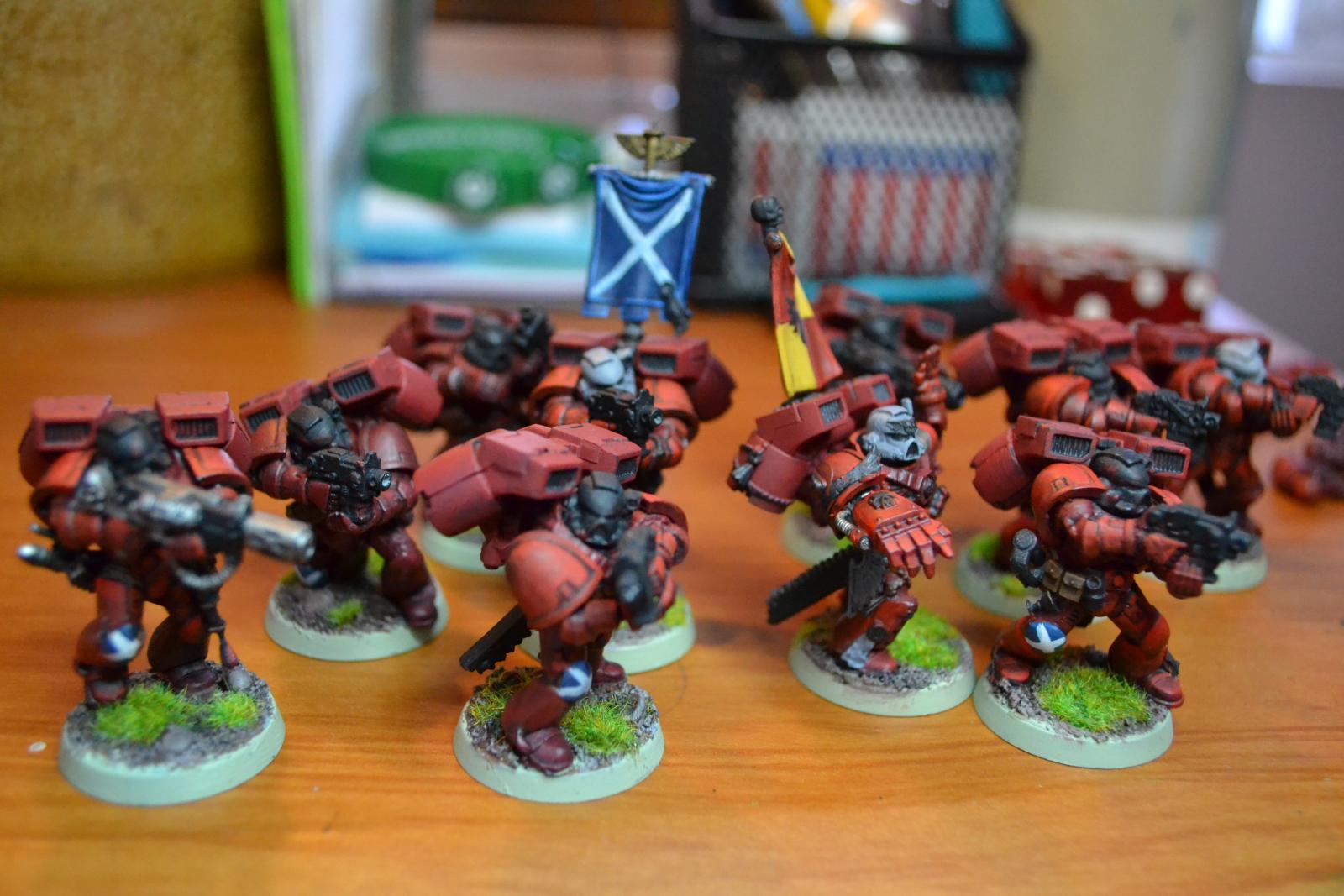 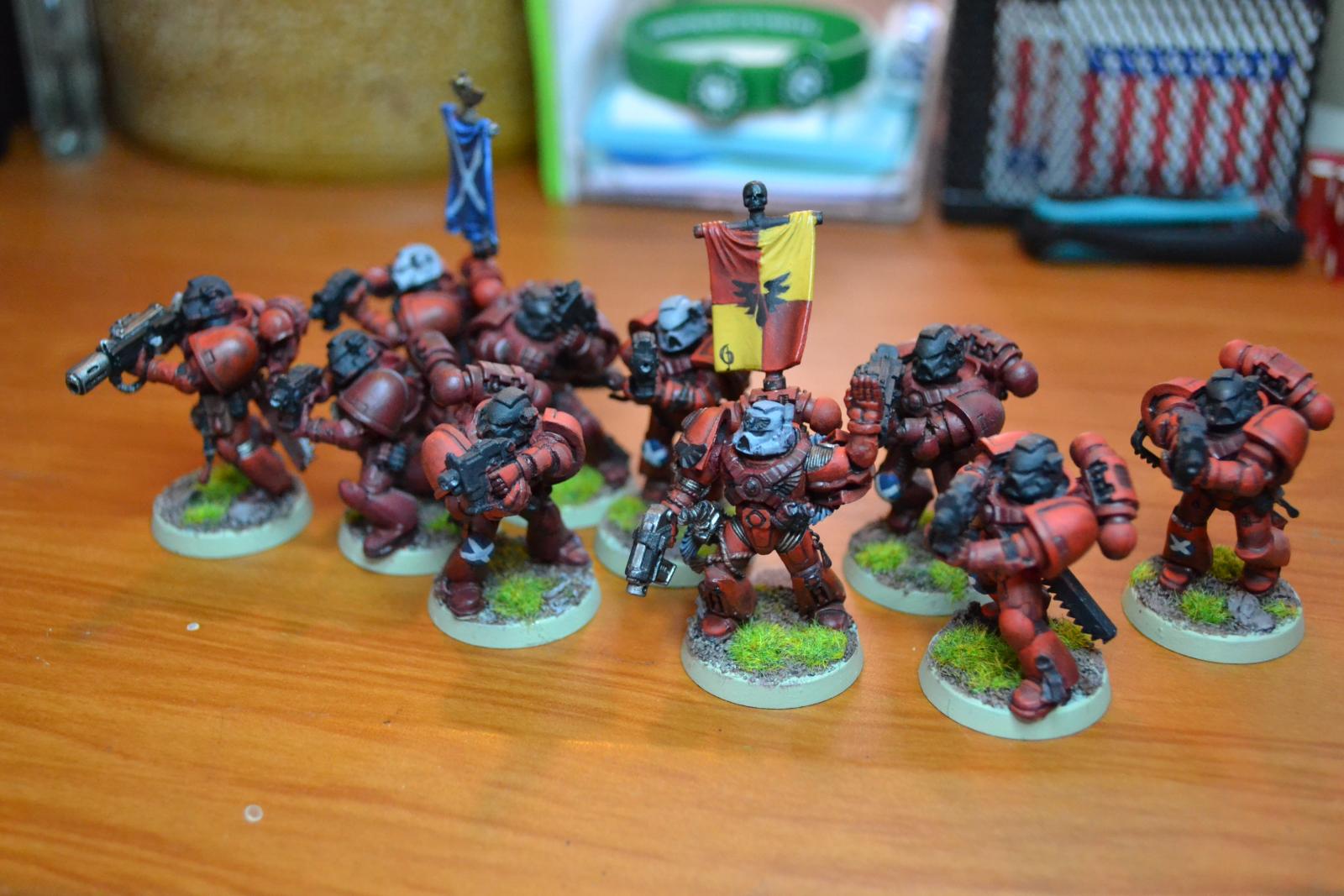 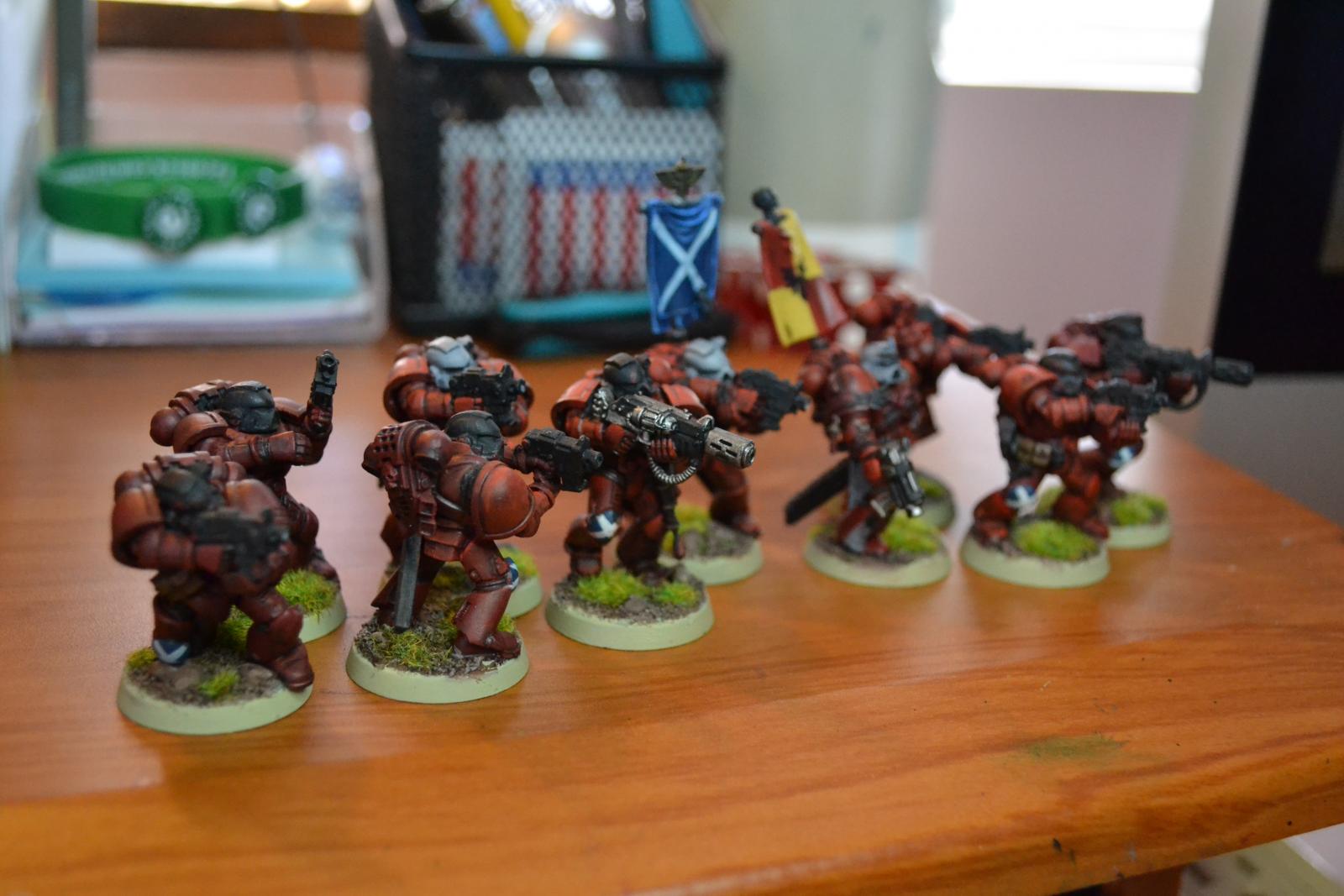 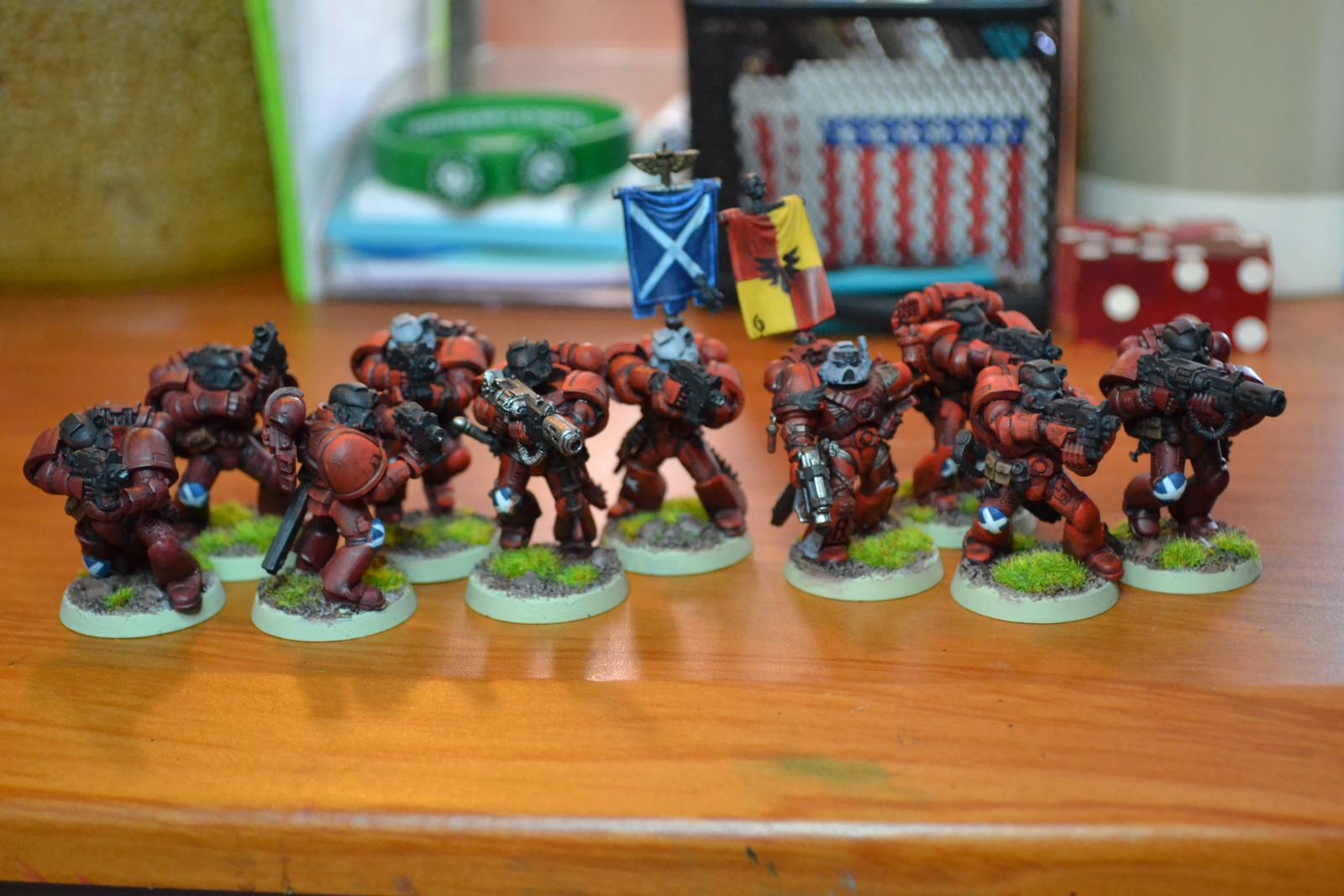 Squad's about half done except of the helmet, which are all getting a light grey coat before I put the yellow on. Each squad has two banners, the Sergeant has the banner with the chapter icon backed by the company's heraldry. The number 2 guy has a banner that corresponds to the squad marking's on the knee pads. I like banners, banners everywhere!