I've slowly been building a Grey Knights force. mostly because I like the models and the conversion opportunities but with the goal of a playable army.

Pretty much everything is work in progress at the moment. 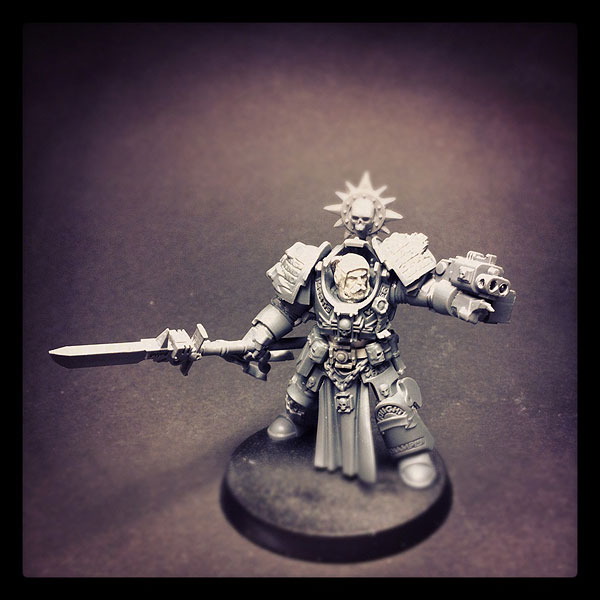 Head from Puppetswar. Lengthened at the waist with plasticard. 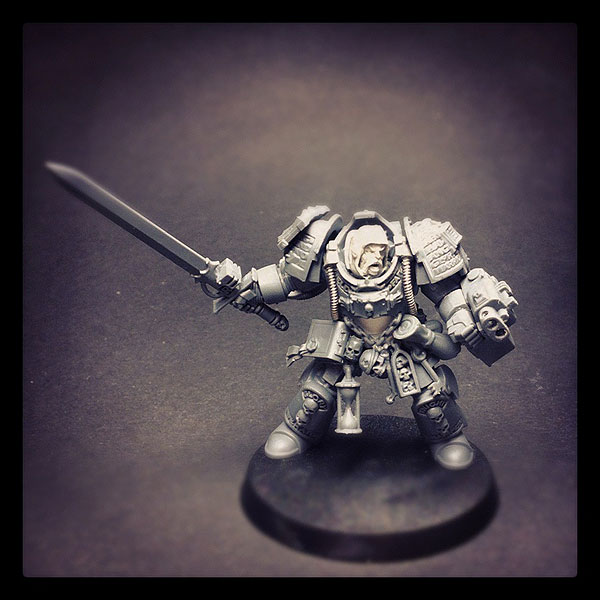 Head from Puppetswar. Lengthened at the waist with plasticard. Extra bitz from Brettonians and Flagellants. Added psychic Hood from guitar string and green stuff. 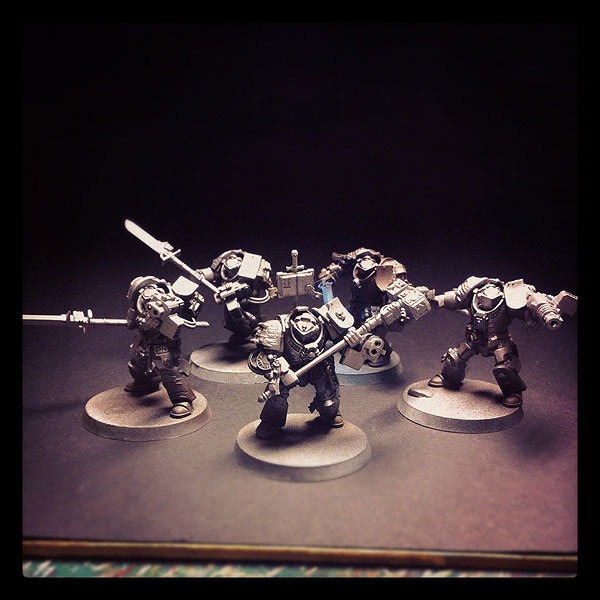 All have added height at the waist, I don't like how it otherwise looks as if the ribcage rests on the hips otherwise. 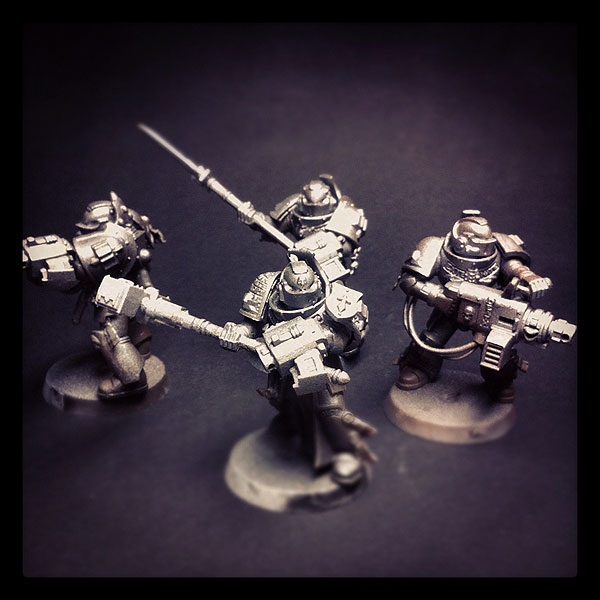 These are also made taller. 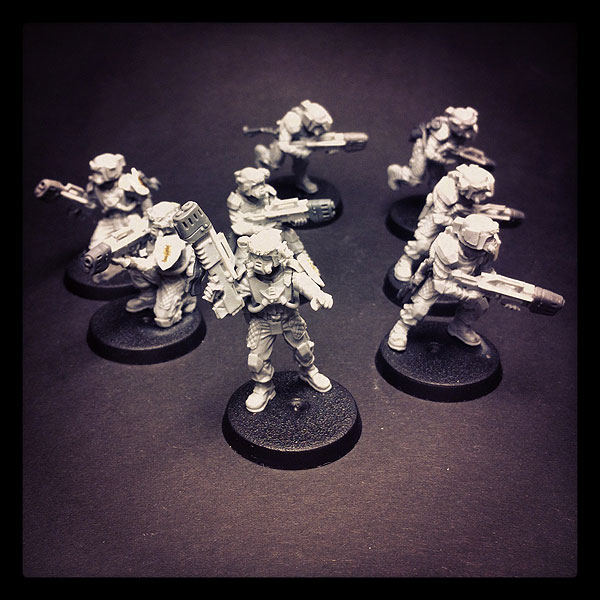 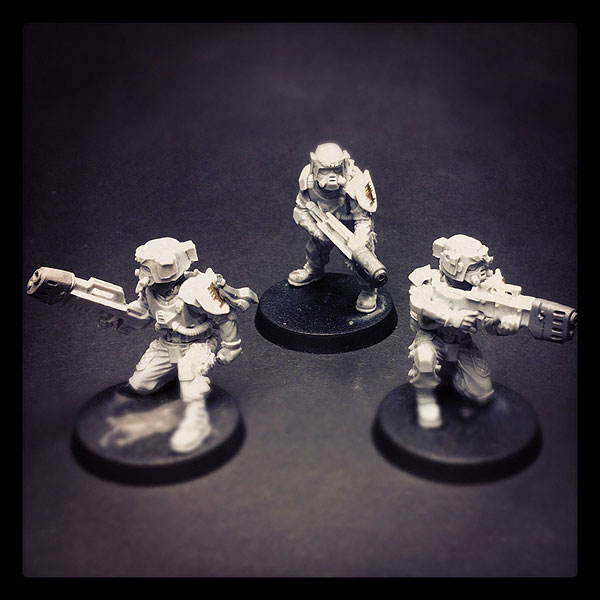 The Acolytes are armed with Demag pattern Plasma guns. These are lower powered than regular Plasma guns but allow for a higher rate of fire and extended range. Counts as Storm Bolters. 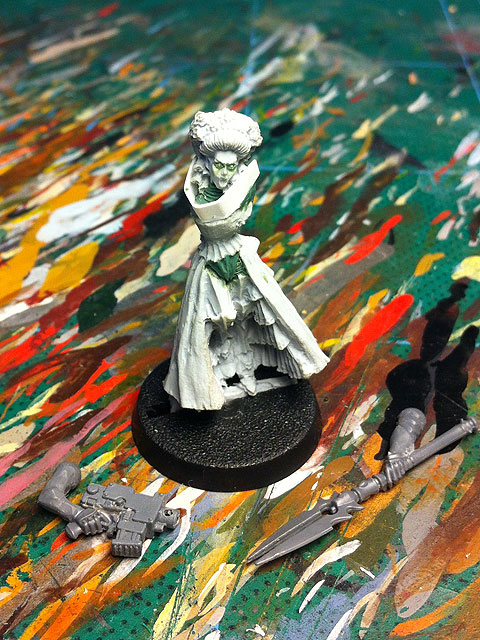 Counts as Coteaz. Will be sculpting armour parts for the arms and torso. Need to find a good hammer for the Daemon Hammer. 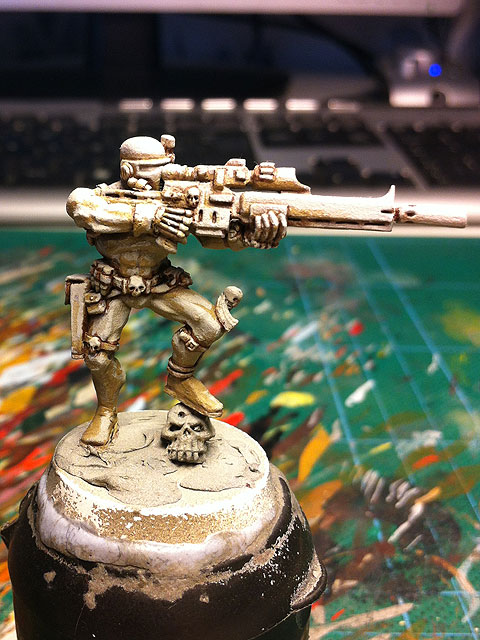 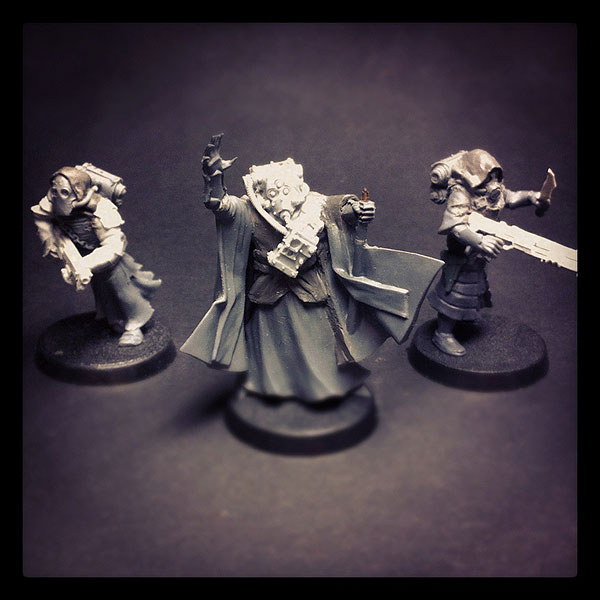 Counts as Jokaero and Warrior Acolytes.

That Jokaero counts-as is pure awesome. I'm looking forward to seeing this project of yours in progress. So far all your threads have been very enjoyable ^^

Looking forward to this. Copied my Space Wolf scheme from yourself and got great results so excited to see how the Knights will be done.

'For nine days and nine nights I hung from the spines of that great tree, my blood awash with toxins, my mind awash with visions. Where brothers died, I was reborn. This is what it is to be a warrior of the Thorn Wreath'  - Jor Yestine, I Company, Crimson Shrikes Adeptus Astartes

A Dark Song - A collection of armies

Very interesting work so far.
Love the 'taches on the GKs!

Every time I see people converting up =I= henchmen it makes me want to start some!

Will be watching this thread!

The Inquisitorial shields on the IG are just awesome!

Grand Moff Tarkin was a gamer

Really cool terminators. And good photos as well. How did you take those?

I work as a tattooer; Visit my blog at gallontattoos.wordpress.com

I like the use of chaos renegades as admech. Good eye for conversion there.

Hellmarines are a new cult unit that come with a Hellmark that gives them Hellfleet and Hellhammer of Wrath. If one of your HQs is Chaos Lord Helldark the Hellish, they count as scoring troops.

well, considering that loken has been crushed by a titan/falling building, survived a virus bomb,, survived a duel with abby, punked lucius the eternal, took a world eater in cc, pwned the 2 marines the WE was with, and then came back to his sanity with a single sentence... i believe that loken will manifest whatever abilites the BL decides to give him.

maybe he is a latent psyker that abilities were brought out by the trauma he suffered in being so awesome.

Hi Kapturowski, Your works are awesome,I love your GM and Librarian, mostly for the choice of items around the pelvis of the libby

what are your plans for the future?

@interkino
Thanks! I plan to add more Terminators so I get two squads of ten and fill out the Interceptor squad to ten as well. I've got a Dreadnought in my bitz box which will get a rifleman treatment and I'll add another later on. I've got a box of DE Whyches that I will convert into Death Cult assassins. That's it for now I think. :-)

@Circus Nurgling
Yeah, unfortunately I can't take credit for it, several people have done it before me so I just stole my inspiration from them. ;-)

@Gallon
Thanks man! I used Instagram to add filters and selective blur.

@ImperialTemplari
Yeah, I think they fit the knightly theme very well, they gave me a lot of inspiration.

@Kierdale
The Henchmen are some of the coolest characters in 40K and a great outlet for converting interesting models!

@kobrakei
Nice! Hopefully I'll focus on them long enough to get some paint on them. 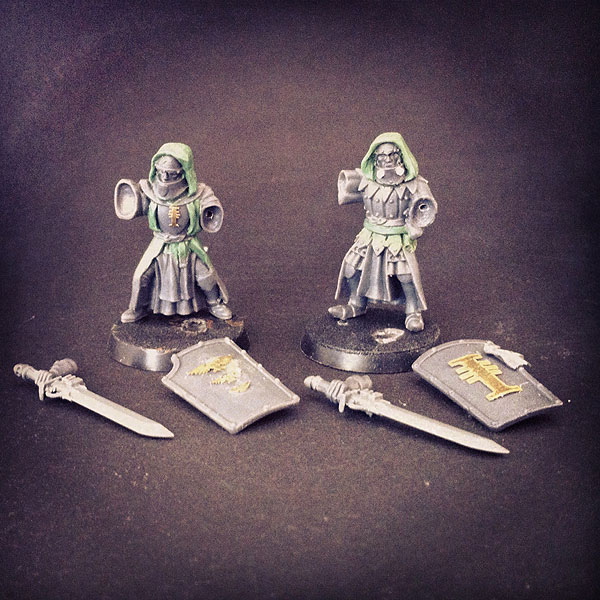 Bodyguards for the Inquisitor. 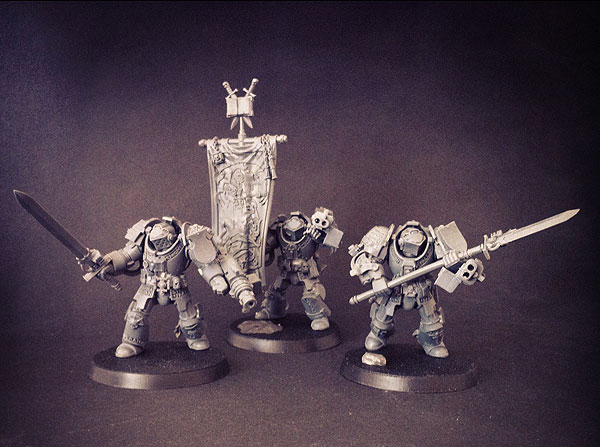 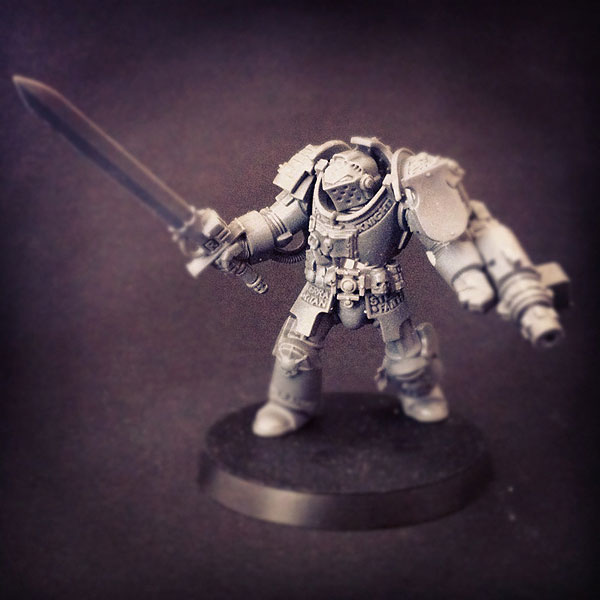 Here you can se some of the plasticard used to elongate the waist. I've used a Terminator Honour from the Terminator box to make a new belt buckle.

You do realise that every single one of these models is absolutely top-notch?

I especially love the Grand Master and the Librarian. And I'm looking forward to seeing you actually paint these models!

Wow, those are some great looking conversions. Really digging the Puppetswar heads. Didn't see those when I was buying bionics from them the other day and now I'm kicking myself. Have you seen Titan Forge's "Demon Slayer" shoulders and robes? Can't decide if I like the shoulders or not, but the robes look cool, IMO. Also, really great use of filters on those photos.

The Bodyguards for the Inquisitor look ace mate! Great use of GS - less is more sort of thing. They will look real nice when all doe up

Wow, these are shaping up very well. Really like the inquisitor's bodyguard, they really look the part. Hope to see more soon.

Your choice of models is awesome! Especially Inquisitor and Crusaders.
I'm great fan of yours DG and SW, so i await for updates!

I'd kill for Rhonin Leman Russ model. If u have one, PM me please. 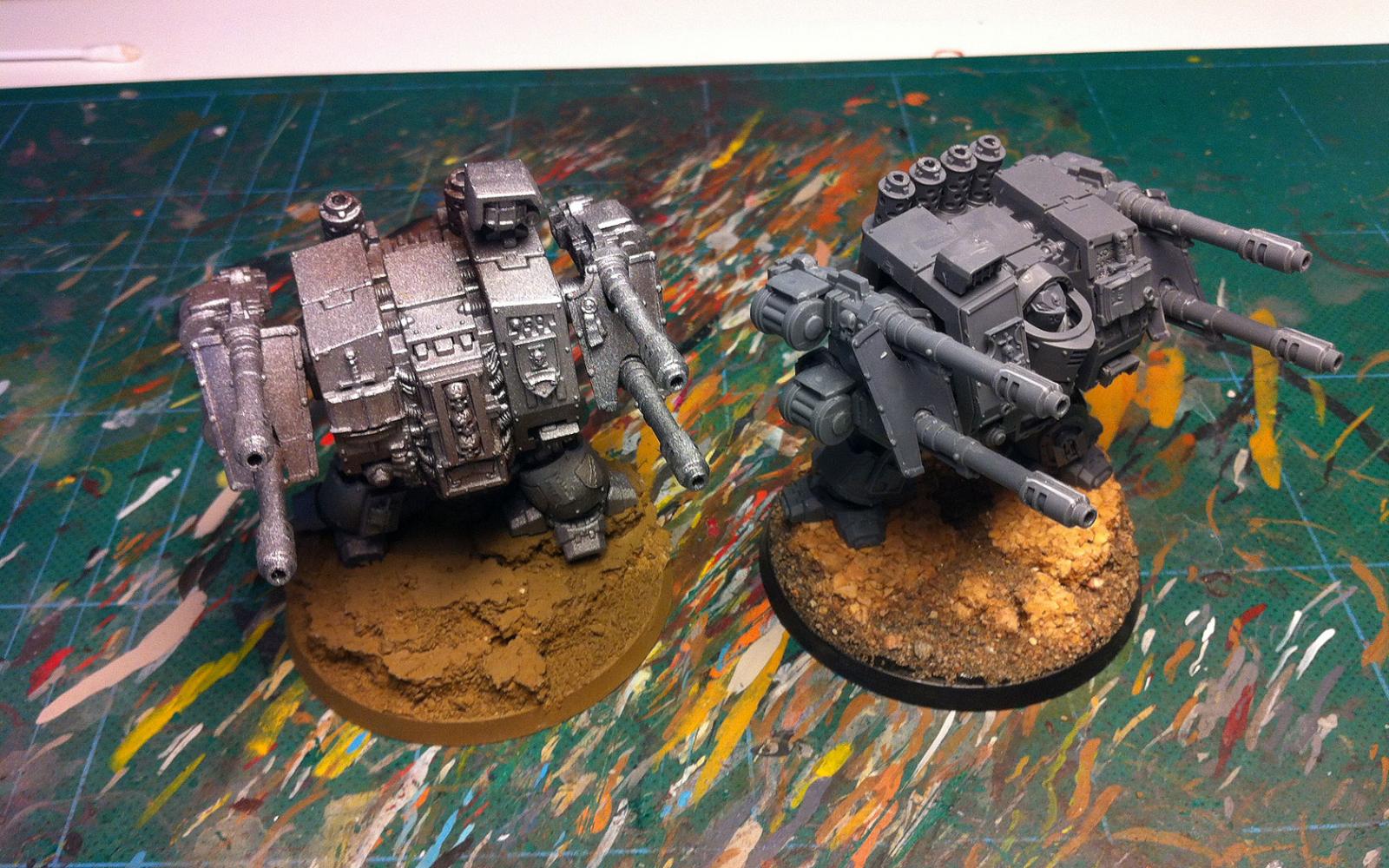 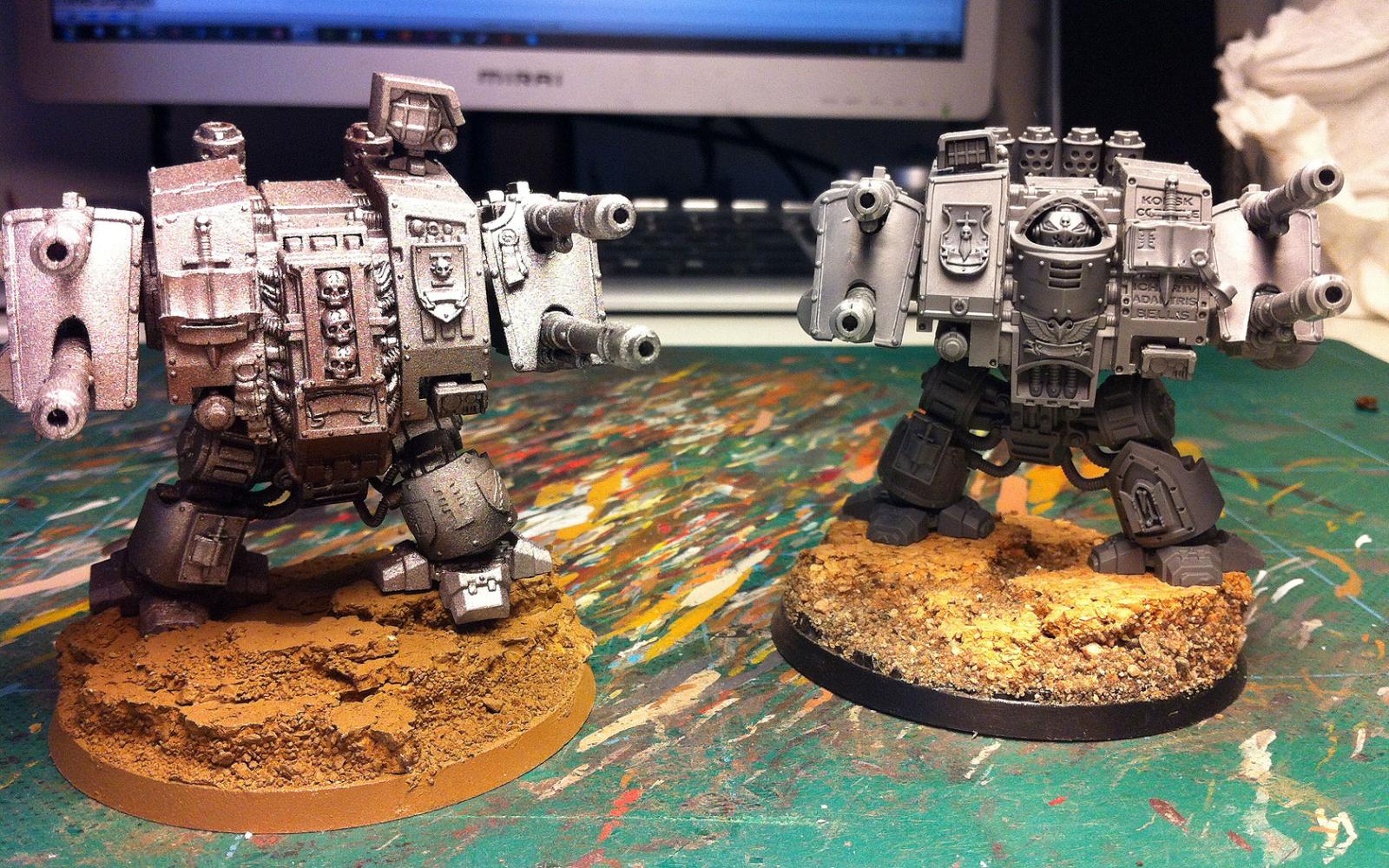 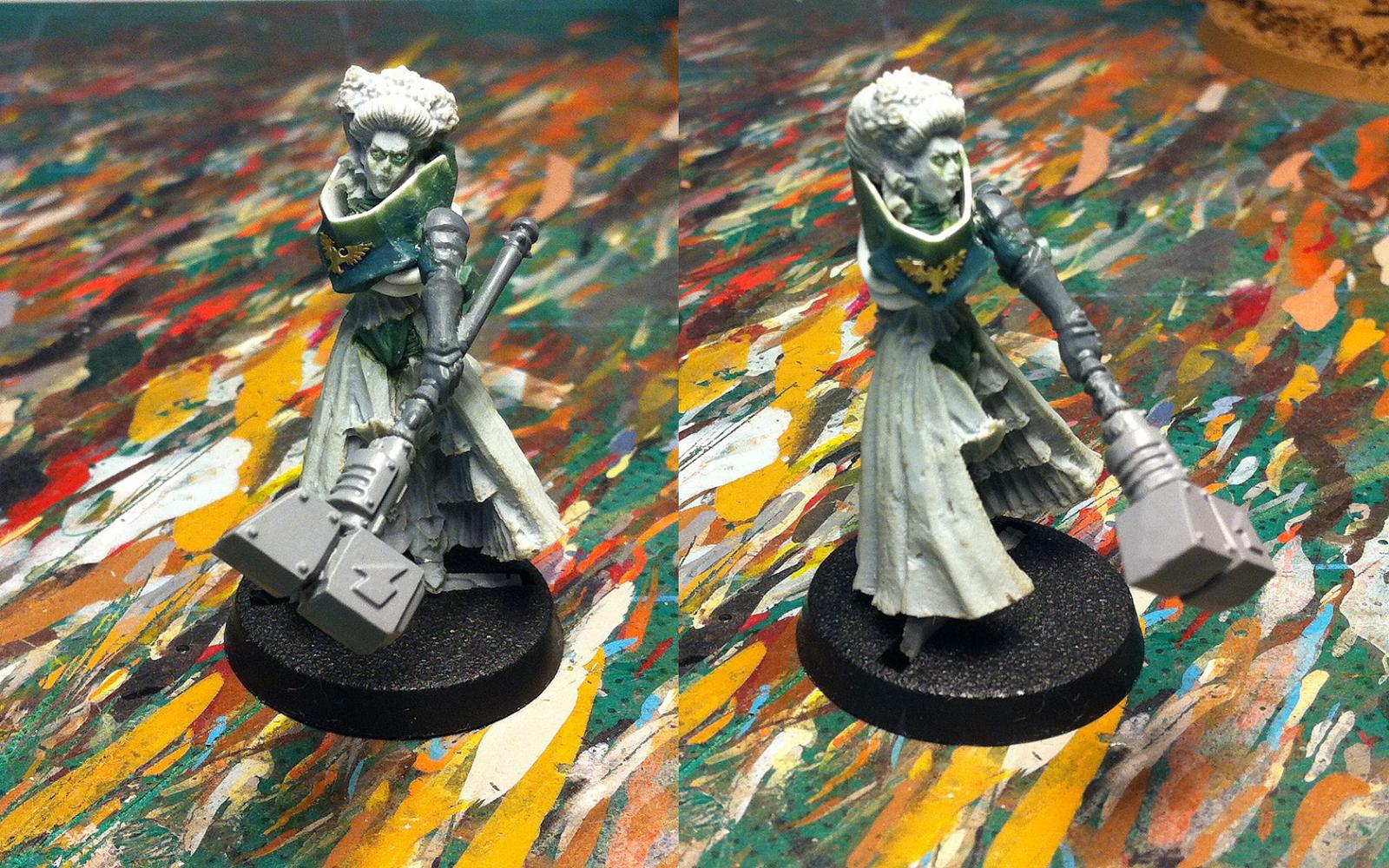 My count as Coteaz. Building up the armour.

Fantastic stuff! I wished there where some Jokearo monkeys up in this topic but this is even better!

I'm not really keen on the autocannon arms and I think the hammer head looks too big on the Coteaz model, but that's not major disaster

Dig the heck out of that Inquisitor model. With a hammer like that she's gotta be burning through combat stimms like they are going out of style. Also I really like the armor.

What is the base models for your Inquisitor and your Jokearo?

"They shall be MY finest warriors, these men who give of themselves to ME. Like clay I shall mold them and in the furnace of war forge them. They will be of iron will and steely muscle. In great armor shall I clad them and with the mightiest guns shall they be armed. They will be untouched by plague or disease, no sickness will blight them. They will have tactics, strategies and machines such that no foe can best them in battle. They are MY bulwark against the Terror . They are THE Defenders of Humanity. They are MY Space Marines and they shall KNOW NO FEAR!

What is the base models for your Inquisitor and your Jokearo?

looks like the jokaero is an imperial mage with extra bitz..the warriors are man at arms from bretonnia and empire flagellant (sx)..
the inquisitor comes from the new vampire flying throne kit..or is it simply a new failcast lamiah? Ordo Brianteo's Master of the Forge

That's Isabella von Carstein herself if I'm not mistaken. She's shaping up to be a VERY nice inquisitor.