Create and show off a banner for your favourite unit/character/vehicle & maybe add a few words about it.
How you do it isn't important, all that matters is that you can communicate the design/idea clearly.

You can for example:
-draw it on a piece of paper, scan it and upload it for people to see.
-create it in photoshop/gimp or similar.
-paint it on a model/canvas

It can also be a banner that you've already created.

Well, this is a banner I'm working on

are you talking about the things at the bottom of our posts or an actual banner???

"The Orks are the pinnacle of creation. For them, the great struggle is won. They have evolved a society which knows no stress or angst. Who are we to judge them? We Eldar who have failed, or the Humans, on the road to ruin in their turn. And why? Because we sought answers to questions that an Ork wouldn't even bother to ask. We see a culture that is strong and despise it as crude."

What we imagine is order is merely the prevailing form of chaos.

Why an actual banner on/for a mini, like these (fantastic ones), by GuitaRasmus:

Wow, impressive painting, and really impressive freehanding on the banners! That carnifex head on the dreadnought was a really clever conversion too.

Will have to make a banner for my Night Lords warband. I'd like something that screams NL and also celebrate the successes of my army during the 13th Black Crusade.

That's pretty challenging, can't even figure a decent concept to start with.

Lord Silas, Knight of Thorns, Lord of the Lions of the Despoiler.

Well here is the icon/banner for my Thousand son terminators that I'm making: 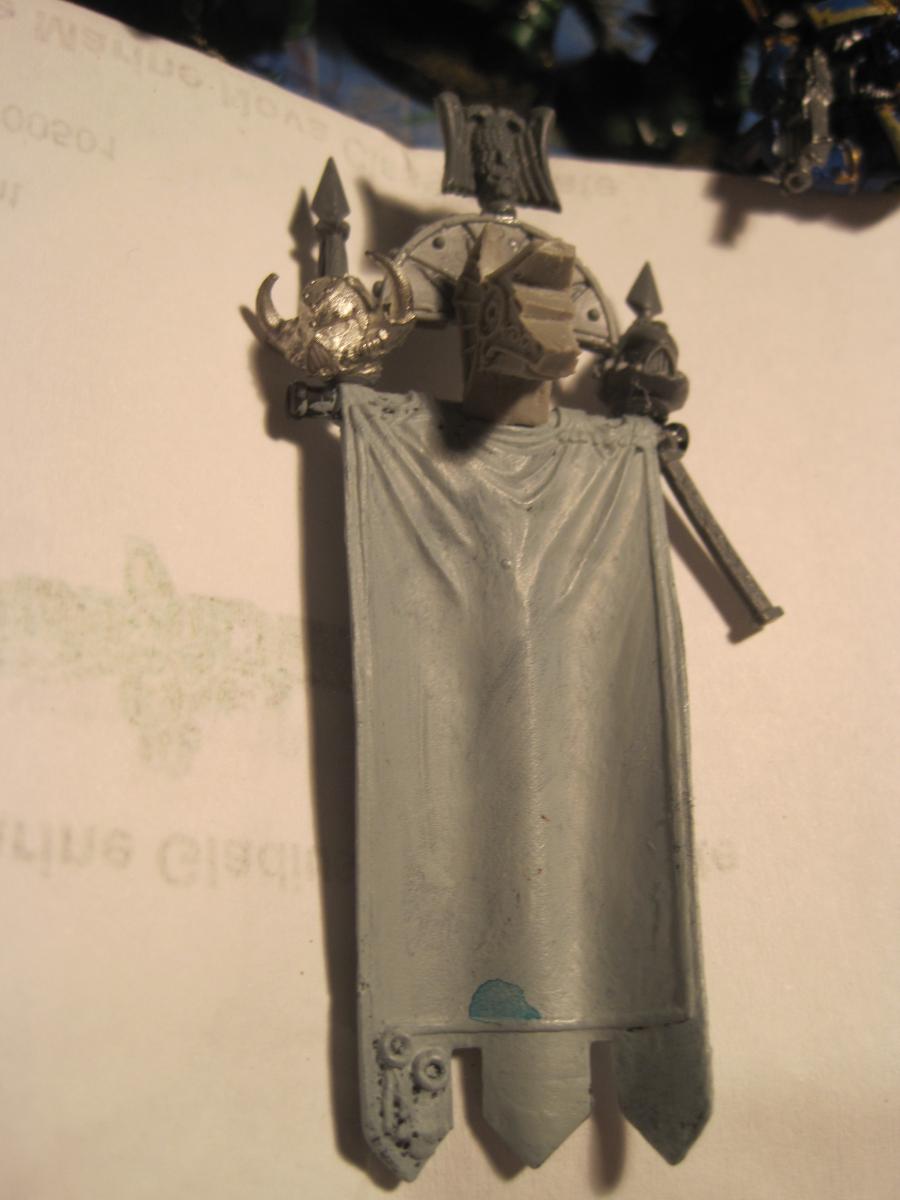 Am thinking the background will have multiecoloured flames, with VII being grasped either by in a falcons talons or a jackals (or possibly crocodile) jaws, with heiroglyphs, kanji and runes around as well, the helmets will be black legion and space wolf.

where does it come from ? Looks like FW's resin to me.

Lord Silas, Knight of Thorns, Lord of the Lions of the Despoiler.

The main banner is the command squad one, but it is one I salvaged off an old model (and when I got the idea of the banner I did not wait to strip it..ops

), the spikes are from the chaos terminator kit (I shave those ridiculous, absurd and silly backspikes off my terminators) a tomb kings banner top (with a bit of metal sprue from a hel dorado miniture extending the pole behind it, the eagle is the marine commend squad set again (or is it the captain?) the streamer bit is off an old damaged tzeencth icon top I got off a friend, the metal marine head is from the iron warriors box and the jackal head is from scribor.
My bits box scares me sometimes....

I attempted a freehand banner once for my Word Bearers..... It was an Epic Fail.....

Think I will be sticking to Icons, lol. At least for now. But If I had something Impressive I'd share it, definitely.

"that they might turn their gaze our way and gift us with the boon of pain, to turn the galaxy red with blood, and feed the hunger of the gods." ~excerpt from the three hundred and forty-first Book of the Epistles of Lorgar
"We're all Mad here......"
My Word Bearers XXXIVth Host Gallery
My Space Wolves Bran Redmaw's Company Gallery

I don't have any banners, and its pretty much for the same reason I don't like guys in power armor wearing bathrobes, or excess parchment tacked on with wax, or even trophy racks. I got a couple of the little backpack banners prepped for whenever the Gavdex+ comes out so I can figure out what's worth a damn and what's not, how it fits into how I want to build my army (for example, Nurgle Marks and Plague marines are pretty great now-but I really really hate Nurgle and the Death Guard so I don't have anything Nurgle marked in my army and probably never will).

I probably won't freehand anything, just glue on the vehicle marks and paint them.

If I had to pick a warband banner it'd be based off the Nightingale symbol from Skyrim: http://www.uesp.net/...im:Nightingales

With the circle above being painted in such a manner to be the eye of horus to show Black Legion affiliation. But I don't like doing free hand work, it usually doesn't end well so meh.

I only have one banner in my army (I count my Champions as carrying the IoCG), but is still somewhat of an eternal PIP. I'm just not all that good at freehand this small. I'm ok at freehand if the scale is a bit bigger (my avatar is from a painting I made, and sold!), but I'm far away from mastering the small scale.

I dunno, I just think it's so hard to make smooth blends and stuff, it all just looks cartoony.

Why don't you design your banner at A4 size, then photocopy it smaller, then?


There is no knowledge
that is not power.
Power corrupts.
Ignorance is Innocence.

Tzeentch: Change you can believe in.

Why don't you design your banner at A4 size, then photocopy it smaller, then?

Not a bad idea, however I don't have access to a good printer at the moment. I might not have any income all winter, so will have to survive on what money I have managed to save up during the summers (I'm on my last year of getting my masters in physics). Also, I think photocopying feels a bit like cheating. Somehow it would feel better to sculpt icons rather than print banners, even if I painted them myself.

Each of my squads has a banner with its own heraldry. Or will when this is all done. These are the WIP models: 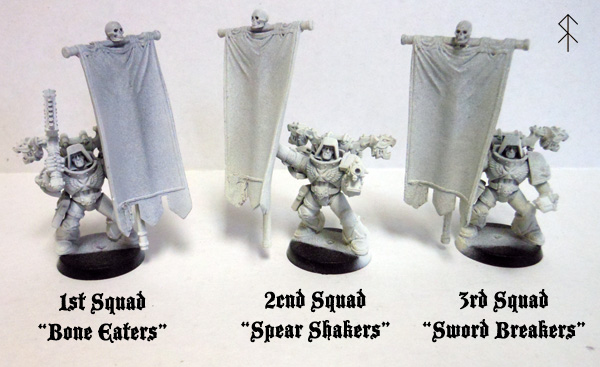 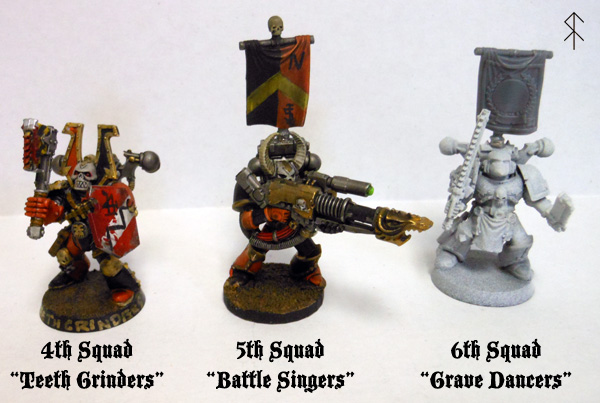 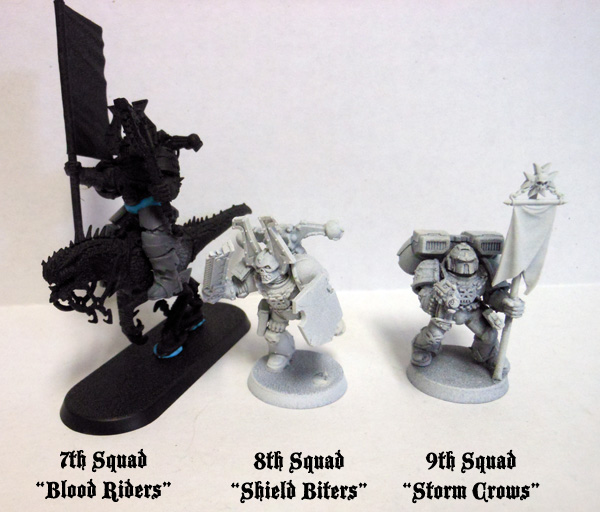 And this is the drawing I did today for the designs: 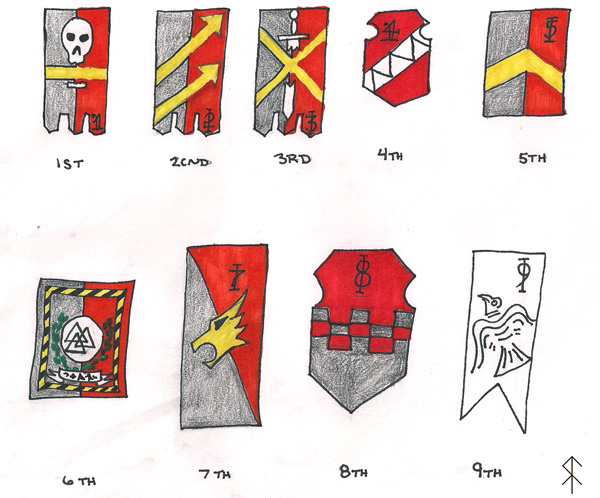 My warband colors are orange and black with gold trim, so I tried to reflect that as much as possible in the designs. The exceptions are 4th and 8th squads who are Berserkers (so they get red), and the 9th squad Raptors (who are largely intended as a personal retinue for my Sorcerer).

I have a 10th squad, but am undecided as to whether or not they will have a banner or not.