81 replies to this topic 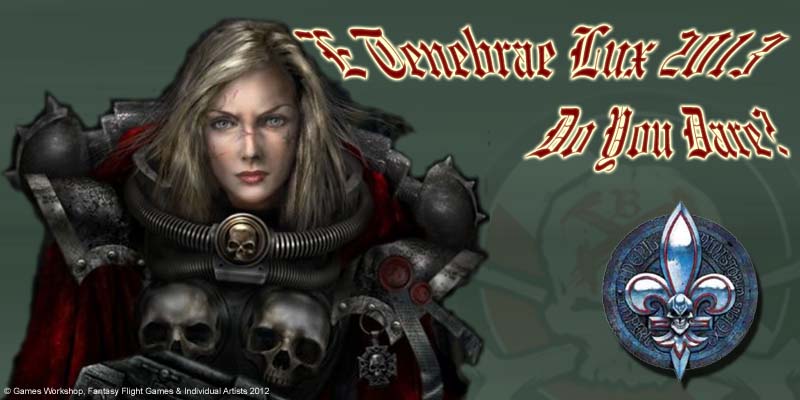 You fought a holy war last year and, along with the Grey Knights, you made a heroic stand that made a strong impression accross the Galaxy! But your numbers were few... Now, apart from your long lasting allies, further reinforcements have arrived. The countless numbers of the Imperial Guard and the full might of the Mechanicum will stand beside you. Now mankind will surely triumph!

Last year the Ordos (GK and SoBs) made an amazing effort. With an 82% completion rate you gathered a respectable 5.7k pts! However the lack of numbers showed and in the end you could not threaten the more numerous rivals. But fear not! This year the Mechanicum and the Imperial Guard will join forces with you and substantially improve the odds to become all of you jointly Primus Inter Pares!

HERETICS CRAVE FOR THE CLEANSING FIRE OF ABSOLUTION. THEY NEED NOT FEAR, FOR WE SHALL DELIVER.

Well, this is the return of the ETL. There is some streamlining of the rules compared to last year so please read them carefully, veterans and new entrants alike. The rules can be found here:

This thread is the “Chapter House” for this event. All vows of this sub-forum should be posted in this very thread in order to be valid. This is also the place to declare vow completions and/or vow renewals. Finally posting your WIP thread links in your “completion” post will be tremendously helpful! This is a big event guys, so making life easier for me, will help avoid confusion and backs ‘n forths…

You can also use this thread to gauge the progress of your forum (last year’s veterans know I’ll update often) and compare it with other forums in their respective threads. It will also be a good place to talk to each other as how to go about it, and organize your forum effort.

If you want to refresh your memory of what happened last year, see the ETL I - Final report

I’ll be glad to answer any questions as we go along and I will keep track of all forums’ efforts. So I’m the person you need to talk to for anything regarding the procedures of this competition but your forum Moderators still have full control of the Meltas and they will gladly use all of them given half a chance... So be aware of that!

ALL WHO MAKE A VOW AND ARE LISTED BELOW HAVE EARNED THE RIGHT TO WEAR THE OATH OF MOMENT :

Well, I should have at least 10 Battle Sisters to paint by June, so I'll probably pledge those initially, with a Canoness if I can get one

I Midnight Angel answer the call of E TENEBRAE LUX and vow to complete 3 battle sisterrs squads (at 10 strong, 2 flamers, 2 storm bolters, heavy flamer and multimelta, plus sister superiors), 1 retributor squad(6 strong, 4 heavy bolters and sis superior), 1 dominion squad (6 strong, 2 meltaguns, one sisters superior with combi melta), and 2 immolators (one with heavy bolters, one with multi meltas) from Codex Sisters of Battle (white dwarf) of total value 778 points on or before August 15th. Success will bring eternal glory to The Order of the Scourged Heart and fellow battle sisters everywhere and failure will doom me to bear the Badge of Shame until the year-end

I will put my updates in my Sisters Blog thread, so i wont have to create a seperate thread on the forums posting the same updates.   Plan to finish the exorcist and canoness too, but they only need the last bit of weathering, detailing on the tank, and base work done for the canoness.

Ludovic, if you want to get started, you can get the standard Rhinos relatively cheap just about anywhere.  And if I read the rules correctly, if you are going to build your army with allies, you can paint them and have them "count as" a Battle Sister squad for the compitition.  So you could paint 2 Vendettas and have them taking the place of two Penitent Engines.

Fibonacci: Thanks for the suggestions (I do appreciate them), but I won't have to wait too long for the Battle Sister models if I win the bids. Also, I'd much prefer getting some Immolators and making the Rhinos more "Sister-like" than just painting up plain old Rhinos. Lastly, I'm going for a pure Sister force (and I don't like Vendettas

Seek not escape from misery in death for He That Is Most Mighty gathers not the Selfish Dead to his side.

I, Furyou Miko, answer the call of E TENEBRAE LUX and vow to complete two Battle Sister squad, two Retributor squads and a Dominions squad from Codex: Sisters of Battle of total value 1036 Points on or before August 15th. Success will bring eternal glory to the Order of the Sacred Tome, and failure will doom me to bear the Badge of Shame until the year-end.

Before [Repressor model not included, as I'll have to finish converting that at a later date. Note also that the Rhinos are in somewhat poor repair and also need fixing up and upgrades re-added. Also missing is a Sister Superior and two flamer-armed Sisters];

Yes, that's right - I am basically vowing to paint my entire Sisters army, minus the majority of the vehicles. Many of the models are undercoated and have the robes blocked on. Some of them even have random bronze details applied. None of them are in a state I would call more than 'basic' or 'just started'.

My vow is huge this year - last year I painted three effectively scratchbuilt Chaos Sorcerers, and probably caused a large part of Captain Semper's grief. ^^; So, this year I'm going entirely the other way. I even plan to set up a WiP thread once I actually start work! Shocking, I know.

The vow breaks down thusly;


There is no knowledge
that is not power.
Power corrupts.
Ignorance is Innocence.

Tzeentch: Change you can believe in.

PLEASE NOTE: I'VE MADE A TYPO IN THE VOW (CORRECTED NOW). THE ETL ENDS ON AUGUST 15TH - PLEASE AMEND YOUR VOWS ACCORDINGLY!

I Nikolai180393 answer the call of E TENEBRAE LUX and vow to complete one Seraphim squad from Codex Sisters of Battle of total value 125pts on or before August 15th. Success will bring eternal glory to The Order of the Crimson Lagoon and failure will doom me to bear the Badge of Shame until the year-end.


I am starting with a small vow first as I want to make sure I am happy with what I am doing. I have only recently bought my current Sister army so I have quite a lot of points to paint up, around 1,200pts.

The squad is meant to have two Seraphim with hand flamers, but I only have one model with them, so I think I can’t add that to the points. I will be getting one sometime soon, but yeah.

If I read this all right, I need to make a WIP thread to accompany my vow, so I will do that later today.

One Penitent engine is 85pts by the way. I hope I am allowed to say that.

Now I feel bad, because for a bit I was considering taking a break from my CSM. But no, those squads have actually been without colour longer, so...

Glad to see this many vows here. Good luck!!

We will need it looking at the other forums.

I, Phoenix the War Father, answer the call of E TENEBRAE LUX and vow to complete a Squad of Battle Sisters, Retributor, Dominion, Seraphim, and Repentia. Along with a Agis Defense Line w/ Quad Gun, Uriah Jacobus (with Battle Conclave), Canoness, 1 Priest, and Saint Celestine herself from Codex: Sisters of Battle: total value of 1400 Points on or before August 15th. Success will bring eternal glory to the Witch Hunters of old, and failure will doom me to bear the Badge of Shame until the year-end.

The below link to my photobucket shows a close up pic each squad.

Well nikolai180393, I'm the only one in the Grey Knights that has a solid pledge as of now. I hope I don't have to carry the whole chapter. One other has said they would have their vow up soon. So maybe...........

I'll have to see what I could do for the team. I just can't skipp ETL but my current projects are DA and Khorne marines. DA are the new thing so they don't need my help, and how can I go all traitor on you guys. Besides those projects are for 2.ed so I don't know how legal units I could make of them.
I think I could throw in an IC at least.

Order of the shining dawn blog

However we are strongly encouraged to make them fit the army due to their rather generic nature.

Well nikolai180393, I'm the only one in the Grey Knights that has a solid pledge as of now. I hope I don't have to carry the whole chapter. One other has said they would have their vow up soon. So maybe...........

I hope it does change, as of yet it is only really the Sisters and the Imperial Guard who are contributing, which is a shame. Great to see you doing your part though

After a thought and a journey through the valley of bits and over the mountain of unassembled boxes here it goes:

I Hanska answer the call of E TENEBRAE LUX and vow to complete Uriah Jacobus from Codex: Sisters of Battle(WD) of total value of 90pts on or before August 15th. Success will bring eternal glory to the Ministorum and failure will doom me to bear the Badge of Shame until the year-end.

Order of the shining dawn blog

Good to see Hanska back! The vets return to the call of the ETL!

I Enhrjr answer the call of E TENEBRAE LUX and
vow to complete Uriah Jacobus, Celestian Squad, and Seraphim Squad from Codex: Sisters of Battle (WD) of total value 325 points (90, 115, and 120 points respectively) on or before August 15th.
Success will bring eternal glory to The Order of the Crimson Shield  and failure will doom me to bear the
Badge of Shame until the year-end

Sisters of Battle Order of the Crimson Shield for Starting photos