A tall order. I look forward to seeing the Knight painted up (as well as the chibi). Are you going with your traditional red, or trying something different?

That knight titan puts mine to shame! I've been a fan of your conversions for a while.That is amazeballs!

I've been out a while doing some Renos around the house, your work is awesome as all ways, only one flaw... get some paint on em haha, keep up the good work

Thanks for the feedback, guys! I am not actually perfectly sure whether or not I'll be able to finish that Chaos Knight, but I'll give it my all! For chaos!

He will be painted in - fairly standard - red and brass, both because it factors into his backstory as an honorary member of the legion and because I want to own a huge model like that in WE colours

As for the Chibi-Knight, I might pledge him as an out of competetion vow, I guess? Nothing's making me paint another five Terminators right now, sorry

Oh, and skrundle, mate, great to see you around here again! Hurry up and build some amazing new daemon engines, you hear?

So, what else is new? My experiments with the Leadbelcher spray this morning came out much, much better than I had anticipated, and I have been rather motivated ever since. That stuff is great! Fantastic coverage, goes on like a dream etc. My only gripe is that it's very bright -- but nothing that several passes of wash wouldn't solve, right?

So, anyway, I have been painting all morning, since it's my day off, and I already have a first ETL-related update for you. Take a look at the Warpsmith taking shape: 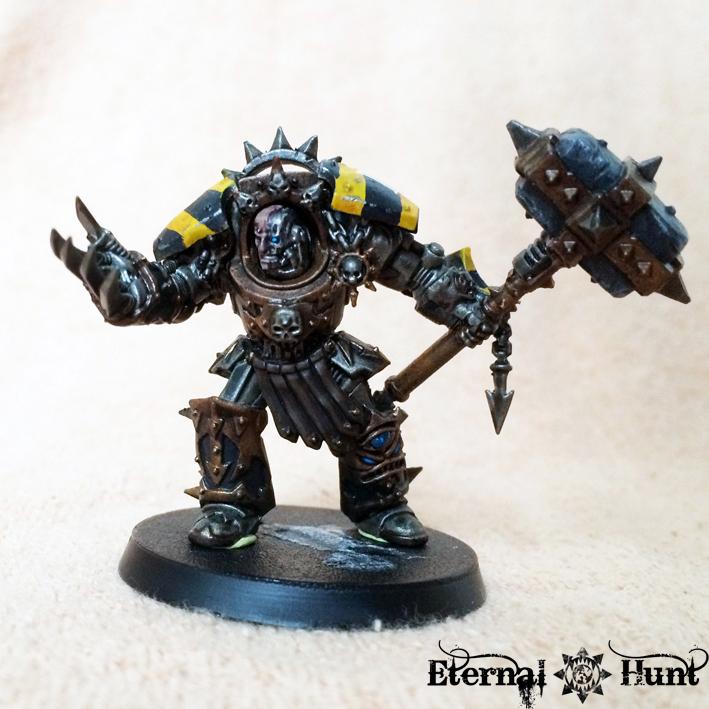 He's already pretty far along, actually, although he's missing quite a few touchups, as well as his cape and his base. Anyway, it shouldn't surprise you that I am pretty pleased with myself right now

That was quick given how awesome that lord looks!

The Warsmith is already starting to look really cool! I can't wait to see it finished!

However, I was wondering where you got the head of his hammer from. I thought you said it came from the WHFB ogres, but I couldn't find it in GW's online shop. Did I remember that wrong?

@ Rayray: I think I was really carried along by the success with the Leadbelcher spray on this model: I couldn't have imagined beforehand how well it works, and seeing the model in silver makes it somehow seem more complete than your average, black undercoat. Then I did the face next, and the model seemed even more complete -- I was probably tricking myself a bit there, but it seems to have worked just fine

The hazard stripes and yellow areas did take quite some time, though...

@ Kythnos: Aw, no: I meant the Dragon Ogres, mate: different kit and different army altogether (Beasts of Chaos or Warriors of Chaos, I believe). Although the first version of the model did have an ogre hammer (from the Ironbreaker kit, IIRC).

Cheers mate, ill see what I can do haha

Did you ever get the 'cast a greenstuff hand, make bloody handprints' thing working? I'm pretty sure it was you that tried it anyway.

@ Kythnos: Aw, no: I meant the Dragon Ogres, mate: different kit and different army altogether (Beasts of Chaos or Warriors of Chaos, I believe). Although the first version of the model did have an ogre hammer (from the Ironbreaker kit, IIRC).

Ah, that explains it. Thanks a lot! As it's quite a big hammer, do you think it'd work on a Daemon Prince as well? Mine is looking for a fitting weapon.

That warpsmith is fantastic. Upon seeing it i had an immediate urge to shoot it till it was expunged from the Omnissiah's gaze, so you definitely hit the perfect chord!

I'm eagerly looking forward to seeing some paint on that superb knight! And if you get that handprint idea working especially so.

@ Dragonlover: I still have that "handprint stamp" and will definitely be using it on the Chaos Knight, yes. There'll be lots and lots of painting to do until I get to that stage, though...

@ Kythnos: Hmm, I took a look at my GW daemon prince just now, and the hammer would make for a pretty small, one-handed weapon at most. Personally speaking, I'd go for something quite a bit bigger on a DP.

And here's the next, Warpsmith related update: While I am waiting for several details (and the decals) on the Warpsmith to dry, I have spent the afternoon painting the base. Since this will probably be a one-off model, I have taken the liberty of making the base as trench-warefare-ish as I could (taking quite a few cues from EdT's fantastic tutorial, btw). Anyway, here's the finished base: 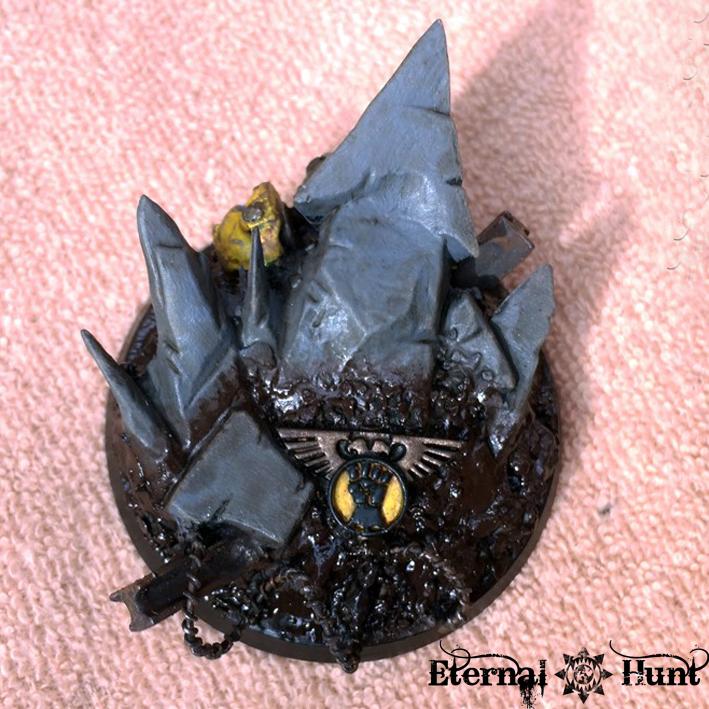 As you can see, the base comes complete with a broken Imperial Fist icon, courtesy of a bitz donation by fellow hobbyist Sagal.

I also used quite a bit of gloss varnish to make the mud look suitably wet and...well, muddy: 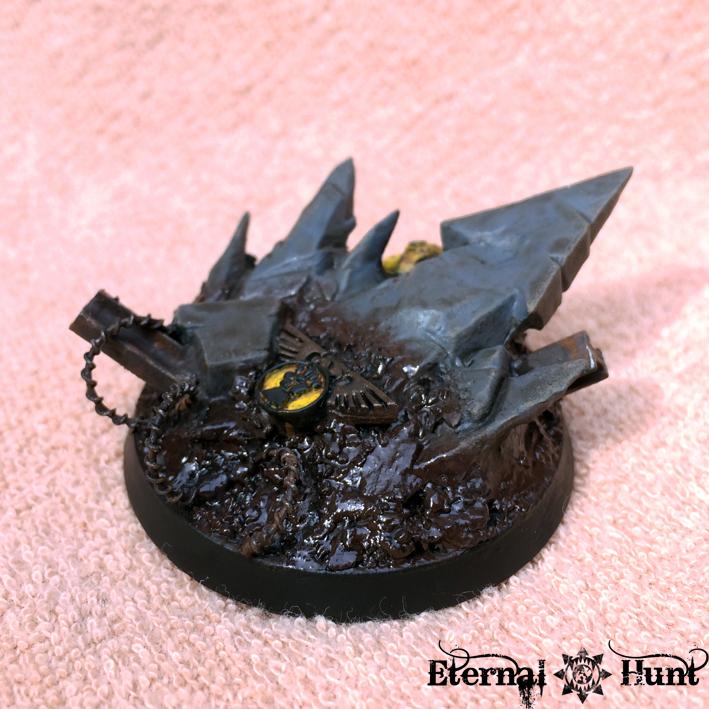 And finally, I am rather happy with that IF helmet: 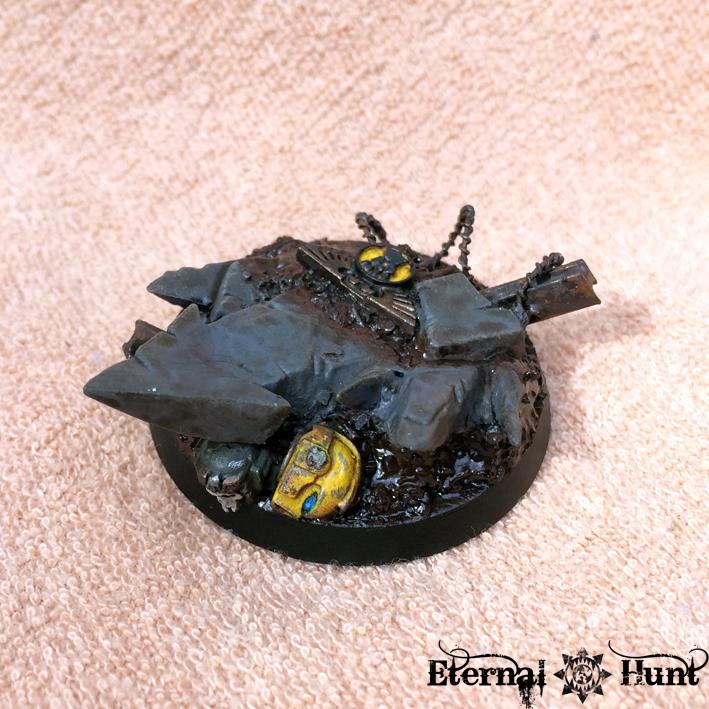 I am pretty tired of painting right now, though, so don't expect any news until tomorrow at the earliest. Even the biggest spell of inspiration has to wear off in the end...

That Warpsmith looks really promising, with that base and all details finished he's going to be a mighty brutal looking guy.

The 33rd Company - The Mongrels of the Eight

'Where many were, how few remain'

@ Vladvar: Your own Iron Warriors were actually a huge inspiration for this guy, along with InsanePsychopath's army. Glad to finally be able to put all those stolen IW ideas to use on an actual model!

Nice, KSci! I am very tempted to buy that Leadbelcher spray myself now... That paint job is looking really good so far. you really have a knack for IW! Base looks awesome.

@  Auggie: Cheers, mate! To be honest, I couldn't be any happier with the Leadbelcher spray (except that it could be a bit darker): seems like a very sound product so far, and certainly a godsend to Iron Warriors players

Speaking of which, here's the first part of my first vow completed. I give you Warsmith Greimolt Sturm of the Iron Warriors: 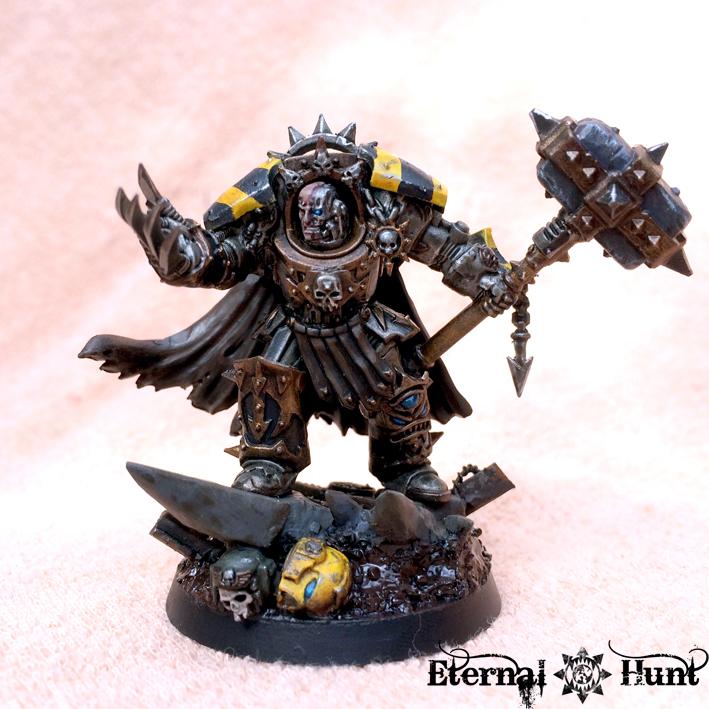 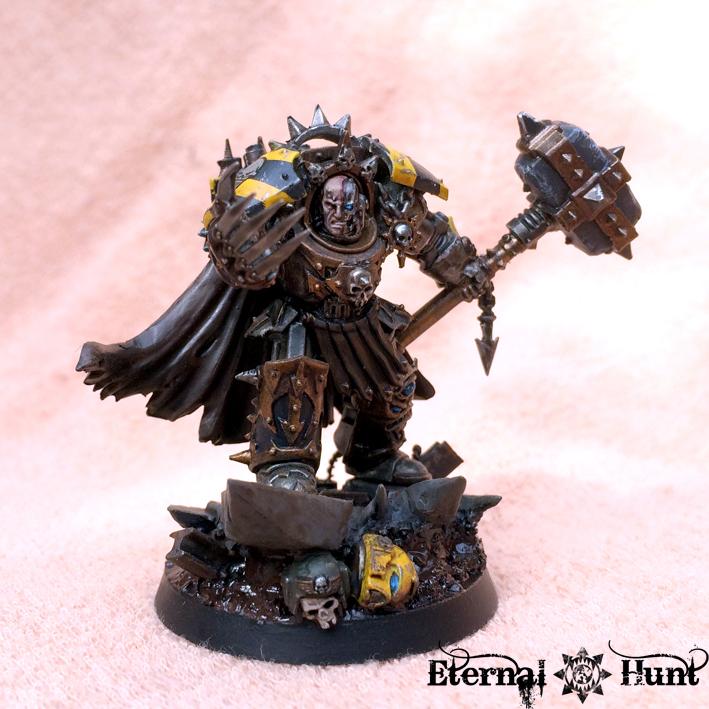 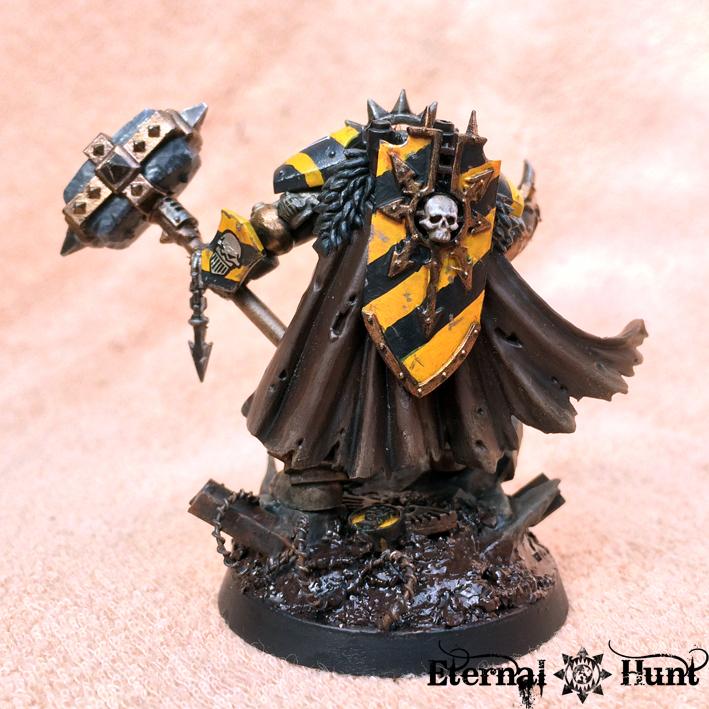 I am really very happy with the model, although you might notice that the chevron pattern seems slightly different across the two pauldrons -- that's just me being too dense to realise that I should have inverted it. Oh well...

I did add a little additional flourish to the shoulder pads, though, in the shape of two decals. One of them shows the legion badge 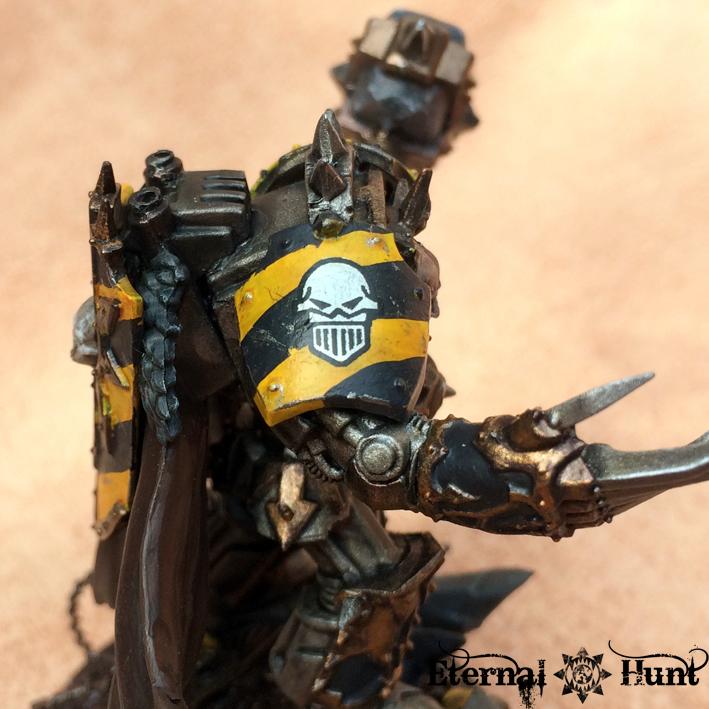 I actually used on of the 90s decals for this, as I like them far better than their more modern counterpart.

The other shoulder pad received a Roman numeral "IV", for obvious reasons 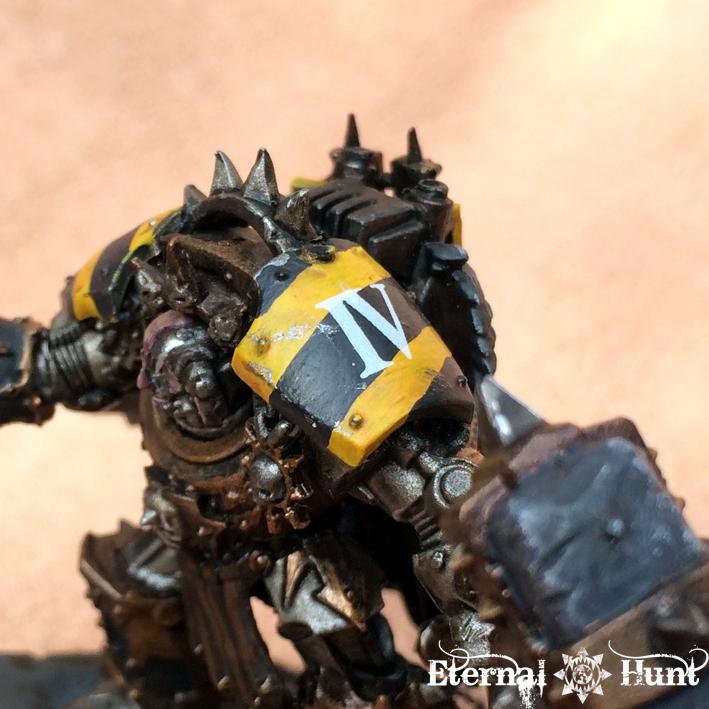 So yeah, that's one down, two to go. Unfortunately, one of the two will be that huge Chaos Knight. But after my experiences with this model, I do at least have a plan for the Knight's metallic sections now 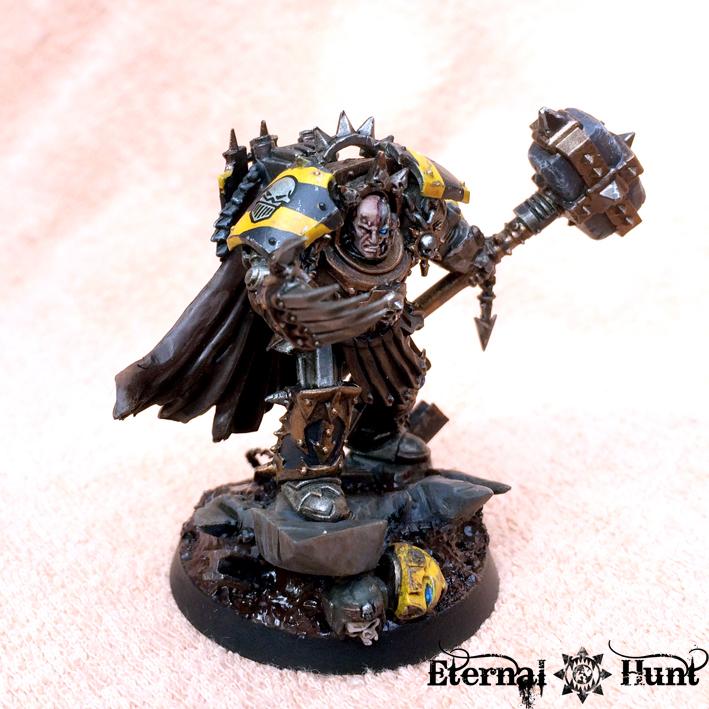 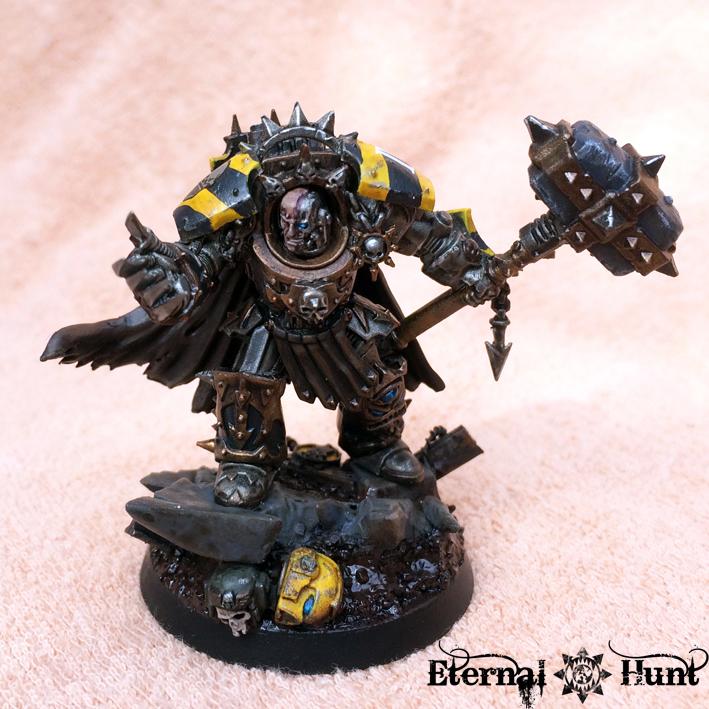 Nice job KS, and I think you've swung me around to completing my own IW for the ETL. I'm sure Khorne will be satisfied with a small vow towards the end.....

Haha, cheers mate! I am honoured that I inspired you to paint something for the ETL -- don't forget about the June deadline, though: You'll have to make your first vow before June 1st, so what about a small vow towards the beginning instead...?

I know it's just a small part, and the rest of the model looks awesome don't get me wrong, but that Imperial Fist helm is *spot on*

Cheers, Flint! It is, though, isn't it? I really painted it as a throwaway detail, and now I am almost annoyed by how well it turned out

Well that came up even better than i expected. Those last steps really pull it all together. Great stuff indeed!

Cheers, Battybattybats! That is very nice of you to say!

He looks really awesome, Kraut. I wish you would make some more IW, because yours look epic.

@ Auggie: Huh, tell me about it -- I am really much happier with the finished model than I had expected beforehand, which is why I now want to build more Iron Warriors, even though I have zero use for them and don't want to get sidetracked. What I really hate about one-off projects is how they never seem to stay one-off. At least for me

Anyway, I indulged myself and built the coolest, most badass IW champ I could come up with: 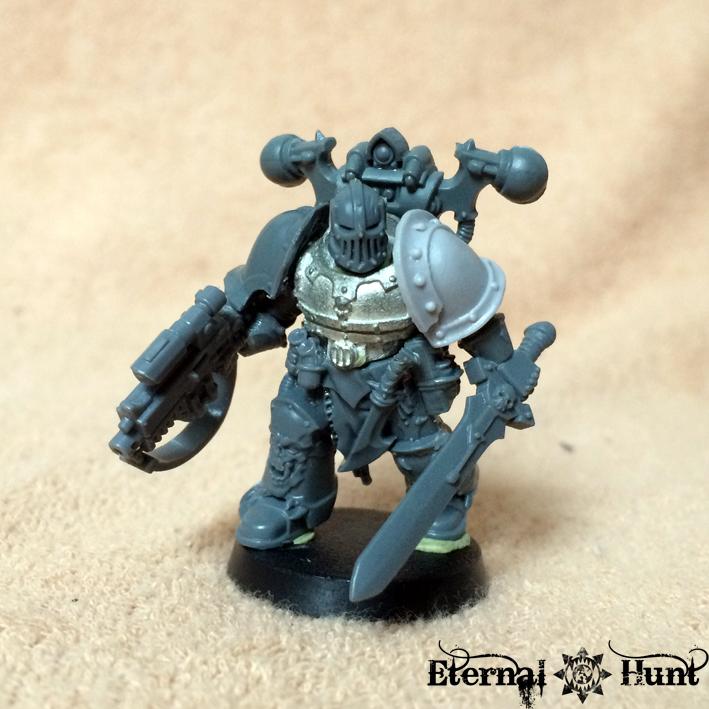 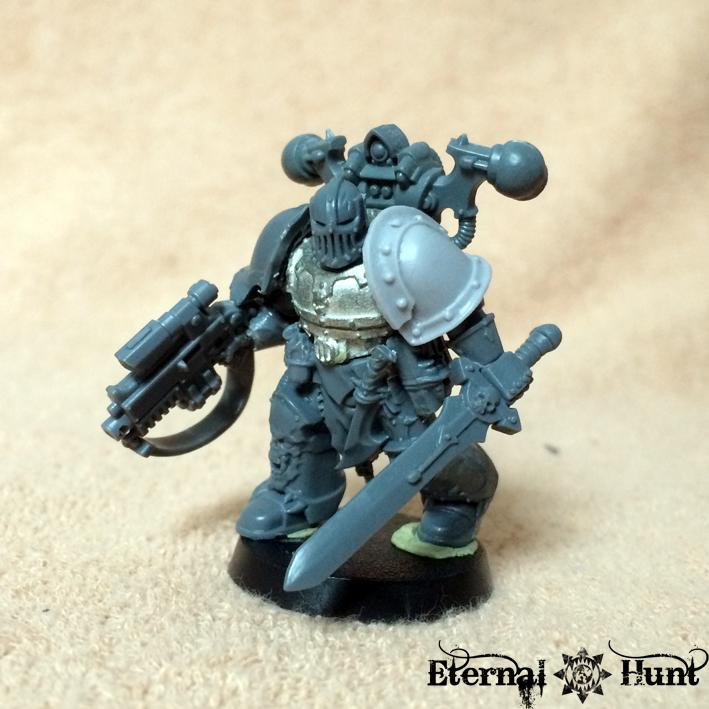 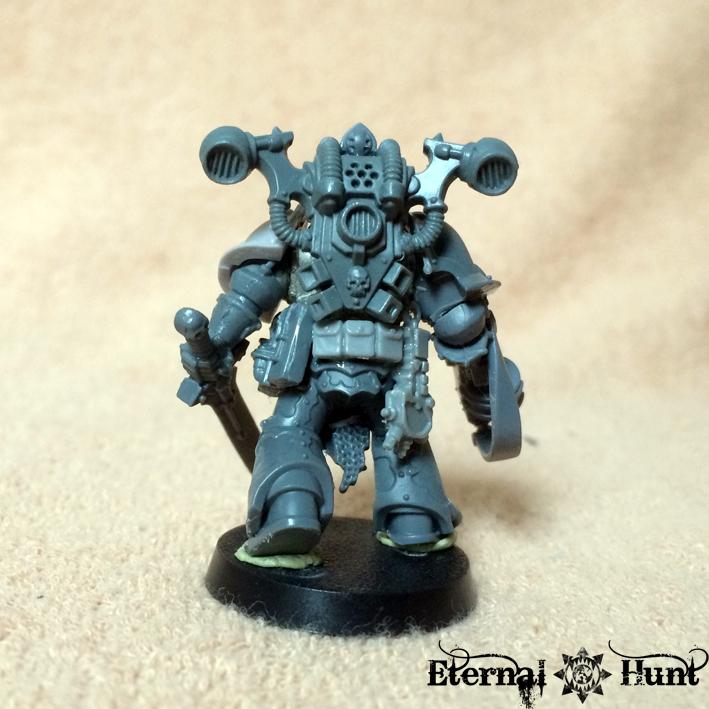 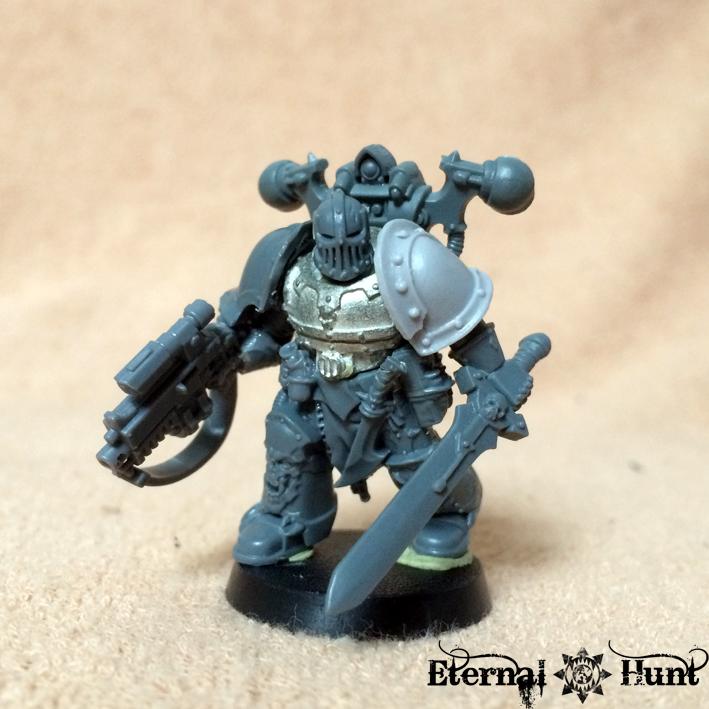 As you can see, I have him quite a bit of wargear, because that creates the workmanlike look I think is so cool about the Iron Warriors.

Anyway, let me know what you think!

4 user(s) are reading this topic