"……by my hands shall the false Emperor fall"

760 replies to this topic

Had a cheeky 1k today at my local GW - Some of my Bro’s 1k Sons The Warmaster turning Ahriman into paste- I did lose though not by much in the end!! Abaddon chasing down that mind bullet firin’ witch made my day

And yes I did run Abaddon and 10 Terminators in a 1k list and he did run Ahriman and a Fire Raptor, fun times

Congratulations on your win!

Congratulations on your win!

Unfortunately it wasn’t a win, had mucho fun however and that is what counts! My Deredeo performed quite well in fairness, and Abaddon is just a boss. It wasn’t a particularly balanced list

You both had fantastic armies! Love what you did to the deredo, and I love the battle damage on the fire raptor!

Two very nice looking forces on the field there.

Thanks for the kind words guys

My bro has about 4 or 5 armies of mostly Chaos Legions but rarely posts them (such a travesty!), with his 1k Sons/Tzeentch Daemons his current project.

Next up for me will be this guy, my second BSF marine whom I have tried to make look different to the first dude - Finished the next Legionnaire to the cause - Just taken delivery of my Shadowspear Marines *deep breath* I cannot wait to get started. My Black Harbingers are actually getting some proper Chaos Marines.

Great job on the Blackstone Fortress Marines, and it's also always fantastic to see your Black Legion out and about! Actually, I've found myself thinking of your army more than once when seeing the recent new CSM kits, as you have managed to achieve much of the same look with your conversions and paintjob (the new Terminators actually look a bit as though they've been inspired by your models). Looking forward to seeing what you do with all of the new stuff!

Many thanks guys, I appreciate the comments

Great job on the Blackstone Fortress Marines, and it's also always fantastic to see your Black Legion out and about! Actually, I've found myself thinking of your army more than once when seeing the recent new CSM kits, as you have managed to achieve much of the same look with your conversions and paintjob (the new Terminators actually look a bit as though they've been inspired by your models). Looking forward to seeing what you do with all of the new stuff!

I am quite pleased how my stuff has a similar look to the new stuff. It is something I worked hard at pre-empting. Thanks for the kind comment on the Terminators! With luck, the new ones won’t dwarf the old ones as I do plan on a set or two, though I won’t if the size differs tooooo much (mine won’t be retiring you see

) As for the new CSM it is only the beginning but here is where I am at so far, nothing special just yet - Note the guy second from right is awaiting a pointy hand which I thought I had, but now waiting on eBay. His Bolter also awaiting some GS work. I also came home from work to these bad boys - These are for use as the new Reaper Chaincannon. I always have a soft spot for any type of minigun, so planned on a full squad of Havocs wielding them even before the stats came out. I won’t be using them straight out the box though, I will be converting them with Heavy Bolters to keeping them all chaos-y. I am also planning on another (converted) squad of Havocs with Autocannons using left over Shadowspear marines. The close combat bro’s should lend themselves well to conversions with their open poses

I love how seamlessly your guys fit the new aesthetic. Kudos to you for the gift of foresight

Looking forward to seeing what you do with the rotor cannons and whatever else you have planned bud.

I’m currently adding raptors claws to the unit of Havocs I built a while back using the Devastators kit to show their stabilising claws. Really can’t wait to get my hands on the new book.

It was Tzeentch that gave me the foresight over the look, he also told me about the FW Rotorcannons which are now out of stock. Can’t think why.....! It makes a ‘Change’ as it is normally Khorne who I listen too

Yes the Raptor claws are a good call and something I had thought of too - I have loads of them knocking about due to using their legs for normal marines and not having any Raptors or Warp Talons. I do like the look of the new formation so that could change in the future!

”The Legion has no time to polish our armour, we have a galaxy to burn. The shiny, showroom fresh look is for Guilliman’s lackeys” Boom! Another CSM done, really enjoying painting these guys. A Shadowspear marine with minor conversion work because I NEEDZ MOAR BOLTERZ, YO!

Excellent work on the Chaos Space Marine. I also love his comment on Guilliman's sons.

Excellent work on the Chaos Space Marine. I also love his comment on Guilliman's sons.

Cheers Bjorn - I am having fun with these new kits. That comment was actually me on my local GW’s Fabiola group....quoted for the truth mwhahahahaaaa

The black is really well done and worn.

The chipped armour and corroded joints are a nice touch, very appropiate, as your quote suggests.

Thanks guys - my Black is the easiest Black there is; it is just straight Abaddon Black

That is, I don’t highlight marine size models unless they have a very sharp edge, and just apply chipping with a sponge using Leadbelcher and Runefang Silvers, and sometimes Charadon Granite

Chaos Marines don’t actually have a great many edges to edge highlight, so I find at my painting level it looks more ‘black’ without them and less forced. I must admit though, the current ‘eavy metal Black Legion blows me away with there black but it is something I could never accomplish!!

I other news, I got my Havocs today - the kit is absolutely gorgeous - but I have hit a slight snag with my proposed Chaincannon conversion; the FW Rotor Cannons are tiny in comparison - Hmmmmmm......back to the drawing board. I had intended on combining them with Heavy Bolters, but they will look terrible when next to the official model. Being a former Blood Angel player, I have a plentiful supply of Assault Cannons, so I have done a comparison of these (they are actually from the Ravenwing kit) - Love the updates brother! Might I suggest an alternate I'm not sure frater have thought of? Heavy Bolter grip Tau plasma and cylinder weapon. Was kinda going for a mini-gun vibe here... 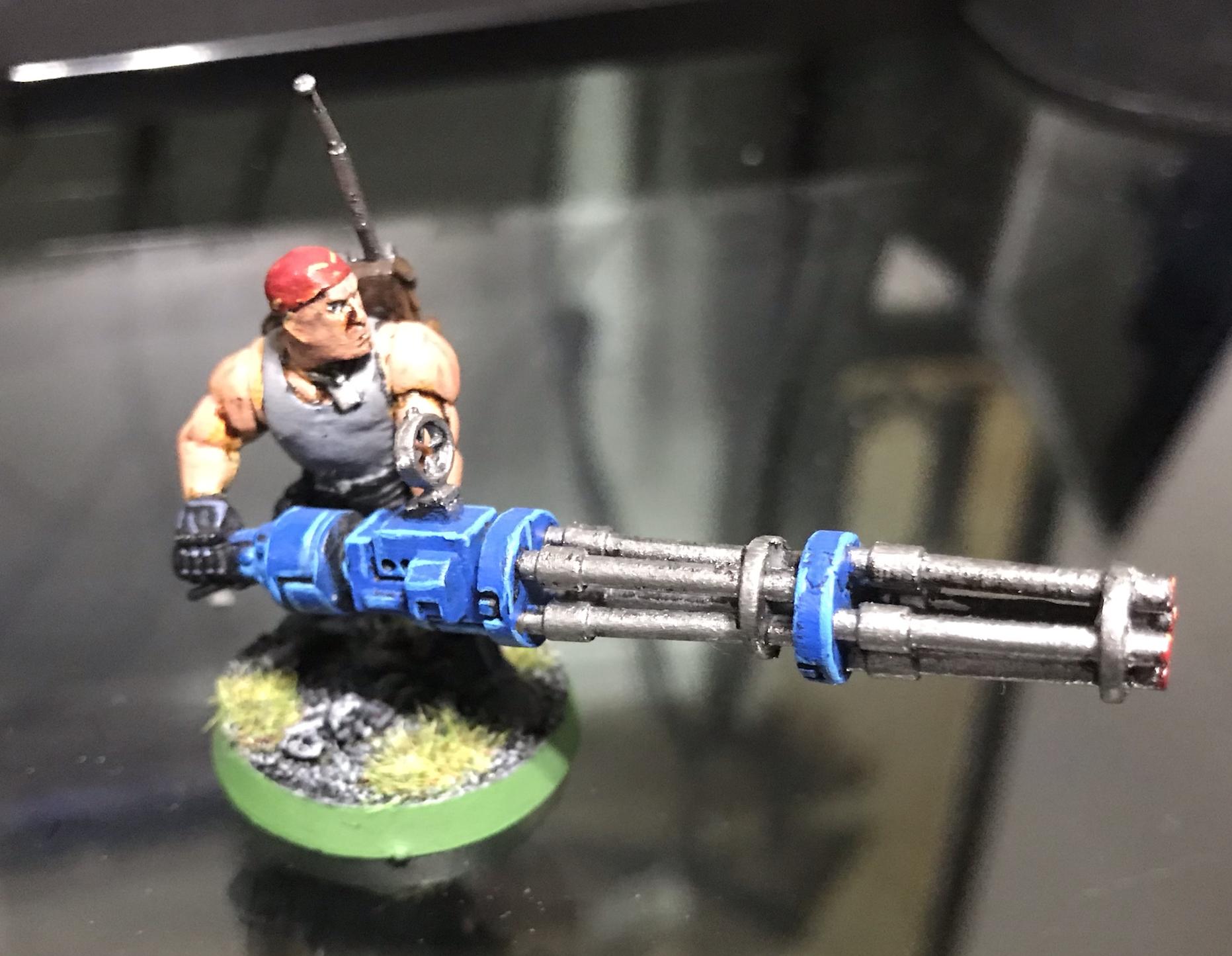 lol it never gets old. I think you would have to weigh the baes down with that bad boy

Plan is, hopefully tonight, make a mold if the tip of the Chainreaper to be attached to the Assault Cannon, which when added to the Heavy Bolter should* look pretty OE. Ol’ Painless is waitin’....

*apart from the bullets ofc!!

Man those Black Legion are looking great! I remember the days of old with your Flesh Eaters. Man, how far we've come

Seems like I long time ago that now! I still love my Flesh Eaters, but they are seriously outdated now with all the new kits and I still haven’t got my head around the Primaris and their fluff. If I did redux them, they would need a decent amount of time and money thrown at them, and that’s not to mention all the rules and keeping up to date with books

In the meantime, the dark works of the Warpsmith have begun - You get where I am going with it, the tip of the barrel will be greenstuff. I have done it in two parts, not sure if it will turn out any good. Let’s just say this is an ‘experiment’

I can highly recommend these barrels from Red Dog Minis. I purchased a bunch for my Aggressors, but they will work just as well for "Chainreaper" barrel ends.

They just released longer barrels if you don't want to muck about with the assault cannon barrels.

If it wasn't for the last minute, nothing would ever get done.

Also tagged with one or more of these keywords: Warmaster, Black Legion, Hounds of Abaddon, Ezekyle ABaddon