106 replies to this topic

Ruslan is a very talented guy and his style perfectly fits for a codex and such.

I'll surely commission him one day for either my Predators Legion or a chapter of mine.

Thanks Kelborn! I completely agree and very reasonably priced so I’d say if you’re on the fence absolutely do it!

I'm currently working on commissioning some new art and spreads for the Storm Sons. In one of the commissions, I had the strong visual of a female tech-priest type character coronating the Khan with reforged war-gear in place of a Techmarine. As there are only two Techmarines left in the Chapter following the destruction of the homeworld, the Iron Sages have risen to prominence:

Nakarene weapons-craft is a tradition long enshrined in the Chapter’s culture, honed to perfection over two millennia. So ingrained is the Way of War to the Khuu Arga, waging battle and the death that follows is considered one of the Noble Pursuits; a venerated form of worship to the Emperor and the Khagan.  Therefore the manufacture, repair and consecration of weapons and armour by the Chapter’s artisans is considered as important an undertaking as destroying enemies of the Imperium by the Astartes themselves.
To this end, entire dynasties of indentured armourer-artisans have spent untold generations in the pursuit of their material craft, perfecting the creation and maintenance of the Storm Sons’ extensive armoury; each artefact a living relic of annihilation. From this tradition of servitude, a strict social hierarchy has evolved to a point where these weapon smiths command a religious status within the byzantine structure of the Khuu Arga, revered for their specialised knowledge and immense skill in weapons-craft.
There are dozens of competing Forge Dynasties dispersed throughout the fleets, or placed on Imperial garrison worlds surrounding the outer Maelstrom, each reputed for their superlative skill in a particular weapon or component; perhaps enjoying patronage from one of the Brotherhoods, or even petitioned to supply arms for other Astartes Chapters. Some dynasties are so large they are feudal empires in their own right, with tens of thousands of skilled armourers whose sole task is to inscribe bolt casings with catechisms of destruction against the warp. Another dynasty may be represented by a lone armourer-artisan of exceptional skill, producing a rare tulwar worthy of a Khan just once a generation.
Every Forge Dynasty is led by a holy Timurszu, or Iron Sage, nominated by the Shah-Khan himself to administer the operational requirements of a never-ending war. The Iron Sages, therefore, hold a rank and reputation equivalent to the Chapter’s few remaining Techmarines. As befitting their status, Iron Sages are impressive figures. Their physical appearance varies greatly; from the imposing techno-barbarian doweager to a many-armed deity of old Terran myth, or even the deceptively simple visage of a holy man concealing a boggling array of subtle augmetation. To construct an aura of mystique requires the skillful cultivation of both operational necessity and individual flair. The Iron Sages also act as a conduit between the Khuu Arga and the Martian Priesthood, enforcing the stringent ritual protocols used in the manufacture, repair and consecration of the Storm Son’s armoury.
In the rare instances when the Forge Dynasties go to war, the Iron Sages take up the mantle of the Chapter’s Techmarines if they themselves cannot be physically present, employing a small army of augmented human warriors and battle-servitors to do their bidding.
Thoughts? I wanted to have a faction that gets me to do some nice conversions of the Adeptus Mechanics range with Necromunda bits allied to the Astartes.
Artwork to follow in 2021!


I have absolutely no idea, perhaps you could suggest something. They are potent but require a large bodyguard, and certainly don’t have the combat prowess of an actual Techmarine. Since the Chapter is under resourced they essentially fill in the gap. I’m leaning towards Tech-Priest Dominus at the moment.

I’m not great on the rules, I assume you can use Mechanicus allies without too much of a problem? 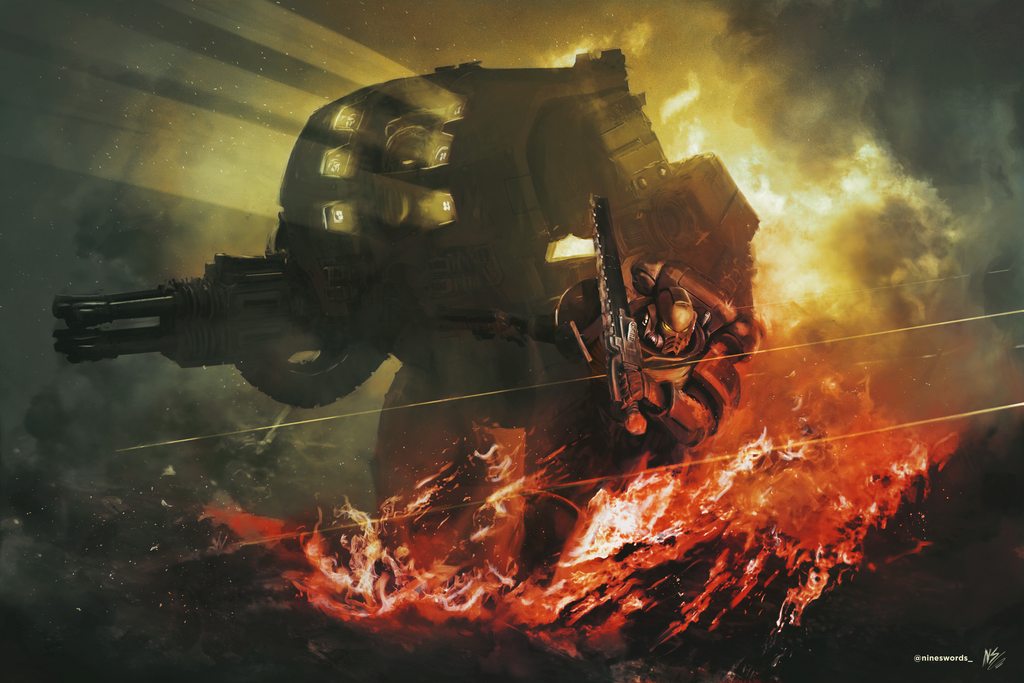 Across a thousand war zones, the Imperium conscripts billions to stem the tide of Chaos vomited from the Maelstrom. Dozens of systems around it are engulfed in warp storms following the catastrophe of the Cadian Gate, and the Imperium fights simply to salvage what is left.

In the coreward systems, the Storm Sons of the Adeptus Astartes sends its Brotherhoods to contain the Entropic Chorus, and deny them valuable resources.

Taciturn and deliberately opaque, it has been long rumoured by the Storm Sons’ allies that a cursed Brotherhood exists within their ranks; an order that fights with brutality without any concern for restraint or civility.

For their part, the Chapter has never formally confirmed the existence of any such force, but when rumours persist, there is often a kernel of truth concealed within. These outcasts are known to the Storm Sons as the sagyar mazan, and they are a much older organisation than most Imperial scholars would ever conjecture. This cursed Brotherhood have existed in the secret histories of the Khagan’s geneline since the Great Heresy, a dark stain on the V Legion’s long roll of honour.

The criteria for conscription into the sagyar mazan varies a great deal; from a grievous infraction of the Chapter’s sacred laws, to self-imposed exile following some personal transgression, and each case is determined by the Stormseers. Those condemned to serve in the sagyar mazan are compelled by the tsusan garag, the Blood Rite, and cannot be revoked in life, their armour scoured of any markings and identifiers. Only death in battle will release the exiled from their curse and honour restored, expunging their transgression.

The kill-teams of the sagyar mazan are deployed where the fighting is at its thickest; where the odds are so heavily stacked against them that most commanders would never entertain the thought of sending their troops into what can be generously described as a suicide mission. It is in these insurmountable odds do the sagyar mazan operate, in order to turn the tide by achieving the impossible, or die trying.

Stellar job, just like before - I love how gnarly that chainsword came out!

Also tagged with one or more of these keywords: White Scars Successor