Regiments of the B&C: Blood and Glory

340 replies to this topic

I, Wulfgar76, of the 75th Karshaki Dragoons do hereby pledge to complete the models posted within by the 29th of March.

The Karshaki Dragoons hail from the agri-world of Karshak located in the Ultima Segmentum near the border of the Ghoul Stars. Most within the Imperium consider this to be a frontier world and a stepping stone to explore deep space beyond the Imperium's established borders. Karshak breeds a hardy people and they have been providing tithes to fight for the Emperor since their world was rejoined with the Imperium over two centuries ago. Although relatively young in the eyes of Terra, the people of Karshak developed a strong martial system as they defended themselves from the numerous xenos factions that have attacked the world throughout its history. The Karshaki employ a combined arms force and this is evident from their structure from the brigade level down to company level. It is not uncommon for a company commander to have infantry, armor and artillery organic to his or her organization. In some instances even air assets are under the direct control of a company level ground force commander.

What follows are a few offerings from a single troop from the 75th Dragoon Regiment. Kilo Troop or "Killer" troop as they are more commonly known are a combined arms organization featuring mechanized infantry, dismounted infantry, artillery and air assets. They are currently led by Captain Jakob Longknife.

Captain Longknife is relatively new to troop command having previously served as the assistant tactical officer on the regimental commander's personal staff. The previous commander was killed during the Pietros V incident fighting against a Necron decurion. Longknife is a veteran soldier but untried in troop command. His superiors and soldiers are eager to see what he can do. (I replaced the original figure with one that I like much more.)

VSGT Lysell is a tough old bastard who has served on the frontier for more than 10 years. He has survived up to this point through a combination of street smarts, ruthlessness, stubborn tenacity and being just plain mean. He is a tough and demanding NCO but looks out for his boys the best he can. He can often be found in the thick of the fighting to inspire his squad by his personal example. He currently leads a veteran mechanized squad as the troop completes refit and prepares to rotate back into active combat rotation once again.

Nice models and background Wulfgar, good to see you pledging for Emperor and regiment

For anyone else - tomorrow is the deadline for your WIP pictures, by 20:00 GMT! Get yours posted by then to continue the crusade to glory or contact a commissar if you'd like to work out special dispensation

Nice models and background Wulfgar, good to see you pledging for Emperor and regiment

For anyone else - tomorrow is the deadline for your WIP pictures, by 20:00 GMT! Get yours posted by then to continue the crusade to glory or contact a commissar if you'd like to work out special dispensation

First WIP shot is up on my original post, though it would appear that Commissrat will need to be a little patient as their loaned Tech Priest is clearly inept at image recovery.

Cool, he looks good so can only look better once painted!

I hope to get a bit of painting done this weekend but I'll have to see how much time I can steal, hopefully enough to warrant an update picture

I, Arkaniss, of the 501st Swaibian Shock Troopers, do hereby vow to complete one Company Command Squad Plasmagunner from Codex: Astra Militarum Imperial Guard for the Regiments of the B&C: Blood and Glory challenge by 29th March for the honour of the Emperor and B&C.

Just the WIP to begin with, I shall start work on painting him and creating his story soon!

I will need a special dispensation, I can't upload the base model. The lap top is going into the shop.

I, Toxichobbit, of the Cadian 61st do hereby pledge to complete one Colonel for Blood and Glory and one Trooper for One For All by the 29th of March.

Colonel Stratton for Blood and Glory (who needs his sword straightening)

Corporal Wade for One For All.

I Mandaloriano, vow to complete Major Tivadar Andris of the 1st Company from XV° Regiment of Ketzok by the 29th March, for Blood and Glory Challenge.

I Mandaloriano also vow to complete Squad Sergeant Jeno, of the 1st Infantry Section, 2nd Platoon, 1st Company. For One For All Challenge.

I, Battle Brother John , vow to complete the following form Codex: Astra Militarum by the 29th of March.

( hopefully my future pictures wont be so big ! )

Squeaking in with a late vow!

I, varchilde, of the Cadian 82nd Special Operations Group, do hereby vow to complete "Master of Ordnance Turing" from Codex: Astra Militarum for the Regiments of the B&C: Blood and Glory Challenge by March 29th.

In addition the Cadian 82nd also vow to complete "Armsman "Banjo" Perkins" from Codex: Astra Militarum for the Regiments of the B&C: One for All Challenge by the same date.

I should go out more often if I return to so many vows!

A plethora of cool models that need painting up, good to see more veterans returning and new recruits signing up for glory

I will need a special dispensation, I can't upload the base model. The lap top is going into the shop.

This is fine walter, get the WIP up as soon as you can - but remember the final deadline for completion can not be negotiated

Now I have to get to work on the rest of his command squad as well as VSGT Lysell and his troopers.

Hopefully this isn't too late! I've been without internet!

My vows for Blood and Glory! Couldn't decide between the Bullgryn and the Tank Commander so I'll do both! (Bullgryn is usually sitting in front of the tank anyway...) 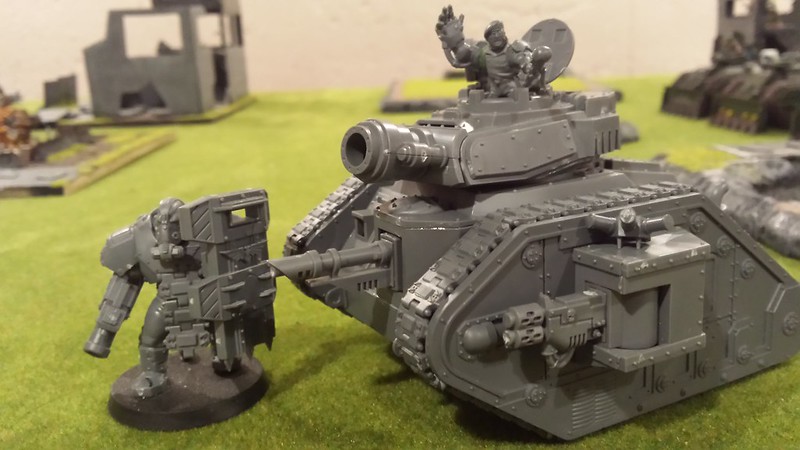 To the darkness I bring fire. To the ignorant I bring faith. Those who welcome these gifts may live, but I will visit naught but death and eternal damnation on those who refuse them.

And after a switch of Tech Priests, the other WIP photograph has been uploaded

Now to actually paint them!

The text covers both the regimental history, and drawing the spotlight on Torvek's role.

High Priest Torvek, is a serious threat to the Imperium, a former Junior Commissar, he was introduced to the worship of Khorne after the 88th purged a Khornate cult. He was charged with analysing the materials captured for intelligence and grew intrigued by the rituals which claimed to help bolster martial confidence.

Over time, he found that that the rituals actually worked, and bolstered his fighting prowess, and those he gradually inducted. The regiment went from strength to strength, becoming tightly disciplined on the field of battle, even if some of the savagry off the battiefield caused some problems. Eventually he came to the attention of the Exec of the Regiment, Major Tobias De'Ath. At first the major was horrified that the regiment had grown such an insidious cancer inside it, but Torvek's persausive manner talked him around, once Torvek appealed to his ego.

Eventually the rebellion in the regiment took full hold, those loyal to Torvek and the Major purged the regiment of those remaining loyal to the Emperor. Once this came to the attention of the Imperium, forces were sent to crush the regiment, and only a handful of platoons were able to flee.

Harried by a squad of Adeptus Astares, who performed hit and run assaults on various transports that were captured by the 88th, the fled into the only place they knew might welcome them, the Eye of Terror. As the penultimate transport fell to the remaining 4 Astares, the High Priest Torvek resorted to a last ditch effort, returning to an ancient tome of battle rites, he summoned a Blood Wolf into the flesh of Major De'Ath's veteran sergeant and unleashed it at the Astares. Stagged by the sudden assault from the daemon, the Astares were driven back, buying the Major time to present a better organised defence.

Unfortunately for the 88th, the Astares recieved reinforcment from trailing ships, and soon on the decks of the transport vessel became red with blood. It looked like it was all over for the 88th, when the battle was joined by a raiding force from the Quintos.

Squad Sergeant Fulk is a brute of a man, one of the first that Torvek inducted into the rites of Khorne and has served loyally as his personal bodyguard ever since. He also serves as the Deacon for the ceremonys, ringing a bronze bell, to summon the faithful to the worship.

Greetings fellow servants of the Emperor! Here are my entries for the glory and splendor of his most August Majesty and deepest holiness the Divine Emperor of the everything.

First a as of yet unnamed Commissar

These models are to be completed by the 29th of March for the Glory of the Emperor and the Honor Grondilmar!

Great stuff, completions and more! From now on no more entrants will be accepted - for all those taking part paint well for the Emperor and do not fail, the commissariat is getting upset that we've yet to reach the hallowed 100% completion so might start enforcing stricter discipline

Just remember, if the Arch Traitors of the Imperium can get themselves organised, then you bunch of loyalist lapdogs should be able to achieve it too!

Any chance of being able to join this late? I fancied joining but seen I missed the cut off

Reyner is too late