27 replies to this topic

Welcome to The 30K Casual Hobby Challenge - Hall of Victors.

This thread is a place to celebrate the work and success of the participants in the 30K Casual Hobby challenge. Here we will post monthly summaries of the challenge, and invite the most productive and respected members of each monthly challenge to post pictures of their work. We’ll also have a look at everybody’s army progress every so often.

Firstly I’ll remind everyone of the rules of the challenge:

To join in you make a hobby pledge for the month, in the relevant month’s thread, and this contributes to either the Loyalist or Traitor cause. There are two competitions:

Loyalists and Traitors compete on completed pledges over the month. The more completed pledges the more points you win. You can make a second pledge only once the first is complete, and in doing so you risk your first pledge. That's right - pledges are all or nothing - complete your vows or live in shame.

Every model you pledge to paint is worth points. Once you finish the model and show us you earn points for your faction. These are always safe, so there is always an incentive to keep painting! The scores are as follows -

Lord of War (including Primarchs)- 10 points;

Swapping pledges – I will accept pledge swaps, as long as they are worth at least the same points. If you have Forge World delivery issues, just let me know and pledges can also be tweaked.

Each month absolute scores are recorded, and the percentage of pledged scores completed.

At the end of the month I'll tally up the points and pledges to see who wins. Fraters are ranked in the following classes:

Oathkeeper – Completed all of their pledged models.

Battle Brother – Completed some of their pledge and contributed to the cause.

Neophyte – Managed some hobby work, but scored no points for their team.

The Missing – A shameful lack of progress!

The oathkeeper with the highest number of points scored for each team will be declared the Emperor’s or Warmaster’s champion, and asked to post pictures of their vow here. Any persistent winners may nominate their favourite vow in their stead, if they are bored of showing off!

At the end of each month all involved members (Neophytes and up) will also vote for their favourite pledges on each team. The two most popular vows will be declared the Warrior’s champions, and post their work here.

Finally – I’d like to use this thread as a place for people to show off their total army progress. So whenever you have a decent army picture, it would be great for people involved in the challenge to post images of all the challenge models they’ve completed in the preceding months, or one of their army as a whole.

So the idea of all of this is to provide a record of our antics, and to provide more inspiration and motivation for our fellow 30K hobbyists in a place that all can see! Right now I’d like to see pictures of the armies and total pledge progress of everyone involved in the challenge so far. I’d also like to invite our previous victors to post some images of their victorious vows. Details of these, along with links to our old threads are below.

Where it all began, thanks to Frostmourne, but without scoring from me.

OK – let’s see some victorious vows, and your army shots!

OK, so I'll start things off. Here are a couple of shots of my Salamanders legion force. Pretty much everything here has been built and painted in the last six months through the challenge. I hope to get the rest of it done by the end of the year, but we'll see. Its been a big help having the challenge for support and encouragement, as well as inspiration, so thank for all your help!

Here is my february vow:

Warmaster's Champion? That is definitely going into my signature

Here is my February vow (I apologise for the quality of the photos).

Here is the group shot of the vow.

Lastly, my version of Autek Mor

Here is an overall shot of my Taghmata force.  Before this challenge started, I had the magos dominus, 2 castellax and a thallax painted.  Now, it's closer to finished than it has been in almost 2 years.

Ok..army shot below...half of it painted thanks to the challenge :-) 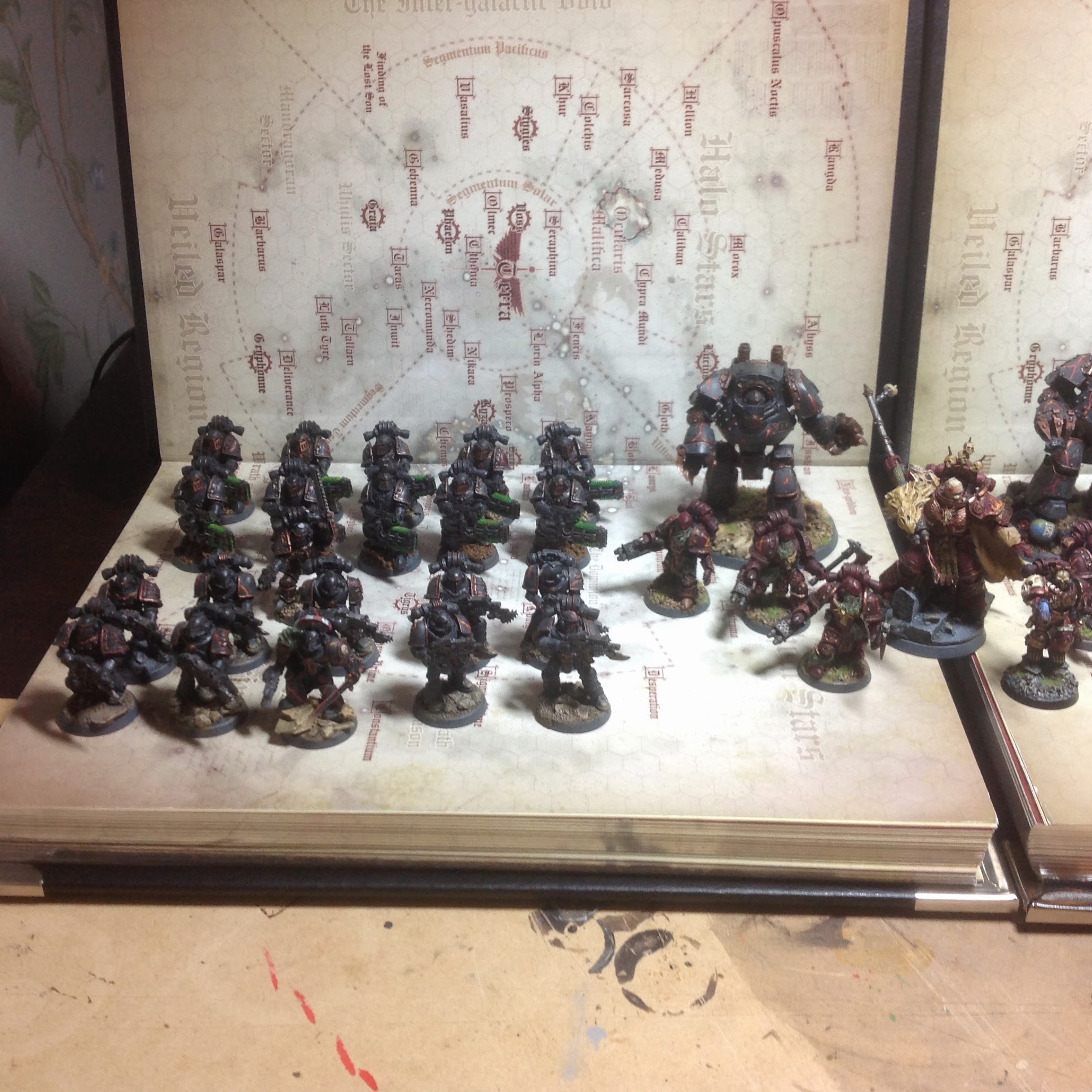 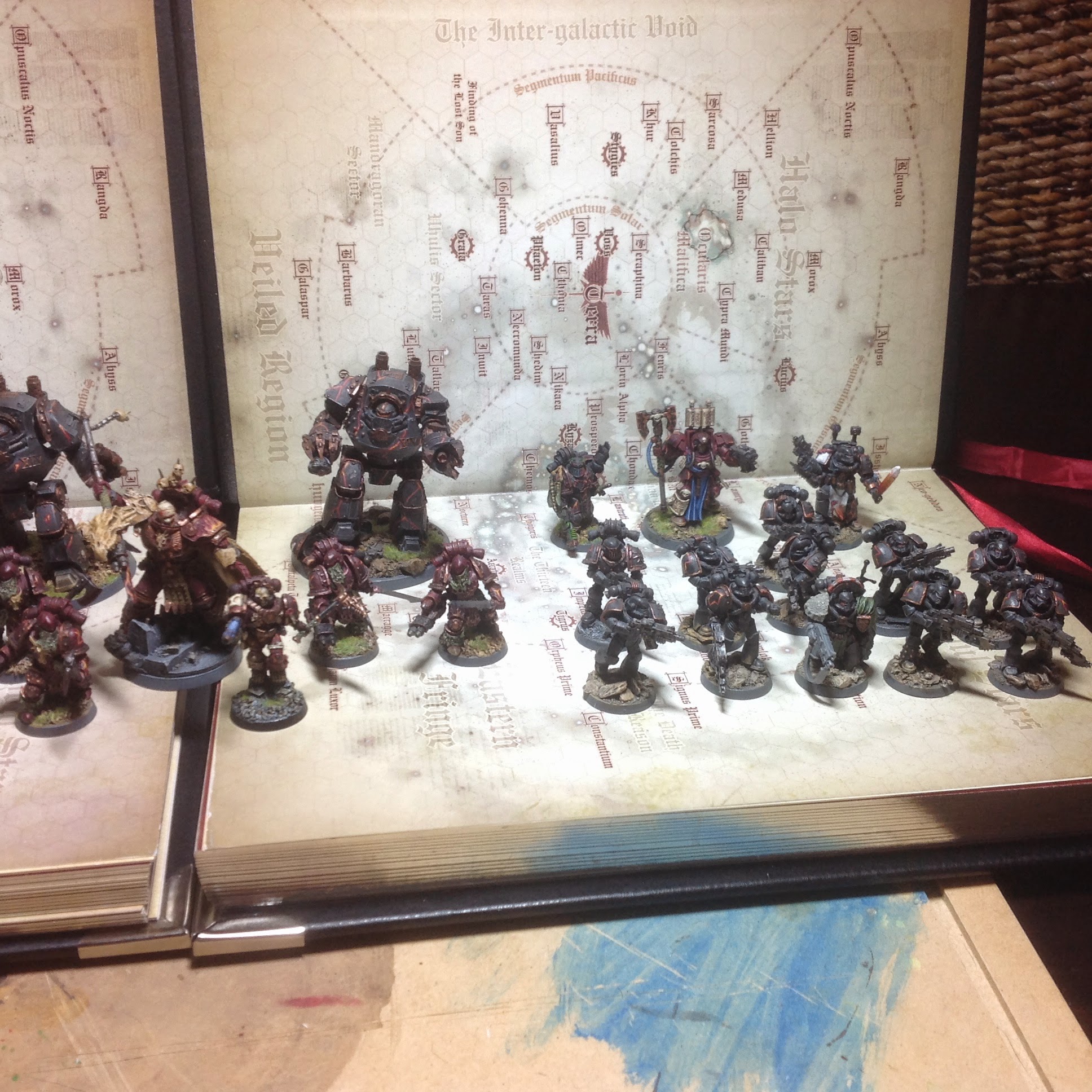 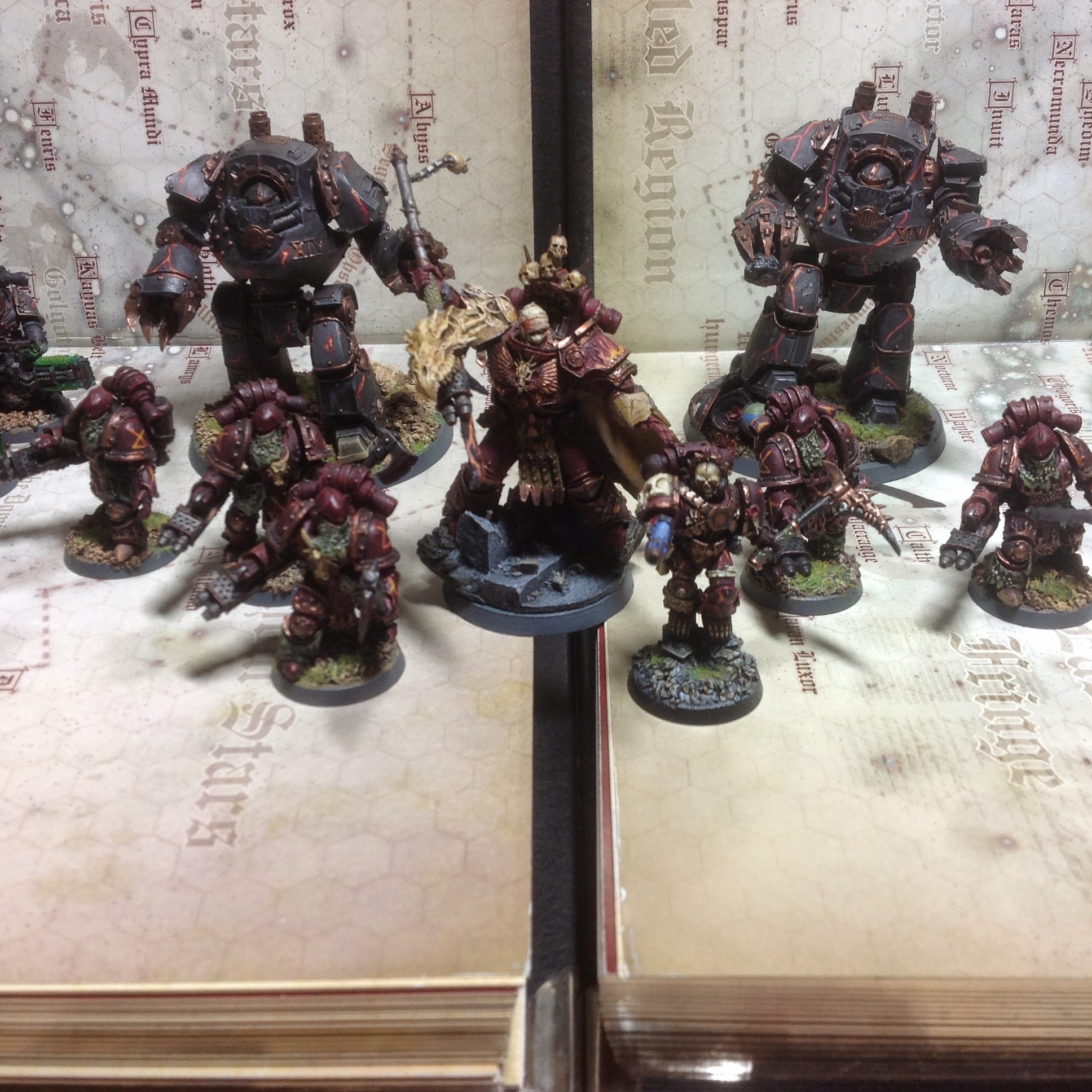 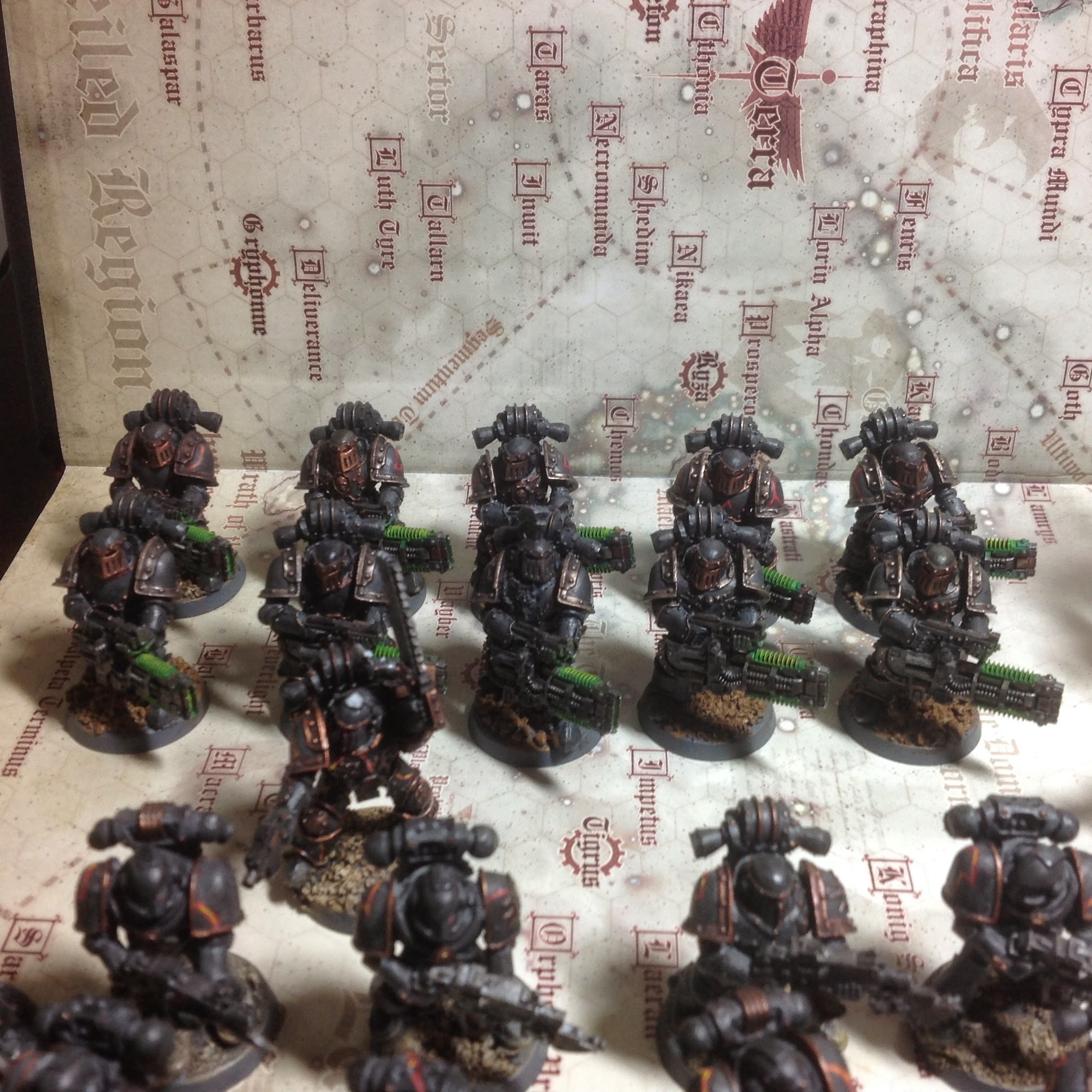 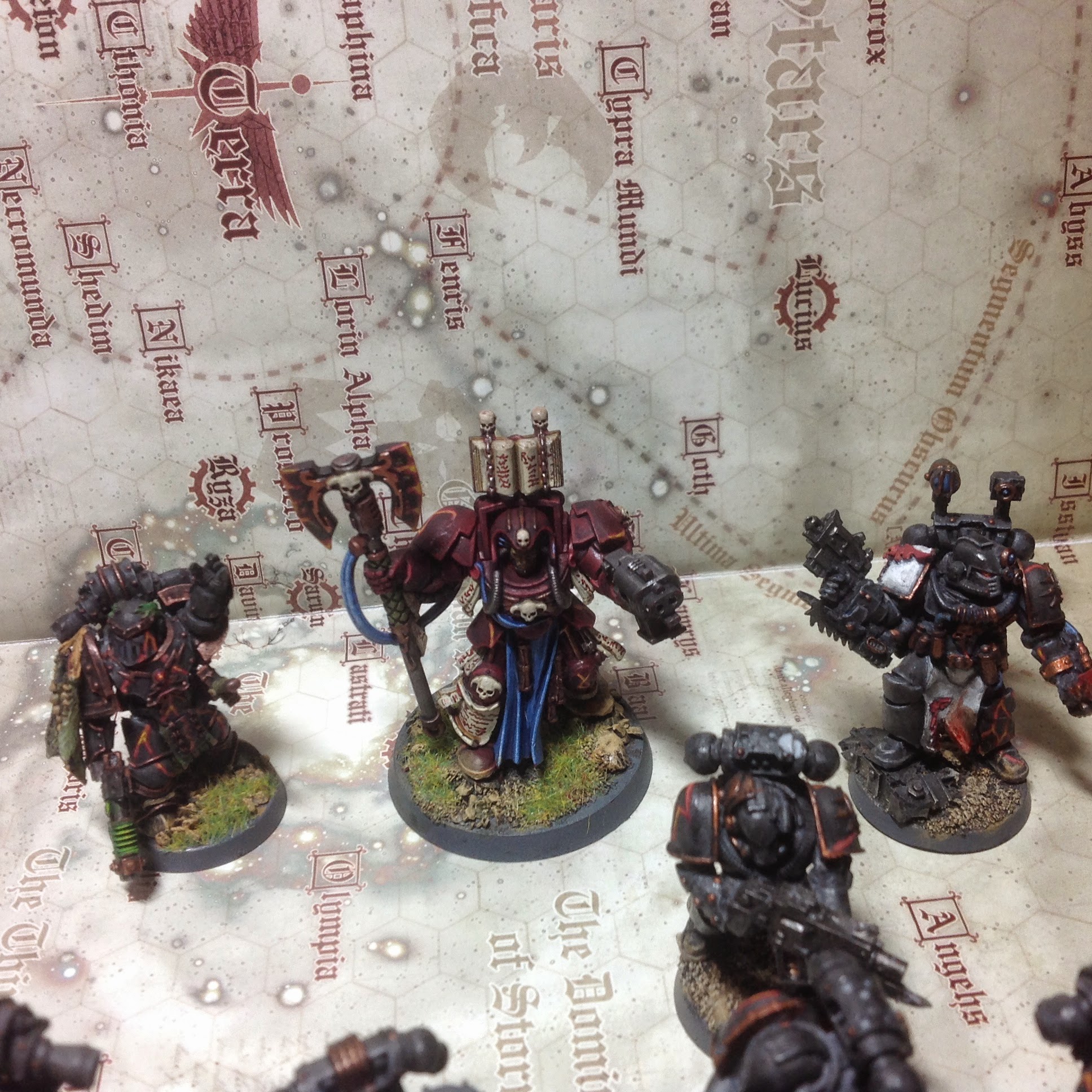 Note: Due to the Size of some of the Originals, I've had to upload them in a smaller file size so in those pictures, the colors might look a bit blown out. Thats why.

So there you go. 3k-something points of Imperial Fists.

Hey guys, heres a quick pic of everything ive managed to do for the challenge

howdy =) first, sorry for the crappy pictures, i just have my phone

but you can see closeups @ my HH thread: http://www.bolterand...-draykavak-wip/

and my armies so far:

Awesome to see all these army shots guys. I'm blown away with all the progress and skill on show! Atia, the death guard force really is stunning! MoM, I only just appreciated the awesomeness of your running contemptor, amazing pose mate. Thanks for posting these guys, look forward to seeing the armies grow even bigger!

Hey guys, awesome stuff from everyone. Super inspiring. This is my pledge from this month.

I've only been involved since January, but it's been an absolute joy to watch everyone over the months.

Getting a sudden urge to shout "Transform and roll out" here...

And here's a shot of everything I've added to my Iron Hands since starting the challenge.

My progress since i joined in November:

There are some amazing armies on this page! It's really humbling to be here. Here's me little army so far, which has taken a few years to cobble together. No HQs or officers yet, but that's next in line: Here are closeups of my favorites: Here's the Vexillari ("standard barer" in nerd). Of all my models, I spent the most time on these two. They're the best infantry models I’ve painted to date. I have many many more pictures on my blog:
http://www.powerfisted.com

...and I kicked off a thread here on B&C to show off some of my WIP stuff and tutorials:
http://www.bolterand...rials-bad-puns/


Thanks again to Kor'Vesh for making all this happen- and all the great posters here that keep inspiring people to paint amazing armies.

The armies in this thread are looking fantasic. Great work all.

Here is a list of the rankings of all of the competitors in March's Challenge for each of the three teams, along with the Frater's Champion (as voted for by the members of the forum) for each team:

The Sons of the Gorgon

And seeing as I, slightly embarrassingly, won the vote (thanks one and all), here are the pictures of the painting part of Marches pledge, my Salamanders Legion Rhino, Cynops.

I'm gonna get me a full 1,500pt list photo today, did all but about 6 models for the challenge since I signed up and I am well chuffed.

Enter... the Gorgon, Wyrmslayer, the bane of Asirnoth, the Great Iron Father and popular among the frater electorate:

"What monstrosities would walk the streets were some people's faces as unfinished as their minds?" -Eric Hoffer

Emperors Champion in December- battle brother, oathkeeper and virgin on the table top with a 30k game.

Thoughts for the ETL are to formulate a playable force, paint my vows for the ETL by doing 1 per month and make them as badass as my skills allow. Ill be airbrushing my knight and raptor so wish me luck:) Also, Id love to get in a game at some point as I miss rolling the dice in something other than the settlers of cataan.

Here is a brief summary of April's Casual Hobby challenge. Looking forward to seeing the victors post their models!

The Battle Brothers: Palak, The Hydra

Thanks for the votes! And thank you Kor'Vesh for organizing this nice little event every month!

This is the traitors Warrior Champion pledge from April:

Thanks so much for the votes guys :-)

Due to a need to trim Pinned topics, and upon full review by the AoD Moderating Team, this topic has been unpinned. Should you have any questions about this decision, please contact myself in PM, or one of the other Mournival Moderators.