If you thumb through the Salamanders section of The Horus Heresy Book 2: Massacre, you'll see a type of cuneiform in the top half of unit number diamonds. Though these markings only appear in Heresy Era use, there's nothing saying they won't prove of use for Salamanders of other eras.

A good example is on the knee of this breacher legionary. 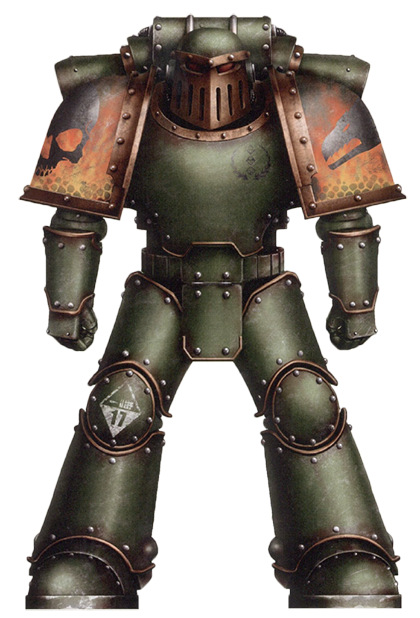 I've tried to decipher them in the past, but just when I thought I had the pattern down, I'd find a unit for which it didn't work. For example, most correspond to the line company listed for the marine in question, but in one case - Kobal Ru'than of 3rd Line Company - the cuneiform number does not match. A couple days ago, I realized the reason: there are multiple ways of representing certain numbers in the system - specifically 5s and 100s - and the cuneiform can appear in multiple contexts - usually as a line company marking, but also relating to personal honours. Once I understood that, the rest fell into place.

In the cuneiform, there are wedges that point in one of five directions: the four cardinal directions (left, right, up down) and a diagonal pointing up-right. Each direction corresponds to a place value in the line company number.

*Direction the wedge is pointing

**These function similar to a five-count

fifth diagonal crossing them out -

except that the pattern is to three up

A rather blurry example, but it

The number 7 would be represented by a cluster seven wedges, either all pointing up, or two pointing up with three up wedges overlapped by two left wedges. In the case of single digit number five to nine, the wedges representing the non-five portion appear left of the wedges making up the five.

Here, the number 7 is represented

by two up wedges left of two left

When used for a current line company the unit is attached to, the symbol is a white outline diamond, the bottom half of which is white, with the Line Company number in a sans-serif (looks to be Impact font at a glance) in the bottom half and Salamanders Cuneiform number in the top half.

Line company usage. Note that in some instances (like

the marking on the left), ones digits greater than 5 do

not always use the left pointing wedges.

When appearing in honourific form, the honours are displayed on a black diamond. In the bottom half of the diamond are the honour glyphs earned (the geometric diamond symbols seen most clearly on the Firedrakes model right shoulder). In the top half, the line company to which the marine was attached when those honours were attained appear in cuneiform. Thus Kobal Ru'than, a Terminator of the 3rd Line Company, attained honours - most likely those that earned him a spot in the 3rd - while attached to the 62nd Line Company.

honours gained while part of the

And there you have it. Salamanders cuneiform numbers, ready for use on your Fire Born units. And yes, being the Carlson that I am, expect these markings to have a decal sheet in the near future.

Nice bit of deduction there, brother. Impressive work. Now about these decals...

Sheesh! Give a guy time, Olis!

Also, did a small edit. After looking at it, the cuneiform 5 would have to be represented, because of the spacing, by three up/two left wedges.

Very nice attention to detail there.

You're awesome, Carlson. Thanks for sharing all your work, between this and the other markings you've done.

Definitely going to look at using these on my 30k Salamanders when I get started on them.


By our Blood and Blade His Will be Done!

Nice, may try and use them on mine. The numebrs may be easy enough to freehand, but the smaller diamonds ect will be a pain.

Edited the OP. While starting to place wedges for a Salamanders Cuneiform decal sheet, I realized that Tens digits greater than fifty would start running into the white border of the Line Company diamond. Since the Singles place has a 'High Singles' wedge, it would only make sense that the Tens place would likewise have a 'High Tens' wedge. Since the only place a down wedge appears is Kobal Ru'than, and the only place a known Hundred mark appears is the 147th LC Predator Infernus, the down wedge would be the most likely 'Fifties' mark, indicating Kobal Ru'than's honours were gained with the 62nd, not the 152nd.

Nice bit of deduction there, brother. Impressive work. Now about these decals...

e
@Olis & Carlson793 - I hope the cuneiform markers will be there!

Also tagged with one or more of these keywords: Salamanders, Horus Heresy