A Broken Throne - The Void Eagles

322 replies to this topic

Skal, what are your plans for the Legion's exemplary battles?

These have already been written and published somewhere in the thread.

Legiones Astartes: [Not sure I have the right to copy pre-existing rules verbatim]

The Nature of Warfare: Void Eagles may fire ranged weaponry at +1 BS within 9"

To Hell and Back: A Void Eagles detachment may re-roll failed Reserve Rolls for Flyers and models deployed via Deep Strike

Did my belated changes to the Voidborn red box. Don't believe we settled on weapons for the Saturators, which I kinda need now.

Also I need ship names and naming conventions, as well as the Ala Lux 's armament.

Some extra stuff for Foleith:

Quoyaba served as Master of Ordnance in the Tenth Fleet before his mortal wounding. His aptitude led to his internment in a Deredeo Dreadnought, and he put its formidable firepower to lethal use against the Insurrectionist tanks set against the Void Eagles spearhead.

Standardised weapon loadouts were rare in any IVth Legion fleet. Quoyaba’s Plasma Carronades are an unusual instance of these, several Dreadnought Talons of the Tenth being equipped with these deadly weapons to counter heavily armoured opposition. The IVth Legion’s predeliction for drop-assaults ensured that the likes of Quoyaba were frequently among the first of their brothers to draw blood on the ground. Indeed, they were wont to deploy their honoured fallen more frequently than many of their fellow Legions.

Vaskot’s markings attest to his former membership of the Second Flotilla’s Corsair squads, and his proficiency in close-quarters bloodletting is likewise reflected in his armament; even the underslung ranged armament in his case is a meltagun. Deployed with the second wave alongside the Primarch, Vaskot scored two kills on Insurrectionist Predator tanks. At the height of the battle, he destroyed a Knight Armiger, pulverising it and the pilot inside with his seismic hammer.

Considering his highly regarded station, Vaskot’s Ironclad frame may seem rather paltry compared to the mightier Dreadnought chassis. That he bore this machine speaks to the rather difficult nature of supplying most IVth Legion fleets, perennially at the bleeding edge of the Great Crusade. Two years after Foleith, Vaskot would be gifted with a Contemptor chassis captured from an Eagle Warriors invasion force on Genad.

I assume the VE don't have like designated Dreadnought Talon units?

I'm not sure what you mean by "designated talons", but some operate as squads, having been brothers in flesh-life. Others are fielded together based on operational effectiveness. Fourth Fleet has experimental dread talons, each fielding a different weapon on each mount.

Like, if they'd be grouped into a Talon on a permanent basis. By your take, they actually would be.

What do you reckon about titles? Could be a nice way of highlighting their eccentricity.

Quoyaba's title would be "Master Devastator" (being a former MoO, which in the legion is often a title awarded after proficiency in Support Squad ranks); Vaskot is "Espatier Ancient".

The squad may take:

The entire unit can take one of the following:

The Inductii Sergeant can take one of the following:

If it number 10 or fewer models the squad can take a Rhino as a Dedicated Transport.

Inductii squads may only be joined by Void Eagles apothecaries- no other Independent Characters may join them and no other characters may be assigned to them. In addition, the opposing player earns no Victory points for destroying the Inductii in missions where this is relevant.

"Bury me on Invictar", he whispered. The phrase was always pronounced in hushed tones, and away from the ears of the Primarch. While Yucahu always denied any world as his home, his legionaries had taken the adjective from the Invictarian Coalition as a metaphorical name for it. Cognate with the high Gothic "Invictus", or "unvanquished", the Void Eagles imagined Invictar as an idealised world where those who had taken the Nemoan Oath could finally set foot. More grimly, it was also pronounced as a last vow by dying Legionaries.

A full third of the Void Eagles are done. Just need to clean up the rules and get more stories.

A double dose, this one for the Morning Stars

History: 15% - Complete? - (Same questions as for the Shepherds. Do we need to change the format?)

"Although we are undoubtedly a breed apart, my brothers often reveal aspects of themselves within the names they bestow, as with any man. The same holds true for the Lord of the Void Eagles. It is true that he holds duty close to his being and enacts with a ruthless pragmatism that I have even criticized. Yet, this is not the whole picture of the Brass Lord. Within his chest is a a wandering spirit in love with the stars themselves. Perhaps Father desired an eternal rider, patrolling the vast distances of our galaxy. I suspect it is duty alone that roots dear Yucahu to Terra and to the Great Crusade. If ever freed from this chain, there is no doubt in my mind he will soar through the heavens and beyond."

New account for a lurker here. Was a big fan of this project and I got my hands one some of the new contrast paints. I decided to paint up some Void Eagles! Didn't turn out that bad 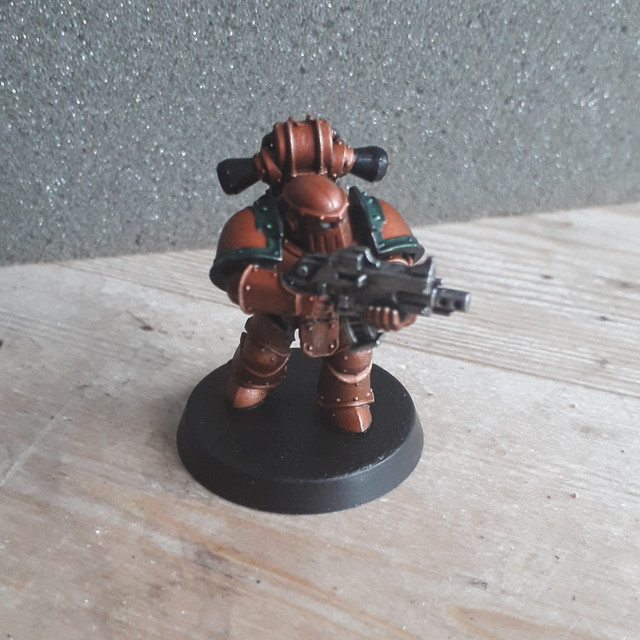 What was the name of the system the Void Eagles were ambushed in?

Legionary Hizon was one of a few newly formed companies on Thelum, who had completed their training but were yet to be assigned to a fleet. As fate would have it, their blooding would come against their treacherous kin of the XVIIth Legion. Those who lived would show little of the crusading spirit which their older brothers carried in them, a difference noticeable even among the often callous sons of Yucahu.

Hizon was born of Thelum, and as with many of that world’s fierce sons he proved a good fit for the Legion’s assault squadrons. This would see him rise to the infamous Worldburner elite shortly before the Insurrection, among whom he served throughout the Insurrection. Favoured for their terrifying and devastating arsenal, Worldburners served frequently as vanguard units during Yucahu’s “no man’s space” campaign.

The IVth Legion were one of the few to use the Saturnine pattern of Tactical Dreadnought Armour in any considerable numbers, using them to crush heavily armed enemies with overwhelming firepower. Gherka Fedh was among the Saturators deployed on Foleith, and earned commendation from his superiors for the particularly thorough destruction he wreaked upon the Insurrectionists.

In light of recent events, and to prevent misuse of my content, I officially rescind the Void Eagles and all associated content from the Brotherhood of the Lost project.

In addition, after concertation with LordThørn, I also rescind the Genesys Legion and Warbringers, as well as all associated content.

All my other contributions to the project are to be considered similarly rescinded.