Imperial forces from a feudal/modern world

I have been quite busy recently with work and am looking forward to a small break to work on a new army I started assembling over the holidays.  Warlord games has a huge range of 28mm historical armies and in their Pike and Shotte line, there is an Imperial army box with a good number of 3-musketeer style soldiers that I thought would make great Imperial forces from a slightly backwards world.

My plan is to use them as allies to my Inquisitor warband, and their old style clothing and gear fits nicely with the GW style of Imperial life.

Armed with Las-lock rifles, they are of similar power to standard model lasguns, but instead of being powered by a rechargeable battery pack, they use larger single shot batteries that can be recharged at a charging station after each use.  Several soldiers also use flamer weapons converted to fit on their arms making this force useful against xenos and lightly armored troops.  (Gunline troops protected with plenty of flamers to provide brutal overwatch from charging assault oriented aliens).

Allied to Inquisitor Valeria Mane Retento, these soldiers wear the Inquisitorial seal on their shoulderpads and serve alongside the Inquisitors personal bodyguard of Repentia from the Sisters of Battle, the Inquisitorial psykers sent to bolster her against Xenos based psionic attacks and her Bullgryn slabshield wall that provides a mobile wall of protection.

Greenstuff press mould shoulderpads made from the arms from Inquisitor Karazmakov model.  Hope I spelled his name right...

Backpacks and goggles added to several models to bring them into a more modern age.

A single gas mask came on one of the goggle sprues.  I wish I could find a bunch more of these!

Command squad ready to convert to Imperial style weapons.  Chainswords for everyone and maybe a plasma pistol I have lying around for the guy who is not holding any weapons yet.

I really like the old style hats and poofy clothes on these models and I feel they fit great with the artwork found in the Codex: Inquisition.  Basing these guys should be interesting as I will want to cover up the existing smaller bases they have.  Maybe some white glue and a simple layer of sand will work.

What exactly is a god, anyway?

V Legion Sergeants with Power Glaives: AP 2 faster than you.

Looks really good. Another source of archaic looking stuff is the Militarum Tempestus Scions. They look more like dismounted Prussian Cuirassiers, as opposed to more modern looking storm troopers (the 5th ed Stormies or Kasrkin). So you might look there for some inspiration/bits or whole models. With a bit of work they could tie into your small force rather readily and not look out of place (you might not even need to do any conversion).

Quantity has a quality all it's own...
No OPLAN ever survives initial contact...
You, you, and you, panic. The rest of you, come with me...
77th Cadian Shock Troops, Imperial Guard Codex Update Ordo Arcanum and Ordo Explorator Fanfiction

I suggest hitting some bitz sites for some las gun barrels, if you add the barrel nozzles onto the old style guns it will bring them into 40k a bit more. Can we see one of these next to a 40k model of some sort for scale purposes, they really do have a Peter Cushing vampire hunter feel to them

Looking at the bases they would scale a bit smaller than regular guardsmen.

Quantity has a quality all it's own...
No OPLAN ever survives initial contact...
You, you, and you, panic. The rest of you, come with me...
77th Cadian Shock Troops, Imperial Guard Codex Update Ordo Arcanum and Ordo Explorator Fanfiction

I'm waiting to see these painted. The idea is great. I would suggest using the pikemen for mounting flamers.

I just got my airbrush setup and am experimenting with how to paint with it. The last squads of troops should be finished being built soon and I will get some base coat and highlights done shortly. I will also show some side by side with the repentias and psykers from my inquisitor warband soon.

The flames need hoses or something and I am working out how to make them look good. The hardest part is gluing them on perfectly straight.

a bit of patience and a set of tweezers will help in gluing fiddly bits.

Perhaps empire steamtanks for the hellhounds?

any plans of rough riders?

I've been eying that set for a while now, and it does come with about a dozen cavalry models, so rough riders almost seem mandatory, or some kind of zany sentinel conversion.

Thanks for the words of support for this very experimental choice for an AM force.  I finished assembling everyone and added some weapon upgrades for the command section and the flamer  special weapons.  I even found  an old 3/4 complete Leman Russ with a plasma cannon to convert into a 'fire magnet'.  I am trying to resist turning this army into a huge horde of cavalry, tanks and old timey troopers, but my 9000 points of Tyranids leads me to believe that I might be doomed already.

I am looking at using some old bits and maybe buying some ghoul arms to convert some of these troops into genestealer cult members.  What fun to have the option to play a straight up AM army or spice it up with either an Inquisitor or genestealer cult.

I might just do like ten of these troopers and two or three of the leader models to represent a magus and the multi limbed first and second generation of hybrids.  I even have an old metal patriarch lying in my bitz box somewhere.

Here is some of what I have managed so far.

Troopers standing alongside a Repentia in service of Inquisitor Valeria Mane.  Compared to normal Human figures, these guys look pretty good for size.  I am still wondering how they would stack up against a heroic scale Catachian or Cadian trooper.

A wider shot of several troopers alongside the Repentia.  A psyker is visible lurking in the background.

Flanked by two Troopers, the psyker is made from a wide assortment of Human and Elven parts.

Today I started basecoating my Platoon of Feudal soldiers.  For the bases, I am looking at using a small bag of tiny gears I am using to base my Deathwatch Marines. 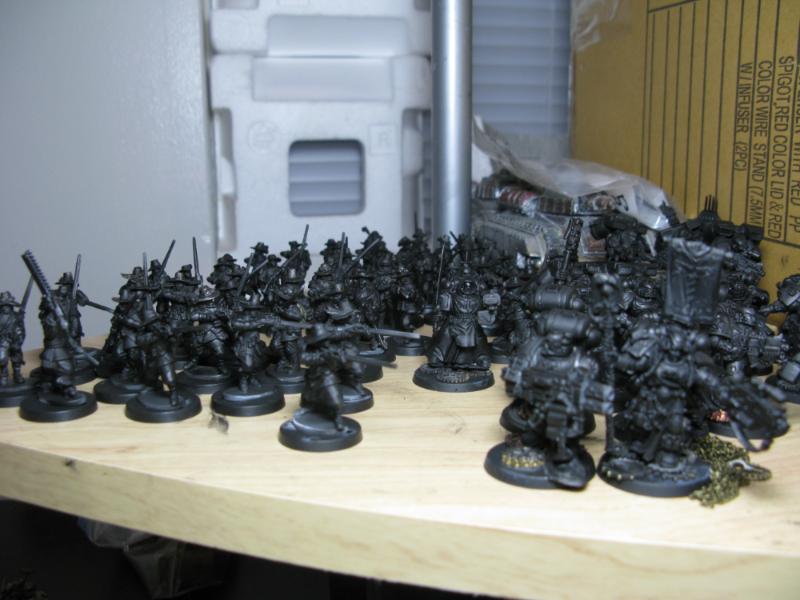 I am linking these guys to my Deathwatch Strike Force.  Three squads and commanders totaling just over twenty models.  I am starting to really like how the difference in scale looks with the Marines standing next to the infantrymen.