318 replies to this topic

I'm considering getting these jump packs when I get around to my suppressors:

Yep, those look suitable, if deviating from the style a bit. Regular jump packs fit nicely to the style, but I didn't have spares around. Just keep in mind that the ammo belt goes to a drum fixed to the backpack (see here) - either put box/drum mags directly onto the autocannon (there were 3rd party bitz IIRC), or find a way to cut the existing ammo drum off one backpack and fix it to the new one.

Yes the belt may cause some issues. I'm not sure how I'll handle that yet. Shooting from the hip I wonder if I can take the drum off the backpack and attach it to the receiver of the auto-cannon. I've got a lot to paint before I even look at these guys.

WiP update - the "less repulsive Repulsor" is finally getting somewhere. 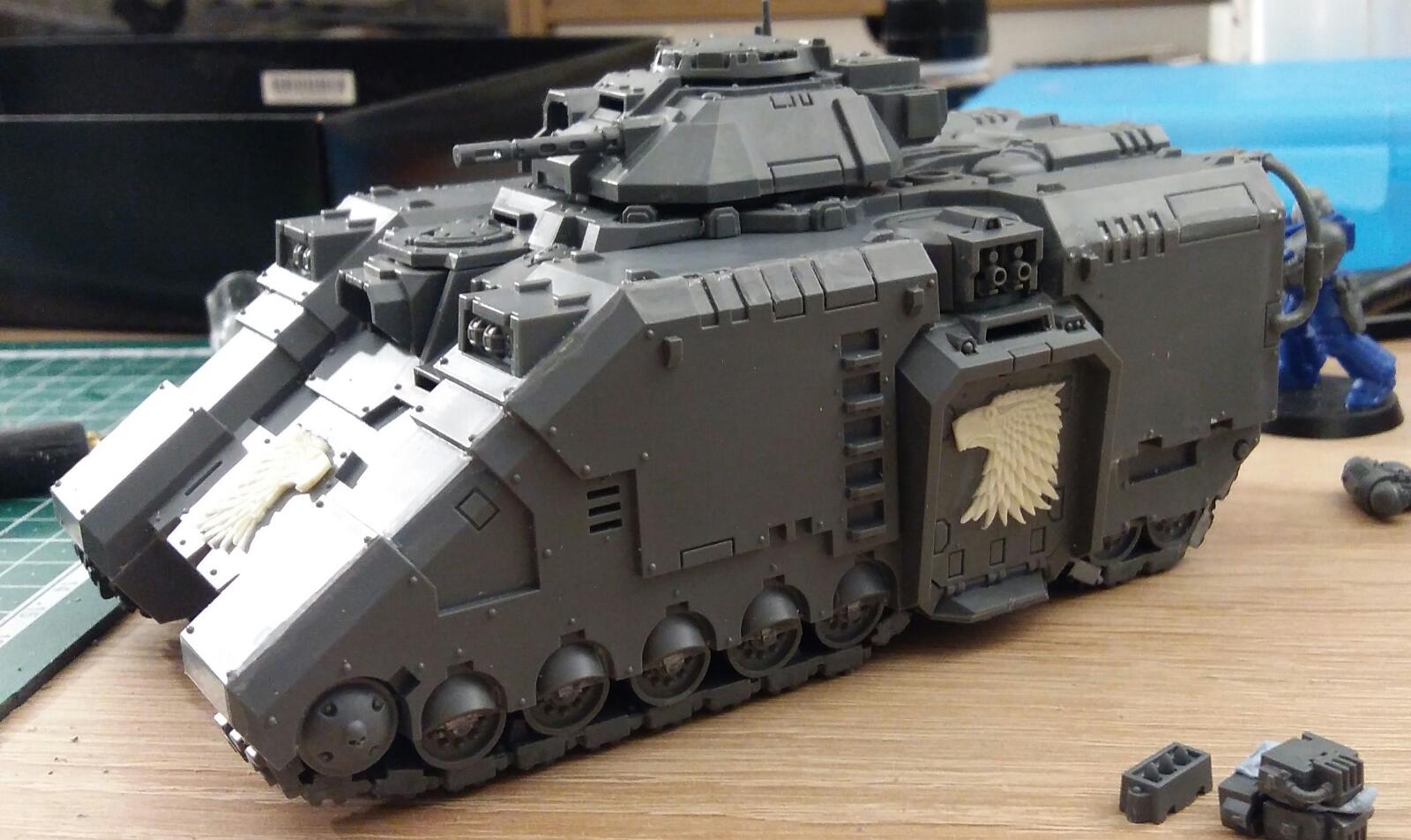 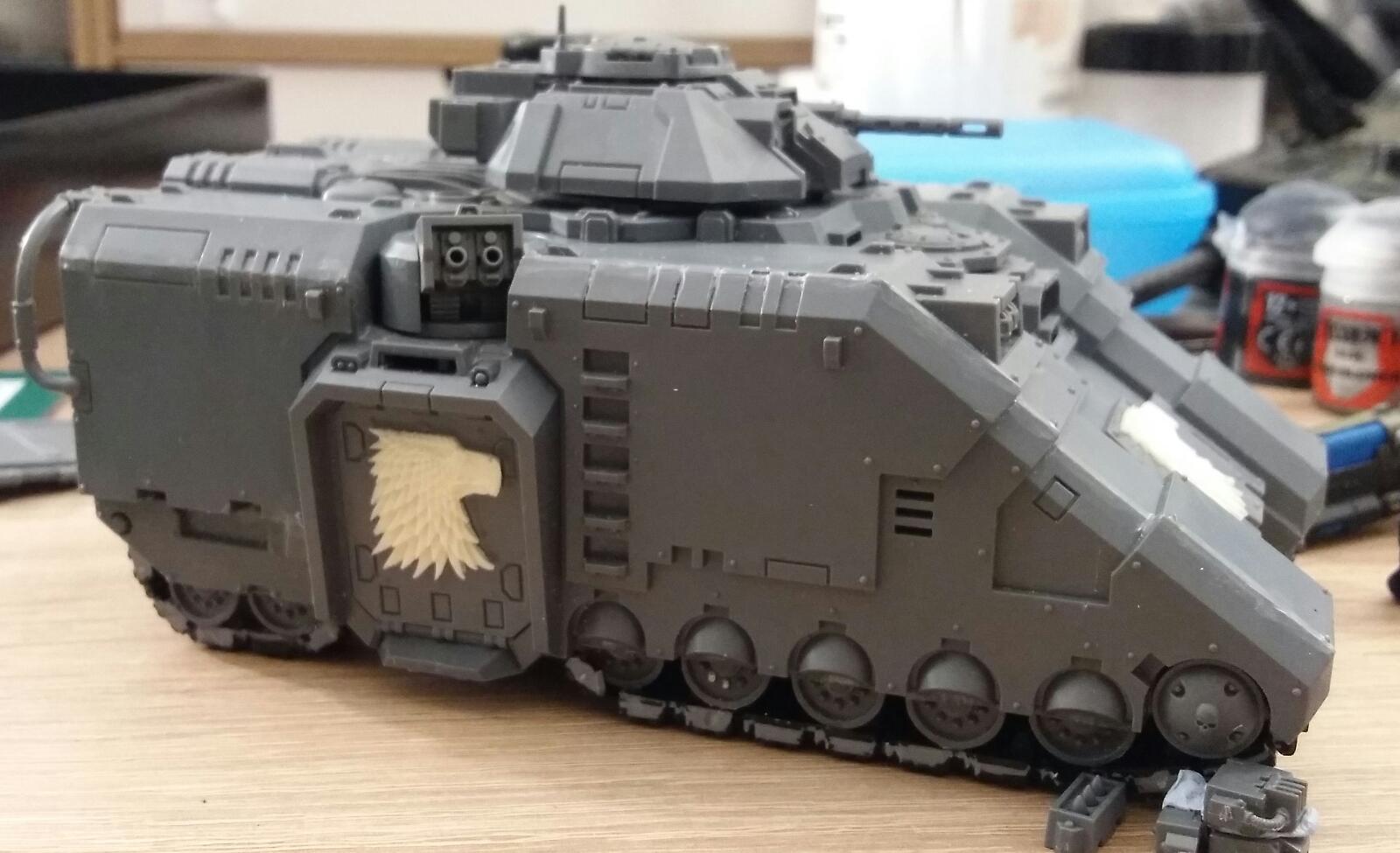 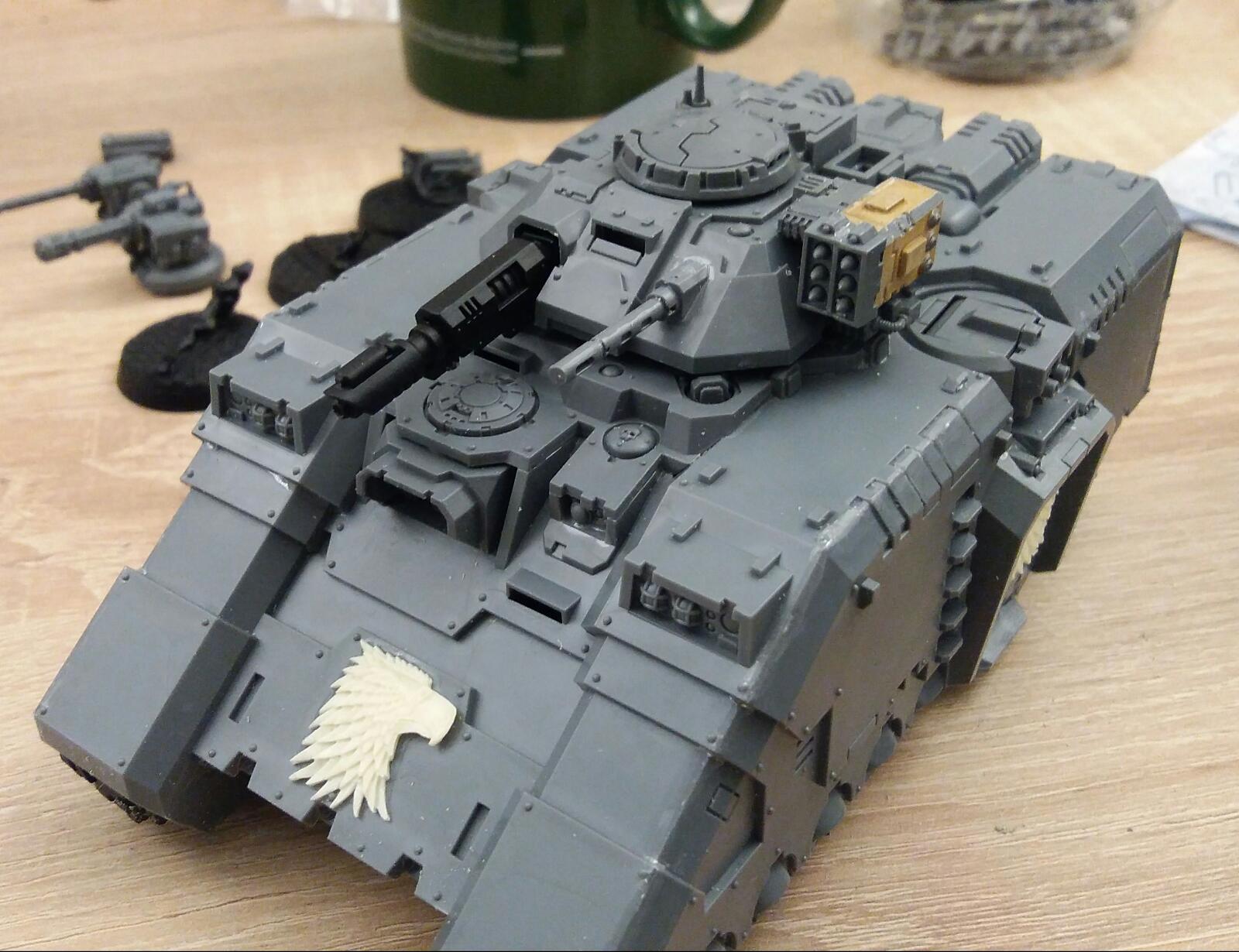 LandRaider tracks, Rhino side plates for wheels and lower rear armour, and a compact dual krakstorm launcher to clean up the look, instead of plastering the turret with random missile launchers. Pintle guns are done by autonomous weapons platforms (in the back of the last picture).

Still to do is the entire decoration, but I'll look into some real world tanks as inspiration before doing so. Still, it should be finished for the ETL start.

That looks really crips. I saw your post in the New Repulsor thread and wanted to ask if you had pictures. Very nice looking. If I ever get around to adding a repulsor I may go this route vs the hover mode. A lot less highlighting too if the grav plates are off!

I'm considering getting these jump packs when I get around to my suppressors:

Yes, love that Jump Pack! Let me know how it works!

@MN I love the repulsor. It looks so much better than the original. If you ever end up doing a second one, a couple WIP shots and a short tutorial is ok order, imo.

It's still unbasecoated and accessible - I can make a few shots describing all necessary steps. Give me a day or two...

Okay, here's the rough process. It's not arranged step by step, but it should give an impression on how it's done.

To convert one Repulsor, you will need:

-3x Rhino outer side panel (those are left over on every single Deimos Rhino - ask heresy players). One left, one right, one doesn't matter (track wheels count)

-1x Rhino front plate (again, leftover for anyone who used the chapter specific ones)

Note - with the storm bolter/fragstorm turrets, there is no way to feed one track all the way around the tank. So I made two separate drives per side, which doesn't seem necessary for the new variant.

From the Rhino panels, you will need the bottom track wheels (a total of 7 per side), and the rear section to mask the missing antigrav parts at the Repulsor's rear.

The track wheels need to be roughly level - the pic above shows the extrusion connecting it to the side panel cut off, but everything on the same height of the wheel needs to stay there. This "connecting tab" above the wheel's half circle is then glued to the inner side of the Repulsor's outer side panel. The interior row of wheels won't be visible anyway, so I just put some sprue in there to support the other side of the tracks. I'd advise having the tracks on hand when glueing the wheels, so the wheels can rest on the tracks and stay level. 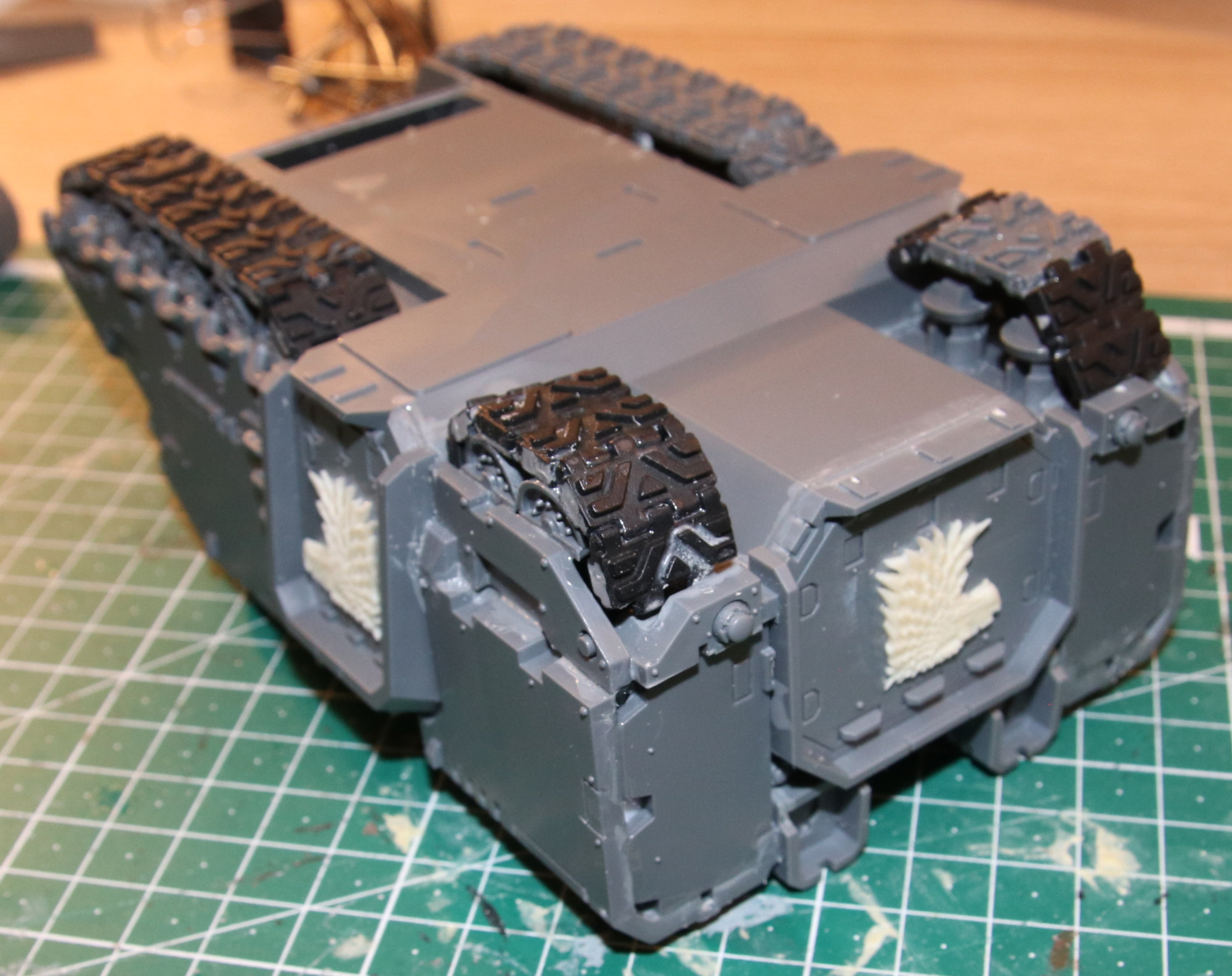 The forward wheels are easier to do than the rear, I'd advise doing them first to get the hang of it, then first file down the Rhino rear plate part to be level with the forward armour. For the rear part, I did include the original antigrav stems as support for the tracks. 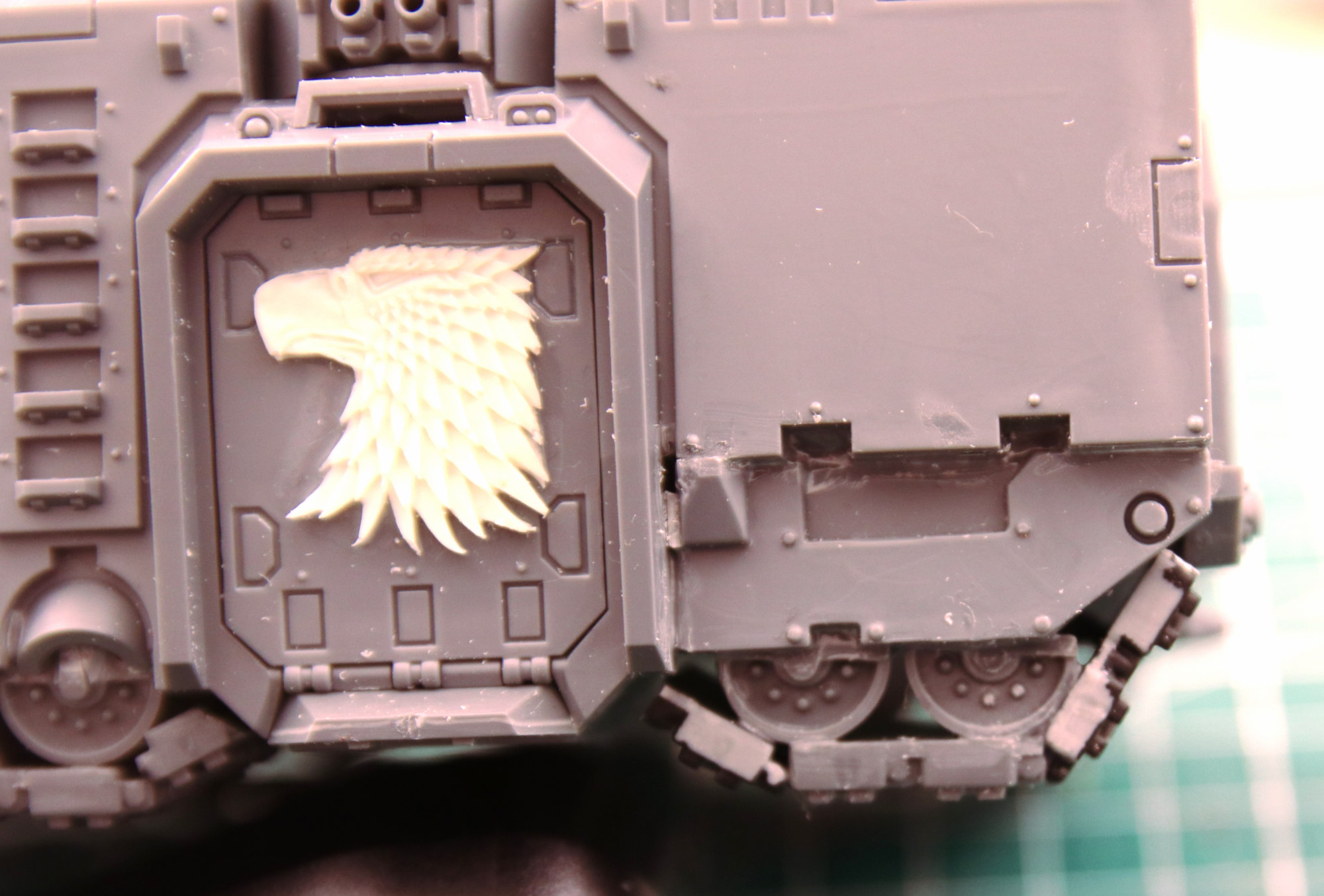 Applying the tracks has a few options to it - the LR kit has different lengths, I don't have a complete arrangement of links as I just cut and bend however necessary, both sides are different in that matter. To fit the rear track sections, it may be useful to first do the rear section (detailed further below), so the tracks fit the rear plate with the cut-off jet engines.

As the front of the tank is now missing the repulsor stems/plates covering it, that's where the spare Rhino front plate steps in. Cut a few millimeters off the sides, dry fit and mark where it is level with the main hull, then cut off there. The gap on the underside can be closed by plasticard, but I doubt anyone will notice. 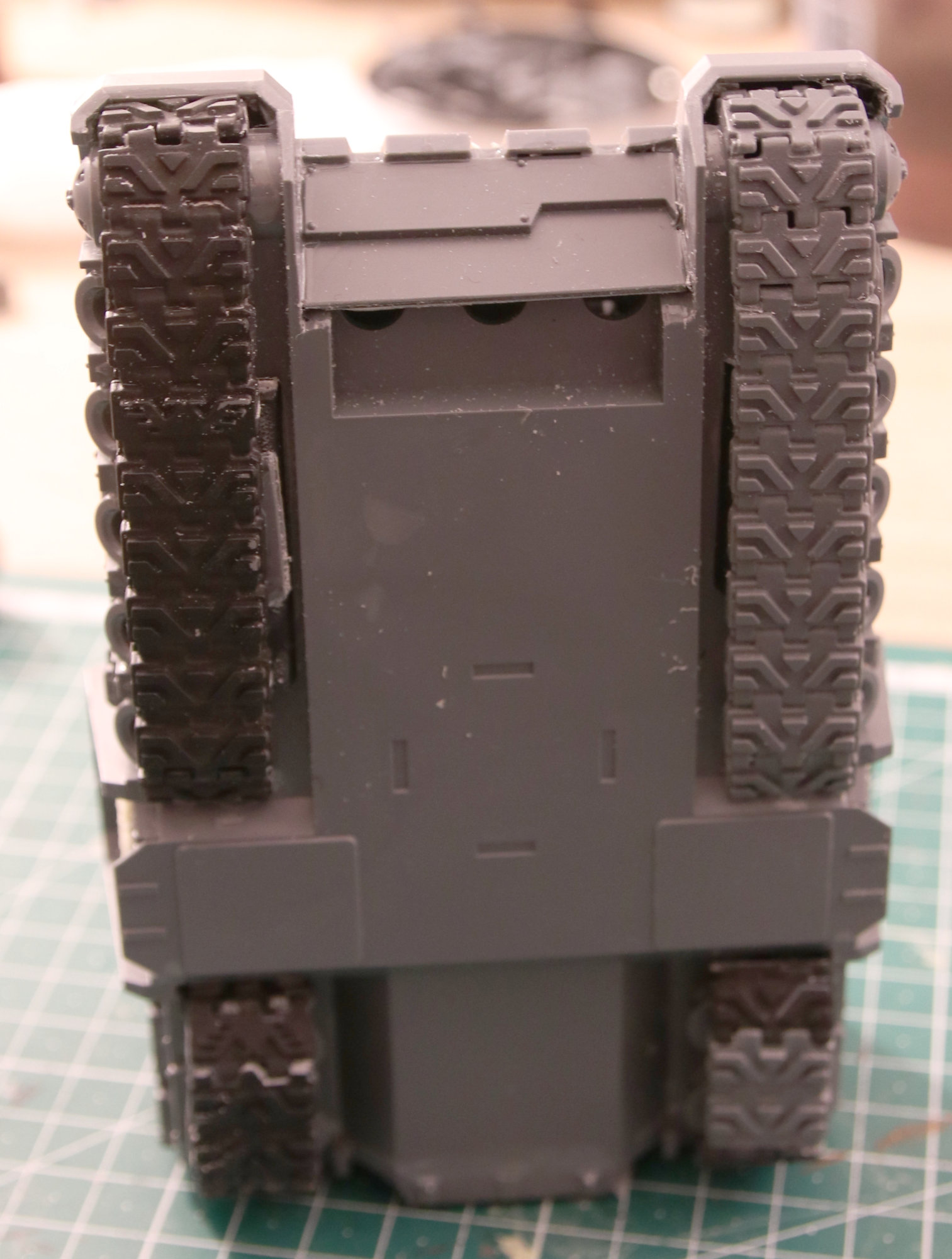 At the rear of the tank, there's now a useless propulsion system. Before putting in the part with the 4 jet engines, cut off the engines and file it level. Then it can be covered up by plasticard, or (in my case) the Rhino hatch plates. I removed the railing too, there is little sense for it on the rear of a regular tank. Cover the area with gear for a more natural look. 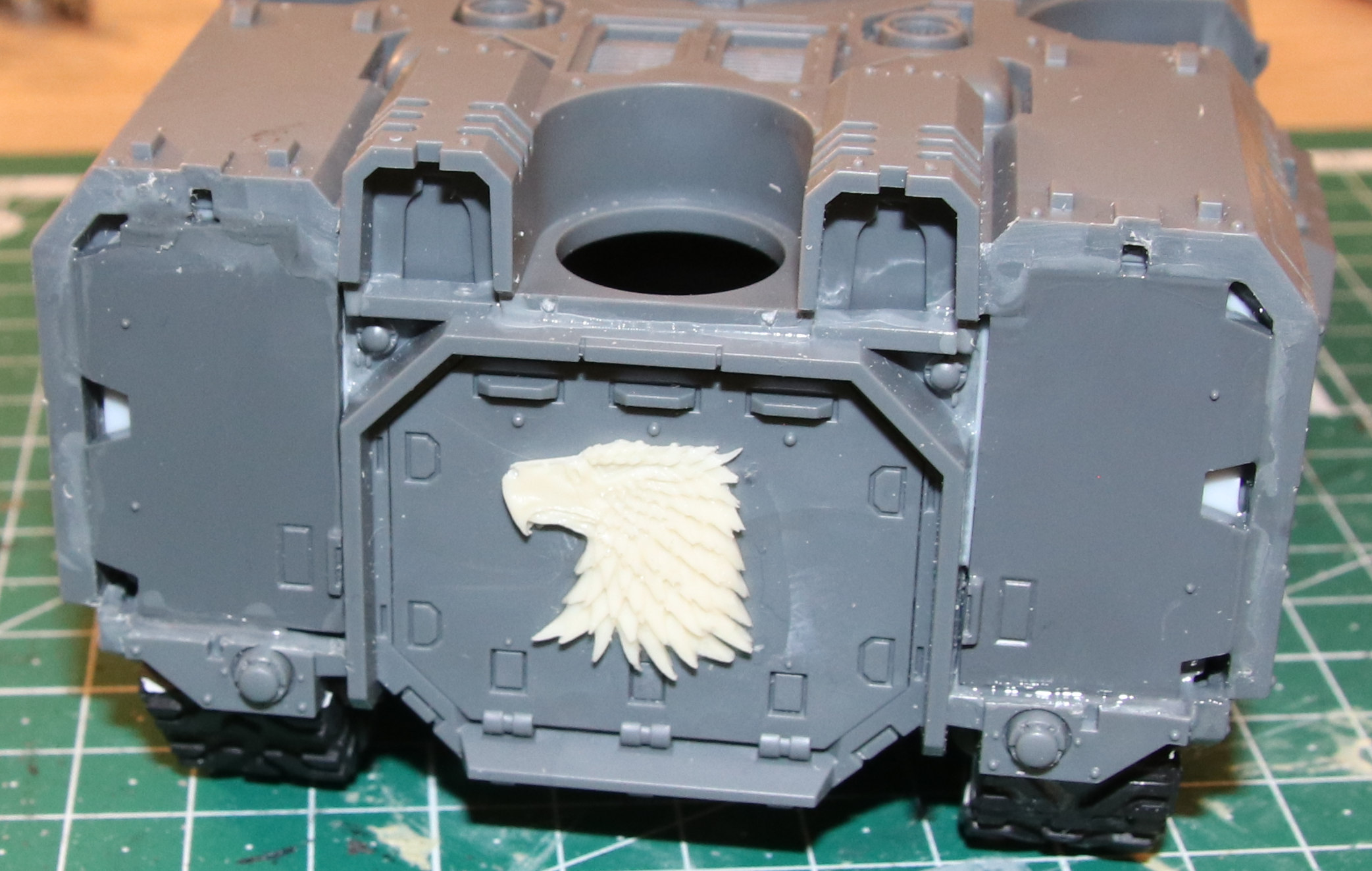 And that's it. I'll post pics of the finished version when it is done (probably a few weeks into ETL).

That's a really nice job and looks so good. I kind of like the two track segments per side.

Can't wait to see it painted up

That's some great conversion work. You've taken what I think is one of GW's ugliest models of recent times and made it look very cool.

For anyone wanting to do this I know scale modelers can buy track kits by themselves for their own work. I would imagine you could get something suitable for a similar conversion if LR tracks can't be sourced.

WHAT IS HAPPENING UP IN THIS PLACE?!?!


"Fully dressed in the ancestral Terminator Armour of their Chapter they rise to a new level of battlefield supremacy, a level where monstrous tanks are but playthings of a child, and where Terminators, Daemons and gods stalk as equals." -Thunder and Lightning, White Dwarf 116 (UK)

Got a bit of detailing done, as well as clear a lot of the smaller things. This time, I'll not entirely cover the tank in gear, keep it a bit more realistic. So one half should be good to go, next week the other one plus sandbags on the front/turret gap. With RL obligations, it probably won't get done till ETL start, but it will be part of my second vow. 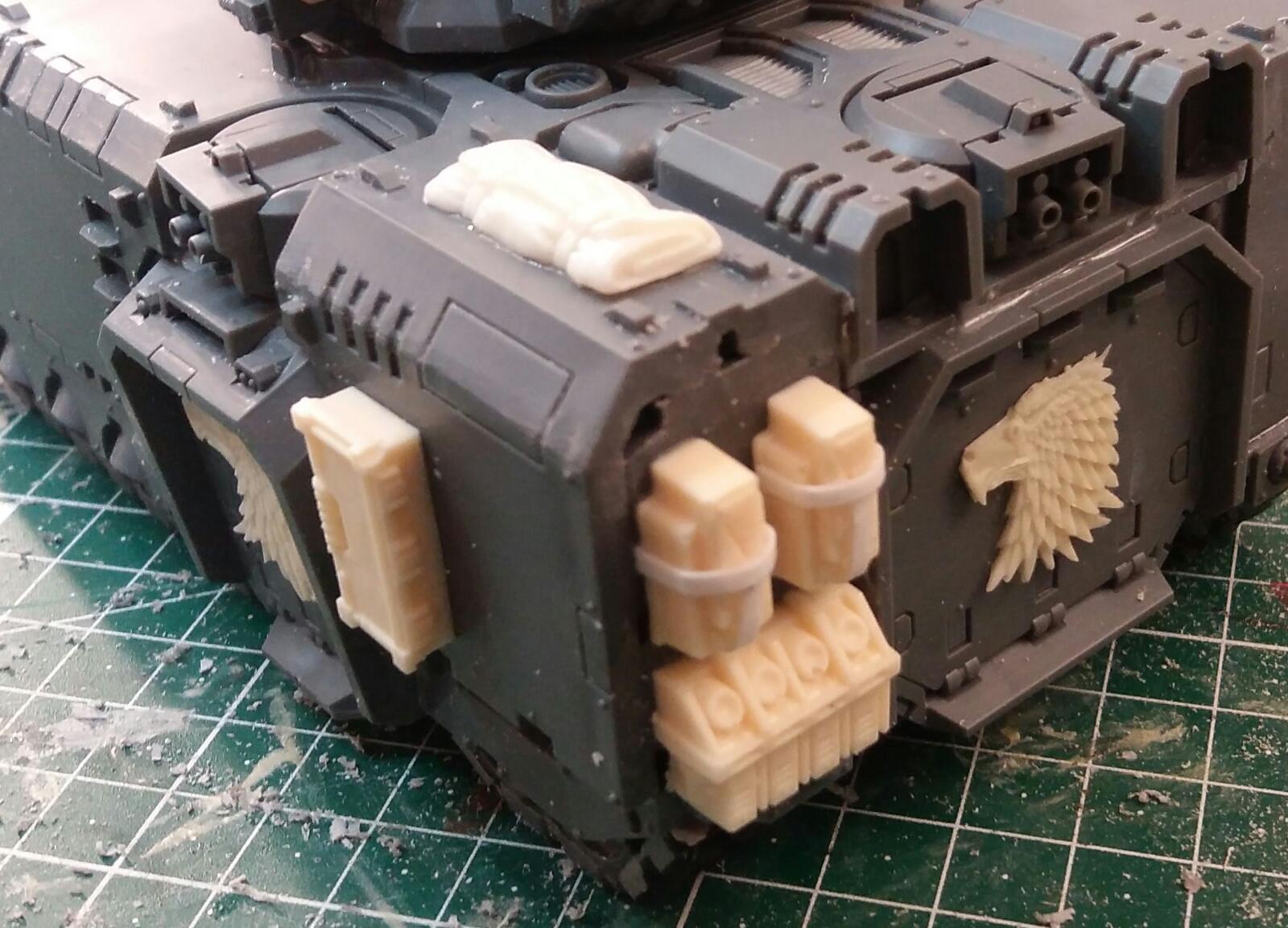 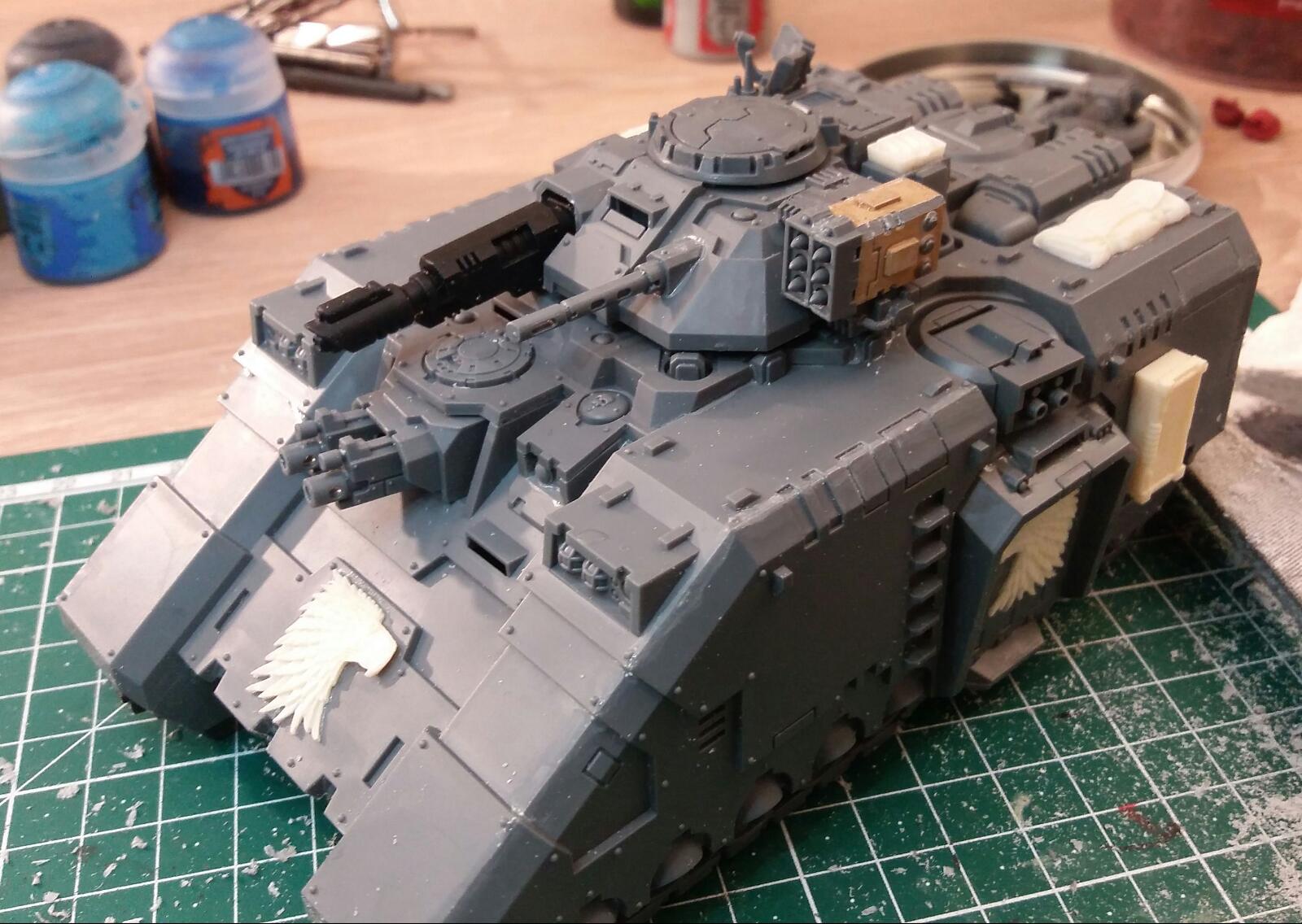 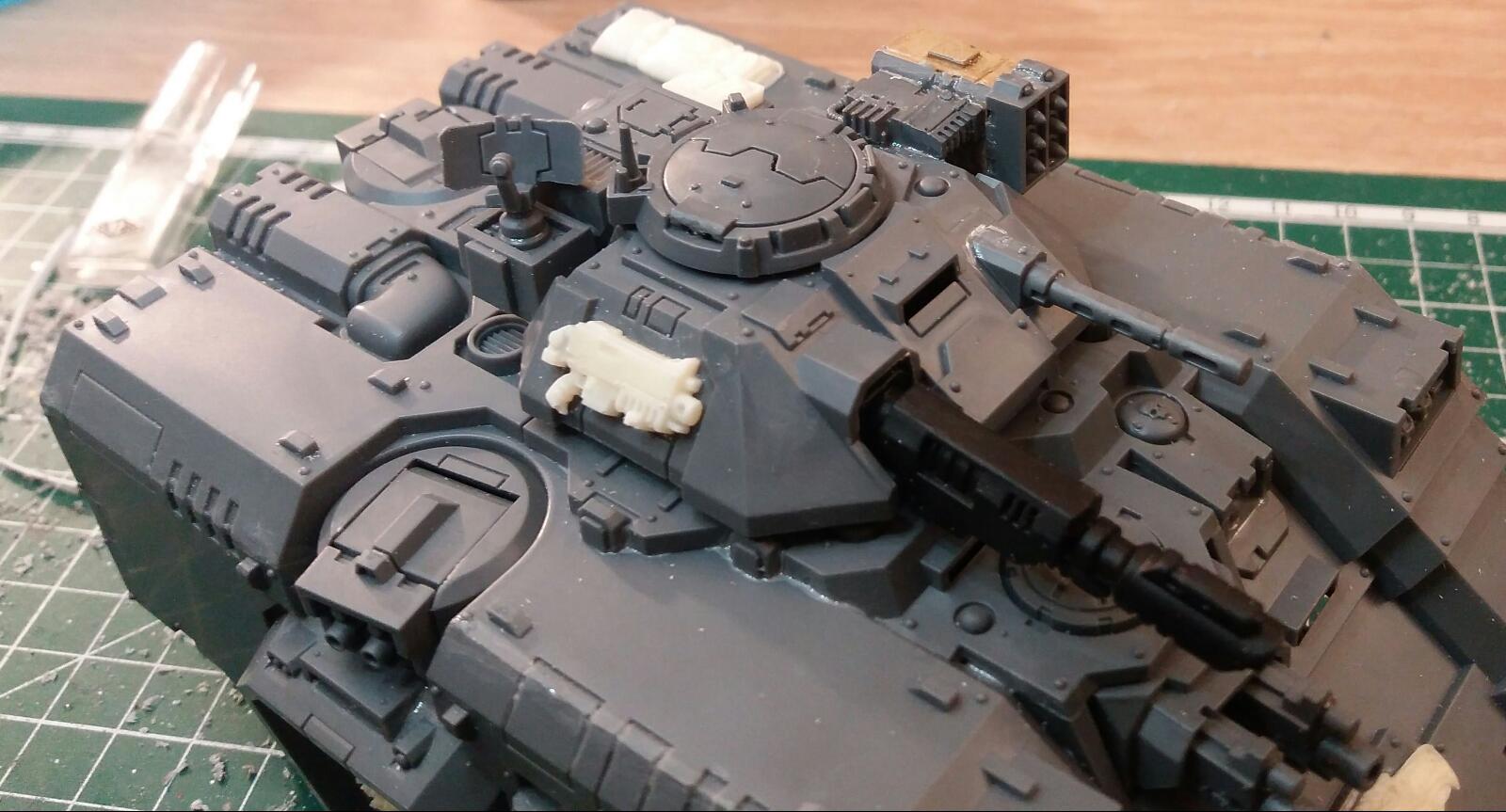 I love all the stowage that you put on your models. Really makes me want to get some resin and bits and make my own molds.

I love all the stowage that you put on your models. Really makes me want to get some resin and bits and make my own molds.

It's easier than one might think, as long as you do one-part molds. Stowage (and vehicle doors) being flat on the back side makes this rather uncomplicated, so you can get used to working with silicone and resin.

First model of the ETL vow finished - need it for a game tomorrow. There's no motivation like a deadline... 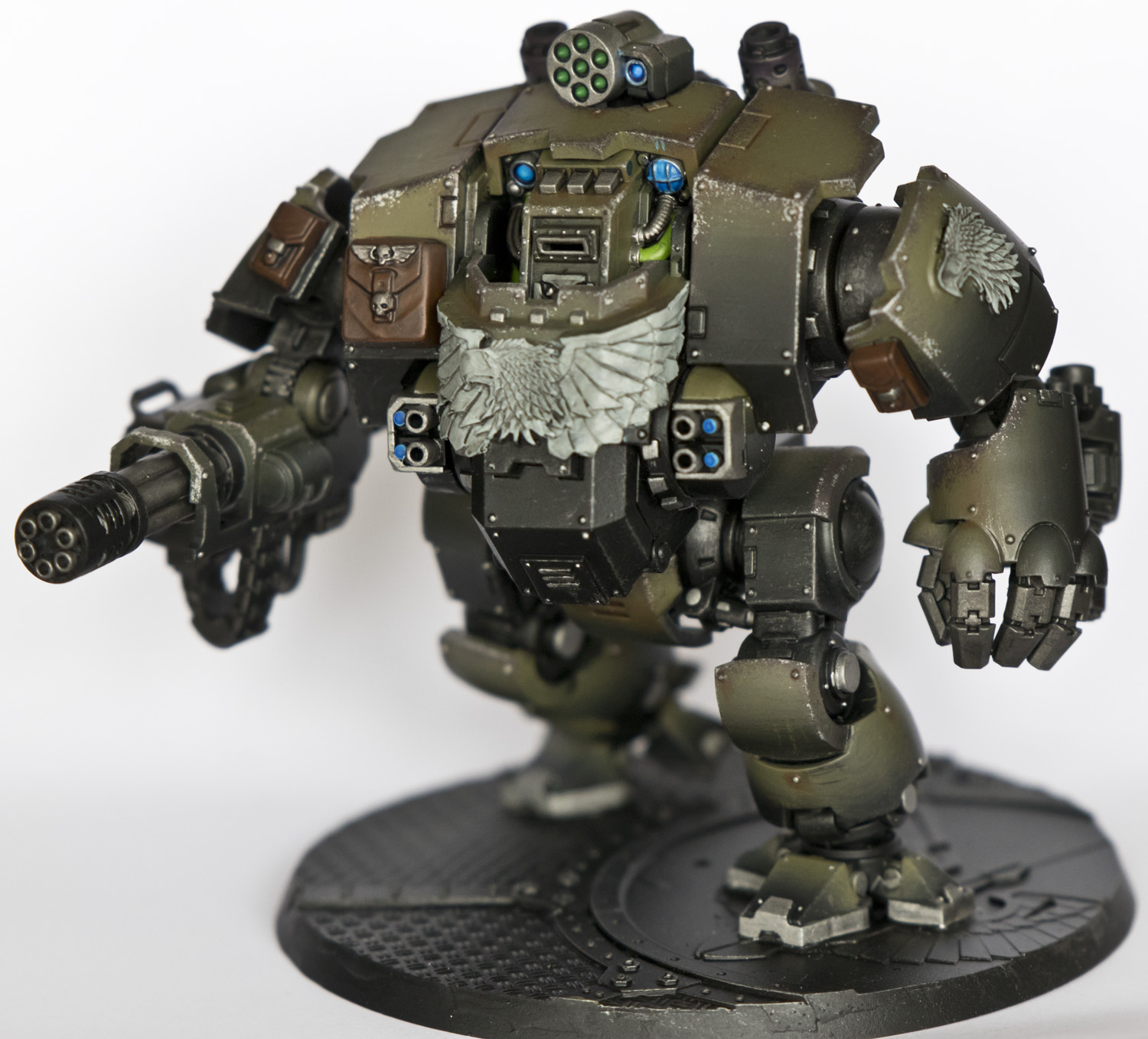 That looks really good. Do his brethren carry around a step ladder so they can get into the pouches on his armor?

That looks really good. Do his brethren carry around a step ladder so they can get into the pouches on his armor?

They gotta sit on his lap, and listen to the wisdom of the ancient while they get their stuff...or just his rants about how the new redemptor chassis makes sneaking even harder.

Nah, at least it doesn't look all too empty. My guys don't have bling, but a bit of spare tools/ammo/supplies never hurt.

Gorgeous blending of green and black.  Love the Raptor sculpts.

Inspires me to add more black to my Aggressors than I originally intended. I cant blend but I'll figure ... something lol.


Hope is a moment now long past, the Shadow of Death is the one I cast

Well, there's the blending tutorial if you want to try, but I guess the FW-typical black stripe is easier. The latter looks great, but with my gradients they're unusable for me.

The Redemptor is well done.

Given the practicality of the Raptors, those pouches on the Redemptor make perfect sense: spare parts and specialized tools for the techmarine, adept, or good samaritan battle-brother who has to do urgent repairs in the field.  I'm going to have to remember something like that when I add a dread to my force. Good thinking!

"If you're leaving scorch-marks, you need a bigger gun." --The Seventy Maxims of Maximally Effective Mercenaries