67 replies to this topic

This will be my thread for my Iron Warriors.

I started this thread for myself, partly because I was going off topic in my own thread for my Word Bearers here...


I have a bunch of mk3 marines from BoP. Some of which I will make Iron Warriors. 20 for now.

I plan to get up to a 750 point grand co. These first 20 marines will be a 10 man havoc squad with 4 autocannons (converted from BoP heavy bolters) and 2 x 5 man with plasma. Need to aquire and build 5 raptors with 2 meltas, (I know bikes are recommended but I just don't like them) and some terminators... prefferably from calth... to build my elite... also need a PA chaos lord with a big mace...

my aux will be the munitorum containers.


Moving beyond 750. I plan to add some cheap fortifications, home built defensive line with comms and the various barricades, wire and tank traps for a start.
Bump the Termies up to 5 and a chaos lord in terminator armour, which will nicely come from a single calth box. Bulk the "tacticals" each to 10 with 2 plasmas and add 4 lascannon havocs in a tenner some how... and definitly a warsmith guiding some oblits, but...

I realy don't like oblits models... my plan is instead to follow in purturbo's footsteps and build robots to do the job instead, just no clue how to do it yet, only certain that they should look like smaller iron circle robots with WAY MORE DAKKA.

Worked on the fluff blurbs I did for the csm fluff thingy a while back.

It wasn't anything more than a crude outline written in as much time as it takes to read it, so it definitely needed work. And still does.

Suffice to say my grand company has been fighting a guerrilla campaign on the fringe of the galaxy. Operating out of strong holds left by the legion during the xenos races and either bringing human-occupied planets into compliance or destroying them if they resisted.' class='bbc ipSeoAcronym'>GC that the imperials forgot about when they expunged records of the traitor legions. They have a strong affinity for purturbo's warmachines, so mt oblits will have more in common with the Iron circle hopefully once built.

"Men of Iron" STC inspired robots for oblits and mutilators, mauler and forge fiends. Demons of the technovirus. Thinking terminator movie series scenes of the future war. Yes it's a little necrony. But more like their old art where everything looked more like imperial and chaos stuff then the slick stuff we see for necrons now. Plus some darker stuff maybe.. idk. Ideas are spinning,

basically I want my iron warriors to use more machines than demons.. or rather, no demons, just super evil robots... emphasis on use. They will still be mostly marines in the army.

I'm building my grand company along similar principles. Looking forward to seeing updates on this
For the obilts I'm thinking of cheating and using centurions as a base

Yeah, cents could work. But I'm not a fan of them. You just mix and match weapons so they look ike they have the needed variety.

I'm very lost on the obliterobots idea still... but I've got lots of PA and eventually cataphracterminators planned first.

I hear ya on the PA and cataphractii dudes Canadian

Use Mechanicus Kastelan Bots and Chaos them up?


"The third and final group are aberrants; Chapters who, through quirk of gene-seed, mutation or stubbornness, eschew the Codex Astartes in favor of other structural and combat doctrines......Others, such as the Space Wolves and the Black Templars, remain stubbornly independent, looking to their own founder's ways of war and caring little of how they fare in the eyes of others......Such divergent Chapters play little part in this volume, for this is the tale of the Ultramarines, and all who follow their example."
- from the 5th Edition Space Marine Codex[/quote]

Use Mechanicus Kastelan Bots and Chaos them up?

Still looking for alternative sources for robots about the size of an Obliterator that can be used for converting into something that looks in line with the Iron circle battle automata but with more guns, or less refined melee for obliterators and mutilators respectively.

Forge world stuff is priced out of my league at the moment... The cheapest option is 40k admech robots, but they would take a lot of conversion work with parts I'm uncertain about sourcing... heck even ork dreds and kans and ig sentinels are on the table.

Just to varify are oblits/mutilators on terminator bases? They seam bigger in the pictures. I can't seam to recall the last time I've seen them in person.

Yeah 40mm bases. They'd probably look better on 50mm to be honest though, like the way a space marine was originally on a 25mm but looks much better on a 32mm.

I'm still at a loss for the counts as oblits robots...

My mind keeps imaging the old metal necron immortals back when they fit the old rough imperial design ethos before they became all slick looking... but those wouldn't be big enough... if the crons had a hunched over shooty warrior cast tbh at was big enough, adding studs and guitar wire and imperial weapons could work... but only of the warrior was terminator sized which I don't think exists...

Btw, I'm literally thinking these might be "men of iron" that my iron warriors and their dark mech "allies" have subjugated..

How well can i truescale up my CSM. ..

Well I wish I could help you with the Obliterator situation, but I can give you some insight on true scaling. I discovered Veteran Sergeants thread on here and Dakkadakka a couple years back and started down that road myself. BE WARNED! Its very rewarding but also extremely time consuming. He does a very thorough run through of his work, which is very helpful. I think ive done about 45 PA marines and 10 TDA before hittimg a bit of a wall. Now im working on a R&H army to distract me for a bit.

http://www.bolterand...ion-5th-co-wip/ Heres a link to my thread if you're interested. I strongly recommend this project, its a lot of fun. Ill definitely be following your work here

I've seen a couple of obliterator conversions that use IG sentinels without the cockpit,  had the different weapons configurations modeled on and painted in Iron Warriors colours. They were more robotic but with a little greenstuff  "daemon flesh" you could get the traditional "weapon morphing" look.

And if 'heresy' lies in considering their atrophied carrion-god detestable then yes, I suppose I qualify there also.

Thanks greens. (Tho your posting here may implicate you as one of the fallen, or validate the presumed heresy of your entire legion MUAHHAHAHAHA)

And yeah, sentinels had crossed my mind... still very torn...

Been a while... Just wanted to post some CSM stuff I tossed together.

Used a truescale technique on the old CSM kit resulting in a height very close to the new CSM from BSF.

I tossed in the chaos lord and for size comparison reasons also a BT primaris Im working on... 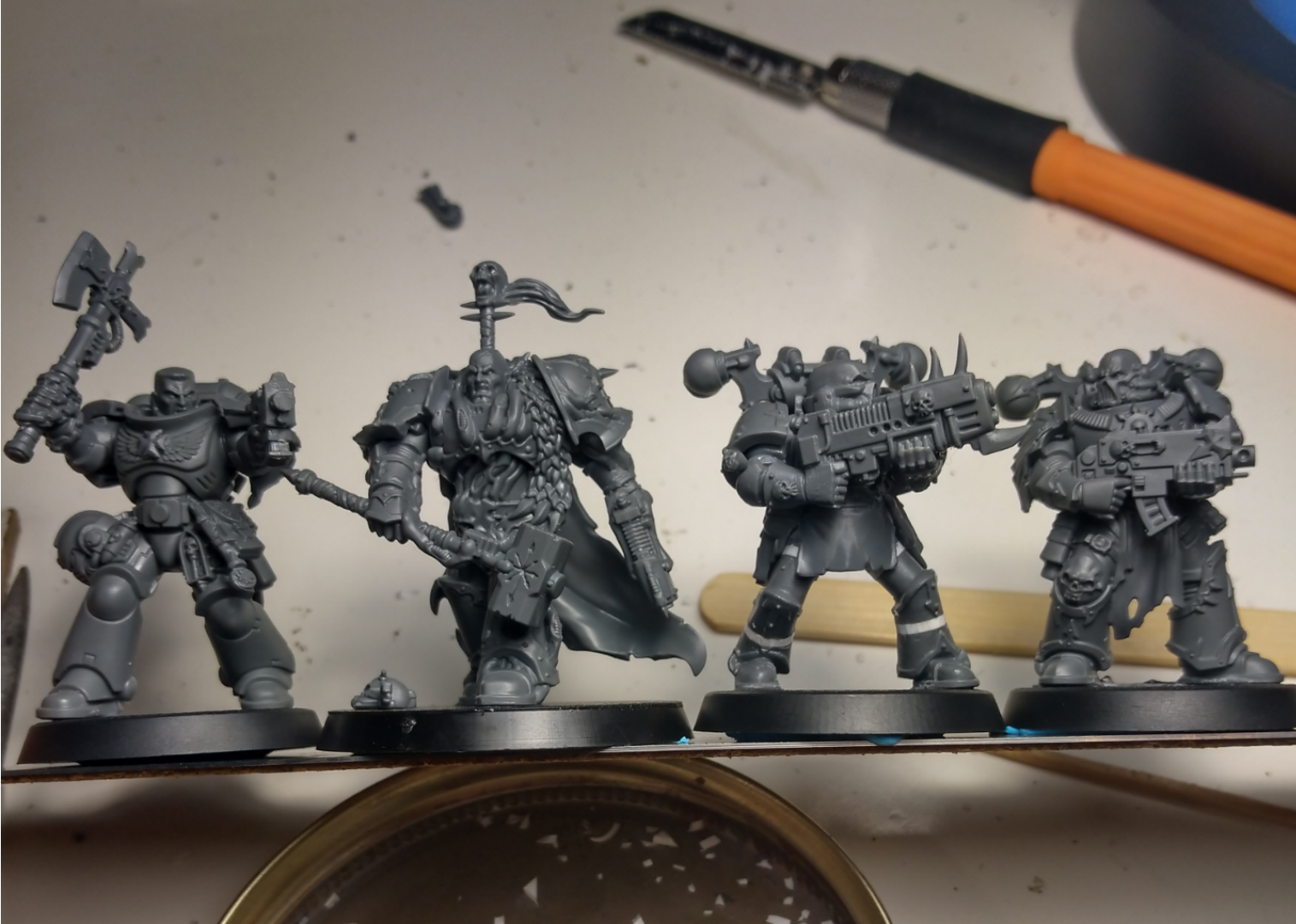 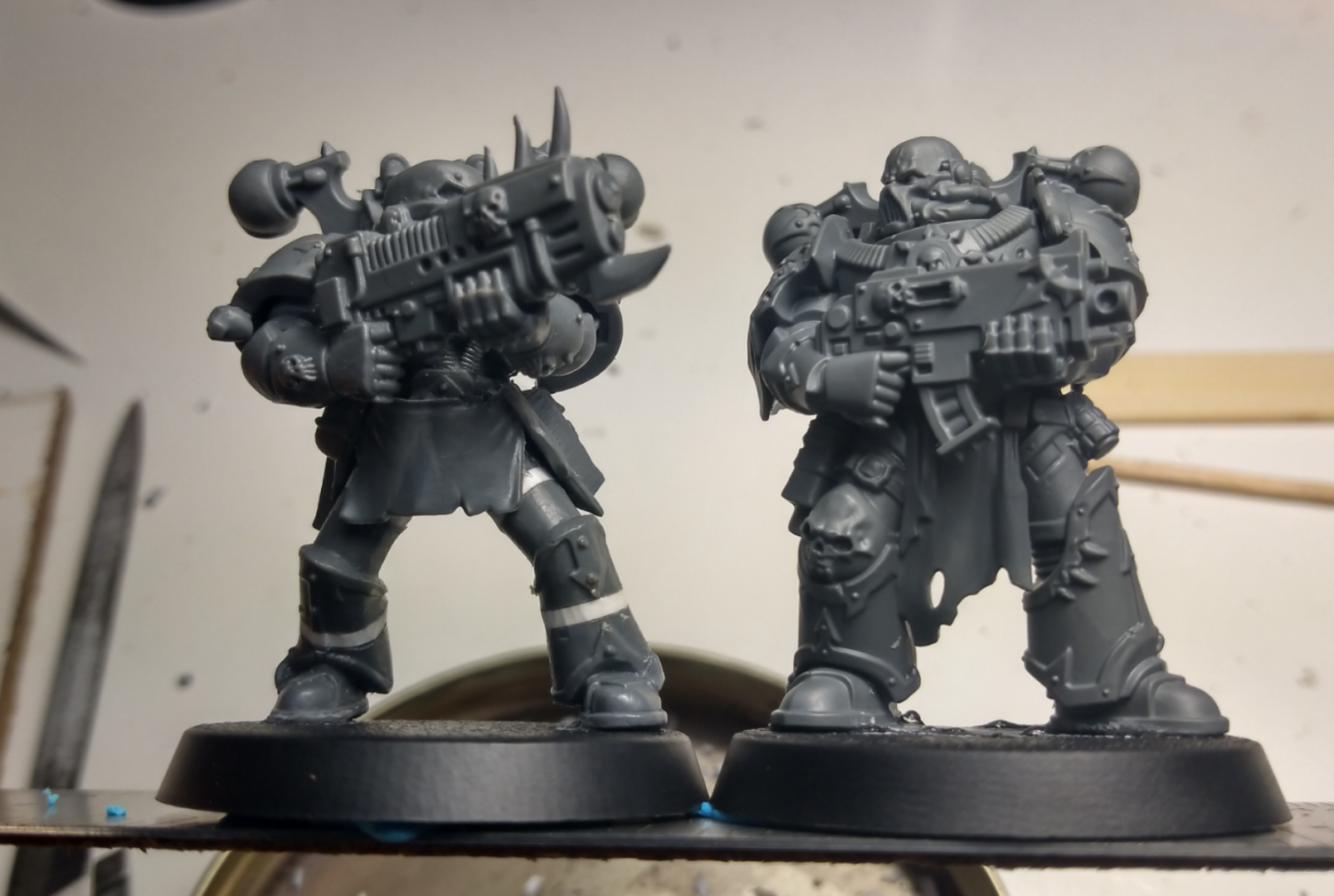 While working on one thing I'm always thinking of something else. My brother is deep into building and painting a sizable Warhammer fantasy chaos warriors army... Which means there are a plethora of chaos warrior bits available.

I wish chaos space marines had storm shields... Because these left over chaos warrior shields would be awesome for some 40k Iron Warriors Breacher style squads.

Some of the helms might be pretty good on mk3 armour. I'm definitly "anti-horns" with this army tho.

Lots of left over nasty melee weapons too... Damn I might have to start working on some of my IW soon!

You could run breacher squads as counts as Plague Marines to represent the extra durability, or if you wanted a special breaching unit with some sort of special weapon Rubricae could also fit the bill.

If CSM have storm shields I don't want them to be cross shaped but more like a triangular shield with spikes and Chaos iconography.

If CSM have storm shields I don't want them to be cross shaped but more like a triangular shield with spikes and Chaos iconography.


I was specifically thinking of the "tower shield" style chaos warriors have presently.

That would be awesome to use in an army in lieu of the Horus Heresy Breacher Squad shields since they have had time to get tainted by the Warp. Note that it would fit abit better after I trim off the arm built into the shed.

It looks good to me. I always liked the idea of a breacher marine in the 40k Chaos style.

Note that it would fit abit better after I trim off the arm built into the shed.


Looks good. I used chaos shields on my IW to represent the extra T or ++ save conferred by the mark of nurgle or Tzeentch.

Back to x IRON WARRIORS x