52 replies to this topic

I'm preparing the presentation of the submissions. It was an idea that occurred to me after the challenge ended. I should have them ready this weekend or early next week.

Any progress on this project?

I'm hanging out to share the pictures of my entry

No progress unfortunately. I sent an e-mail to all of the entrants with an explanation (of sorts) and a request.

No progress unfortunately. I sent an e-mail to all of the entrants with an explanation (of sorts) and a request.

Thanks for the update and the email. I'll see about taking some more pictures in the next couple of days

Back in June we asked members to submit images and background for their Legio characters. We received a number of submissions from members, so now it's time for you to pick your favorite.

The Legio battle-brothers shown in the images were part of a detachment deployed to Demaras Tertius. Each was assigned a code name and the images below are labeled with those code names (code names are above images).

Please pick your favorite, by whatever criteria you decide to use.

Polling will last through 31 October, after which the members' favorite will be announced (along with some other things related to this challenge).

Some insane talent there, congratulations!

I agree with Thørn some bloody good work there. I was tied between Jason and Achillies but Achillies has to take it as I am a sucker for battle damage and weathering.

Fantastic work on all of the entries!

I am deeply impressed by all the models!

Excellent submissions guys and gals! An interesting variety of loadouts and poses too, which sums up the diversity of this place perfectly. I just wish there were some more entrants, maybe next time.

No harm in making one anyway to add to the ranks of Legio personas people have submitted over the years.

Maybe do one as a new IFE V vow.

By the throne, some of those are amazing.

That sword on Perseus, in particular, is incredible.

Can't decide where to cast my vote - this will take some serious deliberation!

They'd all make one heck of a squad though!

I'm loving the codenames, as an aside.

Well, providing submissions is an ongoing effort. I suppose I need to get the Legio B&C entry spruced up a little to provide a place for everyone.

I'm loving the codenames, as an aside.

Well, some of the submissions made it fairly obvious who the member was; and I didn't want anyone to vote for or against a model based on the member, so I had to come up with some codenames. My original plan was to use the names of Trojans killed by Achilles in the Iliad, but I figured no one wanted to be named for the red shirts.

First, congratulations and appreciation to all of the members that submitted miniatures for the challenge. The reward for submitting a miniature is the inclusion of that character's parent Chapter in the semi-official Legio Bolter & Chainsword kill team for the Shadow War: Zombie Apocalypse campaign pack.

There can be only one winner, though, and by popular acclaim, that honor goes to...

The reward for being the winner is the honor of the Shadow War: Zombie Apocalypse kill team being led by a sergeant from his character's parent Chapter (which, given the fact that he's a Black Shield, makes things interesting). He will also be receiving a Bolter & Chainsword patch and a custom deck of cards.

An honorable mention goes to Brother Adlai, code name "Jason," submitted by NovemberIX for the inclusion of an honour shield.

The reward for this is that his character will be the second-in-command of the Shadow War: Zombie Apocalypse kill team, leading elements of the kill team in certain scenarios. He will also be receiving a Bolter & Chainsword patch.

Dossiers on each of the entries will be posted soon (once I have each entrant's go-ahead).

A worthy winner Kizzdougs out of some great entries! Big well done! Love the knee pad especially and he has that weathered look I love

As for me, I am really happy with 2nd as I have been (and will be for a bit longer, unfortunately!) out of the hobby for a while. Really enjoyable challenge, thanks Brother Tyler for organising.

A well deserved congratulations to Kizzdougs for his winning entry, the battle damage and kitbashing was superb on that one. As I said in my earlier post, the sheer variety and high quality of the modelling and painting in the submissions really did help to display the diversity of the board and our styles.

Might as well claim which one was mine as we wait for the dossiers, the given codename of my model was "Theseus":

I decided to go down the classical route of using a Bolter and Chainsword loadout, using the Deathwatch kit I have (and intend to use to make a 10-man Legio squad in the future) I hadn't painted properly either for around a year so it was nice doing this challenge to restart my hobby a little and challenge with the art of edge highlighting black and painting red. I'd say it's a good improvement over my last Legio miniature I did 5 years ago... And for those of the Liber persuasion and have been there for many a year, I decided to finally make the Liber Heraldry Department emblem exist in painted form on my Legio mini's leg.

Once again, congrats Kizzdougs and to my fellow entrants on a job well done. I look forwards to seeing more Legio minis in the future from everyone else, hopefully.

First off, Congrats to Kizzdougs on his superb entry! Again, kudos to everyone on the wide range of entries! Like brother Tyler said, Jason was my entry, the image below links to a more in depth post about where I sourced all the various parts since Adlai is just one giant kitbash. I look forward to the profiles and to see what inspired everyone's design choices 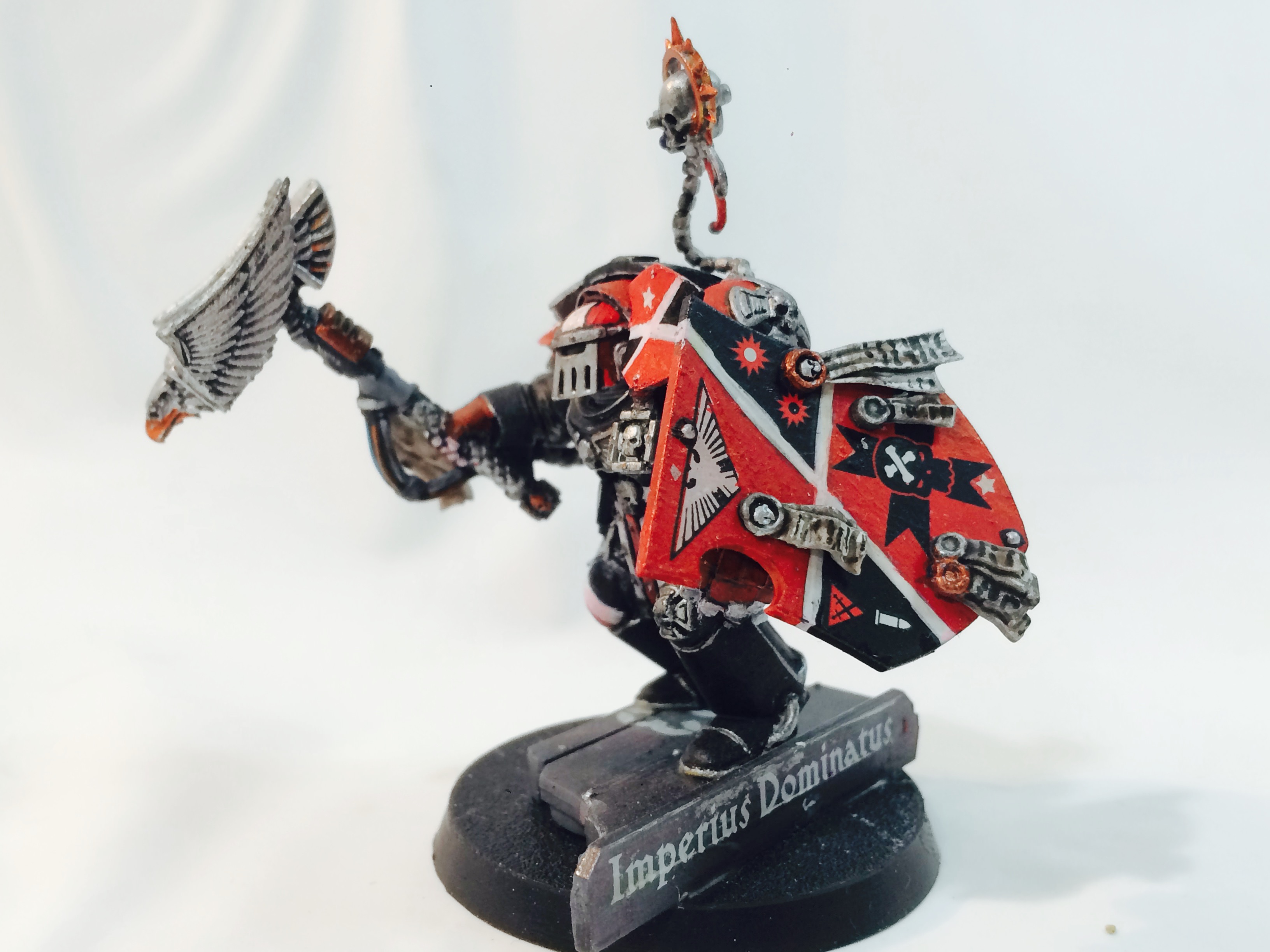 Congrats to Kizzdougs, a well-earned victory there brother!

My entrant was codenamed "Heracles", a codename which I can guarantee is going to make it into his personal history as soon as I figure out how to make it fit.

Perhaps appropriately, he's from my DIY Chapter the White Hawks, who love a good test of skill.

Please forgive the large picture, I'm having trouble shrinking my pictures right at the moment.

I think I burnt the wrong incense when last appeasing the machine spirit.

Thanks for the kind words, everyone


We need Shinzaren to make a corresponding model at some point, Ace.

And I agree Kizzdougs, I am very much looking forwards to eveeyone's dossiers.


We need Shinzaren to make a corresponding model at some point, Ace.

I'm hyped for the dossiers, for certain.
I need to know if these marines could have been a squad in the Legio, for one thing - maybe that can be where these codenames come from.

Each entrant provided some background material on their Legio battle-brother, as well as on the battle-brother's parent Chapter. That information is provided here for you in brief dossiers.

Absolutely fantastic - quite the showcase of personalities at work here!

Very enjoyable reads all around!

That said, Cambrius you madman, I specifically avoided mentioning the Typo Wars and their particular brand of weird in-jokes!

Now I just need to work out how Acemund earned the codename 'Heracles', 'cause names like that surely don't just get handed out for no reason.

That said, Cambrius you madman, I specifically avoided mentioning the Typo Wars and their particular brand of weird in-jokes!

How could I not include one of our finest hours, especially since I painted the Liber Heraldry Dept emblem on Cam's leg?

That background was a joy to read, Cambrius. Brought back many good memories.

Also tagged with one or more of these keywords: Legio Bolter & Chainsword, Chronicles of the Legio, Legio mini-me