There are some battles that cannot be won by the valor of mortal men alone.  Some conflicts are so terrible, and must be pursued in the face of such overwhelming odds, that victory can only be seized through the united might of the Chapter's greatest heroes.  In such dark times do the Master Armorers of the Grey Knights descend to the Chamber of Heroes and awaken the Chapter's Dreadnoughts.

There are few more awesome sights than a Dreadnought in full fury.  More than twice the height of a man it stands, armed with the most fearsome weaponry the Grey Knights can provide, its furnace roaring with the joy of battle, and the ground shaking with its every step.  As the Dreadnought advances, enemies scatter before it, their fire ricocheting off its adamantium hide.

Yet it is not the Dreadnought's armor, nor even its armament, that make is such a deadly foe.  That honor goes to the warrior that guides the goliath; a warrior long ago brought close unto death by grievous wounds, and who must now forever dwell in the Dreadnought's cyborganic sarcophagus.  Only the mightiest of the fallen are interred within a Dreadnought.  To fight a Dreadnought, then, is to fight no mere machine, nor merely a great hero of the Chapter.  It is to attempt nothing less than the defeat of a great warrior whose mortal frailties have long been set aside for a mechanical form as untiring and unyielding as his own will.

Such is a Dreadnought's wealth of combat experience that, once fully awakened, it can adopt any role required by the battle at hand, from long-range fire support to spearheading assaults.  Indeed, amongst the Grey Knights, it is far from unusual for a Dreadnought to serve as a secondary commander, holding authority over the main strike force, thus allowing the Brother-Captain to direct efforts elsewhere.  This should come as no surprise, for many Dreadnought pilots attained the rank of Brother-Captain, or even Grand Master, before their internment, and relish the opportunity to apply their strategic acumen to fresh campaigns.  Those battle-brothers fighting under the gaze of these venerable Dreadnoughts are sure to redouble their efforts.  To take to the battlefield alongside such a warrior is to walk in the shadow of a living legend and, in such company, a battle-brother will not be found wanting.

It might seem strange that Dreadnoughts are awoken at only the direst times.  Yet the Grand Masters of the Grey Knights know that to depend too heavily upon these ancient heroes is to dishonor the gift of their service - for have not these battle-brothers already died once for the Chapter?  And so, when the dark times have passed, the Dreadnoughts return to the Chamber of Heroes, there to slumber in the darkness, dreaming of battles yet to come...

This thread is dedicated to the revered Dreadnoughts of the Grey Knights Chapter.   Members of Titan are encouraged to post pictures of their own Dreadnoughts, provide their own fan-made fluff for them, and, once 9th edition is released, to share their preferred Tactics, Tips, and Tricks related to using these ancient warmarchines in games of  Warhammer 40k.

EDIT:  Please post pics of your completed models here; Work in Progress photos can go in the Halls of Titan thread, instead.

Here is a picture of Arcturus with a ranged load-out:

They look really cute. I love those models!

Brother Fortis of the 3rd Brotherhood 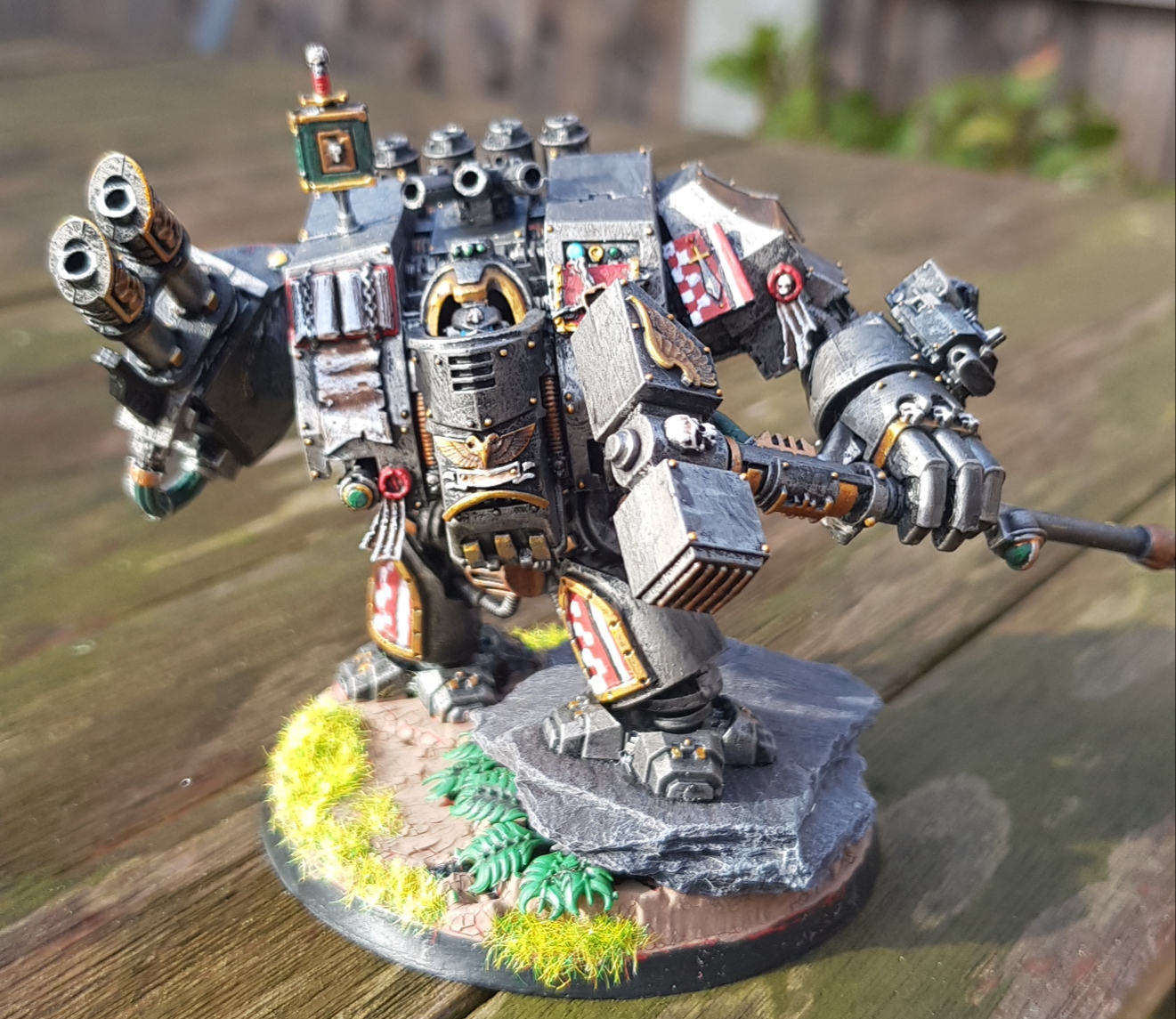 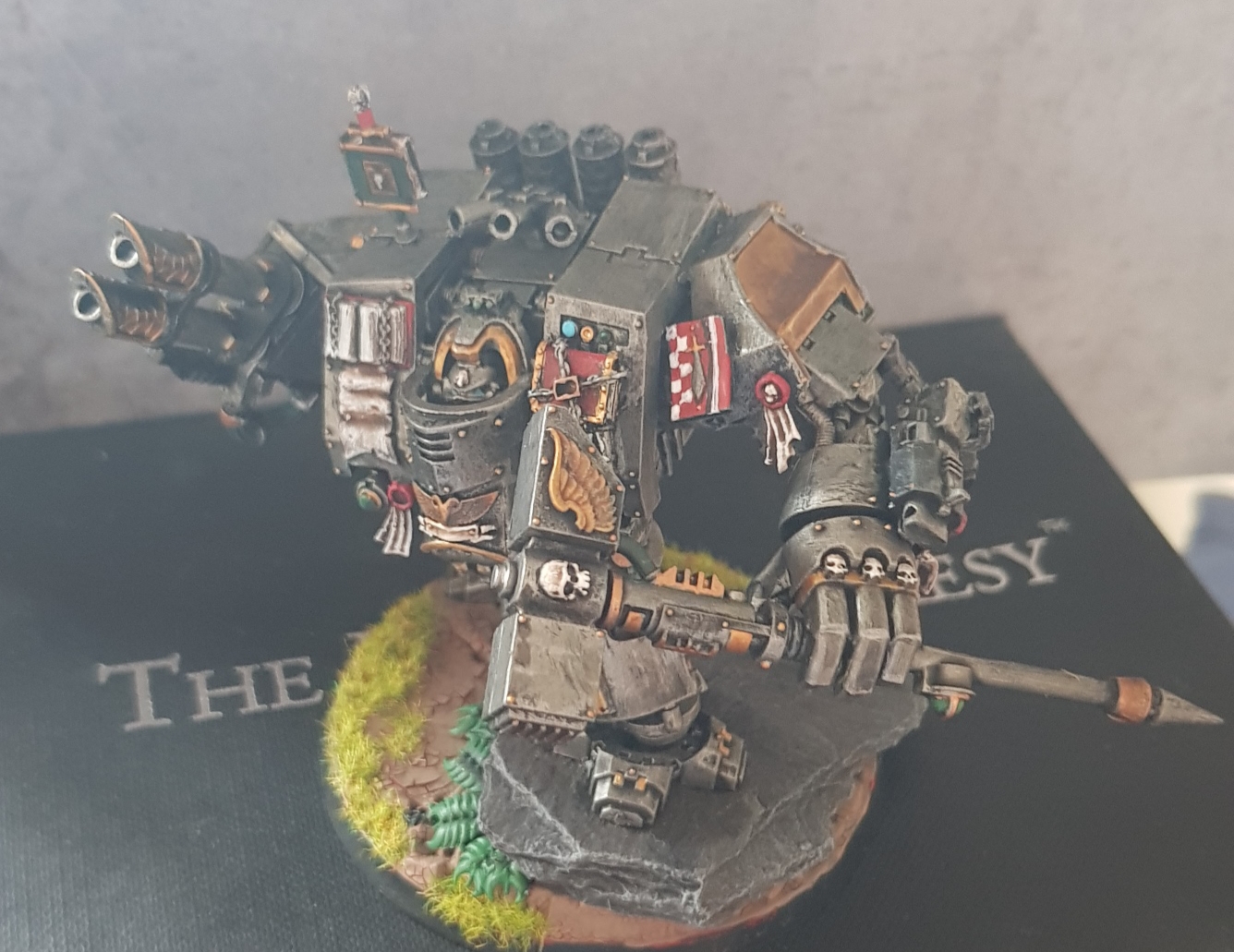 I appear to have misplaced my doomglaive... Quickly painted up a regular dread arm for a submission aha

I appear to have misplaced my doomglaive... Quickly painted up a regular dread arm for a submission aha

I like the subtle difference in color scheme - what washes did you use for the gold bits?

As promised here are some pictures of the Venerable Dreadnought that I have acquired/saved. When I first got the dreadnought, there were a lot of detail that needed to be fixed - the silver bits on his legs, silver trim on the frontplate, the skull on his missile launcher as well as the accents, missiles needed to be colored, cabling was the wrong colour, skulls on front-plate were the wrong colour and the base incomplete. As you can see there is a bit of splurges of colour, but I have zero idea what colour his chassis is - mechanicus grey perhaps? Either way, when I find out what colour it is, I'll fix the splurges. Will magnetise him as well, the parts that you see in the picture are friction fit. But still happy how he turned out, and the fixes weren't a bother either - especially if you consider you don't see these forgeworld dreadnoughts around anymore. Pictures in spoiler.

Finally finished this badboy. Presenting, Mr. Doomglaive Dreadnought! Of course I still need to do his base, but story for another time! Pictures in spoiler.

Is that a regular terminator head in there?

Indeed it is. Had to waste 3 heads just to get those damn ones to fit. Not recommended.

Indeed it is. Had to waste 3 heads just to get those damn ones to fit. Not recommended.


I had the same problem when I made my ven dread (👆 up there somewhere). I ended up using a regular Strike helmet and the ven dread collar bit. Respect for getting the termite head in there.

So turns out, I didn't actually have the doomglaive weapons. So I've bought and painted up the blood angels librarian bits like others have done.

Gave me a crick in my neck lookin' at it though

Thanks for the kind words! Also don't suppose any of you know how to upload higher res photos on mobile?

Did you post your photos directly from your phone? If so, you might try transferring them to your pc. It takes a little more time, but, I've found photos easier to manipulate for quality, position, etc. there.

Skywrath, where did you get the Inquisition Dreadnought chassis? I've been looking for it for ages.

I finally nabbed one! The chassis was $80 on eBay, but I did it anyway. It just arrived a few days ago and I was so excited to paint it!

I got mine from a friend who quit the hobby a couple years ago. All he asked for it was for me to buy him lunch.

It appears I made a pretty good bargain!

I absolutely don't need any more dreadnoughts so I'll share.

But just seen one on ebay pretty cheap. Paint looks thick, so will likely need stripping.

Also tagged with one or more of these keywords: Grey Knights Chapter, dreadnoughts, showcase