Corruption of Purpose: The Alpha Legion 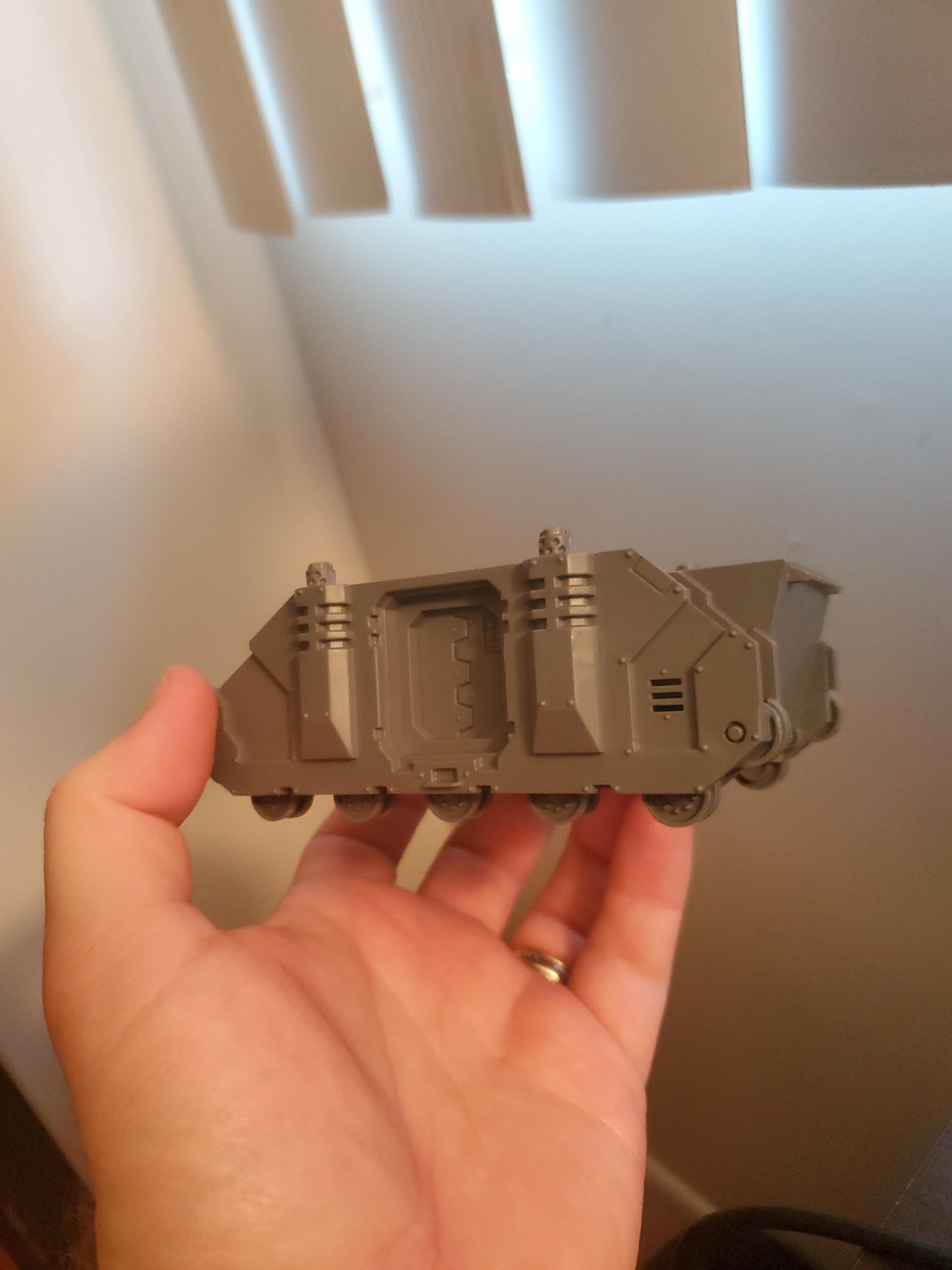 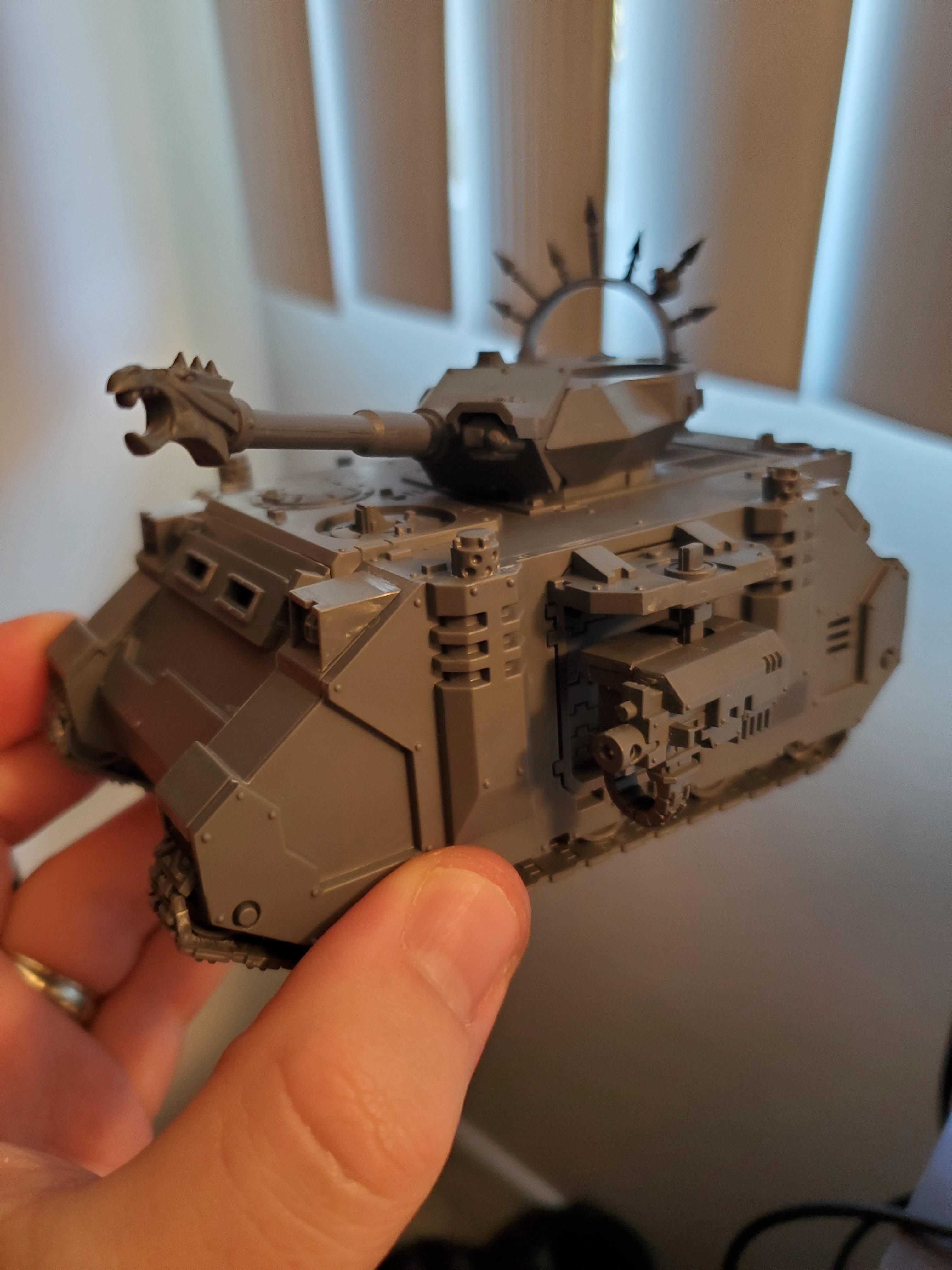 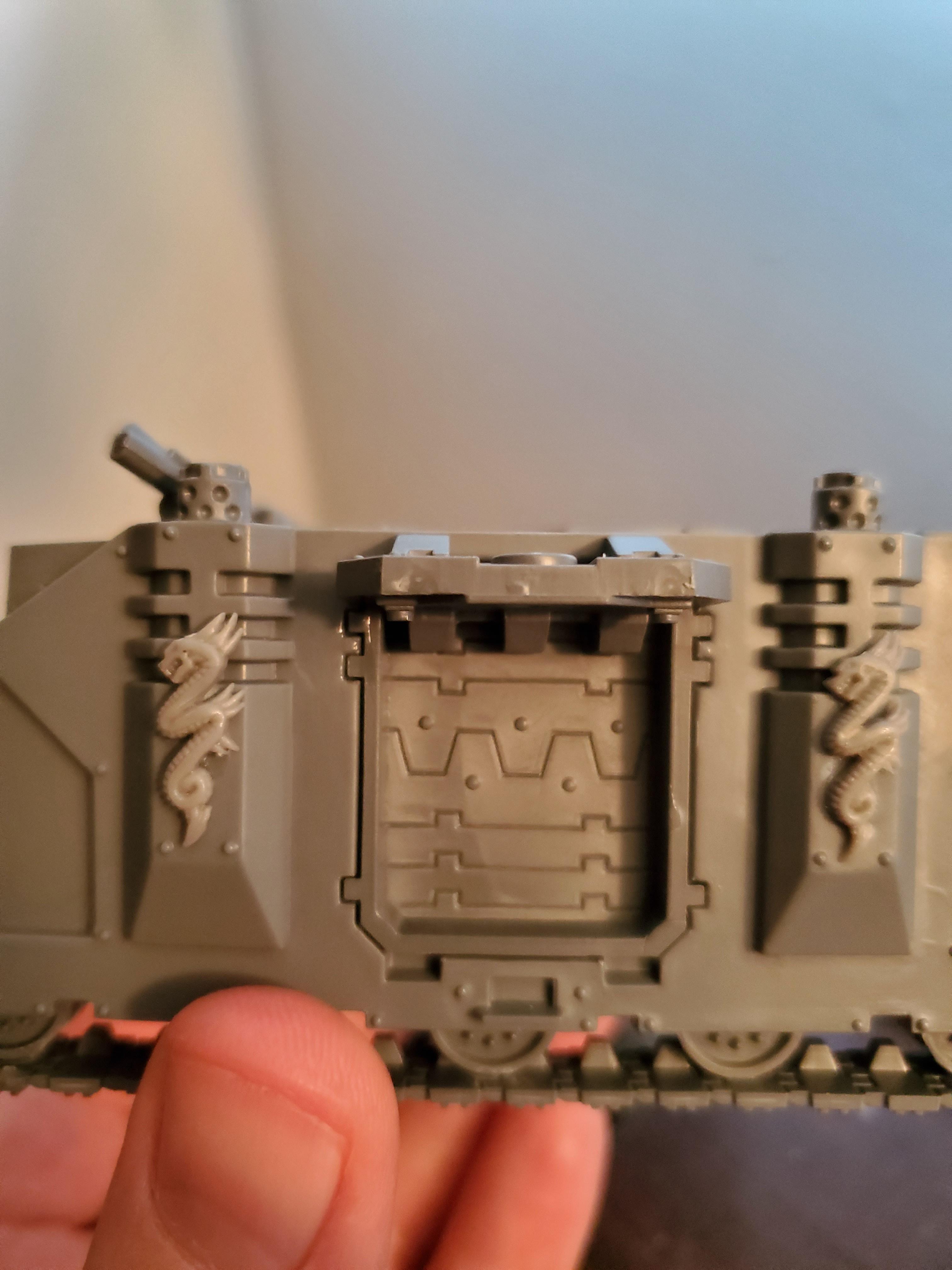 Progress update! Base colors are down, just blocking in the blue now. That's Kantor for the base and Caledor Sky for the layer. The green is Caliban Green...I just realized I've never posted pics here of the updated scheme and what happens with the green.

You'll have to wait and see! 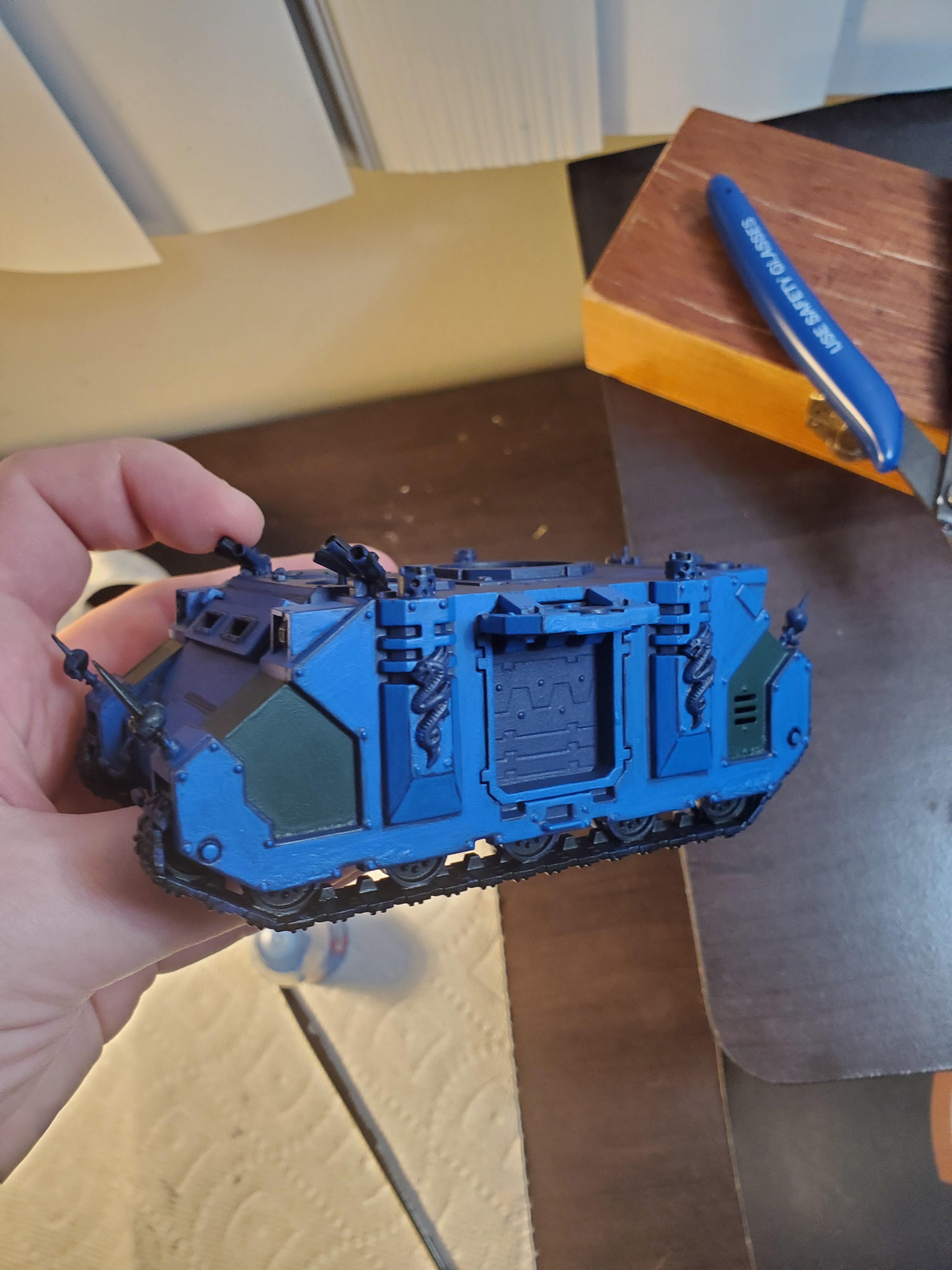 Work has slowed, but is still going. The turret and hull and now mostly blocked in:

Love that blue. Is that a GW paint?

So here's the secret of the green panels:  scales!

Step One: You already saw the blocked-in Caliban Green.  It gives us a nice dark basecoat that goes on well over the black primer.

Step Two: Mulitple thin coats of Warpstone Glow.  I've always found this to be a really thin paint so when I say "multiple" I mean, like, four or five.  Duncan would be proud. 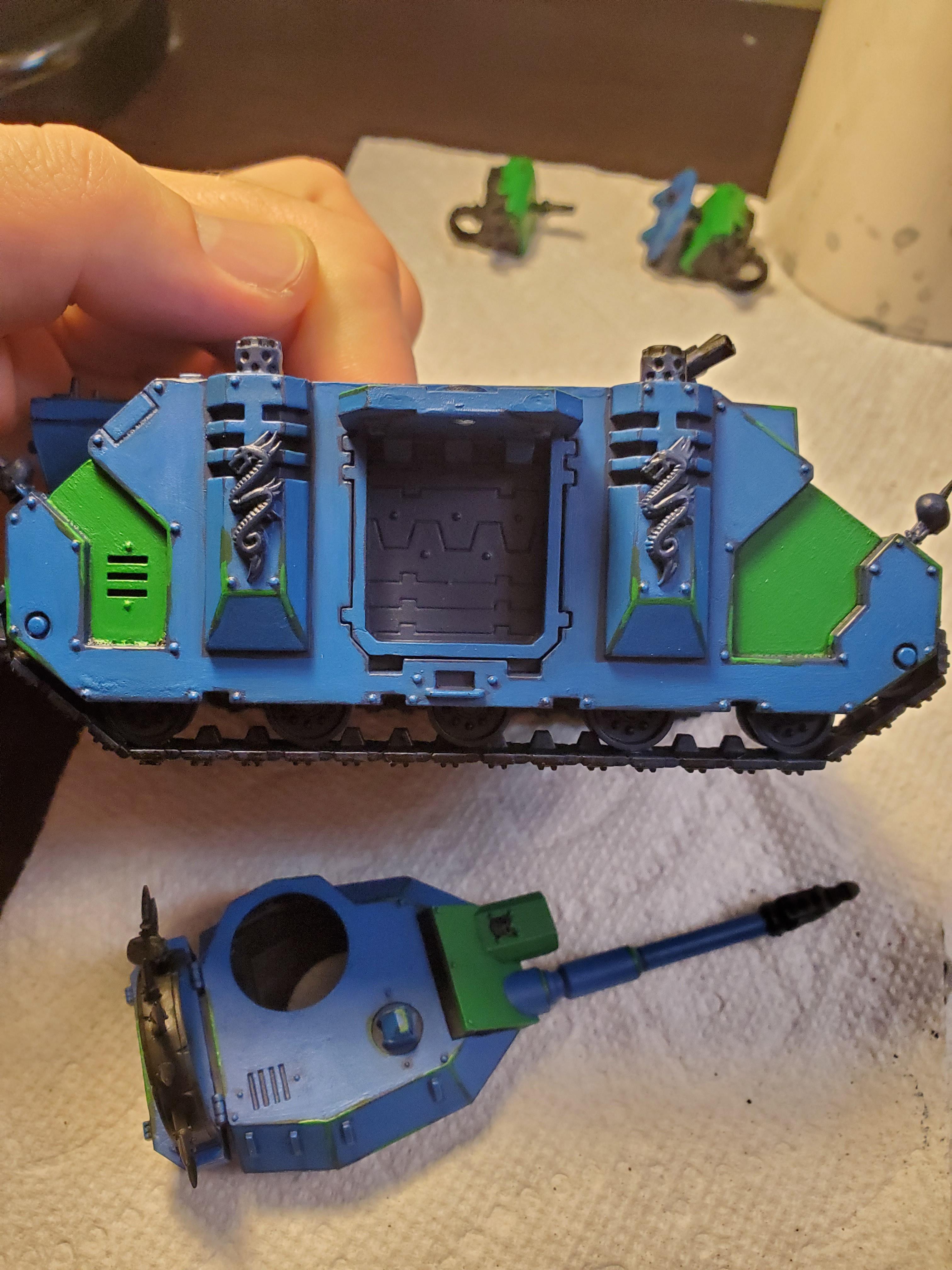 Step Three: Thin lines of Abaddon Black drawn in a repeating diamond pattern.  Precision is only not important here, it's actually antithetical.  Perfect symmetry and straight lines are rare in nature, so your pattern coming out a little wonky tricks the eye into making it look more real. 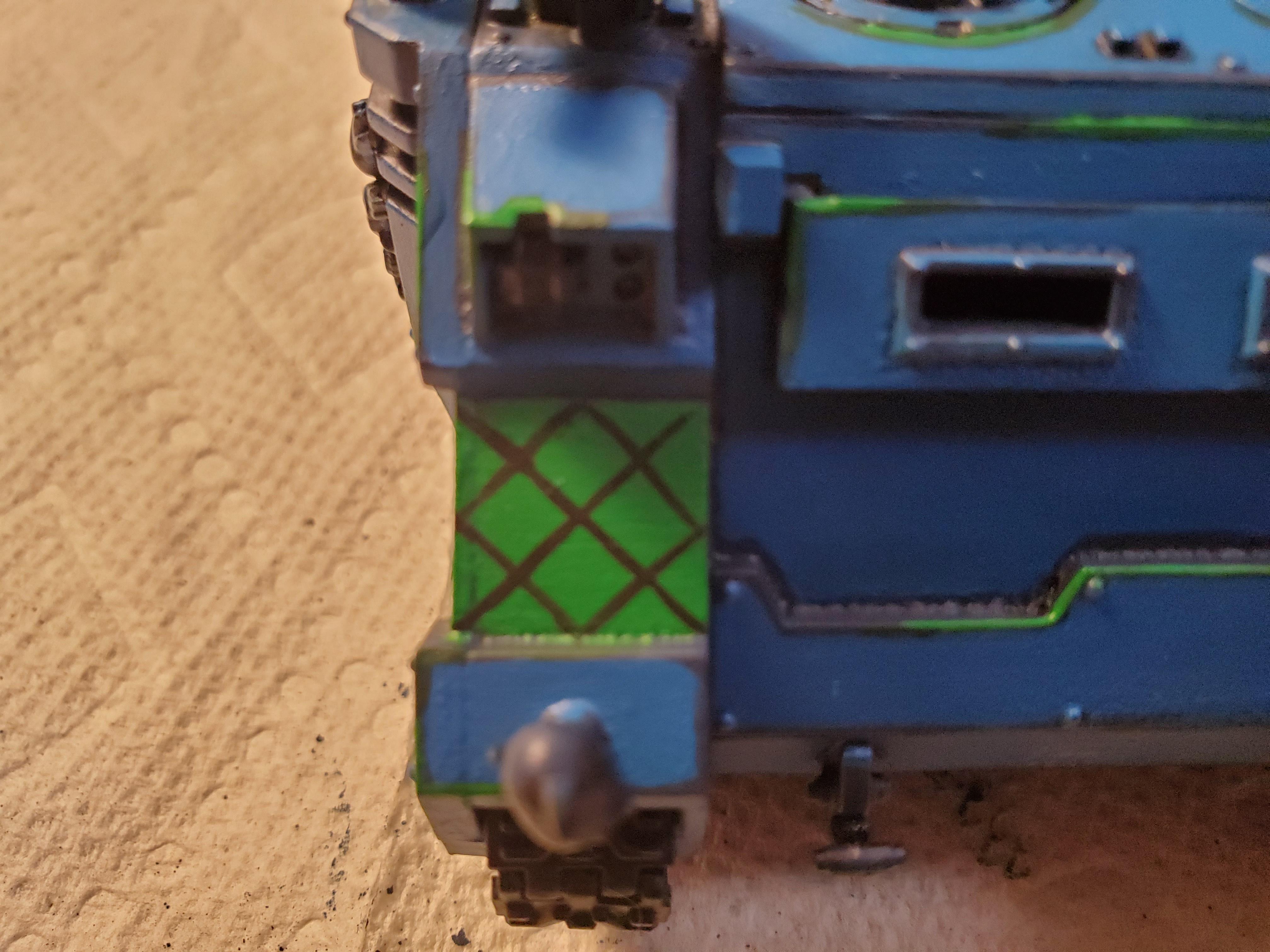 Step Four: Put a small carrot of Caliban Green into the upper angle of each diamond.  This creates a shadow effect for the scale's overlap and gives it a sense of depth. 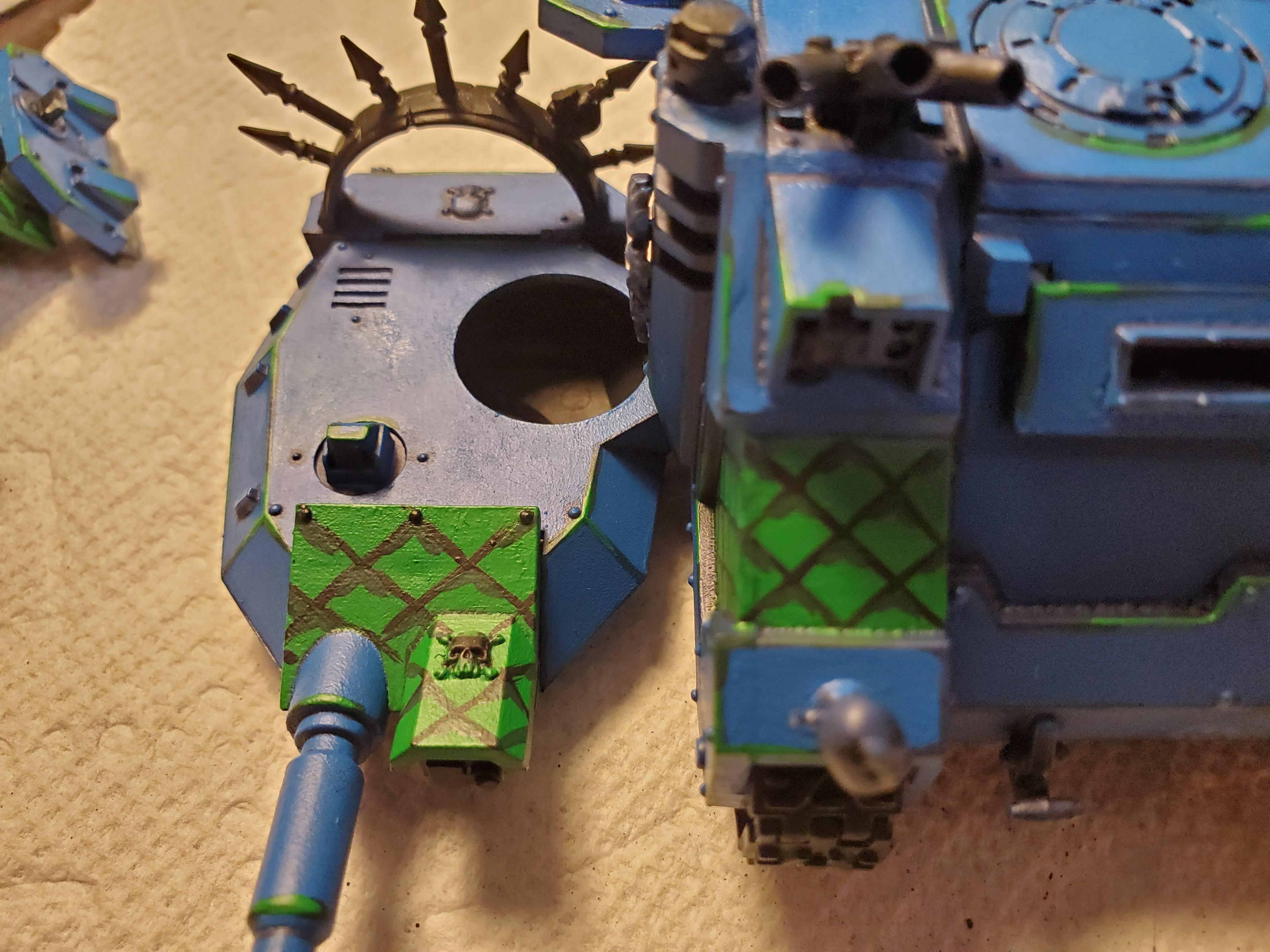 Step Five: Put a small carrot of Moot Green into the lower angle of each diamond.  This is in effect an edge highlight that reinforces the 3D look of the scale pattern. 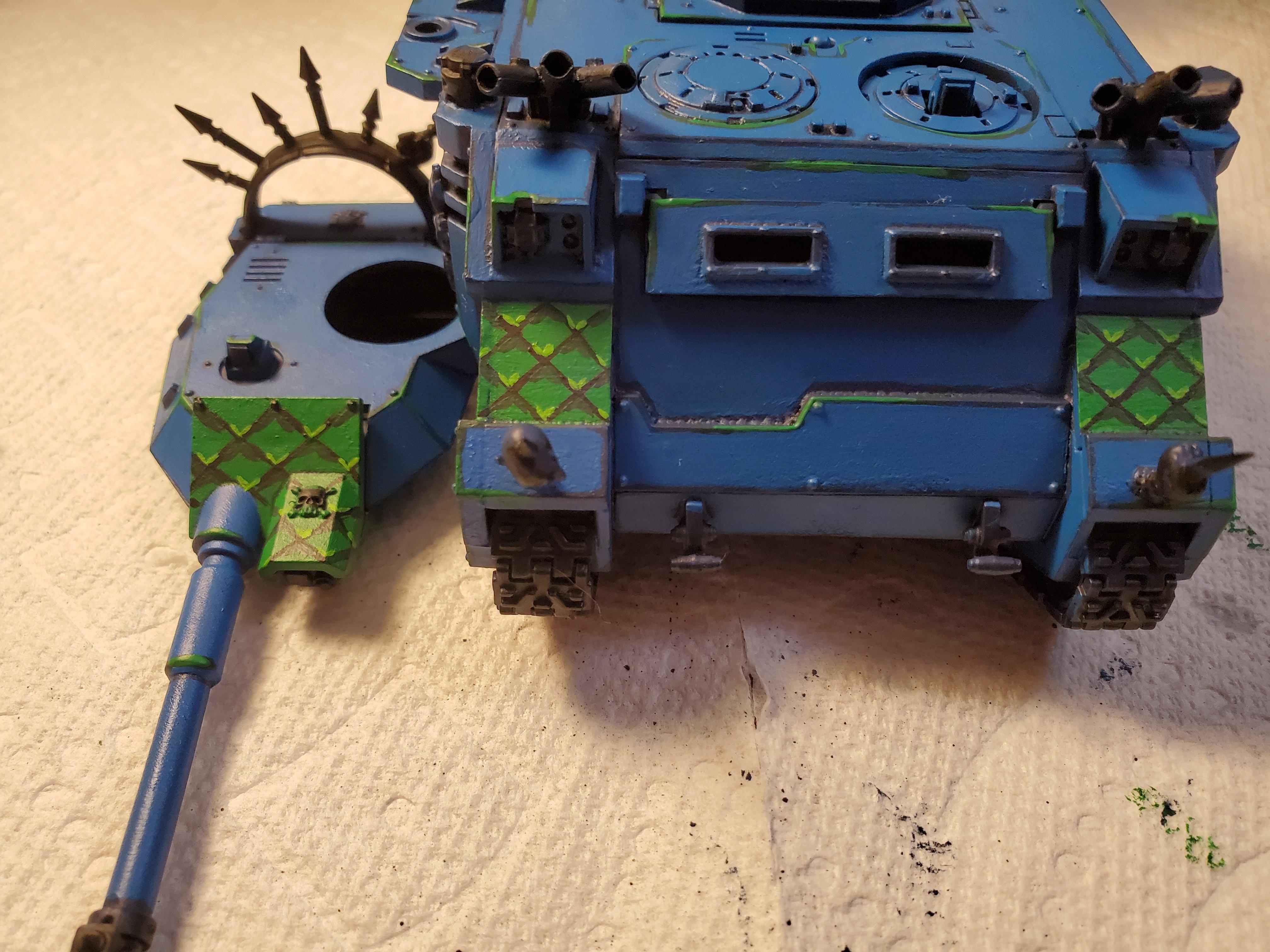 All done!  I've been putting scale patterns in the recessed armor sections of my tanks and all of them gun mantlets/casings.  So far this is the fourth tank I've done for this army -- the others being two Rhinos and a Land Raider -- and all have them in the same or similar places.  I've also done this on a few pauldrons of my Chaos Marines (noticeably on my Dark Vengeance Chosen) and it comes out really well in my opinion. 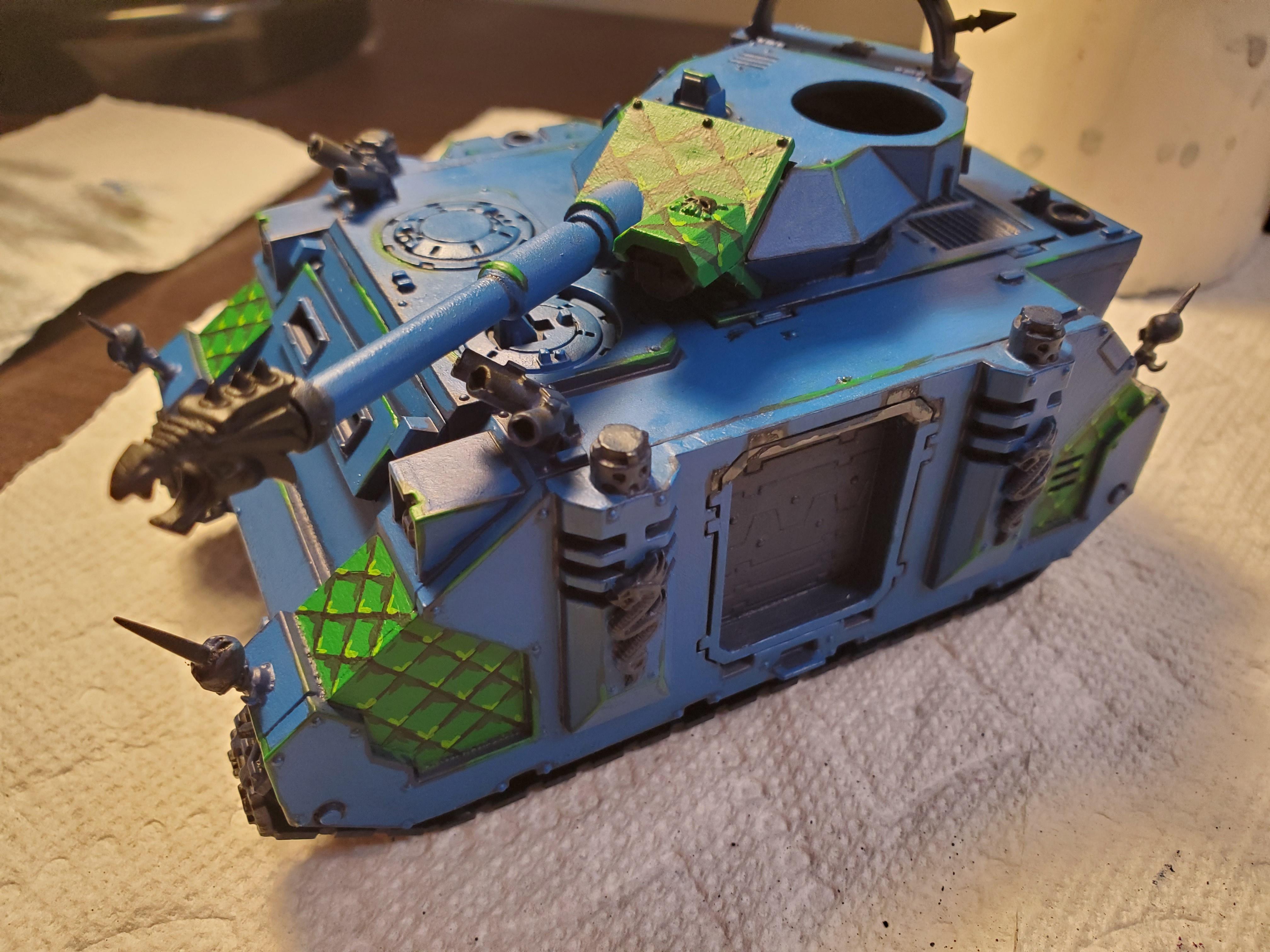 On a whim I picked up my first box of the new multipart CSM.  I have a SC! and used the Marine squad therein to convert new Berzerkers so I had some idea of what to expect in terms of sculpt and convertability, but holy cow these blew me away.  The posing is so characterful and despite the scale change old parts fit pretty well -- plus there's some compatibility with other parts of the new Chaos range too.  Specifically, I used Raptor arms for my Champion and I made two guys with chaincannons (one using the autocannon carrier from the SC! and another using a joe from this box).  If we do end up getting the rest of the range update that was indicated in the Big Secret Leak a while back, I can only imagine those kits will be just as awesome.

In any case, here's Sergeant Otheum, commander of Venator Rifle Squad, in his old form and his new form: 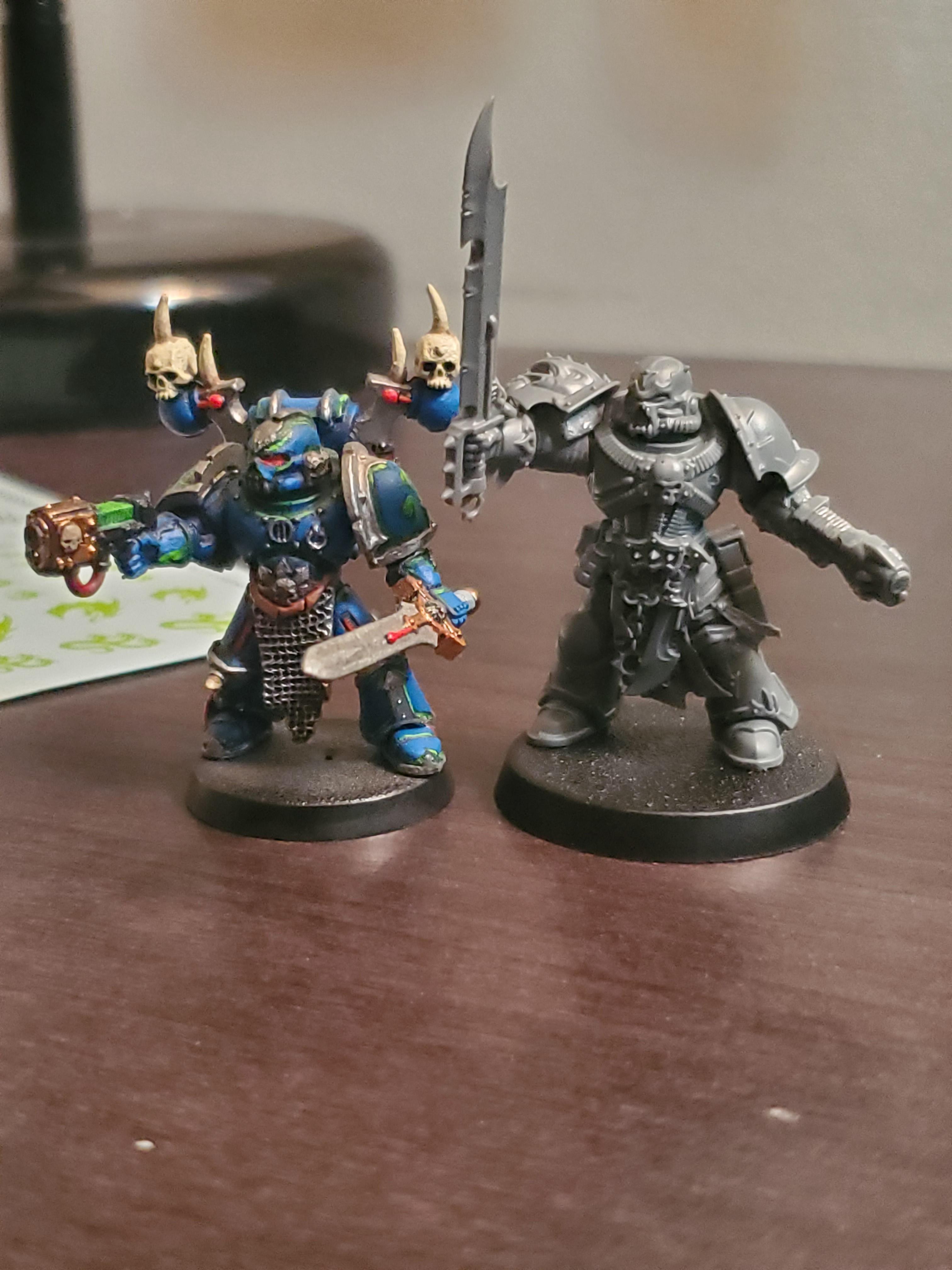 Can't wait to get some paint on him, and no, I haven't forgotten about the Predator; it's not quite finished yet.

I don’t know about the big leak but yea those updated kits are amazing. I redid all my troops with them. And honestly it always shocked  me GW did not want to help them out with rules updates, but I kept putting more together because they just look so good.

Also tagged with one or more of these keywords: Alpha Legion, 40K, Heretic Astartes