Hello all! I've rather made B&C my home over the last few days. I used to post frequently on Portent, which then became Warseer, but ever since it was down for so long in 2016 I migrated first to Dakka Dakka and more recently to B&C, which feels more like Portent than any other site I've been on since (this is a good thing).

Anyway, I am currently working on a stupidly large Imperial army (and occasionally on its foes). This will eventually comprise the following:

Oh, and some Knights too. Possibly three. Not sure yet.

Anyway, I know you all want pictures but I need to retake lots of photos and try to migrate stuff from Photobucket to elsewhere for photo storage purposes, none of which I can do while at work...!

At the moment on my painting desk I have a Radical Ordo Xenos Inquisitor and a Deathwatch Start Collecting. This thread will, I hope, be a repository of completed and WIP/PIP work chronicling the collection of the above ridiculous force, which will eventually total something in the region of 30,000 odd points.

Always loved your stuff! Can't wait to see it over here

Looking forward to seeing pictures of all this goodness.

So I'm having some issues in that the photographs I have taken are stuck on the camera; the data cable that is supposed to enable me to transfer the images to my PC for editing and display, here, isn't, er, transferring.

I shall make the appropriate offerings and obeisances to the Omnissiah and report back forthwith. 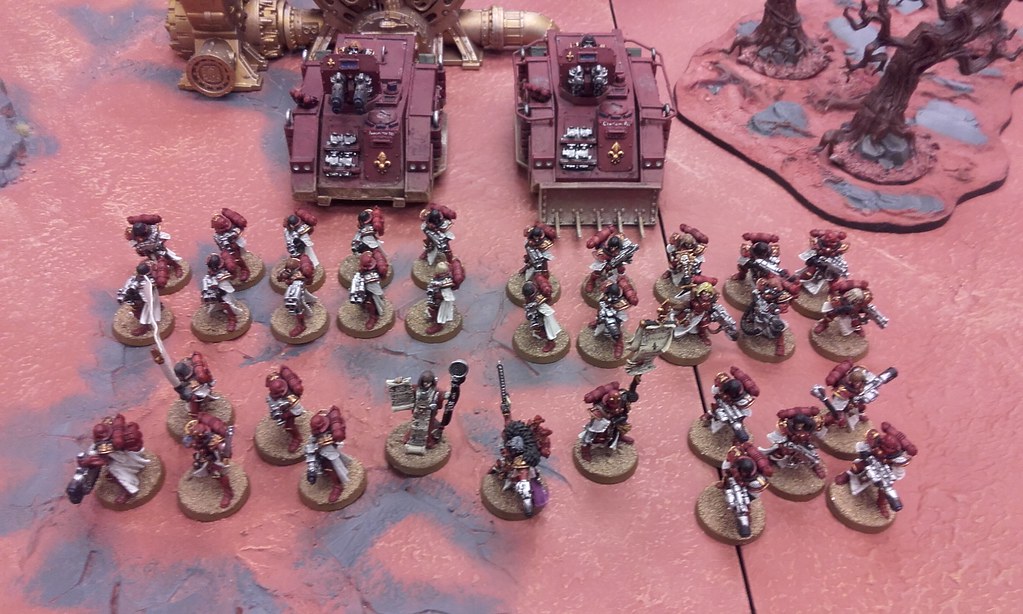 Nice colour scheme and nice use of the old school (ok even the 'new' Immolator is old now!) Immolators. Praise to the Omnissiah!

++AI Log++ ++How not to paint Citadel Minis general WIP++

Thanks! I'm putting this thread on hiatus until Flickr gets its act together and enables me to edit images OR I can get a data cable that works for the D3300 camera my partner has.

Hundreds (and hundreds) of figures to show you and no easy way of doing it. :'(

Just get one of those things that allows you to connect an sd card to your PC.

That is the current plan; it however hinges on having money. I hope to be posting photos soon though. Soon!

In the meantime I finished a Start Collecting Box of Deathwatch and dug out my two squads of Deathwing to paint up as Angels of Redemption for my putative Deathwing army.

I'm fed up of this PLOG being quiet.

Time to show you all what I've just finished:

Going to properly dig into the whole photos-and-upload-to-this-plog this week. I've got a good few days off work so expect some rapid-fire updates. In the meantime, enjoy the mean visages of Nuriel and his Marines as they prepare to crush the traitor beneath their ceramite boots.

I remember a previous iteration of this thread way back on Warseer a number of years ago.