76 replies to this topic

Great stuff, as usual! Love the retro gear, did you cast the ISM-helmet?

Are you sure this is an ISM helmet and not one of the forgeworld MkVI helmets?

Sure? No. It probably isn't the ISM, not a single visor.

With all the single models you're showing, do you have any groupshots DR?

Sorry, knew there was something else I needed to reply to, the helmet is just one of the FW mk6 helmets, I think it was one from the raven guard furys set I got but it is pretty much the same as a standard mk 6 and nothing special. It was also a test model and the first of its unit, I am hoping to have at least 5 done by the end of the month but I am a very slow one.

May I ask if this is an accurate depiction of how you truescale, going by the description and pics?

2)2mm at the pelvis joints to thighs, without cutting the armour

Take it as a compliment, but I honestly can't spot the signs on the beakie at all.

I have actually been revisiting and adjusting how I do it somewhat and I came to the conclusion that making the feet bigger wasn't the right thing to do, this one was pretty much done similar but I made the legs taller by cutting them at the lower legs and raising them by 2mm. but other then that it is somewhat the same. I can put up some pics in a bit for comparison and also to show the raised parts.

[EDIT] pictures added, I didnt want to make the marine look bigger then primaris so the scale is slightly shorter but I am happy with the result. I have also upscaled the cataphractii praetor with a similar method but simply made adjustments to the lower legs and upper waist, since I never understood how terminator armour made space marines bigger, always figured it was just supposed to be bulkier.

Damn the old boltguns look tiny next to that rifle......

Thanks! How'd you get such a smooth finish on the legs?

Nothing really special there just milliput which was scraped and sanded done. I could do a tutorial on the next pair I work on but once I finish a pair I make molds so I can cast duplicates to make it easier to do squads.

I'd love to hear your mold procedures too!

https://i.imgur.com/YxV2bFv.png <-This is what the Warhammer 40k setting is about.

Always been a fan of bionics... 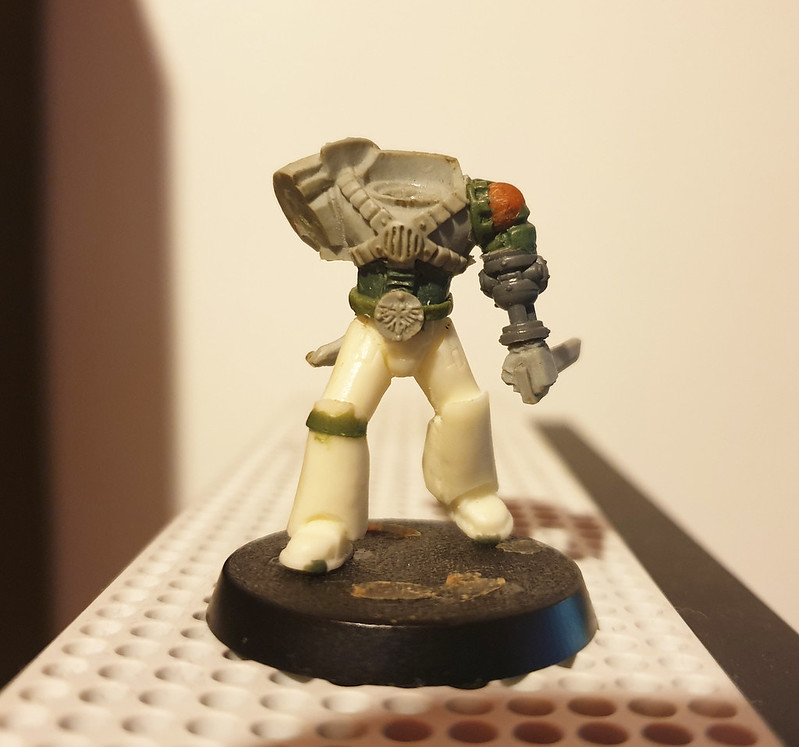 Also tagged with one or more of these keywords: #consecrators, conversions, successor, primaris