And my ancient is done if we don't look at the missing hand attached to his banner. 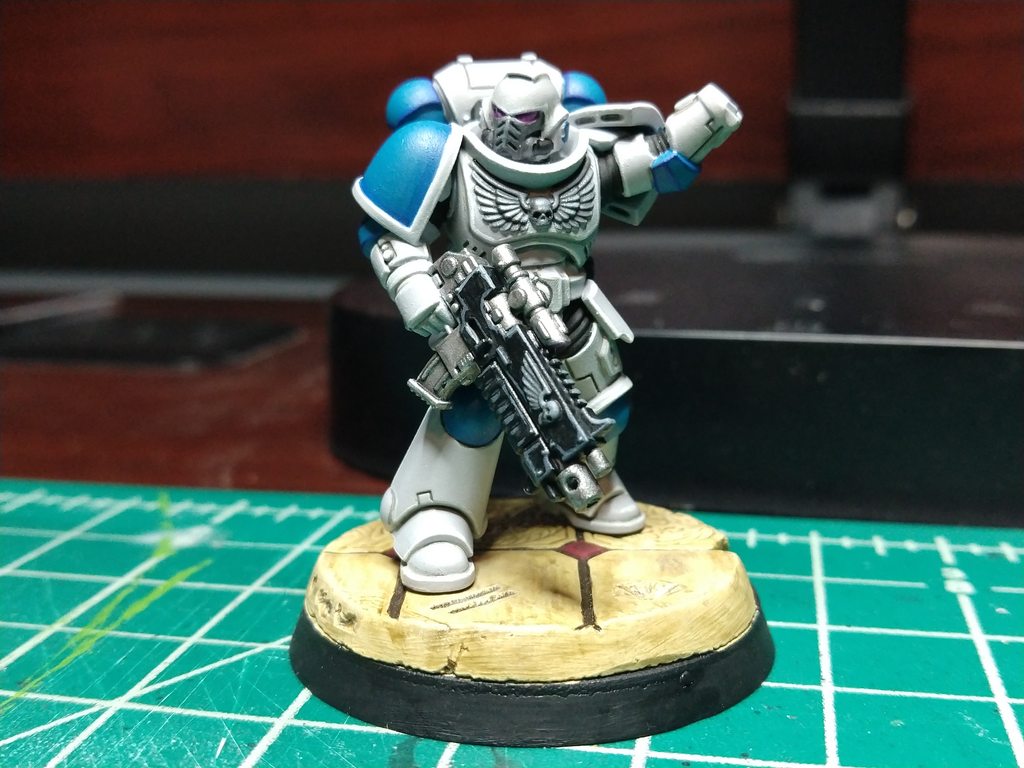 I airbrushed his banner and oh man I'm loving the airbrush. I use three blues in this scheme. A turquoise base and two darker blues for highlighting. I used the mid tone to base coat the banner and highlighted up with the turquoise to give that a shot. Overall I'm very happy with the results although I do think I went a little heavy on the turquoise but hey... I'm learning. I'm going to make most of the details gray and the laurels will be silver. 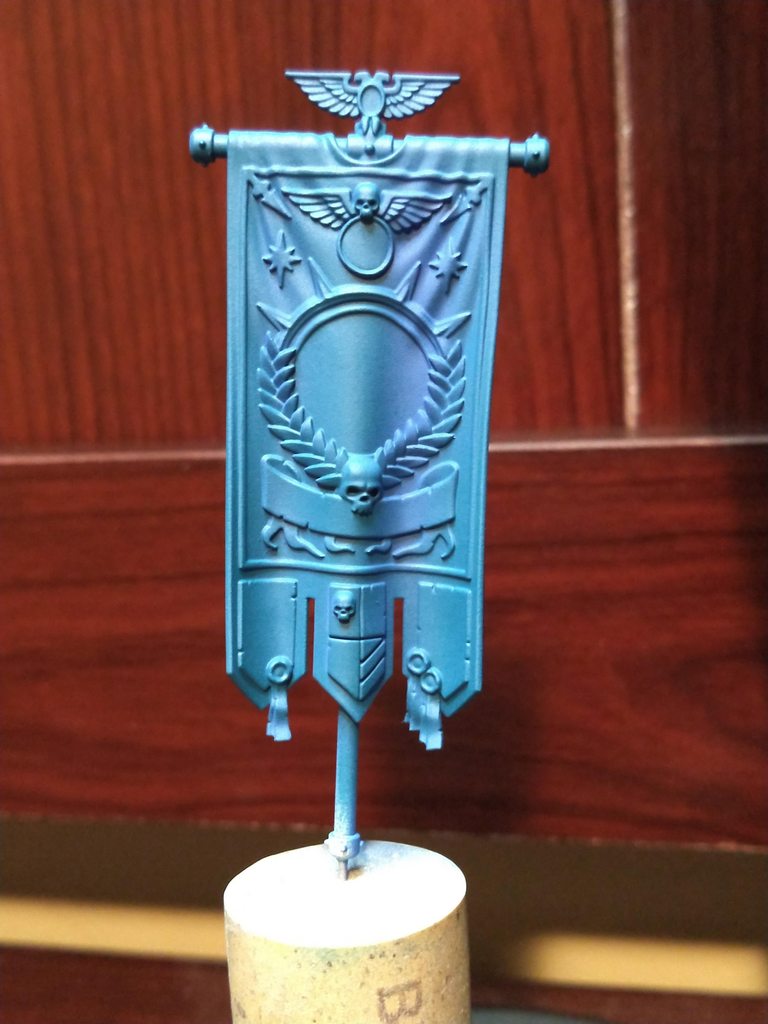 Thank you! It's a pain to paint but I love the scheme. My wife came up with it so I'm committed to keeping it.

It's a very interesting and striking scheme and the banner looks very nice! Good luck with the airbrush!

I'm trying to stay away from flashy colors. A lot of the details will be gray. I'm not sure if I want the border relief to be metallic or a muted gray like the marine chest pieces.

Finally got around to working on my power swords for my three HQs. I'm not happy with them but they work and from afar they look good. My transitions were rough and choppy but I learned some ways to paint them better so the next time I need to do one it should go much smoother.

Converted Primaris Librarian is done which means I can now participate in the psychic phase! I have never acted in that phase in any way so this is exciting. The blue is toned down in person, in the photos he looks like a smurf. The scar in the base was my attempt at modeling damage that he inflicted from using his psychic powers. I think it sorta of came out as intended. 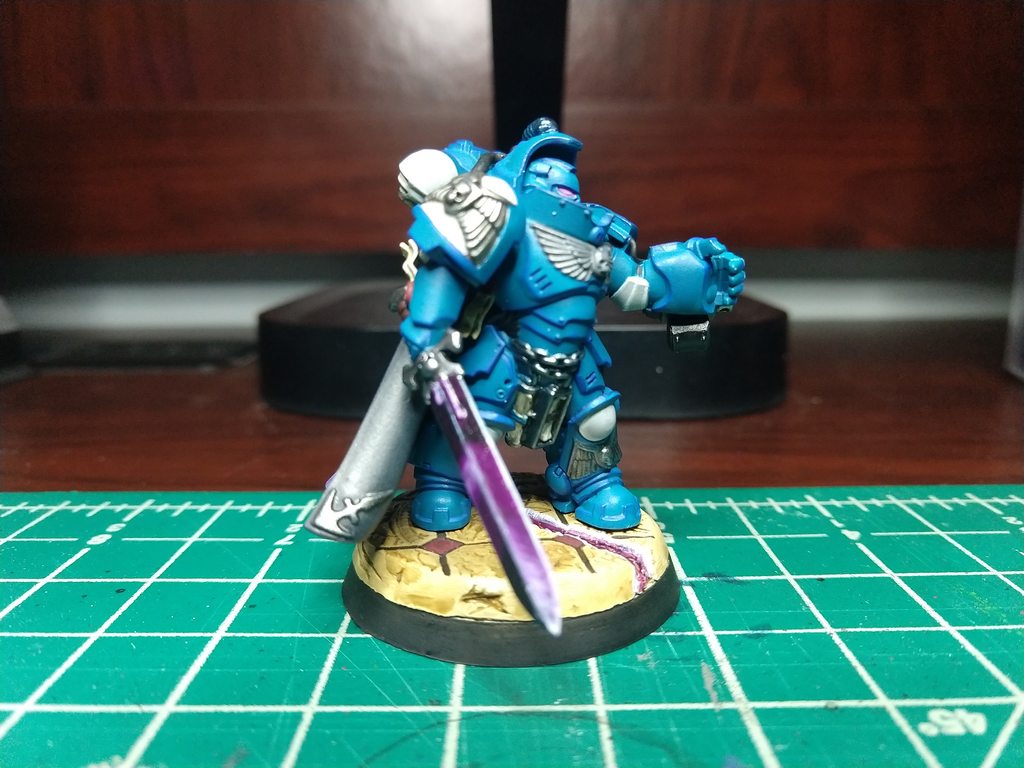 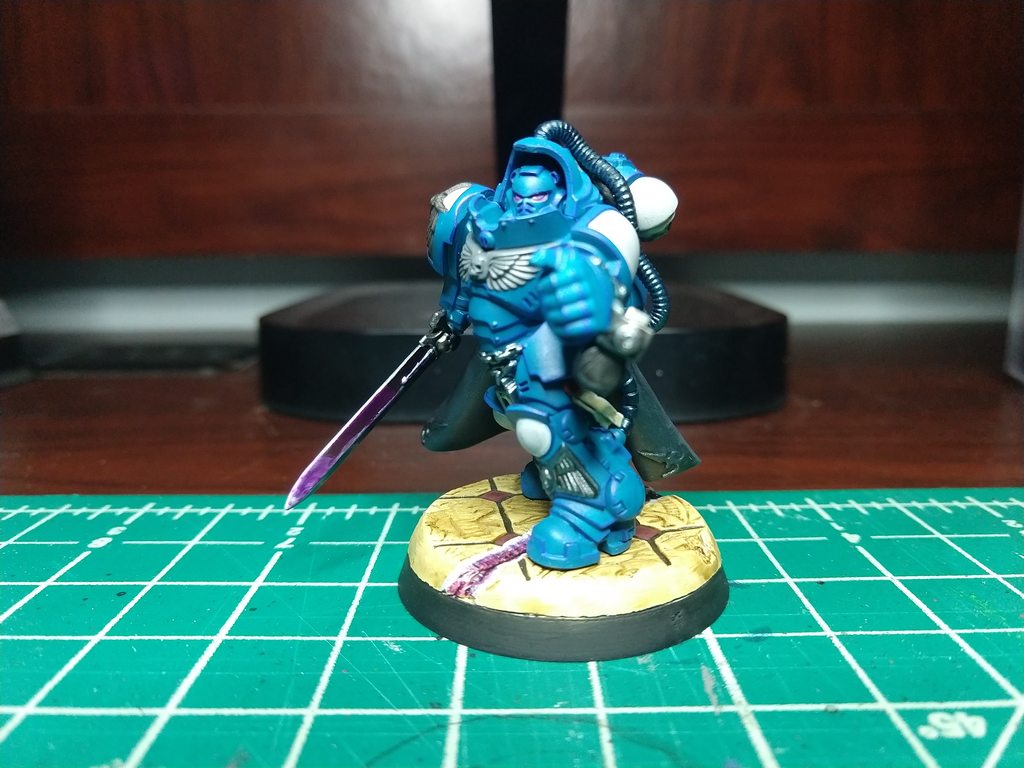 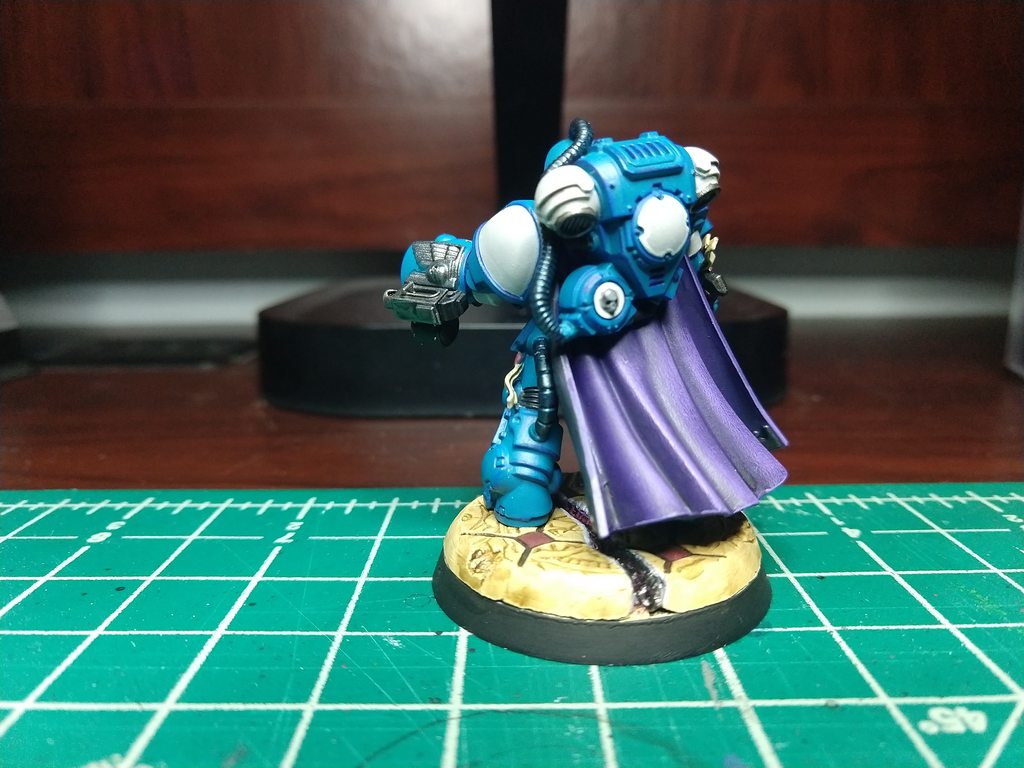 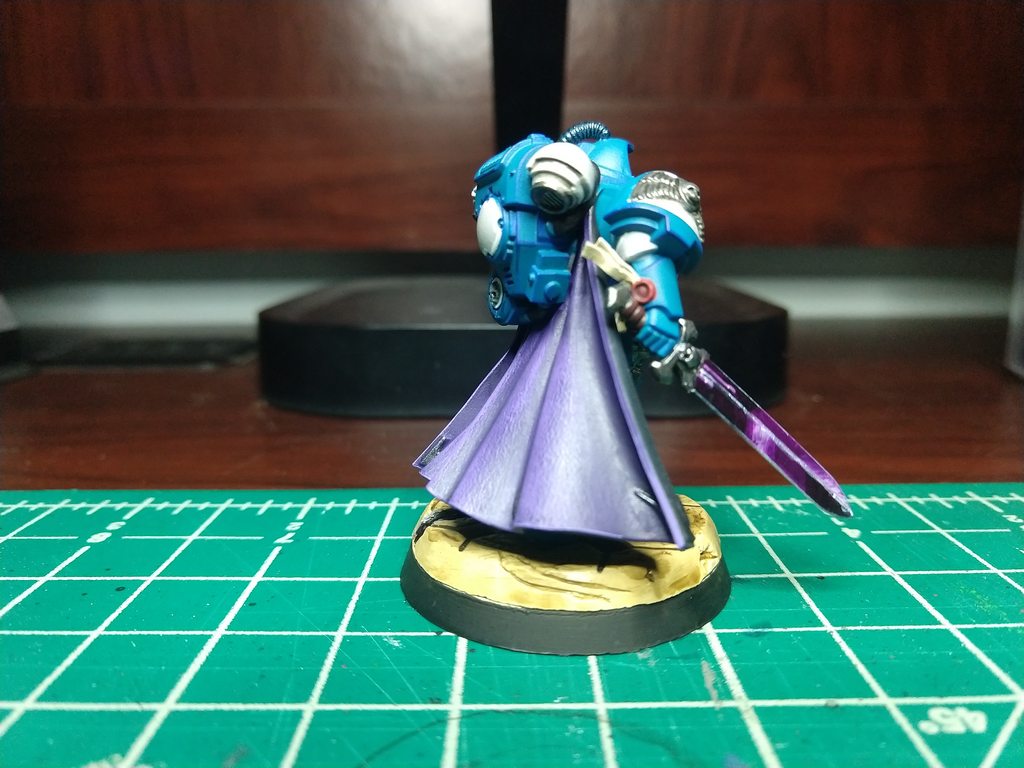 Thanks, Bjorn Firewalker. I'm happy that I went with purple for sparse details. I think it adds just enough to stand out without being dominant. I was originally considering orange but the blue and purple work together much better, I think.

Here's where I got with the Ancient's banner last night. I'm waffling on the second color for the shield on the bottom. I want to do purple but I'm not sure how it will come out since all of my other purples are washed on. 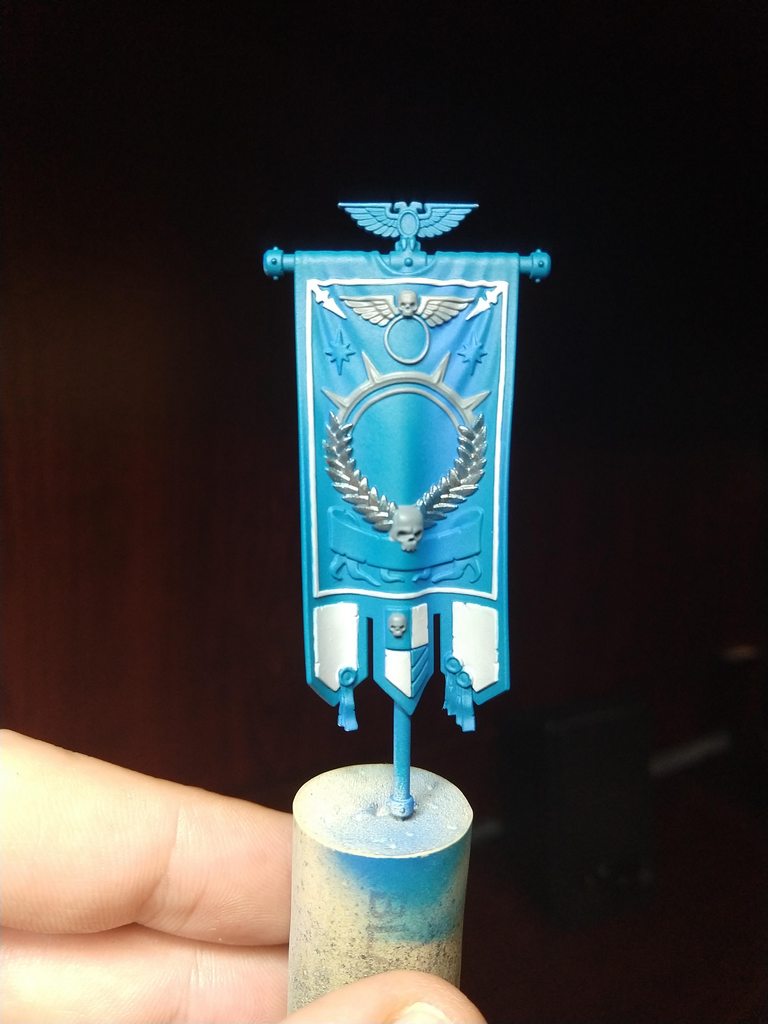 If you mean the middle, quartered shield, There shouldn't be much problem with washing, as surfaces are small. However, such small splash of dark color might look awkward. I mean - it would appear at the bottom for no apparent reason.
How about yellow? This might be later on repeated on the stars to tie things up more.

After Brother Longjohnsilver's prize support arrived I had to put the Redemptor together. I will say easy to build is easy to build. I prefer the models with more pieces and pose options but I will never look a gift horse in the mouth. It went together really well and is drying right now (I clipped off all the push fit stuff). I think I may be a dread-head because I can't wait to get this and my venerable done and on the table... 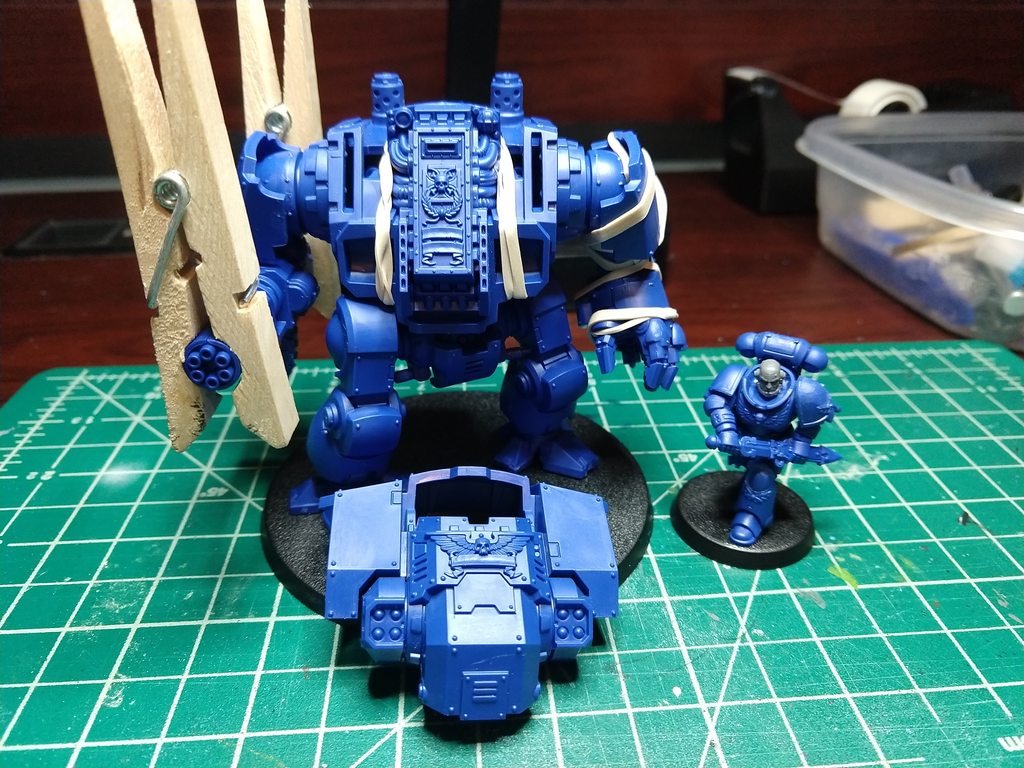 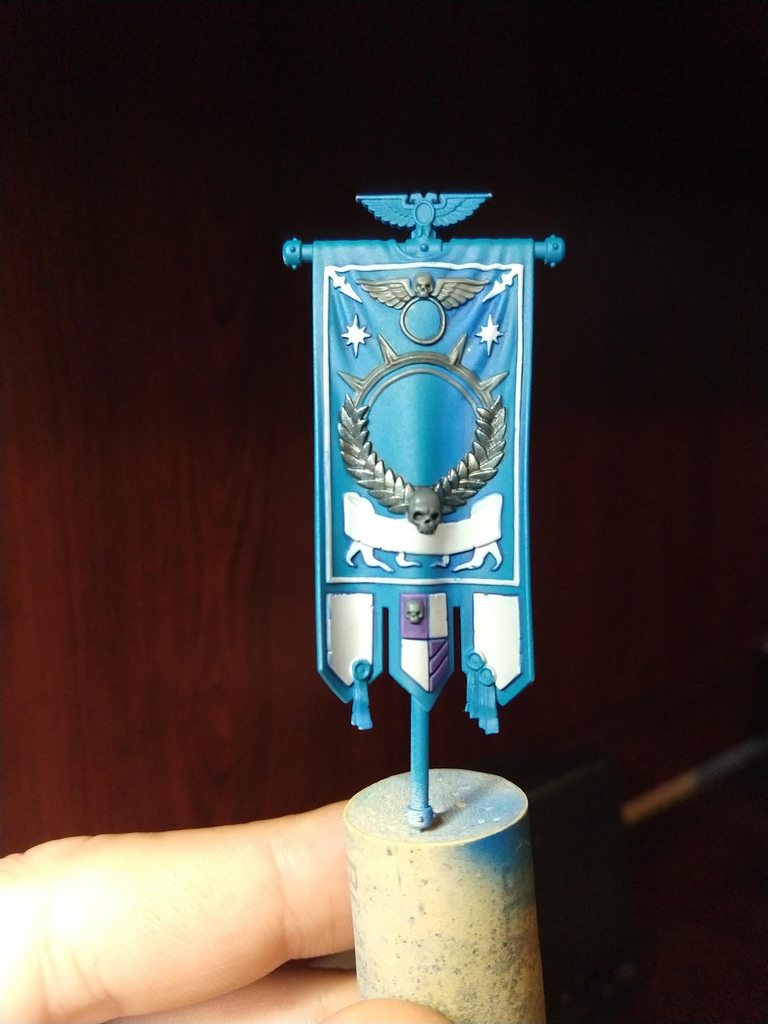 The standard is beautifully colored.

I plugged away on the banner tonight and got it as done as I can. I'll eventually add decals but I need to get my chapter symbol made and printed so all of those are on hold for now.

This makes three HQs that I've got in my chapter colors which is really nice. I'm going to focus on some filling out other force org slots now. 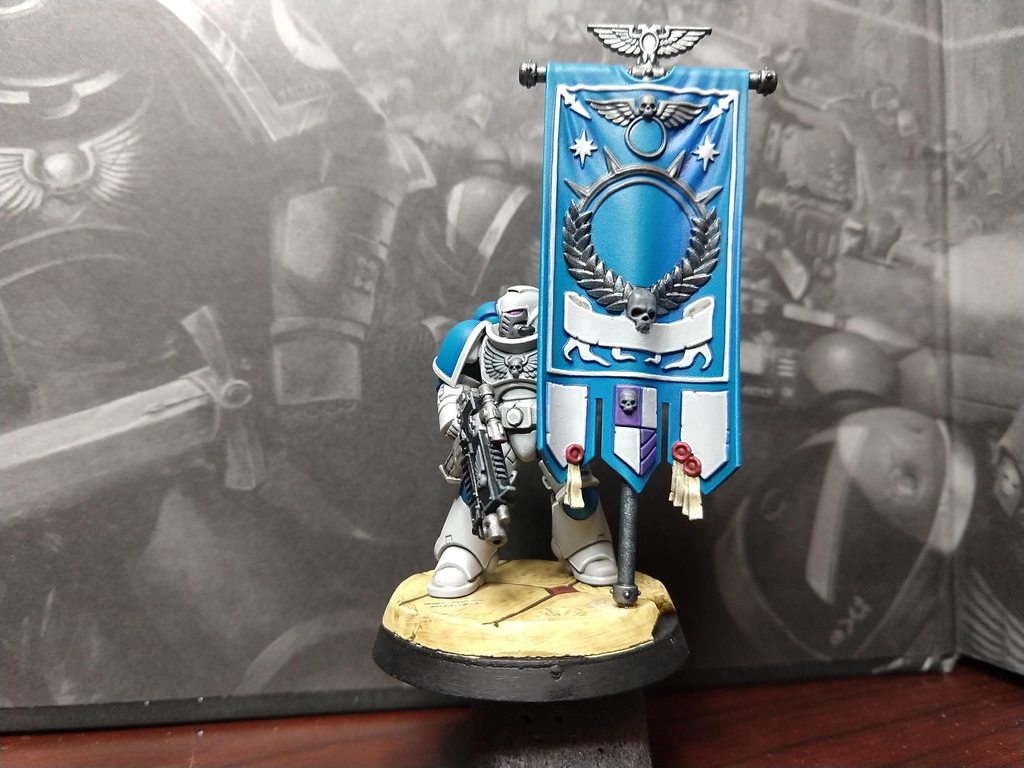 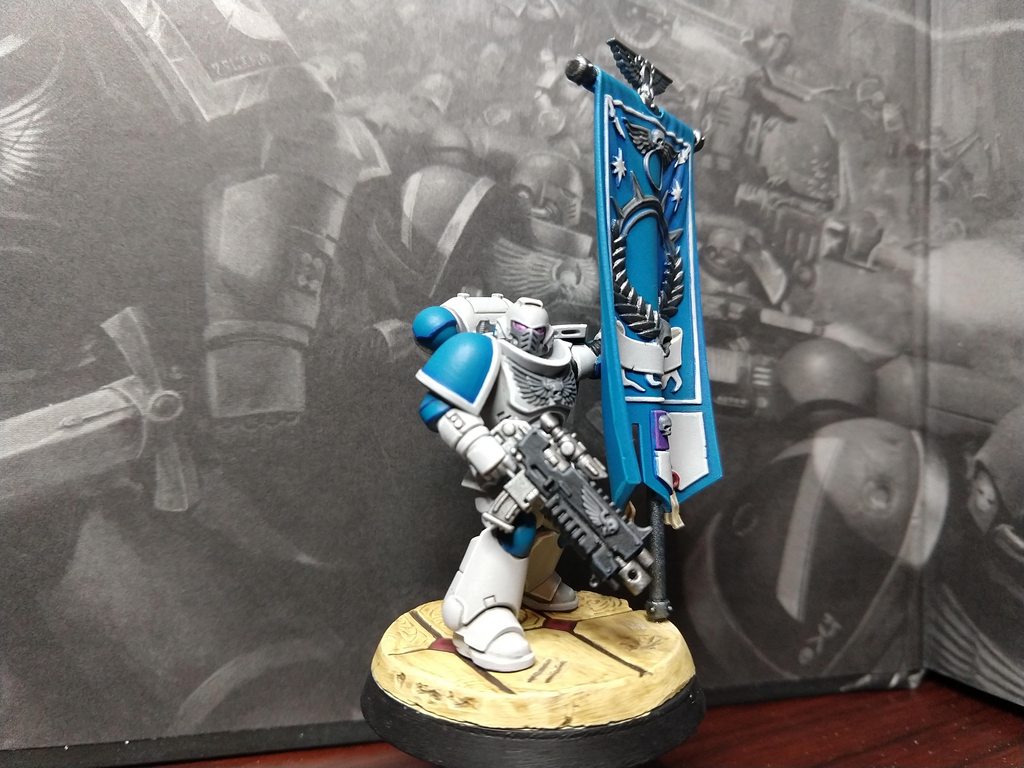 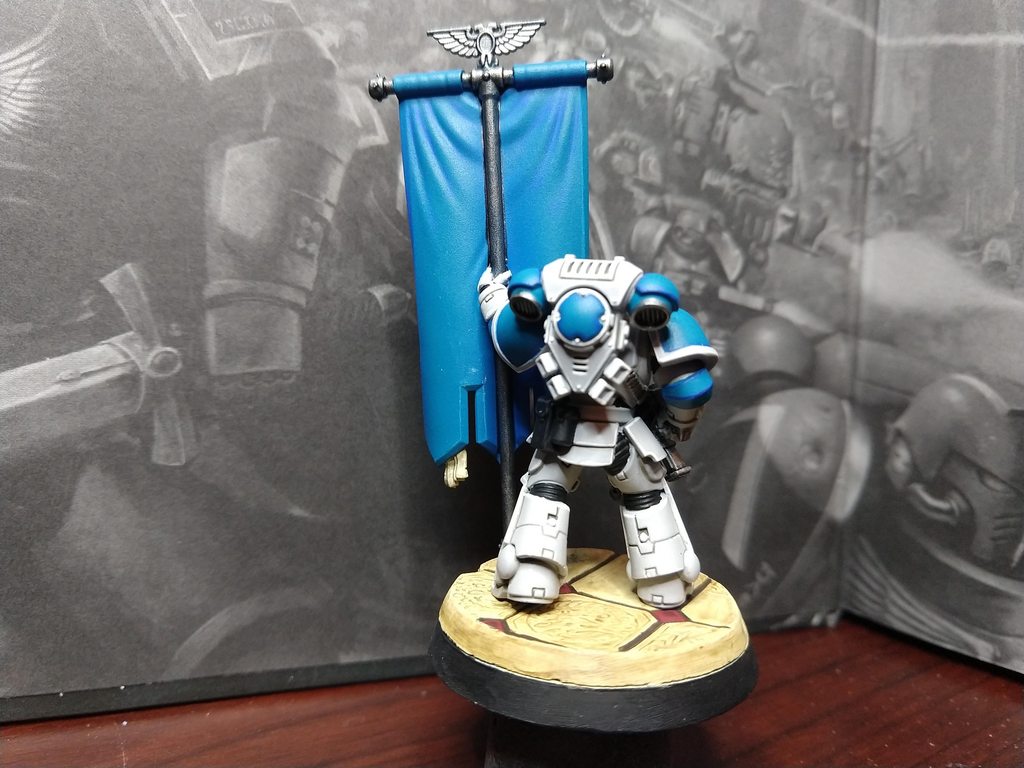 Made a DIY light box today with some foam board I had left over from a previous project. At the least I get a consistent background and at best I saved some money. I'm going to play around with lighting and diffusion to see how I can make this work. It's interior is 190mm x 195mm so it should fit most of the models that I have on hand. Not sure how well a knight would fit in it... luckily mine is still on sprue 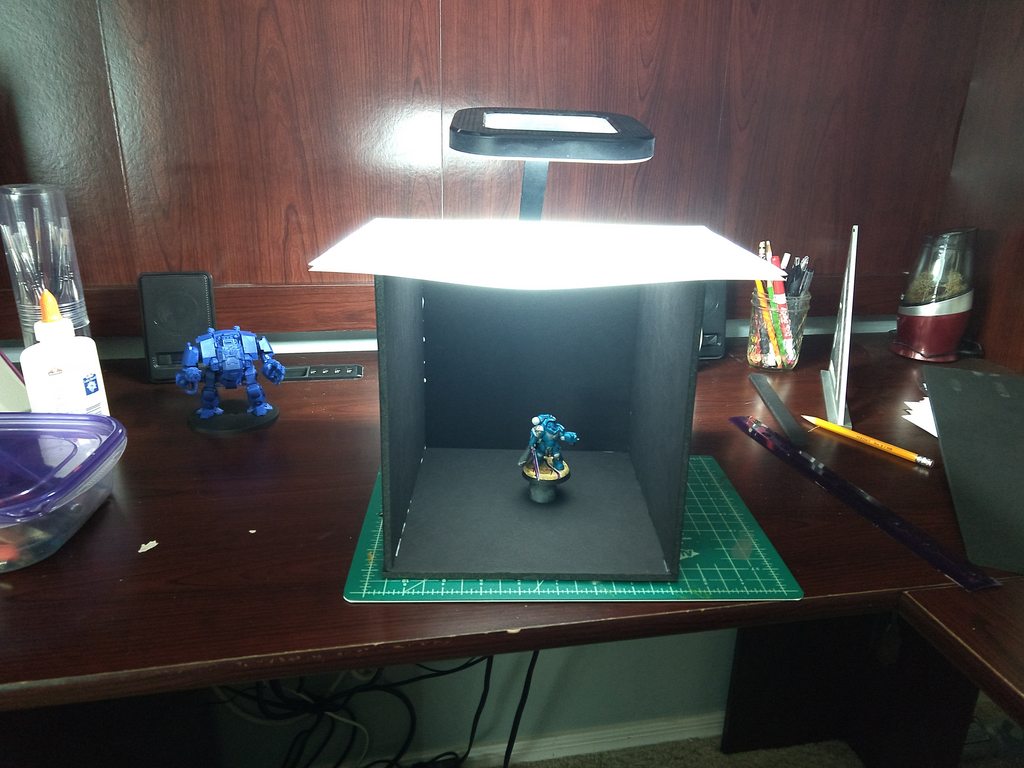 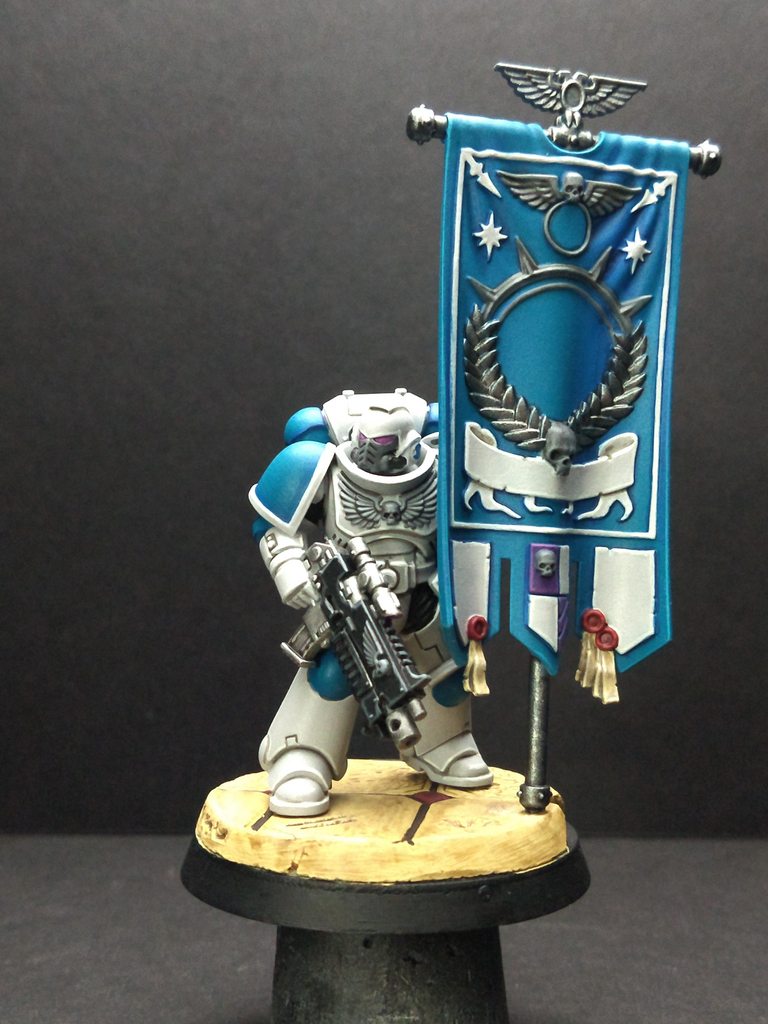 Got some work done today. My shadowspear units are waiting on my camo cloak idea so I redid cloaks for two scouts since my first attempt was too thin. Overall I like where this is going. I'm planning for the cloaks to be dark gray and the 'camo' effect to mirror my bases. I also wanted to try and paint them to look dynamic. The two cloaks I have will be a good test for that. The scout on the left will have more gray on his cloak since the pattern is on the bottom while the scout on the right will have more of the 'camo' effect on his cloak. 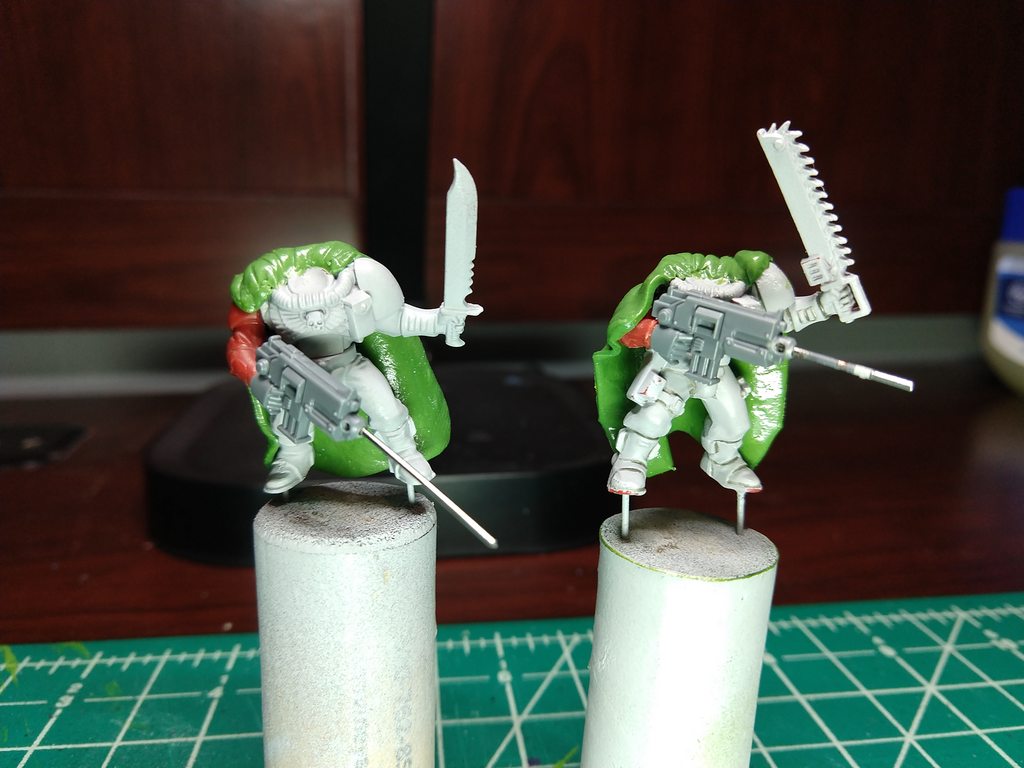 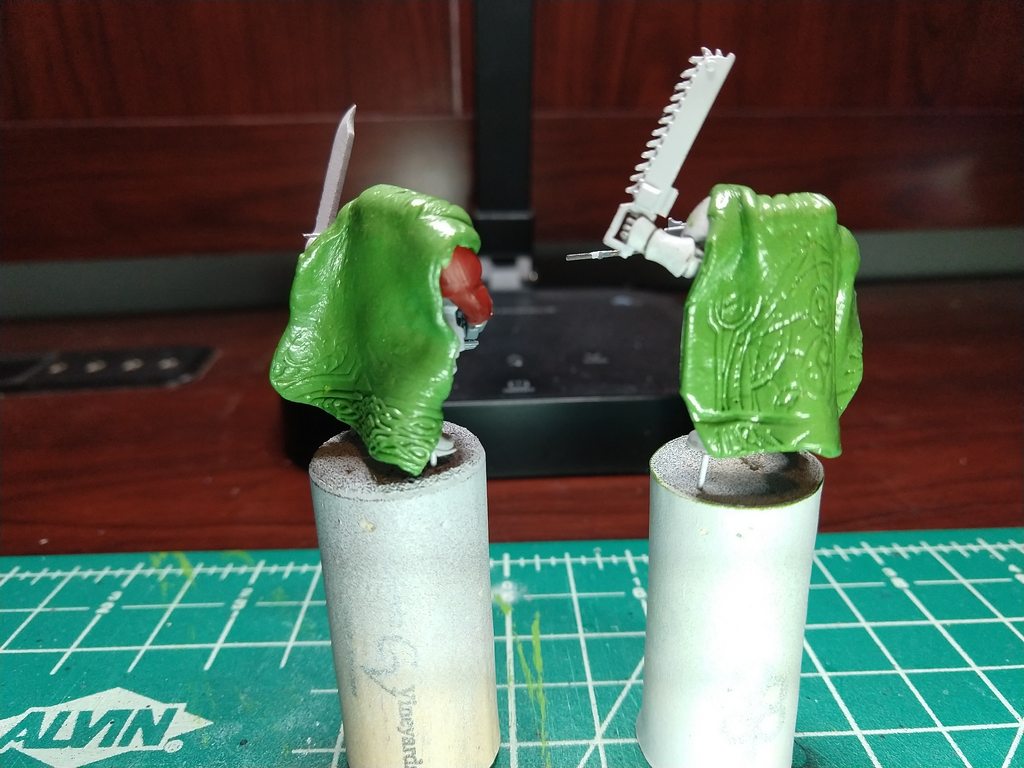 I also got all of my admech heads cleaned up for use on the scouts and I base coated my Phobos LT and two Intercessors. I'll probably pledge the LT for ETL so I can get some points on the board for my team.

Got my ETL vow listed (Phobos LT) today and got the recess wash done on that and two other intercesors. 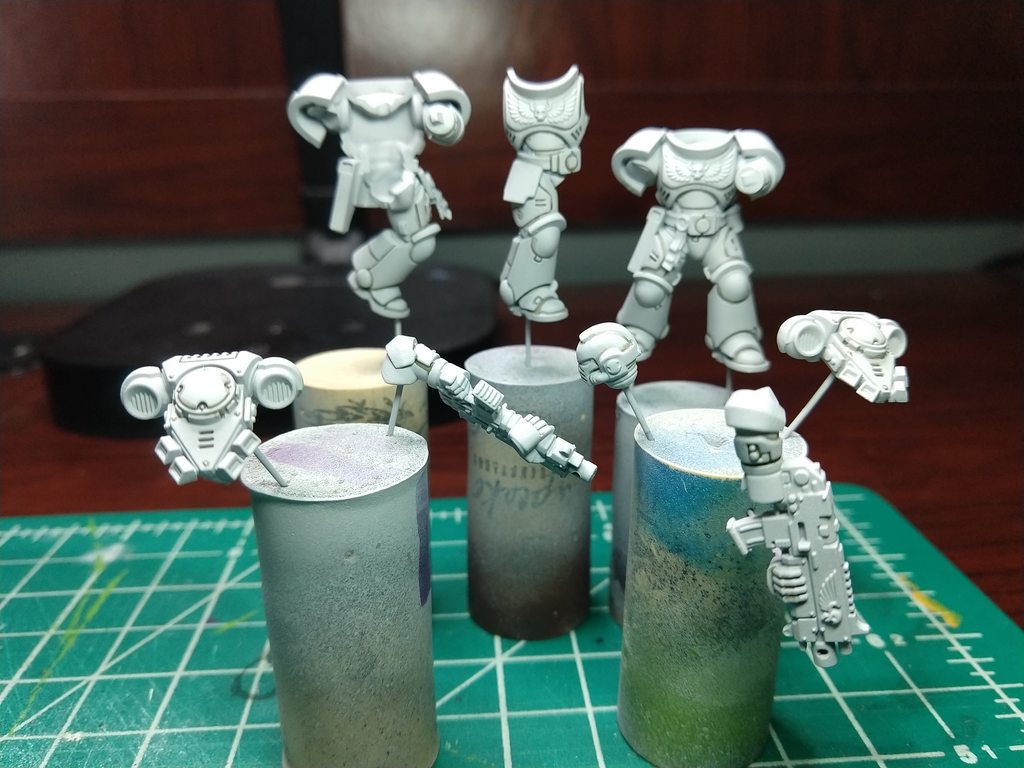 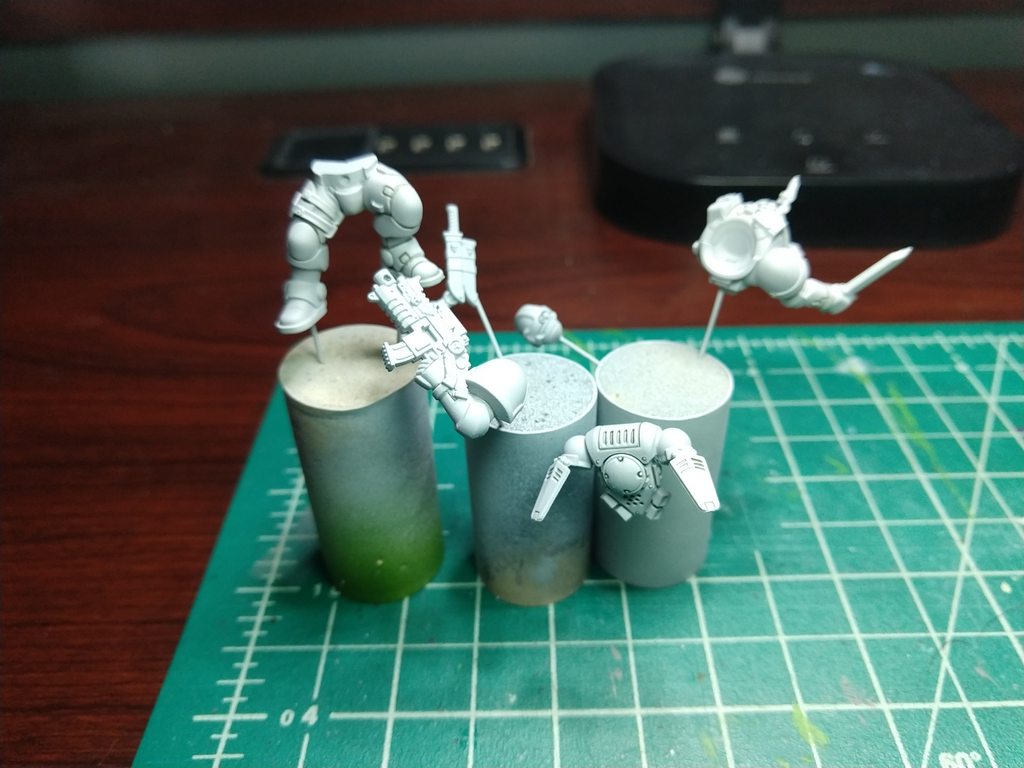 I also got my 40mm base done for my Primaris LT. You can see it needs a varnish when you look at the shine on that compared to the 32mm. The 40mm is for 40k, the 30mm is for Kill Team when I run him as my combat specialist. 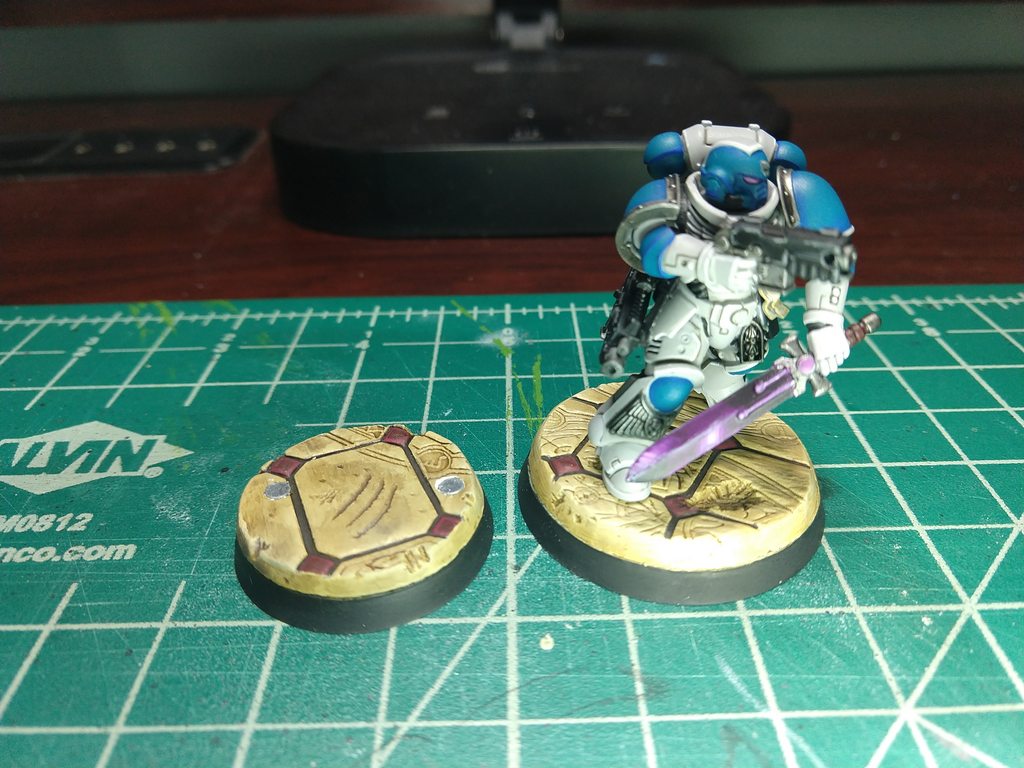 Nice little conversion of the LT. Astartes need all the completions they can

Thanks! I used a pair of reiver arms in him. I like the reiver pistols a lot more than regular bolt pistols.

Played another game against my Ork opponent from last time. We continued our little story arc. I did a write up on it here: http://www.bolterand...tely/?p=5335593

My opponent's titans are all WIPs so we played with what he had in its current state. The mechanics were easily grasped and we were able to draw LOS since all the profiles were close to accurate, minus a carapace here and there. First couple turns were a little slow and I played my warhound like a warlord, but in turn 3 stuff started heating up with reactor leaks, critical damage, explosions, and got really fun.

I played a stratagem that caused my critically damaged warhound to explode in the hopes of taking out his warhound... sadly it did not. He had a reactor overheat and he rolled the worst thing on the event table which caused his titan that was a huge threat to me to explode and it also wounded his warhound. I had a Reiver that I was able to get into combat and it punched his warlord in the kidney and caused some critical damage. There are just so many cool little moments that happened in this game and I cannot wait to get my stuff built up and painted.

I'm leaning towards a black/green marble paint and snow themed bases... any thoughts on that?

Picture from the game: 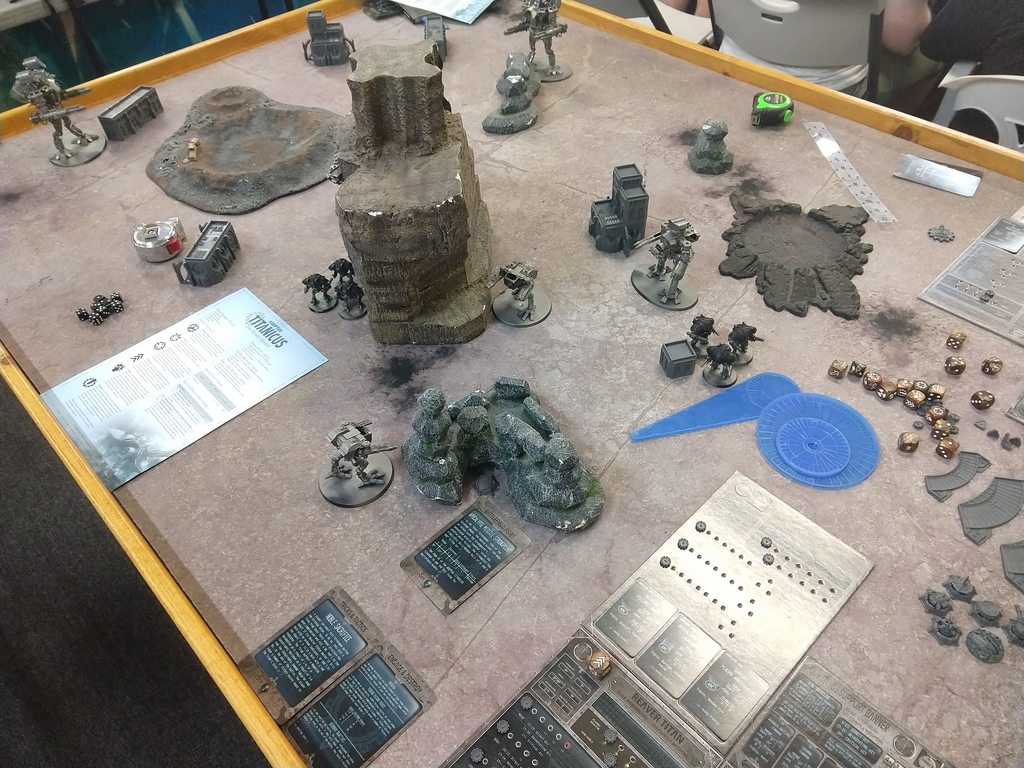 I really hate painting this scheme but I love how it looks when it's done. Oh well, slow and steady wins the race.

Two more intercessors and my Phobos LT got work done on them. Recess wash, first highlight, and soft armor and pouches are done. This is the point where I usually sigh in relief because the final white highlight and blues go on fairly quickly. The recess wash and first highlight take forever and are very tedious.

I added some retarder to my concrete wash that I use for recesses and I think it really helped. It's more defined on the model and was a lot easier to work with on the brush. 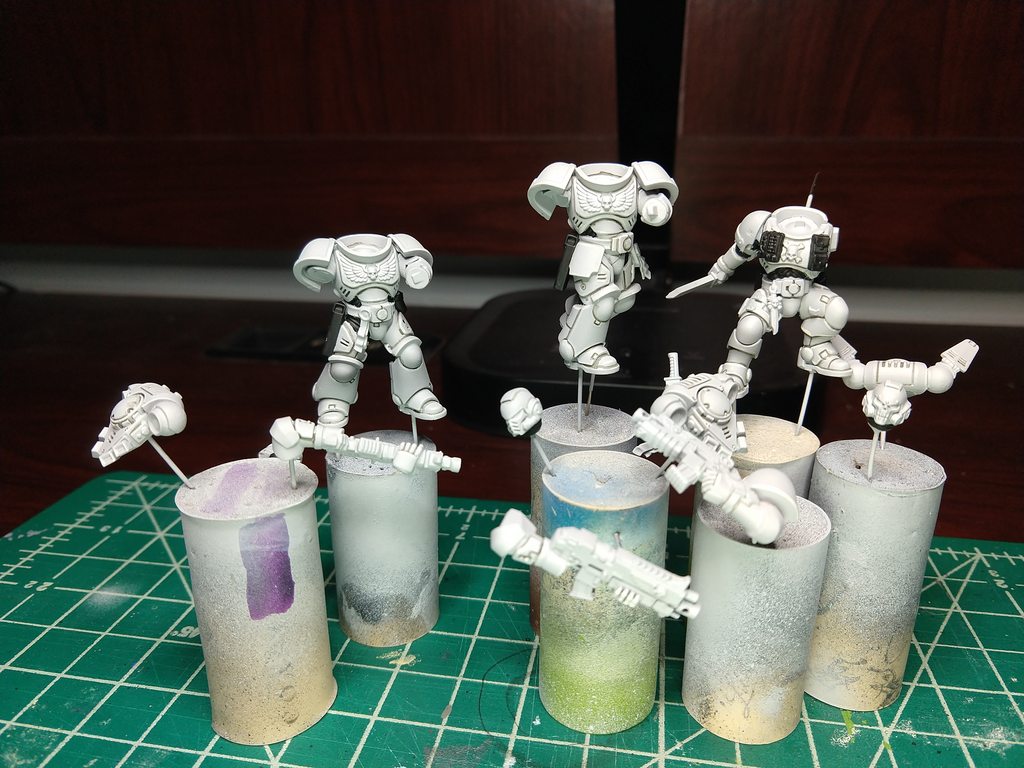 Made my first snow base to do some testing for my AT theme. PVA glue and baking soda is pretty easy to work with. For my first attempt I'm very happy. 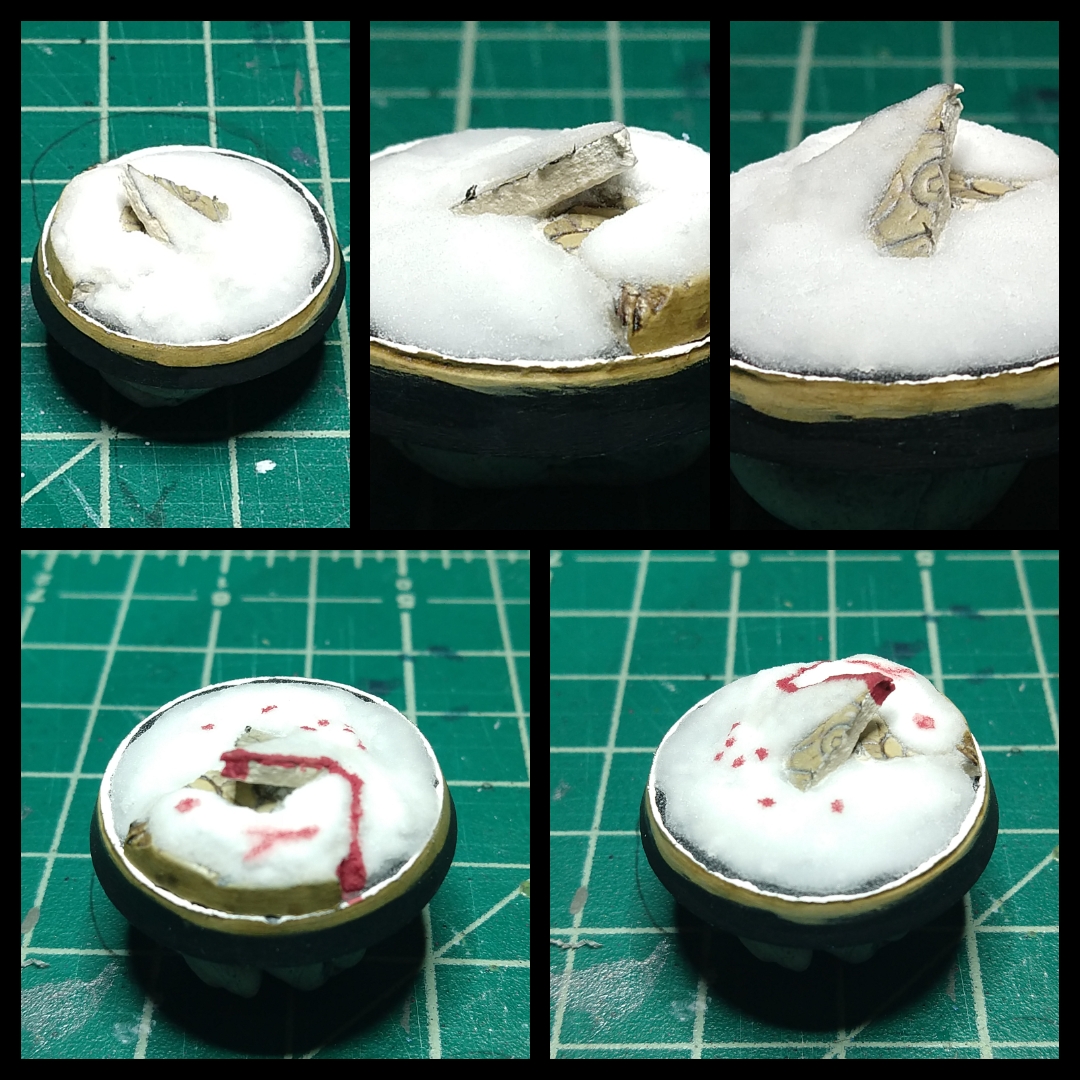 Played a game with my son today. It was his first time playing his necrons outside of Kill team. Mini bat rep here: http://www.bolterand...tely/?p=5339367

Started a new plog for Adeptus Titanicus. If you want to follow along head over here: http://www.bolterand...nd-knight-plog/