Magnets are really cool. I've learned some tricks over that make using them a lot easier. This weekend I made a jig to hold the magnetized bits to make it easier to prime them. My last project took forever to prime/seal because I had to do the weapons one at a time. This should make that a little faster. It's double sided (one side all North polarity, the other all South) so I can attach all of one kind to a single side and get a good spray. Hoping to test it out this week once the wind dies down. 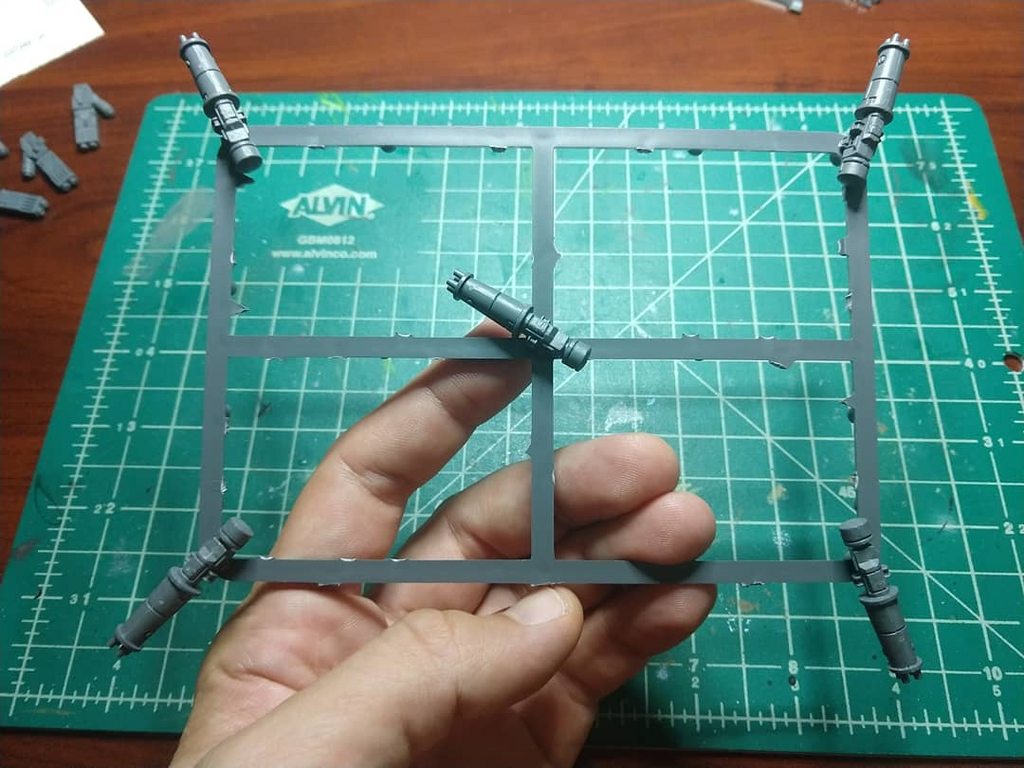 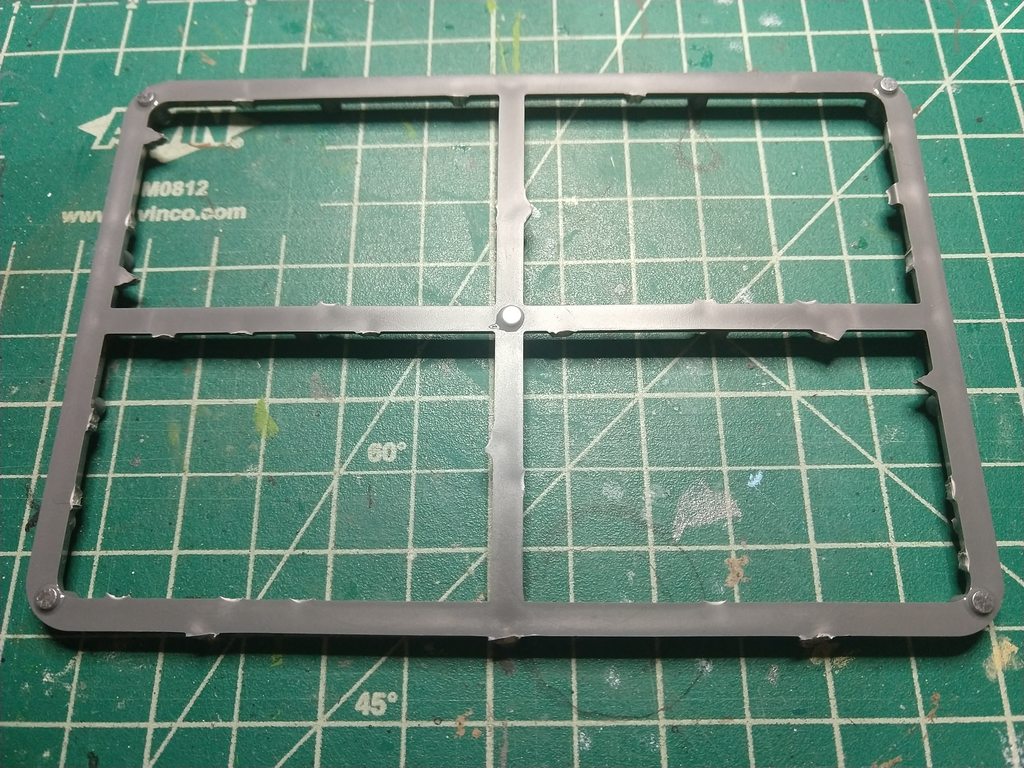 Slight detour for a painting event going on in the Raven Guard area. Airbrushed the base layers on my medicae tonight. I've decided to paint my Apothecary in an inverted version of my scheme, similar to my librarians. Armor will be red with light great knees/elbows/shoulders. I debated on doing the same for the Helix Adept but have decided that he's not a full fledged Apothecary yet so he'll have my gray armor but I'll do his right shoulder red.

I'm also trying out more base coating and zenithal so that I can push the contrast on my gray scheme. So far I like where it's going and I think when it's highlighted and done it will look a lot better than the flat way I've been painting so far. The close up of the helmet shows off the contrast from light to dark much better than the front shot. 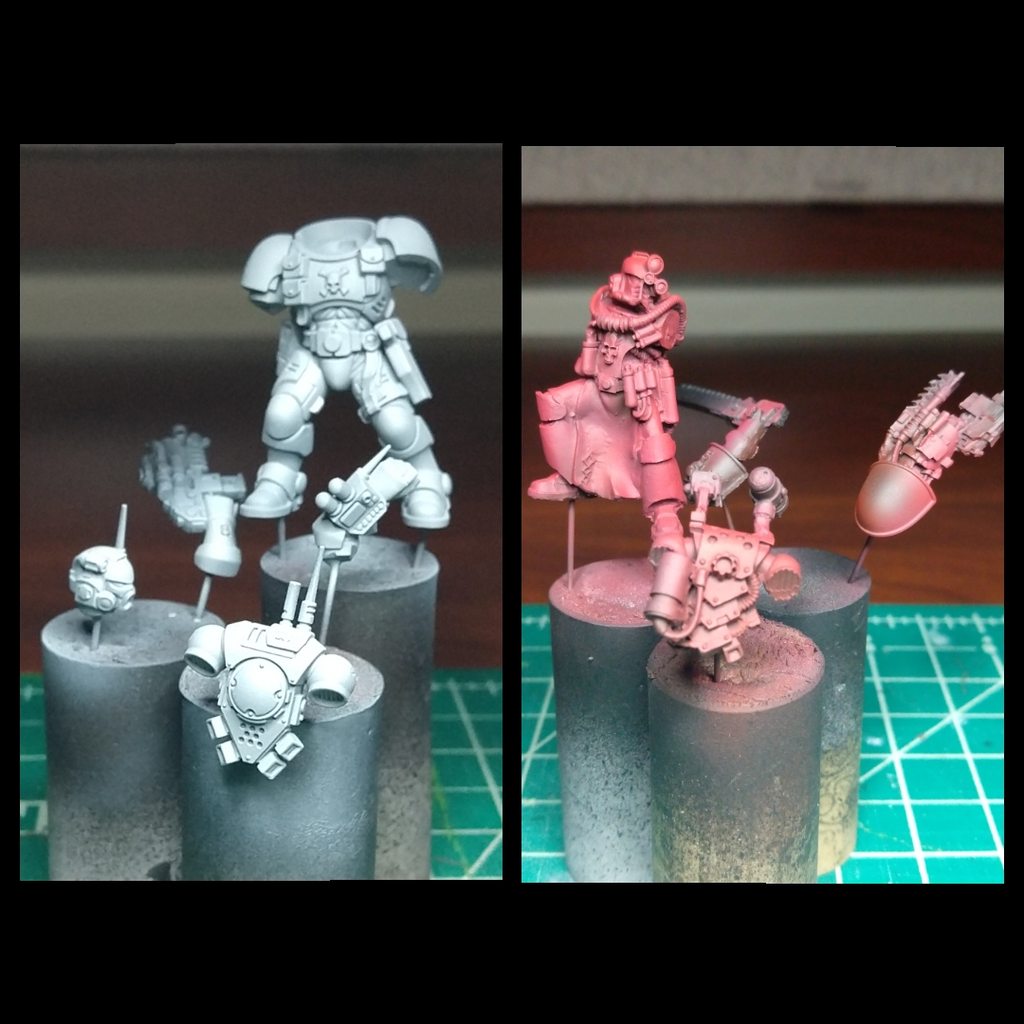 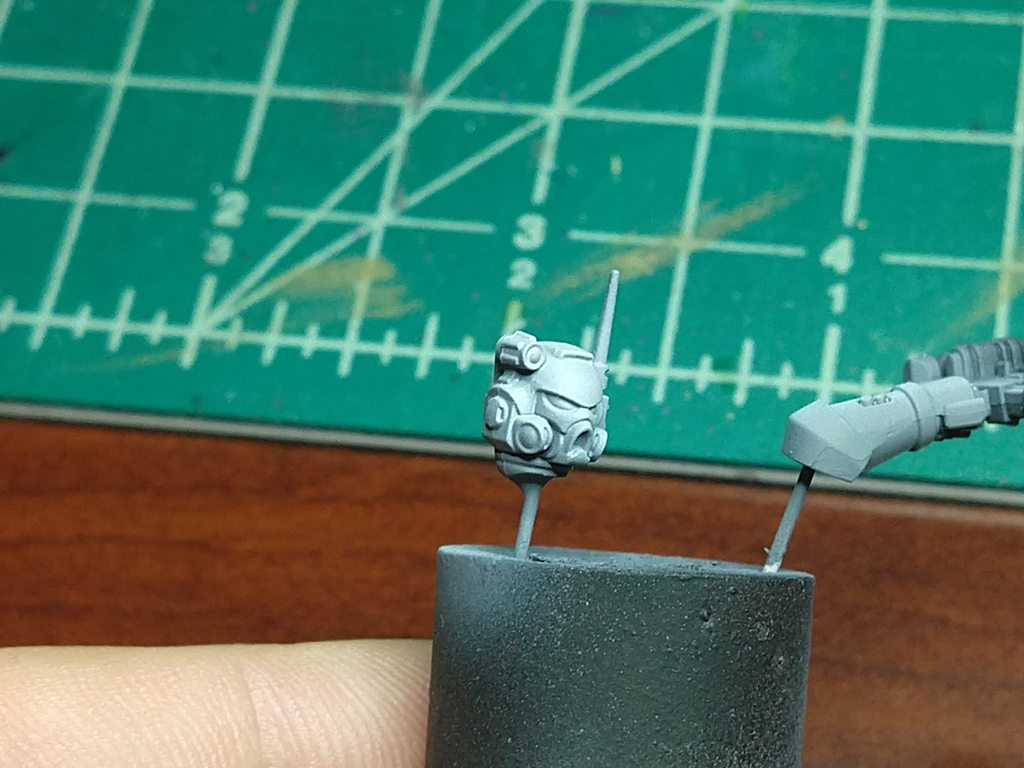 Helix Adept progress! I'm really happy with how the model is coming. I base coated it entirely differently than my last attempts at armor and the contrast really shows and I'm very happy. Before my models were very light grey but now I'm basing in a darker grey and zenithaling my light grey color and it looks much better. I also reworked the blue trim color because I had this reverse highlight thing going on that I decided I'm not happy with. I pulled out some models I'd base coated previously to test new blues on and that's when I realized how much better, IMO, the new armor looks. First pick is before/after getting better with the AB. Last pic is where I got to last night. I think the red shoulder is a little bright so I'm going to try and knock that back down. 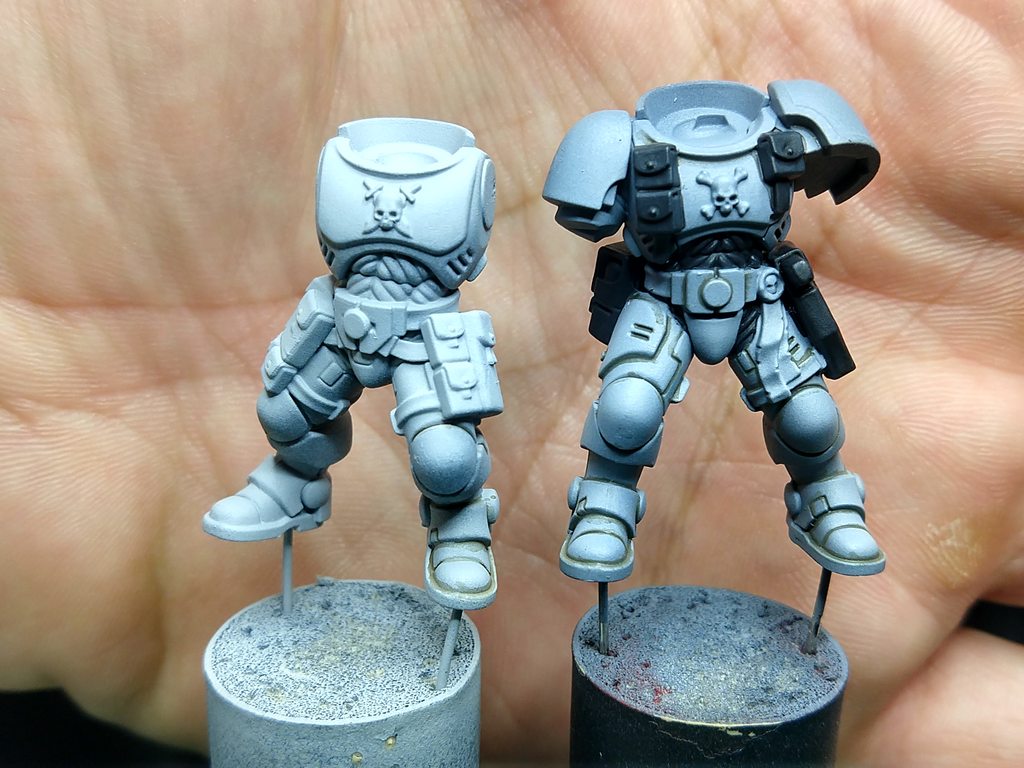 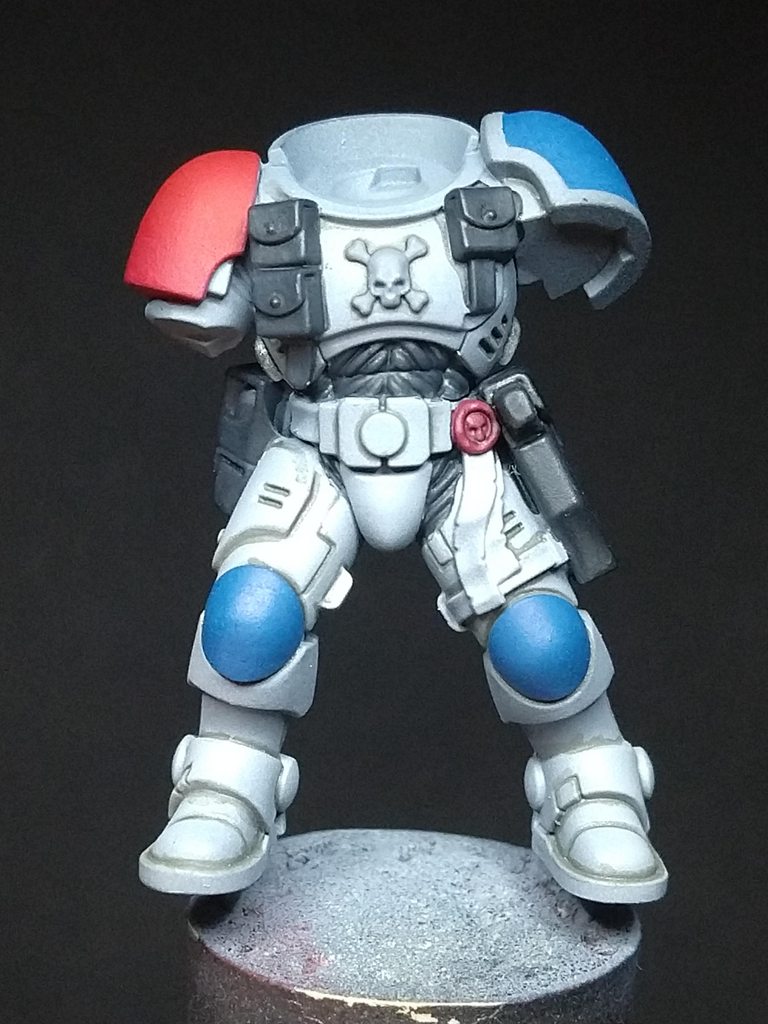 I agree, deeper shades are a definite improvement. Good job!

Started on the base for my Apothecary. Saw this idea somewhere and can't remember so sorry for not attributing credit where it's due. I plan on having arms that are cut down and then adding rubble to the base to hide everything else. 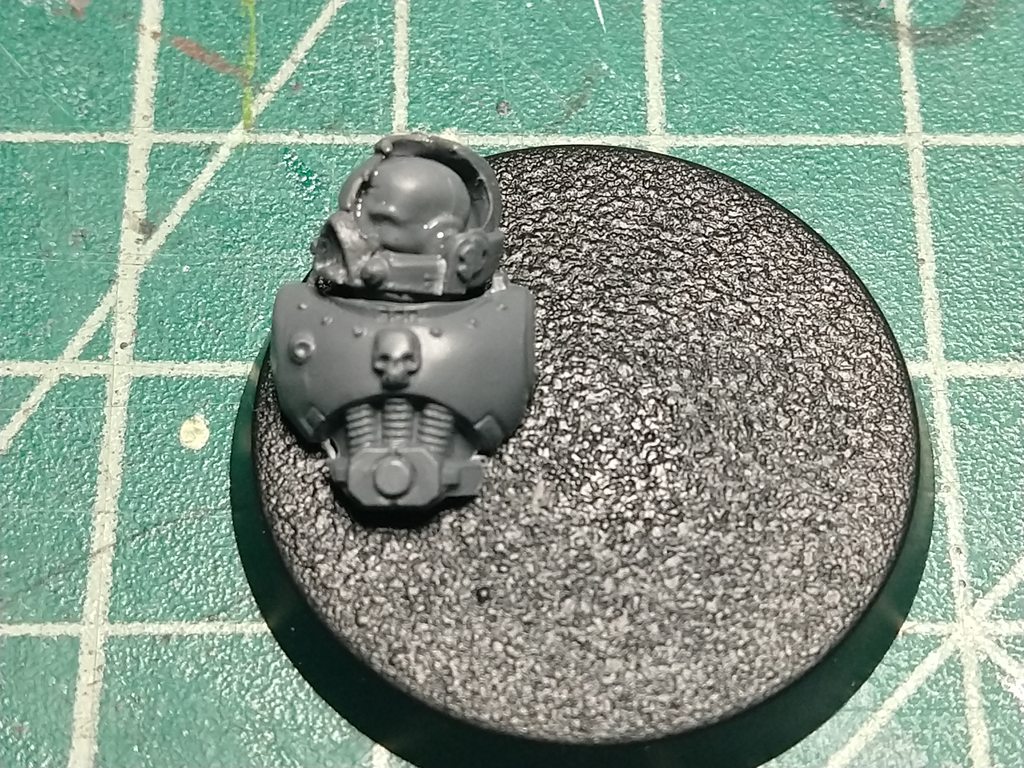 Reminds me of the Khorne Berzerker upgrade with the cracked helmet. I'm going to try this for my models!

Reminds me of the Khorne Berzerker upgrade with the cracked helmet. I'm going to try this for my models!

Thanks! Wasn't too hard with the Dremel, just has to go slow so I didn't take out too much material at once.

Helix Adept body is done and based. I'm really happy with the changes in scheme. I even dry brushed my highlight colors on the shoulder and knee pads to give them more definition. I'm not sure if I should take the red highlight up one more level. To do that though I think I'd have to use an Orange Red color I have and I'm not sure if that will be too much. 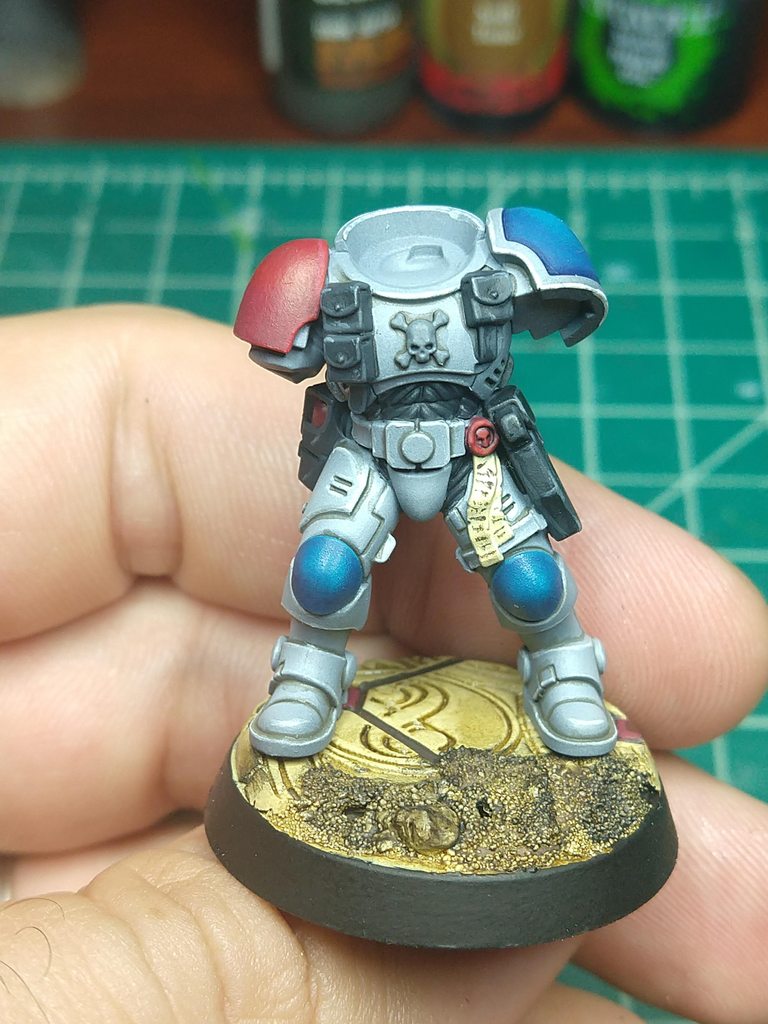 Sweet Emperor your colours are so clean it's scary sometimes.

Sweet Emperor your colours are so clean it's scary sometimes.

I really appreciate the compliment, thank you so much! 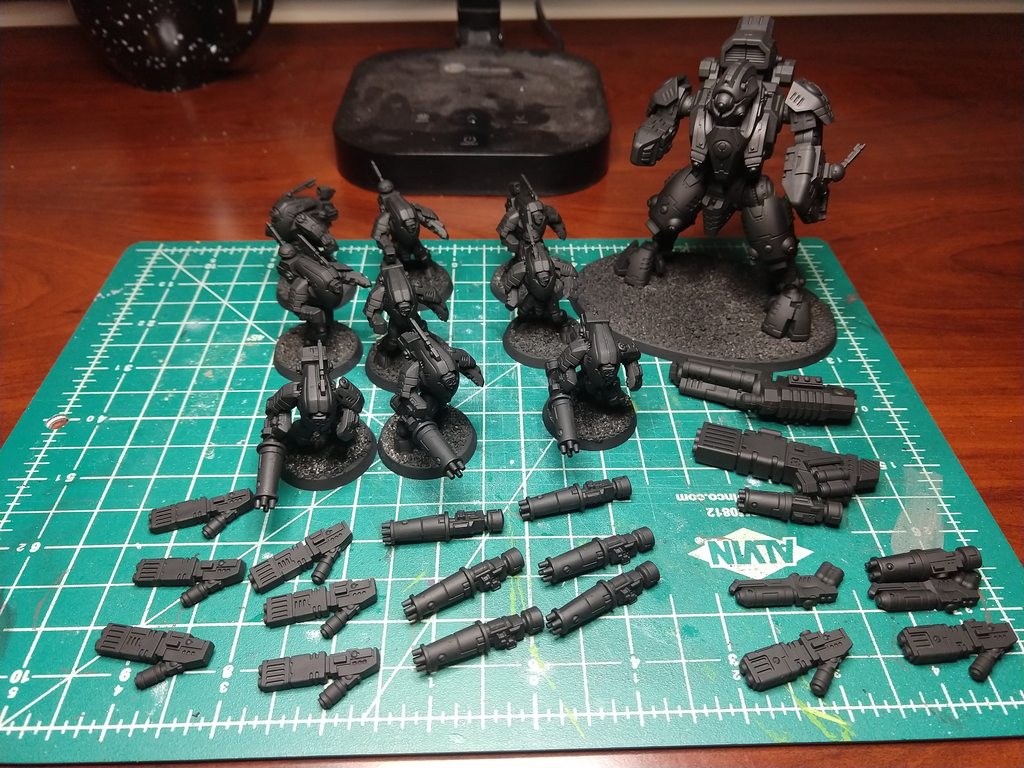 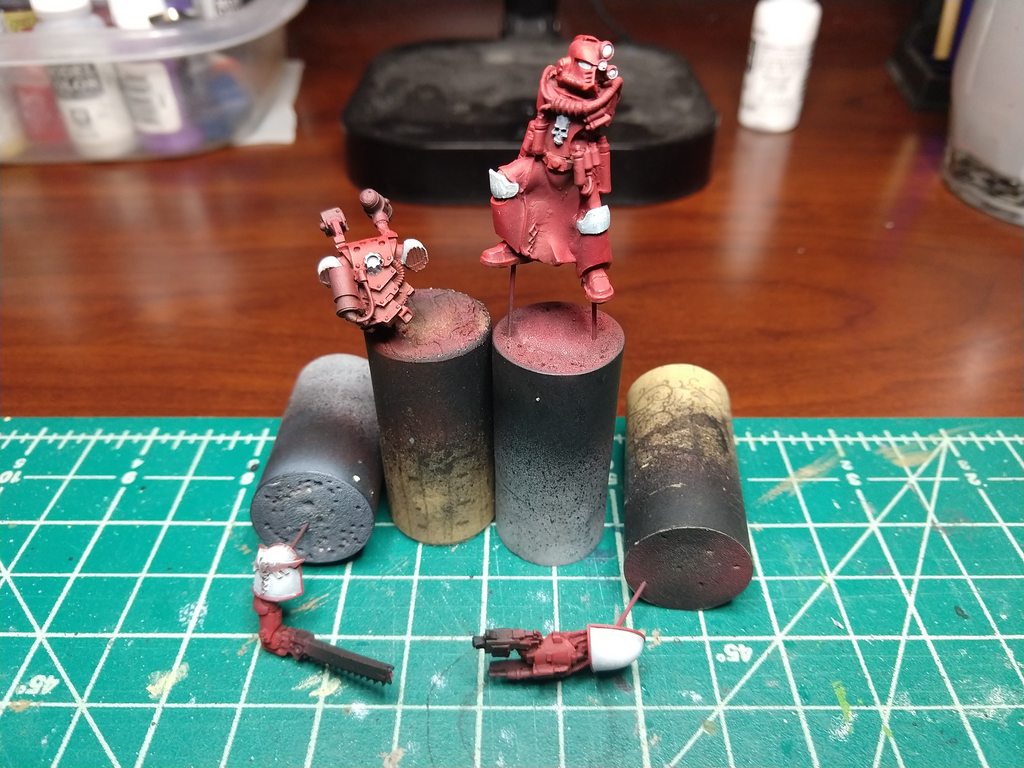 Progress. Vials and tubes are blocked in. Tubes are done, not sure what to do with the vials. I'm tempted to leave them black because I feel like a solid container would be more resilient on the battlefield than a transparent container that shows liquid inside. Going to make the crotch cloth purple since that's my cape color. Base coat and wash is on, I'll do some glazing/dry brushing from there to lighten it up. My goal right now is to get the torso done so I can fit it to the base. 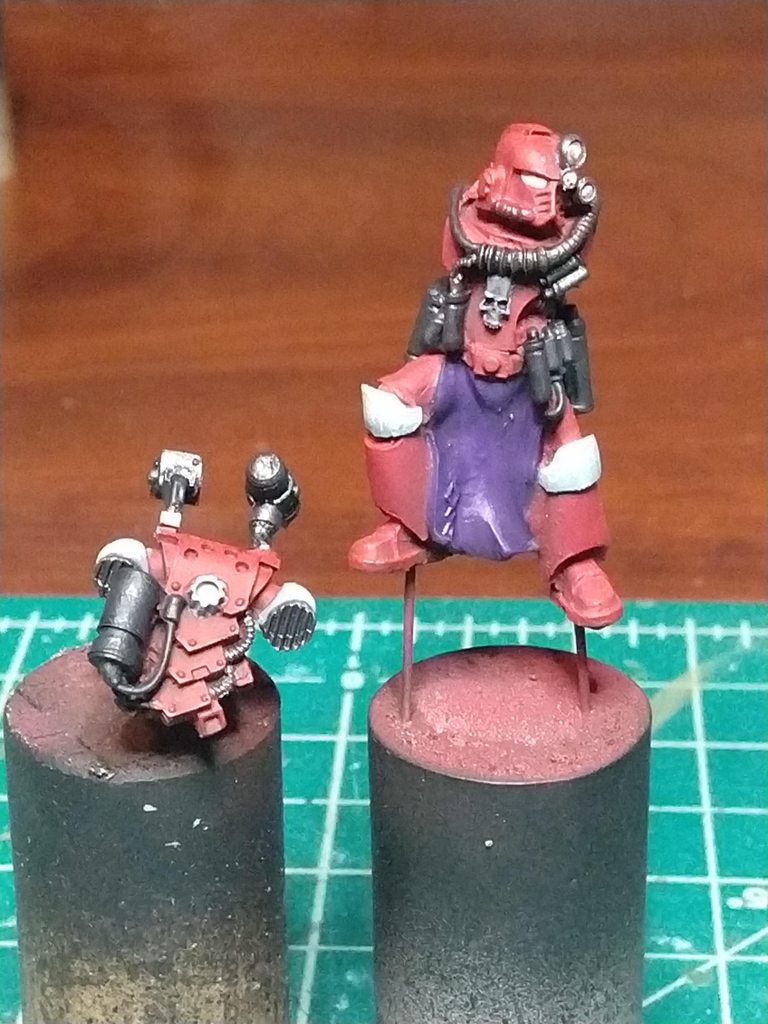 I was able to prime all of the Crisis suits and weapons last night. So many weapons. But I'm hoping to get those base coated and then I can move on to actually adding color. I was studying the riptide photos I've got and I think overall this will be a fairly straightforward paint job. I had to leave the arms off the suits so I can get the vents sprayed with blue, I'm glad I caught that before I attached them because it would have been tough to get the color in there otherwise. 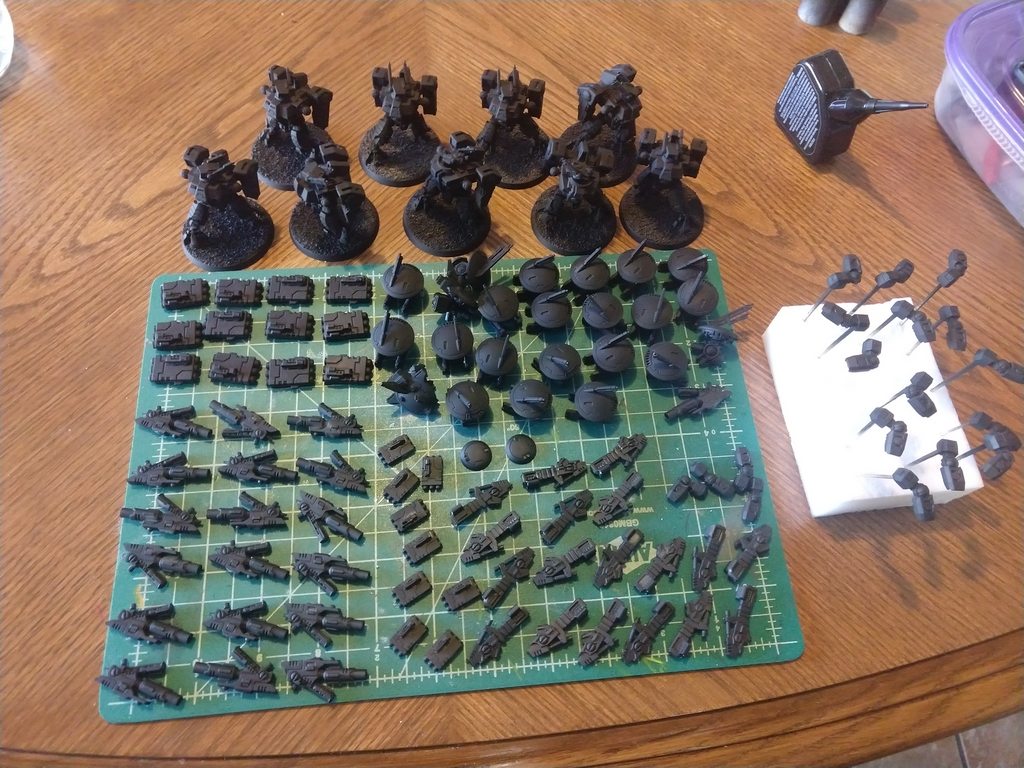 Apothecary complete, lots of fun to paint. After this nothing but Tau until that project is done. 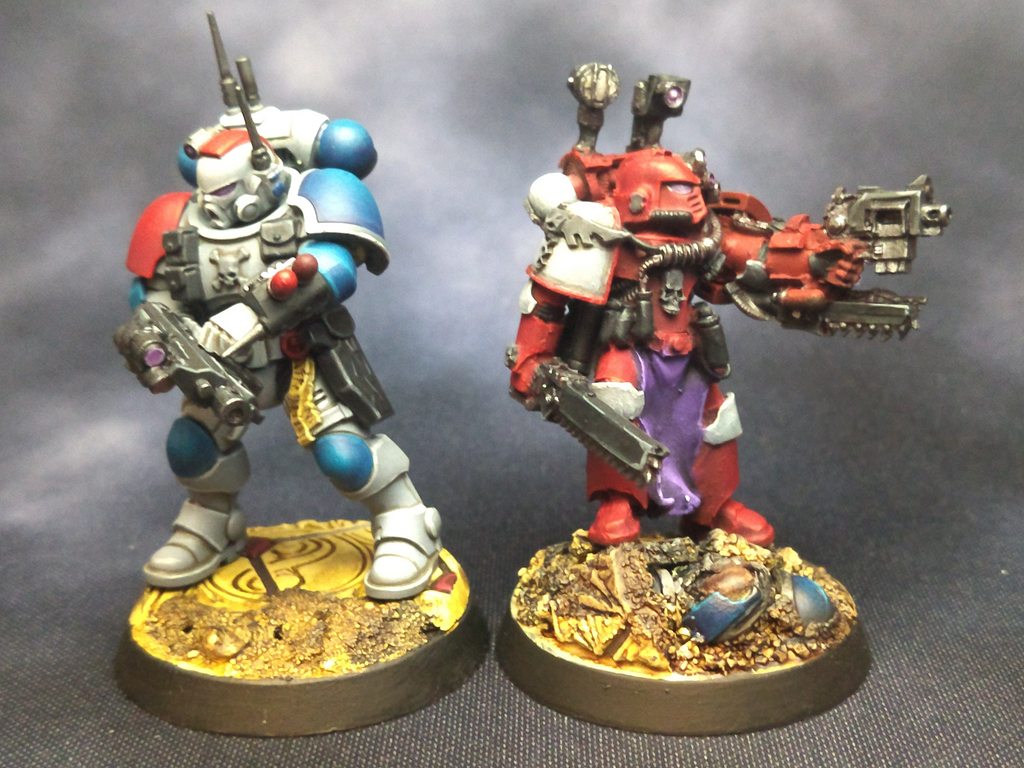 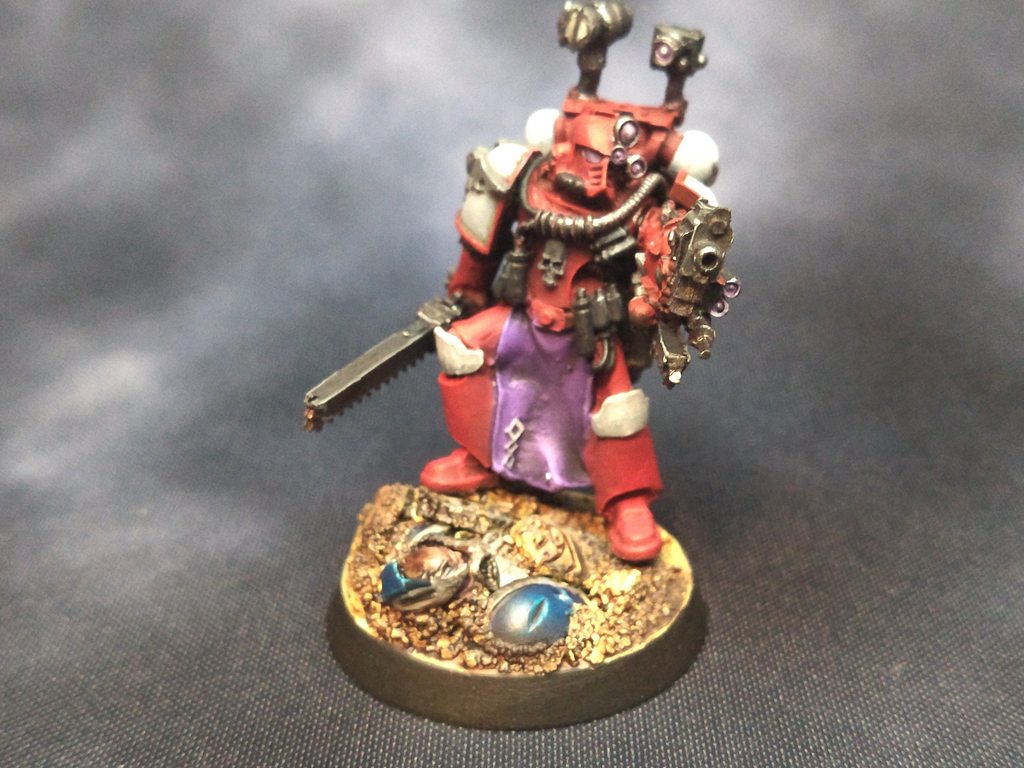 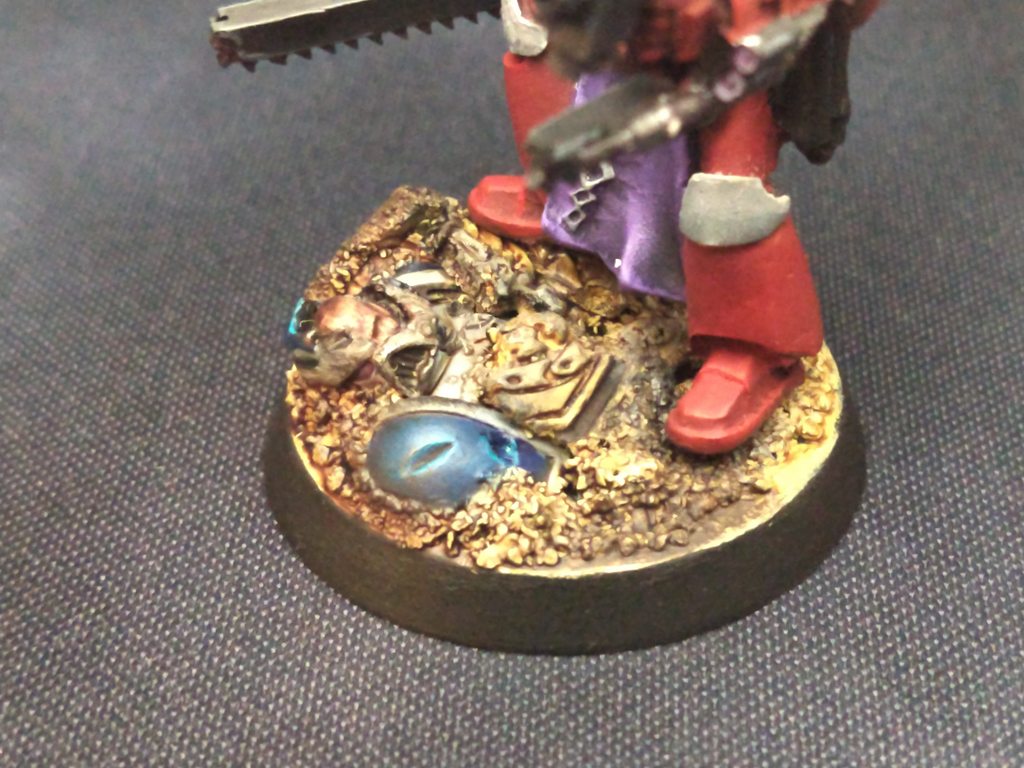