51 replies to this topic

Being an account of the Siege of Koth, believed by many to be the last true compliance of the Great Crusade, fought even as heresy and betrayal cast their shadows over all that we had created. It also serves as a rare insight into the strategic tendencies of the First Legion, and a near perfect example of their strength, determination and ruthlessness, qualities that the Traitor forces would learn to respect and even fear in the dark years that followed.

MORDRED, Master of the 7th Chapter, Commander of the 56th Expeditionary Fleet

BARACHIEL, The Knight of Woe, Centurion of the 22nd Assault Company

In truth I feel sorry for the Kotheans, even though I know I should not. I know that they brought this destruction upon themselves: that they scorned the Emperor's Vision for the future of Mankind; that they rejected our offer of peaceful integration into his Great Imperium; and that when informed of the consequences of their response they murdered our emissaries in cold blood, declaring war on Him and all his subjects. There is no debate that they deserved this fate.

Still, I feel sympathy towards them. As I watch the vast funeral pyres consuming their home world, I cannot help but think that if they had known the true horror of what would be unleashed against them, then perhaps their decision might have been different.

As for the First, they did their duty as they always do. But each time I witness their cold, calculated fury on the battlefield, and the abject devastation that inevitably follows, I must confess it is not pride I feel.

it is simply dread.

- Attributed to the Remembrancer Ivon Zhenka, attached to the 56th Expeditionary Fleet

So I've decided that despite the new Primaris marines and Death Guard, I really need to finish some of my 30K Dark Angels as well. Hopefully this new blog will give me the impetus to keep working on them. I'll be updating the Dramatis Personae in the First Post (and this one, if I reach the post limit) with pics of finished models as I go along,

Thanks for looking, C&C are always welcome

Thelial is my favorite . He just plain looks like a Knight . And the Knight of Woe also Smash and Slash.

Those are some very characterful conversions. Great stuff.

Glad to see you're back at it!

Your stuff is truly inspiring.

Awesome Hulk! I haven’t seen much of your 30k stuff, but it’s most definitely on par with your Sword Bearers. I’m really digging Zarael, but I love Kaelon’s pose. Great work brother!

Wonderful conversions but what really seals the deal, for me, is the narrative that you've attached to your models. I look forward to seeing you continue on with the First Legion.

Thank you for the kind words and encouragement brothers!

Updates will probably be a bit sporadic as real life takes priority, but hopefully there will be fairly regular progress.

Some more fluff and WIP models:

Although relatively few in number compared to the main First Legion Crusade Fleet, the Dark Angels of the 56th Expedition were still a formidable and well equipped battle group which undertook a score of difficult and strategically important Compliances. The bulk of their fighting strength was drawn from the 10th Order, specifically the entirety of the Second Chapter and a large complement of the Seventh, including the infamous Ironclad Companies. Consisting of Terran veterans of the Rangdan Xenocides, these heavy infantry regiments were renowned for their uncompromising brutality and skill in close quarters combat. Supported by the 22nd Assault Company and the Destroyer Choirs of the Second, these veterans frequently formed the vanguard of the Fleet's military operations. Unsurprisingly, many of these grim, battle hardened warriors bore the Mark of the Dreadwing as part of their personal heraldry...

Beautiful conversions, you’ve got a lot of character in them.
Any plans to do Redloss?

Cheers mate! No plans to do Farith Redloss at the moment, mainly because I prefer to create my own characters, but also because I think there's a good chance Forgeworld will produce a model for him in the future. So for now at least, Crom will be the leader of the army's Dreadwing.

Brutal pose on Crom, that's one of my favourite heads to create the 'harsh warrior, untroubled by morals if they stand in the way of utterly destroying the enemy' vibe.

Cheers mate! No plans to do Farith Redloss at the moment, mainly because I prefer to create my own characters, but also because I think there's a good chance Forgeworld will produce a model for him in the future. So for now at least, Crom will be the leader of the army's Dreadwing.


Fair enough. I did think it might be a little heavy-handed to force him into the army when you’ve done so much work on creating something new.
Kinda agree that FW might do him too.

In any case, I look forward to more. And paint!

I love your little snippets of fluff.

The Ironclad companies truly sound cool... they might get a tribute, if you wouldn't mind

Also, I agree with the "your dudes" philosophy.
The possibility of building your own story from scratch is one of the main beauties of the setting, and Armund and Titus both look very promising.

Glad to see you kicking brother!

Good to see your work again!

I've been following your WIP thread for a while.

Discovered in the closing years of the Great Crusade, the realm of Koth almost escaped detection due to it's location deep within the Meridian Labyrinth, a vast asteroid field situated in the northern reaches of the Segmentum Obscuras. Only by chance did the Rogue Traders of House Scarus manage to chart a course through the Labyrinth, but in addition to the rich, untapped mineral resources that they expected, they found an entire human civilisation isolated from the rest of the galaxy since the Age of Strife.

Consisting of no less than twelve inhabited worlds, the Kothean Stratocracy was both highly militarised and technologically advanced, and was quickly determined to be either a highly valuable addition to the Imperium, or alternatively a dangerous obstacle to future northern expansion. Such a high value system represented both a prestigious prize and a formidable challenge for any of the prominent Expeditionary Fleets, and indeed the Warmaster's own, the 63rd, was well within striking range. Therefore most Imperial Strategists were surprised when Horus dispatched the 56th Fleet, a far smaller and more modest force drawn from the redoubtable First Legion to prosecute the Compliance.

Of course, in hindsight it is easy to see that Horus sought to distract and delay yet another Imperial force which would have invariably remained loyal to the Emperor. And with the events about to be set in to motion, the Kothean Compliance was obviously far from a priority in the Warmaster's thoughts. For instead of Meridian, the 63rd Fleet instead began the journey to Istvaan...

“The glass turns, the grains fall.”

The Paladins, or Pure-Blades, are the elite swordsman and weapon masters of the First Legion. Whether leading line squads of their battle brothers, fighting independently as Company Champions or serving collectively as units of Bladesworn Veterans, each Paladin represents the pinnacle of Dark Angel close combat ability - the most skilled, disciplined and lethal warriors in a legion renowned for it's mastery of the blade.

My apologies for neglecting this thread, had a lot of real life stuff going on recently. Not much painting progress (as usual

), but I have started building the next wave of Dreadwing reinforcements.

And yeah go for it, I'd be flattered if you decide to build a tribute (obviously the Ironclad all wear Mark 3 armour

Great up date liking the gunslingers.

I particularly like your Dreadwing, but all of your kitbashed models are very well thought...as is the fluff.

Very cool. I have been wanting to do something with those matched mk2/3 power swords forever but could never justify them for my Wolves. Mathias looks great!

So cool, your models are great

I'm always a sucker for a grenadier model. Your posing is really excellent.

Not sure the mk. III helm works with the Dark Vengeance Captain body to be honest.

The Kothean forces opposing the 56th Expeditionary Fleet were both varied and vast, consisting as they did of almost 75 per cent of the system's entire population. Only the very young and the elderly were excused military duties by the regime, and as the war progressed even the infirm and incapacitated were pressed into service, hardwired into primitive exo-suits and dispatched on suicide missions into the Imperial lines. The Statocracy also included at least three stable abhuman strains amongst their populace, the largest of which was comparable to an Astartes in terms of raw strength and resilience. From the massed ranks of Mind-slaved civilian conscripts, to elite formations of cybernetically enhanced Rai'Thek heavy infantry and the mysterious Chrono-Magi, the Dark Angels of the 56th Fleet faced a technologically advanced enemy as fearless and relentless as themselves.

Only in the closing stages of the Campaign would the reason for such a heavily militarised society become clear. As the Imperial forces laid siege to Koth Prime itself, a Xenos threat of terrible proportions emerged from the depths of the Meridian Labyrinth. Suddenly engaged on two fronts, the Dark Angels had no choice but to open the so-called Forbidden Arsenal, unleashing every weapon at their disposal against the foes that assailed them.

Dark Angels Tactical Legionaries of the Tenth Order, assigned to the 56th Expedition: 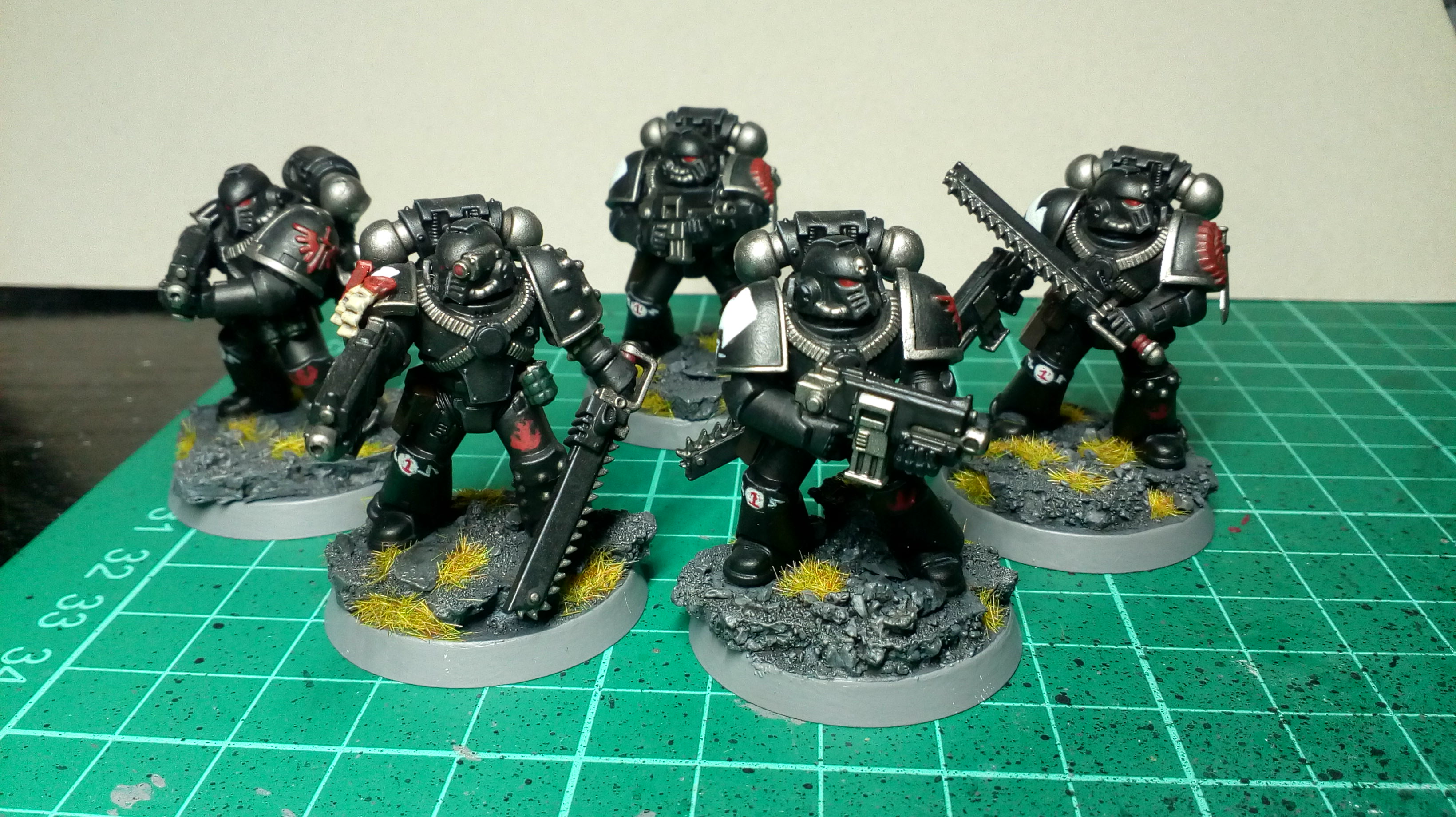 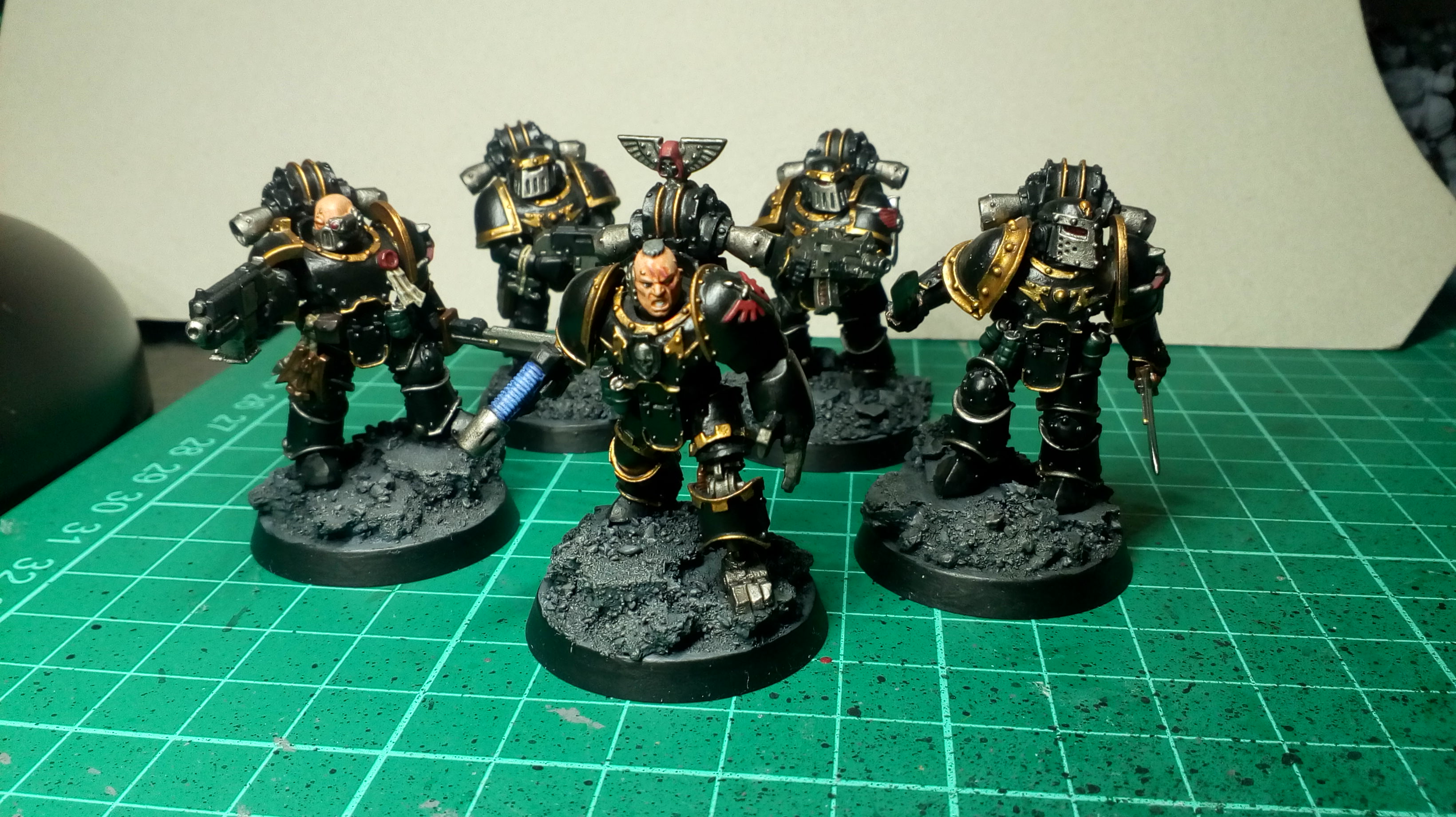 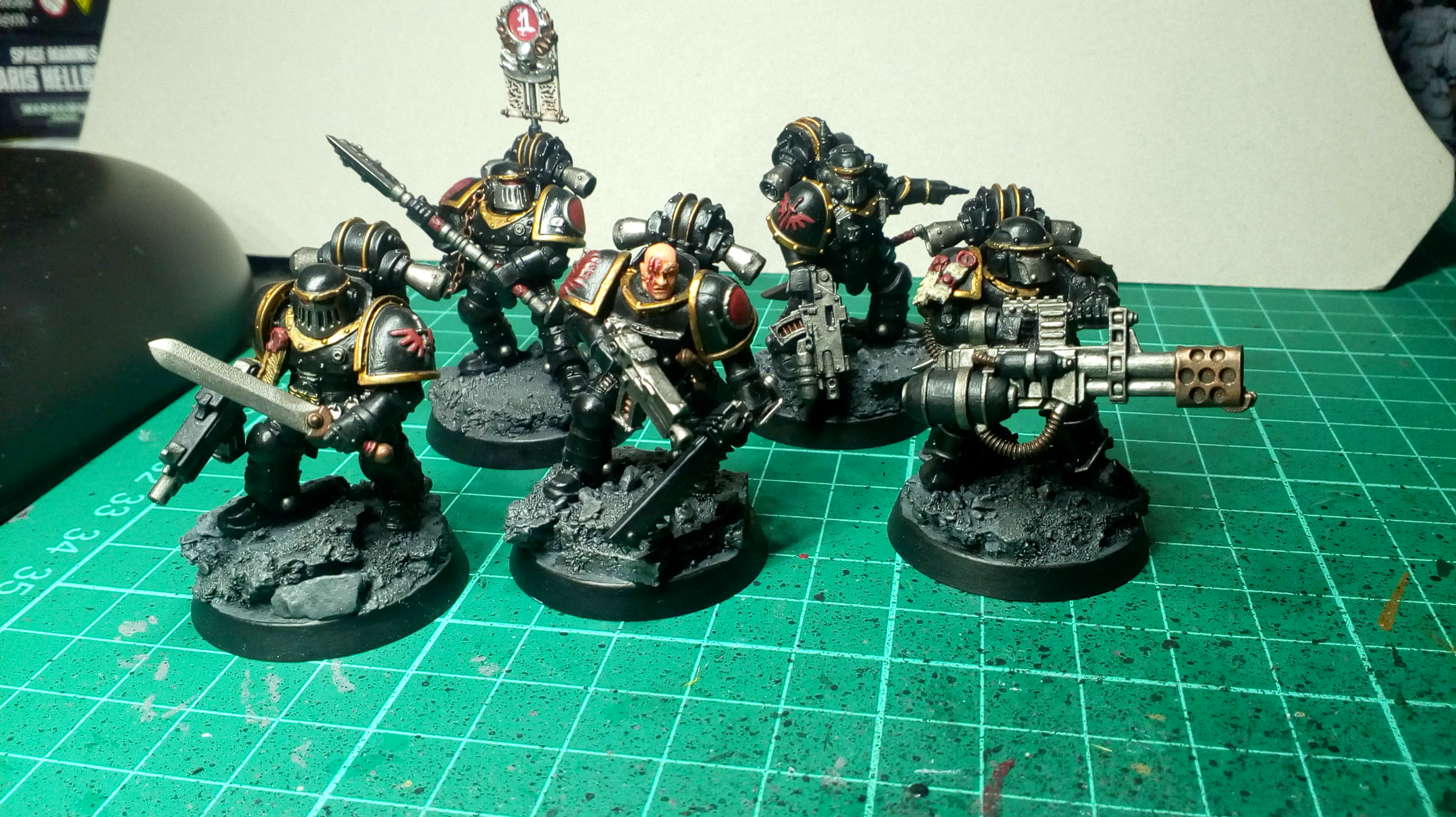 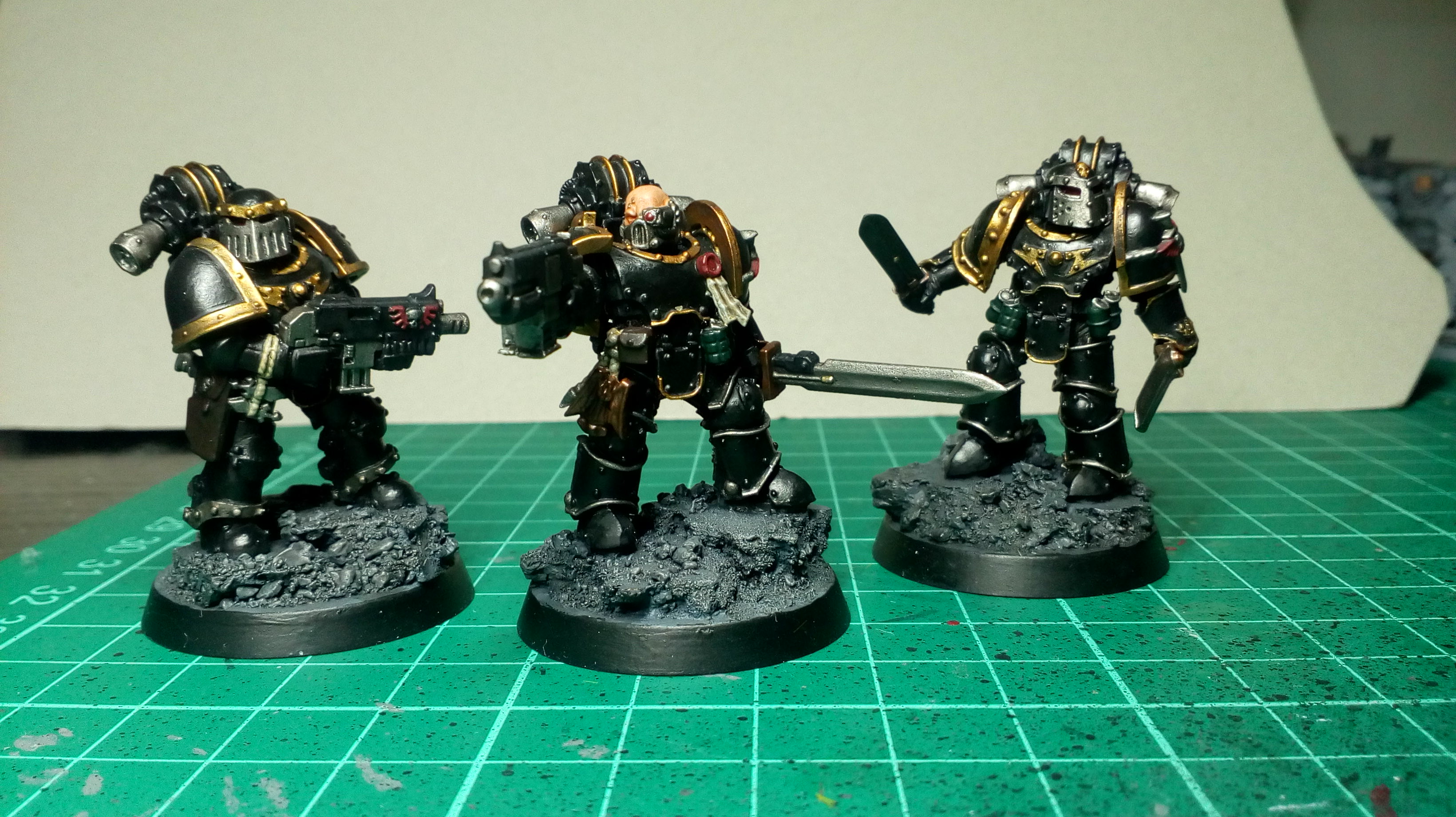 Thank you for the kind words brothers!

Sorry there's quite a long gap between updates, hopefully they're worth the wait

. Currently trying to decide whether the rims of the bases should be black or light grey. Any thoughts?

@ sockwithaticket: Yeah, that's my least favourite of the Paladins as well, so I'll probably transfer him to my 40k army and build another one. Not necessarily because of the Mark 3 helm, but the robes on the Dark Vengeance Captain feel a bit too elaborate for a 30K Dark Angel.