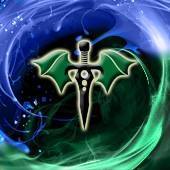 Formed during the Great Crusade from the great armies of Invalice Major, known as the Lahvu. When the Imperium arrived and the language of Invalice had been translated they became known by a new name. They were the Invalacian Legions. Some Imperial officials took offence at this as only the Astartes were legion and lesser warriors should not take the name. However after fighting alongside the natives of the far flung world Lion El'Jonson defended the name, declaring that it was a fitting name for the armies of Invalice.

During the Heresy many Legions were recalled to Invalice to defend the system from the Warmaster's forces. Being so far from many Loyalist forces and suffering attacks from the Night Lords and their allies and forced to rely on the Legions after Dark Angels forces were recalled for unknown reasons.

After the Heresy contact was lost with the Invalice system, whether the location of the distant system was lost or hidden is unknown. Until the Angels of Shadow Chapter rediscovered the system in the first century of the 35th Millennium, the wargear of the Legions had changed very little since last contact, much of which had to be surrendered to the Adeptus Mechanicus. However, again thanks to Astartes intervention, the Legions were able to keep several of the STC to a number of machines and weapons so that the Legions could remain at “optimal levels of combat readiness”. At the closing of the 41st Millennium the troopers of the Invalacian Legions appear to be armed with antiquated armour and weaponry, albeit updated to match their peers in other regiments.

The Dark Angels Legion discovers the Invalice system, and a small Legion outpost is established. The native warriors, known as the Lahvu, are organised into the Invalacian Legions. The name causes some controversy, but Lion El'Jonson himself puts a stop to any dissenters.

During the Heresy, Invalice suffers greatly at the hands of the Night Lords and their allies. Many of the Invalacian Legions are recalled to defend their home, and many lives are lost.

With a heavy heart, the Dark Angels are recalled to Ultramar to defend the short-lived Imperium Secundus. El'jonson swears he will return to cleanse the Invalice system of the Traitor Legionnaires but is never heard from again.

The Angels of Shadow Astartes Chapter, following recently uncovered records within The Rock, make haste for a rumoured supply cache to prepare for the predicted troubles of the Nova Terra Interregnum. They young Chapter rediscovers the Invalice system, and are mistaken for the Dark Angels Legion. Shortly after they make Invalice Major their home.

After a small Imperial force arrives to inspect the system, after the support of the Angels of Shadow, the Legions which have survived with outdated weapons are brought into the new era of warfare with new gear and machines. However, they retain many older models such as the Malcador Heavy Tank due to millennia of familiarity.

The first major battle for any Invalacian Legion in the Nova Terra Interregnum would be fought by the 501st Legion. Attached Administratum adepts attached to the Legion were not only stunned by the effectiveness of the “untested” Legion, but the ferocity with which they fought. The conflict lasted only three weeks, with the 501st sustaining only 34 per cent of their projected losses.

The 7th Legion's 212th Battalion were sent to the planet Chordelis in the Tarsis Ultra system. The planet, a quiet civilised world famed for its orbital dockyards had come under attack by a pirate force of substantial size. In daring ship-to-ship assaults the men and women of the 212th took apart the pirate fleet with swift boarding actions. Chasing the pirates to the ground, the 212th surrounded and annihilated the raiders.

Siege of New Nostramo
Under the command of Inquisitors Krell, Tiin, Tano and Offee, a force of both the 501st and 7th Regiments laid siege to the planetoid designated “New Nostramo” by the Night Lords warband under the ruthless leadership of Chaos Lord Kalex Maas. The world was locked in perpetual night by the effects of ritual slaughter committed by the Night Lords, but the Invalacian Legions fought with nearly reckless abandon as they laid waste to the unholy structures on the planet, seeking recompense for the hurt inflicted upon their kin in the Horus Heresy. Rumours persist that Inquisitor Krell was a double agent, causing a terrible incident where Invalacian forces fired upon each other. Krell would be confirmed deceased by the other Inquisitors, apparently calling an artillery strike upon himself.

The King of Deronia declared that his world would no longer be a part of the Imperium, and that he feared no retribution for such an action. He even demanded that surrounding systems declare their independence from the Imperium and swear loyalty to the Deronian banner for protection. When the predictable sanction descended on Deronia it was met with unexpected violence, for the people had armed themselves with xenos weaponry. So it fell to Stormtrooper strike teams from the 501st to retake the planet, performing assassinations and hit and run attacks on vital infrastructure. The leadership crippled, loyalist forces rose up and retook the planet. As reward for the actions, the loyalists' families only had to submit 98% of their wealth and only nine out of ten families were sent to penal colonies rather than the 100% of the traitors that were turned into servitors.

Following the fall of the Angels of Shadow's 8th Dark Master, Sulln Hauntlight, the Invalice system breaks out into conflict. Several Legions side with Hauntlight and his splinter group, the Angels of Light. Hundreds of thousands are slain in the conflict

It takes over a century to defeat the heretical forces, after which the world of Chokehold is reduced to a barren rock. Vast numbers of the Legions have to be slain in an act of mercy, many of which succumbing to madness. Survivors have their minds wiped, and the whole event is covered up.

The preferred style of combat of each of the Legions is as varied as the foes they face. Despite this many of the Legions have a similar approach to war at their core, operating with a ratio of 3:1 Infantry to Armoured Companies.

Some Legions, like the 7th, have a higher number of armoured companies and even whole artillery companies. Others, such as the 104th, have a preference for airborne insertions and operate alongside increased numbers of Navy assets.

One thing of note is a total lack of abhuman auxiliary forces, for the Legions recruit exclusively from the Invalice system, to which contains no abhumans. They are generally viewed with disdain, worth even less than trained beasts rather than being related to men.

Example of a Trooper

Example of a Sergeant

Example of a Commando

Since their homeworld was brought back into the Imperium, the regiments of Invalice have performed their duty with honour and distinction. As with any force of Astra Militarum, some regiments have been lost to history while others are an amalgamation of two depleted regiments. Some of the Regiments have gone on to become well known, building their own legacies.

The oldest surviving regiment of the Invalice Legions, the 501st has the longest list of accolades of their kin. Some jealous commanders point out that as the oldest Invalacian Legion that they would naturally have the most honours, to which the Invalacians respond that such sentiment is insult to the glories of the dead.

Officially designated as a Drop Troop regiment despite primarily being an armoured regiment, the 7th Legion excel at aerial insertions, able to take and form beachheads in the most difficult of terrain. Most of their artillery are mounted on carriages and the like, able to be deployed and set up with lightning speed or towed behind their many vehicles. One of their most famous victories was the assault on the planet Euepa Tau Prime, striking from orbit and taking the capitol city within a week despite the fact that it was nestled in the walls of one of the gargantuan sinkholes that covered the planet.

Known by the moniker of the Thorn Wolves, named after beast of the same name from their homeworld, the 104th Legion are particularly fierce. Frequently painting icons of predatory creatures upon their armour, the 104th are a light infantry regiment famous for their ambush tactics, stalking their foes for days or even weeks before a sudden and lethal strike from all directions.

Also tagged with one or more of these keywords: Astra Militarum, Regiments