316 replies to this topic

Sentinel Damate was one of several Ist Legion praetors to succeed a fallen superior during the Koloss Syntheticide. He assumed command of the Tenth during the frenetic battle of Djeten, holding his Maniple together in the face of several counterattacks by the Koloss AI’s lethal constructs. From that point his ascent was rapid, and he won further honours in the Ark Reach campaign, earning no small praise from the Dune Serpents and Halcyon Wardens he fought beside. However, like many of his fellows he struggled to come to terms with the Emperor’s perceived passing over of his Primarch. It can be surmised that Icarion found it easy to sway Damate to his rebellion, and fragmentary sources implicate him in corrupting Malis of the Halcyon Wardens.

After Raiden Athrawes, Damate was the most senior Marshal present in the Madrigal system on the Day of Revelation, commanding the Goliath-class battleship Fury of the First Son. Still stationed aboard this vessel, he was the first to give chase when Pyrrhicles defied Icarion. In the pursuit, Damate saw to the capture or destruction of several Vth Legion vessels, working in tandem with the turncoat Halcyon Wardens led by Malis and putting the Loyalists to the sword. However, Damate would not join Athrawes’ departure from the system, instead rendezvousing with the larger fleet which Susanoo Empyon was already gathering at Kurryth. The Tenth Maniple and their auxiliary forces were now required for outright conquest, rather than their intended escort mission to Terra.

Damate wears a suit of Akira-subtype Mk IV power armour, heavily artificered and newly repainted in the storm-grey of the renamed Harbingers. The Ist served as a test-bed for every mark of power armour until the advent of Mk V and VI, which other Legions were much more predisposed towards using. As such, distinctive sub-patterns were commonplace among the Harbingers, and their artificers became expert in developing advanced systems for their suits. Damate’s power sword likewise conforms to the idiosyncrasies of his Legion, while for a firearm he bears a volkite charger of the kind that remained common among the Harbingers.

@Blunt, Griff, Simison: you guys have done well by the spirit of the Lightning Bearers/Harbingers. I've really enjoyed reading through your work on them on this thread and throughout the BotL forum. Thank you for taking such good care of them.

I've been itching to get back into 30k, after a long hiatus, and that is largely because of your work here.

I do have one little point of correction, that has amusingly snuck into the lore of the Harbingers.

I was reading in another thread that someone wanted to write about a conversation between primarchs on what the symbolism of the legions armor color was and this lead to a small problem.

Their armor has always been grey, not white.

in a great majority of the lore I've read for this universe, the Lightning bearers are described as having white armor.

I think it started with Algrim whitefangs profiles of them years ago. The fan work he had created for them showed them in white armor. I had asked him to correct them back then when he created them on his own for my project log but he never really did, and so It seems that they have crept from grey to white.

Now this isn't the biggest deal but there was symbolism behind their color scheme that was lost.

They were meant to have kept the same grey they wore during the unification wars, which was described in book 1 betrayal as "stormcloud grey"

When Icarion took over and named them the Lightning Bearers, he altered their heraldry by painting their pauldrons black to represent the heavens into which they would rise.  His symbol the "storm-star" was meant to represent their place as a guiding beacon in the heavens/light in the dark, and so was adopted as their new legion symbol.

However, he decided to keep their base grey armor, to both honor their acts during the unification wars and to show that their role as the Emperors liberators had not changed. 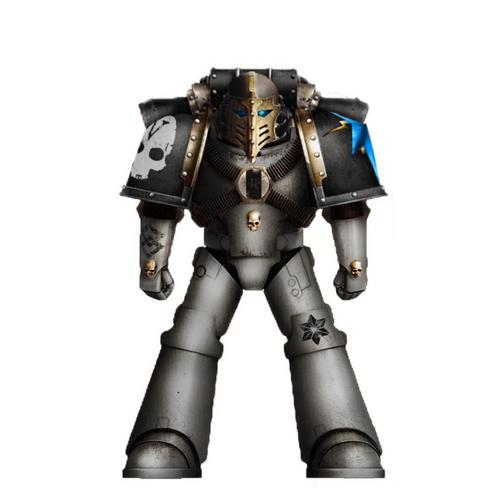 Oops. I remember you mentioning the grey when renaming the LB to the Harbingers, and I guess I misunderstood (along with everyone else). Hmm, I'm not sure if we can fix that one.

Nice to have you back, Athrawes.

Maybe we can keep the change of colors as a sign of their downfall.

Amazing, the things we miss. That said, thanks for your words, I'd be mortified if we'd taken them in the wrong direction.

Any thoughts about the recent Second Son posts? Not sure if they are of good quality or not.

A bit too cheery and verbose for the Lightning Bearers, I'd say.

Checked with Athrawes about the character, and he says he's on target. Was more concerned if the writing structure looked bad.

Question, are the Rakurai composed of both genders?

They could be, never thought about it

They could be, never thought about it

I want to introduce a concept to you: Onna-bugeisha. Noblewoman who had been trained in military arts to serve as an emergency reserve, especially to defend the home. I'd like to incorporate them, but I'm not sure how. I don't know if we want to add them somehow to the Rakurai (Solar-Auxilia-pattern) or the Ashigaru (Imperial-Army-pattern) units.

You have any reactions?

Tbh, that would only really work in terms of militia, rather than the crusading armies.
Also I'd stay clear of Ashigaru, as Yamatar has the Ashigat.

Tbh, that would only really work in terms of militia, rather than the crusading armies.
Also I'd stay clear of Ashigaru, as Yamatar has the Ashigat.

It could be as simple as keeping the name for an elite, all-female unit as well. We don't have to maintain a direct connection between the two.

Does Madrigal have anything less than the Rakurai?

Nope. I figure that the soldiers of a Legion homeworld are going to be trained to Cadian standards in any case.

In which case, would it be better to feature the Onna within the Rakurai, just the homeworld regiments, or saved for later?

within, I think - assuming there's really a division

Can I have a full run-down?

I think there was Dark Eldar torture-tech involved.

Can you at least tell me when he lost his powers and what kind of powers he had?

He had the standard precognition and lost it about 50 years before Qarith.