Hello all, this thread will be dedicated to my chaos space marines warband, the Oathbreakers.

In order to make it nicer, I'll try to write some kind of story for each of my characters/squads, that way they get their own identity.
I apologise in advance for the abysmal quality of the pictures, as they were done in pretty bad lighting conditions.

(Also is there an option somewhere to hide spoilers? That way people that don't want to read the text don't have to scroll too much)

Sergeant Thitos – The Butcher of the Trenches:

With a scream of rage his Chainsword went down crashing, burying itself deep within the last Imperial Guard’s chest.
The Marine stood still for a few seconds to look around him and to contemplate the carnage he had created. Everywhere around him the bodies of a squad of Krieg guardsmen lay strewn, their blood mixing itself with the mud of the trenches.
“Section clear, you may advance” he screamed into his vox between two explosions. “To your orders Sergeant Tithos” a metallic voice answered.
Almost immediately, nine other marines appeared behind him, weapons drawn, some of them still smoking at the barrel.
“You know your mission, purge these trenches of any Krieg personnel and establish a bridgehead for our brothers.”
“Sir yes Sir!” Nine distorted voices came through his Vox.
As he was about to say something more, a rain of lasbolts and Bolter projectiles interrupted him, forcing him and his men to take cover.
Some twenty meters from his position, a small squad of Kriegers, led by what seemed to be a Commissar were firing at them.
“Cover me, these are mine!” he screamed at his men while running in the Guard’s direction his Chainsword whirring menacingly…

He hit their lines like a meteor, his chainsword eviscerating one guard before he could even react. A raging punch made quick business of the second, while a third one died from a savage headbutt.
Soon enough only the Commissar was left, his power sword drawn and bloodshot eyes.
“Mortal, your time has come.” Tithos said in an amused tone. The Imperials never failed to impress him with their senseless bravery.
“My honour is loyalty, and as a loyal servant to the Throne I will die for it.” The Commissar answered in what was to be a determined answer but sounded more like a stressed whimper.
“More blood for the blood god” Tithos screamed, the rage in him was returning while his vision was turning red, only blood mattered now. Blood and carnage…
He parried a blow of the young Commissar before counterattacking with a vicious strike that his attacker blocked at the last moment, almost breaking his power sword in the process.
Then as unexpected as it was quick his other hand plunged his combat knife deep into the Commissar’s abdomen.
“Is this the best the Imperium has to offer?” Tithos roared with anger while looking up to the sky “I want to kill!” 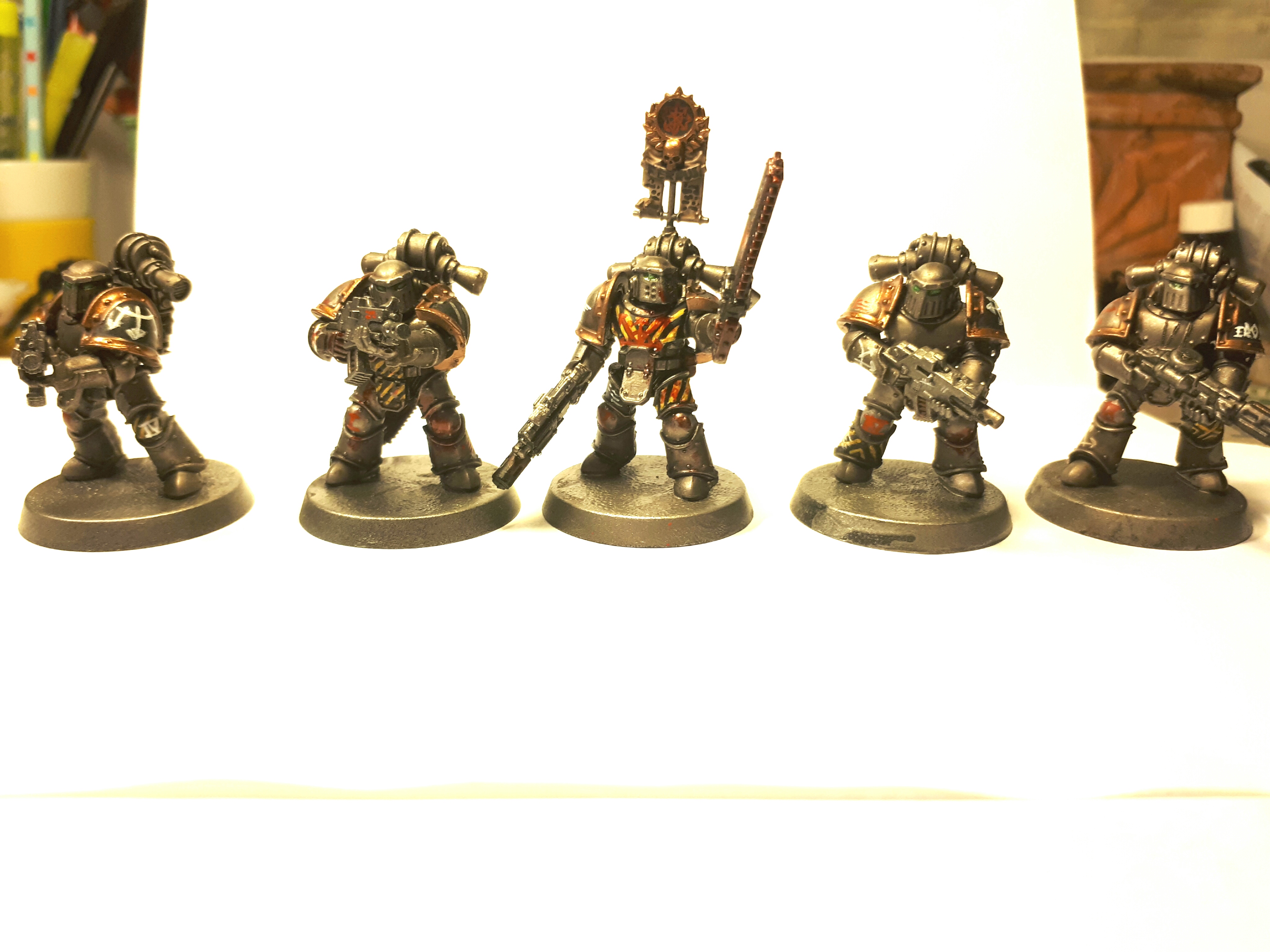 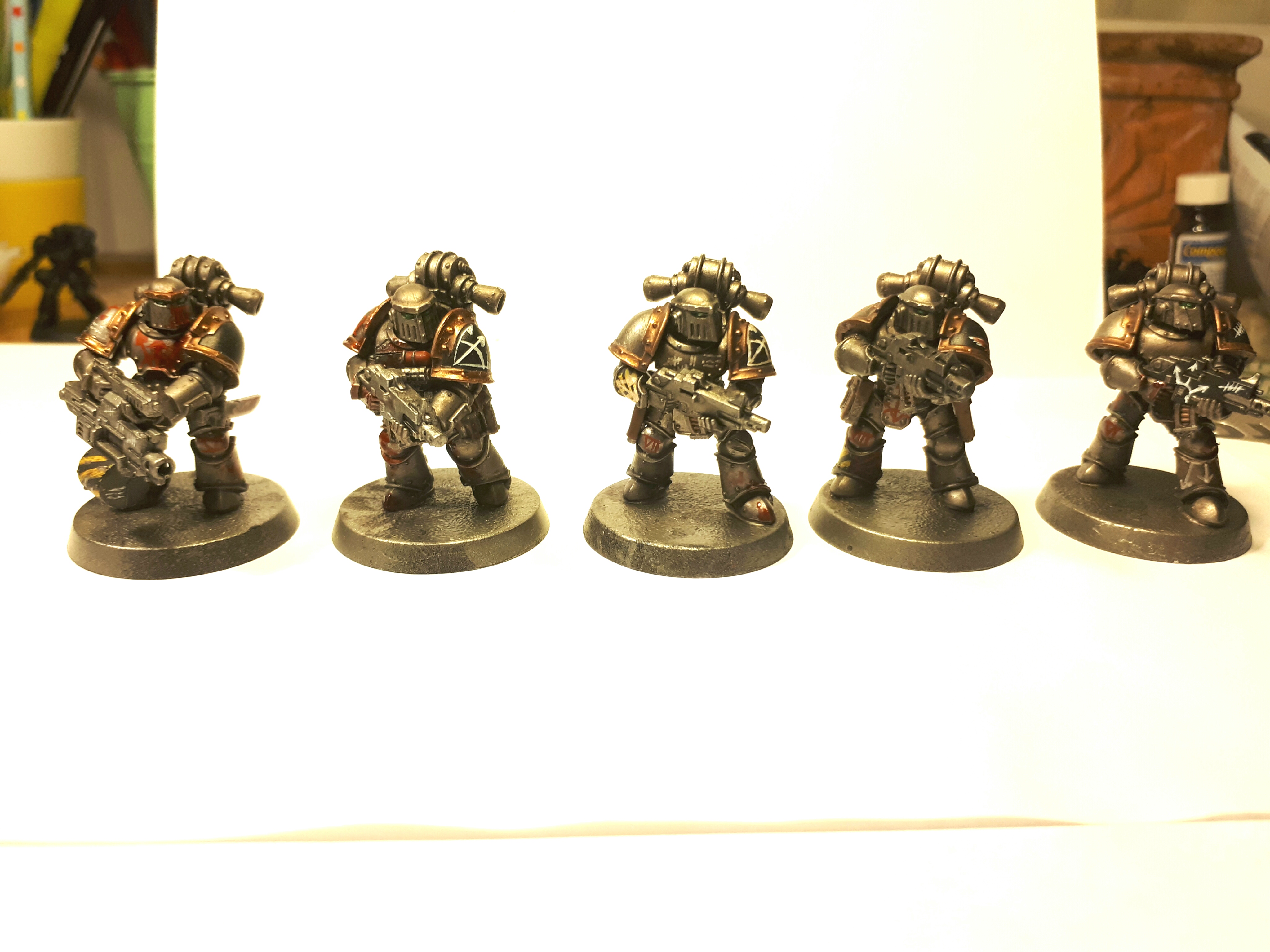 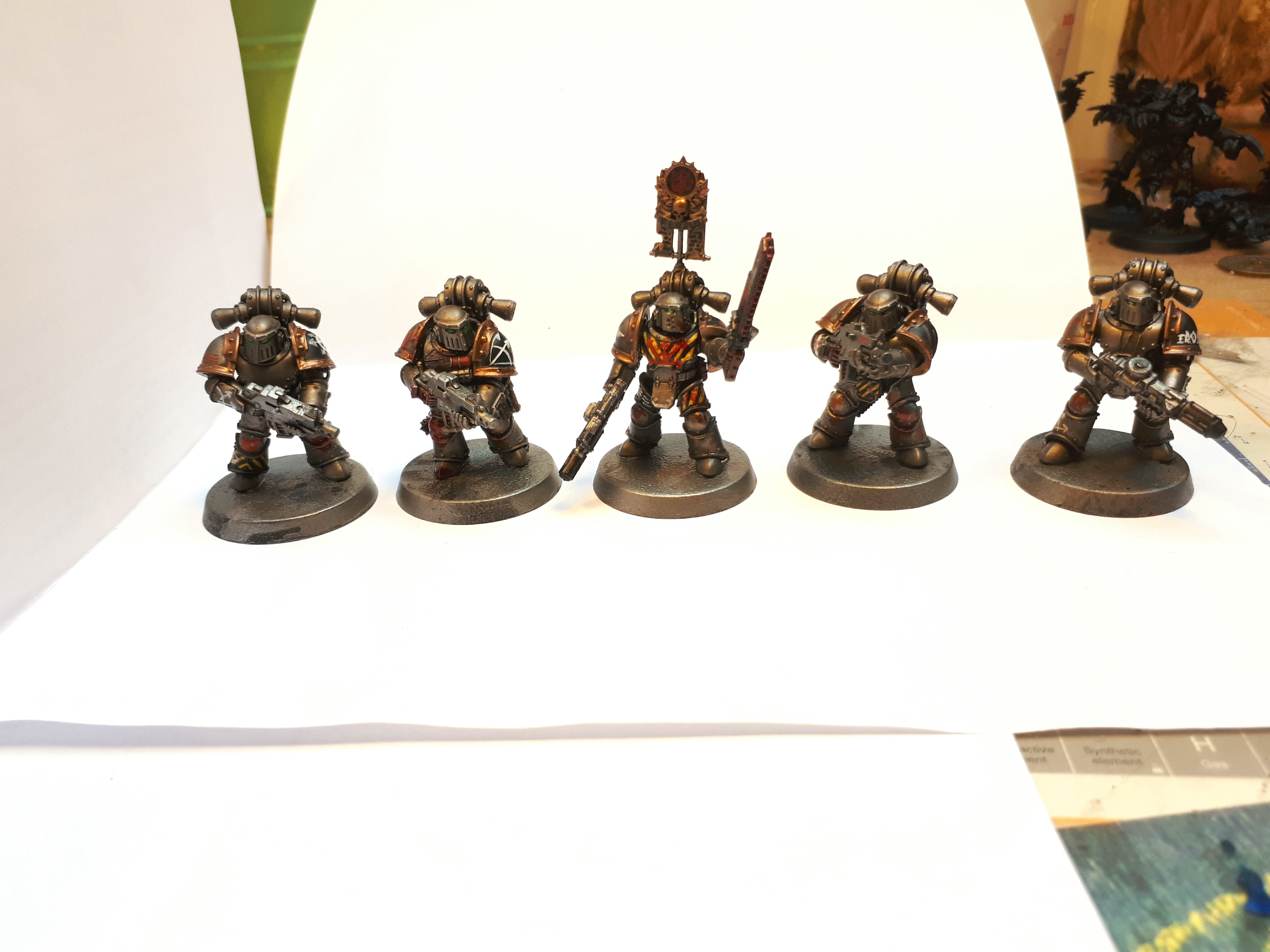 Small update today focusing on my first Unit if Night Lords that I painted some time ago.
As always, feel free to c&c. If you want close ups of certain marines don't hesitate

Night was falling on Trantor V, and in every casino, people dressed in their best garments rushed to the gambling tables, eager to test their luck and to defy the odds.

The smell of exotic spices hung heavy in the air, while luxuriously dressed slaves rushed to their masters with plates filled with food. Downhill, spectators were energetically placing their bets on the announced Ghara race, before anxiously staring at the track once the signal had been given.

Trantor V was referred to as a paradise world in the archives of the Adeptus Administratum, a world owned and used by as a place of vacation for the officers of the Munitorum and those that had gotten rich by selling them weapons.
Here, sealed off from the rest of the Imperium, immense sums of money were lost and gained each day, while on countless battlefields in the same sector, millions of soldiers died.

Night had finally fallen, and the seemingly innocent gambling had turned into something darker and more depraved, the senses of the masters being further dulled by the bizarre narcotics they pumped into their veins.

With a psychotic scream he kicked open the doors to the main casino. In midnight clad, his weapons ready.
The doors opened with a bang, revealing a busy room, filled to the brim with people whose well-nourished and pristine faces denoted their belonging to the Imperial elite.
As more and more of them turned towards him and his brothers, a heavy silence fell upon the room.

“Good evening, allow me to introduce myself, I am Sergeant Dhara of the 26th Company of the Night Lords. Is this the Excelsior Casino of Trantor V?”
Only silence answered his question, followed by a platoon of exquisitely dressed security officers pouring into the room from various smaller exits. They had all readied their Lasguns and were now aiming at Dhara and his men.

“Sacrificing your slaves to protect your own lives. Is this the courage of the Imperial Nobility?” Dhara scoffed while advancing. His men following him closely.
He stopped in front of one the officers.
“N-Not a step more! Freeze!” he screamed in a trembling voice
“Or what?” asked the Sergeant, “will you kill me? Don’t lie to yourself. You’d be dead before having pressed that trigger”
“What are you waiting for soldier?! Fire” roared someone in the background, an older officer with a reddish face covered in sweat, his broad chest covered with medals encased in a ceremonial dress too tight for his massive weight.
“Go on,” said Dhara in an inviting tone. “Do it.”
After what seemed like an eternity, the guard collapsed his mouth frothing. Dhara simply shrugged before walking over the corpse and further into the room.
“Lock the doors,” he ordered to one of his men. He took a seat on one of the tables that had hosted some old terran card game, pushing aside piles of chips that represented more money than any imperial citizen could make in his entire lifetime.
“As said before, I am sergeant Dhara of the Night Lords, and as we’re speaking, your fellow nobles are being rounded up in the exact same way in the other casinos and whorehouses of the planet. We’ll slaughter most of you, taking only the able bodied to serve us as slaves. Do you understand that mortals?”
“This is scandalous,” roared the same officer as before, his bloated face now completely red. “I demand that this farce cease immed-“. He never got to finish his sentence, a smoking hole standing where his face once was. He fell to the ground with a thud.
“Well,” Dhara said menacingly, “if this is how you want to do it… Ave Dominus Nox, the Oathbreakers have come for you!” he roared.
And then the slaughter began… 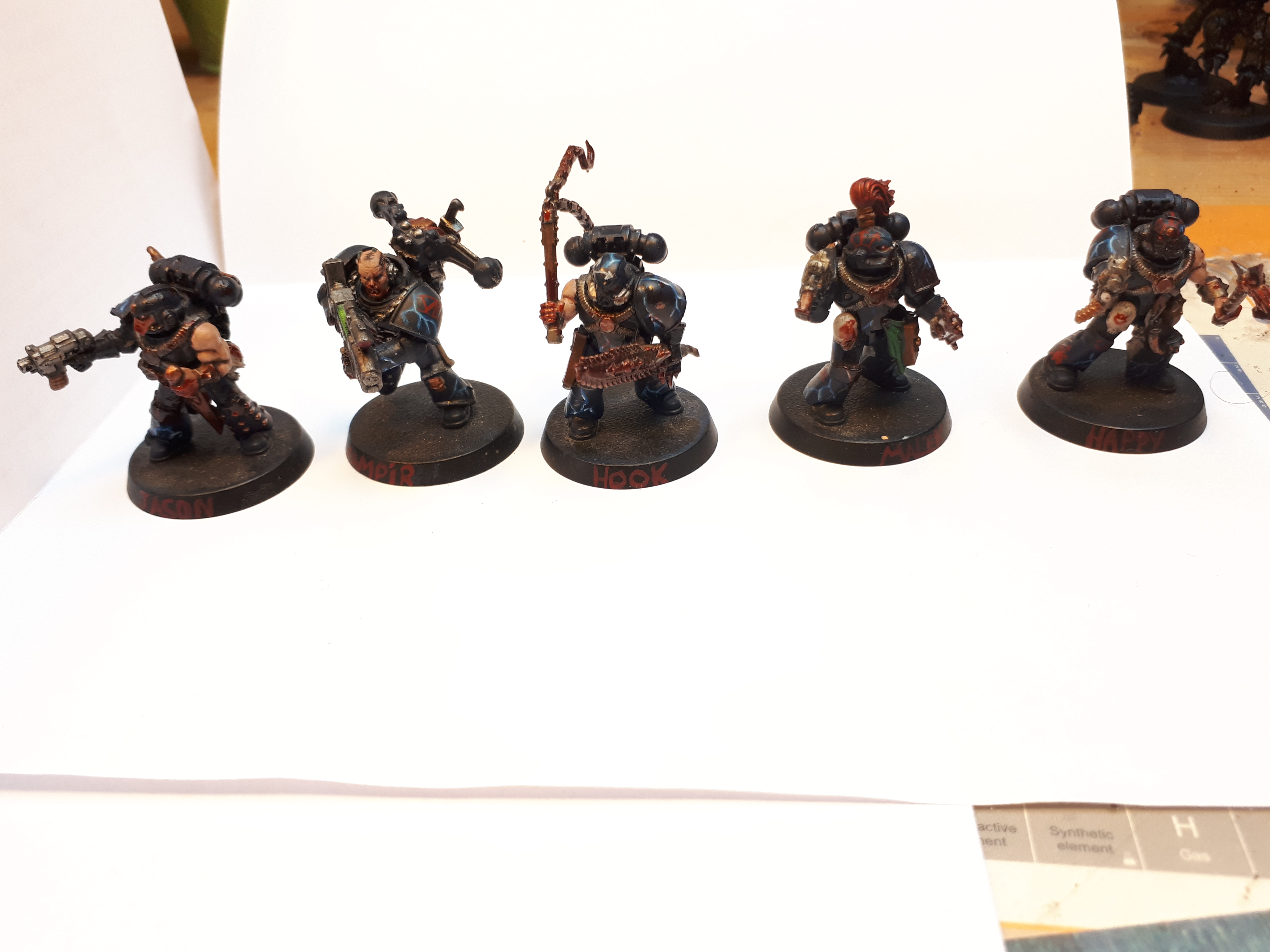 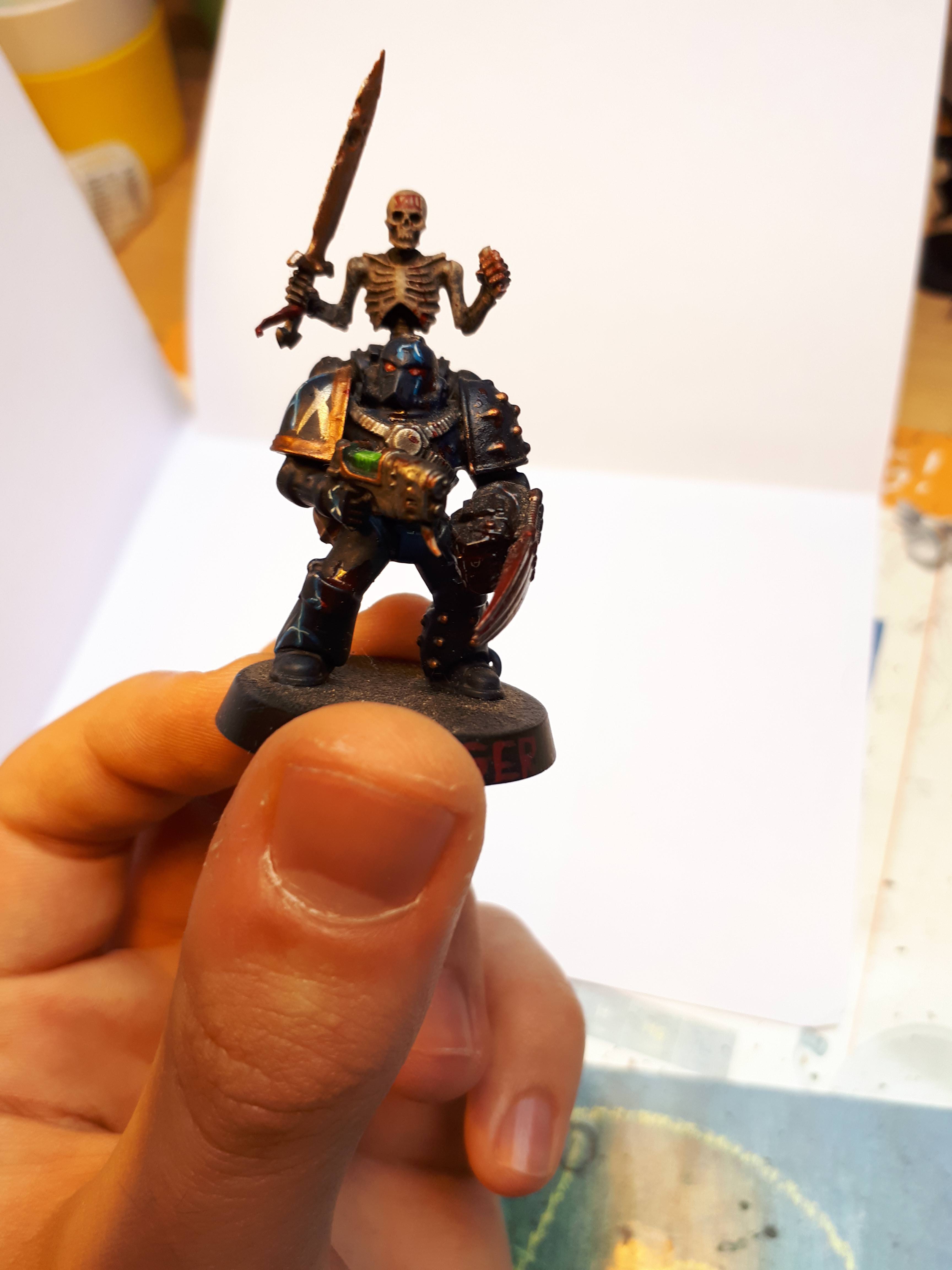 Liking the use of Marauder parts with the Night Lords.

The chaos stars on the Iron Warriors look good too; I've just started experimenting with freehanding my own.

Looking great! I especially like the effect you have gotten with their eyes!

"It is the great irony of the Legiones Astartes: engineered to kill to achieve a victory of peace that they can then be no part of."

first of all, merry belated Xmas to you all, I hope santa has brought everyone his share of figurines to paint!

Looking great! I especially like the effect you have gotten with their eyes!

Thanks mate!
It's actually quite easy, I can make a tutorial if you want

Liking the use of Marauder parts with the Night Lords.

Thanks. I used them to give them a more savage look and to differentiate them from their brothers of the 4th

Secondly, here's a small update on what I'm working on between study breaks for my finals. My Warp Talon unit, led by the fearsome Ghar of the Bleeding Hands, whose fluff you'll soon read.
So here's a small photo of the unit as well as my test model.

That's all for today,
C&C welcome as always! 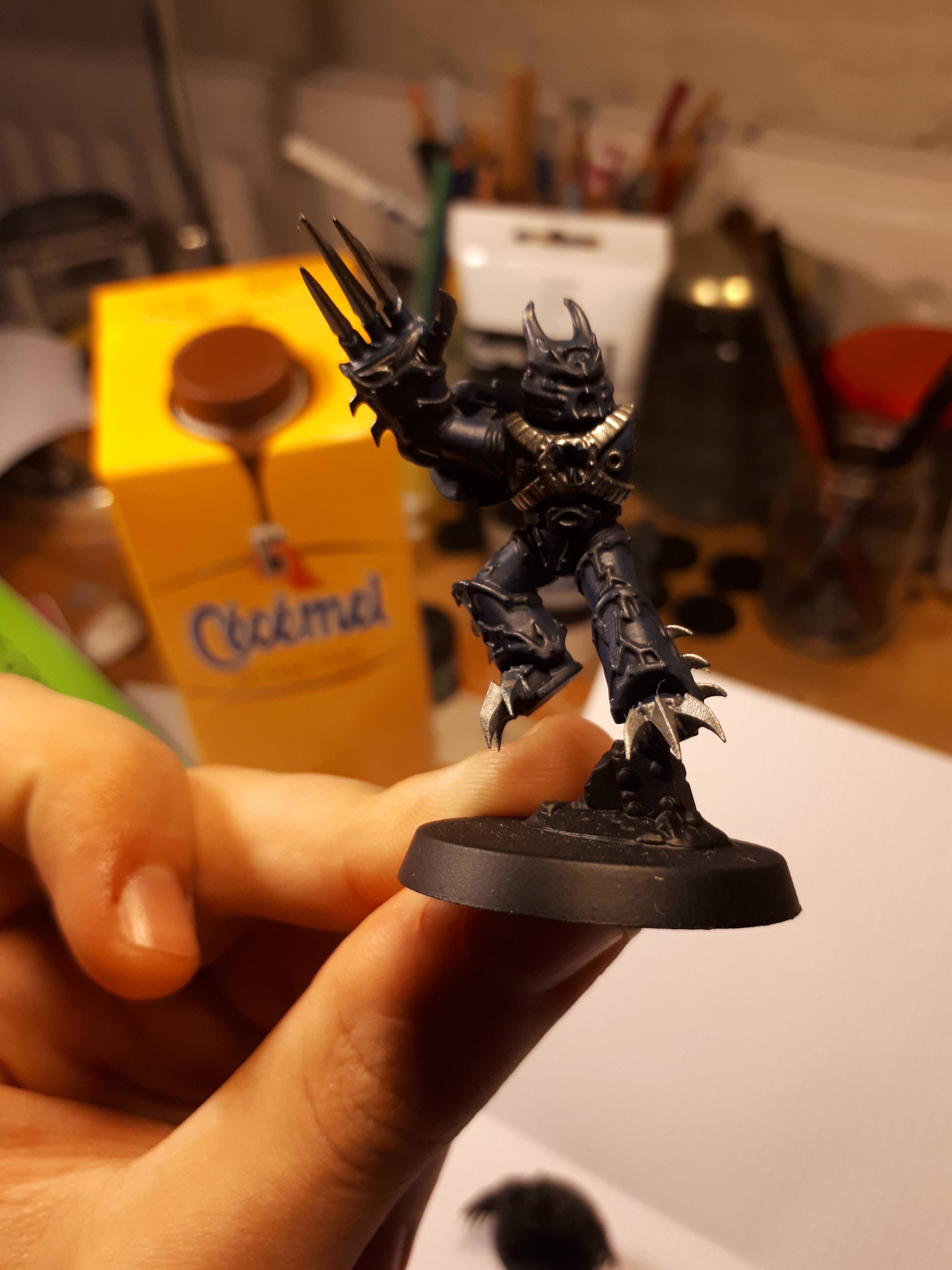 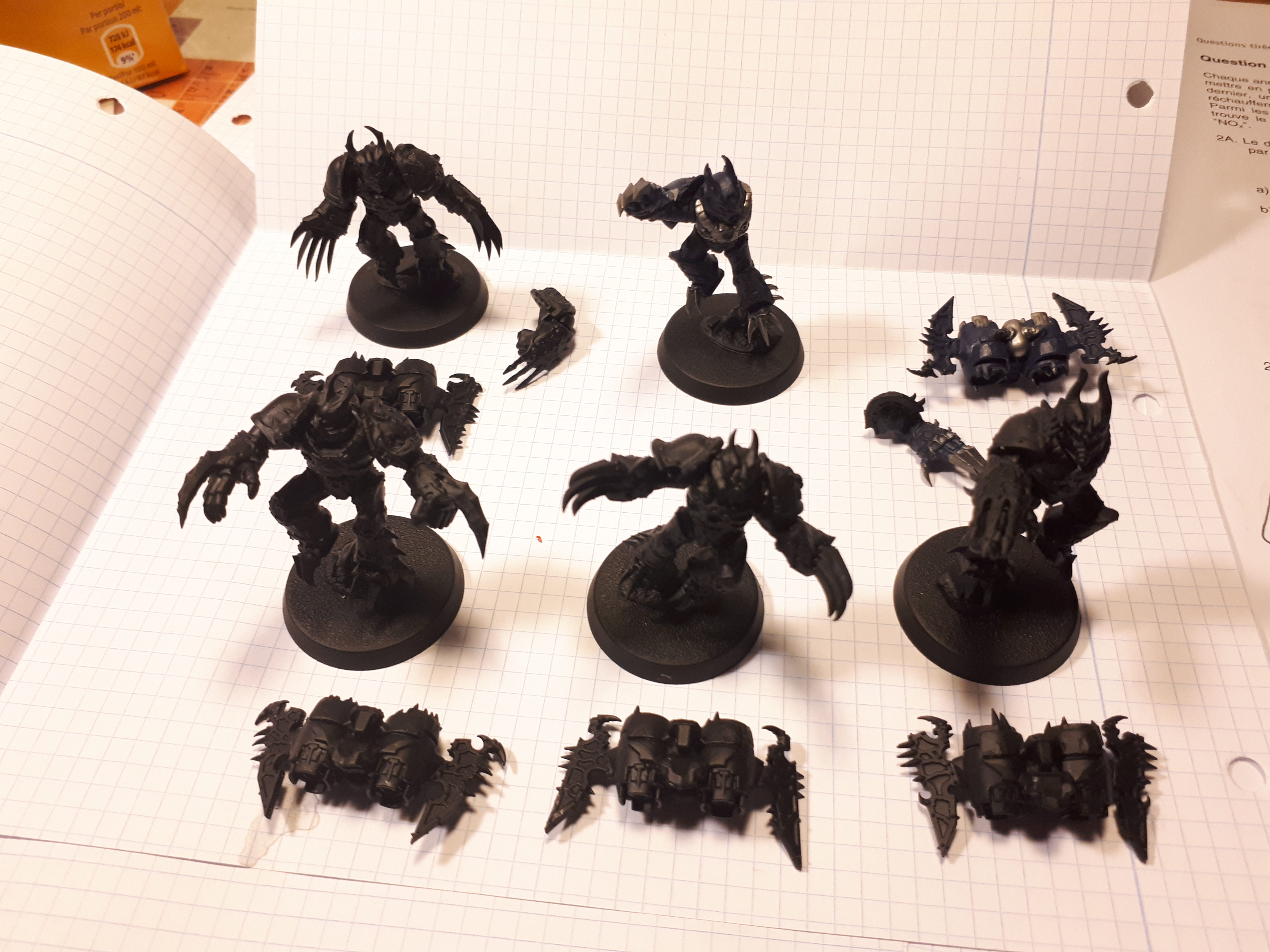 Greetings from the warp,

I'm back with a small update on my Warp Talon test model, painted between study breaks. I'm almost done with it, but I need still need to do the eye lenses as well as the cables on his face.
I however do not know whether I should paint these in red or in green.
Your opinion is more than welcome on this one, as well as any other criticism about the model in itself! 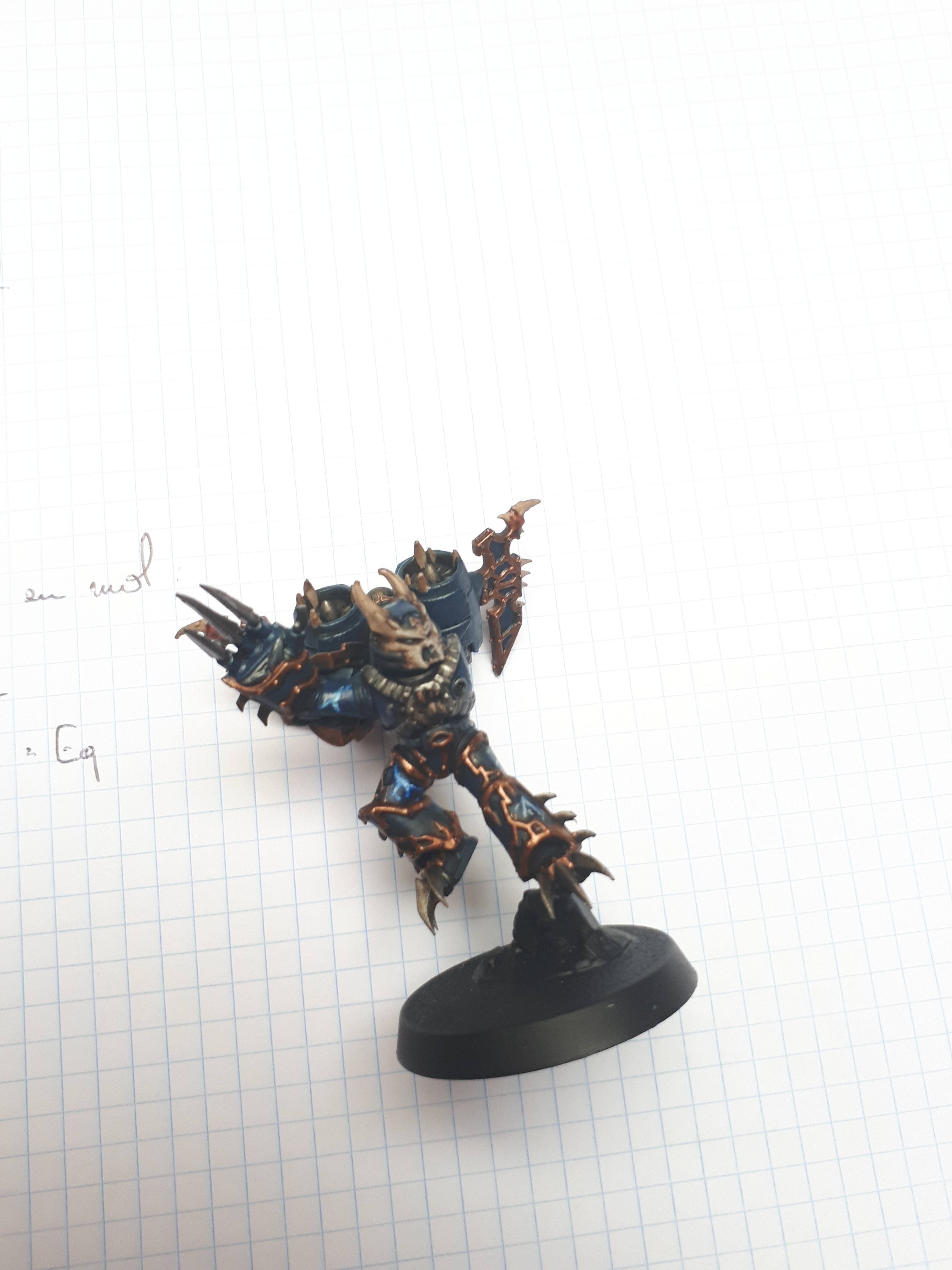 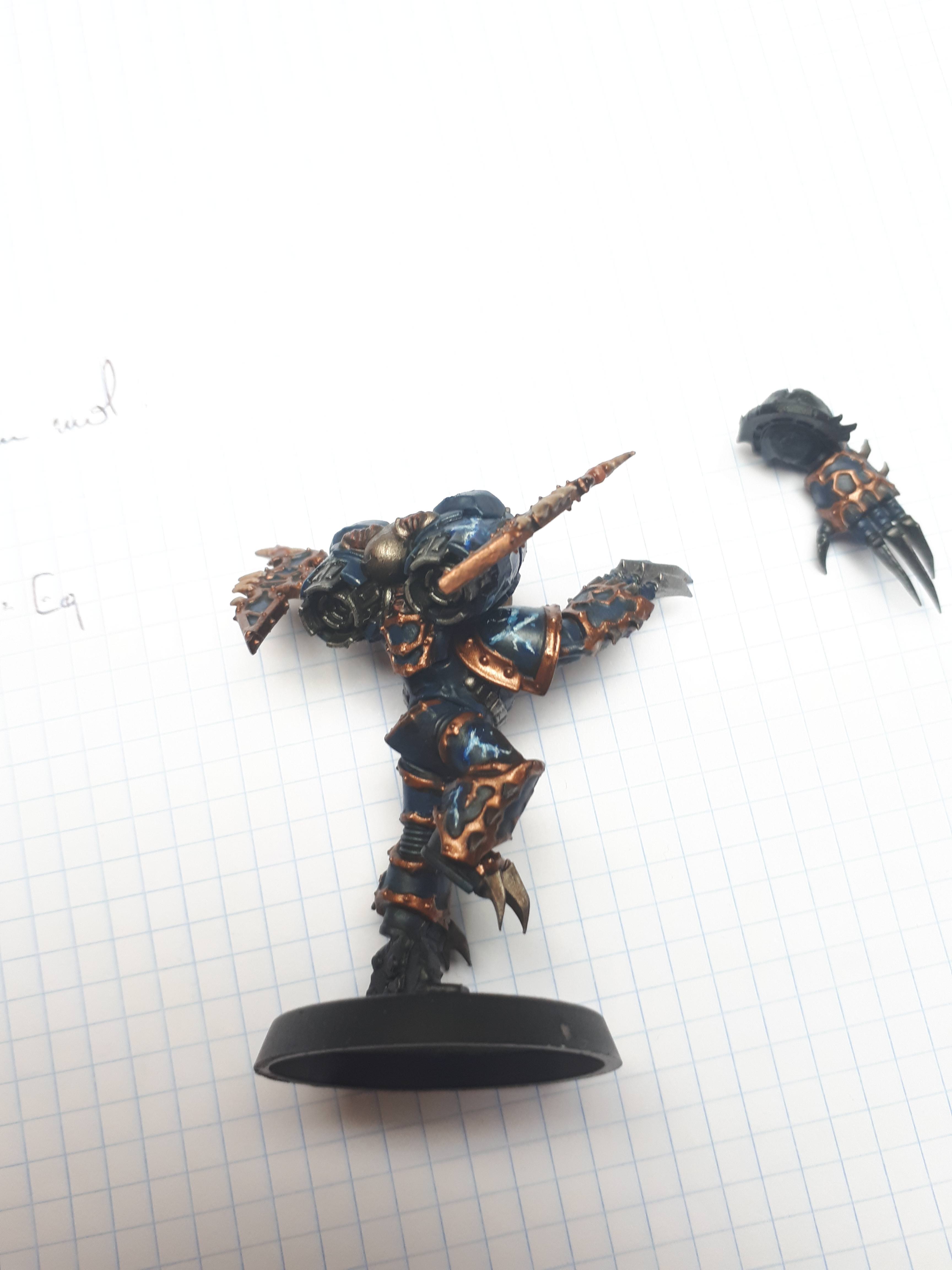