So, a new year, now it's time for a new army. This will be the log for my Mantis Warriors army, depicting the 5th Company of the Chapter in the 42nd Millennium, following the Indomitus Crusade. 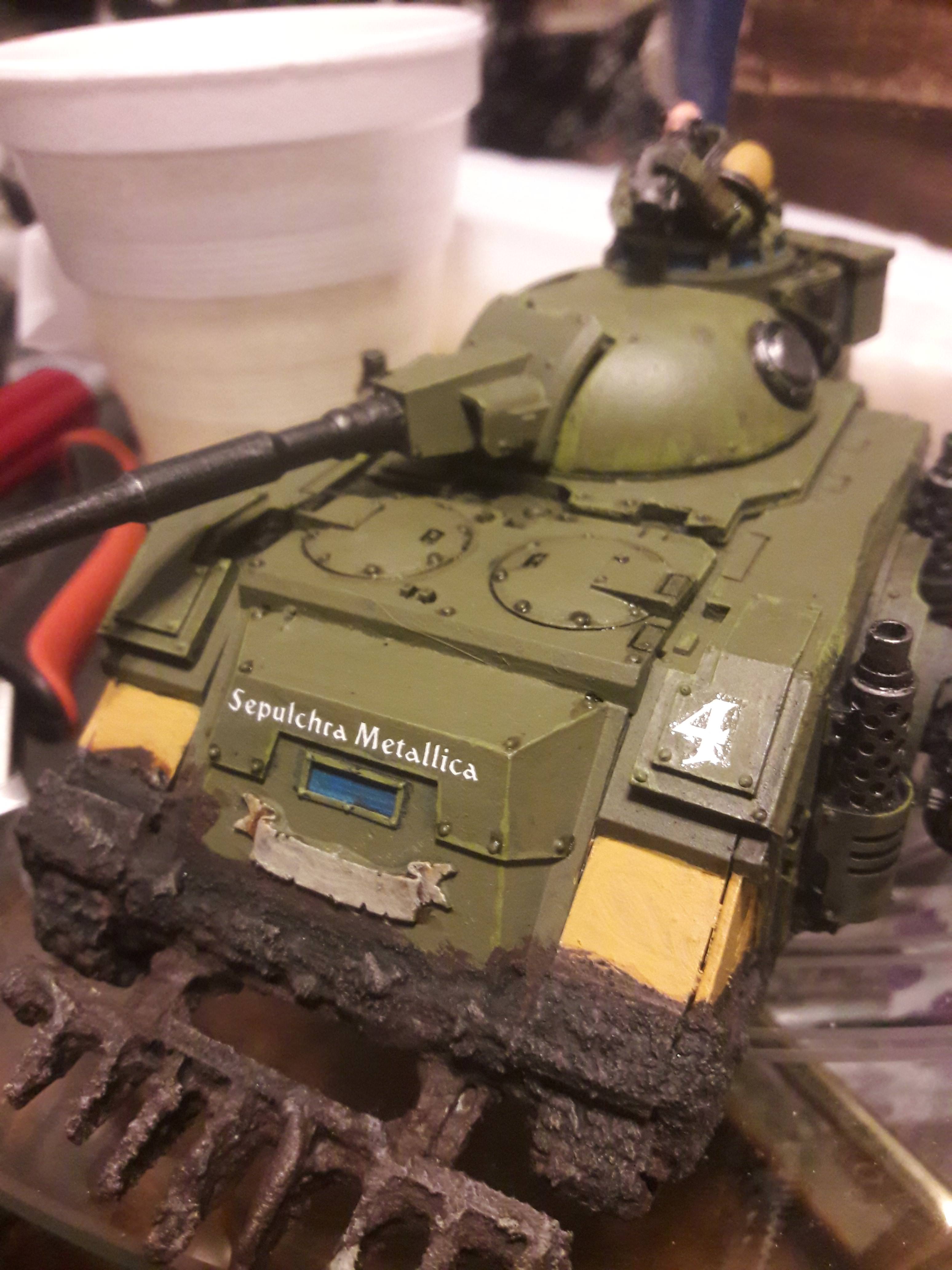 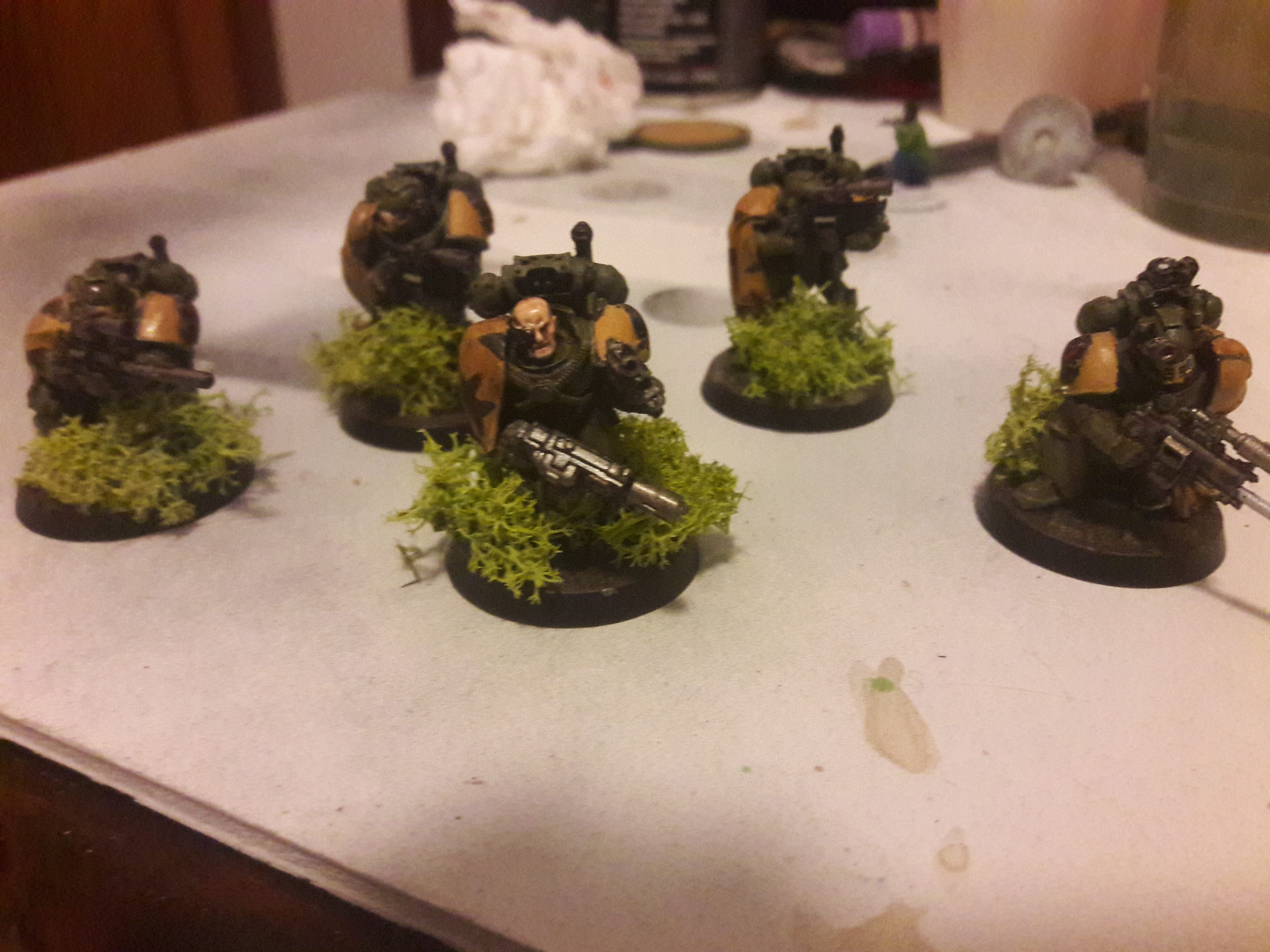 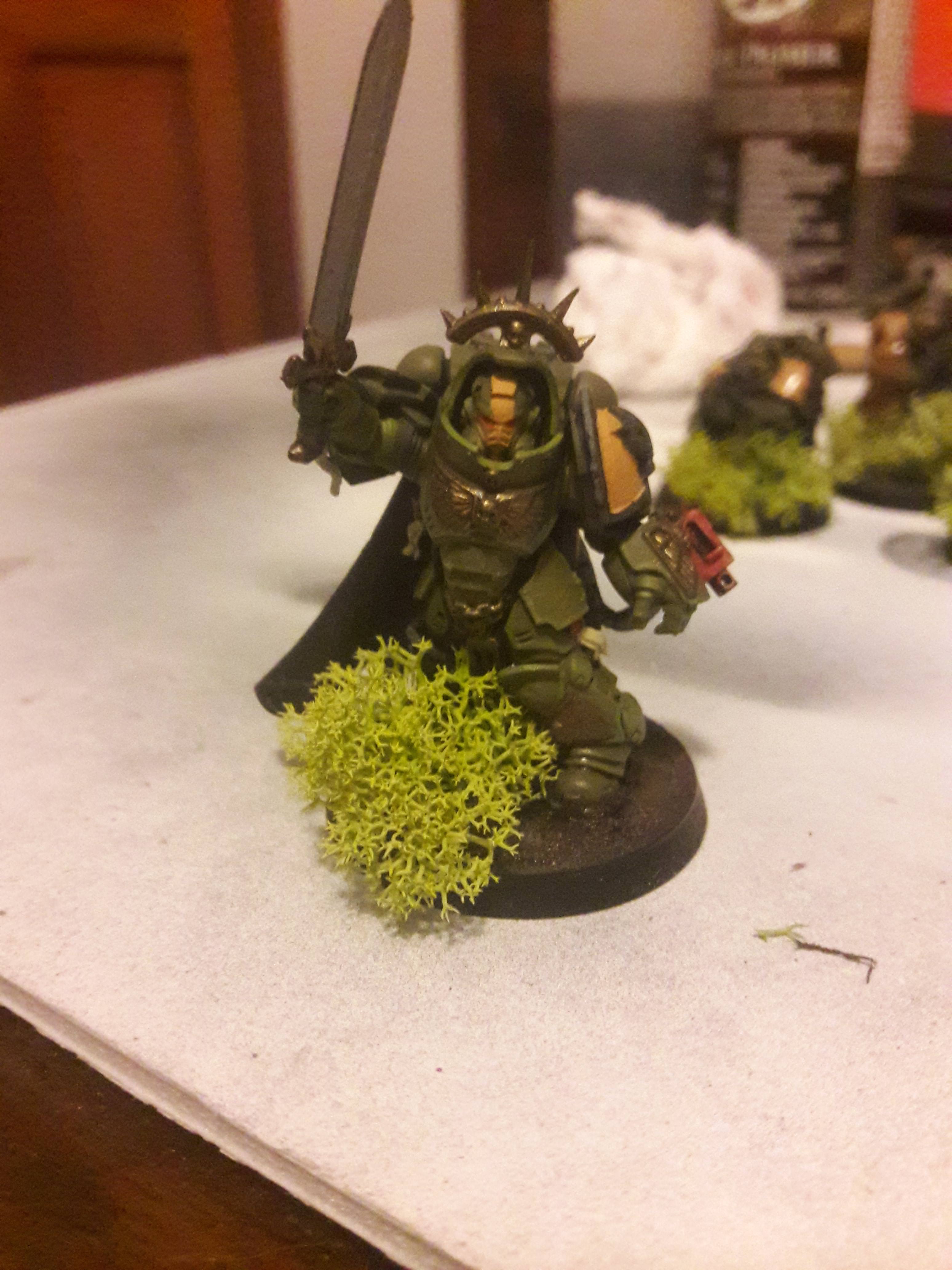 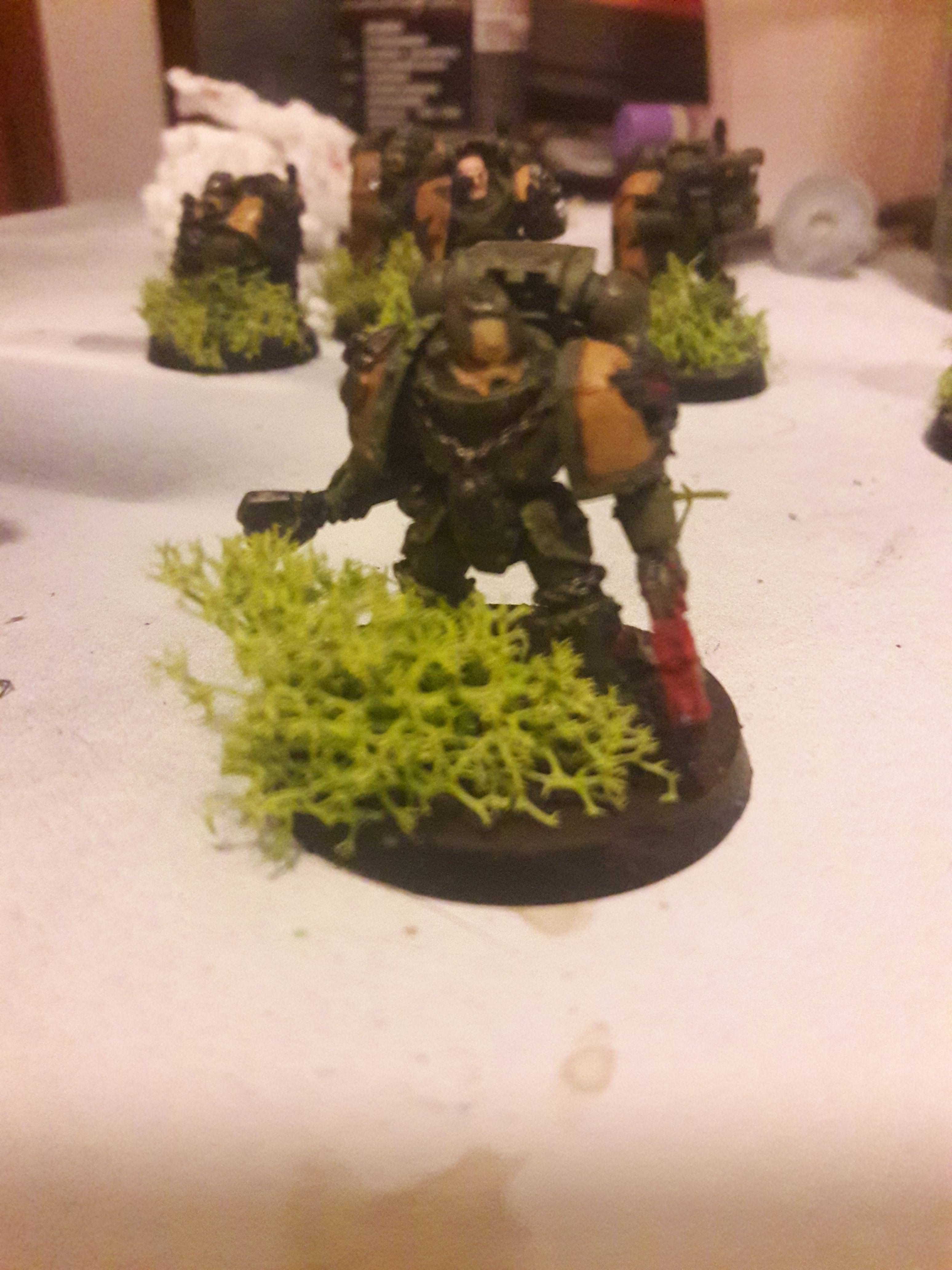 The Predator is one of the FW Deimos models, which I saw as very fitting for the Mantis Warriors.

It's always great to see Mantis Warriors and yours are looking good!

Sorry for the wait on somewhat better pics. 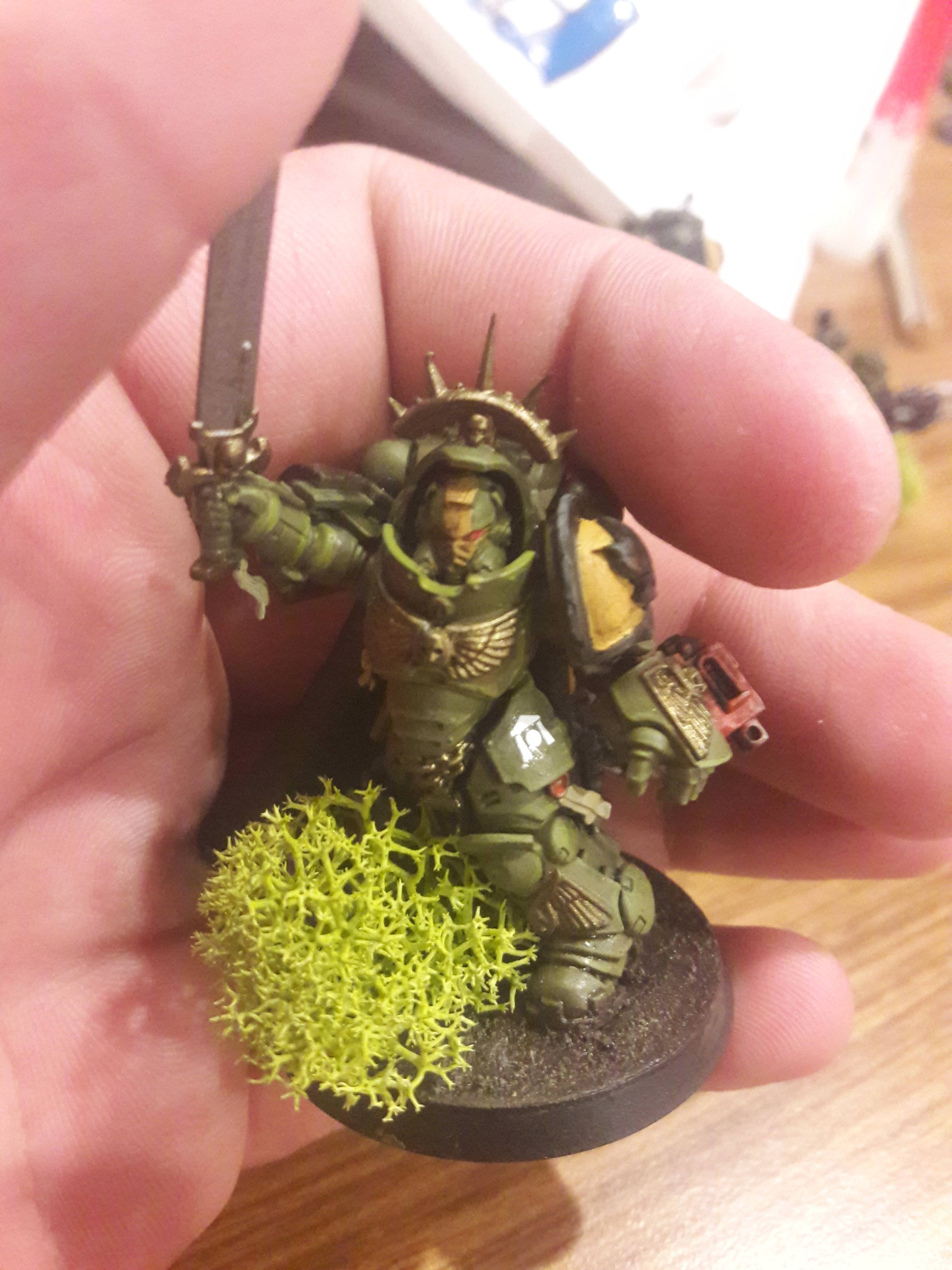 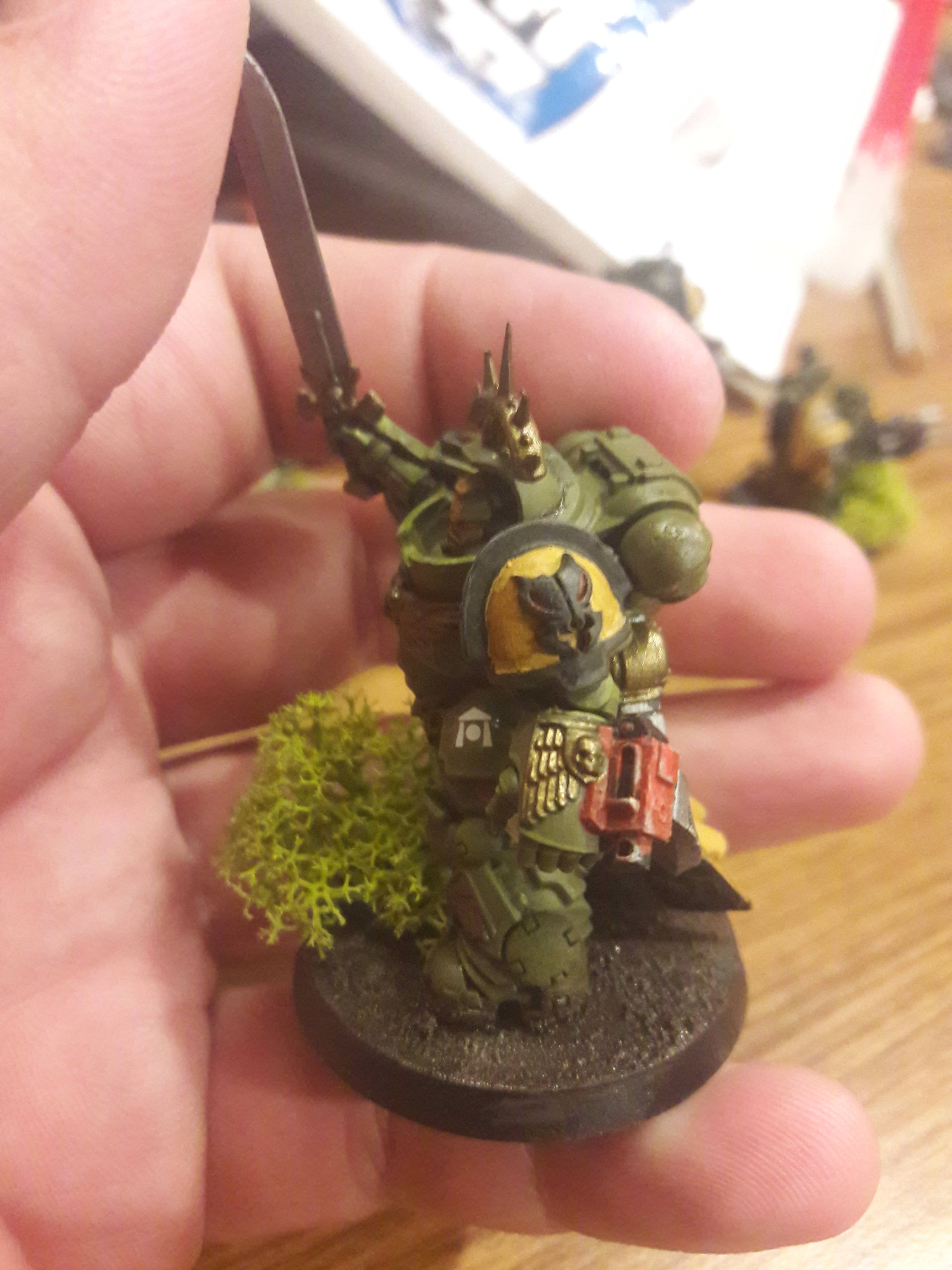 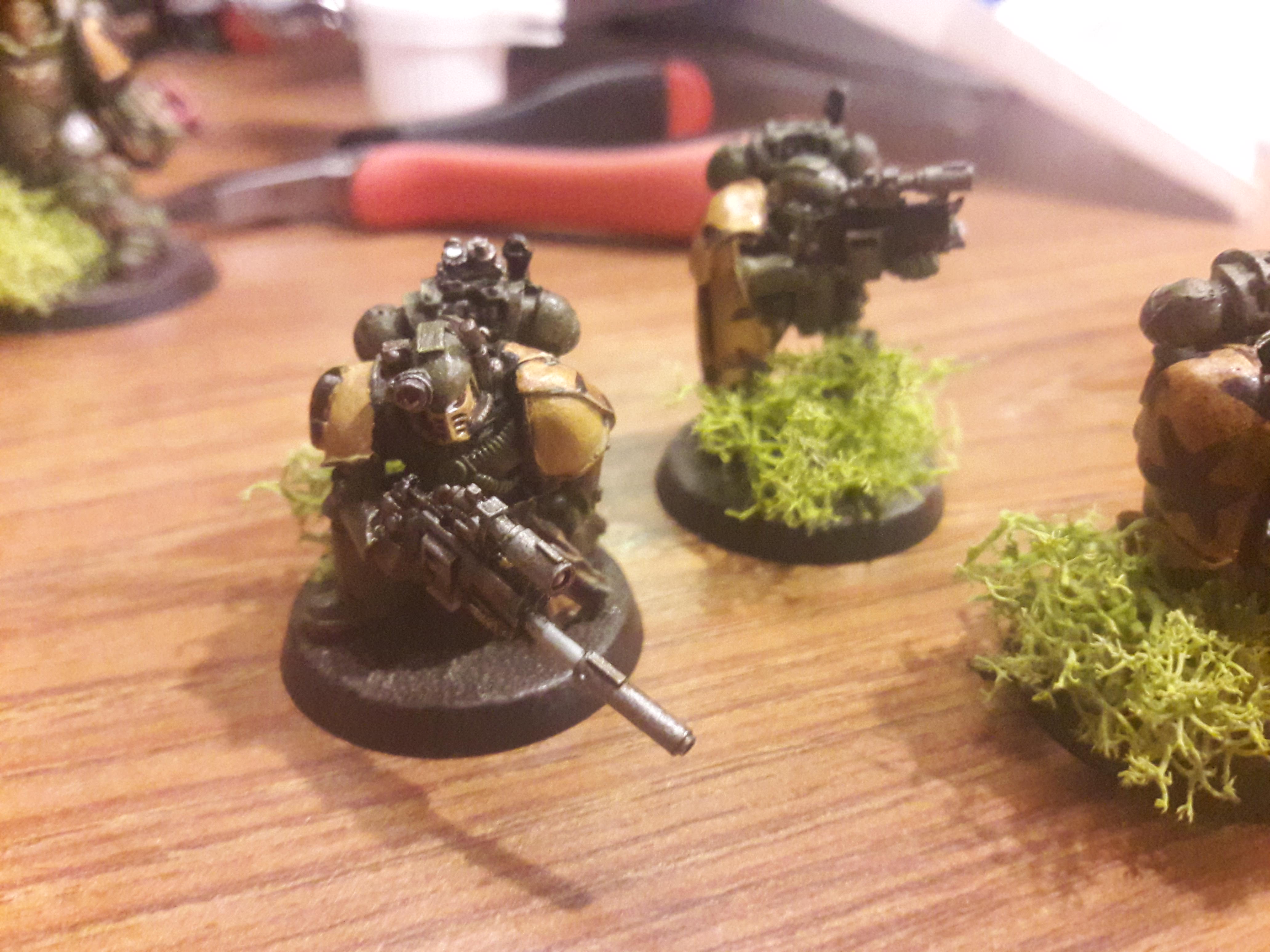 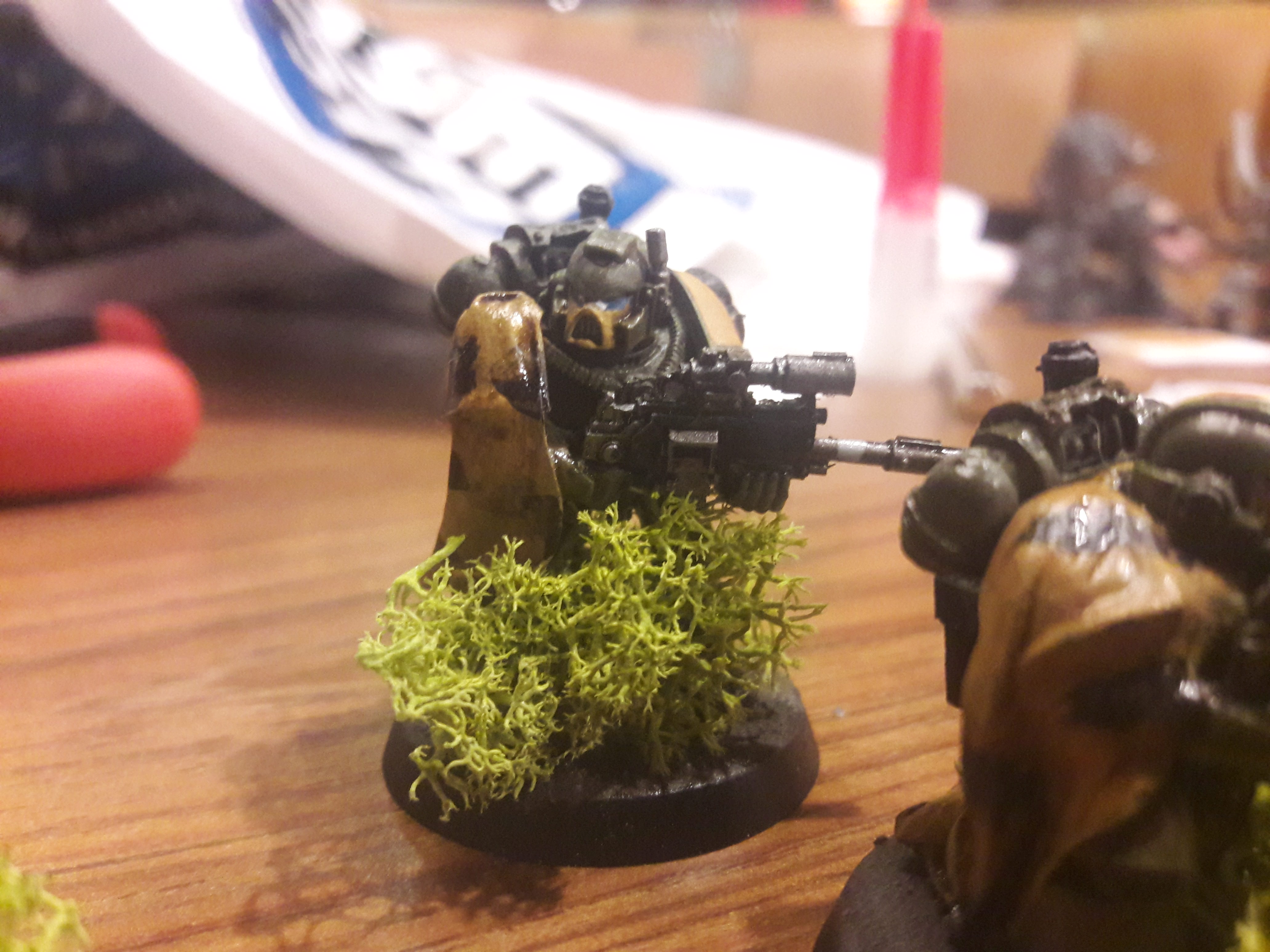 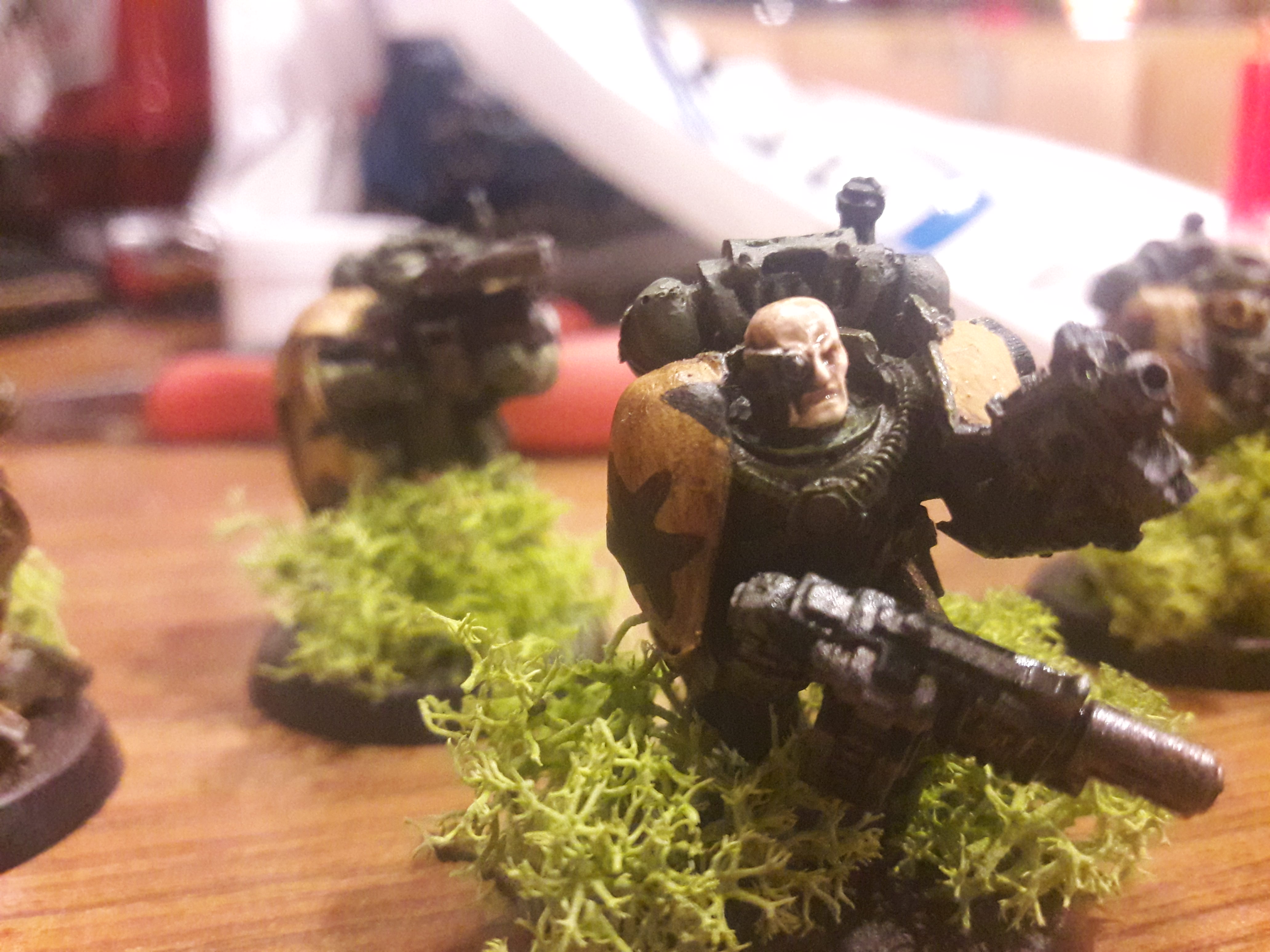 The Sergeant's head sucks, I need to go back and repaint it. Also the gun barrels keep losing paint in my case.

I'm not normally a fan of space marine armour but your tank is great. The commander really makes it and sets the scene.

Thanks for the compliments everyone!

"And now for something completely different"

Leman Russ Exterminator for the Jopall 19th Armored Troop. This may play my hand for my personal fluff for my collection, so look out for that soon. 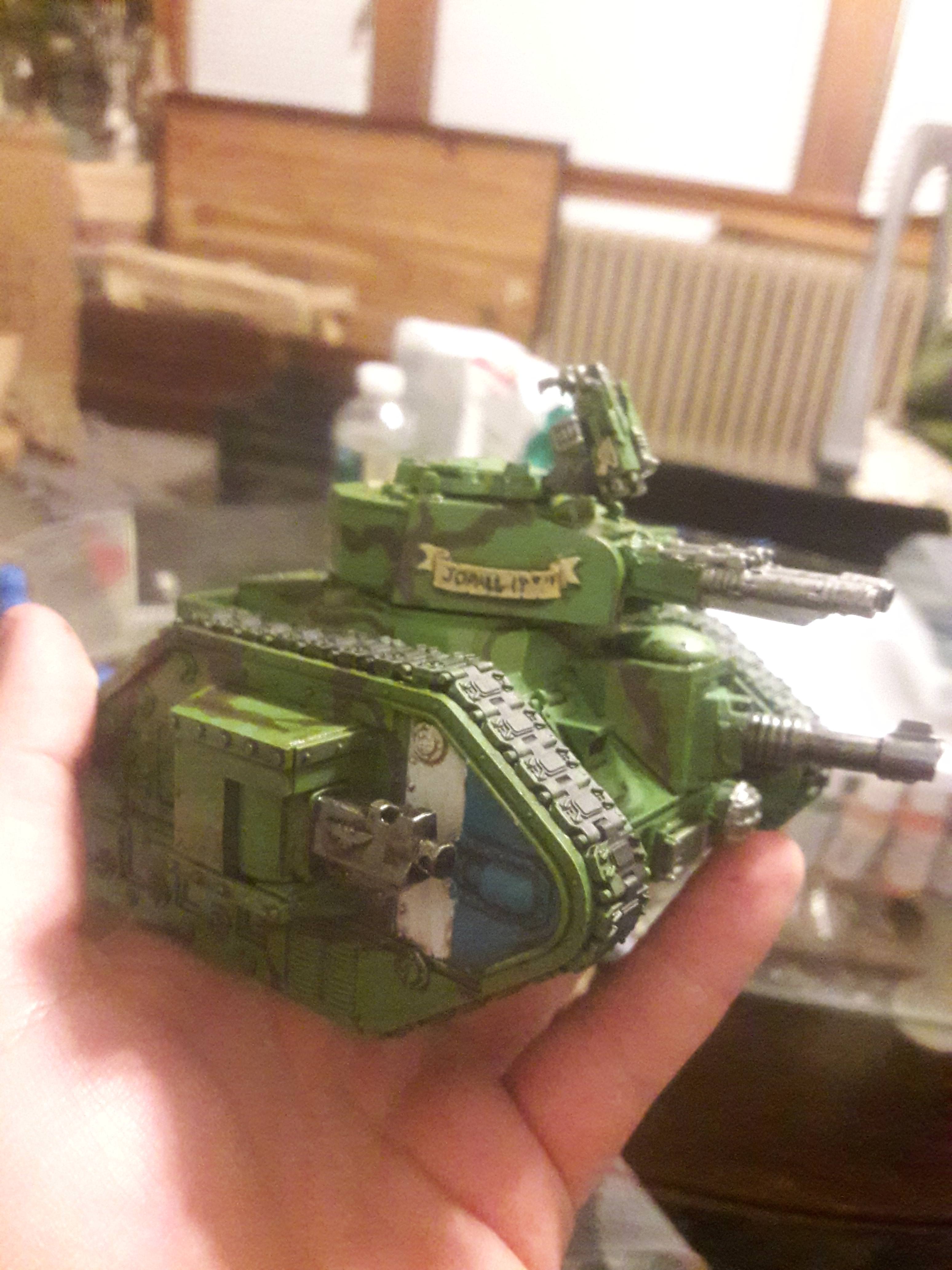 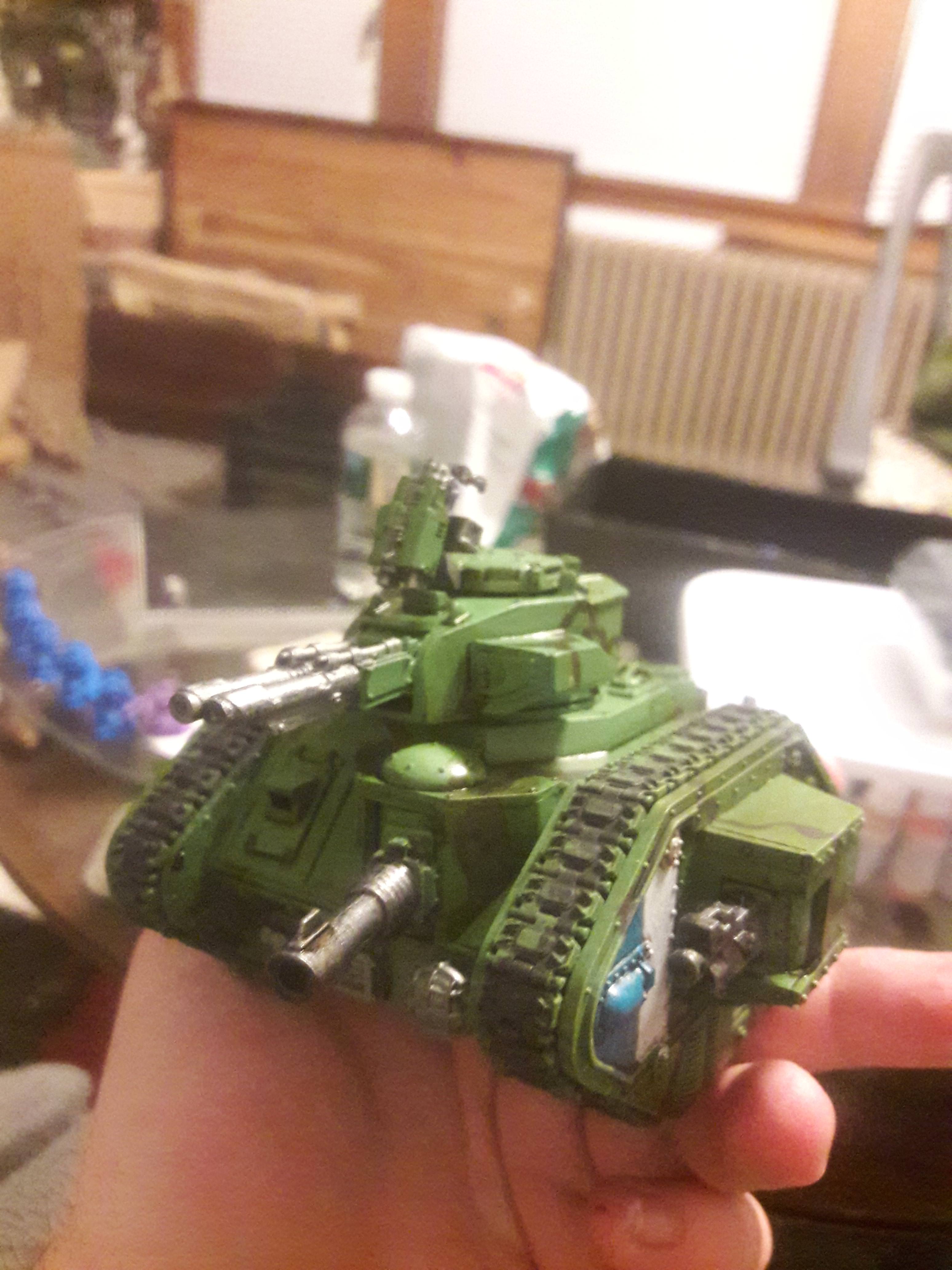 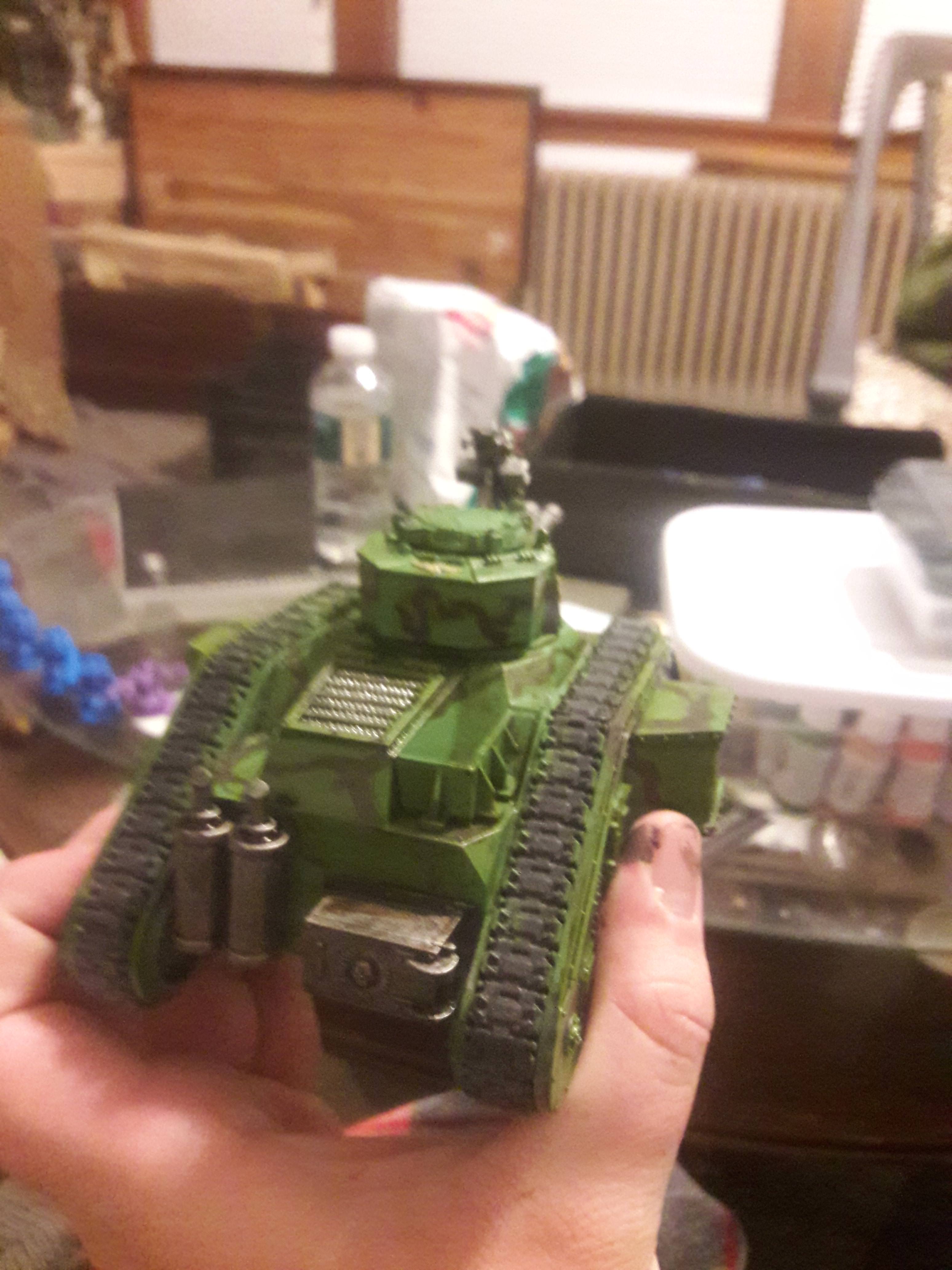 And yes, this is my entry for the Trooping if the Colours event.

And the armor starts to roll out.

So uhhh..... It's been a while. I went through a lot last year, changed jobs, and had to deal with a break up, so I didn't have too much time for hobby stuff, especially considering my ex still has my paints. But! Onwards and Upwards!

I started painting the guard contingent of my army in preparation of a Kill Team campaign starting at my FLGS next week. 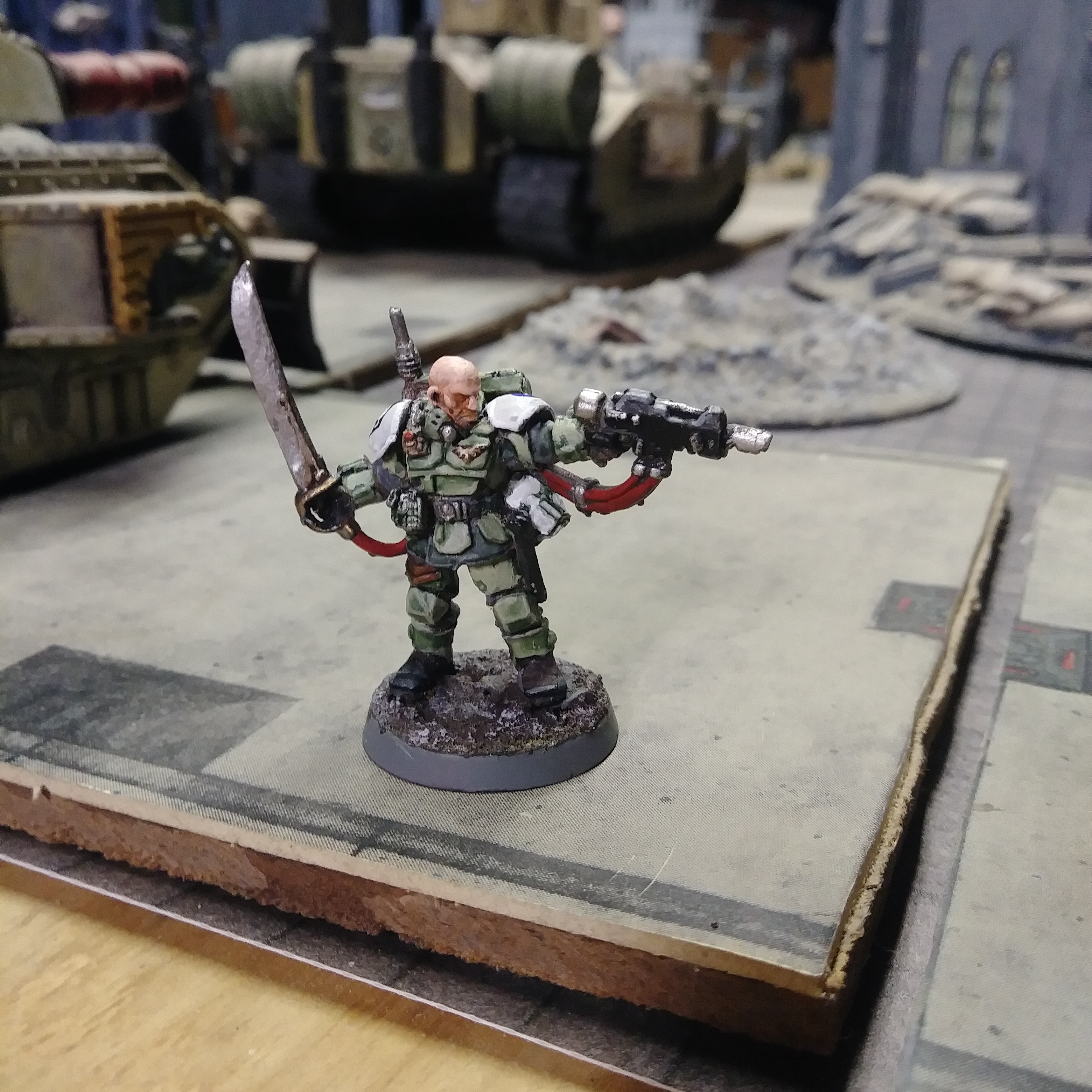 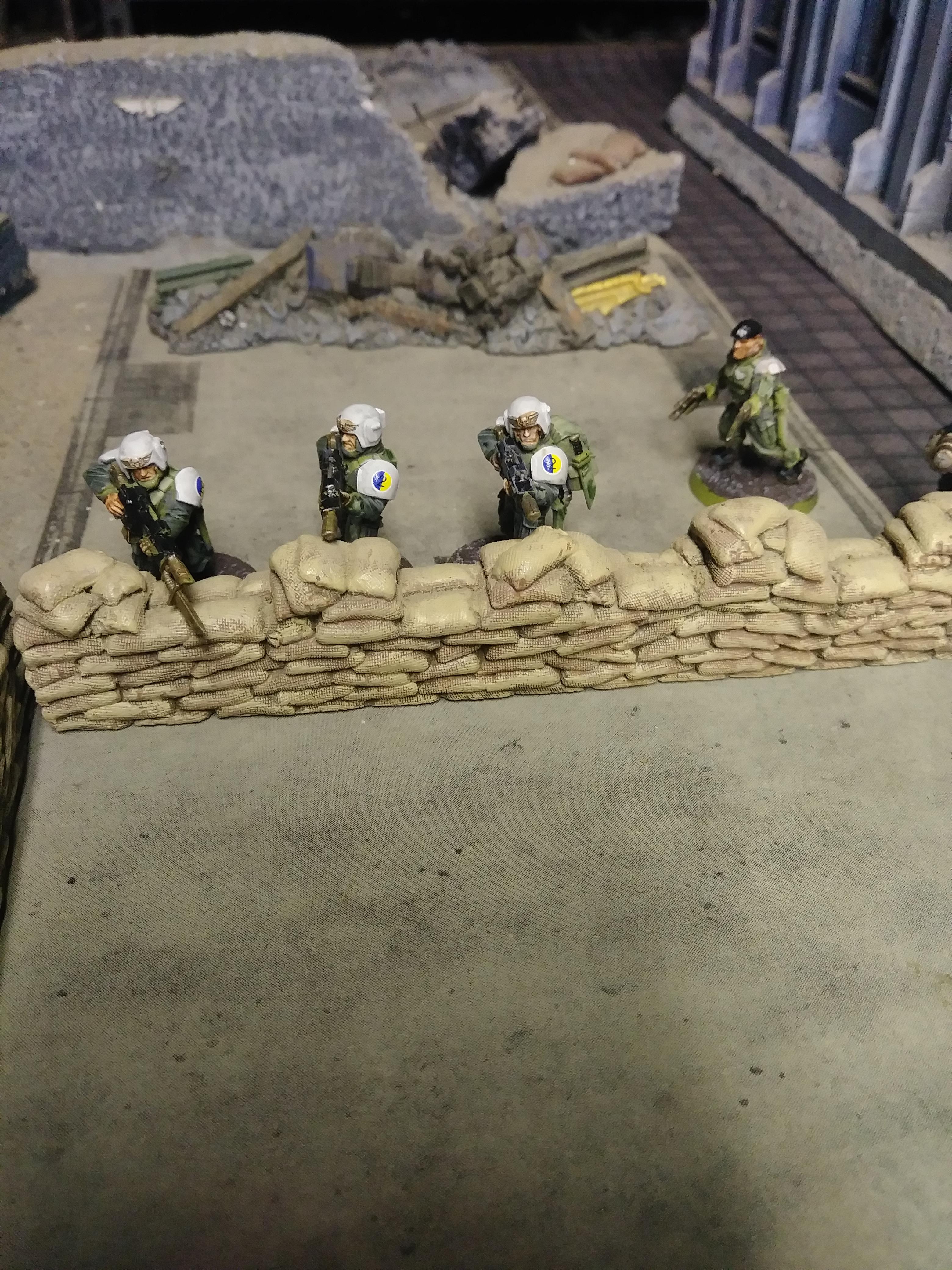 BTW, that lore I promised last year should be on the way this next week as well.

Excellent work on the guardsmen.

Some clean work on those guardsmen, the terrain in the shot is good too.

The flesh is weak but Twinkies are forever...
Burn the Heretic, the witch, the mutant in the name of oooo cake!

Very nice all round, the cadian icon on the hip plate of the Gravis armour is a nice touch.

Thanks for the compliments guys! 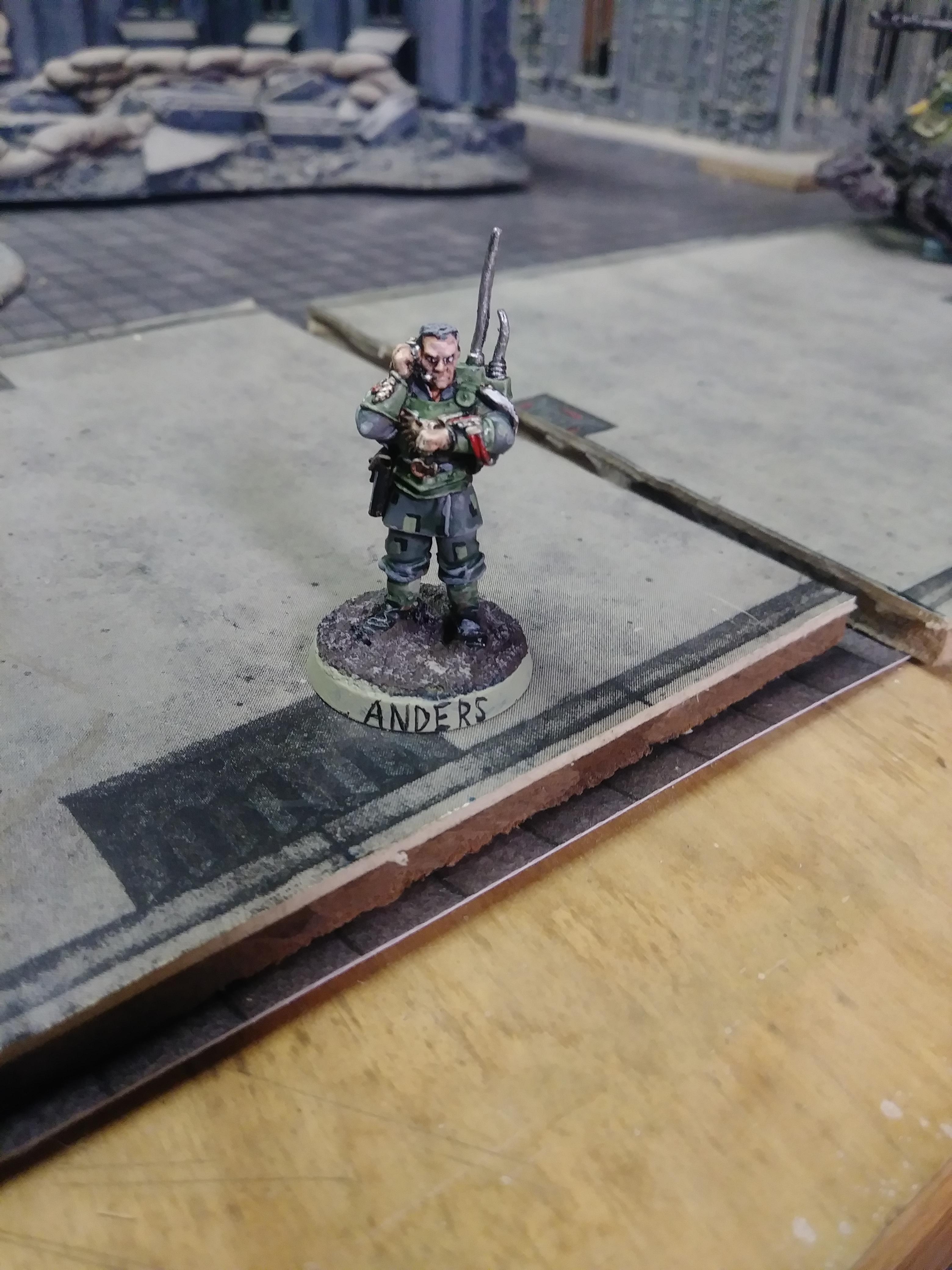 The camo on his uniform is from the 2nd Edition Guard codex, BTW 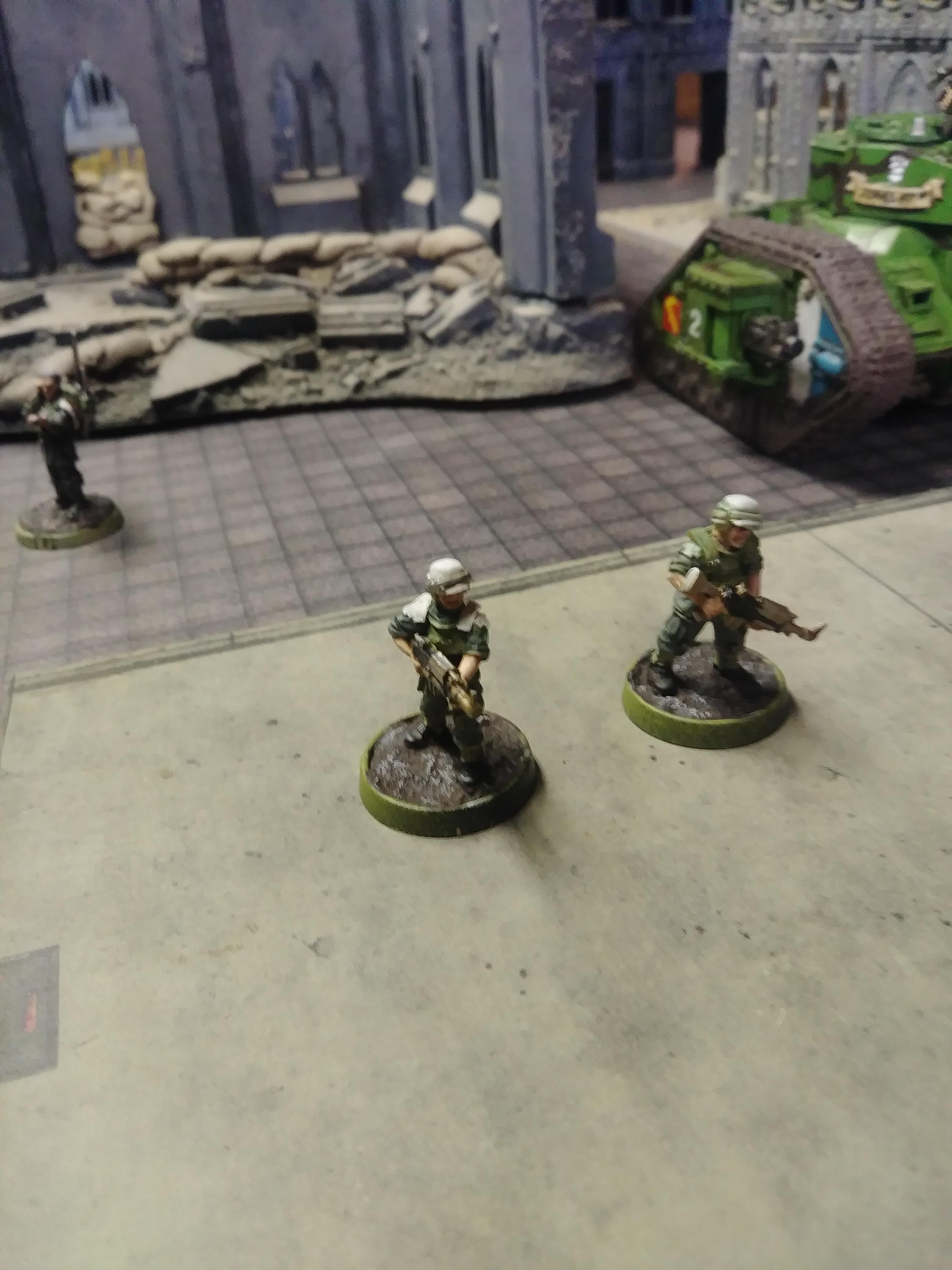 Good job on the new models.

In 999.M41, a contingent of the Red Corsairs, themselves led by Arminius Pax, a former Ultramarine, lead an invasion of the Gellerhorn cluster, a region of space in the "upper" part of the Galaxy (space is 3D, so I figure it's on the edge of the Galaxy whilst being nearby the Maelstrom). The Imperium was preparing to reclaim the cluster, however the opening of the Cicatrix Maledictum delayed the operation. At the conclusion of the Indomitus Crusade the Imperium finally starts the Gellerhorn Crusade. The total of Warmaster is given to Hallam Sexton, an accomplished general from the Noble Houses of Nord Merica on Terra.

Warmaster Sexton divides command of the Crusade across 3 armies. Herein, we shall be discussing the 1st Army.

The honor of leading this force is given to Lord General Drahoslav Mikula Stárek of the Opava 40th Division, a unit mostly consisting of Heavy Infantry from a feral world that is covered in wastelands. The Lord General made a name for himself by leading the 40th through the Plague Wars in Ultramar, rumours even state that he had personally faced a heretic commander in close combat, and slew the traitor flawlessly.

Units under his command are varied, however some of the most unique are the Jopall Indentured Squadrons. Fresh from the battlefields of Vigilus and the Nachmund Gauntlet, Colonel Maksymilian Rutkowski leads the Jopall 20th Indentured (Infantry), and the Jopall 19th Indentured (Armoured).

However, when the Imperium goes to war, it's not only the blessed Imperial Guard on the front. Accompanying the 1st Army is the Mantis Warriors 5th Company, commanded by Captain Quan Phan, a Primaris Marine, and Reclusiarch Kire Pandeu. In addition reports of an Inquistorial force from a lesser Ordo seem to indicate one Inquisitor Soroush Khoroushi, from the Ordo Cursarius is present, as is a Tempestus Scions company closely associated with the Ordo.

The first system of the Gellerhorn cluster to become a battleground of the 1st Army is the Winalagatis System. When Arminius Pax invaded, this was the first system he fought in.

The central star is Hé-no, a white dwarf star first discovered during the Great Crusade by the warriors of the V and XIII Legios. Closest to the star is the refinery world of Gijesa, a vital world in the cluster as it is the prime source of promethium in the area. Tabaldak is an Agri World that provides grain and other foodstuffs for the subsector.

Qamatis is the third planet from the sun, and the "main" populated planet in the system. Qamatis is covered in temperate rain forests (think the Pacific Northwest in the US and Canada), with several major population centers situated through the planet. The planet is also the main source of resistance against the Chaos Occupation Force. During the initial invasion the PDF effectively broke apart, with one third fighting against the traitors. After a protracted land war, and the intervention of the Red Corsairs and the Lost and Damned, the PDF have started a guerilla war. The overall commander of the resistance cells, and therefore, the PDF Commander is Colonel Nanuk Nahuel, formerly a 2nd Lt in the PDF.

After Qamatis, there is the deathworld of Gagqa. Formerly a verdant paradise, after an exceptional planetary defense campaign, in which 5 planetary strike forces were repelled, Arminius Pax used Rad Weaponry to bombard the planet for a full sidereal week.

On the world of Xamatutsi, an ocean world, fleets of wet navy ships constantly battle for supremacy amongst the floating Hive cities.

Finally, Napioa is the prime world for manufacturing arms and armor in the system.

After the liberation of the Winalagatis sector, Lord General Stárek has his eyes set on the Laran and Andarta systems.


And some lore for the Chaos side now.


"The Wheel Has Come Full Circle"

Once a promising Astartes, Arminius is now that which concerns even the most stalwart of battle brothers, one if their own turning their back on the Emperor. Born in 917.M41 to a noble family on Quintarn, Arminius excelled in his training, and was eventually accepted as an aspirant for the Ultramarines. Whilst he excelled in drill and CQB, marksmanship was his weakpoint. After twenty years as a neophyte, Arminius Pax is elevated to a full Astartes. In the ensuing years, he excels as a commander, and is given a squad of the 6th Reserve Company. In 989.M41, whilst the chapter was conducting combat and anti-piracy operations in the Maelstrom zone, Pax Arminius abandons the chapter and joins the Red Corsairs.
In the following eleven years, Pax Arminius forms his own warband, The Unbroken. It shall be noted here that, for some unknown reason, The Unbroken make use of Rad and Phosphex weaponry.

Some key members of The Unbroken

"The Reaver" (Joined 001.M42)
- A true enigma, the warrior know as the Reaver has no known origin. His power armor is a Mish mash of different marks and liveries. It is known that The Reaver is not a practitioner of the Dark Powers.


Key Members of the Chaos Forces