141 replies to this topic

I really prefer your one

After going back into hibernation for a bit while I dabbled in some light heresy, I'm back on my Necrons for a campaign my group is doing. Started working on Warriors yesterday and just picked up a ton of Martian Ironcrust and Ryza Rust for bases. Pics when I finish basing the first squad, also need to find a good high gloss varnish so they retain their luster.

Bases are still drying, but I did say I'd have pics. I'm using the shoulder pads to mark squads - one squad will have left, one right, one both.

I'll try drybrushing these once they dry and then try some varnishes. 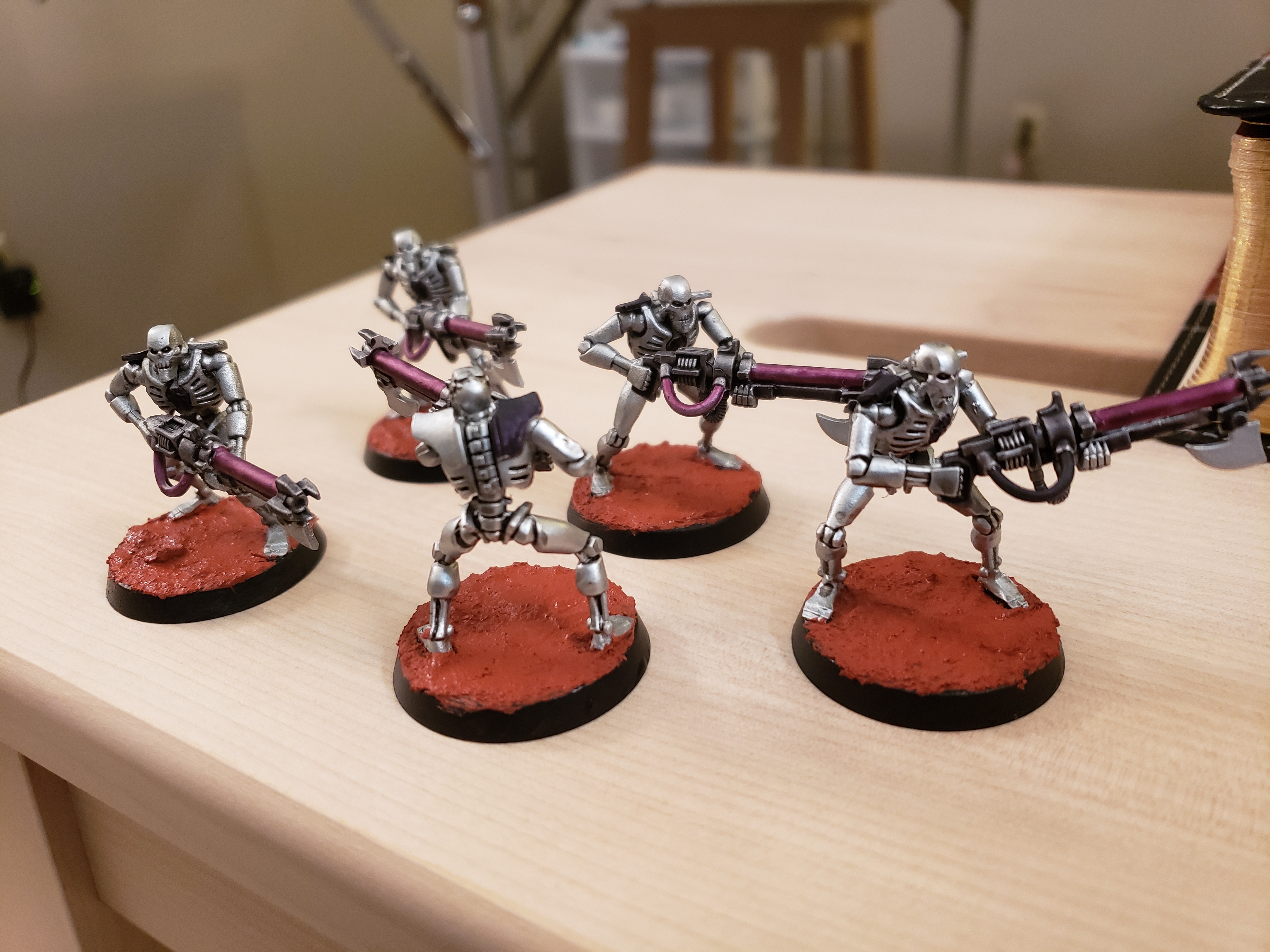 Should have ten done by the time I go to sleep.

You're a skilled painter. Those Necrons look so metallic.

Excellent army so far, the purple was a great choice! Looks great!

Thanks for the kind words, guys!

I've been working on a counts-as Imotekh. I've also been rearranging my Dynasty's hierarchy a bit - I intended to have the Dynasty be a mix of enemies of Rome and cosmic horrors, but I neglected the horror.

So, here is Vodekha Vol-Nagath, First Scythe of the Eternal, the Doomsday Queen. 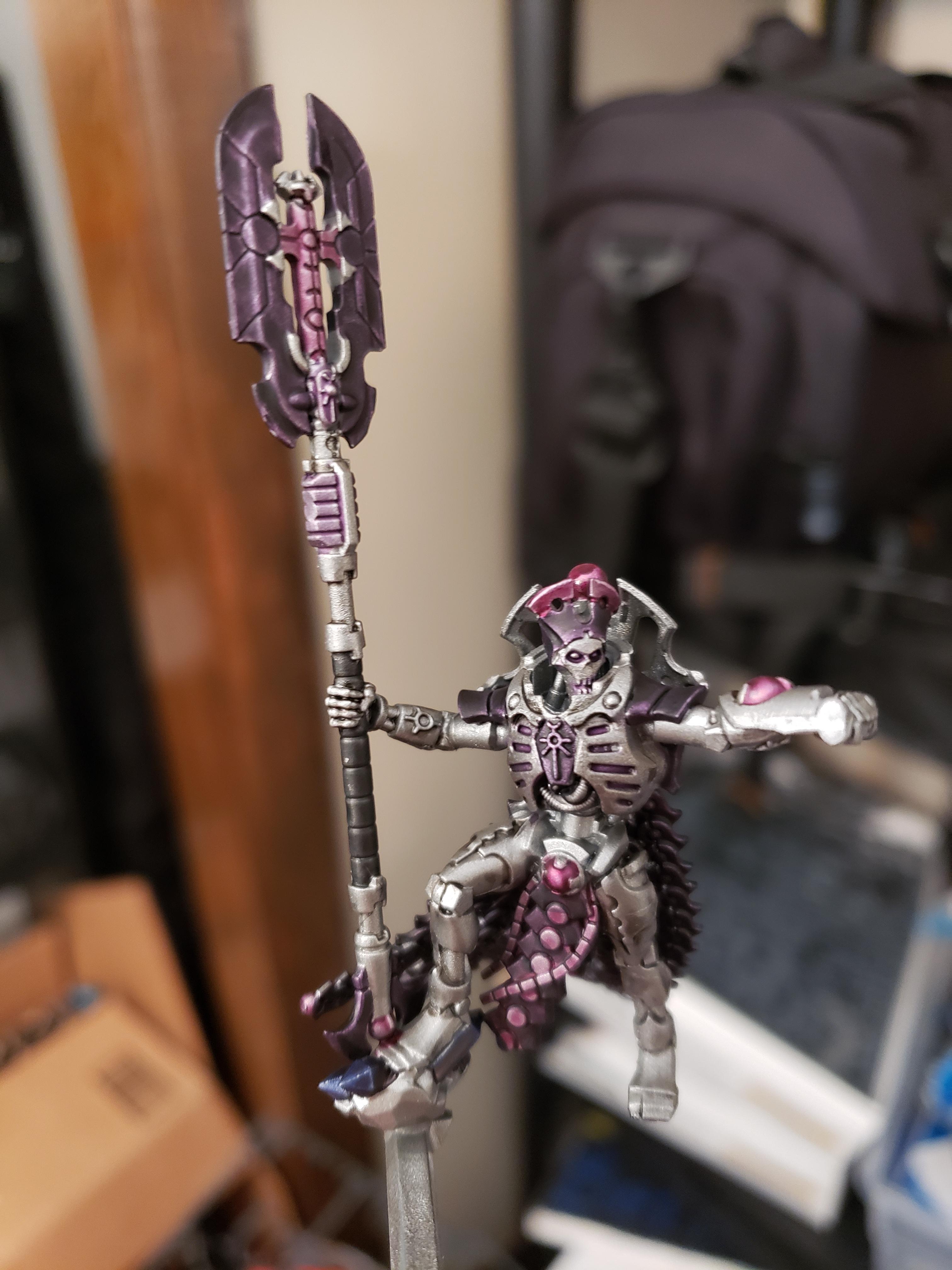 Still WIP but getting close. When her Tomb began to awaken, there was a problem. It only woke a tiny fraction of the Tomb before the city sized engine automating the awakening exploded. It would take months to awaken the rest of the Tomb. Vodekha found herself on a feudal world whose people were mostly overlooked by the Imperium for being worthless. However, the explosion was massive and alerted a neighboring planet something was amiss. They sent troops to investigate.

Vodekha interacted with the natives, inciting them to rise up and fight the Imperial Army now on its way. She told them the men from the sky had no right to steal their resources or their people, and how they could be free from this tyranny. She taught them to fight and how to beat their 'superior' enemy. When the Guard landed, they were assaulted across the continent, unable to defeat the primitives they had so often looked down on. Their camps would be raided, they would find their patrols slaughtered in the dense forests. They tried to pin the savages down and wipe them out, but could never catch them.

Finally, the guerrillas could flee no more, but turned to fight, having winnowed their enemies enough over several long months of fighting to think they had a chance in open battle. Unfortunately, this had just been a ploy to buy time. The Tomb was now ready to rise, and within hours both weary armies were slaughtered to a man.

Now, Vodekha is the highest ranking general in the Dynasty. The Phaeron does not concern himself with ruling, so he leaves things in her capable hands. I did a TON of highlighting on the silver before applying contrast - for some reason it didn't show up well on some parts (the orb on her Gauntlet of Flame doesn't show it at all, not sure why). I decided to try painting her base separately so I can get at everything.

Looks great, the bio was cool too.

Vodekha looks most promising. I like the backstory you wrote for her.

Loving how shiny your army is. You'll have to wear sunglasses when the whole army is out

Will you be doing bios for all your characters? I feel like this is the first you've shared but my memory is....well, less than eidetic.

I have bios for a lot of them, but I don't think I have posted any before. I tend to come up with them, not write it down anywhere and forget the bulk of it so I want to break that trend.

With regards to being shiny, wait till I take some pics of my gloss coated stuff... it might be too shiny. I think I like the effect but I need to see more of it together to decide.

I have been sick the past few days so I didn't get much done until last night. Started painted my third Scythe, did 5 Gauss Immortals and 2 characters. Right now my plan is to try to get all my troops and characters at least painted, then I will start basing everything. This is in part because I haven't enjoyed basing much so I want to put it off but I also haven't found a good brush on matte varnish to protect the bases once they're done so I don't want to risk damaging them too much. 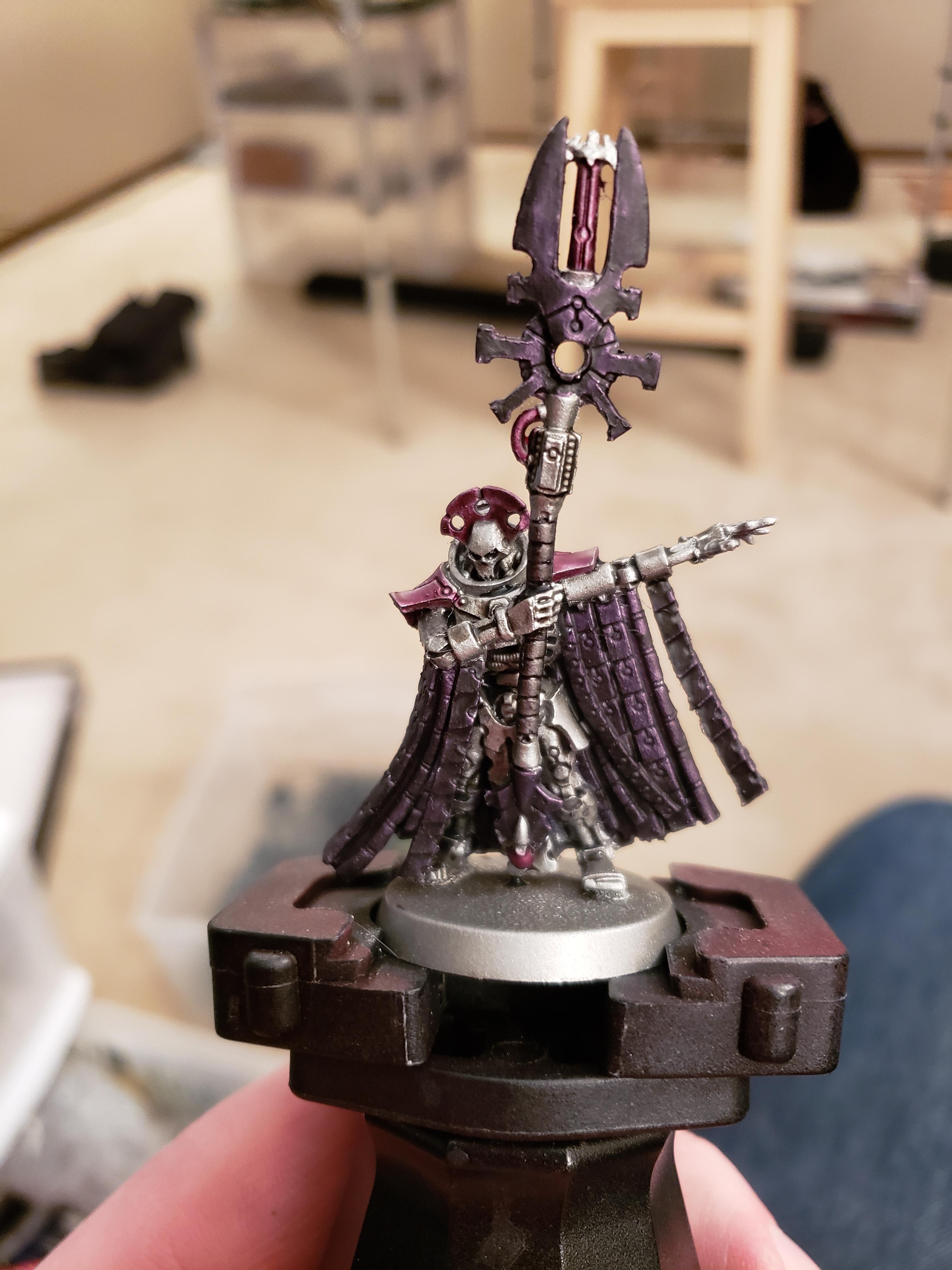 This is Abholos Vaevecton (counts as Zahndrekh). I also painted his sister Ghutanai (Obyron) yesterday but apparently didn't take a pic, I'll upload that later. I have to say, I am not a fan of this model. I can't reach a lot of stuff behind his cloak and staff so he has more silver than he otherwise would. I will gladly chop him up when he gets a plastic update.

Abholos was the youngest of 12 children in his family, and was never taken seriously by his siblings. They would fight brutally amongst themselves, even as children, and it was only their fathers interventions that kept them all alive long enough to go through biotransference. Abholos didn't bother defending himself and so he was seen as too weak to be a threat. His older sister Ghutanai occasionally would intercede for him, but he never had the strength to stand up for himself.

When the Vaevectons awoke from the Great Sleep, their father was dead in his tomb. Civil war broke out between the two strongest siblings, with all but Abholos taking a side. He was such a non threat that he was not sought after by either side, nor was he attacked. He relayed information to both sides and urged them continuously to end the fighting, believing their tomb world would be stronger with all of them working together.

Eventually, with no clear victor, both sides grew weary of the infighting. They agreed to meet at his small fortress, the only territory he had ever held. It sat in a valley underneath a massive mountain. The siblings arrived, escorted by their most unwavering loyal soldiers, but all soldiers not part of the family waited outside - should there be any treachery, no one would escape alive. Abholos gave a speech about strength in unity and learning from the mistakes of the past. However, when he reached his conclusion, he told his siblings that because of their infighting they could not be trusted with the future of their world. The entire location exploded, killing all the family and all their most loyal soldiers waiting outside. The entire valley was buried in a landslide from the mountain, ensuring any survivors would be buried long enough for Abholos to cement his rule and deal with them.

It is uncertain how Abholos and his sister Ghutanai survived - crypteks wonder if they used proxy bodies or transferred their consciousness after the fact. It is also unclear whether Ghutanai was in on the plan or if she merely saw that now was not the time to challenge him. What is clear is that the tomb world rallied entirely behind Abholos and remains unified in their obedience to this day.

These descriptions are excellent.

How are you liking the handle?

I rarely use it on Necrons to be honest. I wish I'd gotten the XL instead.

Not much exciting progress last night, but I did get more done. The Scythe is almost done, just need to do the guns I think. I'll be out of town for a wedding so I'm hoping to finish it up tonight before I leave.

Put some finishing touches on Vodekha and glued her to the base. 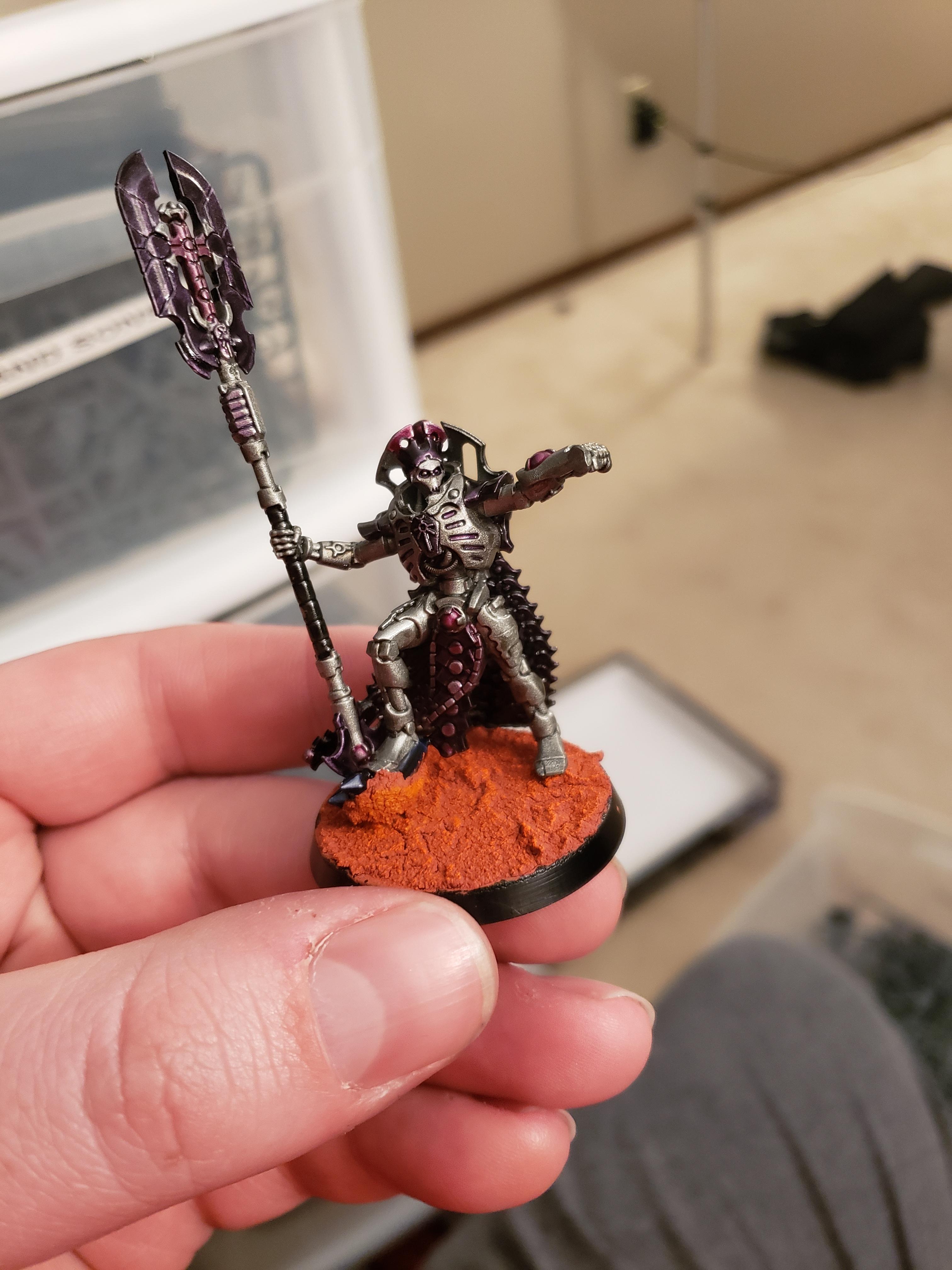 This picture completely lost all the drybrushing on her base for some reason. I really need to get/build a photo booth... 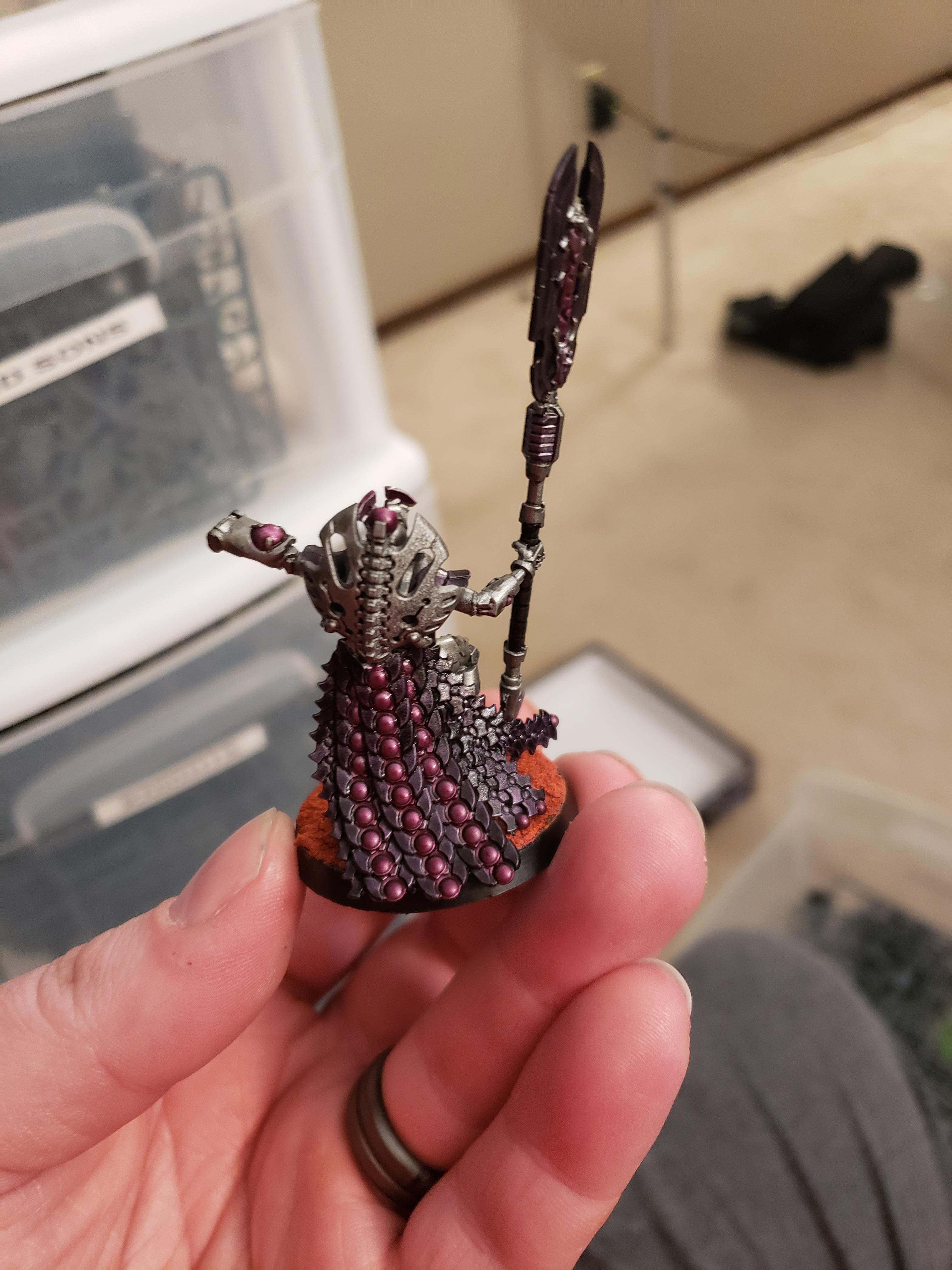 I might paint her spine the lighter purple. It seems like that back plate needs a little more color variety, but I'm undecided. Maybe dark purple will work better since there's that orb on top.

Here's the picture I forgot to take of Ghutanai. 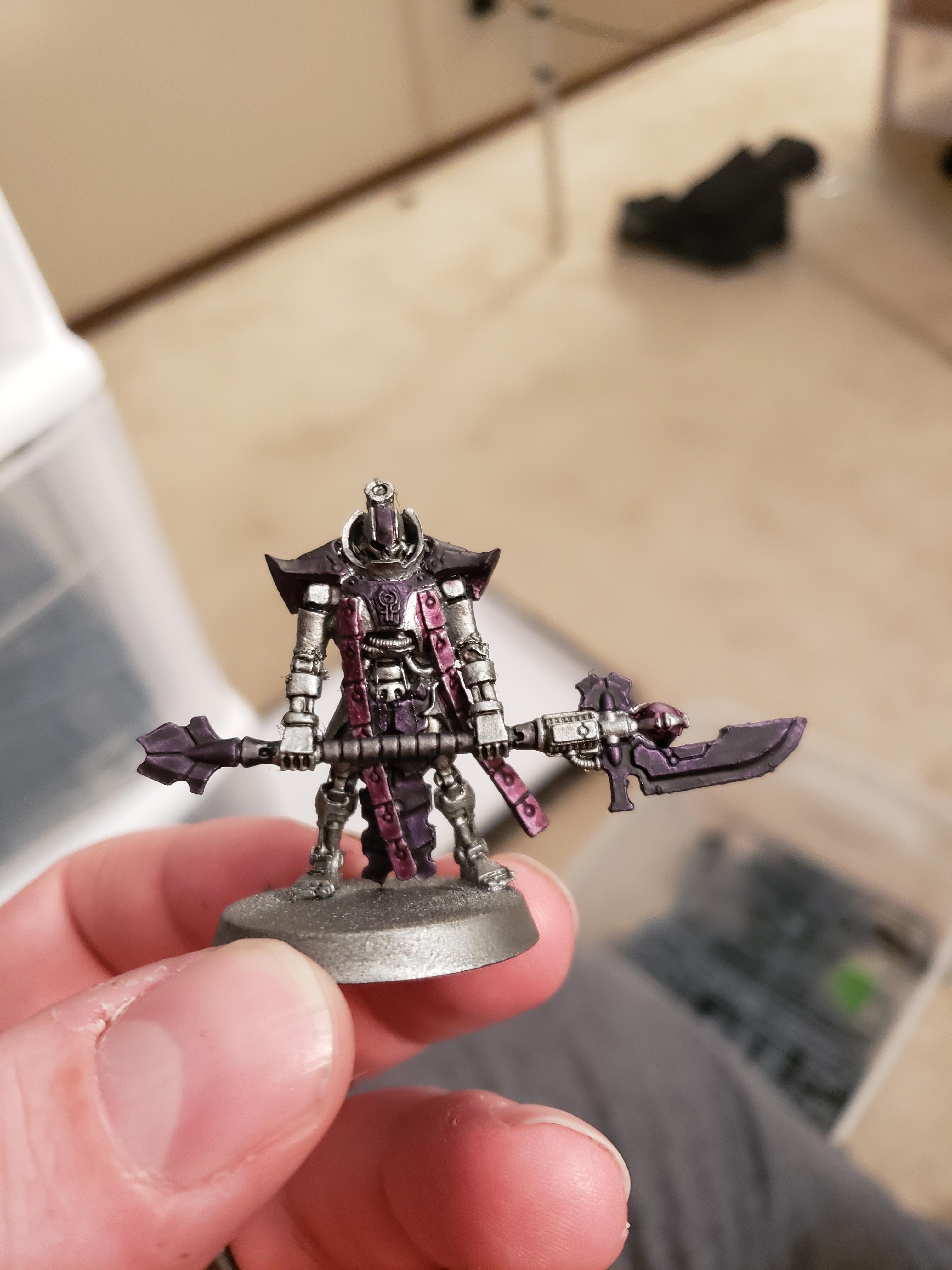 Originally she had a lot more of the light purple to match Abholos (shoulders, head stripe)but without the cloak to darken the model overall she looked too bright so I went over it with the Shyish.

Looks great, love the  blade of the weapon the most!

Also tagged with one or more of these keywords: Necron, homebrew, wip, Seraptek