22 replies to this topic

Hey, decided to get into Primaris models and figured I would do a new chapter. Always liked the greek theme so decided to go with the Minotaur chapter. Here is a test model I finished today. 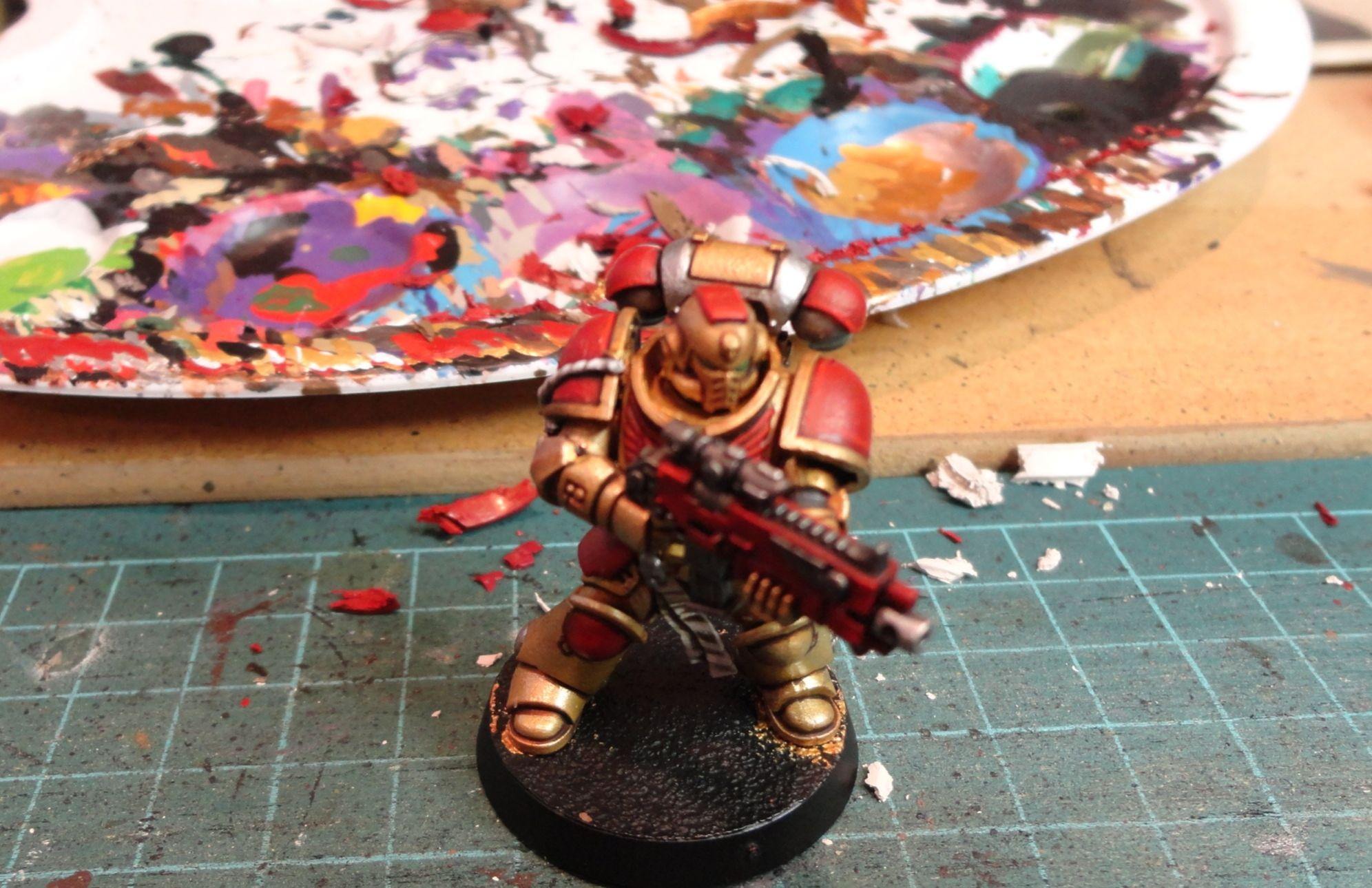 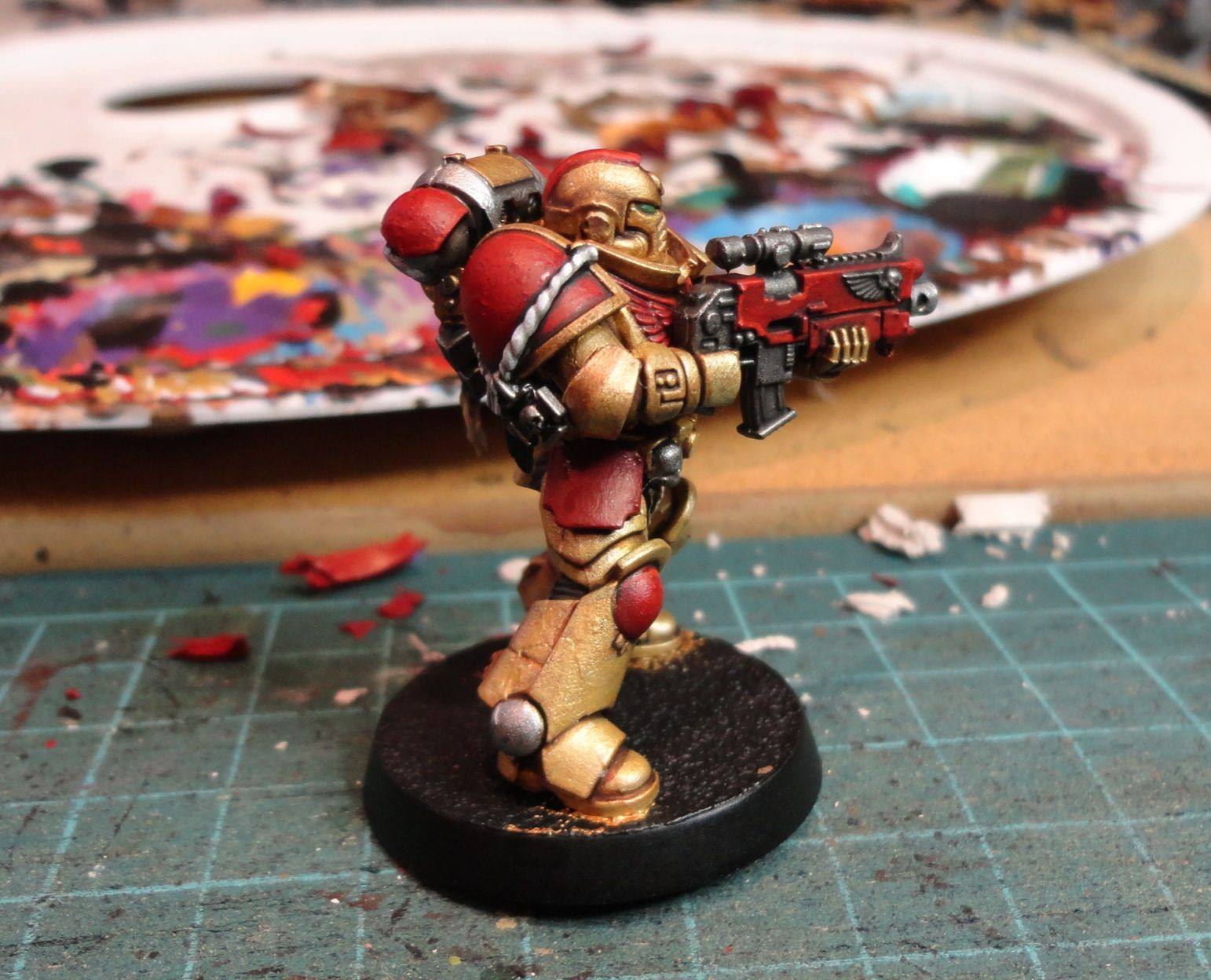 The colors and assembly are well done.

Loving the colour scheme. The only thing i would possibly change is the imperium crest and go for a different colour to break up the gold/red a bit. Maybe try a white or silver?

You could give the metal parts some turquoise verdigris effect to break up all this metal.

Sagentus, I might do the next model with a silver imperium crest to see how it looks. It would tie in with the silver on the backpack.

Chickenleg, Not sold on the verdigris idea. When I was looking at gold or bronze colour schemes I didn't prefer the ones that had the verdigris effect. I am thinking of doing a muddy base, so could add in some weathering effects to the model.

I like it! Nice and clean, good strong red.  The muddy bases are a good idea.

Maybe just a touch too much red on him though, starting to not make it obvious he's a member of the powerful Minotaur chapter.

I think the thigh plates, helm crest and backpack vents could do with being in gold (maybe change up the helm for characters) just to make him a little less busy. Chest eagle in silver as Ryld said too would be great with this.

I have a pic of the plates done in gold. I do prefer the red. The helm crest will only be on characters, even then I am not 100% sold on it. 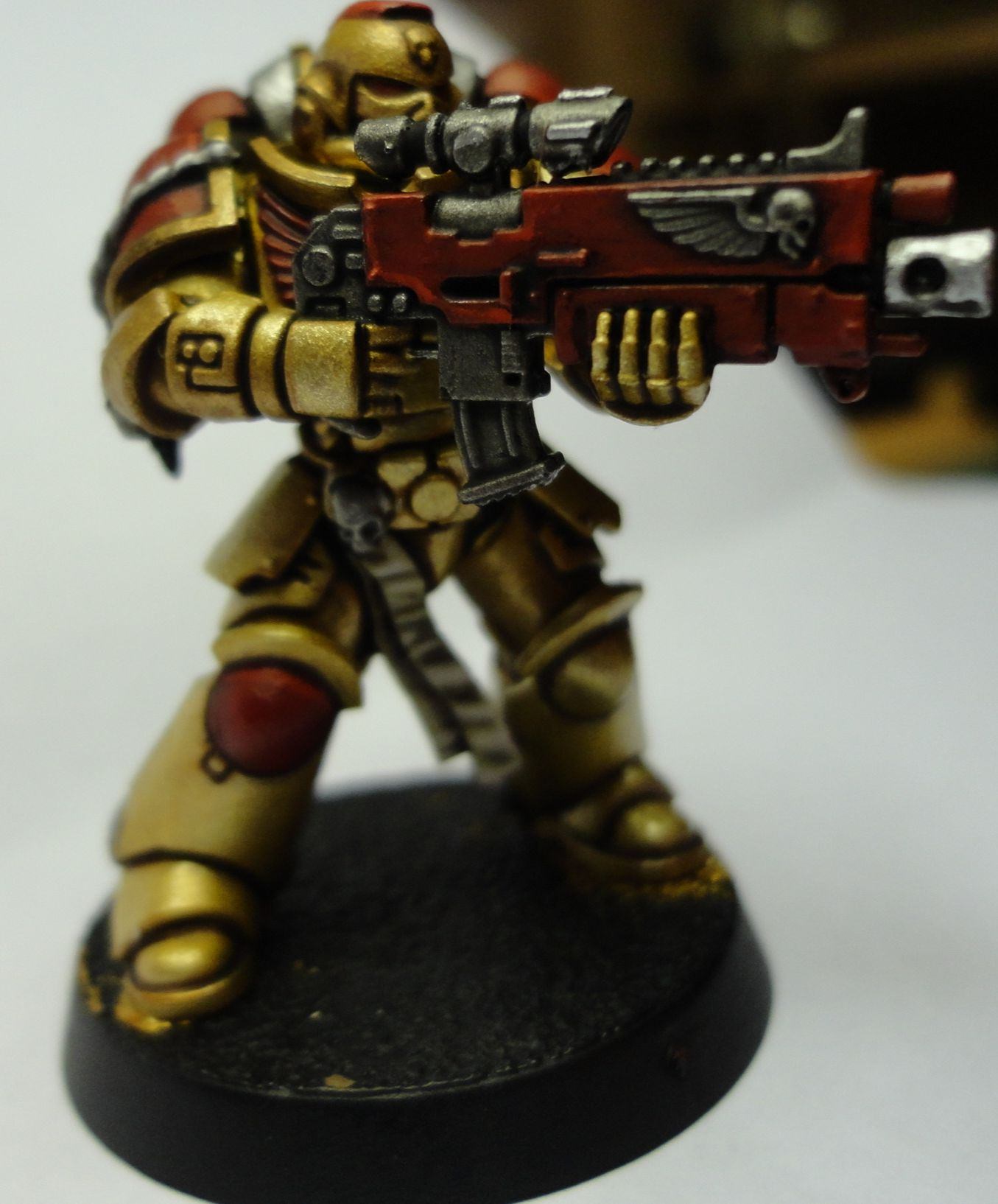 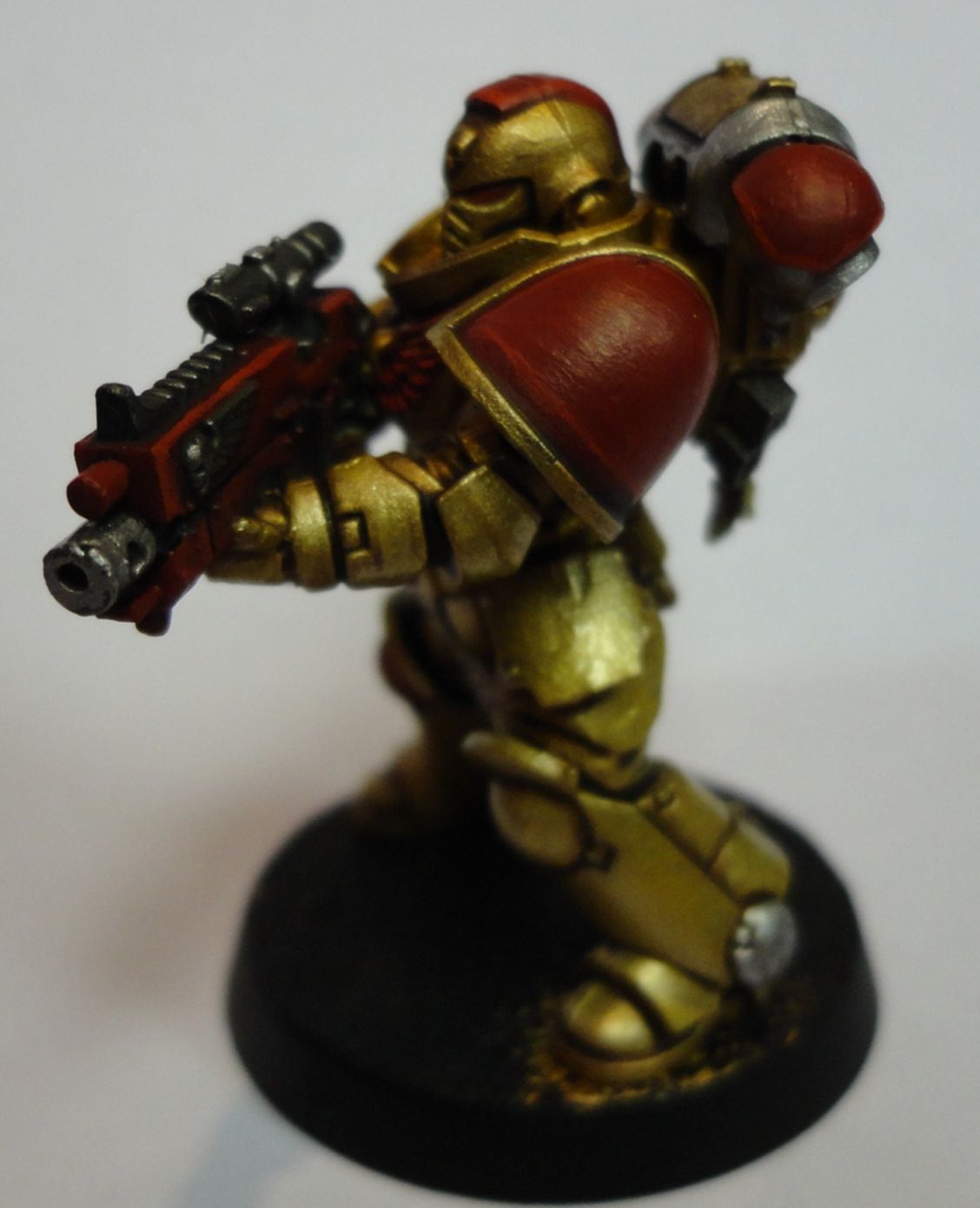 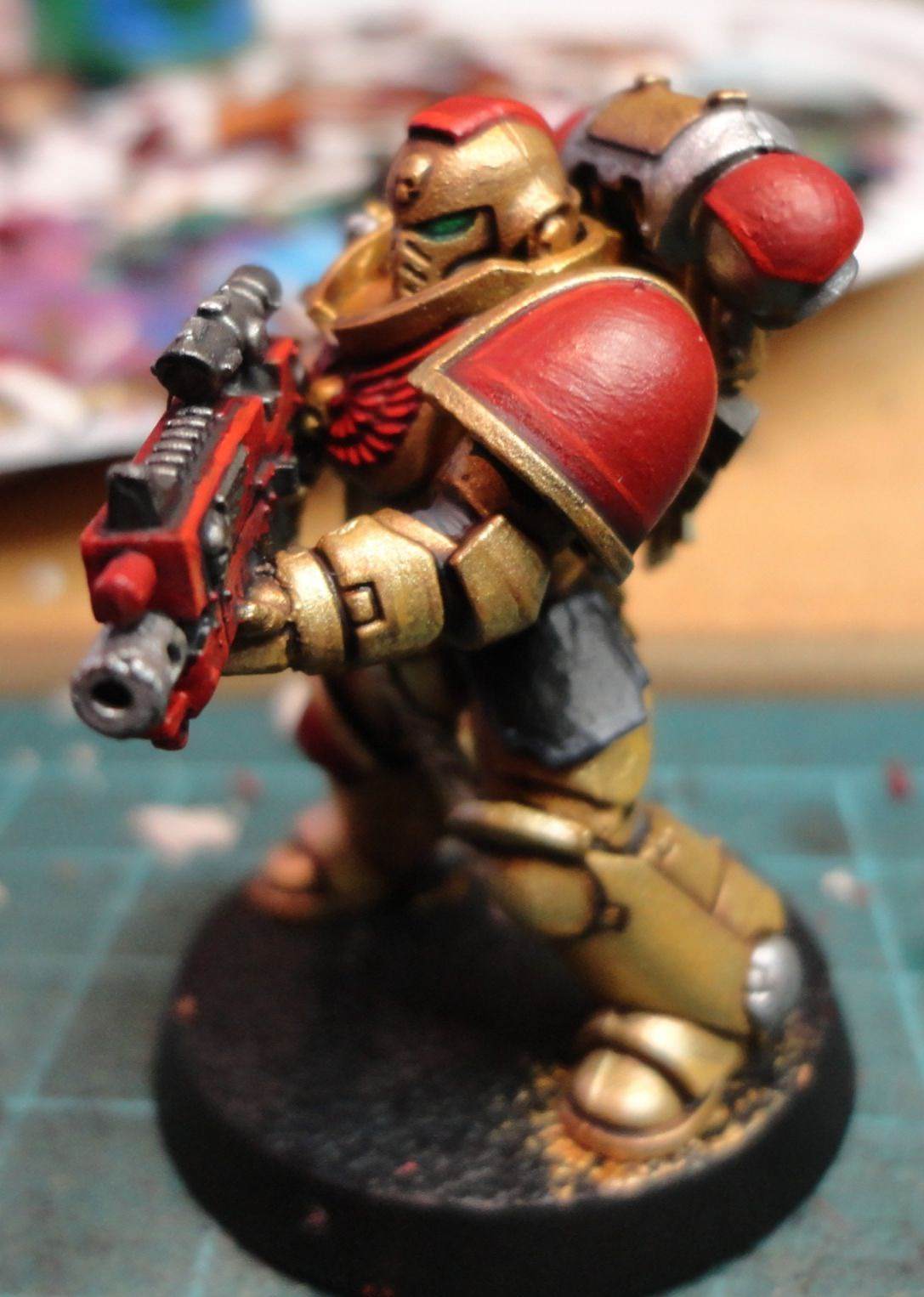 But really appreciate the comments you guys have written. I'll start working on the first of my Intercessors shortly and do the chest icon in silver. For this guy I will paint his vents gold and see what it look like.

the green eyes look much better than the red mate. id suggest the chest eagle in black maybe?

Nice to see the Minotaurs done as Primaris!  I like both the Red or Gold plates - maybe a mix of each on different characters?

"We have no room for hope. We plan and we act. Hope is for dreamers and poets. We have our will and our weapons, and we shall dictate our own fate."

— Lord Corax, Primarch of the Legio Astartes Raven Guard.
My Instagram - More of my 30K work, along with other random things can be found here.

Yeah, could do sergeants with red plates, and maybe other higher ranking marines. I've painted the red crest gold and it looks better me thinks. Also changed one of the silver backpack vents to gold for a comparison shot. Pics tomorrow when I get home.

Crest done in gold. Much better I think. 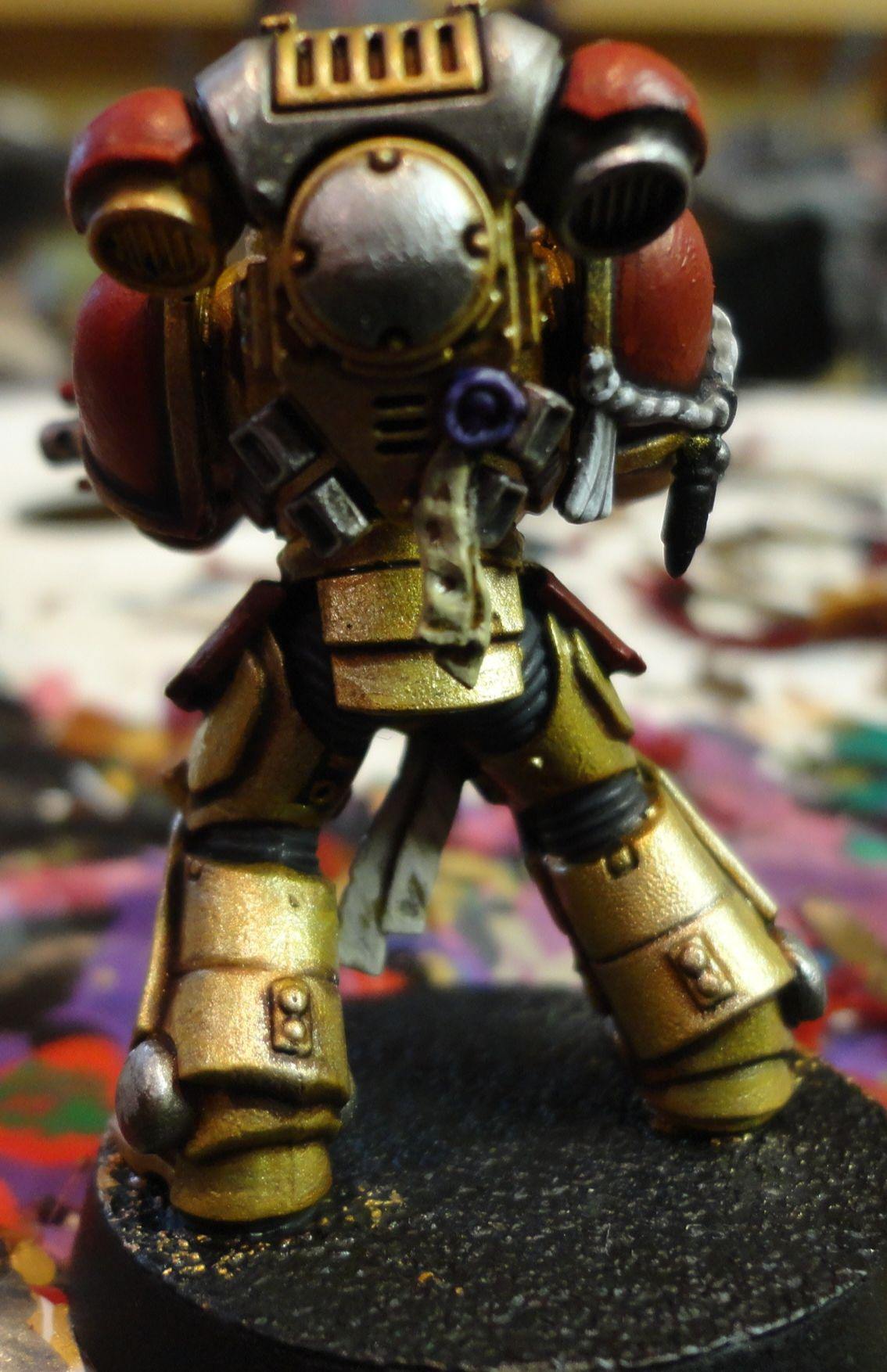 One silver vent, one gold. Just realised I didn't wash inside of the vent.

Thoughts on the changes?

The Minotaur still looks good, but you need to let us know his rank and which Company he serves in, and give us time to study files on Astartes insignia, before we can say whether or not the colors you gave him are appropriate.

Just looking for C&C on the chosen colours at the moment Bjorn. Not too worried about getting all the appropriate colours correct.

I'll bring it down next Friday bro and you will be amazed how good it looks.

I actually can't imagine it being any better than red. I'll paint the next one white or silver and have a look at them both side by side. No promises though.....

I really like the tones you've achieved for those colours; they definitely complement each other well.

One thing I've seen that I quite like is painting the chestplate that the aquila sits on a different colour. These are the Iron Ravens painted by Paul Norton, a member of the GW Army Painter team:

You can see that he uses more blue on higher-ranking characters; while regular troops and their Sergeants have silver chests and thigh plates, the Ancient has blue arms, the Lieutenant also has blue upper chestplate and thigh plates, and the Captain has additional blue plates on his torso.

Aside from the use of colour to denote rank like that, Mk X armour has a lot of opportunities for that sort of colour choice; you could try painting the upper chestplate red, with either a gold aquila or another colour (since some chapter use aquila colour to denote company).

You mentioned you're not sold on the helm crest in red; since Mk X helmets are so similar to Mk IV, you could try painting the faceplate in a different colour, like the 'Eavy Metal scheme for the Betrayal at Calth Dark Apostle: 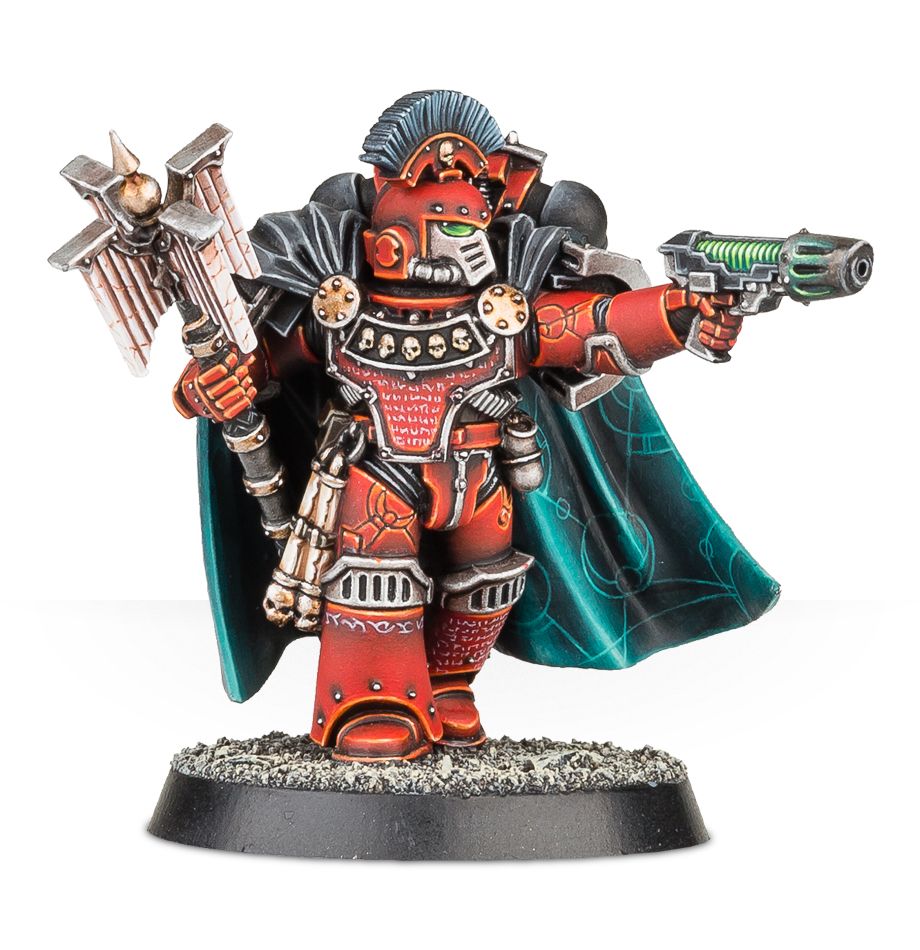 Thanks Ascanius, you have given me something to mull over. I like how Paul has kept that uniform look but has a really varied scheme.

No worries! I really like it myself, obviously, and I'm also stealing his recipe for that silver - it's just Leadbelcher washed with a 1:1 mix of Nuln Oil and Nuln Oil Gloss.

In between working on some daemons, I have been giving this model a bit of paint. 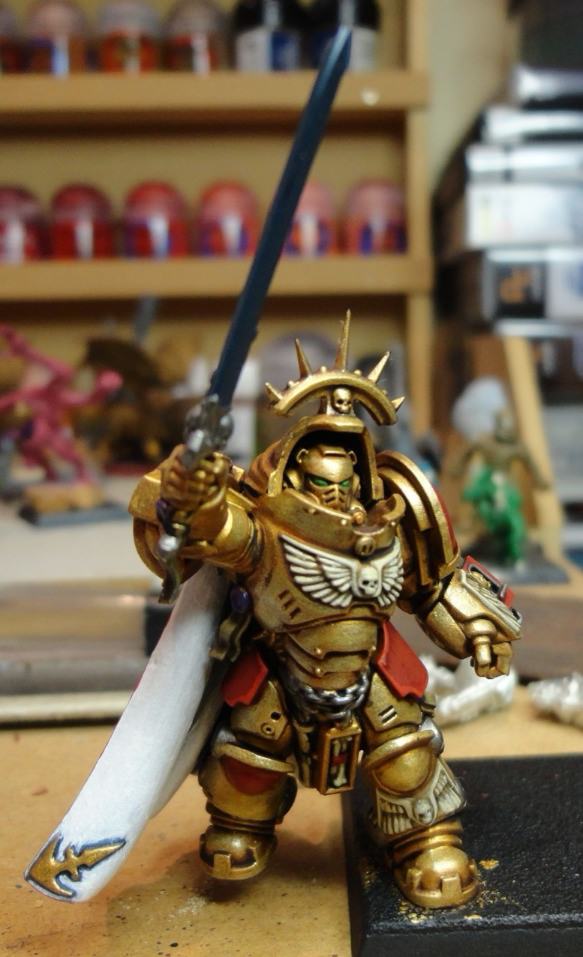 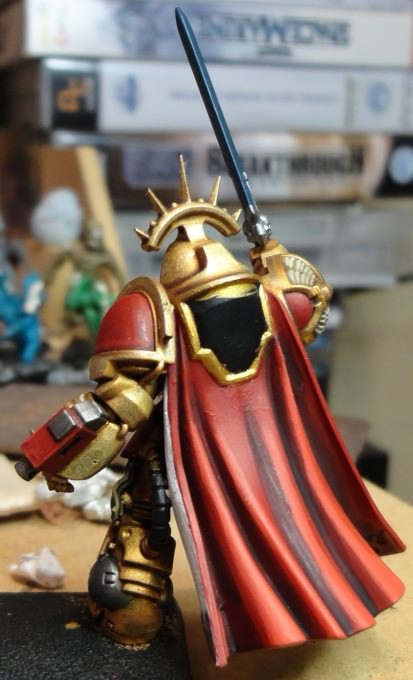 His cloak needs a bit of tidy up, where the white meets the red, and the dark red areas on the cape need tidying up. Other than that I'm happy with his progress.