448 replies to this topic

So since I've mentioned them so much, and because my enthusiasm to work on them is at all all time high, thought I might as well blog that progress.

So first up, two as yet unnamed knights - A Styrix and a Maegera. 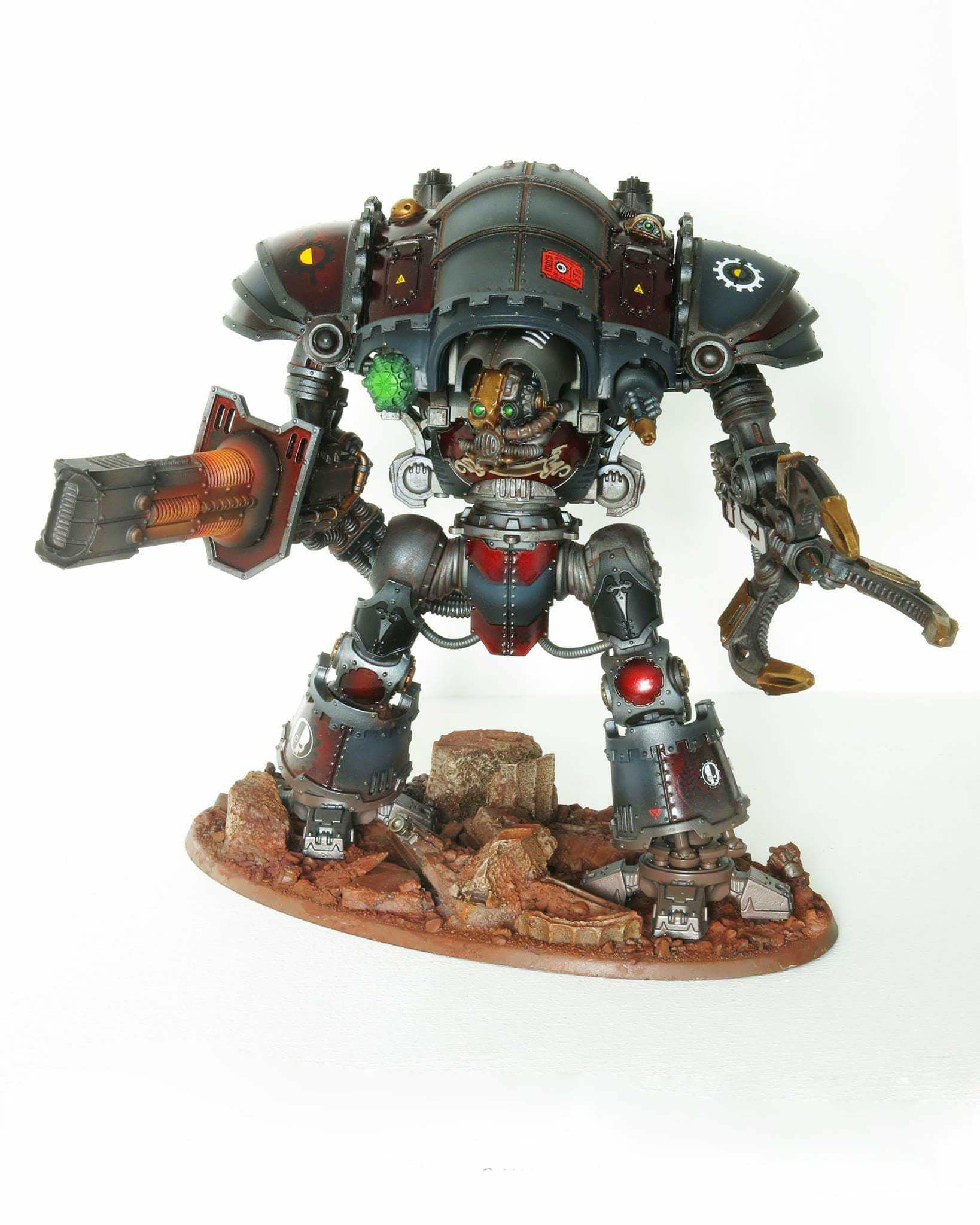 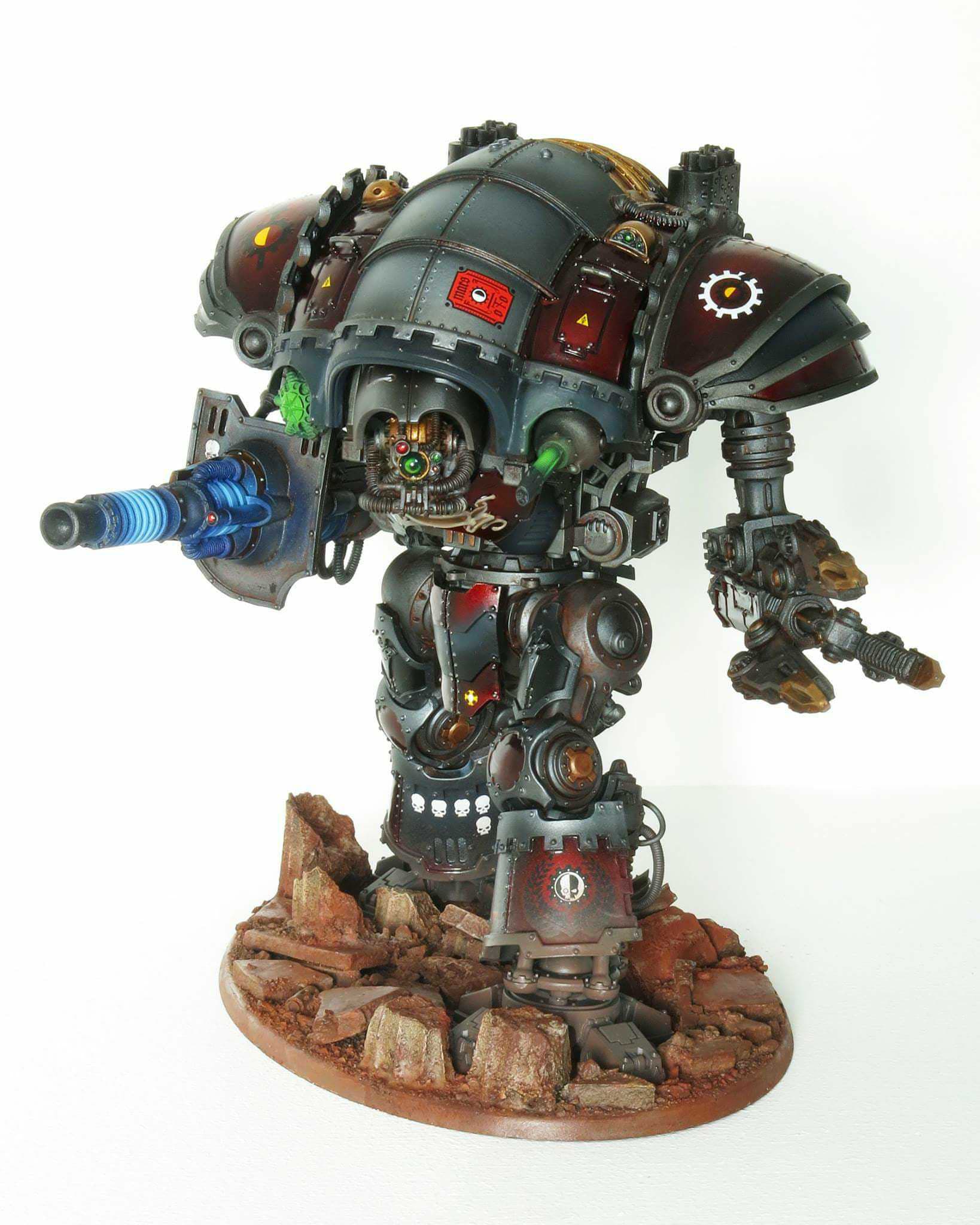 I'll try and get photos of the others later, but these guys were painted by a previous owner, the aim is to get the other nine knights to match these, then go nuts weathering them all.

They are beautiful! I especially love the soft orange glow on the first! another highlight for me is the *perfection* that is the red on the main carapace and shoulders.

Also the basing is amazing.

I can not wait to see the rest of the force as it grows, this will be one of those forces that I keep looking at just to drool!

Works of art. Love Imperial Knights. The new codex should be releasing right after my birthday. "A sign it is. Mmmm yes."

Can't wait to get my hands on that CE codex. Really hope we get some custom dice as well.

Really nice! Extremely so!
I have a Styrix I'm hoping to get to building soon, any advice from your experience building yours would be good to hear.

I'm liking that candy red, what color did you use?

*snip*... the aim is to get the other nine knights to match these...

*Subtle does a spit take*

Other nine?! I applaud your ambition and vigor that is no doubt blended with a bit of masochist. I approve!

Thanks, I have to replicate it on the other weapons when I get to that stage, and decide which energy weapons get which colour. Green for the Lascutter and purple for the death cannon on the Atrapos mainly.

I can't take credit for the paint jobs on these though, as in the initial post, they are the previous owners work.

Cheers, I do too. Whilst my first love was marine, I think the knight are my greatest love in the game.

Again I didn't build this one. I did built another Styrix but then decided against keeping it as a mate was desperate for one so I peeled off the weapons and let him have it.

All I can say really is glue the should mount and gun in place using the cabling as a guide, then then put the cabling under hot water from the tap to do final adjustments.

See above about previous owner. Having looked at the wip pics though, it's the same technique used for other candy reds - black undercoat, airbrushed Vallejo gunmetal sections, then coated in FW red clear.

Knight Atrapos
Two Knight Lancers
Knight Styrix
Knight Maegera
2 Knights as yet undecided on their load out, but probably getting magnetized really.

And then 4 Warglaive collected after work today.

Until I get the other new bits being released soon.

I'm promising myself no more than these ten until they are all done though.

As to why so many?

I'm going to the Throne of skulls 40k event next weekend, and am torn between my custodes army and my knights.

It is a fun event not a true competative one, which is why I'm considering the knights for one last laugh before our codex arrives.

It's 100 power, and I'm lucky to have enough knights to choose almost any combo.

With that in mind, what could be the best "pure" knight army made from the following.

Atrapos
2x lancer
Styrix
Maegera
4x Armiger
2x crusader/errant/whichever - not built yet and they will be magnetised for all options.

Various combos I had consider

Or various other combos.

What do we think?

I think the Armigers would give you some more flexibility and hopefully keep the big boys unimpeded so they can continue to fire volley after volley of pain in to your enemies. I would love to see pictures of the force in action if you do take the knights!

In other news; do you have a paint log / force log for the custodes? would love to see them!

The custodes wouldn't be optimised because of the lack of Jetbikes, but would work as a battallion still and the teleporting Terminators with the Armigerss means it can hit long range and fast.

I've got a few pics on fb, when I get some more done I'll chuck up a few on here.

First three of the four hounds of the household.

I know I said I'm taking the knights and custodes....

But having so much fun building these that I'm gonna airbrush them all together for ease of colour matching.

To hell with actually winning a game, playing with giant frickin robots! 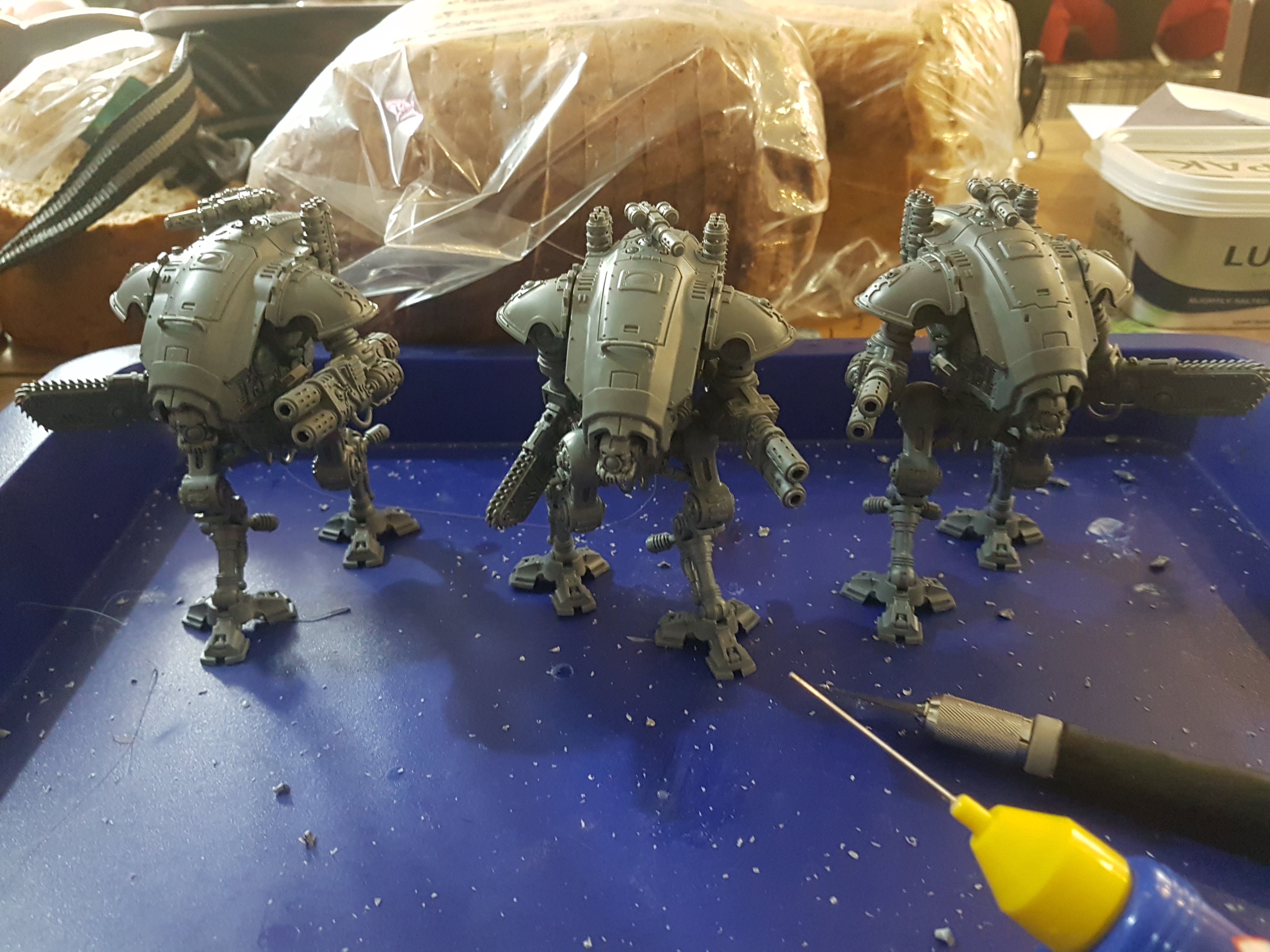 They are extremely fun to build!

Good luck with your robots!

Damnation starts with little steps, by arrogantly thinking that you are wiser than our great forbears, by tinkering with truth, by compromising, by departing from the straight and narrow path of the Emperor’s light.

So finished building my pack leader for the Armigers.

Just because I hope there's a plasma variant coming 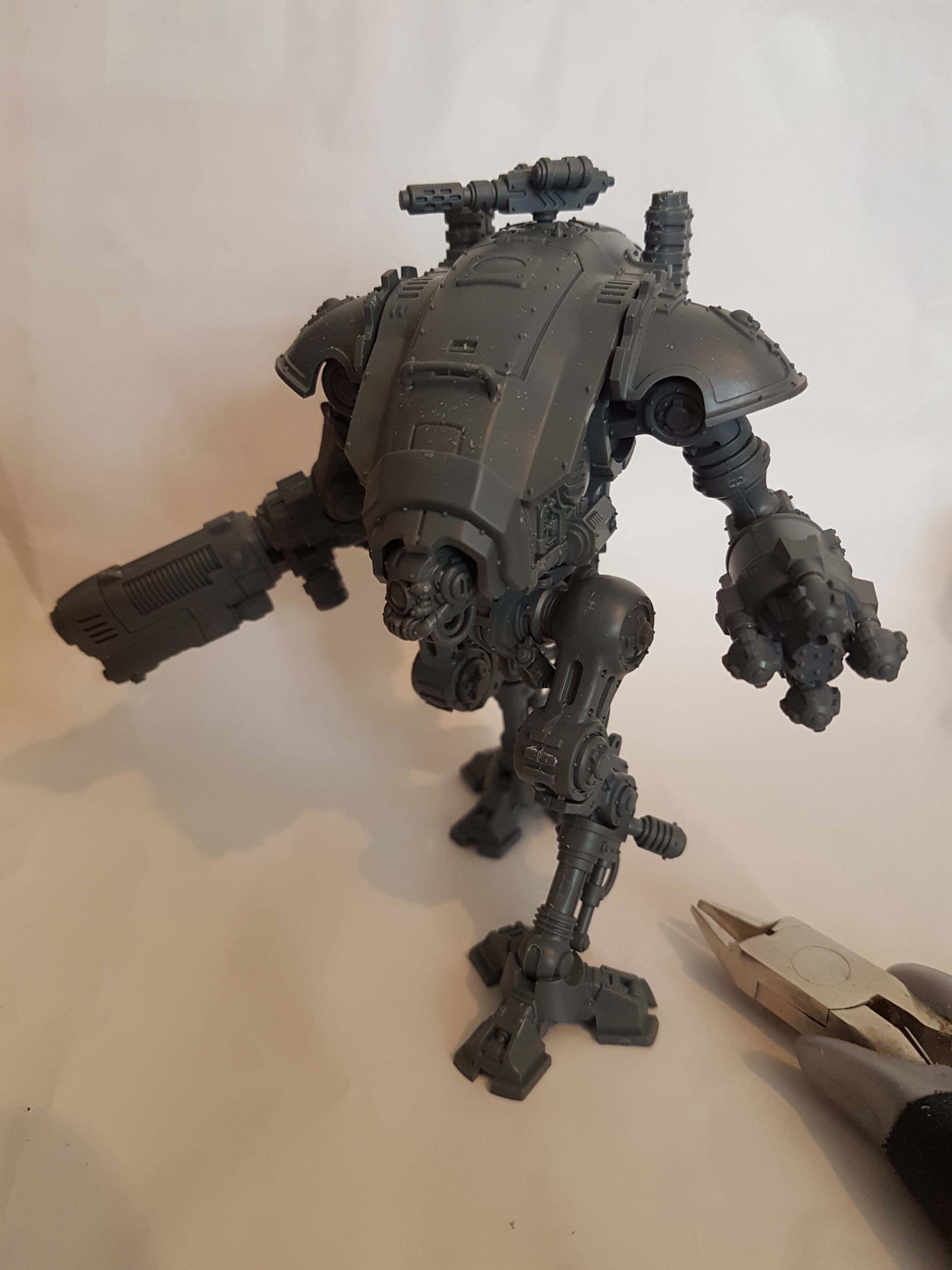 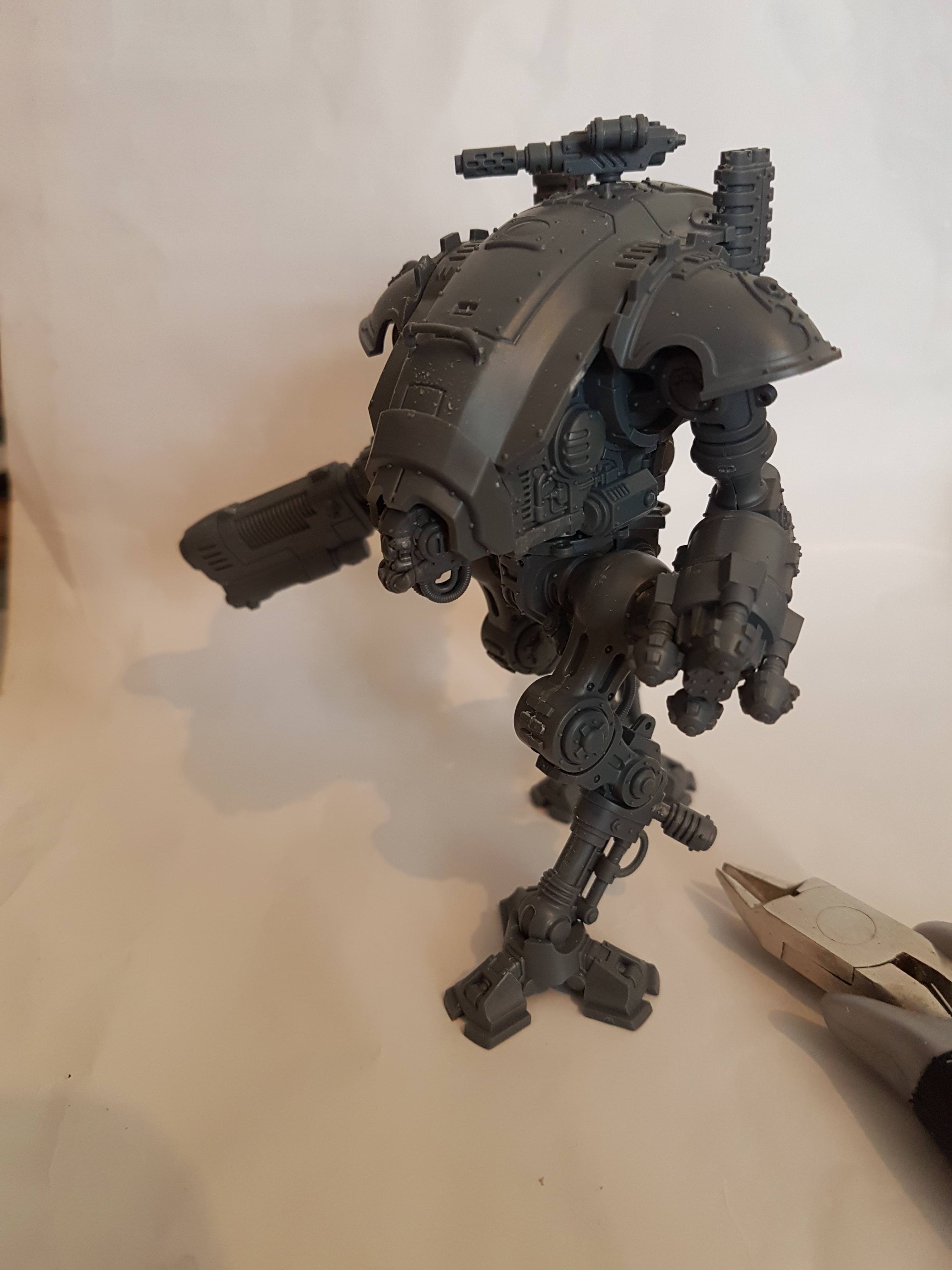 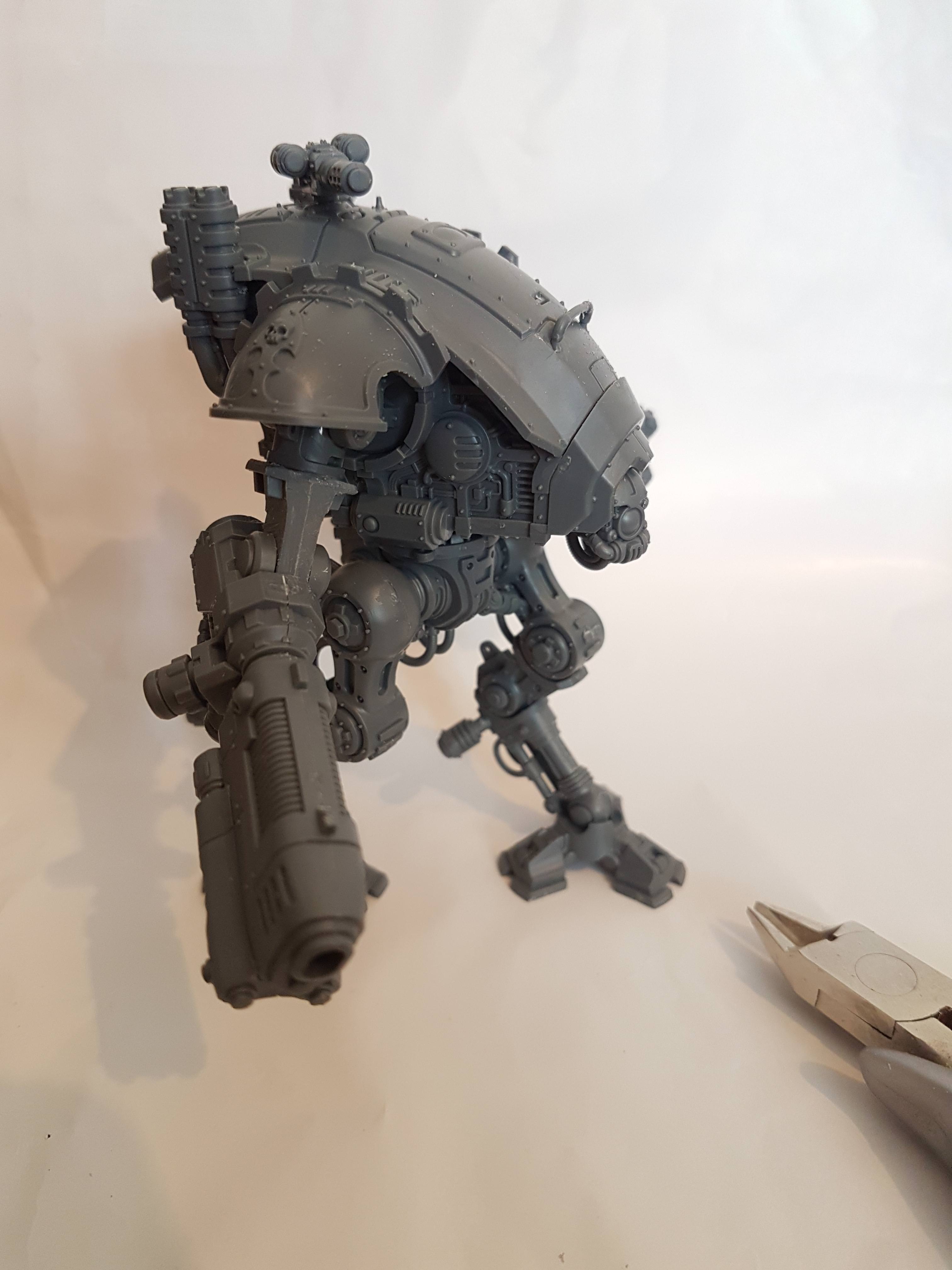 What do folks think? For now it'll obviously just count as a regular Armiger.

I've already mentioned it elsewhere but I do really dig that new guy.

I don't like the close combat arm but that is personal preference rather than your doing. Both arms look really well converted. I hope some rules crop up that let you use it as intended.

I think that is the beauty of these kits - there are so many weapons out there now for Dreads and the like that will fit on them and look great.

I really would like to see a flail,or morning star. The plasma is cool,and I do hope to see that particular variant.

So a day spent painting has meant I might actually have an army to take tomorrow.

Including some experiments with candy red.

Not the best of pics due to the time of day, but it's a start. 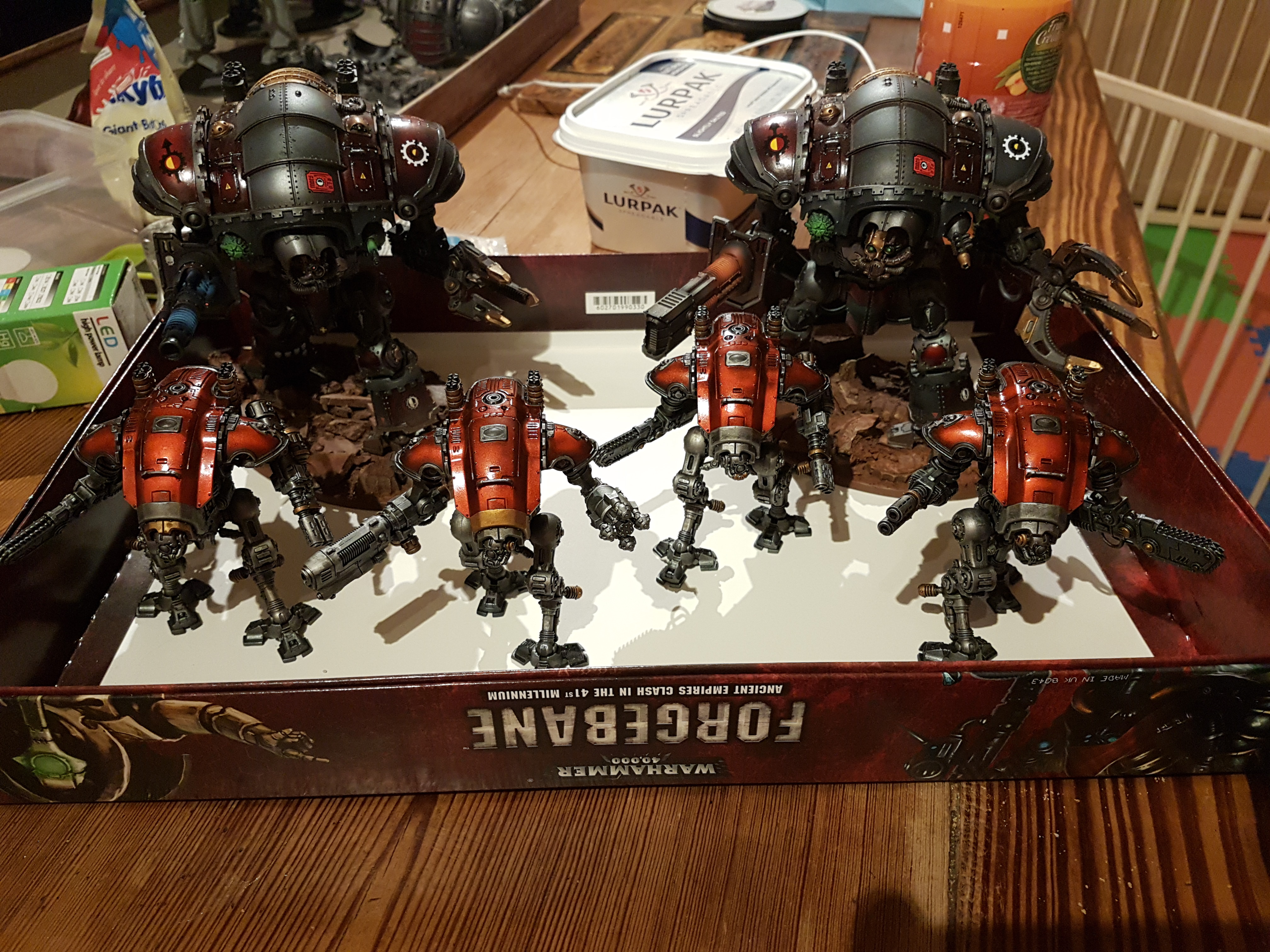 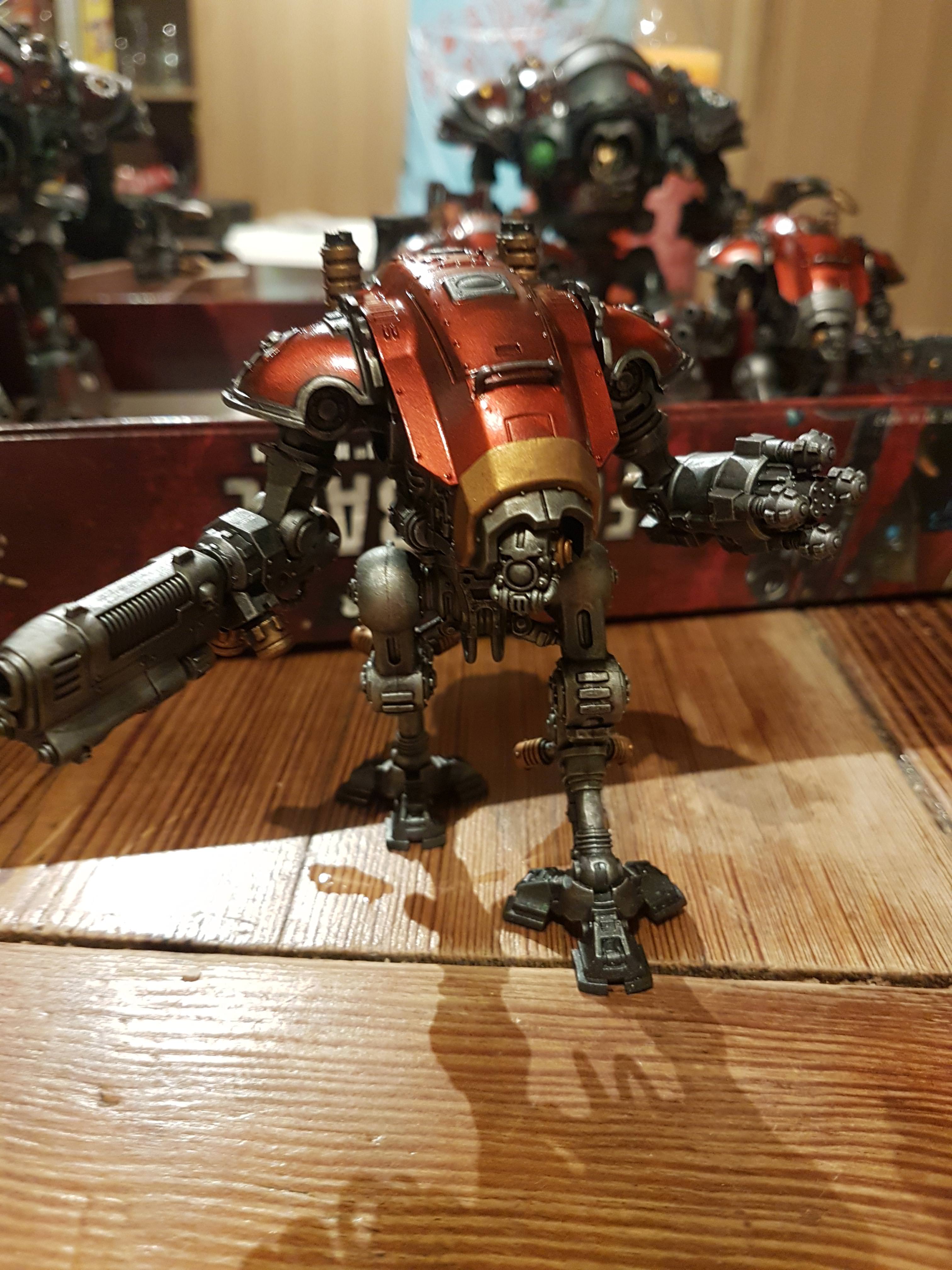 Holy crapola thatnwas painted quick. Awesome job btw love the clear coloured paints. Sadly I have no airbrush to use them with

I really like the candy red too: it's nicely off-set against the original darker red too! I think that even with the different shades, it ties them together effectively. Looking forward to the rest!

Cheers, it was my first go with airbrushing the candy red effect and actually, not that hard to do. Will get better with practice.

I catalogued the stages for anyone interested, all of this is airbrushed

1. Base with a mid level silver
2. Shades the recessed with darker silver, then the flat panels with the brightest silver.
3. Leave to dry for a good hour.
4. Run multiple coats of angron red/tamiya red clear over ot. I used Angron red as it worked straight from the pot.
5. Stop when you're happy with the colour. 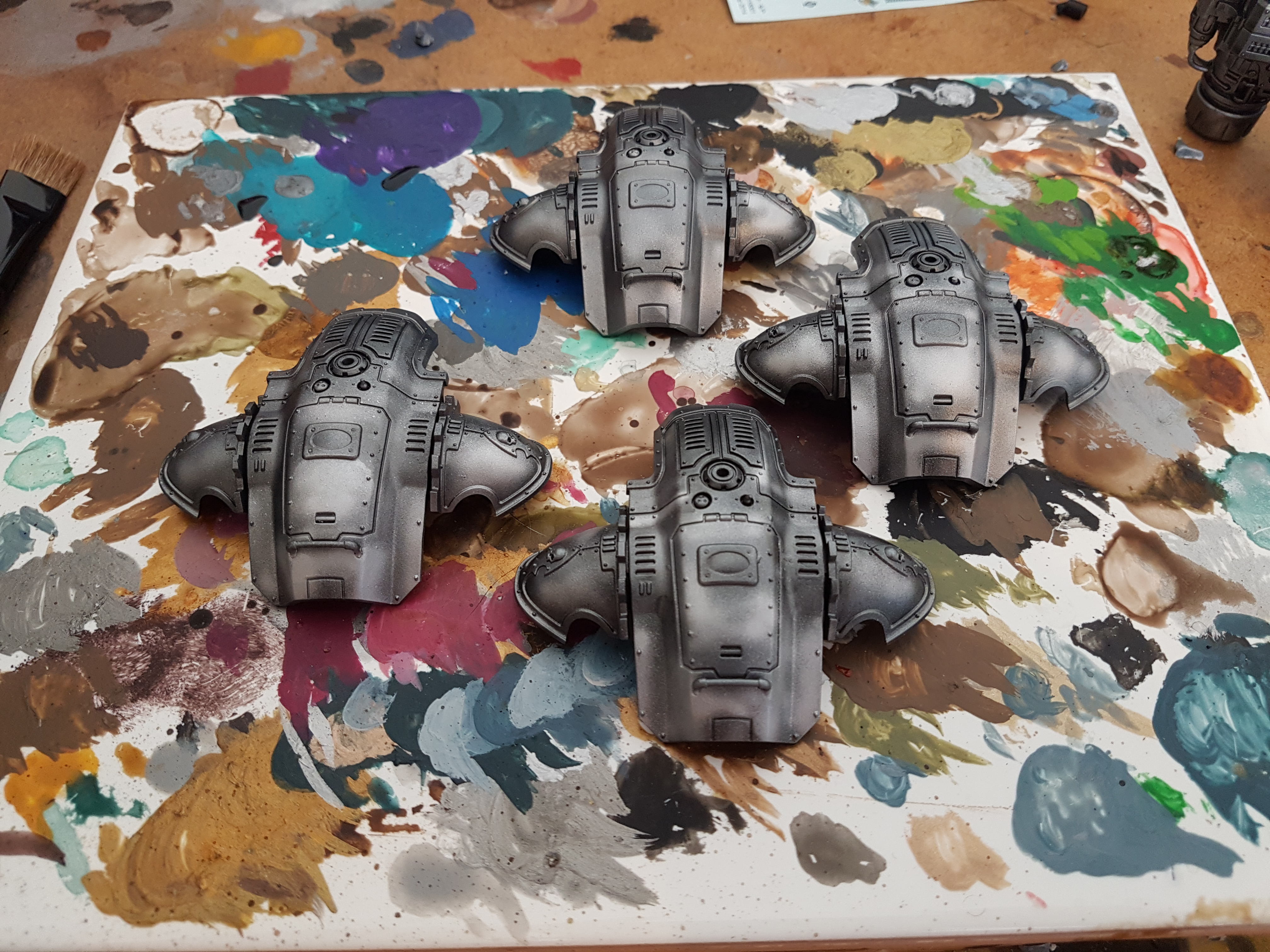 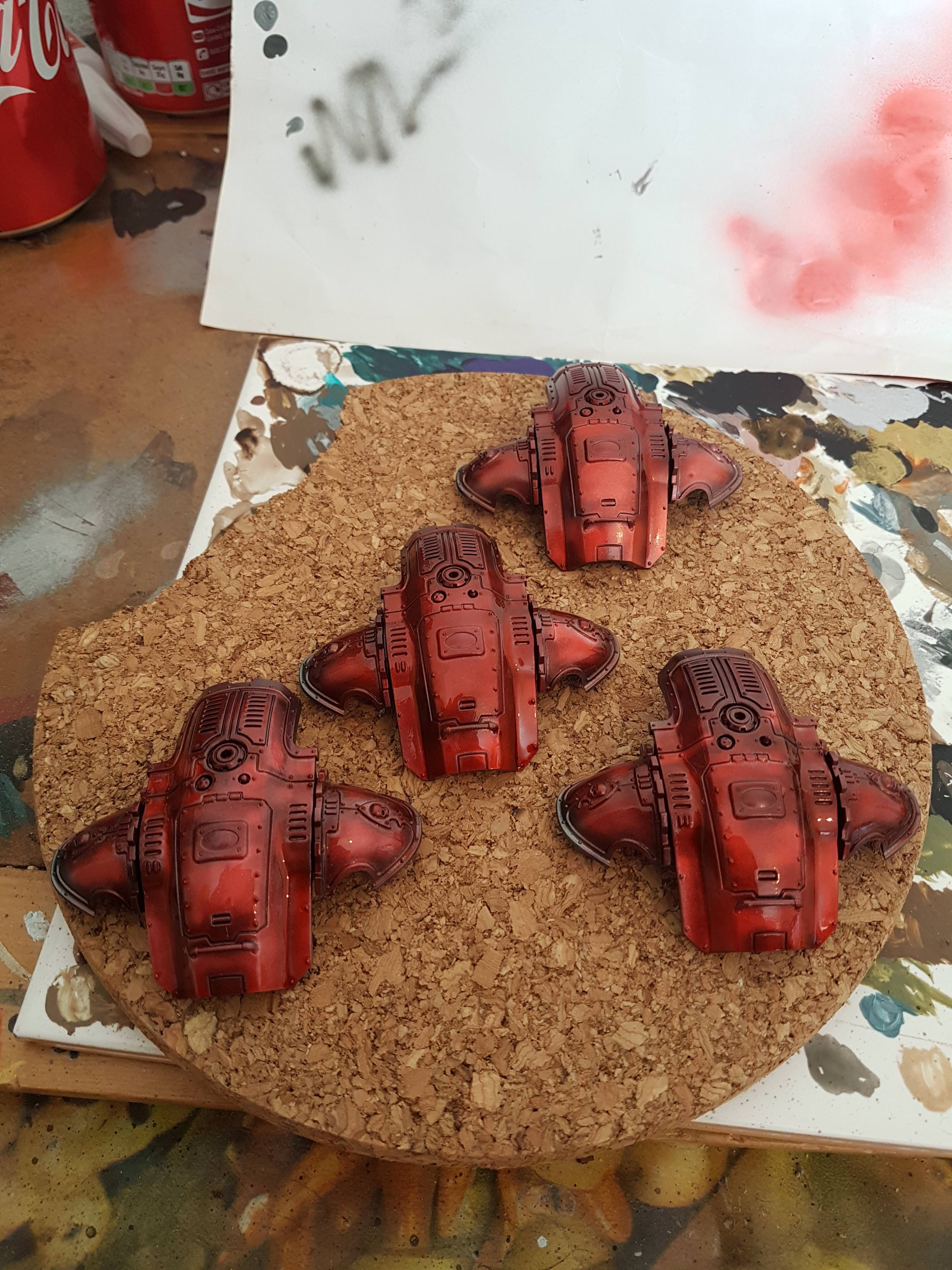 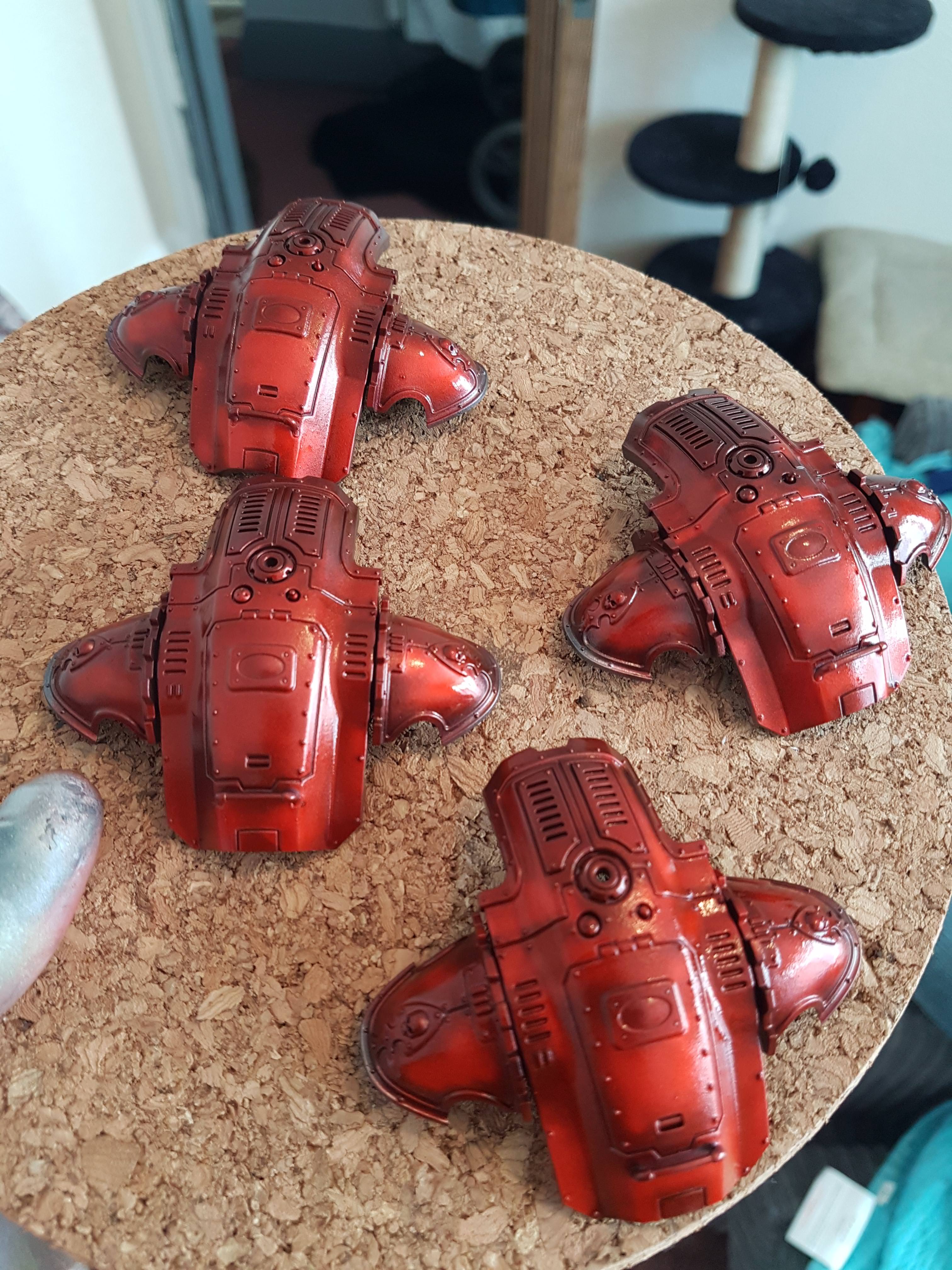 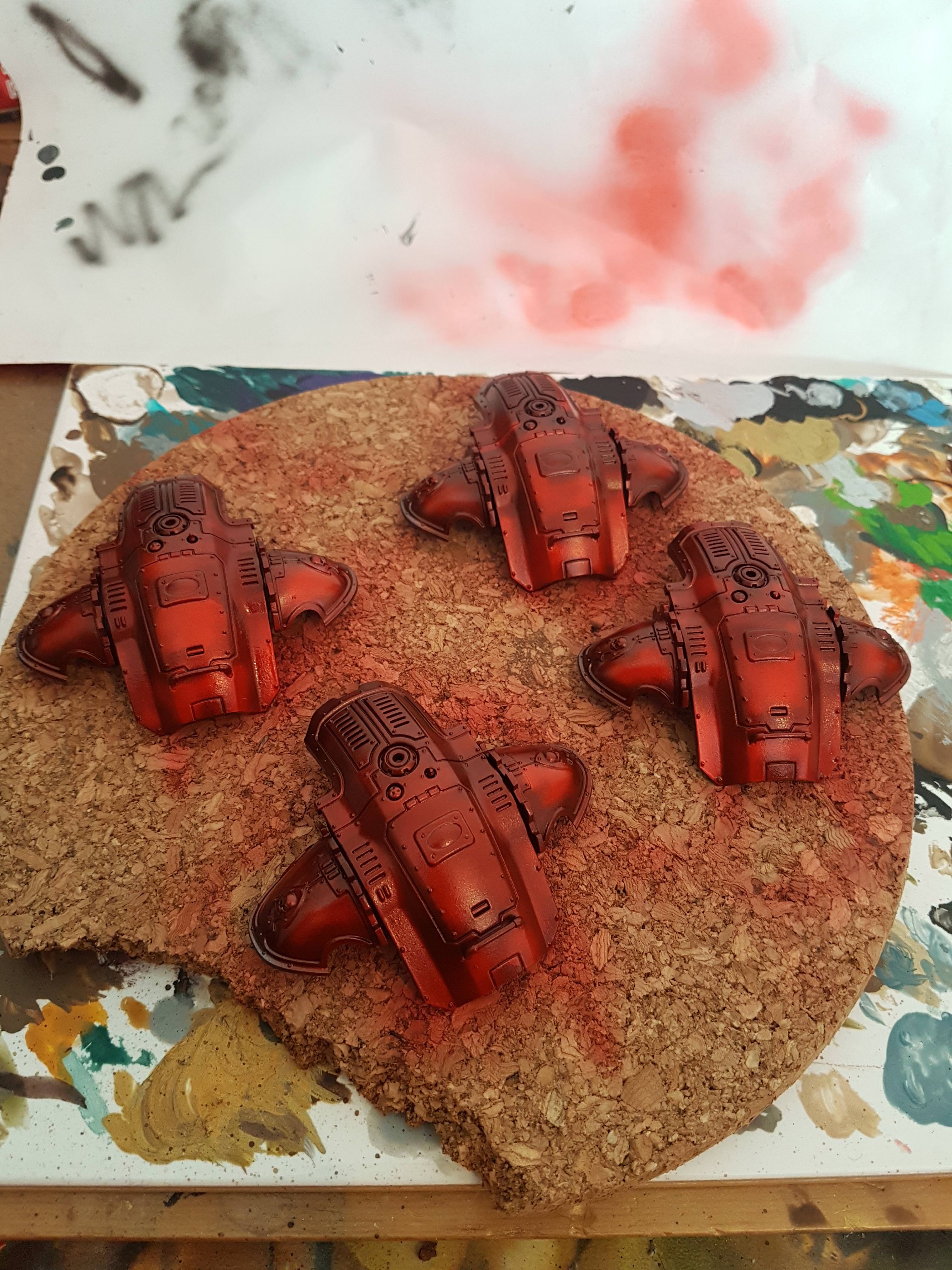 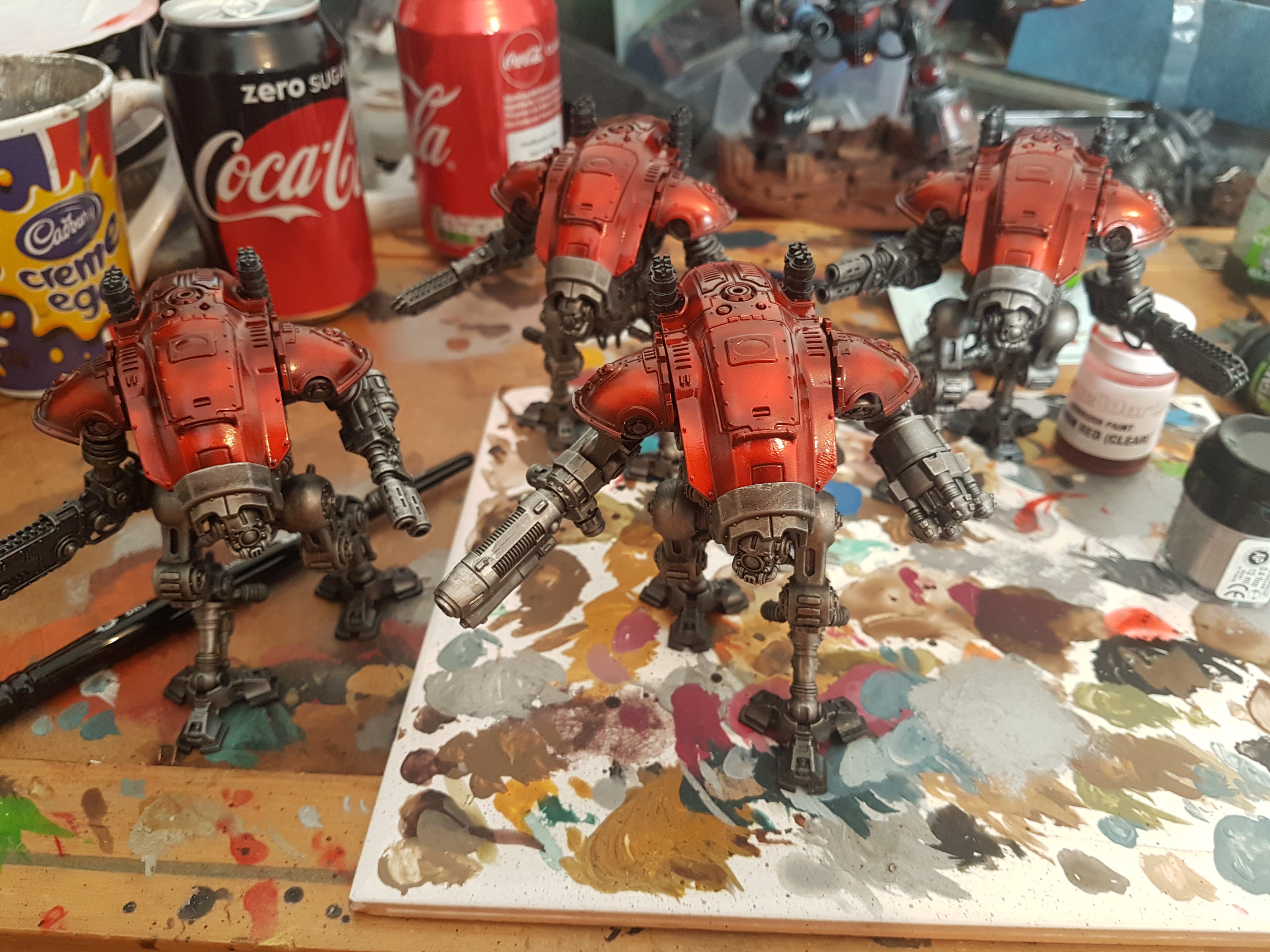 Then leave for a good few hours to dry

Surprisingly straightforward. Can't complain about the results, that's for sure. Thanks for taking the time to post the step-by-step.

It works on marines as well, but you can get tamiya clear blue, green,orange and several other colours, most of which should work well too.

Other folks, thanks - I know it's not the same red as the original two, but I can replicate this colour now, so that the rest of the army can be done the same way and I'm not too worried that the household knights are slightly different in the to the two AdMech knights.

So it's going ok.

Throne of skulls... here we come!