495 replies to this topic

That's a pretty fearsome custom weapon. It's certainly different from the two weapons you built it from. Nicely done!

A sawn off double vulcan cannon, hmmm its heretical

Hermanista a question for you, as you have a lancer etc, do they all have a specific head that corresponds to the type? I am making my mini Titanicus ones and I have a choice of three heads. I kind of like the lancer one with the cheek pads.

Cheers! It's still a WIP but it's getting there.

Heretical my command throne! This is a requisitioned Castigator Boltcannon, a true divine weapon of the Omnissiah!

I got really lucky on the trading pages a while ago

In regards to the Cerastus heads, you're free to use whichever afaik

Cool thanks for the info, I now have a lancer I shall call him MiniLance.

One day I will get a proper one, they look like the best knight for me.

They are pretty awesome!

And in other news, I'm off to play on WHTV at some point.

Am made up to be asked, will obviously let folks know when a date is decided for it.

Definitely tell us when your on, is it with the knights or are you taking something else?

With the knights, gonna go play against my mates lovely looking custodes army. 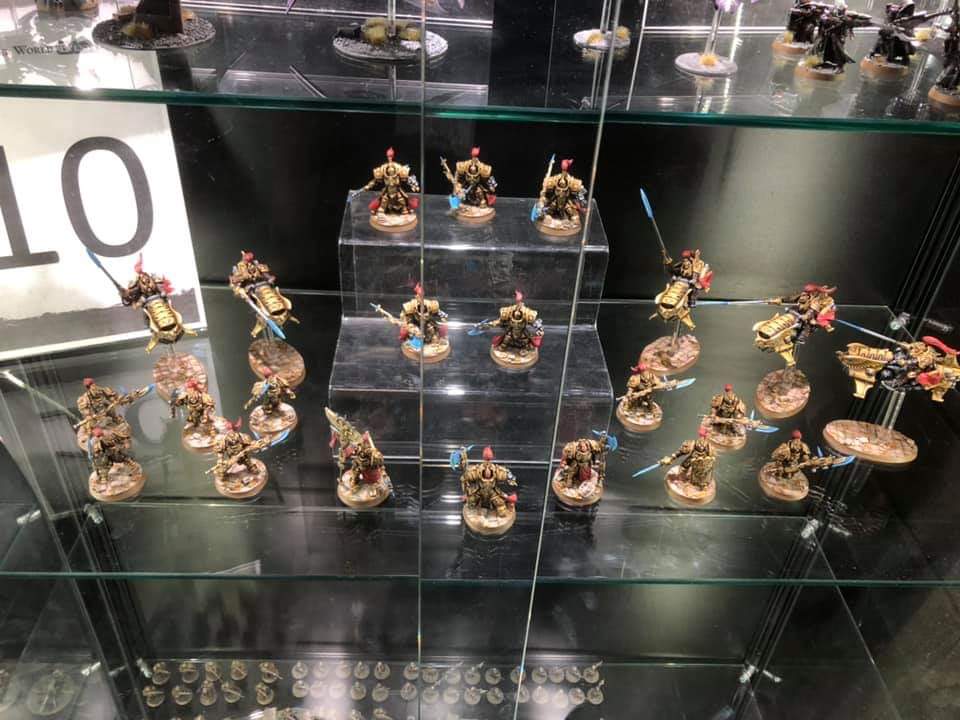 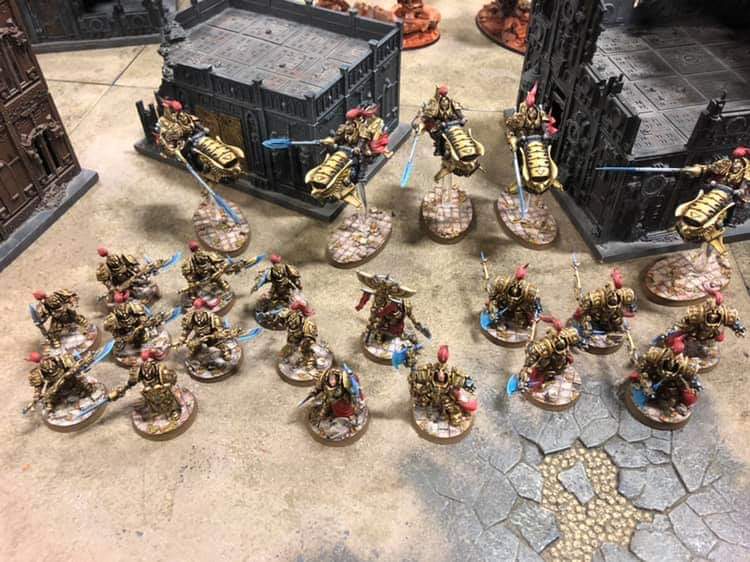 Hes got various other bits, I just have a picture of the caladius and telemon etc.

Nice one. I’ll definately tune in 👍

In the mean time I've started planning a list and building my second to last knight, which will include the great magnet addition time of the build where everything get magnetise.

I'm also planning on painting up the spare questoris armour sections at house Vyronii, I love their colour scheme, you can still get their decals from FW and it means if I ever run 2 households at an event they become easy to differentiate if I can swap armour bits due to them being magnetised.

So the Expo tournament starts Friday morning and whilst I've been plugging away at getting a gallant done in time, it's just not going to happen when I set off for the event tomorrow morning.

Still, I might as well show off the progress - both arms are magnetised meaning plenty more options to come for lists in the future.

It'll most likely now get finished in time for my trip to WHTV in July.

I also had a quick go on some spare carapace pieces of a green, not the normal house Vyronii green as it turned out, but something more sinister and beetle like.

This may well become the scheme I use for a chaos I might force if I do one.

Red pre-shading under green gives it a very blue bottle green sort of shade, which I quite like I think.


And finally, back to Friday- with the knight unlikely to be finished, I decided I probably can get a couple of cawdor models to mount of the bases done, including some of the crossbow grenade launcher heavies to count as Ironstorms.

That being said, the list is an old faithful one, amending slightly in line with the new 4++ max save rules

Crusader with Thermal and Ironstorm

Then something appropriate for the second knight if needed - such as the three characters missions.

Those are beautiful shades of red and green.

Again the Camouflage works really well whilst among the Heretics of the Sugar gods...

At first I thought that green carapace was a colourshift paint. That red shading looks really interesting. It makes the armour look antique to me for some reason.

So after four games, I'm current rocking a 3-1 success rate and the Knights of Ni are doing me proud. Last game to go tomorrow.

Once the two Helverins that I took as house Mortan disposed of the dark talons, the lancer tanked the slam captains and it was game over.

Really narrow defeat in a mission that is always super hard for pure knights, made even harder by the fact I mocked up my target priorities. Lost 6-4 which is pretty close tbh. Should have stayed together more really, but live and learn.

I was down 5-4 going into the Fifth round, but first turn had dropped Morty down to 1 wound before all the spells went on him.

He went down turn two and although it went close, won out 9-5 in the end.

Game 4 vs Space wolves, supplies from above.

Really rough game for the wolf player, total mismatch once the three units of long fangs were dealt with.

The guy had actually played day 1 with his knight + guard army, then left it on the train on the way home and lost it. The wolves was a last minute replacement.


And then some army nomination pics.

So game 5 tomorrow, suspect I get either the purple eldar biker army above or a 3 caladius custodes army.

Tough either way, but looking forward to it

Thanks for those lovely pictures, shame about the Orks but I look at them and would have no idea how to deal with them.

I feel really sorry for the guy who lost his army

Well, I lost game 5 to the custodes, should have called a ref on a rule dispute, so I've learned my lesson.

However, this then happened...

2nd place and best painted army, really surprised and pleased by both.

What was the rules question if you don’t mind my asking?

What was the rules question if you don’t mind my asking?

So I was able to turn 1 charge one of the three Caladius tanks of the opponent, that was on the first floor. He had another on the second floor.

He declares that the top caladius is 6"1/2 inches above the ground and more than 2" from the edge because the building has a base. Bit of a misunderstanding as I was going for the one on the 1st floor not the damaged top floor one.

We discussed and eventually I just didnt want an arguement and carried on.

However if I had gone round the side slightly, which I had more than enough movement to do, I would have rammed five ws 3+ with rerolls lance attacks into it, wound on 2s, no saves. It would have been golden scrap metal.

Lost the game 6-4, that would have put me 2-0 up before hed had a go and one caladius dead, one with 1 wound remaining and one with 8 wounds.

Ah. I’ve been there before champ. It’s when you just think meh it’s not worth the argument but then after you regret not sticking to your guns

Only infantry and flyers can climb floors I think