490 replies to this topic

Only infantry and flyers can climb floors I think


Which is why we have this lovely stratagem.

Devastating Reach (1 CP): In the charge phase, pick a TITANIC Knight that has not yet charged, then pick an enemy unit entirely within ruins or a Sector Mechanicus structure (which must not have any models on the ground floor). That Knight can charge the enemy unit, and if its charge brings it within 2" horizontally and 6" vertically of the unit, the charge succeeds and the Knight can attack it in the fight phase (but not with Titanic Feet)

So june was the crazy month, work end of year, got married, honeymoon etc but now it's back to gaming.

Got my first ETC event coming up this weekend, so a new mission style to try for the first time.

Forgeworld is also banned so to make up for that I've gone a bit more current meta with the list.

As usual it's based upon what I have painted compared to being 100% competative, but it's listed here.

Should be a laugh at least, first round is against another knight list with a crusader warden and gallant from Krast, rusty 17 and a mortan warden.

First turn will be huge in that I reckon.

hermanista: Hunny its been a wonderful month but I am off to game, see you in a month!

Congrats btw I hope your ring has a cog on it!

So, in a few days I get a run out on Fridays warhammer TV game slot (6pm GMT).

Lists were submitted yesterday, first up Doug is taking the following with his custodes.

So not a competative build, just a bit of everything.

Obviously I wasnt taking a competative build as that's no fun, so running the following.


Massive 9cp to spend, but folks get to see my beloved lancer on screen and I'll run the styrix as something less commonly seen in gaming.

Will be tuning in. Best of luck

If you lose, there will be jokes involving Knights and bananas.

But seriously, best of luck buddy. Will be cheering you on from the stream audience.

Good luck I will be expecting the Ominsisiah's Perfection!

So last night I ticked off something on the bucket list, making an appearance on WHTV against my mates custodes.

This morning having got home and slept, happy to report I came away with the win, even better after getting battered in our warm up game earlier in the day - winning 18-15 on the stream is a really close but enjoyable game.

The WHTV team were top lads, and it was a great experience to go behind the scenes a little.

Got a few pictures, including some screen grabs from the game.

Will go back and watch at some point, it wasnt my most competitive list nor way of playing, but it all panned out ok. 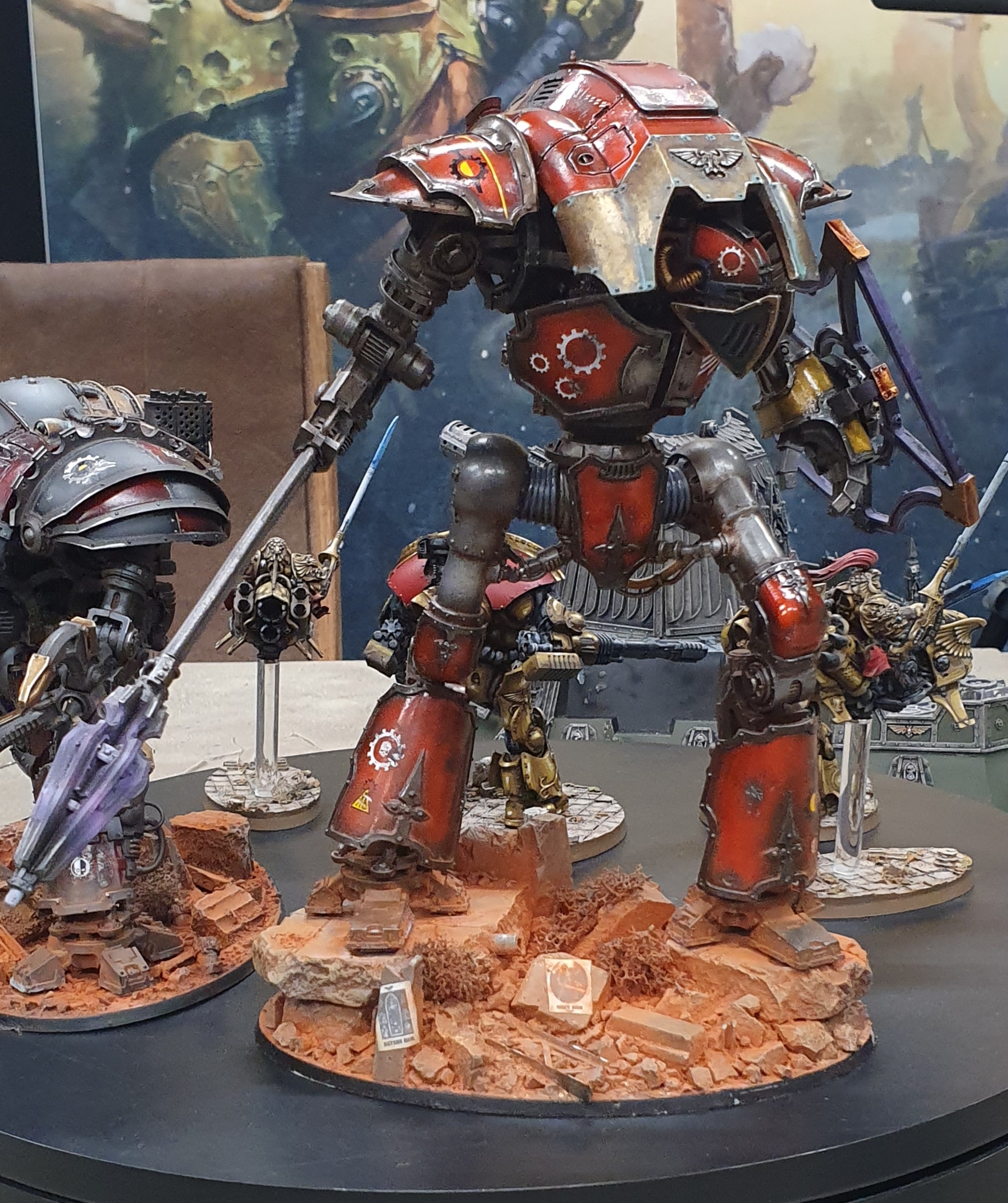 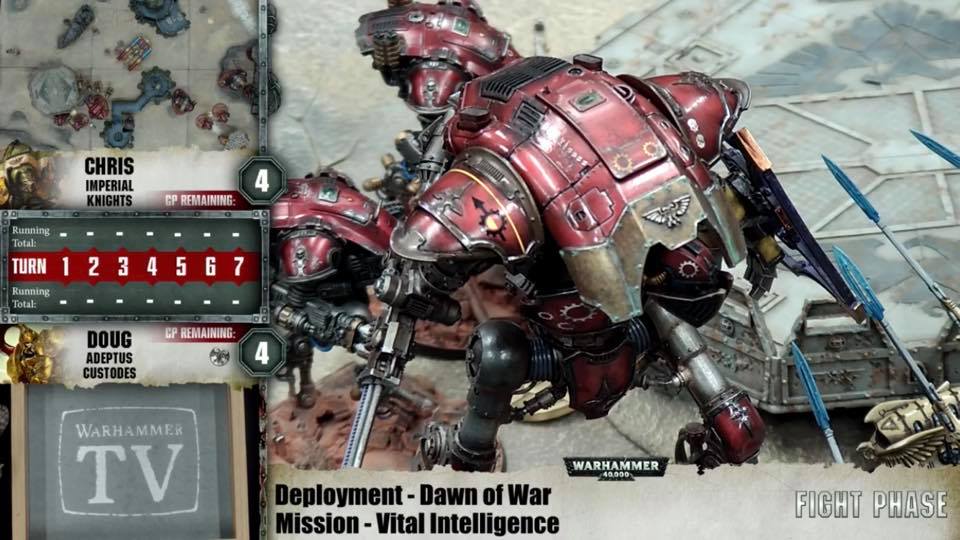 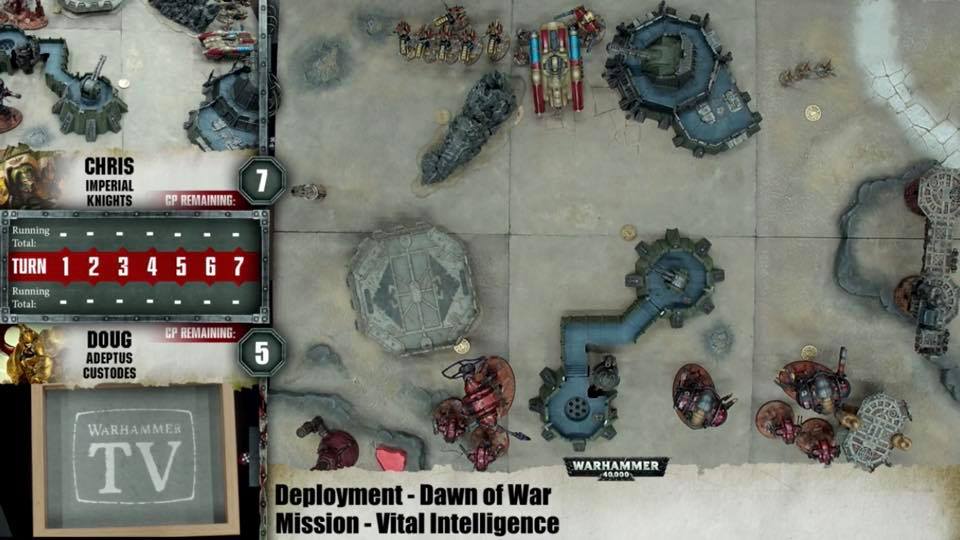 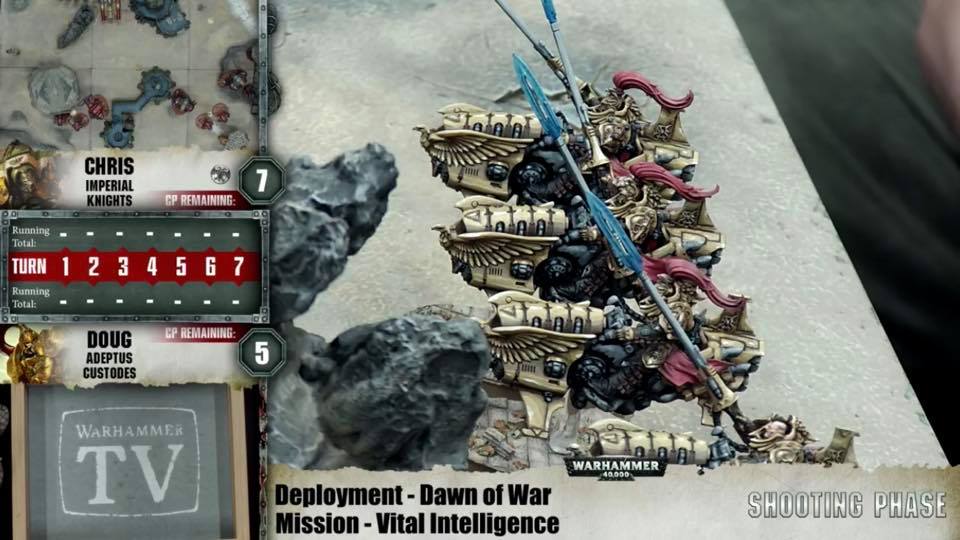 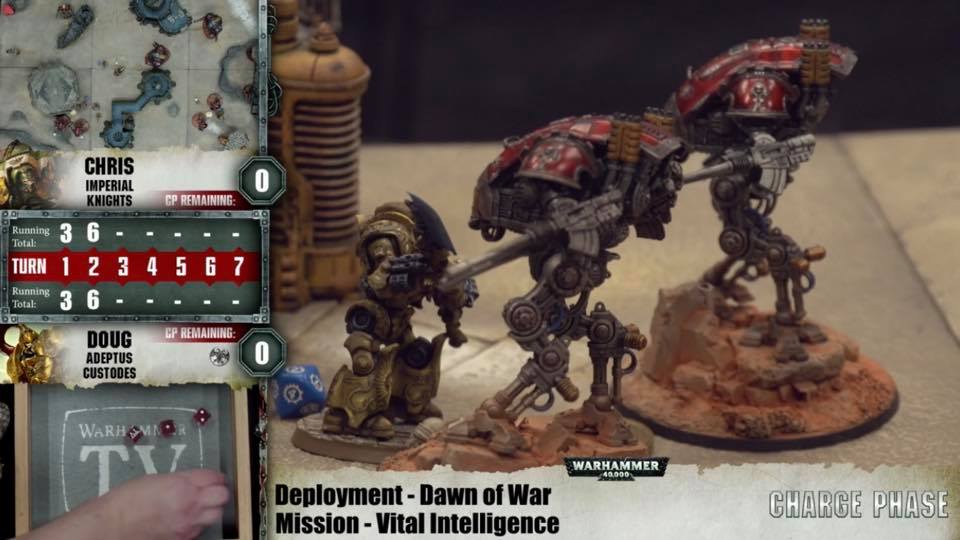 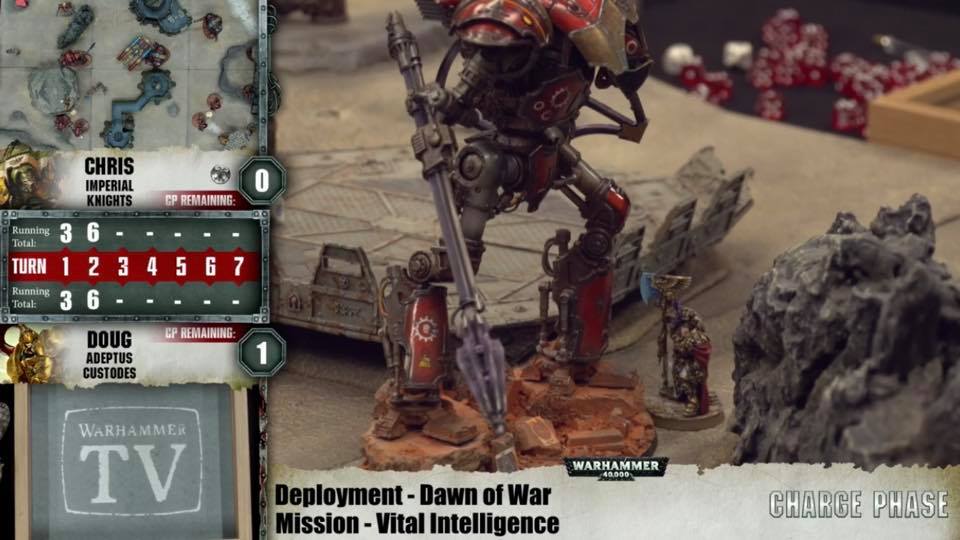 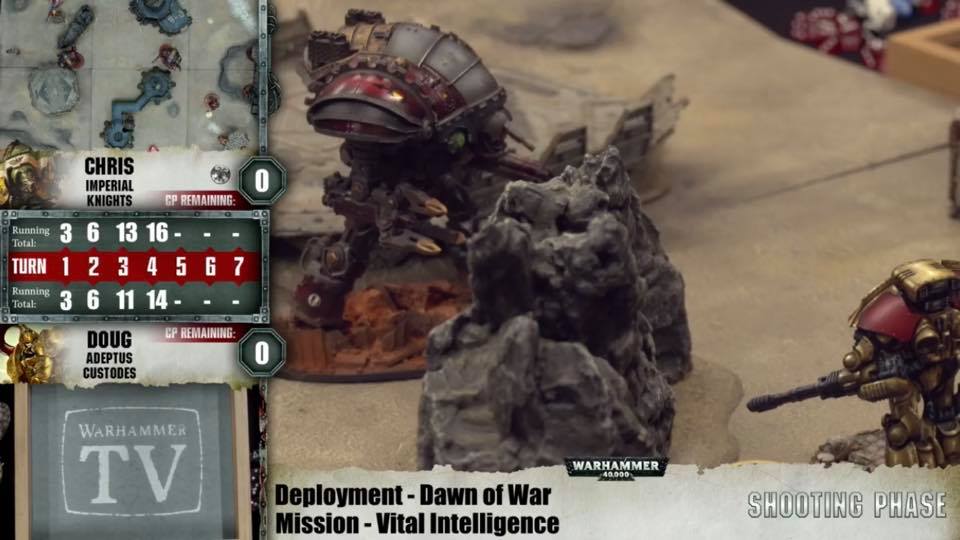 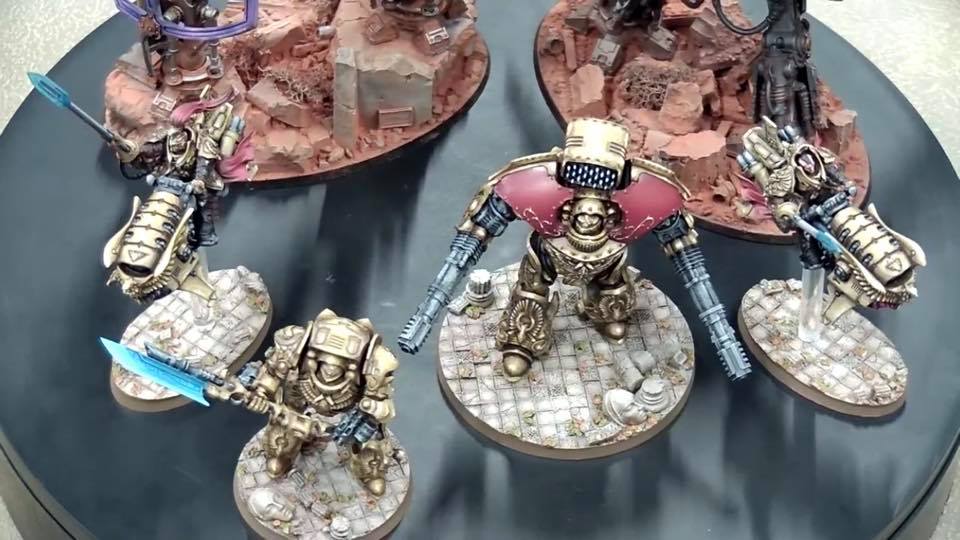 Gutted I missed it. I’ve tried the link but it won’t play for some reason.

Congrats on the win and the performance

Gutted I missed it. I’ve tried the link but it won’t play for some reason.

Congrats on the win and the performance

Are you subbed Clingy? You can only watch previous broadcasts if you are. Otherwise it's the live content only :/

Well done on the win too Herm!

('tis always a pleasure to see the carrion gods forces murdering each other, yet more so when some of them are his personal bodyguard. Cue evil cackle.)

Im guessing not lol. I’m a bit of a twitch noob. How do I sub is it like a registration thing?

If you have amazon prime you get a free subscription to subscribe to a channel each month .

Oh I actually do, nice one I’ll check that out

So trip to warhammer world yesterday saw me pick up 3 lightning lock moirax to go with the 2 volkite ones I picked up back at Expo.

Heat 2 is in a few weeks so when I get back from larp I'll be getting the 3 lightning built to run as a vulker detachment.

36 shots, exploding 6s to 3 hits, or 4 if using saturation bombardment is a nice bit of relatively cheap chaff clearing.

1747 points and 9cp. Lots of exploding pew pew if Endless Fury gets used.

So started on my Moirax for the weekend, list has evolved and is much better now I think.

Lancer as above, thermal Crusader and claw Warden, plus the 3 vulker Lightning Lock moirax.

More shots and almost as vicious in combat still.

Really enjoyed putting the Moirax together, they're drying on the undercoat side currently so for now its housework and assembling the little lads first bed

Nice one - do they fit nicely, or was anything warped?

Got 3 on the way myself - two lightning lawnmowers, one volkite for style.

Nah all pretty much spot on, just a few alignment cracks on the lightning cannons themselves. So all good.

Decided last night that with other things to do this week I won't be able to get all three done by Friday night.

So cheat time - into the freezer went three of my armigers, off comes the arms to be replaced by the moirax arms/guns.

Much easier and quicker, so just finishing those arms this morning and they should be all good to go.

The varnish is just drying atm having done the silvers and shading, followed by the grime layer in a bit when the varnish is dry.

And then airbrushing the coils and last details afterwards.

It's not cheating, it's optimal rerouting of effort.

Yeah, I'll start mine on the weekend hopefully. Do you intend to do the new Acastus too? Rules seem a bit lacklustre, but the model is brilliant (except for the too long arms).

Nah, I doubt it. I sold my Porphyrion on just before the FAQ hit, and the new one isn't brilliant.

Cerastus will be my biggest ones for now.

In the mean time, the triplets are 95% done and put together.

Needs a few tweaks when fully dry, but picture worthy at least. 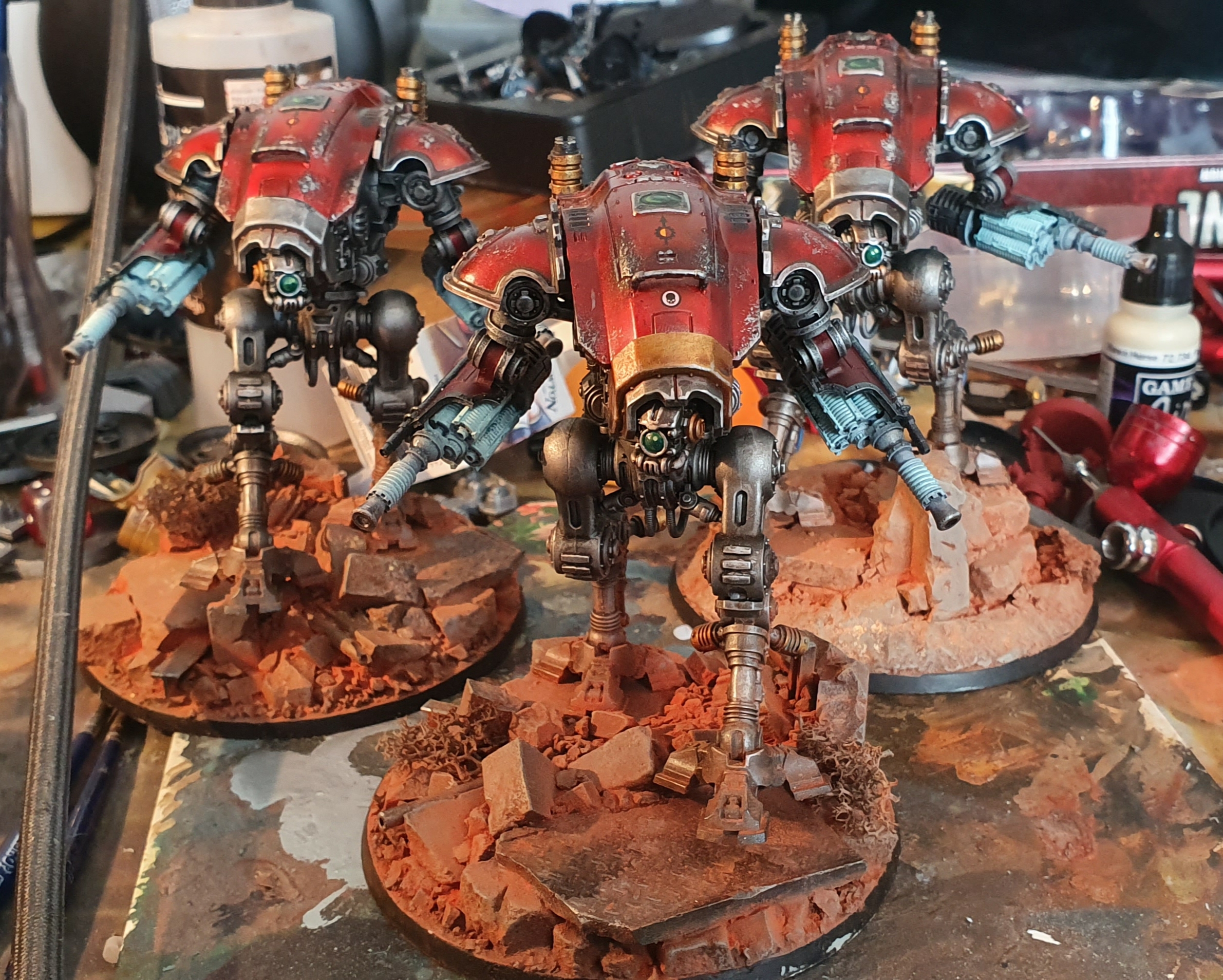 Roll on the GT this weekend!

So decided one thing letting the force down is the bases, so I made a small start on sprucing them up, along with remembering to go and finish my Endless Fury conversion 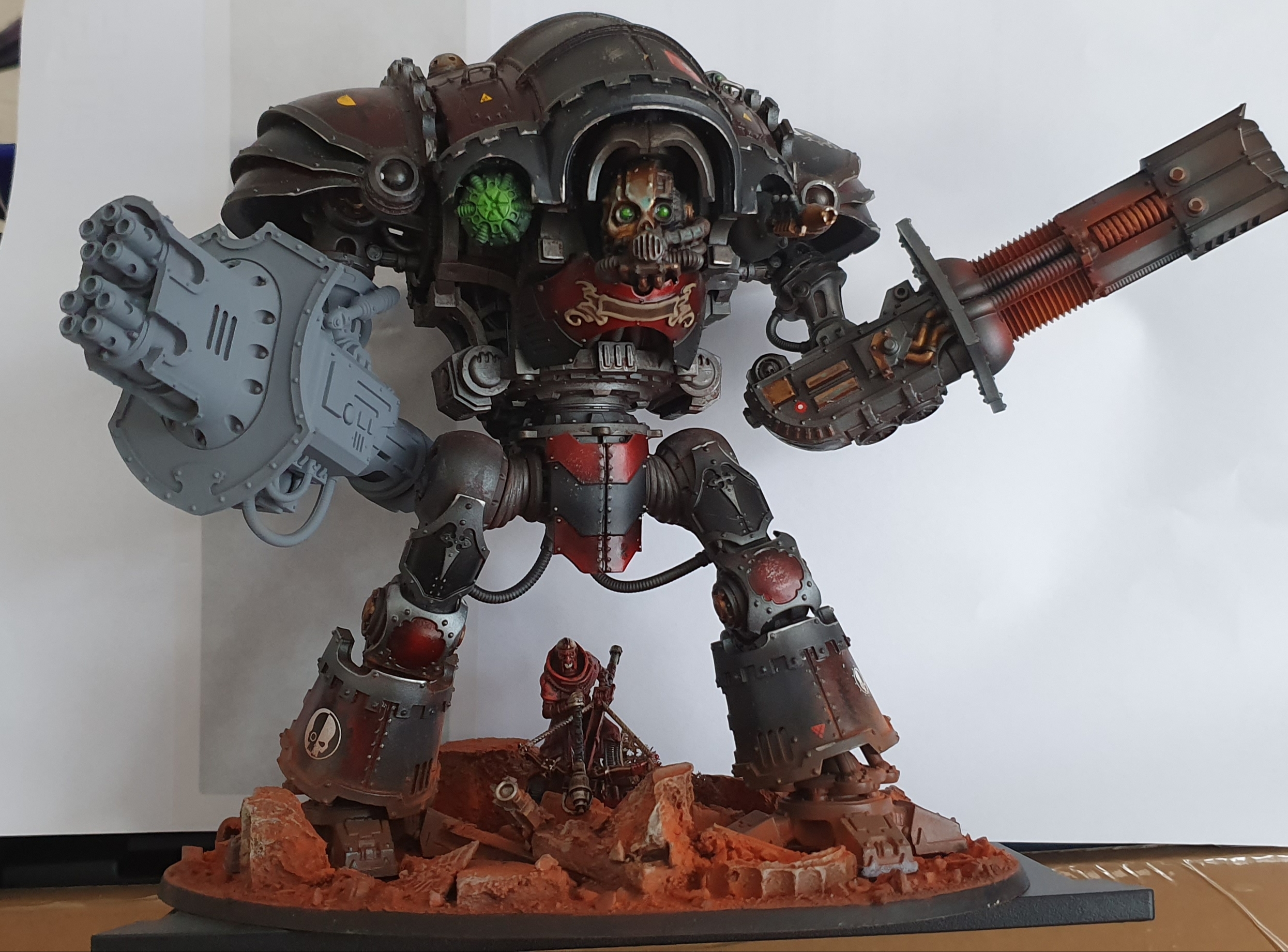 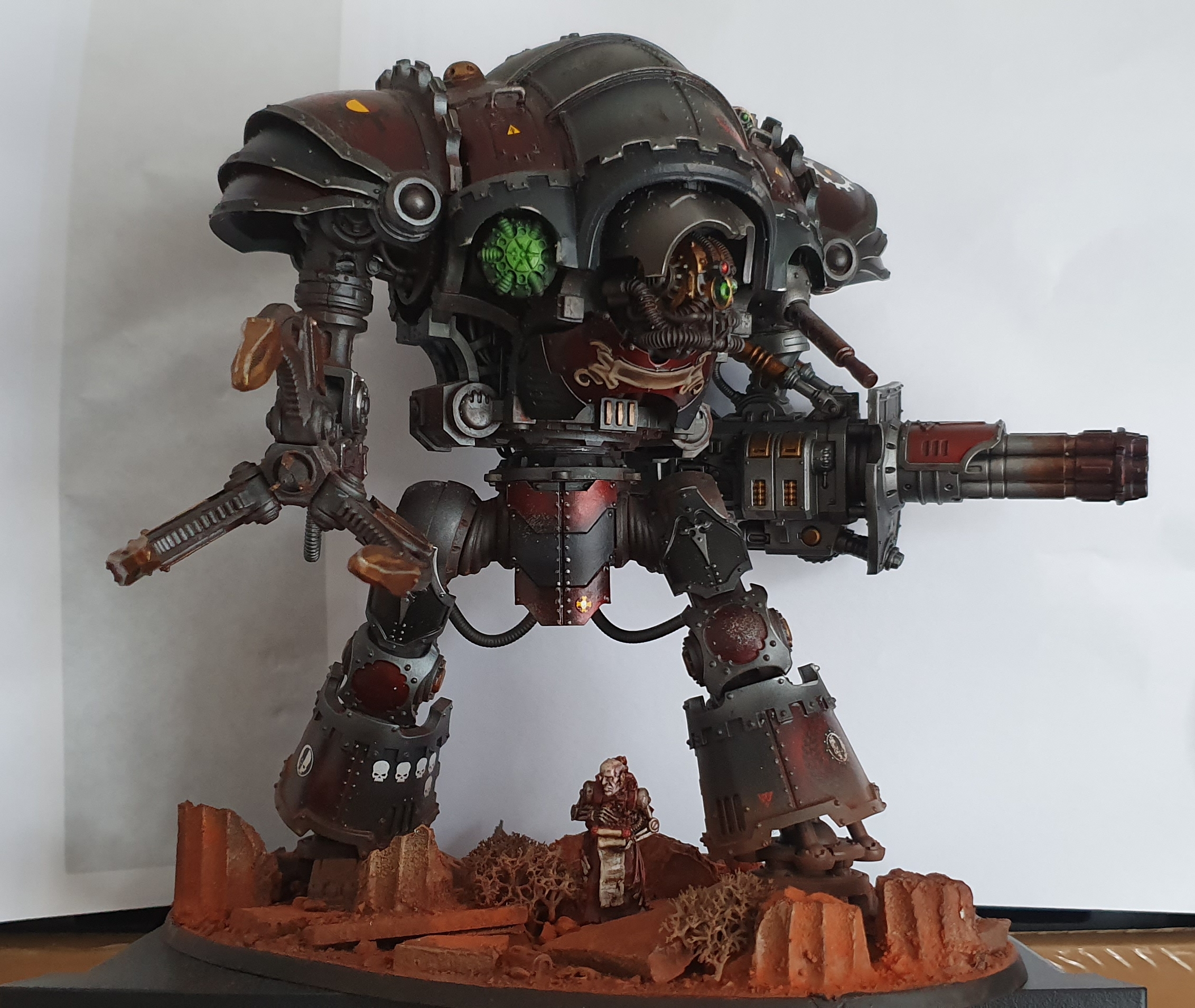 I'm really liking the scale difference, with how small the human sized models are when put with the bigger Knights

Excellent work on Endless Fury and the Armigers.

So for anyone interested, I'm on Warhammer TV now for round 2

Your lancer is taking a longing look at that raised walkway.

Well two wins and a draw after day 1, pretty happy with that - Moirax are awesome, I expect chaos Moirax would be sickening popping them up to str 7, damage 2.

Drew with a mates dark Angel's round 1, beat the tau army on stream round 2 *spoilers*, and beat a necron army up at the heady heights of table 13 in round 3.

The scary armies come out in round 4 tomorrow, looking forward to it though

A win and loss on day two, so finished 18th.

Further details when I get home, but that has qualified me for my first GT final. Hooray