[Posted in the wrong section. Please move.]
Of relevance to the science fantasy setting Warhammer 40'000. Copy-pasted from an advice reply over on T9A for Mad 'At's Citycape Skirmish Blog, since much of it could be of general interest to wargamers all over. Mad 'At is by the way an accomplished scenery builder and miniature painter, as should be evident here, and it's something out of the ordinary to play across his club's terrain at some Swedish tournaments.

As always, very good terrain work. The shelves with bottles and the book stand are exquisite. The warband looks very nice as one would expect, and bonus points for good background stories!

I guess the board will double up as both sewers and streets with canals? I'd highly recommend you paint some odd stones in different tones to add interest to the plain grey board as it stands. E.g. blue-grey, reddish brown, beige, blackish grey. Likewise, a little moss and painted lichen clinging to stonewall surfaces can break up the grey monotone and give life to the texture:
[align=center]

[/align]
It can easily be done, and is a simple way to improve terrain. Needn't be Golden Demon level, something quick like this from a Danish Frostgrave table adds a lot.
Also, a touch of ivy somewhere could be neat. As could the rare tuft of grass growing between cracks in a stone or brick wall (not the street stones, that could impede placing bases around). Yellowed grass will help keep it grimdark if that is desired. And a simple bird's nest somewhere high up in a ruin could add a lot, maybe with eggs in it.
Onward, wood can easily be made to look more organic on miniatures and [lexicon]terrain[/lexicon] by adding a few streaks of grey or grayish-greenish-brown (Catachan Green is a classic) into thew woodwork. This is not to say that all the wood surface shall be covered in it, but that once one have painted it brown, one can add a few veins of grayish green.
[align=center]

[/align]
Clever take with the ruined parts of Avras (Constantinople and Rome rolled into one) for a Mordheim game. This is probably not what Cityscape Skirmish players want to see, but what the heck:
In both the case of Rome and Constantinople, when they got largely depopulated and the living city shrunk back within the walls, parts of the former city were given over to farming and pasture for cattle, goats, swine and sheep. So that you had a living city centre, huddling together around the Vatican in the case of Rome, and lots of ruins and abandoned enormous monuments, falling apart in urban decay. And scattered amid all this was some agriculture within the city walls.
So you could include some field or orchard in a misplaced location, e.g. on some broken-up market square or within the walls of a ruined temple whose roof collapsed long ago. Perhaps some makeshift little stable of herdsman's hut thrown up against the towering stone wall of some ancient grand building. Maybe even stray farm animals just for flavour without any effect whatsoever on the game, moving out of the way automatically as the warbands roam about (or perhaps breaking line of sight and possibly stampeding in panic for some odd scenario - or being a cattle raid)? Maybe some broken statue could enhance the ruined impression?
Likewise, as a bone thrown to fungoid Goblin fans out there, you could make a patch or two of brightly coloured mushrooms who release spores with odd gameplay effects in their vicinity, particularly for sewer play. And some unearthed mass grave, for all Necromantic needs.
Furthermore, don't be afraid to add burn markss to frayed and damaged edges of ruins. It can aid with the visual impression. And speaking of marks, some old dried blood stains or just stains of mold, dung or dirt could help break up the grey stone expanse. Not big spots and splotches, but ones better done with a detail or stippling brush.
And if you ever do a living inhabited city quarter, you could include posh ancient fluted columns and other intricately carved stonework that has been looted from old buildings and built into newer ones, such as shoddy little mansions. Here are parts of some ancient Greek columns from the Bactrian kingdom still in use in Afghanistan today:
[align=center] 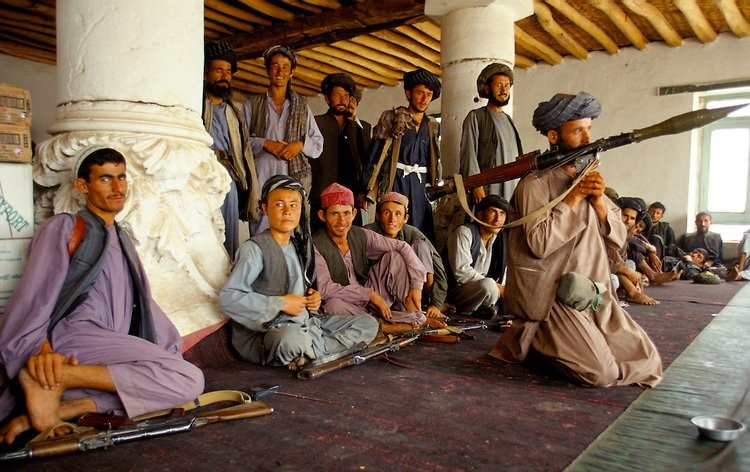 [/align]
Also, while much more relevant to sci-fi than to fantasy, some graffiti in the form of chalked or coal-drawn clan markings, pathfinding signs or unholy occult symbols drawn by gibberish madmen (Chaos stars and so on) could be added to some ruin or another. Perhaps Roman, Viking or Egyptian style?

Just throwing ideas in case anything is of interest.
Hills as Dump Piles
On a different note, how about spicing some of your hills? Tired of all wargaming hills looking virtually the same? While we all want a flat surface on top for movement, the steep hillsides are usually open field for add-ons, so long as they don't interfere with movement trays on top and units passing by.
While moss and flowers can be added to the sides of hills to bring nature more into the game, there is also another route which can be taken. Simultaneously with the vegetation, in fact: Hills as dump piles.
One dump could be corpses and skeletons, such as this Hill of the Slain, an illustration for Silmarillion: 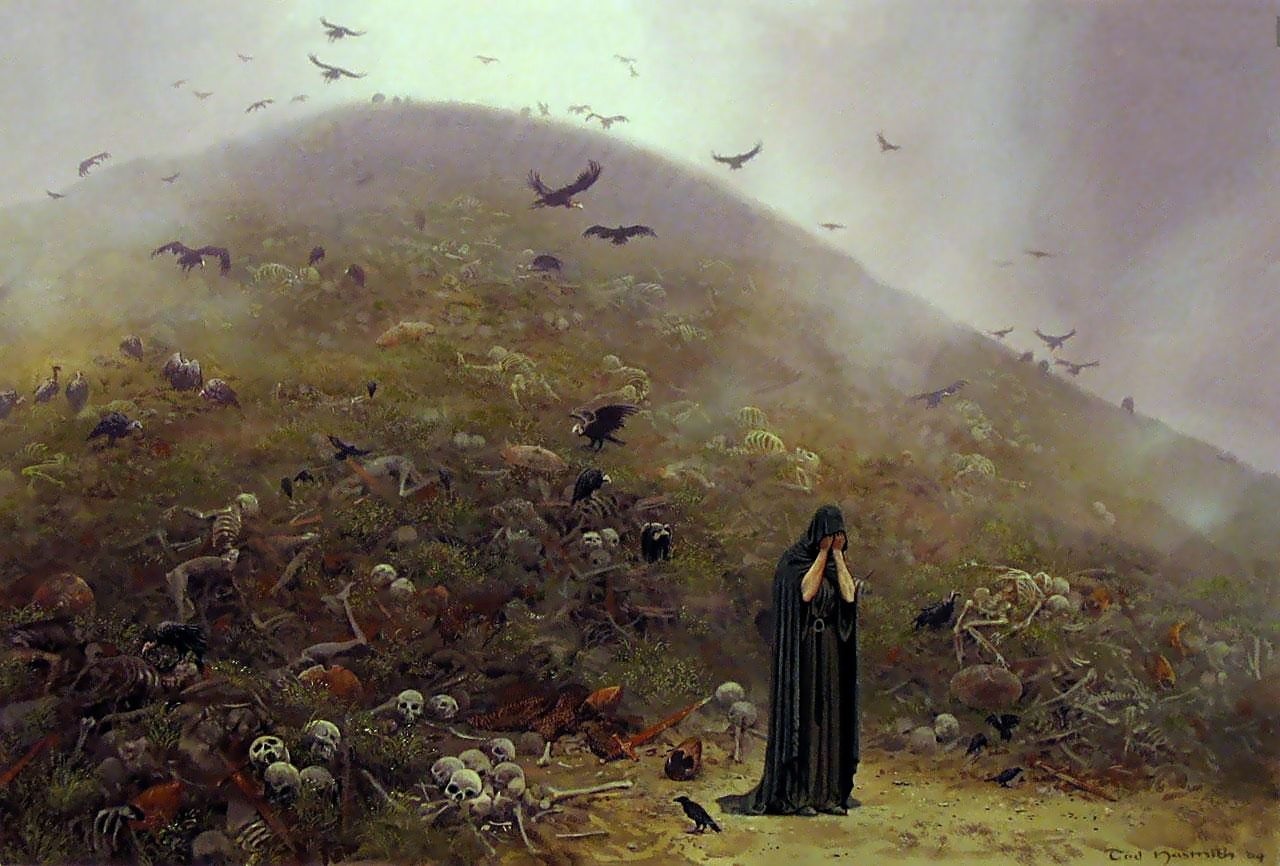 Another could be ruin stones poking out from the sides of the hills, some bearing ornate carvings, like the Schuttberg in Germany made up of rubble from cities bombed asunder during the Second World War: 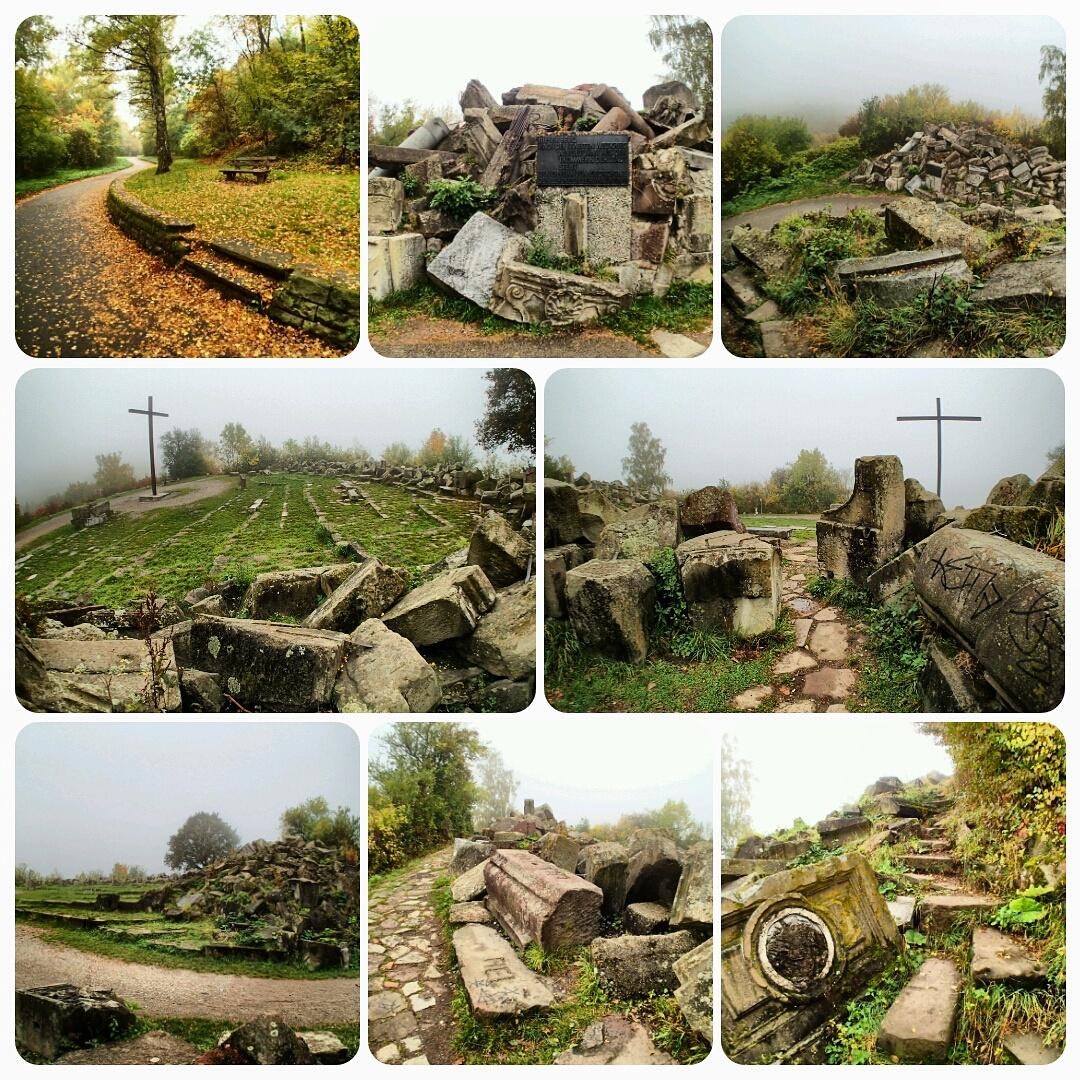 Another could be a Tell, an ancient settlement mound built up of layers upon layers of sunbaked mud brick. Perfect for desert tables. Some artistic license would work best here, since the outermost layer of bricks usually crumble down to an indistinguishable dust layer. Instead, make some sections of the hillside be worn brick wall visible among the earth. Could include pottery and bones for extra effect:

Yet another take on a fully or partially artificial hill could be to make it a dumping ground for waste, such as one made up entirely of pottery shards stacked on top of one another, akin to Monte Testaccio in Rome which is a hill made up of millions of discarded olive oil amphorae during the city's ancient heyday of bustle and consumption:

And last and least, how about a dump pile for Skaven underground digging? All those tunnels and caverns clawed out from the earth must leave a lot of waste, that needs to be dumped above ground. This would be an ordinary hill, but perhaps with some Skaven skull or broken ratman shield or weapon sticking out from the earth, rocks or grass of the hillside. The same could be done for others than the verminous swarms, of course, including Dwarfs (runestone proclaiming ownership of dump pile material by some clan?), Chaos Dwarfs ( sprinkled with obsidian shards and dead Goblins?) and Goblins (Goblin waste, including dung, broken gear and fungi).
Just make sure any such vertical/diagonal additions to hills are done in a friendly fashion for tabletop movement.
Got any tips of your own to share? Do please spill the beans!