I’ve never used Biologus...I’m not sold on him on paper. How do you find him?

I've run the cc Marines once and they took out a knight with his grenades. Going to play this list over the weekend and see how they do.
The idea is if I don't finish deploying first, deploy the Deathshroud on the board. Within range of the hauler and Mortarion, also with the 2 PM squads, lord, and caster. I think there are too many good targets for the enemy. I think Mortarion will be the prime target, leaving my rhinos to go where they please. The hauler gives a good alpha strike cover save, but then is fast (with no degrading stats) to take an objective or be in their deployment zone for an easy point also being a nice distraction. Teleport Typhus down whenever the Poxwalkers disembark and the Deathshroud if they were in reserves. If I advance my PM's at least I have 4 shots with plague launchers as I do with the lords re-roll bonus.

why do you bring a tallyman rather than a chaos lord in your rhino?

I feel the Chaos lord can actually be good in melee for only a few more point.

You do lose the 1/6 chance to get CP back, but you dont have that while the tallyman is in the rhino anyway.

The Tallyman allows re-roll of all misses in the assault phase while the Lord it's just 1's. So I use the Lords re-roll for my shooting units that he can also help if they make it into combat.
Most of the CP's I plan on spending will be when that unit is not in the Rhino. I may have to burn 1 for a re-roll or something, but it should be minimal.
I thought about a 2nd Lord or even a FDP (also losing the Plaguecaster to do so), it's still up for consideration.

After some rushed consideration, I think that is a better idea. I can lose the Tallyman and Plaguecaster for a Flying DP. This allows me to keep my 7CP and is yet another nice distraction for my Rhinos.

Well this tournament is only 1650 points, so should I keep Morty or let him go? The wife votes keep, "he cost a lot of money to just be sitting in a foam box".

I ran two games with this list today, orks and eldar/dark eldar.

This was my first time facing orcs in 8th, man were there a lot of them. I felt severely out numbered and thought just go for the objectives. I went first and drove both rhinos up the middle and popped Typhus right between them. My PM's on foot & Hauler went right and DP/ Morty went left. Put the Deathshroud in front of Morty. I shot at some boyz and his battle wagon/tank thing. He then ported a group of 30 boyz behind my PM rhino and grabbed an objective I left open. He charged the rhinos and failed to do much damage, I think he killed 1 PM his turn and was up by 2.
I disembarked both rhinos and played DWA, Typhus cast Plague Wind and got 6 of them and smited 2 more. The PM's got with 2" of the other group and I bombed them, killed 18 of them, charged and got the rest. I pulled the rhinos out of combat and Mr Blightspawn took out the battle wagon thing. Between Typhus and my Poxwalkers I killed off another unit and I was at 40 Poxwalkers. Mortarion killed a tank and a unit of 10 big boyz or something. Deathshroud kept him alive and DP got killed from tank shots. He called the game at 3 turns.
The second game I went second, he shot everything at Morty and failed to wound him. I charged up the board and brought down the Deathshroud/Typhus. He shot everything at Morty again. He took 4 wounds and I lost 1.5 Deathshroud. My PM's jumped out next to a raider with 2 units on it. I Plague bombed it, destroying it and taking out 3 passengers, then charged and they were gone. Mr Blightspawn took out a tank. The Poxwalkers jumped out turn 2, I lost a couple but grew back to 10, Typhus had killed the rest. So they jumped back in the rhino and took off (but they never got to disembark again). My DP took out unit of fire dragons and then curse of leppered a unit of reapers who were within 7 of Morty. He called it after Morty took out a tank then 10 avengers. 4 turns and he had had enough, well all he had left was a farseer and a fire-prism.

People underestimate a blight bomb squad, several on lookers where very impressed. Between both games they took out 40 guys and a reaver, while I only lost 1 and then sec obj. Both games the Poxwalkers were in their faces fast and Morty got so much thrown at him and lost 1 and 5 wounds. I like the speed of this list and still maintains high damage output.

I will say the Deathshroud were too lucky, they intercepted 2 lascannon shots which I failed my save, they did 12 damage. I passed 11 with Dr, then they got hit again for 11 more damage, DR saved 9!

So I'm good with this list for a tournament next Saturday.

I just played a 500Pt where the tyranid charged and killed My DP, then got Blight Bombarded to Oblivion. There is no arguing with mortal wounds, cant underestimate them.

Did the Deathshrouds got to do anything other than being extra Wounds for Morty?

The Deathshroud made it into combat once, but by their turn to attack Morty had already destroyed the Falcon(?). It's my opinion that the amount of wounds they intercepted for Morty and the damage he did, they were worth it.

Here is my army for tomorrow's tournament. 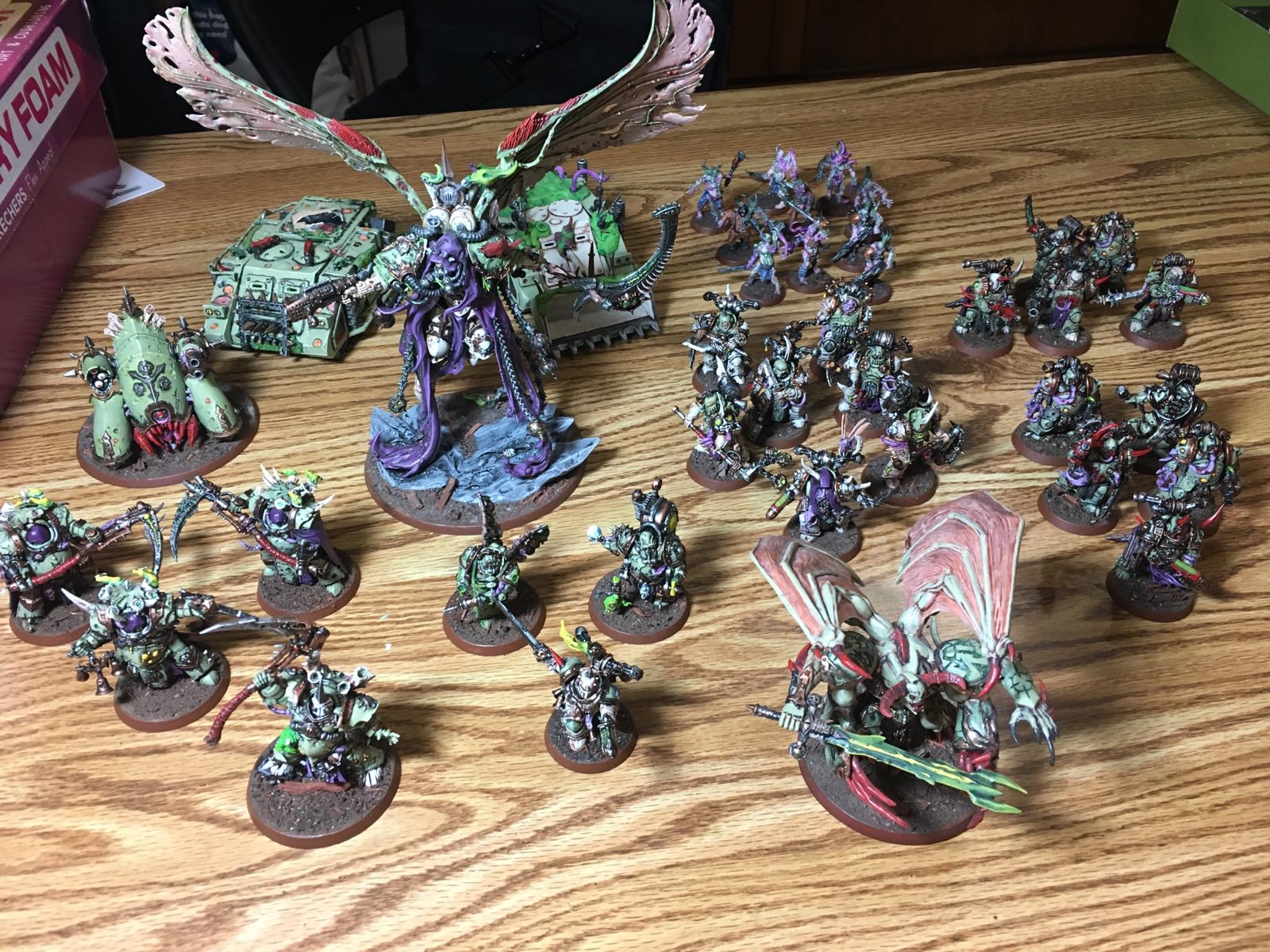 If I'm correct, I can start my 2 5 man squads in a rhino and my Poxwalkers within 3". Then at the beginning of my movement phase, disembark my marine within 3", embark my Poxwalkers, then move my Rhino as normal. I would have one less drop and my Marines would be 3" closer to my enemy or objectives.

My biggest complaint was that in the 3rd round, 2 guys never even set up their armies and somehow ended in a 30-30 tie. Cheaters if you ask me.

So the first game was against chaos, he had Necrosius, Typhus, Abbadon, Ahriman, DP of Tzeentch, 2 sorcerers, 4 units of Cultists (1of each mark), 2 units of Poxwalkers, and 2 units of nurglings. He killed my Poxwalkers and secured 3 of the 4 obj for most of the game. I had 1 unit of his Cultists down to 4 models and he redeployed them at full strength, next turn I had a unit down to 2 and he redeployed them. Then I had another unit down to 6 and he redeployed them. Final round I got a unit down to 3 and I failed to get them off 2 objectives which would have given me 6 victory point (with secondary missions) for a tie. It was silly I killed over 100 models and failed to get 1 victory point for all that.

Second game he had a fire prism, 2 dark reaper units, farseer, spirit seer, dire avengers, 2 guardian, wraith fighter, 3 vipers, shining spears, and a skyrunner. He took out my Deathshroud (whom saved Morty from many reaper and vehicles) and my cc squad after they took out his shining spears and skyrunner. I tabled him in 4 turns and held all the obj.

Third game he had 3 rub units in Rhinos, 2 units of 30 tzangors, 2 DP, a shaman, and a unit of 5 spawns. It took him 30 minutes just to set up. He killed off a unit of marines while I got a unit of tzangors, the spawns, and the shaman. We ran out of time after 2 turns and he had teleported to my deployment. Because he held more obj, he got enough points that we needed in a tie. 1 more turn and I could have tabled him, but he moved so slow.

I think free unit need to go in competitive. Cultist and pox should cost point to replenish if there is not gonna be another limitation.

How would you rate the performence of individual units in your list?
And did it play according to your expectation?

Everyone did what they were expected to with the exception of the Poxwalkers in game 1, but they died first turn. My army is very fast, low drop count, and very resilient. The Deathshroud kept Morty alive against the Eldar and all their missile/tank shots. Other then that I didn't lose but 2 units of marines all day. I did lose 1 of those to 30 tzangors and a DP, the other got blasted from reapers and a couple vipers. It really came down to mission vs opponent, any other mission game 1 and I believe I would have had him. He just had so many guys on each objective the he kept bringing back before I could kill them all.

Back to Death Guard Army Lists