216 replies to this topic

Just went through this thread and this is awesome work! I'm in love with the color scheme.

Who says I can't mix Sci-fi and Fantasy?

LOL.  Anyway, I think you may be of a different mind if I can get it to work right.  If I'm not happy with the result I'll just can the idea - no point converting models just to make them look worse.

Just went through this thread and this is awesome work! I'm in love with the color scheme.

Thanks!  I'm glad you like them.  And welcome to the forum!

LOL.  Anyway, I think you may be of a different mind if I can get it to work right.  If I'm not happy with the result I'll just can the idea - no point converting models just to make them look worse.

Just to clarify, I was responding to a typo you made in the quoted part.

And you are very correct.

I think I'll stick with tentacles instead.

Given that I'll be participating in this ETL from the Daemons subforum, I thought I should set up a thread dedicated to them.

It can be found here: http://www.bolterand...slanneshi-host/

Due to peer pressure from Captain Semper (http://www.bolterand...ming/?p=5317257) I have grabbed some of the sand from the garage (for sanding the walks come wintertime when it can be icy) and have begun basing my warband - so far just my cultists.  1/2 of them had been previously bases with pebbles when I had run out of sand, so involved gluing sand to just the bare patches of those bases (those are the front 2 rows). 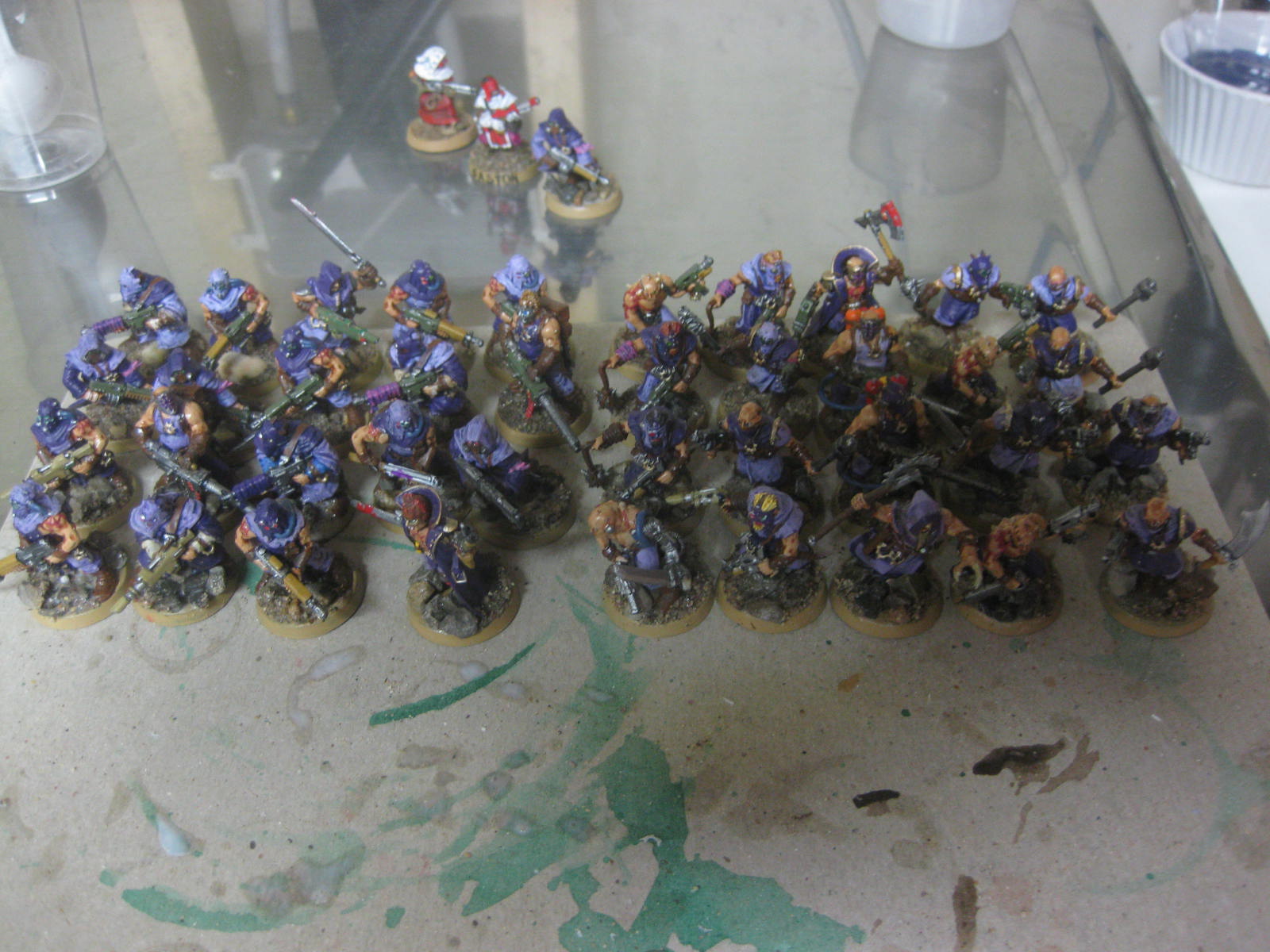 Did this last night when my wife wasn't looking - she's paranoid of me getting sand all over the place.

It looks good, a cohesive basing scheme really polishes off an army on the table top

Working on it - I'll post a picture of my army when I've gotten it all based.

Got distracted from basing by ETL - I only have my 18 bikes, 8 raptors, 10 chosen and a few characters left to do, I think.

Anyway, I thought I would share here my latest dedicated hobby thread for chaosiness, this time in the form of knights - http://www.bolterand...nahuis-knights/ .

Just finished my last vow for this ETL, and it actually was a (kind of - its in our revamped codex) - a Noctilith Crown.  So I'm sharing it here. 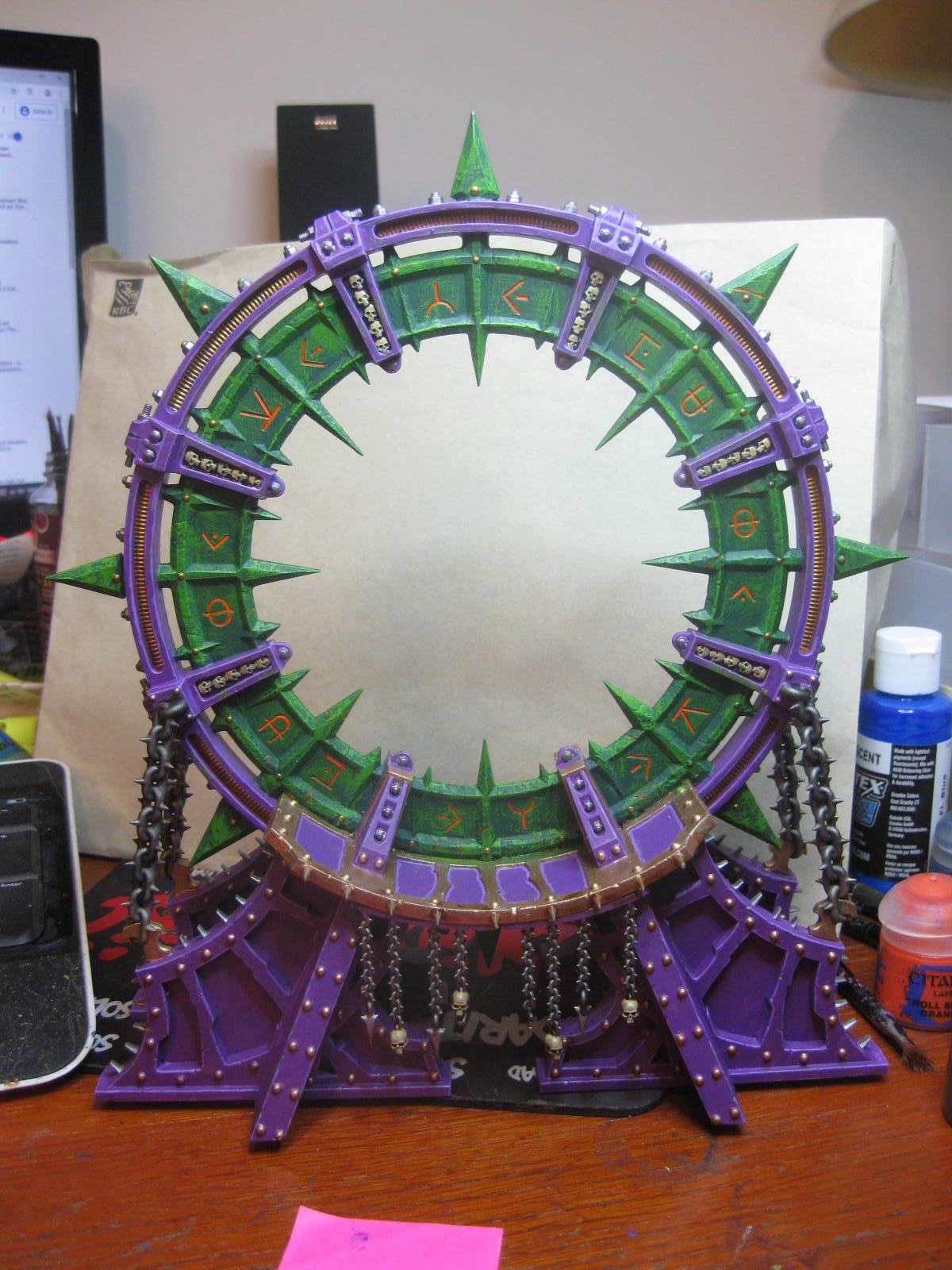 And just so those of you that don't frequent the daemons board know what I've been up to this ETL, here's a picture of my 4 vows together - basically a bunch of slaaneshi demons, a knight and the crown. 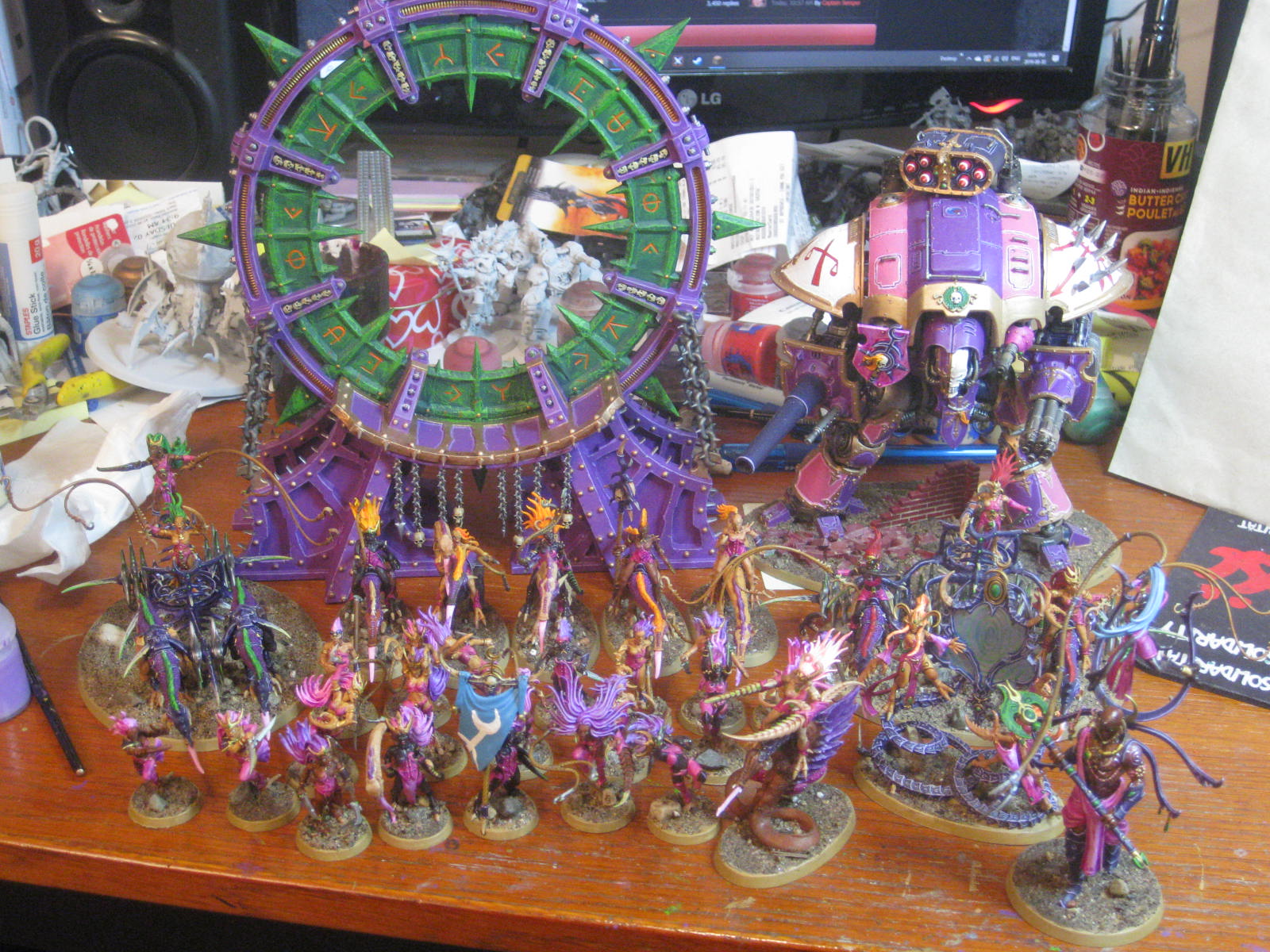 So, next up in my painting queue is the venomcrawler - at the moment, I'm trying to figure which parts of the model to paint as flesh and which I won't. 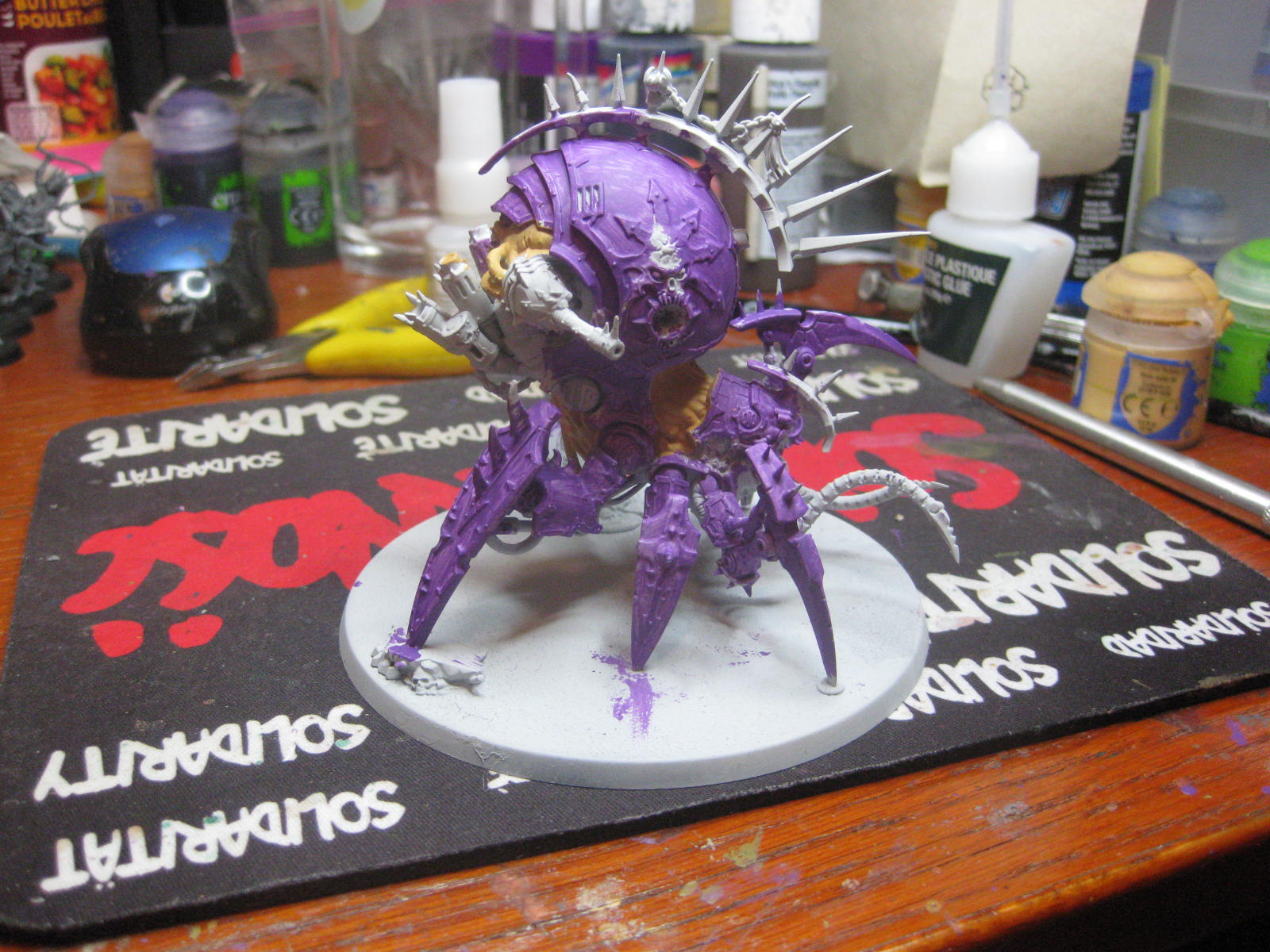 Put some more work into the venomcrawler - gotten past my least favourite bit, which was painting all the gold retributor armour.  Man, I really don't like that colour - it goes no smoothly, but its just so ugly.

Next up was a dry  brush of griffon gold, which unfortunately means I need to then clean up everything around it as I have yet to figure out a way to only get it where I want it - its one of GW's drybrush paints. 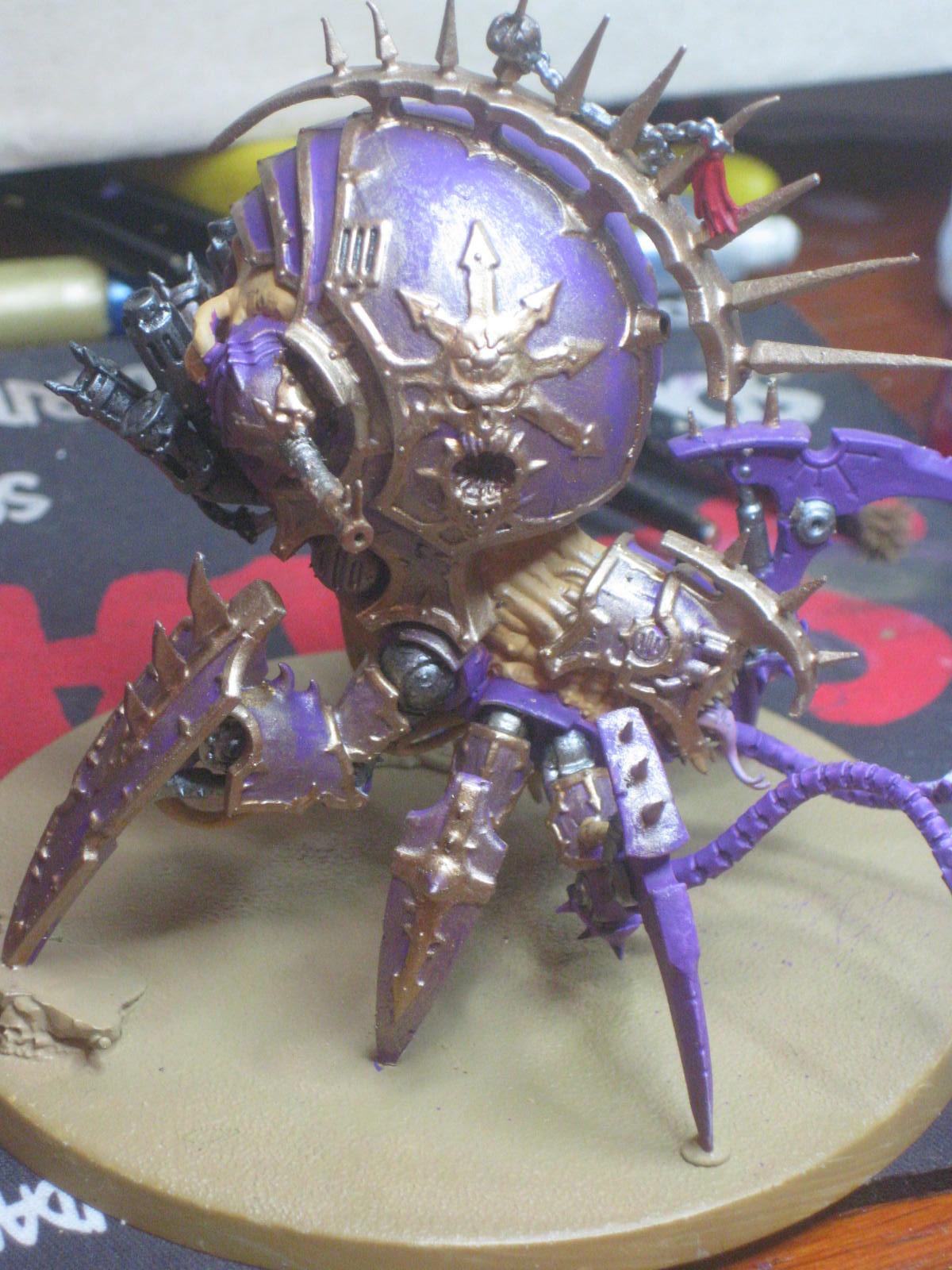 Here's the other side where I have done that clean up and a few other details.  Despite the above, I'm pretty happy where I've gotten it - though I may give it a light Rieklander ink later. 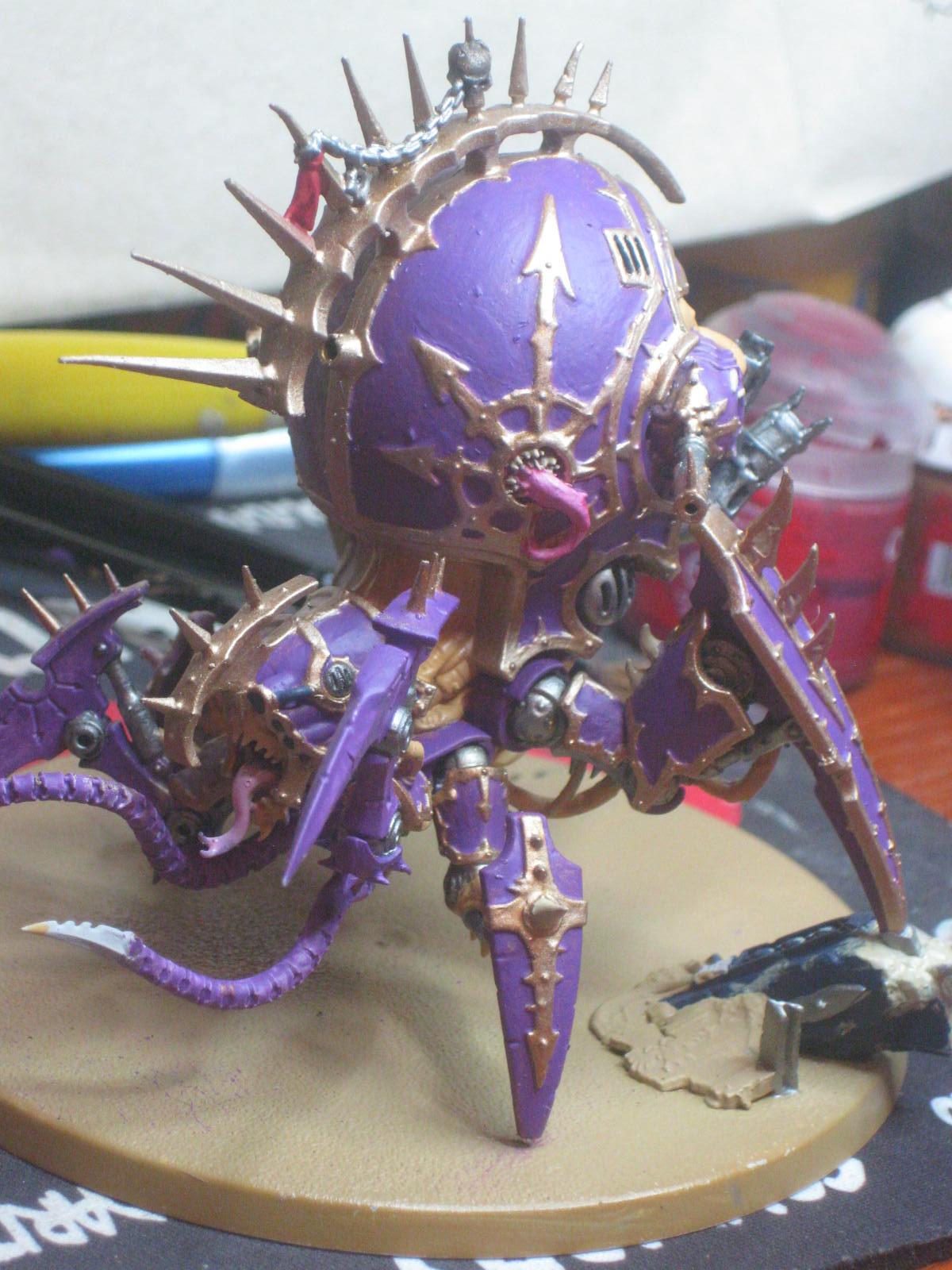 Looking at the photo, I see some places (the sides of the arrows, for example) where I put purple paint over where I didn't want it - luckily I have some of the old griffon gold to do the touch ups... not sure how I'll do that once the old bottle runs out.

What makes using the "new" (its been out for a while, I just haven't needed to use it before) griffin gold so frustrating is that it used to be like a regular paint, even though it was labelled as a dry brush.  Here is the venom crawler next to my forgefiend, done with the old griffin gold. 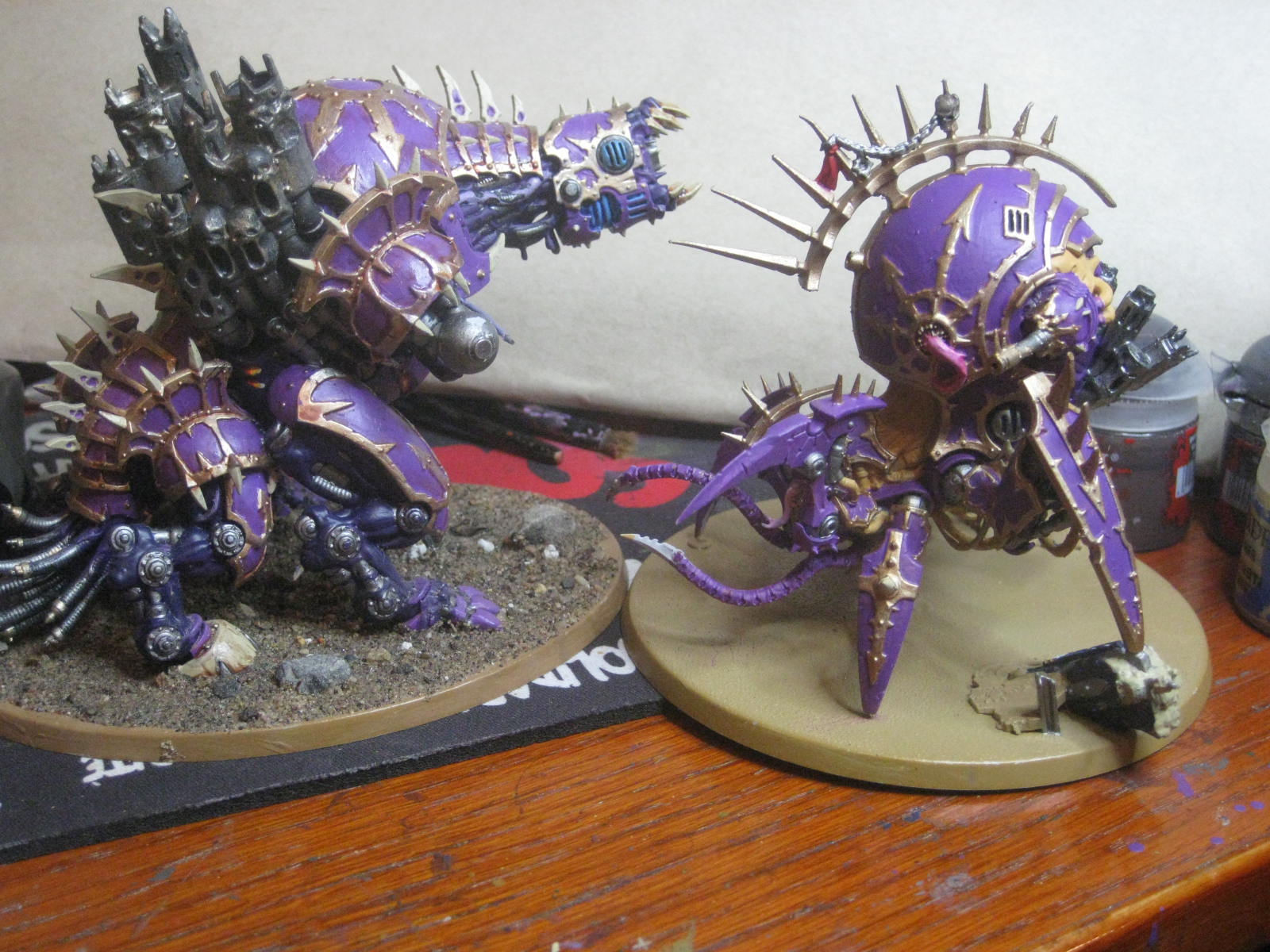 Luckily the effect is still pretty similar (the forgefiend does have a rieklander ink, which is why it has a bit more definition).  Still, its frustrating that it takes 4x longer than it used to...

The Venomcrawler is coming along nicely.

It looks like you painted a little bit of blue as accent color on the Maulerfiend's head. Do you plan on using a bit of blue on the Venomcrawler's head too?

You're a skilled painter. The vibrant colors will surely please the Prince of Pleasure.

I hadn't realised how good a model the Venomcrawler was, looking good!

The Venomcrawler is coming along nicely.

It looks like you painted a little bit of blue as accent color on the Maulerfiend's head. Do you plan on using a bit of blue on the Venomcrawler's head too?

The blue accent on the Forge Fiend's head is because the head is actually an ectoplasmic cannon, which is basically a more chaosy plasma cannon.  So I hadn't planned on bringing any blue into the Venom Crawler.  The only spot colour I had planned on was green for the lenses and some white in the chaos star grooves on the front claw.

I had also thought of putting my legion symbol (red scales on a white background) somewhere on the model, but haven't figured out where yet.  One problem with all the detail is it doesn't leave any nice big empty spaces for further iconography.

You're a skilled painter. The vibrant colors will surely please the Prince of Pleasure.

Thanks!  I've only seen the venomcrawler done in red or black, so I'm happy its turning out so nicely in purple and gold.

I hadn't realised how good a model the Venomcrawler was, looking good!

Yeah, its a really nice model - shame it seems to be one that has largely been passed over by players and painters.  Surprisingly, other than as part of ETL, I think I'm the first to post their pictures of one here.

One thing, if I paint one again, I may paint the bottom before glueing it to the base - there are a lot of little crannies in amoung the legs that can be hard to reach but are visible if you look at the model closely.

Some people shade gold with purple so that might be a nice thing to try since you could do one coat of druchii violet over the whole area while with reikland you have to be careful to keep it away from the panels. Only issue is that with non-gloss or ink washes on metal you generally have to go over them again with a final highlight of metalic but I'm sure someone sells gloss purple ink that might be worth experimenting with.

Just a little shading around the trim would add a lot of definition.

Hadn't thought about using druiichi over the gold - I'm worried that it would make the entire model too purple by making the gold less of a contrast.  I'll have to try it out on a portion that would be easy to repaint if I don't like the effect.

That said, I was planning on using druichi on the cracks and scrapes, and could use it at the edges of the trim as well.  In any case, I do plan on doing some highlights to the purple, which might also help giving it more definition.

Thanks for the advice - I guess we'll all see how things go.

I love using Druchii over gold on my World Eaters. But, as you note, try it out on a test basis before committing.

Art-theory wise you want to tie colours together so outside of the whole Slaanesh thing worrying about pale gold and purple not contrasting enough is unnecessary. Light wise some of the purple would reflect off the metals anyway.

Did a little more work on my venomcrawler - painted some but not all of the purple on the other side. 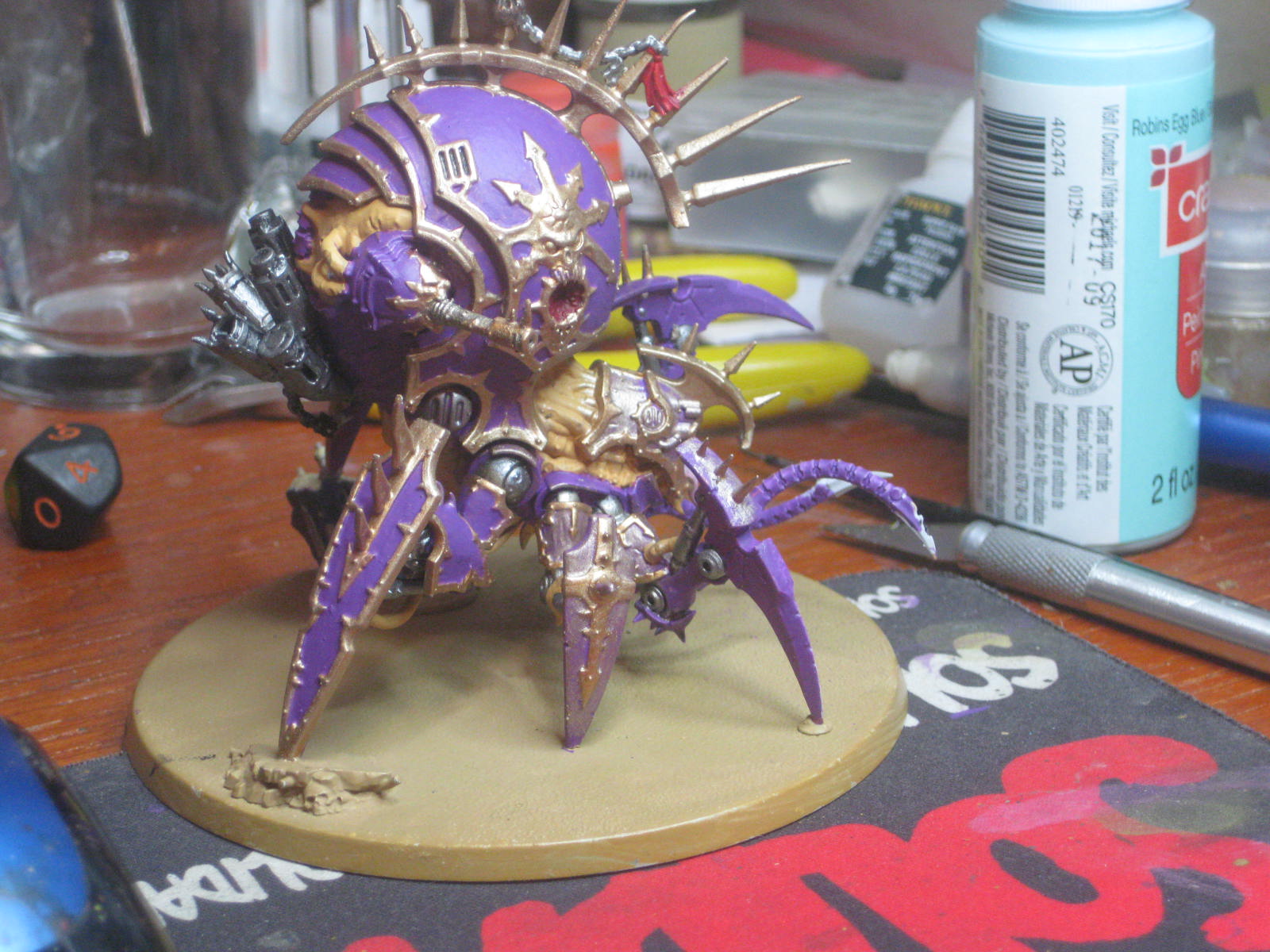 When I've done cleaning up all the purple, I will try comparing the various washes (1) reiklander, 2) druichi and 3) reiklander + druichi) on the gold.

The reason I didn't get more done is that I ended up scheduling my first game with my daemonettes, for which I wanted to get my last unit of daemonettes more presentable.  So that's what I've mostly been painting instead.  You can read more about that here: http://www.bolterand...host/?p=5389743

I'll likely finish that unit before coming back to the venomcrawler.

In the meantime, I thought I would share pictures of my forgefiend that I used as an example above - this time with weapon arms attached. 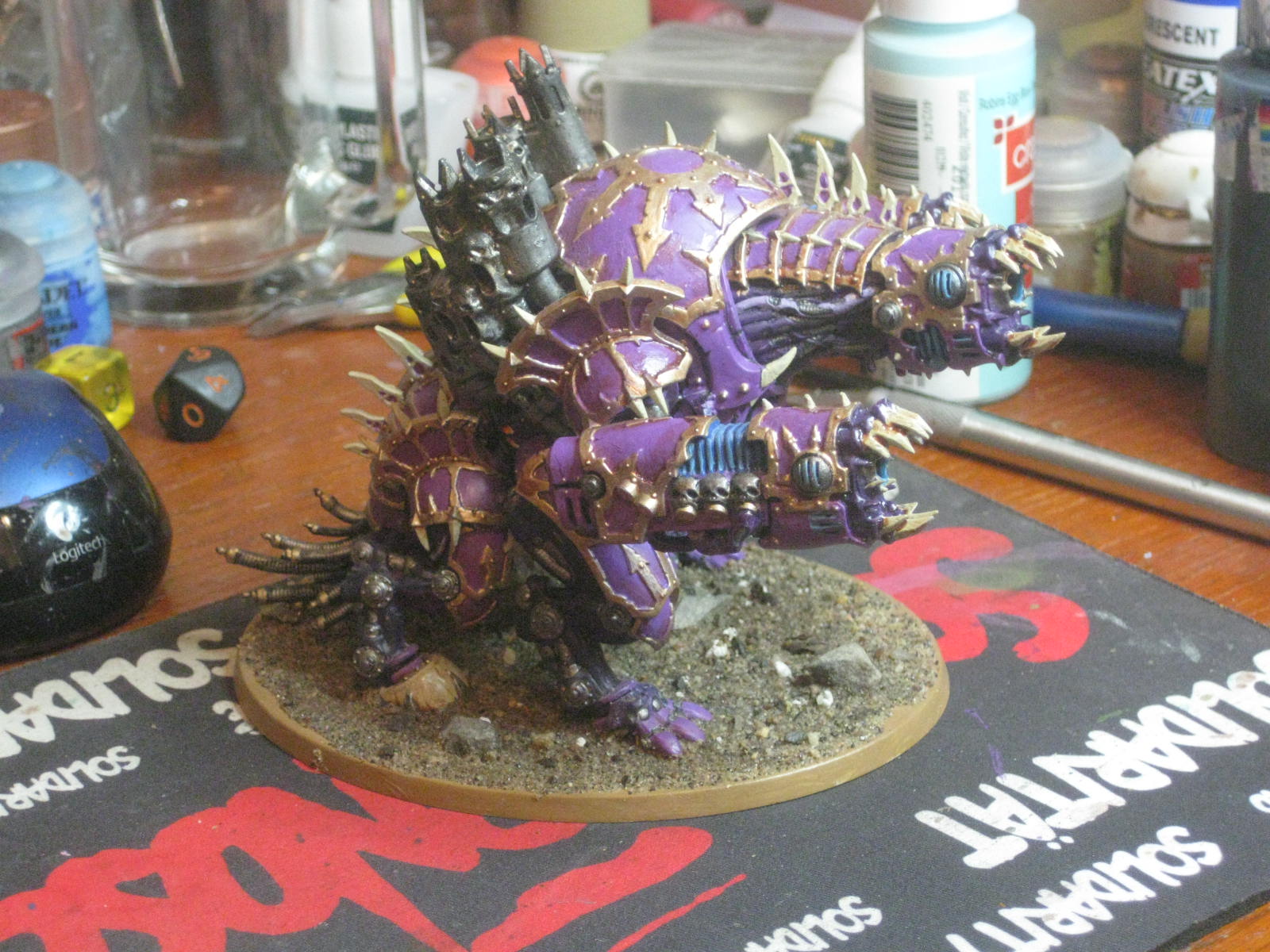 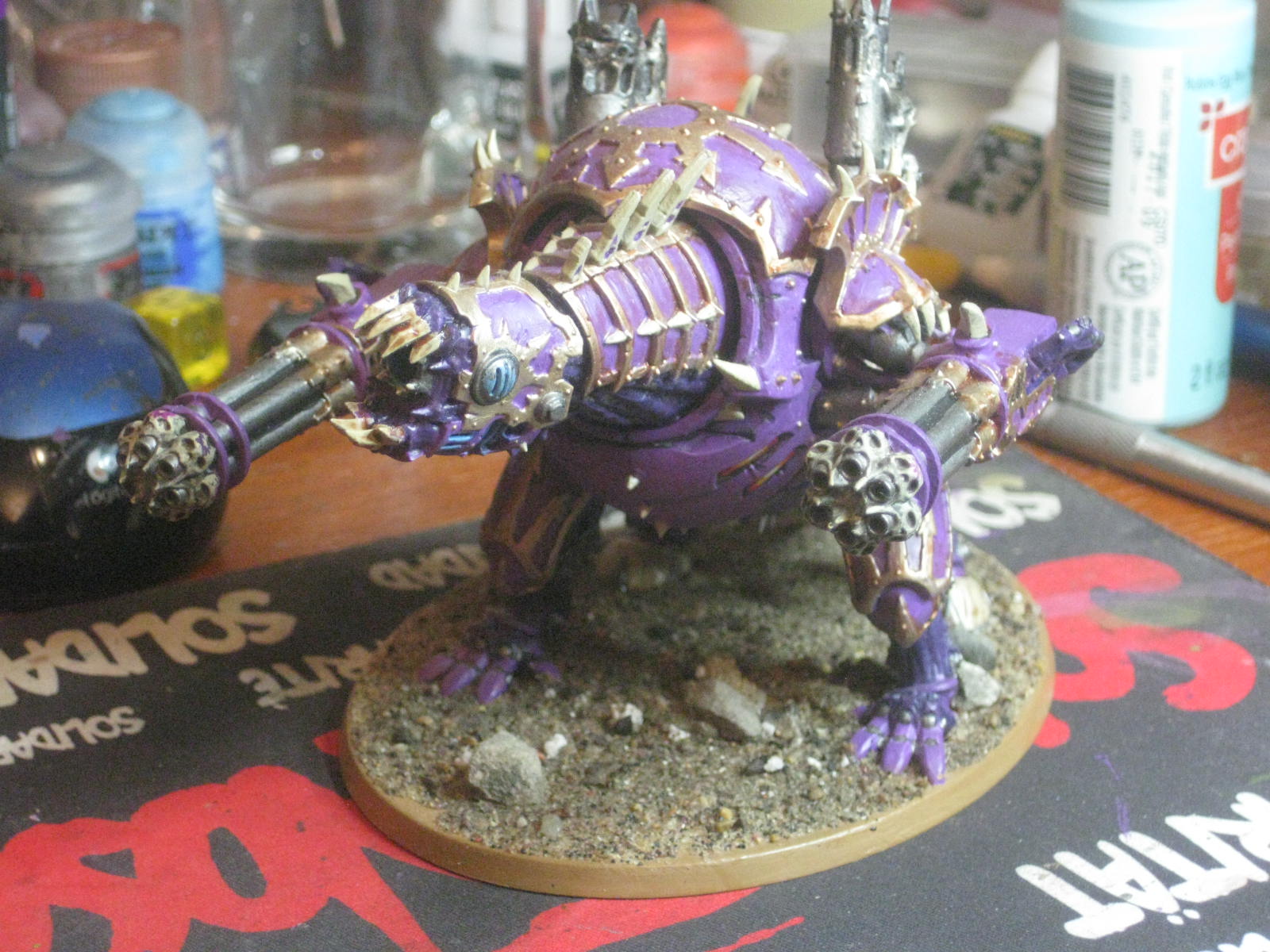 Really amazing painting and conversions! The green on the claws and weapons really makes the character with the color scheme you got. Really cool!

Thanks!  I'm glad you like them.  This is the first army where I've done coloured power weapons, and I chose green because it would be the biggest contrast.  Anyway, I'm glad I did because not only does it look good, but according to Disney (or at least according to my friend, who is a Disney super-fan), glowing green is always  bad.

Finished painting my venomcrawler -  still have to base it though.  Really happy with it and hope you guys like it took.  I 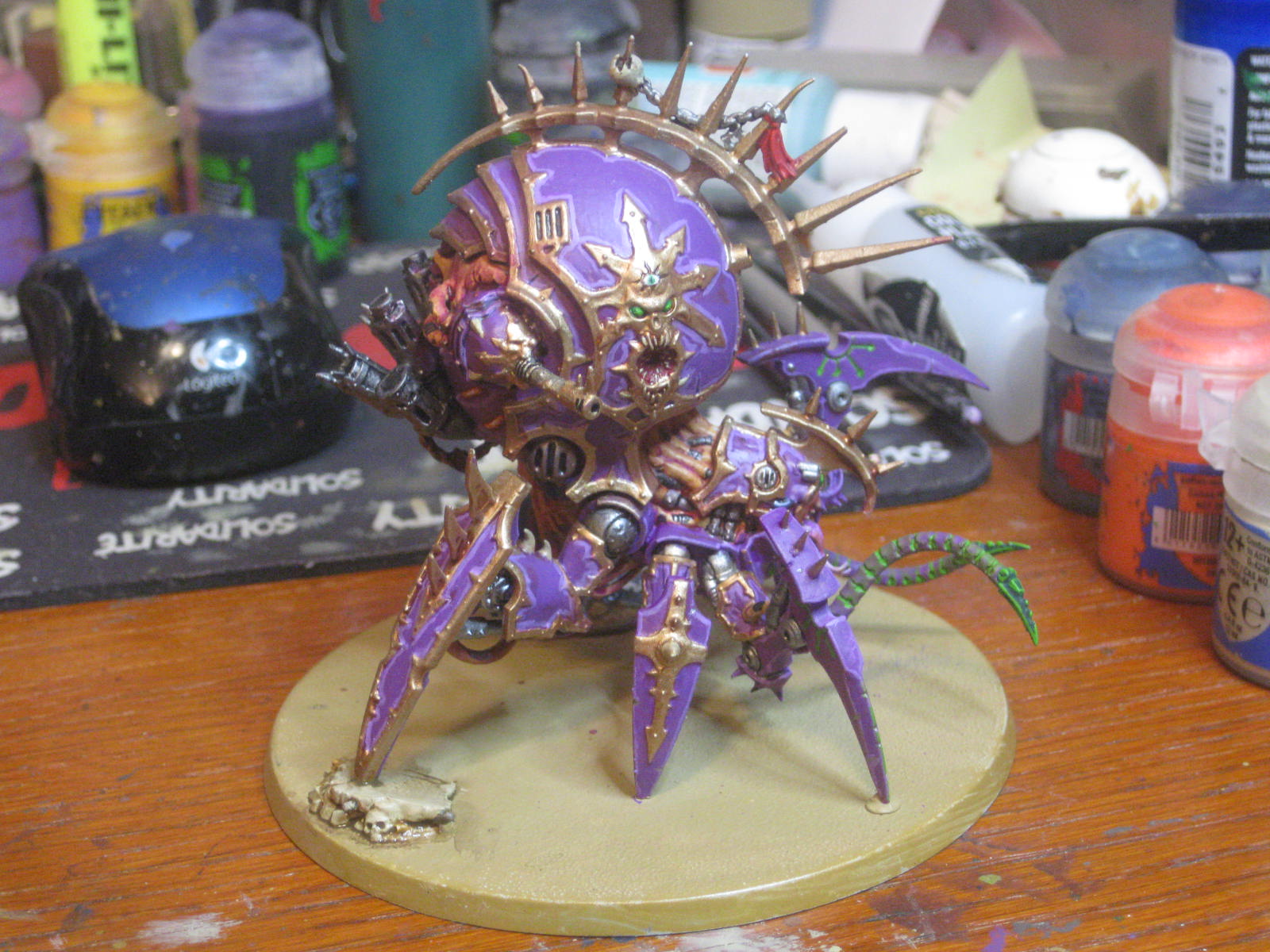 I  tried out both Nuln and Druichi inks on the gold, but found I liked Reiklander best for these kind of large surfaces.  I'm going to keep Druichi in mind, though, for when I want a starker border between the trim and the armour - I'll likely use it for my retro noise marine.

Next up are my obliterators.

Also tagged with one or more of these keywords: emperors children, conversion, dark vengence